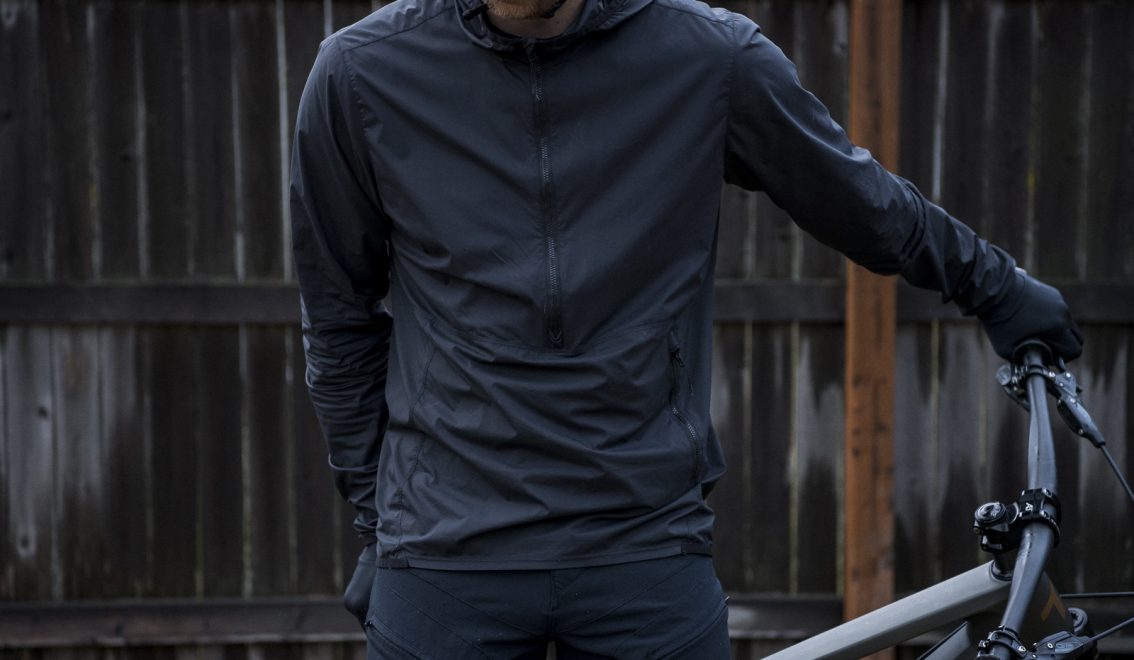 As the weather began to cool off Specialized sent us a few samples of their apparel for testing. One of those pieces of garb that I’ve been wearing on most of my rides lately has been their Trail-Series Wind Jacket – a stretchy and breathable half zip shell. Intended mainly to be a layer that will ward off the cold by preventing wind from cutting through, the jacket is rated as water resistant but not waterproof. As it falls on the more minimalist side of things, unsurprisingly it’s very compact and stashable. Read on to see how it’s been working out… 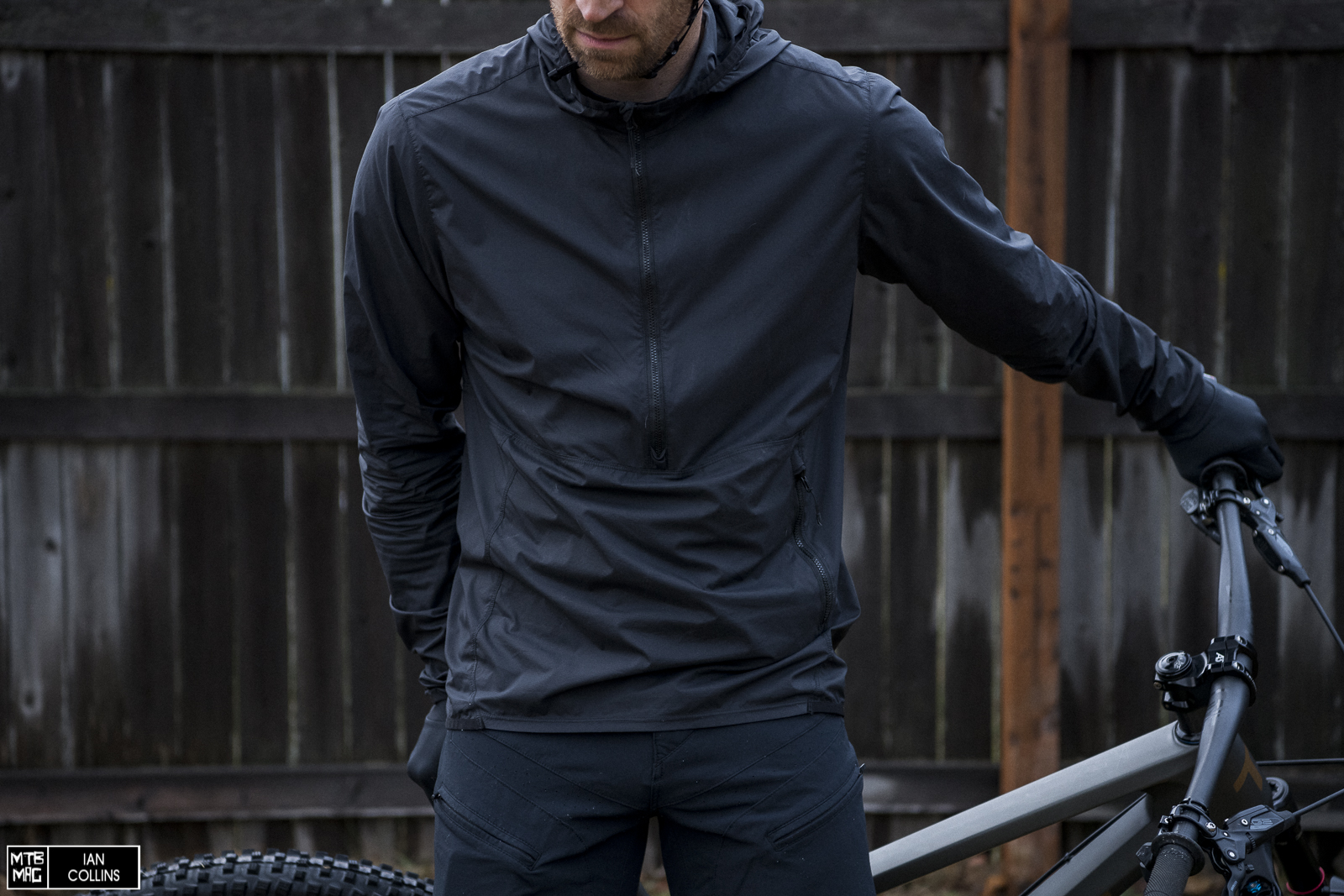 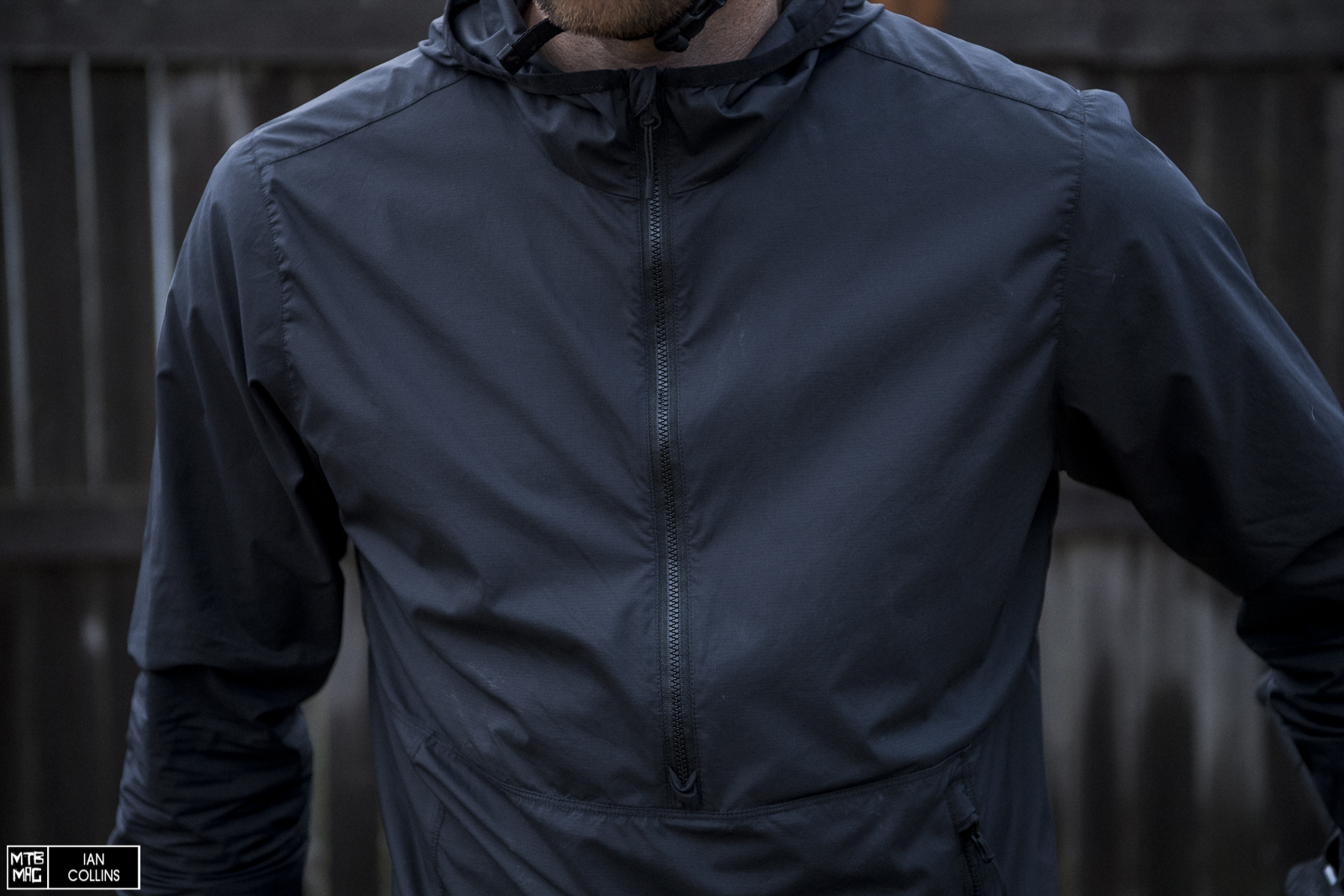 Central to this jacket, as well as a couple of other offerings from Specialized this year, is a half length zipper, making it a pullover rather than a standard jacket. 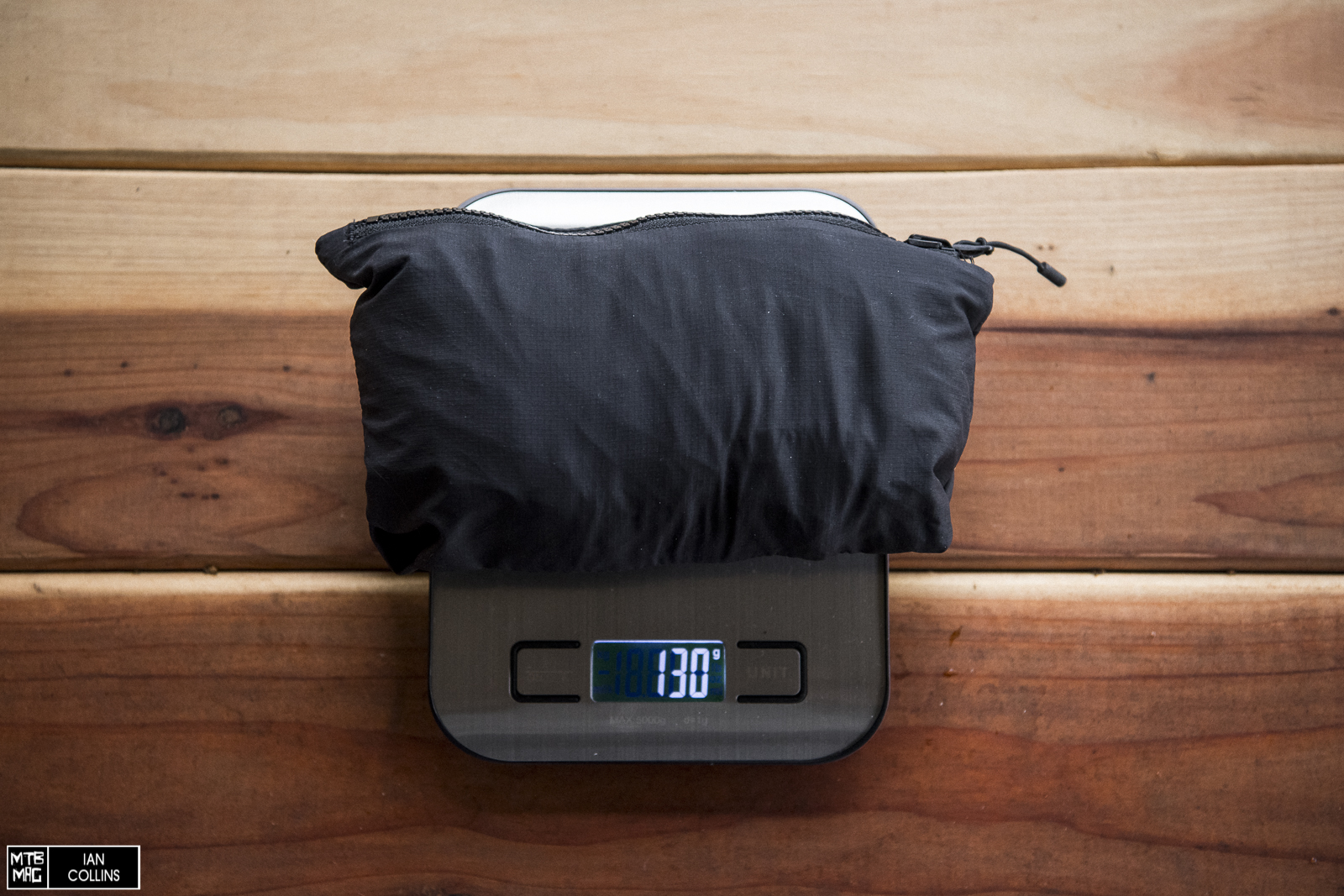 The singular left side pocket turns inside out and then stashes the whole jacket in a tidy package. Our size Large weighted in at just 130 grams. 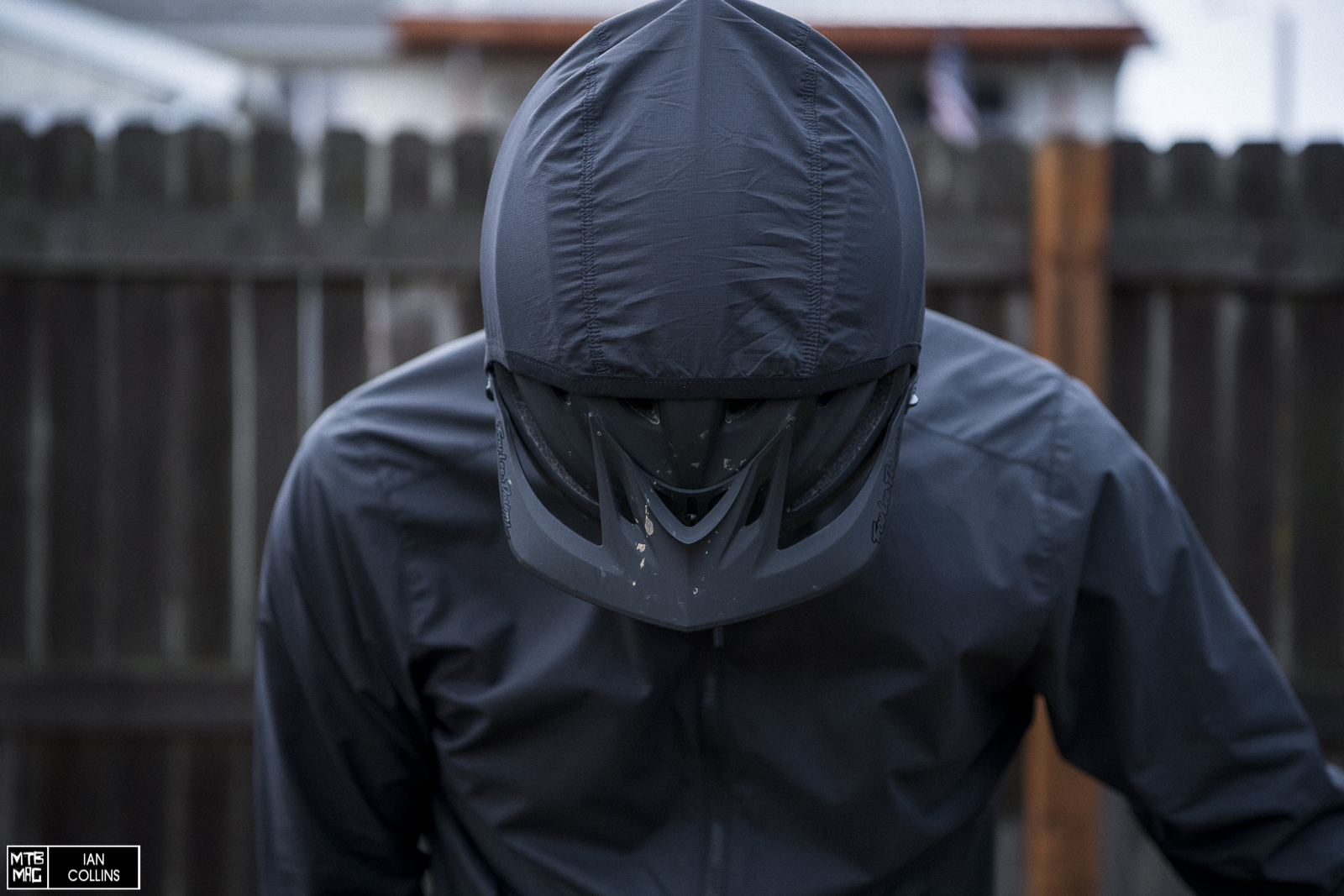 The hood is not adjustable, although it does have stretchy piping around the outside. It fits snugly over the helmet. 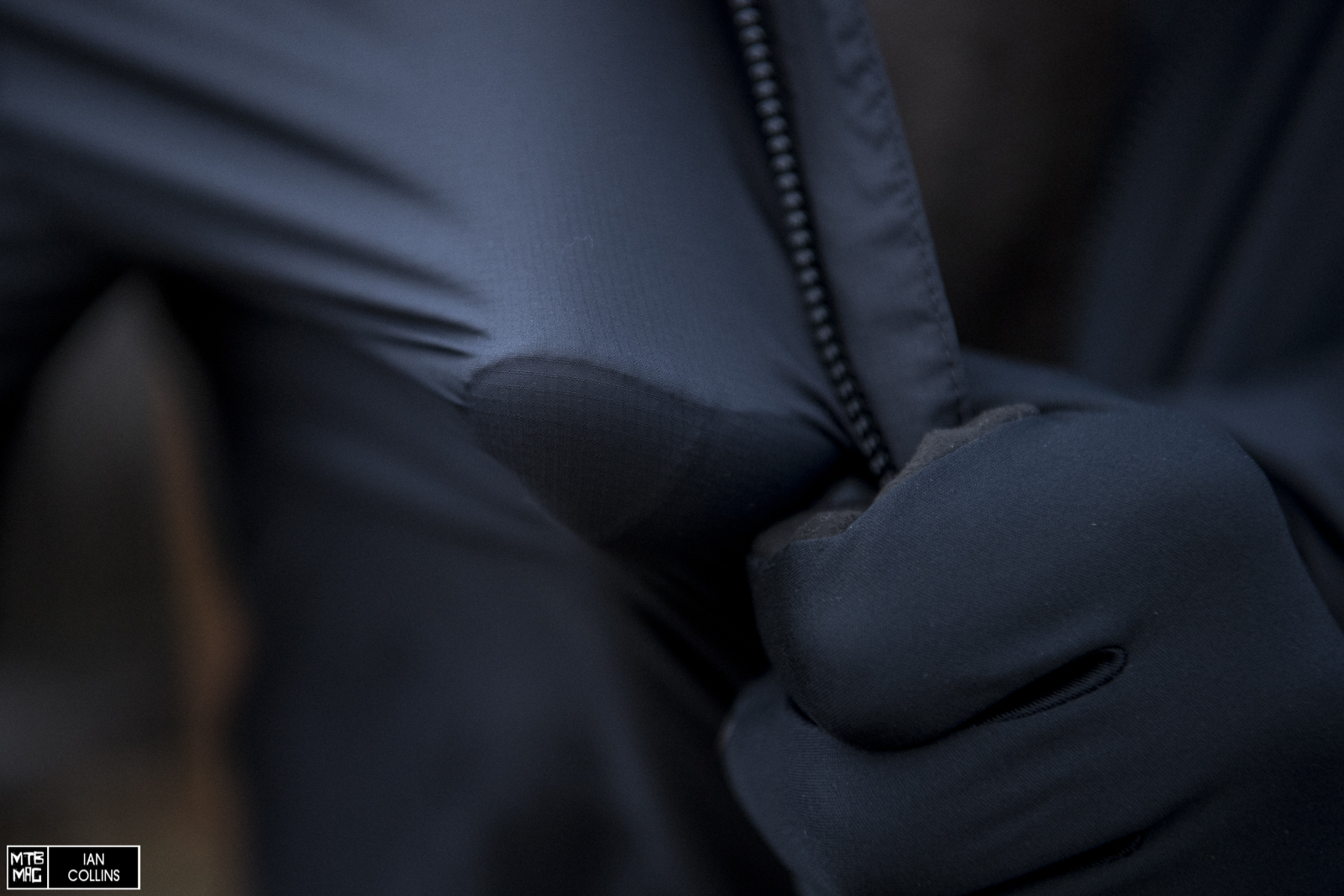 Hats off to Specialized for using fully recycled material. The ripstop nylon has a good bit of stretch to it, as you can see above. 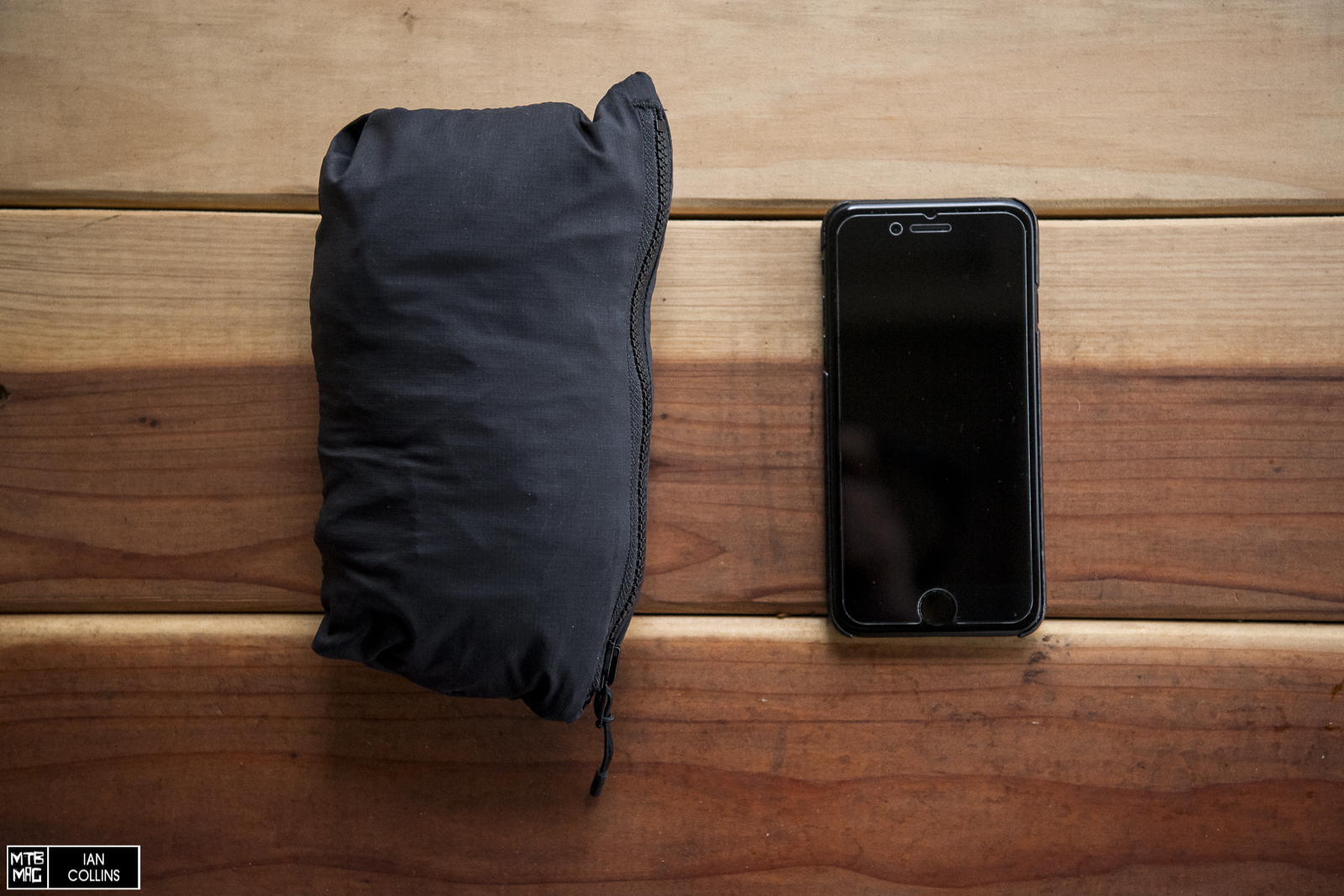 All zipped up, the jacket fits inside of a SWAT downtube, no problem. Above and on the right is a smaller sized iPhone 8 for the sake of reference. 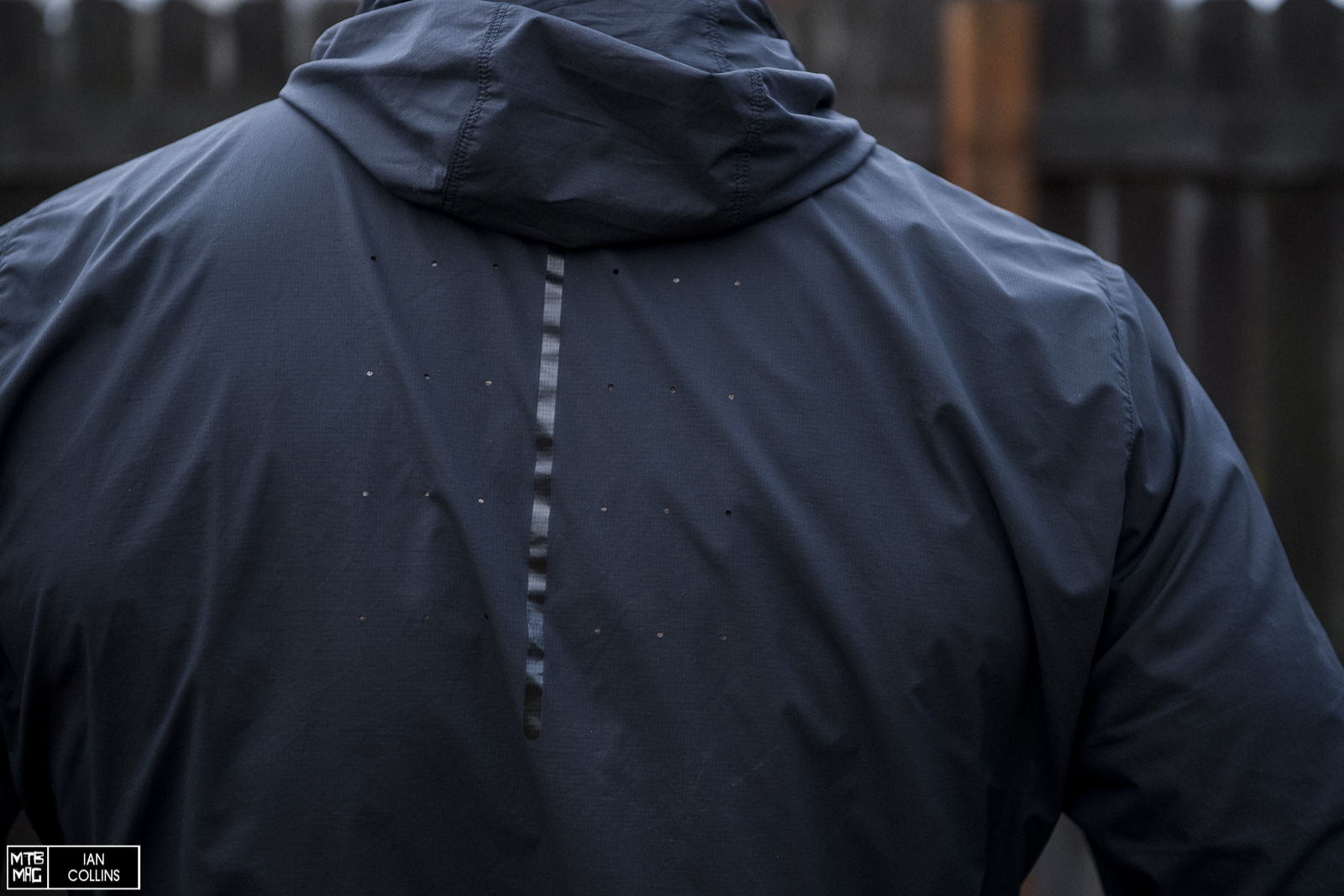 Lastly, on the back are a handful of perforations to allow heat and moisture to dissipate located right above where it tends to gather.

Beginning with fit, I found the sizing to be accurate with the Large fitting me perfectly – at 6 foot tall and 180 pounds it should. The cut is just right in my opinion. It’s loose enough that there is breathing room, but it isn’t baggy. That also means that there is still air space if you layer up with something like this under your go-to jersey. Another aspect that we could file under “fit” was the stretchy nature of the material. Between that and the fit, your movement is totally uninhibited. As far as duty is concerned, true to the name it’s a wind jacket. I found it to be ideal for cold, brisk days where there wasn’t much more than very light rain or snow. It’s ideal as a 3 season outer layer that cuts the wind chill and keeps you warm. I used the Trail-Series jacket with everything from a 3/4 sleeve jersey to a long sleeve combined with an under layer. On days that it was downright nasty outside I’ve been wearing another jacket from Specialized which I’ll share my thoughts on in the coming months. 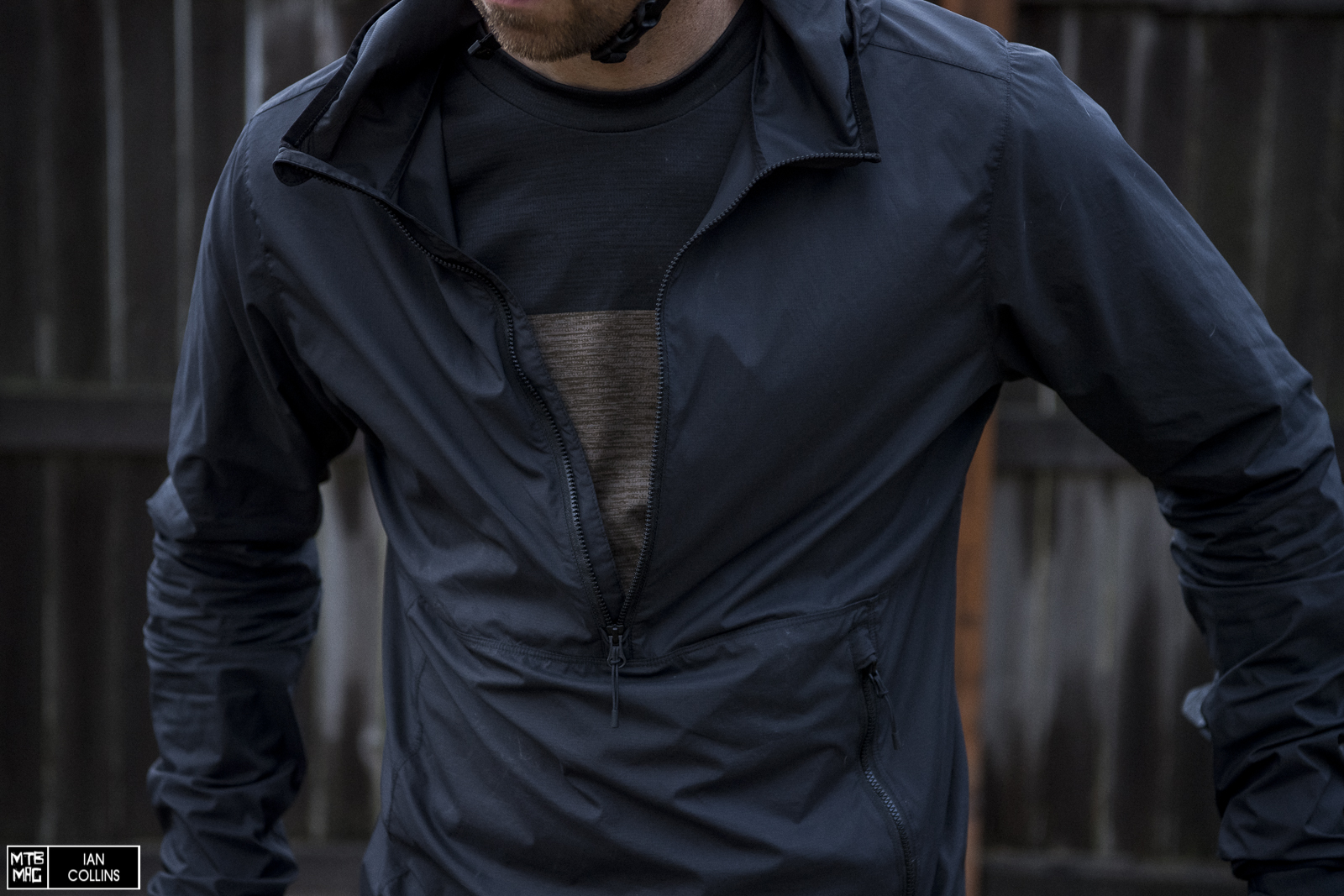 I initially thought I wouldn’t be that fond of the half zip construction as when I start to get hot, I like to ride with my outer layer unzipped and open. My concerns that it wouldn’t let enough heat and moisture escape from only unzipping halfway were put to rest on the first ride. In actuality it grew on me…The half zip is easy to open and close to your liking with one hand while riding in large part due to the somewhat bigger teeth in the zipper. Personally I find that very fine teeth can make a zipper cumbersome and quite annoying to operate quickly, so this was an upgrade over some other jackets I’ve used. Anyhow, I also liked that it’s easy to take the jacket off while still wearing a helmet. It’s compact enough to stash away into your pants pocket or your bibs as well. On the topic of stashing, the singular pocket is just right for an ID and a car key, but not much more and that’s alright as most riders likely prefer their phone and snacks in their pants anyway. Lastly, while you can deploy the hood over your helmet, it does fit very snugly. I found that it wasn’t bothersome when I was grinding along on a climb, but I wouldn’t want to have it up on a descent as it would limit range of motion. For the purpose of keeping extra wind out when you’re moving at a slow pace however, it did serve the purpose of adding a little extra protection.

If you’re in the market for an outer layer to keep the wind at bay and ward off light precipitation without overheating, this is a winner. At $125 it is priced accordingly – it’s not a mind blowing bargain, nor is it a rip off by any means. If you haven’t considered a half zip style jacket for mountain biking, perhaps it’s worth a try as you very well may like it. It certainly has won me over and it has quickly become my go to shell this Winter. 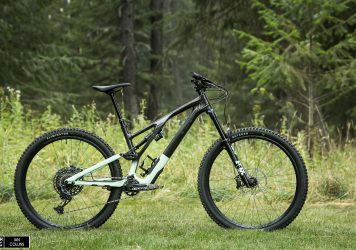 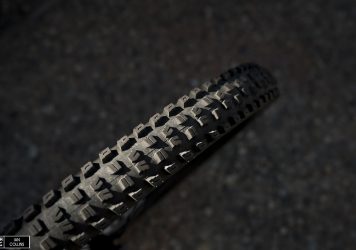 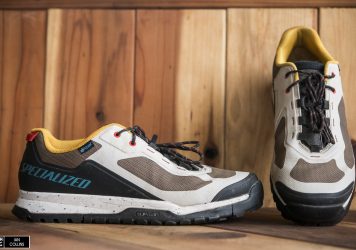