Shortly after launching a freshly updated aluminum Patrol and an all new model dubbed the Spire, Transition Bikes sent me the latter – a full 29″ bike with 170mm of front and rear travel. The “Nimble Bruiser”, as Transition aptly calls the bike, is available in both carbon fiber and aluminum featuring adjustable and rather aggressive geometry. I’ve spent the last few months on the “GX Alloy” model, which sees a very high value spec for its $4,899 price tag. Have a watch through the video below, or read on for the long form version of the review… 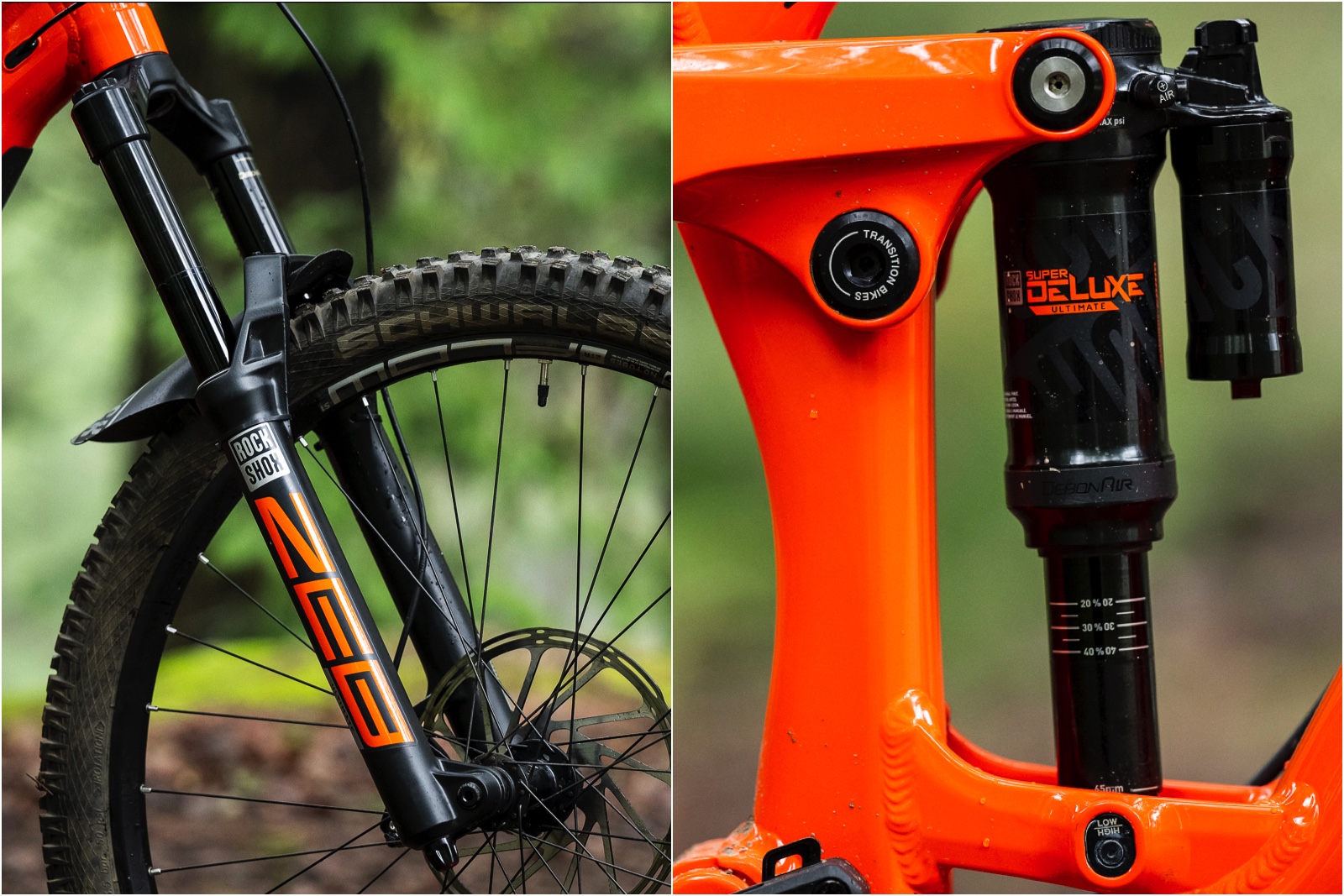 Beginning with suspension, despite that this bike is not a flagship offering, it does feature a top end fork and shock from RockShox with a Zeb Ultimate RC2 and a Super Deluxe Ultimate RCT with adjustable low speed compression, plus rebound and a lockout. The drivetrain is 100% comprised of SRAM’s Eagle GX drivetrain featuring a massive 520% range via its 10-52T cassette. The Spire features a 30T chainring rolling on short 165mm aluminum cranks. All in all, this drivetrain performs at about 99% of the level as SRAM’s top end Eagle drivetrains, but it just comes along with a bit of a weight penalty. In short it offers up quick, decisive shifting, loads of range and solid durability. 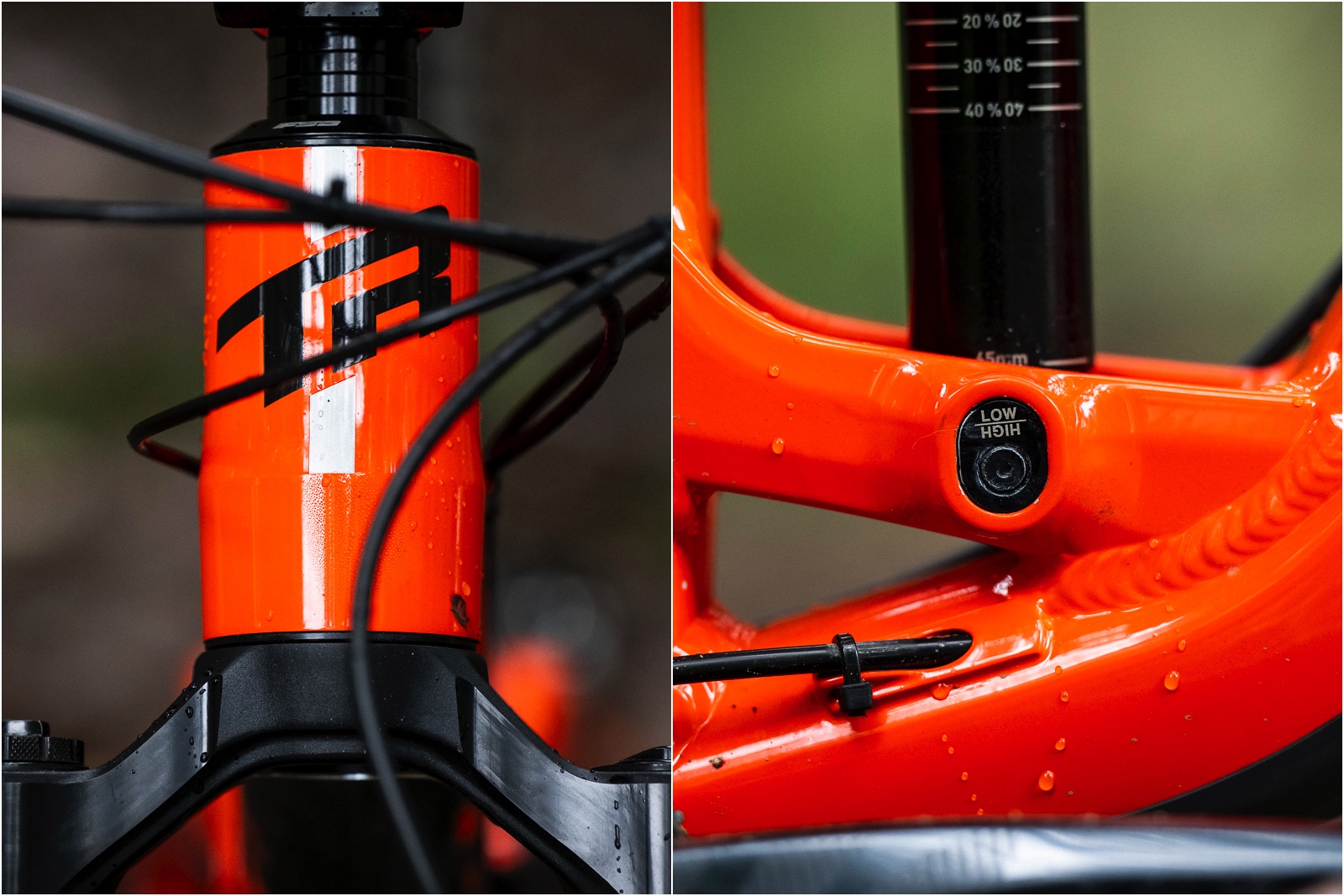 The Spire provides a high degree of adjustability. Its straight 1.5″ head tube means that you can utilize FSA’s adjustable headset for a steeper or slacker angle, should you choose. It also has a simple flip chip at the lower shock mount, which means that with a single 5mm allen key and about 2 minutes time you can flip between a low/slack and a high/steep option. This adjustment equates to a .5º change in head tube / seat tube angle and a 7mm difference in bottom bracket height. 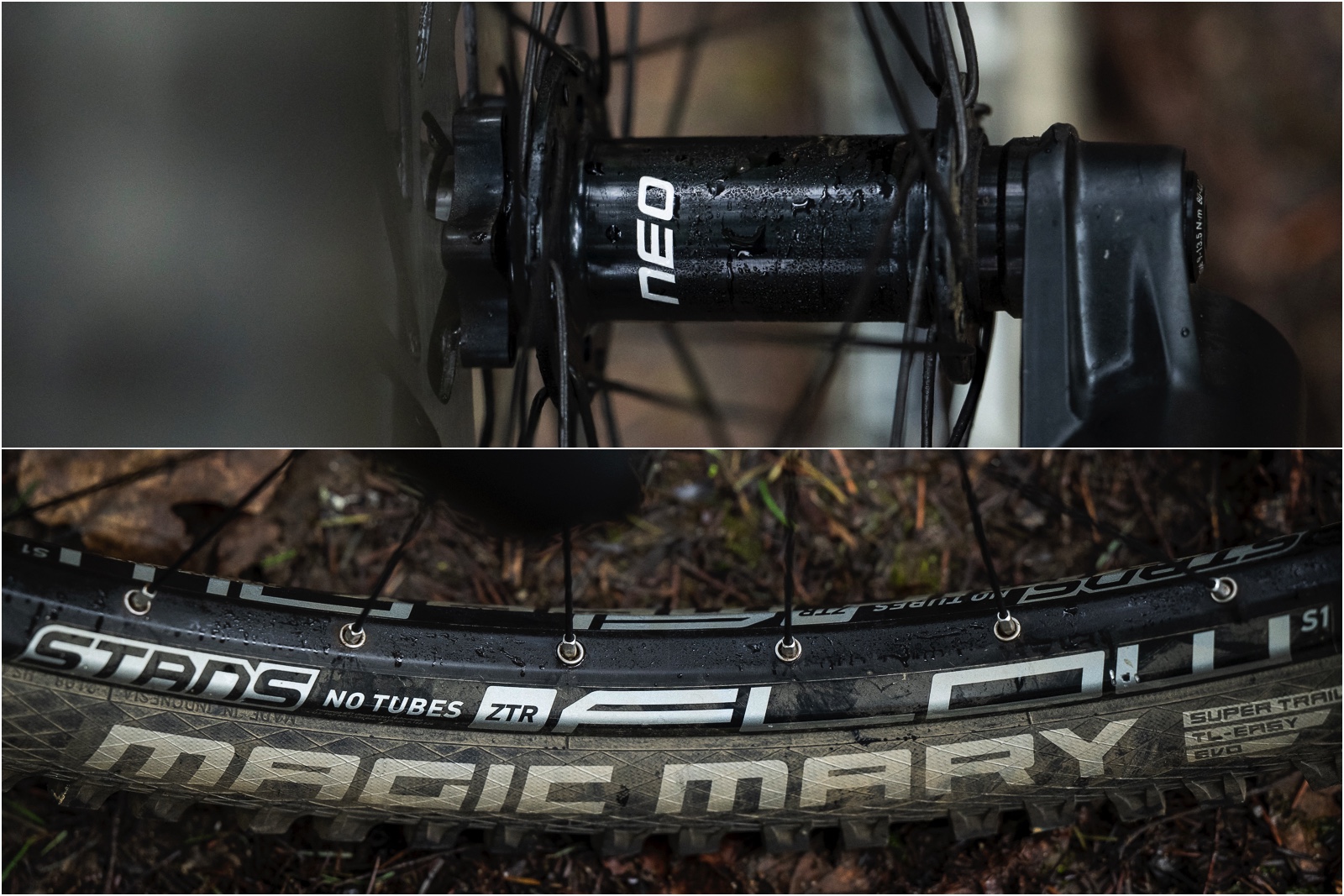 Transition opted for a set of Stan’s ZTR Flow S1 wheels. Every time I get a test bike with Stan’s I’m impressed by their no frills nature and solid strength:weight ratios. This was no exception and extra props to them for offering “Torque cap” style end caps in the front hub to mesh nicely with the RockShox Zeb and provide some added stiffness. In my test period I haven’t flatted or dented the rims, nor have they gone much out of true. 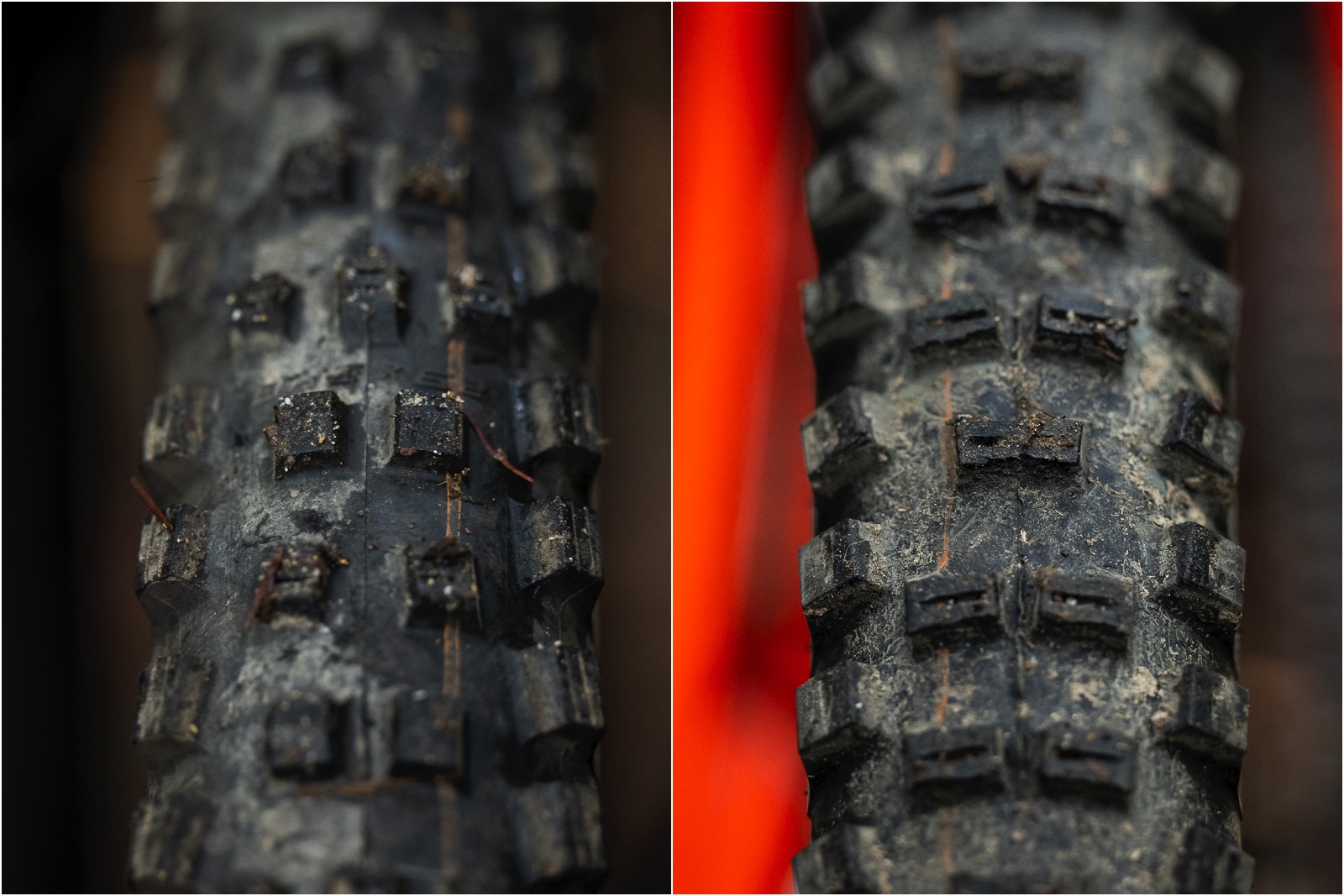 The wheels are wrapped in set of tires that are ultra versatile in more ways than one. We’re talking about the Schwalbe Magic Mary front / Big Betty rear combination. Both tires have the “Soft” compound, which strike the perfect balance between grip and durability – at least in my opinion anyway. They also feature the recently updated and more reinforced “Super Trail” casing. While I think that casing is quite tough given its weight, for a bike this heavy duty, I’d like to see an even beefier “Super Gravity” casing out back. All told, that’s a minor quip… 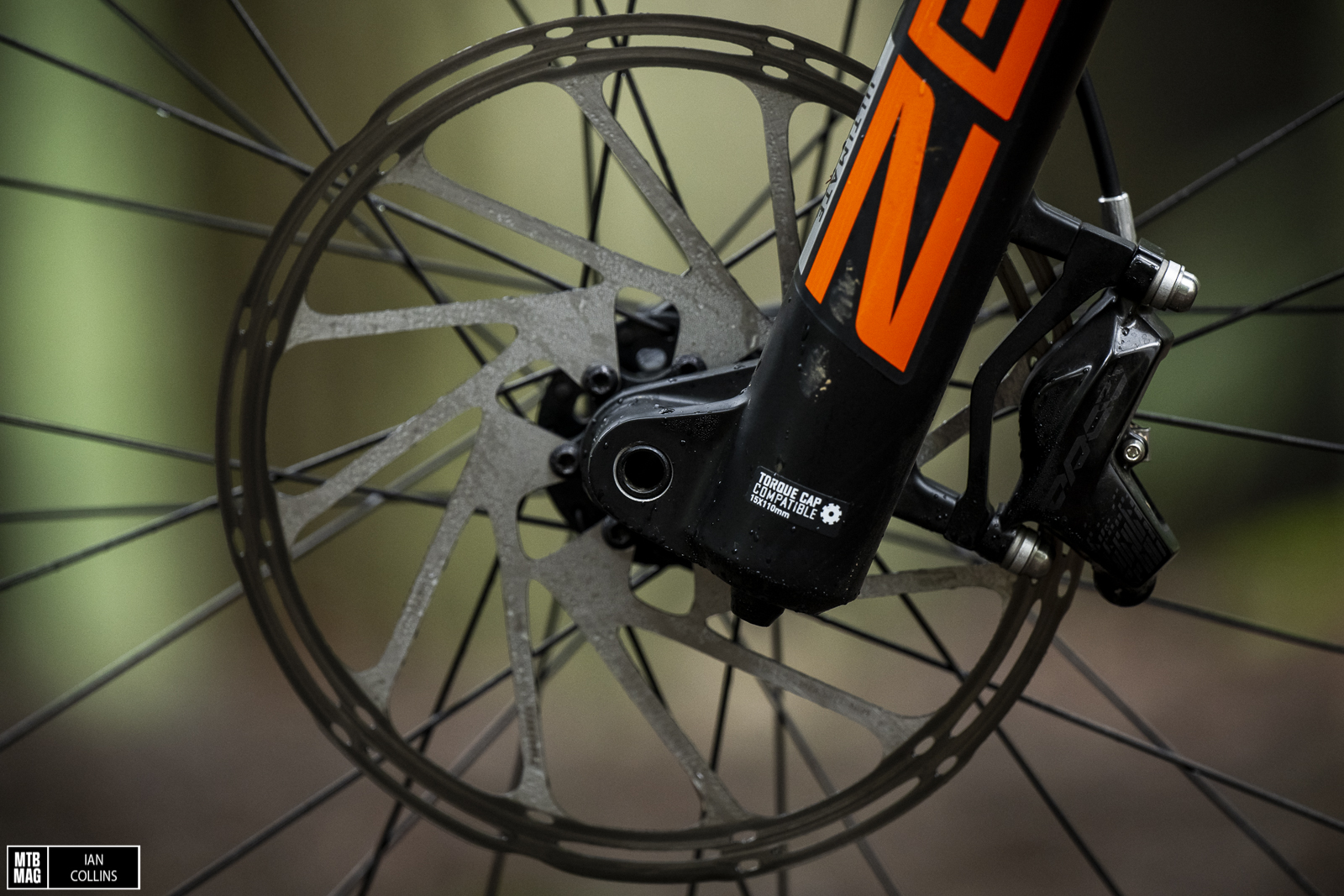 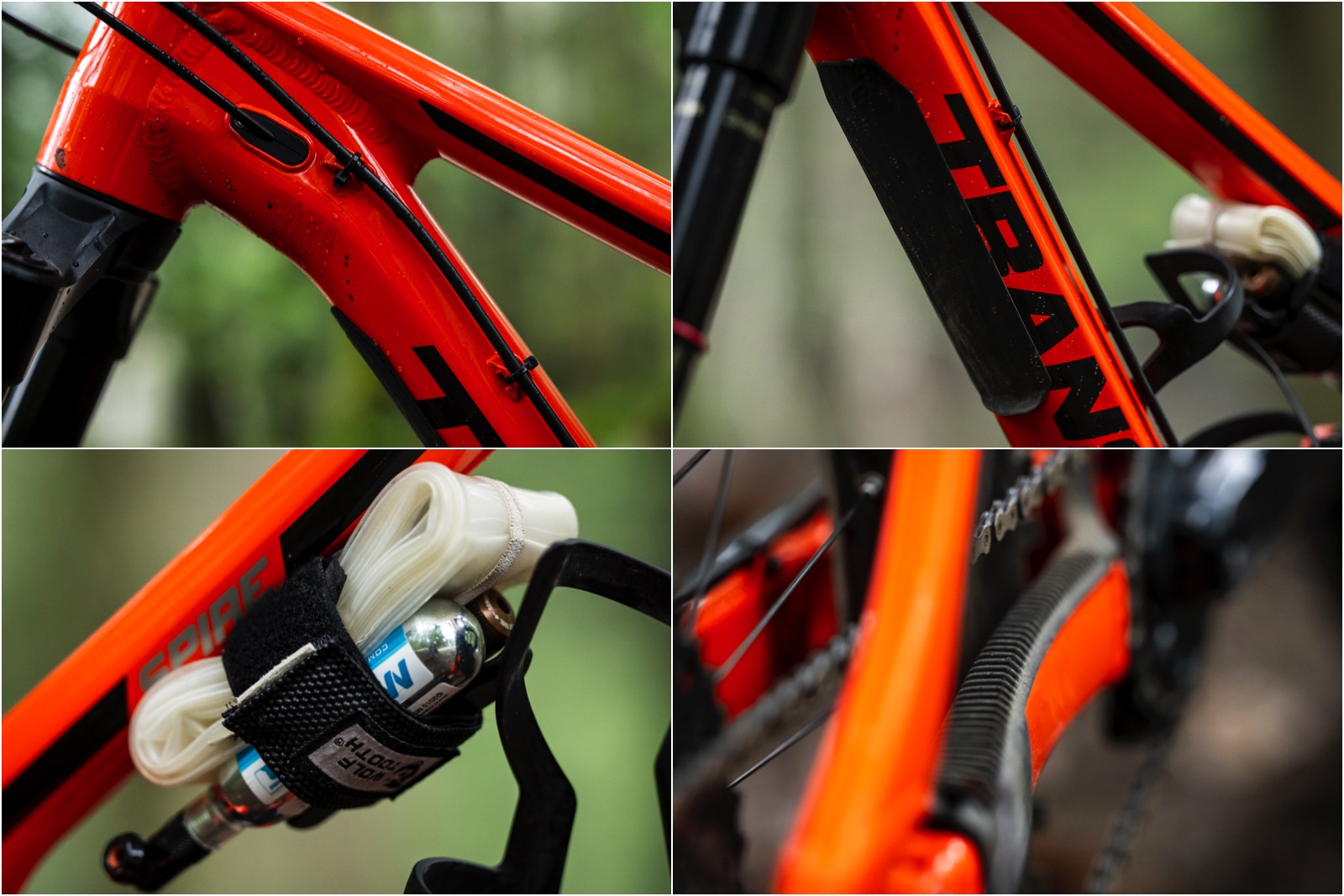 A few little notes on some of the frame features – clockwise from top left: Per usual, Transition utilizes their traditional approach of routing everything internally except the rear brake hose. Personally I dig this as it makes for easy maintenance and a look that is still very clean. There is a shuttle guard – whose adhesive didn’t quite go edge to edge, as you can see in the photo – and a second downtube guard that wraps down toward the bottom bracket. The chainstay protection kept noise down nicely and was cleanly integrated. Lastly, underneath the top tube is an accessory mount, which is nice for keeping essentials off your back and on your bike. The cockpit is mainly comprised of in house ANVL components which are straightforward but feel great. The 35mm diameter bar came in at a 30mm rise. Props to Transition for having the rise of their handlebars vary with frame size – smaller frames have lower rise and larger frames have higher rise – brilliant! Another nice point was the Sensus Lite grips. High quality and a nice feel, albeit slightly thin for me. Rounding out the cockpit and some other bits, the ANVL seat was likely my least favorite part and probably the only aspect I’d really complain about as far as spec goes. It was redeemed by OneUp’s 180mm travel seatpost, which offers smooth action and the best lever feel in the game. Speaking of OneUp, for a bike aimed at getting rowdy I was pleased to see their chainguide included with an upper guide and a lower bash, which meant for plenty of retention and protection, but no drag. Lastly, Transition opted for an appropriate 40mm length stem with hash marks that mesh nicely with its handlebar.

With a 480mm/485mm reach in the size Large I tested, I found the Spire to be dead on in terms of fit. On first glance I thought the 62.5º head tube angle in the low position to be borderline extreme, but inevitably found the bike plenty sprightly – more on that later… An interesting tidbit on the topic of adjustability was the fact that the Spire has two different chainstay lengths in its five size range. S-L frames feature chainstay lengths that are 6mm shorter than their XL and XXL counterparts. While this approach isn’t 100% size specific, it’s absolutely a commendable effort on Transition’s part as it helps preserve appropriately balanced front center:rear center ratios throughout their size range.

Transition Spire on the trail Upon first building up the Spire and taking the geometry and travel numbers into account I had expected the bike to feel like a great deal more on trail than in did in reality. Funny enough, on my first descent I pulled off a couple of times to slow down the rebound damping in the rear shock, which is something I typically have fairly hard wired on my first run. Come to find out the bike is/was just that poppy. The last time I tested a bike that wowed me this much in that regard was when I tested Transition’s Sentinel, so apparently pop is a baked in feature for this brand, even in their inherently less lively aluminum models, so you don’t have to spring for carbon to get some hops.

Now, all of that pop and liveliness does come with some tradeoffs. The suspension doesn’t feel as plow-like as some other Enduro level bikes out there. If mowing down boulders is your number one priority, you might be better suited with a high pivot bike, or something a little more linear. If you do the occasional Enduro race but want a more well rounded bike for the rest of your time on two wheels, the Spire could be your hot ticket. However, in that event it would be worth considering throwing down for a coil sprung rear shock to get a little bit more compliance and traction out of it. One last note on the suspension…The Spire has a fairly linear and even rate of progression – an approach I’m personally quite fond of – and it also puts the bike in a nice spot where both air and coil shocks are amenable on it. Aside from the slight weight penalty from the aluminum frame, the Spire GX Alloy felt like a much more expensive bike on trail. The product manager did an excellent job of picking out parts that deliver on ride quality and they didn’t cut any corners. Aside from finding the seat uncomfortable – a saddle being a more personal part anyway – there isn’t a single component on the bike that I could lob any major complaints at. While I gave a brief rundown on the parts choices above, in short, everything on this bike is high performance and very much up to the task. In terms of climbing, the Spire rates highly both in terms of the body positioning due to its super steep seat angle that puts you in a nice upright position, as well as its fairly calm rear suspension. The only slight setbacks on the climbs are the super slack head tube angle, which does get more manageable in the high position, and the slightly portly nature. On the topic of weight, keep in mind that this bike is lifetime warranted and is likely very very strong.

All in all, I had a blast on this bike and would happily ride one as a personal rig. While I was truly won over by the Spire’s DNA through and through, perhaps what’s most impressive its value – particularly in this specific model. Having flagship suspension and brakes with a very nice cockpit and tires on a sub $5k bike is really something you don’t see very often. The bang for the buck is up there with what consumer direct brands offer, but it’s also worth taking a second to reflect on the phenomenal support Transition offers as it is an aspect that doesn’t quite receive the credit that is due. Need a totally obscure small part? You have insanely thorough consumer direct access for literally anything you’d need. Need torque specs? No prob. Broke your frame? Lifetime warranty. All told the Spire is a really well rounded bike considering how much travel it has. That it’s also widely adjustable is icing on the cake. Keep up the solid work Transition – we’re impressed.