A few months ago, Northern California brand WTB announced a spread of value conscious wheelsets dubbed Proterra. From Gravel to Enduro, the lineup mainly consists of WTB branded parts and are offered in a variety of rim widths. I’ve been testing the Enduro rated Proterra Tough i30 – named for their 30mm inner diameter rims – on a couple of different longer travel bikes. Here’s the full scoop on how they’ve been working out. 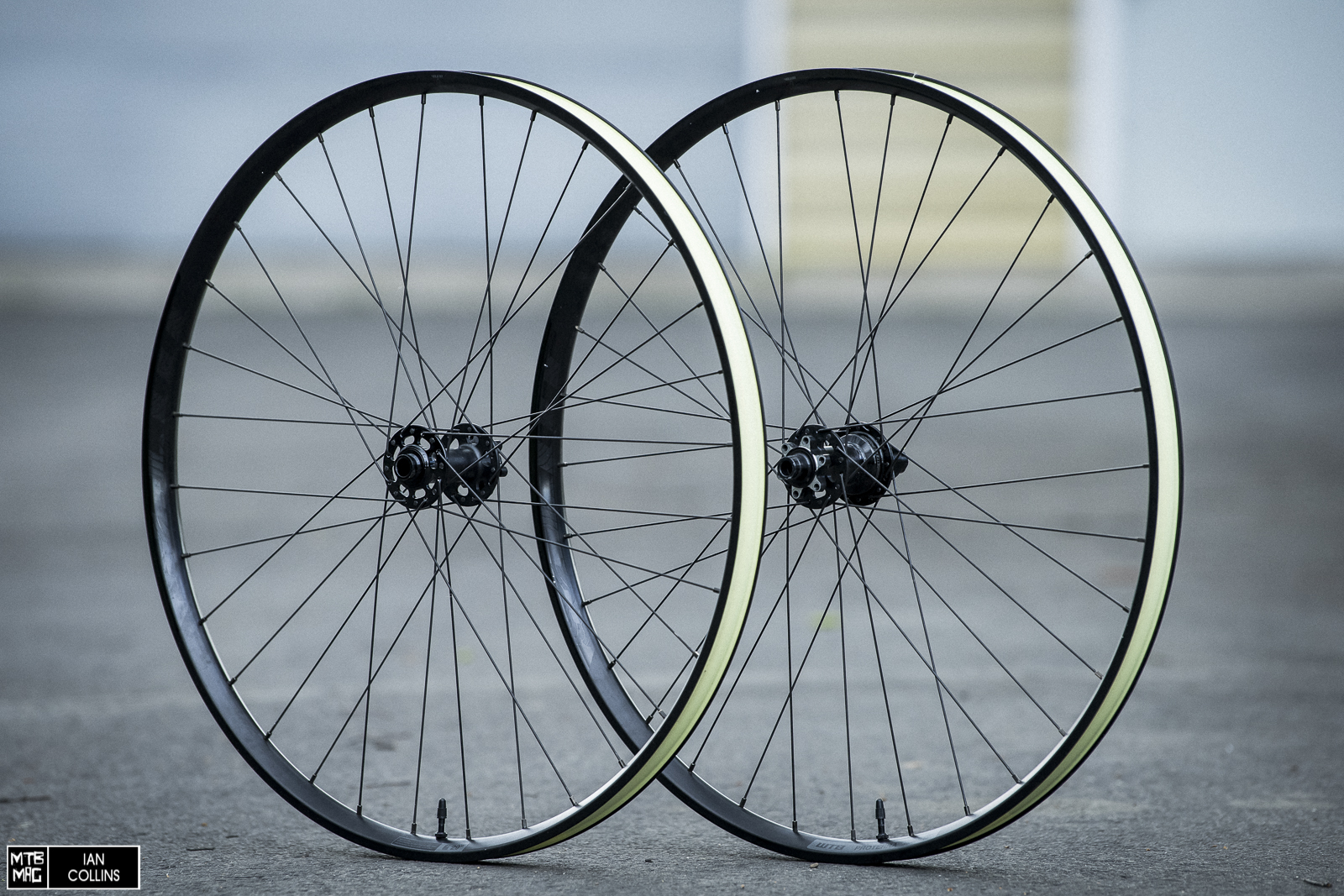 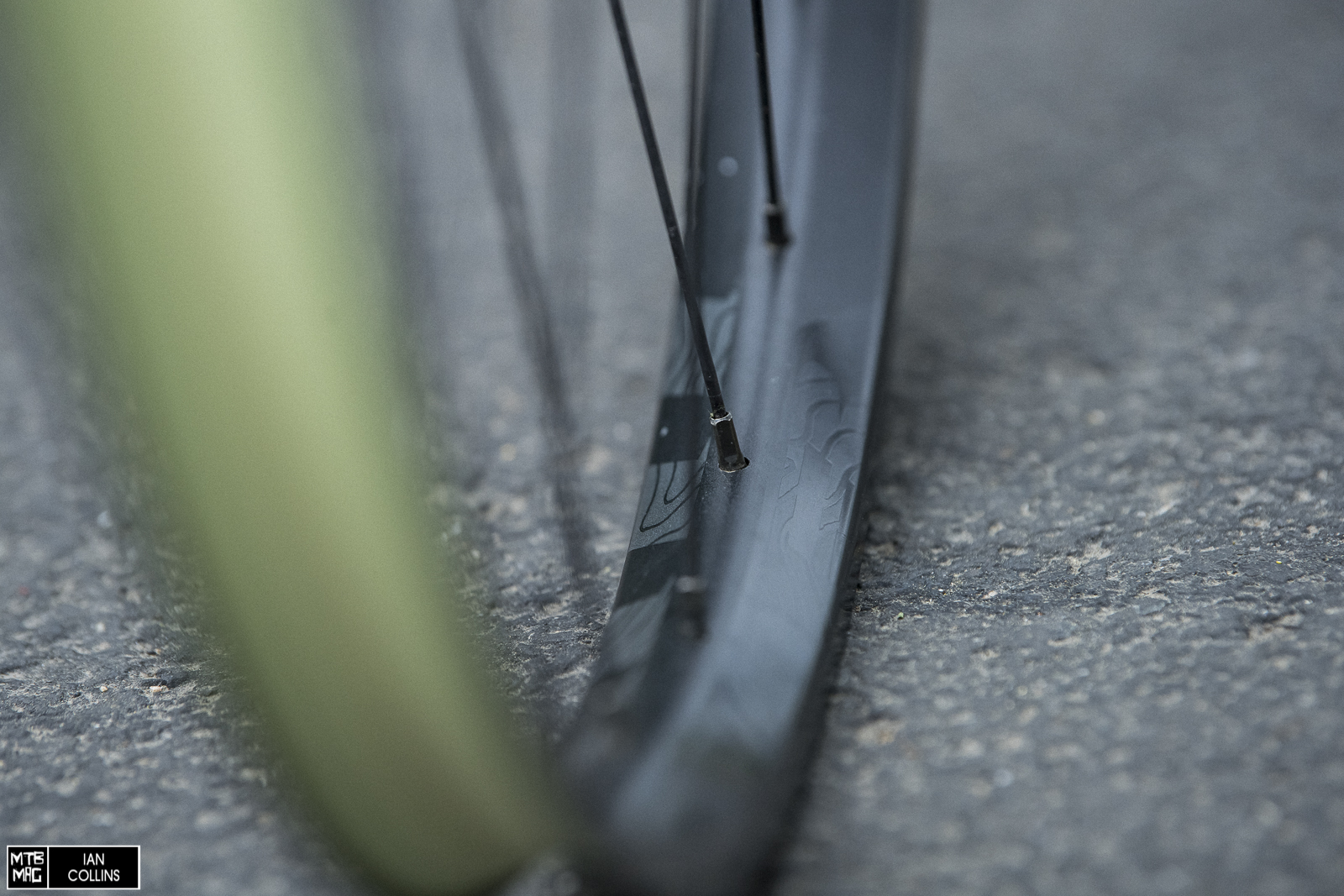 The rim profile is fairly standard and on trend here. It’s fairly shallow and comes in at 34mm externally and a broadly settled upon, given its duty, 30mm internal width. 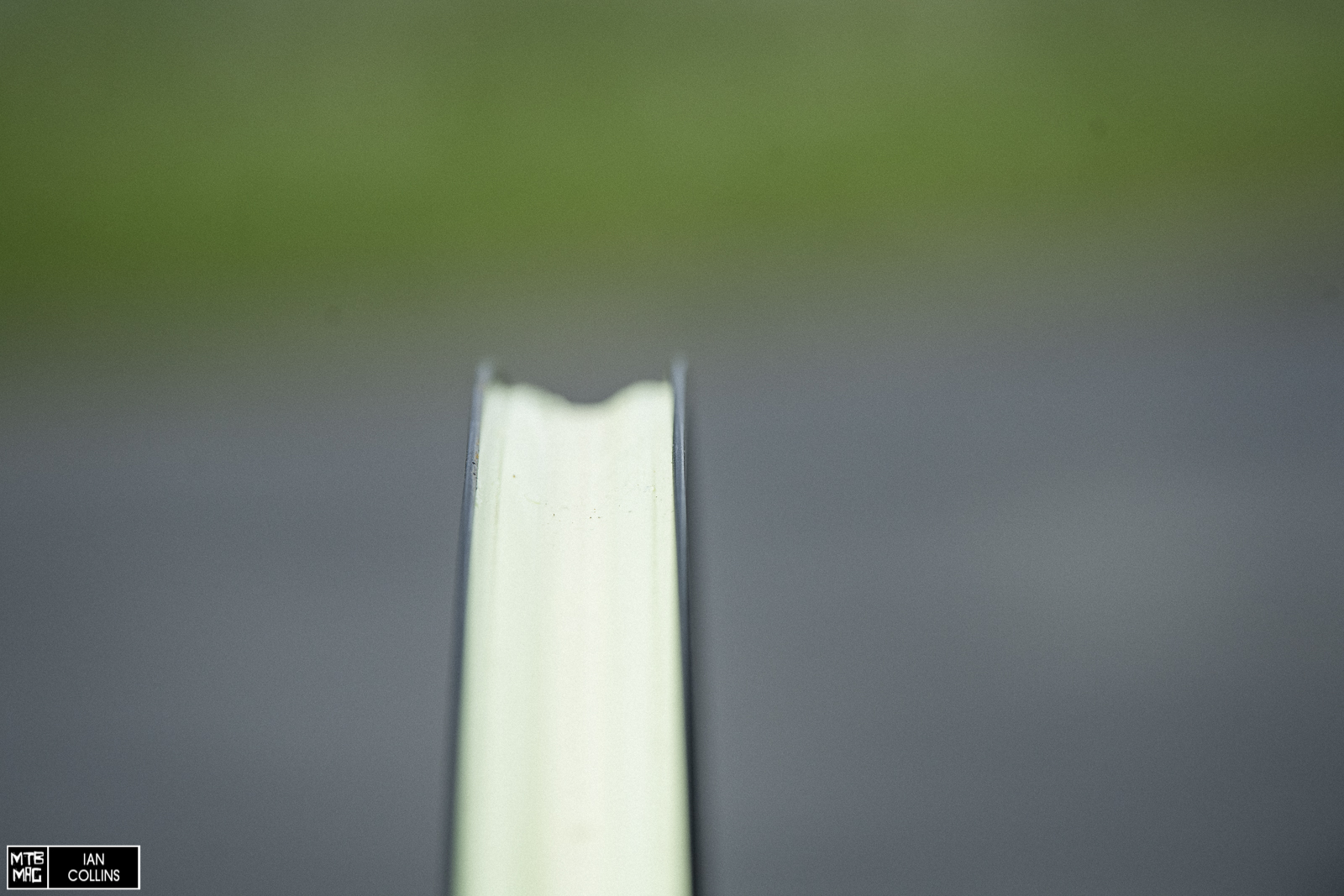 The rims have a hooked bead wall and a fairly pronounced drop center for easy tire installs. Interestingly, there is a slight drop at the bead walls as well. What you can’t see in the picture is “Solid strip”, which is a robust additional layer that can prevent flats coming from the spokes in the event that you break one. 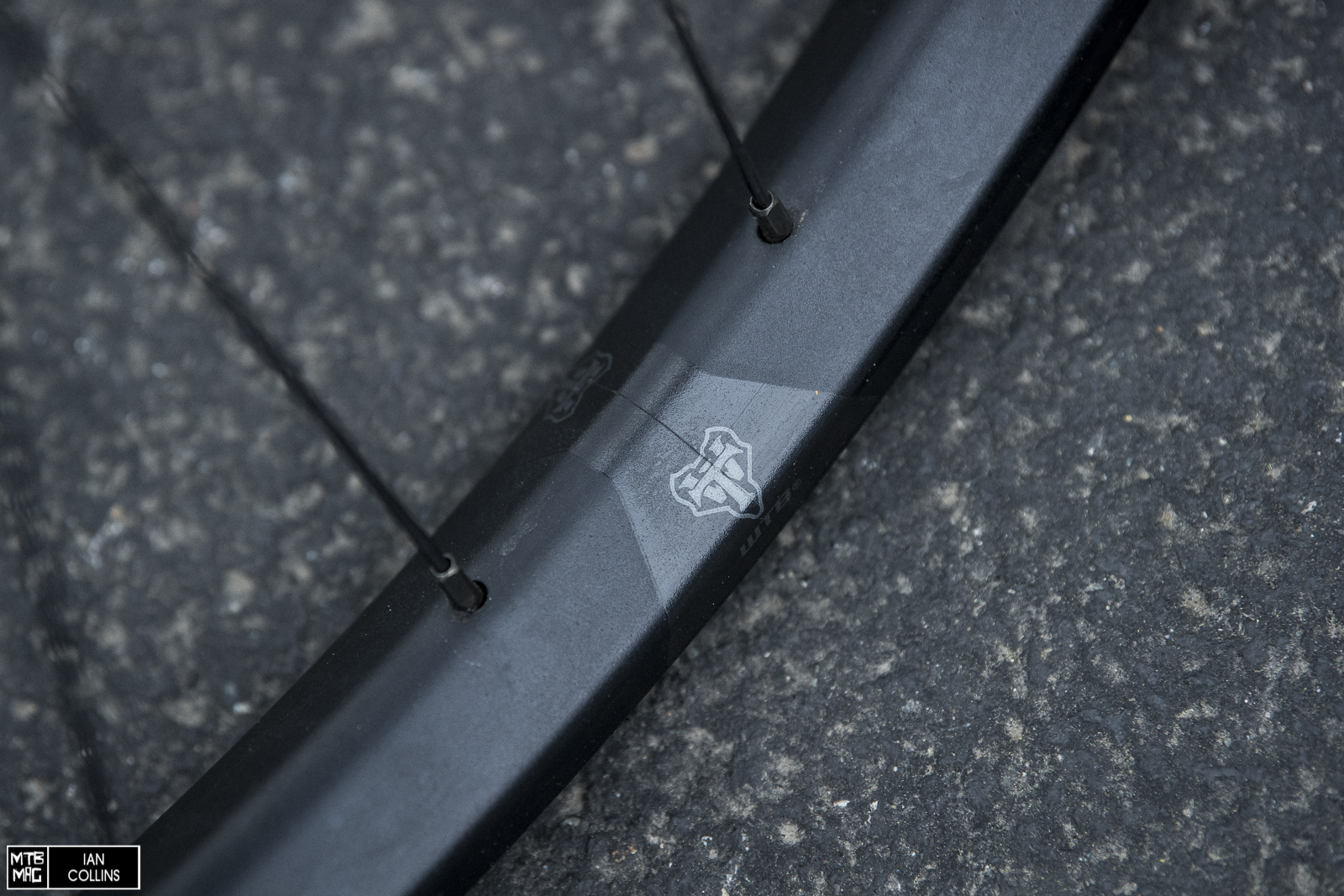 The Proterra rims use a sleeved joint. Rather than welding and grinding down the intersection, a section of aluminum is connects the two ends of the extrusion internally and is bonded into place. Subtle graphics are etched into the rims. Also note that the spoke holes don’t use grommets, and nor do they nipples use washers inside the rim. This approach also seems to be growing in popularity. Another interesting aspect of the rim is that it has 3 cavities, made from two inner walls, which run more vertically than horizontally. 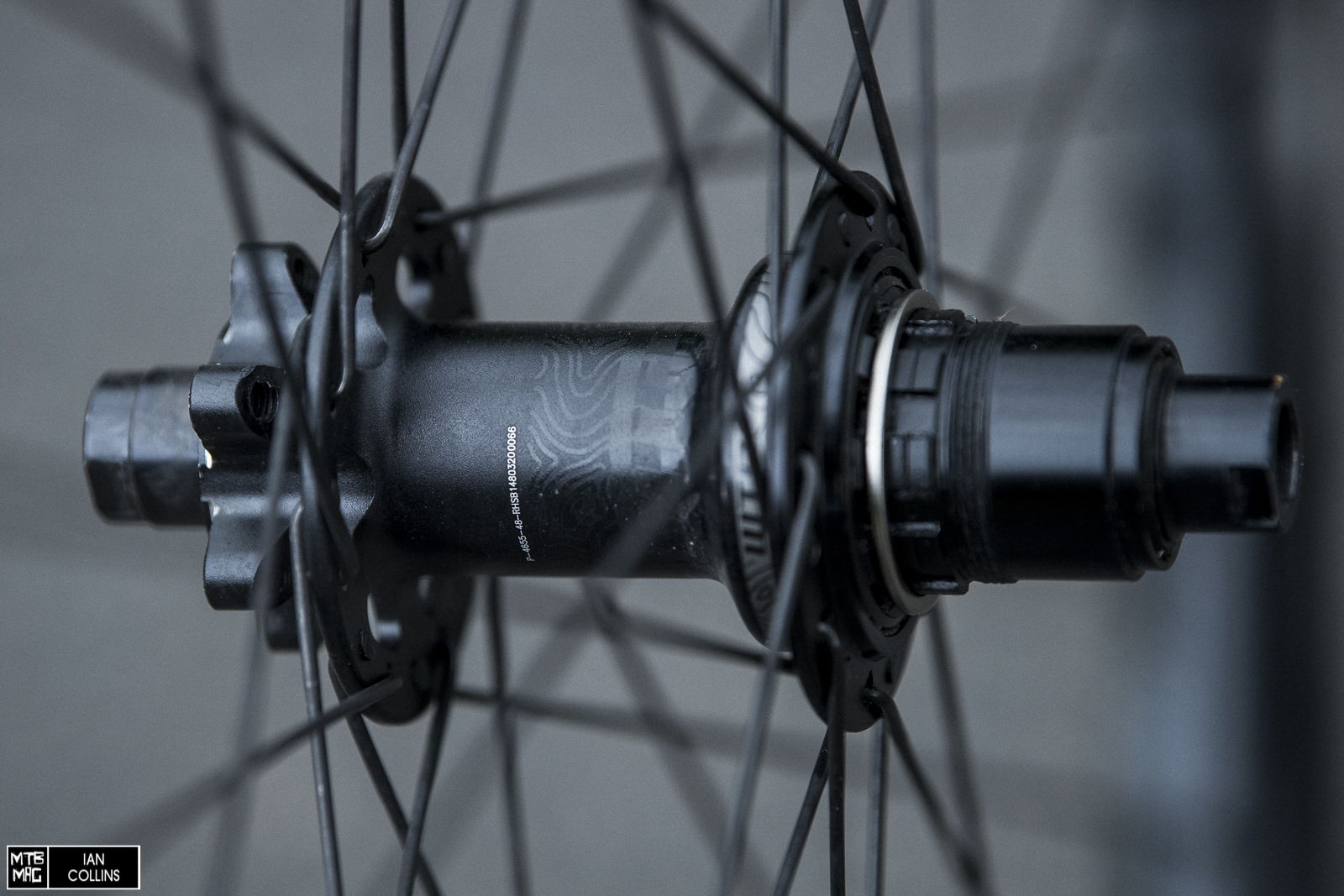 The hubs are pretty straightforward and also feature low key graphics. There is some relief at the brake side flange to save weight. Both SRAM XD (pictured) and Shimano Microspline freehub bodies are offered. 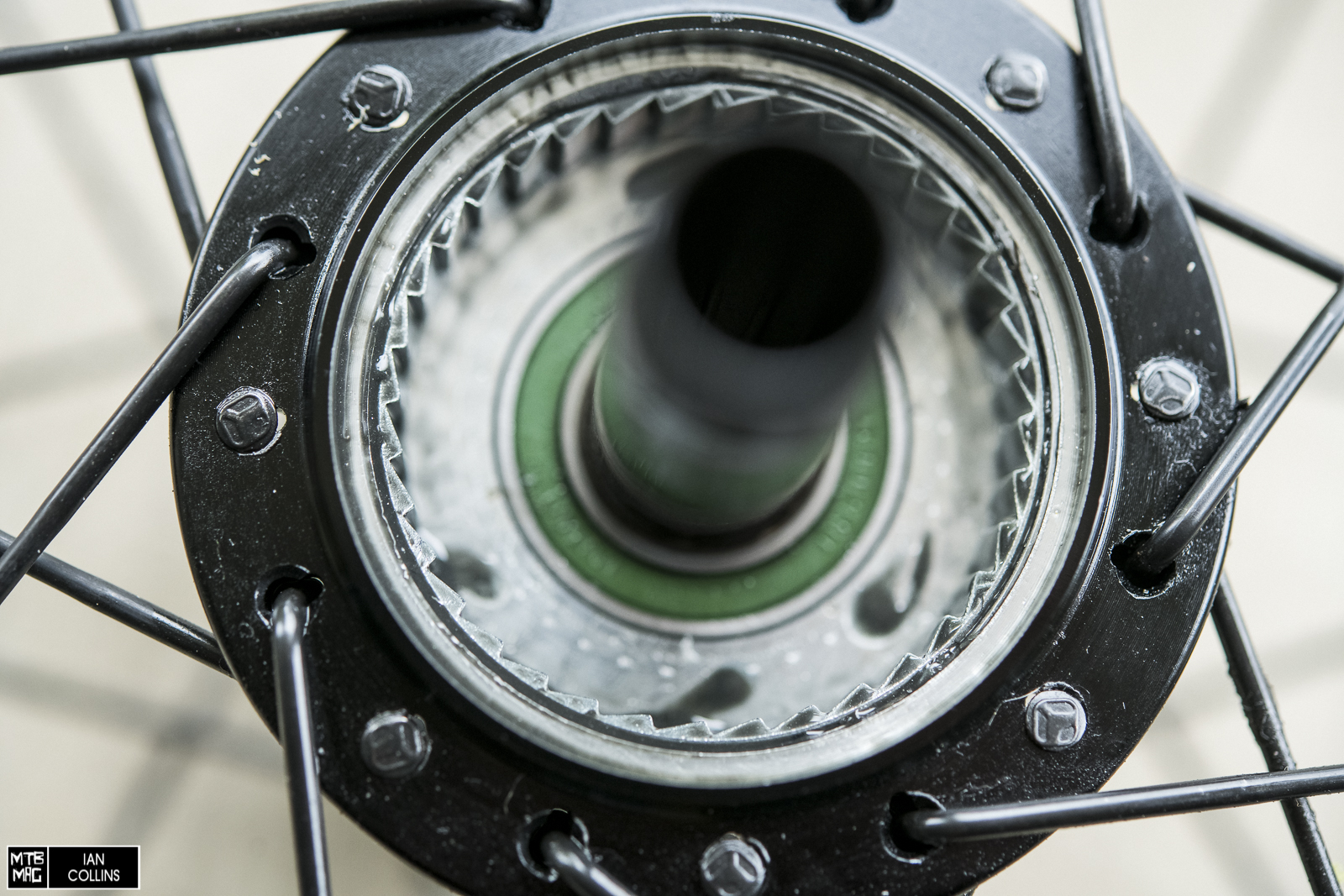 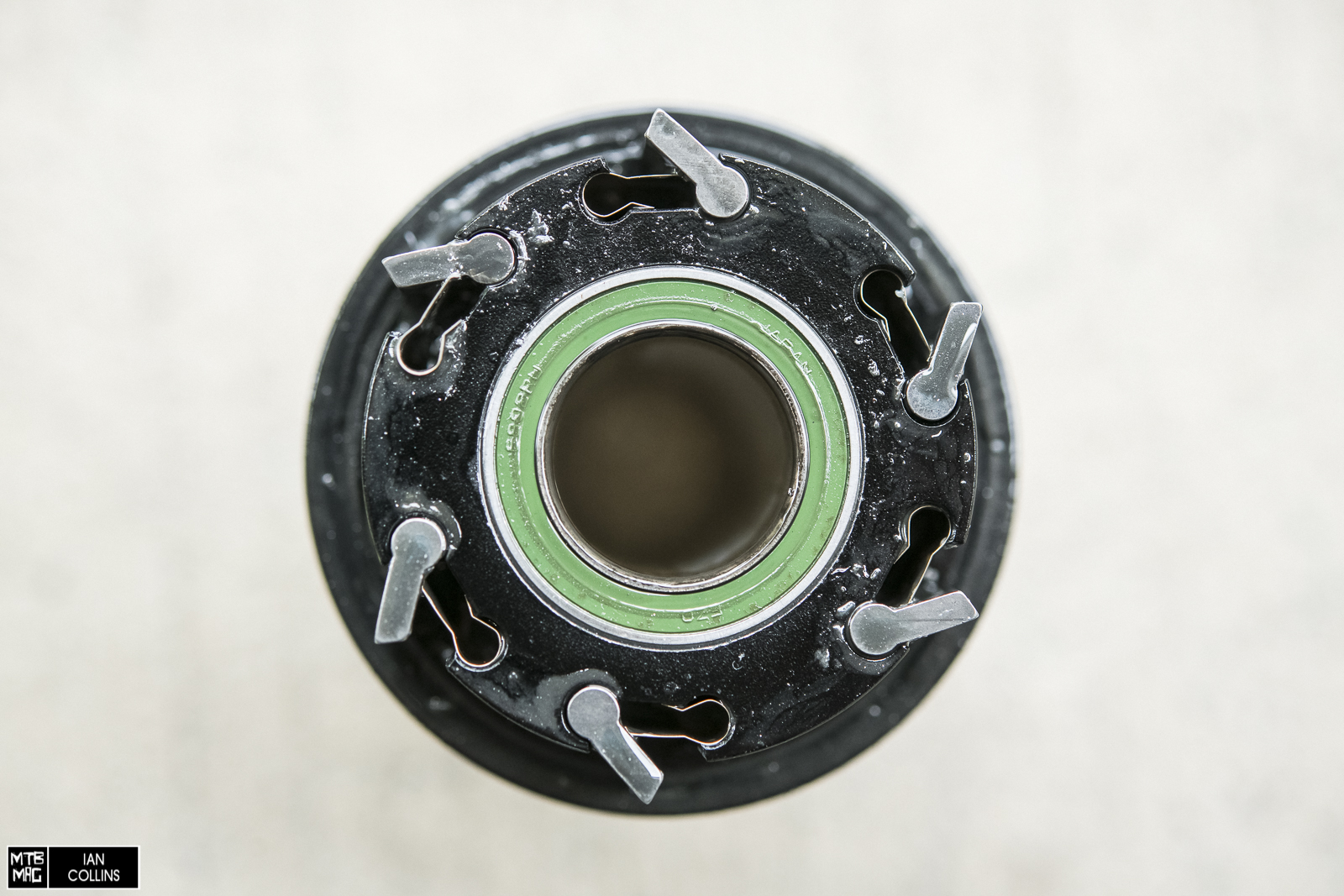 And six pawls for biting – pretty standard, tried and true, no frills stuff. Another look at the relief on the hubs. Also note the standard double butted spokes from Sapim.

I mounted up a set of WTB Vigilante/Trail boss tires, which were supplied and proved to be a grabby, yet fairly fast rolling option. In any case, they popped on with a floor pump easily and it was off to the trails. The Proterras split their time between my Transition Sentinel and my Trek Rail e-Bike. I’m a firm believer that e-bikes are a great test bed for most parts, as their extra weight can really stress parts, which can be especially revealing when testing wheels and brakes in particular. Anyhow, at 2,109 grams the Proterras won’t blow your mind in the weight category, but they aren’t excessively heavy either. Things like brass nipples, a 32 hole spoke count and the “solid strip” add some grams, but pay dividends in the long run, particularly if you’re rough on your bike.

Starting off, the wheels felt about as I expected them to. They sported a nice, sturdy ride that you’d come to expect from an aluminum wheelset with this duty rating. They don’t have the resilient feel of carbon fiber, but they don’t feel dead either. The rim width offers good tire support for 2.3-2.7″ tires, which is right on the money. A 32 hole spoke count likely added to their stiffness and to be frank they handled quite nicely for a value wheelset. An area where you might expect some corners to be cut is in the engagement, but with 3.7º on offer, the Proterras are actually pretty darn good. All in all, WTB hasn’t really skimped out anywhere in particular and you can feel that on trail. After a few rides, I noticed my chain was sagging a bit when coasting and realized I had a small issue with a little drag in the freehub. I pulled the hub apart for a look, which was a bit of a nuanced process. The design is quite simple, but it utilizes two end caps on the axle, which is sandwiched in by bearings. This means that if the non-drive side end cap breaks free first, you can’t tug the freehub body off by hand. You’ll need to find an 11mm allen key and insert it into the axle in order to unscrew the other end cap. *You can see a picture of the interface above.* This is mildly bothersome as 11mm allen keys aren’t exactly commonplace. Once sourced however, I pulled things apart, greased the internals with better-than-factory lube and haven’t had an issue since. I also put a couple of drops of blue loctite on the non-drive side axle cap so it will be more apt to stay fixed, in order to simplify future rebuilds.

For the last few months I’ve been rallying pretty hard on very rocky terrain here in Northern Idaho and the Proterras have been holding their own admirably. Both sets of tires I’ve used have had mid weight casings, running in the mid 20 PSI range and I have yet to dent the rims. The reason I mention tire casings is that you’re far more likely to dent a rim with thinner tires than say, a DH casing tire, but it hasn’t happened yet. It’s also worth pointing out that I haven’t been running tire inserts either. With all that in mind, the bike park opens today and I’ll be heading out tomorrow, so at that point anything can happen…

For $600 complete, WTB has put together a nice set of wheels and still the “strong light cheap, pick two” adage holds strong. The Proterras lean toward the tougher and more affordable end of those three aspects but are a touch portly. With that in mind, any wheelset that comes in at just $600 and is substantially lighter is likely to be a bit flimsier than the Proterras are. These wheels have a nice ride quality and have proven to be rather tough on trail so far. The only minor setback is that you’ll likely need an oddball 11mm allen key for rebuilds, but on the bright side, said tool will only set you back a buck or two. All in all, a worth set of wheels for the money.

[Video] Red Bull Formation Is On