The rhythm of constant rain has been the soundtrack in the Pacific Northwest for too long now, greatly magnified by the tin roof of my house. The incessant ‘pitter patter’ a constant reminder that the trails are saturated, better suited at this time of year for a kayak then a bike, a depressing look out the window reveals only darkness at 3:20 in the afternoon… 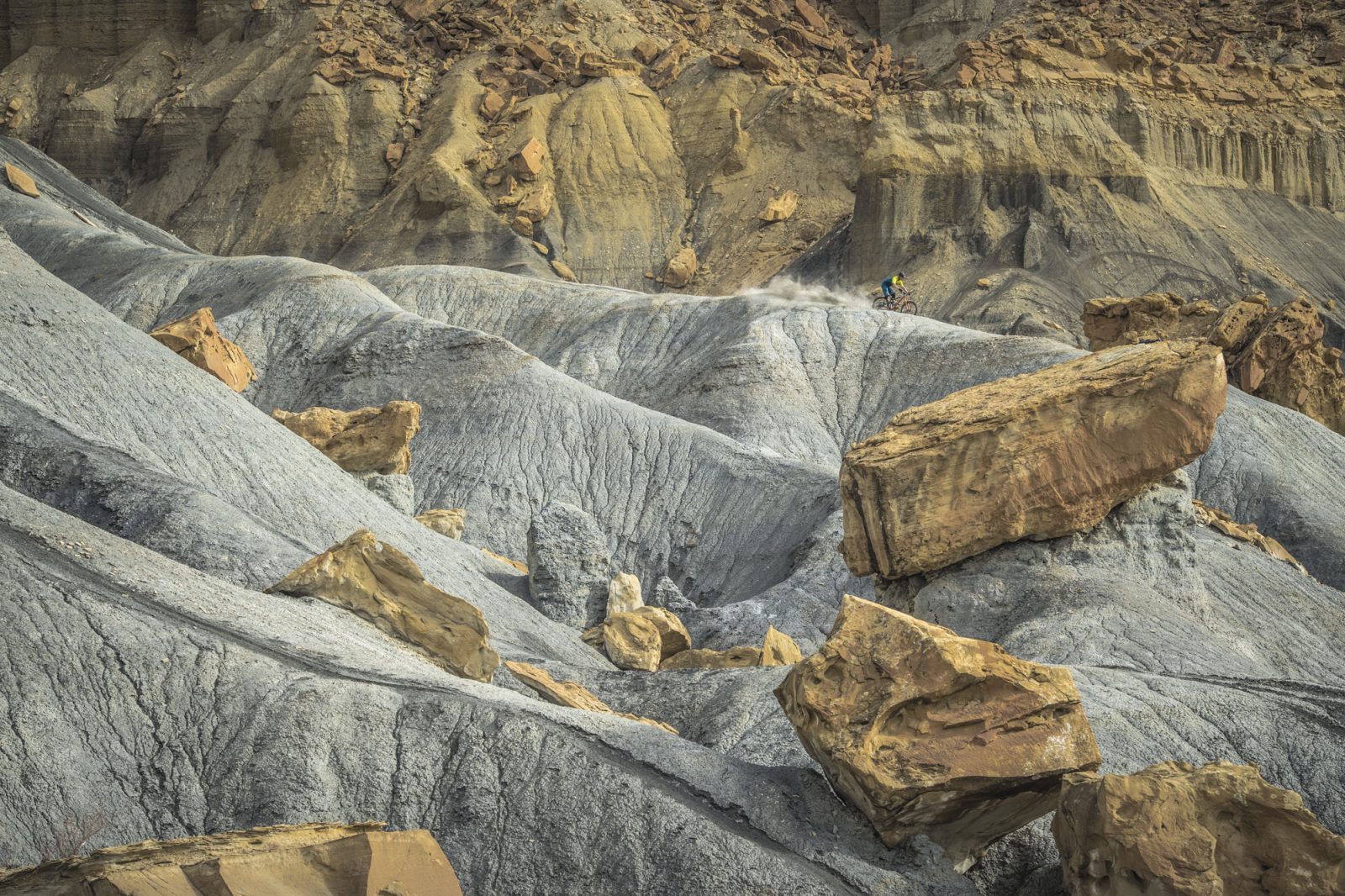 There are many ways to stay entertained throughout the winter; riding mountains on skis or boards, getting fit on the squat rack, catching up on some books that were started in summer, and interrupted by epic rides, dog hangouts, pot luck dinners, trail building etc. All of these are fun, but they do not feed the soul like breaking loose into a turn on the mountain bike.

The only solution guaranteed to feed the soul is to pack the truck and to drive down to the desert. 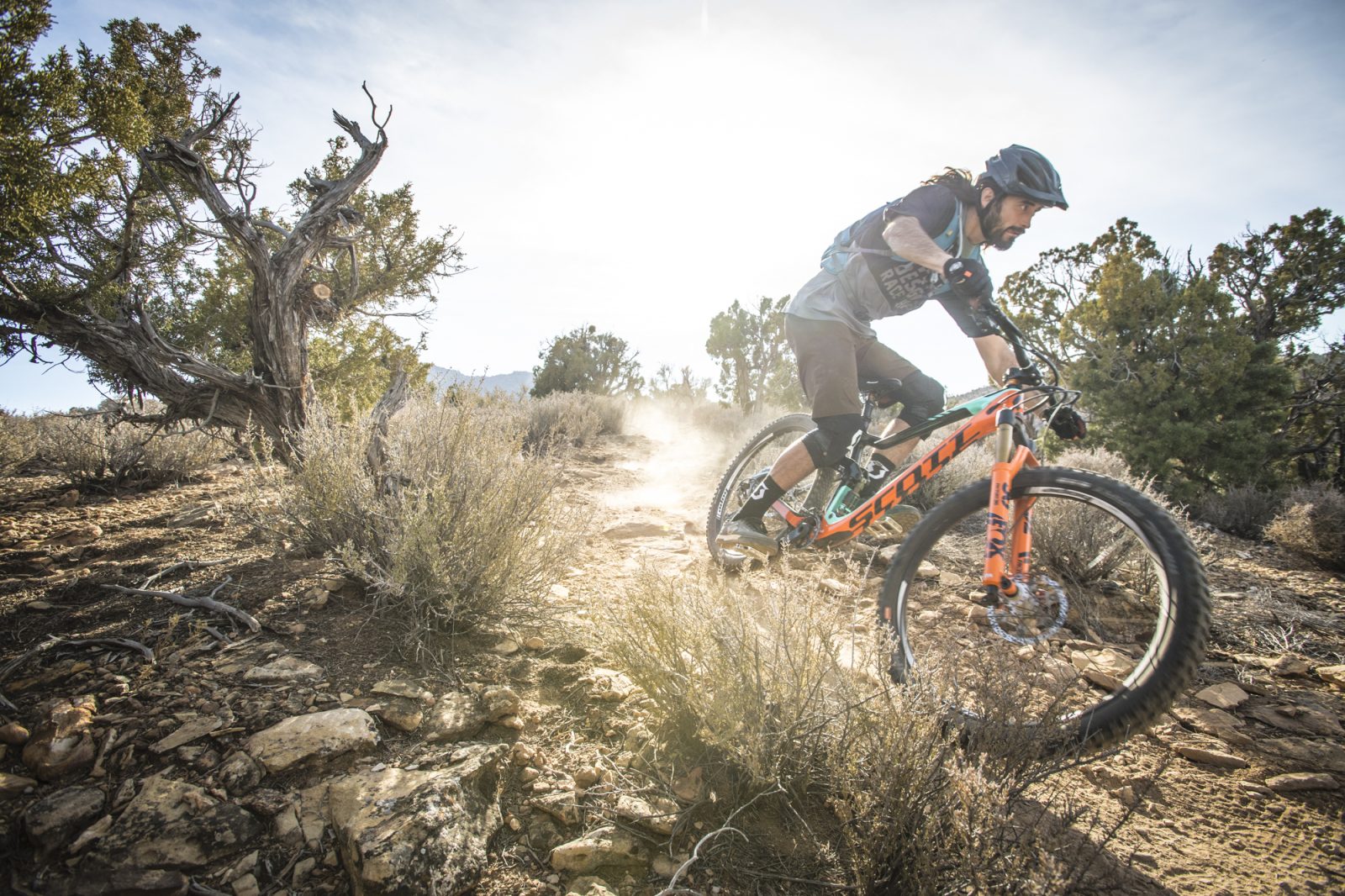 “For me Virgin, UT is associated with Rampage, to be able to get out there and ride some of the other amazing trails and terrain of Virgin was just what I needed, the winter was setting in at home and I was needing some seat time to burn off the holiday indulging.”

For us in the Pacific Northwest (being Canadian it’s the Pacific Southwest, but I digress) it is the tried and true Utah pilgrimage. The destination is normally Moab, a drive I have repeated so many times over the years I don’t even bother to look at a map. In fact I know it is basically 15 hours of driving from my house in Squamish to the In-N-Out burger just outside Salt Lake. Utah has been a mecca for mountain bikes since the early 80’s, but its two-wheeled history dates back to 1969, a perfect storm of trail adapted Honda 90 motorbikes and the unique slickrock landscape.

For this particular trip, our destination was Virgin Utah. With its long tradition of freeride history we were stoked to bring the trail bikes and explore some of the phenomenal all-mountain riding in the area. 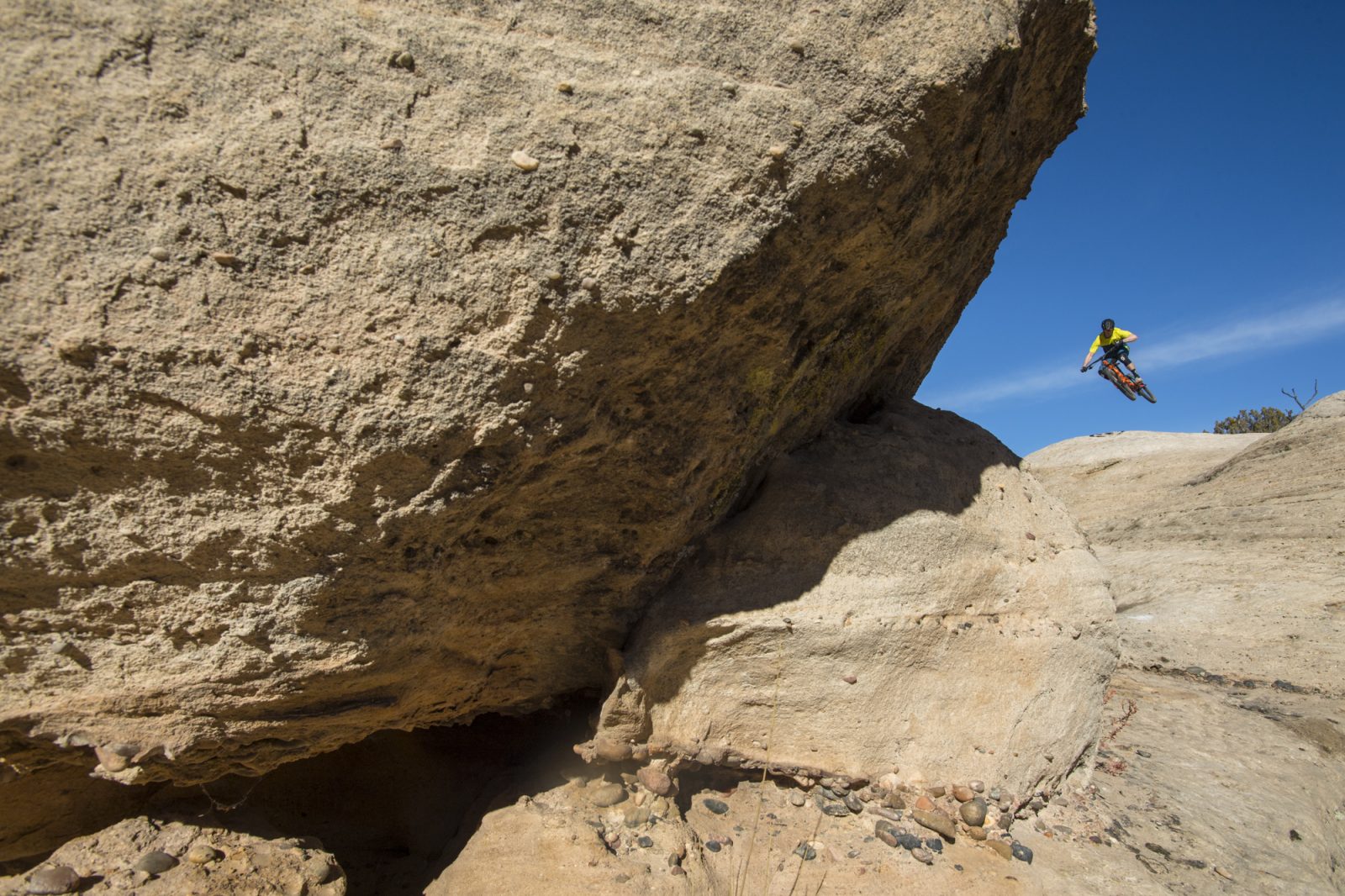 Every good trip, needs a good crew and ours came together for this trip in no time. Kyle Jameson, Stan Jorgenson and Scott Markewitz, each with strong, yet drastically different ties to the desert.

Stan had raced several desert enduros in the last few years and was itching to return with no race start times.

“Prior to this trip I had only seen Virgin Utah from bike videos growing up as a grom. To finally get to ride bikes there was a surreal experience. Virgin Utah is known to be a Freeride zone for downhill bikes, to get the chance to push our trail bikes to the limit was awesome.” 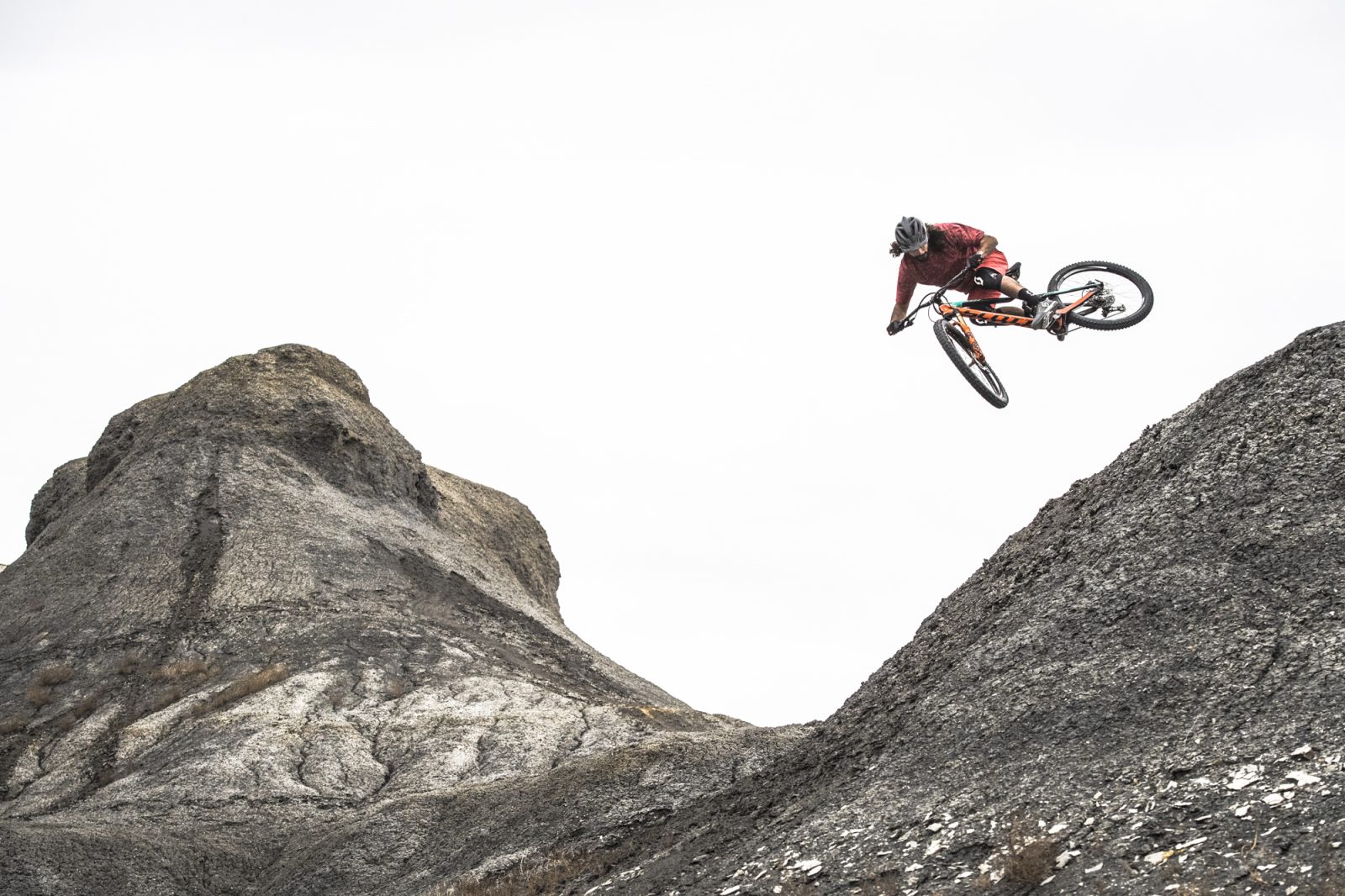 “I’ve always gone to Virgin to ride my big bike on the infamous cliffs, humps, and jumps. This time around we brought trail bikes, and we were interested in how far we could push them, spoiler alert, the trail bikes loved it!”

Scott Markewitz, a California transplant moved to Utah in 1980 for the skiing, stayed for the biking and never looked back. There was no better guy to link up with for a Utah trip then Markewitz. He knows where the trails start, where the light will be and where to find real beer. Originally moving to Utah first as an amateur mogul skier, he quickly became a professional mogul and freeskier. Unfortunately skier’s knees are a depreciating asset, and Markewitz slowly made the switch to the other side of the lens. He has been defining action sports photography ever since. 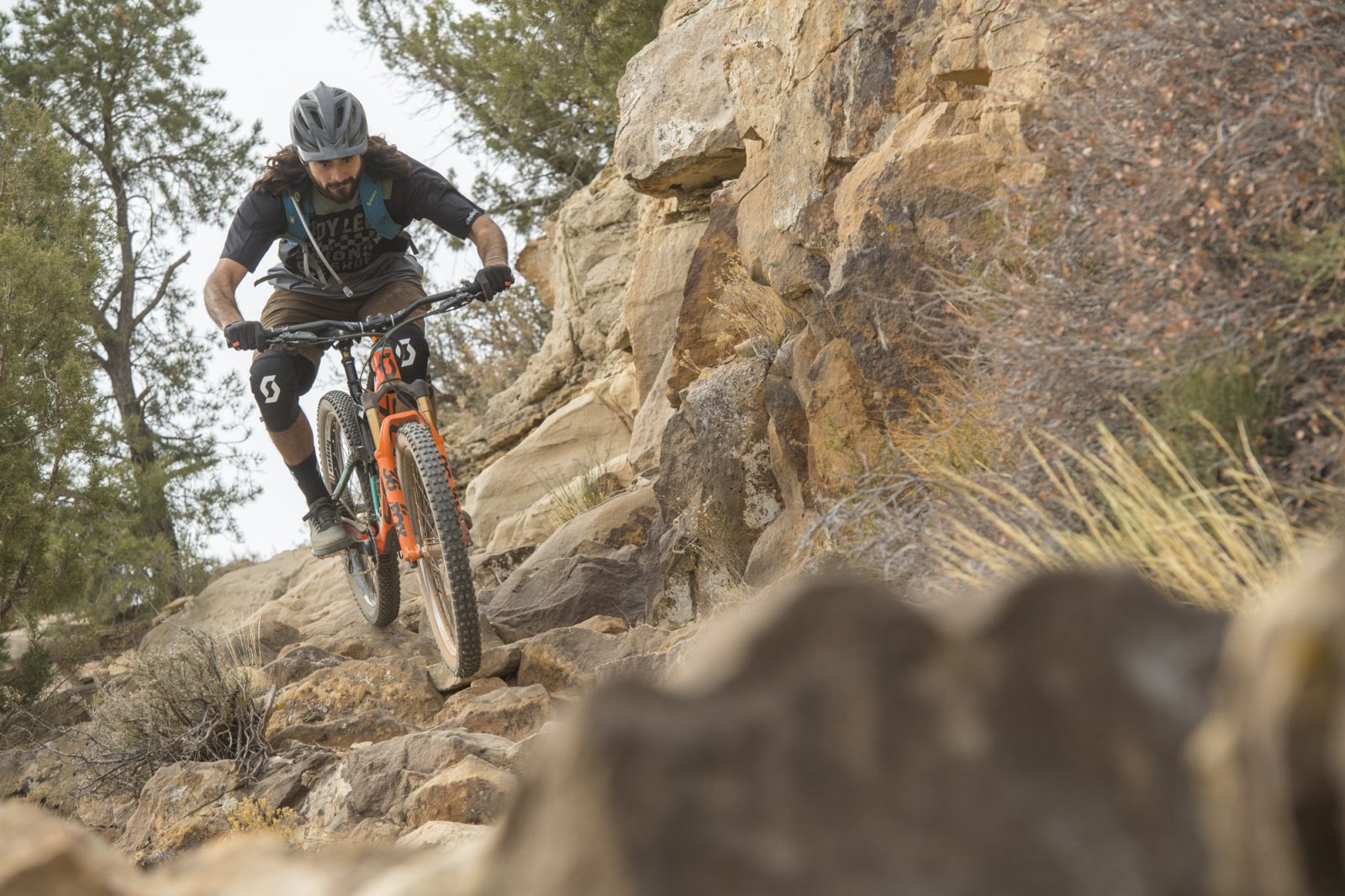 “One of the really unique things about Utah is the incredible diversity of landscapes and climates across the state.  You could literally ski blower powder in the morning, jump in your car and drive south for a few hours and be on your bike riding the desert in the afternoon.  When I got the call to join the SCOTT crew on this shoot, I jumped on it.  The riding around Virgin and St George is lesser known than Moab, but is some of my favorite desert riding anywhere.  As much as I love skiing, it’s great to get out once in awhile for a bike trip, and this trip lined up perfectly with the timing, the weather, and the crew.”

Upon Markewitz’s recommendation we booked two of Gooseberry Yurts accommodation. Perched on the edge of Gooseberry mesa, overlooking several iterations of the Red Bull Rampage course, it couldn’t get any better. 10/10 would recommend staying in one of their yurts with the infamous Gooseberry Mesa trail on one side and the canyon edge on the other the location redefines both scenic and ride-in, ride-out.

The trails around Virgin are an interesting mix of rugged and super rough, like Grafton DH, which can rattle the fillings out of teeth and smooth, transition filled sandstone. Finding the ‘flow’ sometimes requires jedi like riding to tame the jank, or the polar opposite where you could carve endless sandstone with your eyes closed. 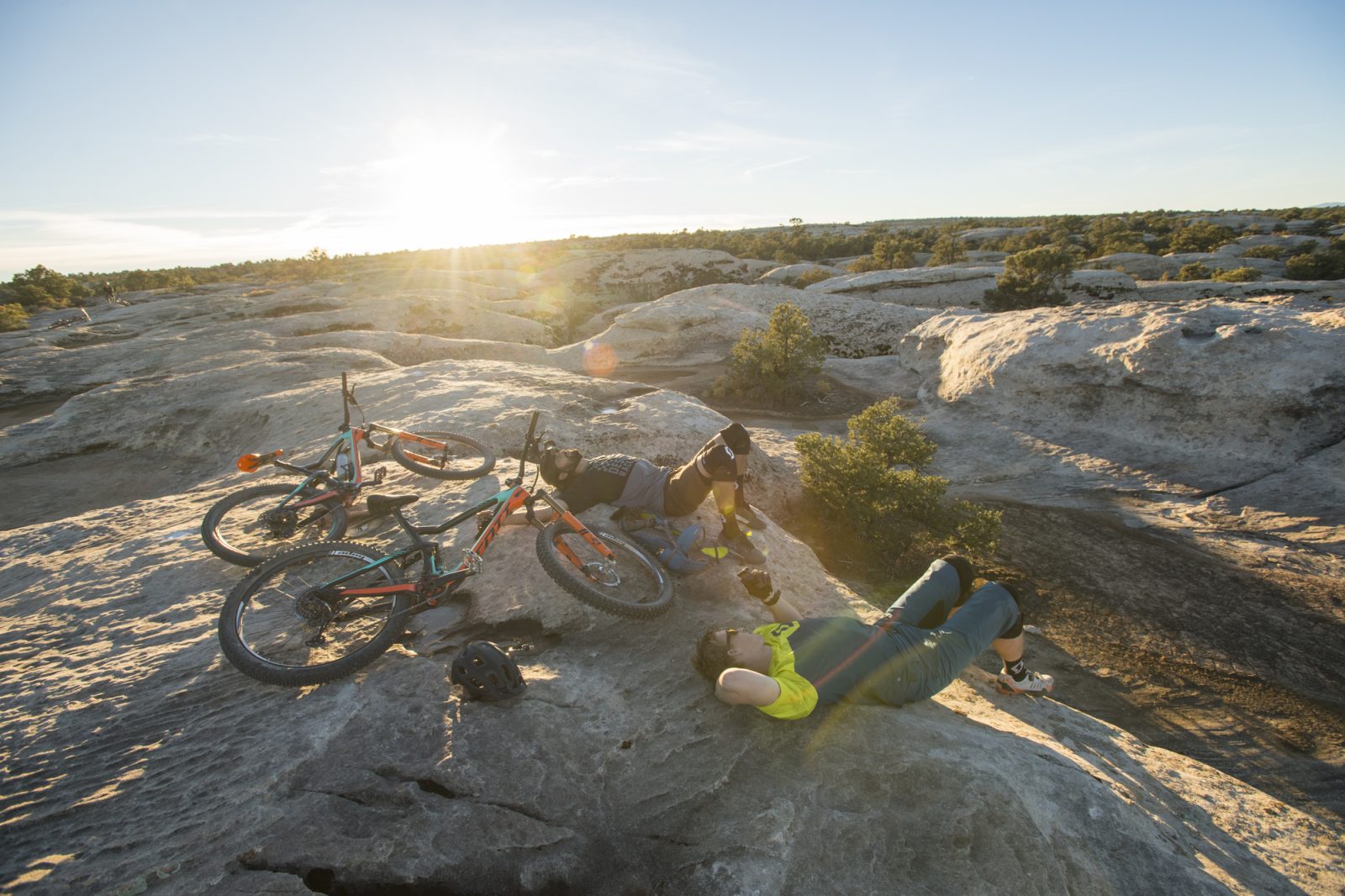 “Riding with Stan was a blast, his riding background is much different than mine but we still share the same joys, he was able to influence me to charge hard everywhere!”

This mix of terrain created the perfect arena to pit Stan’s enduro chops against KJ’s freeride style. While trying to avoid the ‘feeding off of each other’ cliché, observing their individual styles influencing each other was quite inspiring. KJ was pedaling into stuff with incredible precision, while Stan was airing into everything throwing tables and turndowns with reckless abandon. I don’t know if we will see Kyle on the EWS circuit anytime soon, but we saw the birth of ‘Big Mountain Stan’ as he chased Kyle down Virgin’s infamous King Kong trail.

“Riding with Kyle was awesome, if its one person you’d want to follow down a ridge line it’d be KJ.” 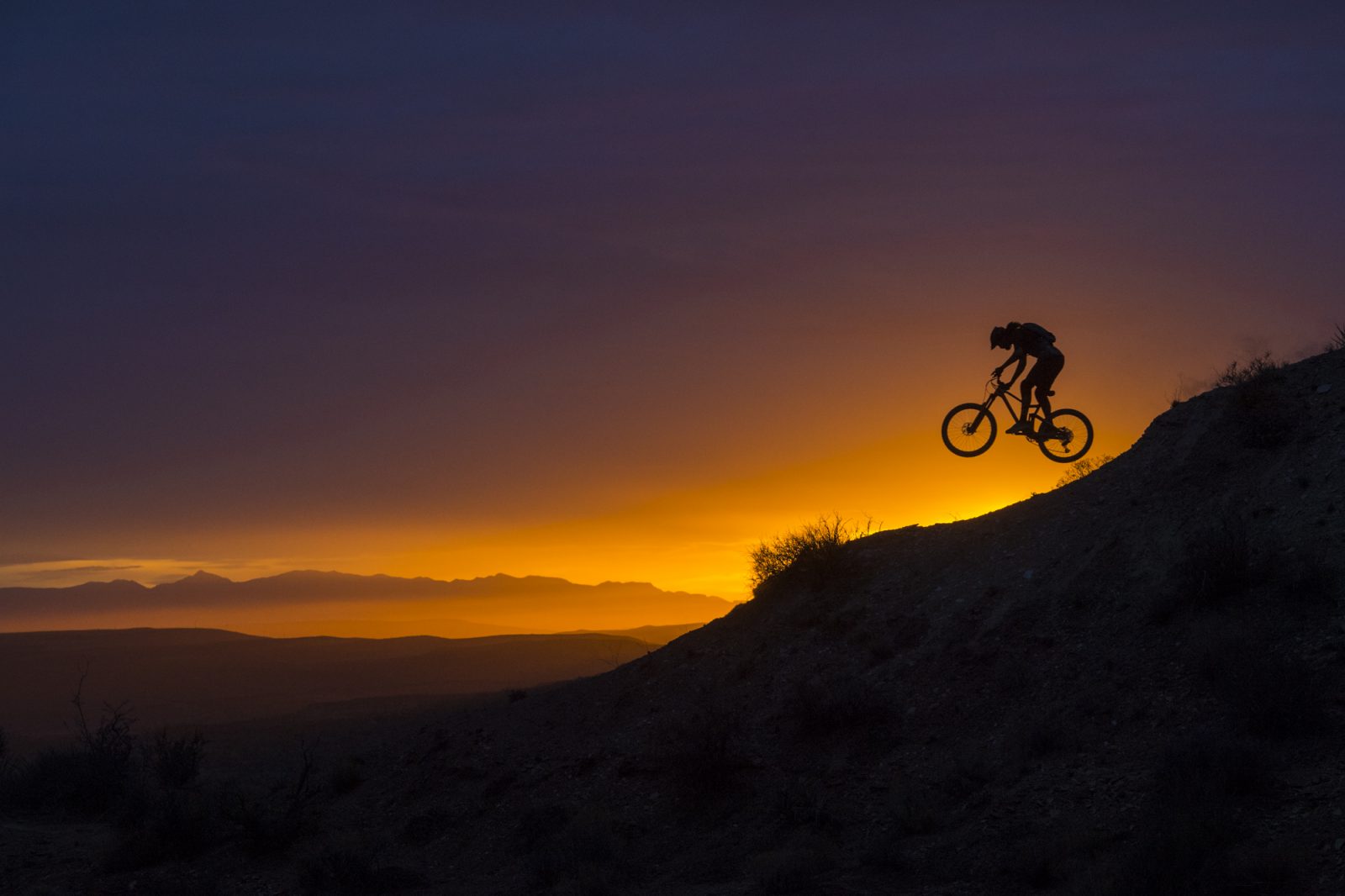 It didn’t take long to realize that we had wound up in a special place. Though we were just able to discover the tip of Utah’s proverbial iceberg, it was just what the doctor ordered for the winter. There are still many more areas to tick off the list, which means many more reasons to come back to the fabled land of year round shred.