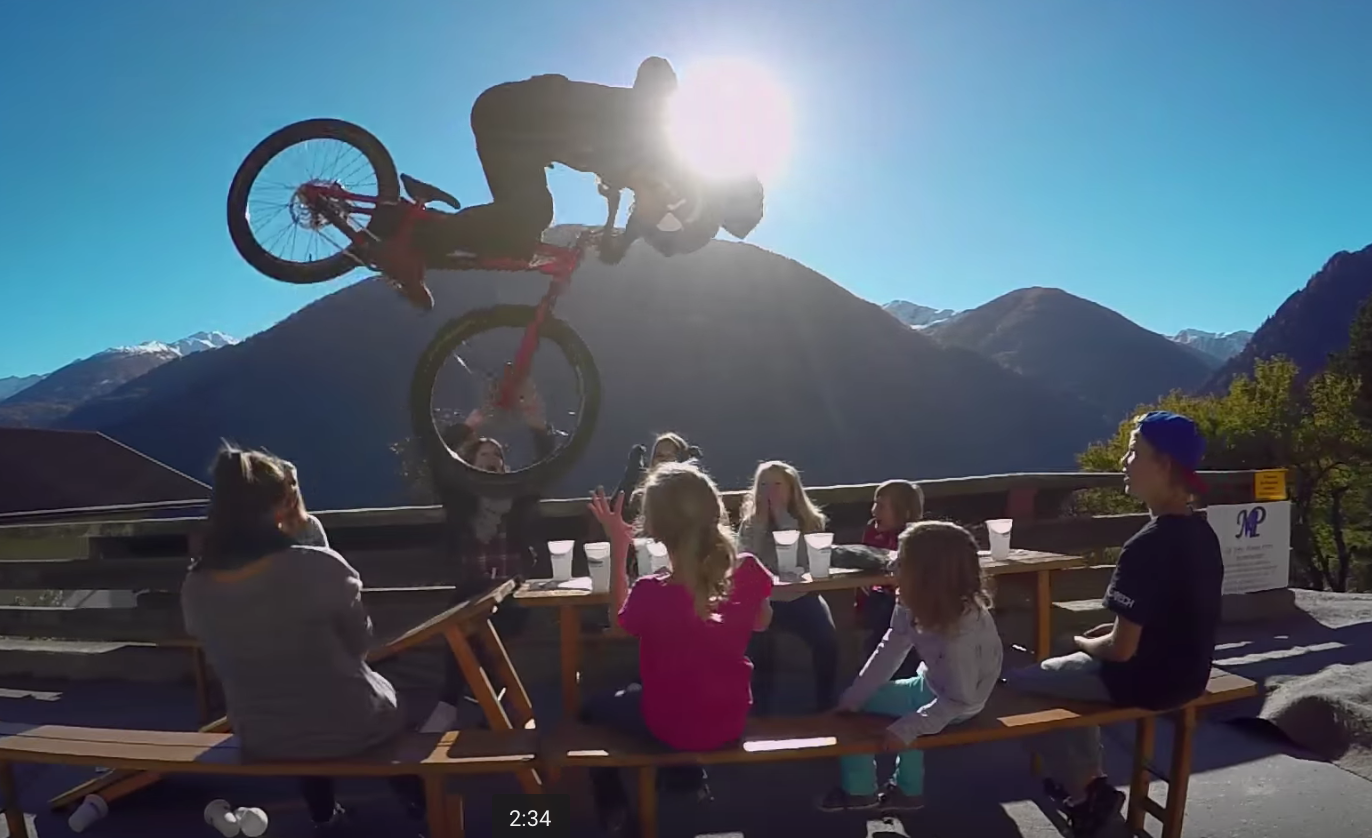 Munich, December 17th 2015 – Millions of fans were thrilled by Fabio Wibmer’s staged escape from the police in his clip “Limitless Trail”. The clip even won October’s “GoPro of the World Best Line Contest”. Now featuring new camera angles and scenes, the clip “Fabiolous Escape” shows the full story. Take a ride on the wild side and watch the full edit here: https://youtu.be/CDitcUyZ6Ws

There is no doubt that Fabio Wibmer is the next generation of mountain bike stars. The Austrian rider from the East Tyrol region made a name for himself thanks to his impressive street trials riding. The nineteen year old used to train with pioneer Danny MacAskill in the Red Bull Wings Academy and now he rides together with Danny in his Drop and Roll Team, performing live shows across Europe.

Fabio not only has a unique talent for riding bikes – he is also a very creative person with a stream of ideas flooding in daily. The clip “Fabiolous Escape” is the full version of his recent successful release “Limitless Trial”. The clip is a lively and fun video of Fabio escaping from the police in his hometown in the Austrian countryside. Backflipping from playground swings, traversing rooftops and jumping over road gaps are just some of the challenges Fabio overcomes in his getaway. Here is what Fabio has to say about the making of “Fabiolous Escape”.

Hi Fabio. In your clip “Limitless Trail” you are on a wild escape from the police. How did you get the idea for the clip?
I need to admit that I came up with the idea quite spontaneously. I wanted to shoot a GoPro clip for the online contest and include a small story. And somehow I came up with the escape from the police. I can’t really say how the idea came to my head, but I am really happy that I could realize it.

And which sequence do you like best?
It might sound funny, but a scene that I really like is the one where I do a one-handed wheelie and look into the camera at the end of the clip. It was definitely not one of the most difficult tricks, but it fits perfectly into the scene.

Did you expect “Limitless Trail” to be so successful?
It was insane! I would have never imagined it would get 45 million views on Facebook. I’m super happy with that and thank everyone for their support.

How did you prepare yourself for the shooting?
I had to prepare a lot for the shooting, from the police car to the building of the swing for the backflip onto the bike. All of this took a long time. I also had to train a lot. For example, I practiced back flips with my downhill bike into an air bag. Unfortunately, I couldn’t practice the back flip on hard ground before but I still wanted to nail the flip off the step down. In the end, I was happy I made it without getting hurt.

You jump on house roofs and cars. Didn’t you have problems with the owners?
My neighbors were very nice and courteous. After a short talk, they gave me permission to ride on their roofs. With a little persuasion, I also convinced my brother to lend me his car – not sure he will do that again though!

Want to see more of Fabio in action? There is also a behind the scenes clip, showing the challenges Fabios faced in making these incredible videos. You can watch the clip here:https://youtu.be/hYkB7laXS8o