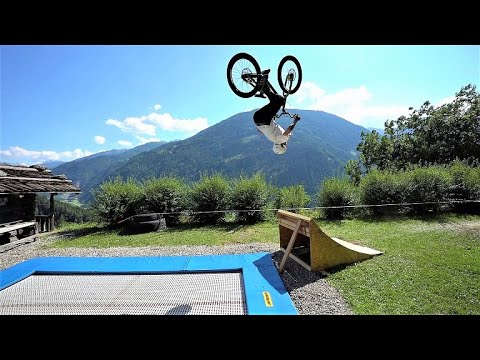 Gabriel originally planned to focus more on the Downhill Season in 2020 and to participate in a few World Cup races as it would have been his last season in the U19 category. “However, Covid-19 put a damper on my plans and almost all races were cancelled, so we used the time wisely to realize a slightly bigger project,” said Gabriel about this year’s situation. He is already looking forward to the day when he will be finished with school so that he can fully concentrate on his riding career.

In his latest video “An Almost Perfect Dream” which he shot this summer in his home region of East Tyrol, the high school student dozes off while calculating binomial formulas and dreams of what he likes to do best – tricks on his bike. Right at the beginning, the 18-year-old impresses with a mind-blowing Backflip-Frontflip combo on the trampoline. Afterwards, Gabriel continues with a number of spectacular tricks, some of which took Gabriel up to six days to learn. The final front flip into the “Tristacher See” lake brings the 18-year-old back to reality and to his math tasks.

Some Making-Of clips of his newest video will be released soon and are definitely worth watching.

Needless to say, Gabriel is proud of his video project and excited to see the three months of hard work pay off:” The original idea for the video actually came to my mind after a long day at school. Who doesn’t know the feeling of being knocked out and tired and then taking a nap? I had a dream about THE perfect bike day. Then I suddenly woke up because I had a crash in my dream, haha. So, the idea for the clip was more or less pretty random, but I think the video is really worth watching.”