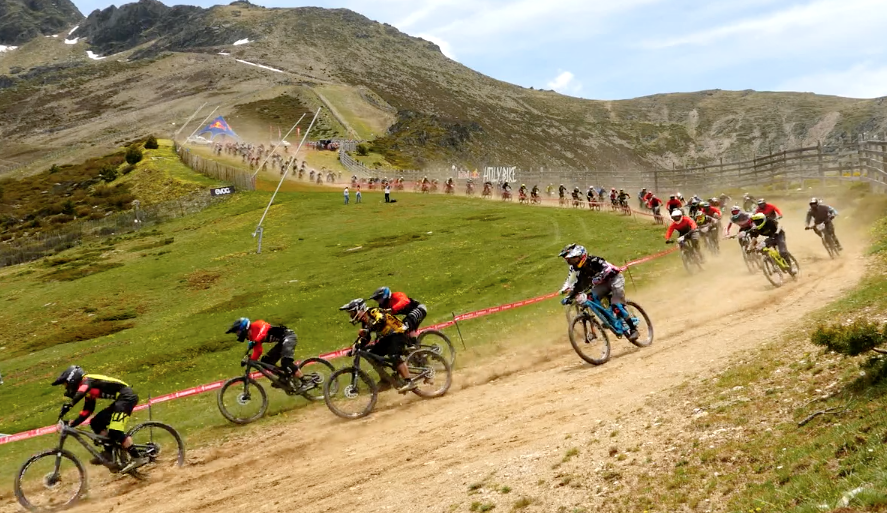 The second edition of the Red Bull Holy Bike took place the 4th and 5th of June at La Pinilla Bike Park, with more than 600 riders who had to race Downhill, Enduro and Avalanche with a single bike.

The level of riders was high: Filip Polc, Iago Garay, Toni Ferreiro, Rae Morrison, and more, and the tracks were in mint condition due to the effort of the Bike Park in the past months.

The whole event goes around a party on bikes, with DJ’s, BBQ’s, the chair lift is open, a night run, and free drinks for everyone.

Everything started on Saturday morning with the training runs, when riders could spend four hours of training with the chairlift open.

At the afternoon, a big storm arrived at the ski resort and after two hours of rain and hail, one of the two timed section took place, starting by pairs, and where you can choose which mate you want to race on your run. The best time on Saturday was that of the international rider Toni Ferreiro from Evil Bikes.

Saturday ended with a spectacular night downhill ride at the Bike Park, which finished at the Red Bull’s chill out area, with music and BBQ for everyone for free.

On Sunday, there took place another timed section, which was the harder one due to the long track, with some climbs and fast downhill sections. It was a mix of three different tracks. The best time was by the local hero Iago Garay from Santa Cruz – SRAM.

The Golden Brooch was the Avalanche event, a massive race from the highest point of the Bike Park, which made rider Ferrán Jorba and Newzealand’s Rae Morrison as winners of the Red Bull Holy Bike 2016.

If you want to visit La Pinilla Bike Park, it is open all weekends and non-working days from May to October, and just one hour from the Madrid airport by car.