This stage kind of changed our game, and team MTB-MAG.COM didn’t perform as expected today! To give you an update on the results: we placed fourth with a gap of 18 minutes to Team Moustache and 11 minutes behind Bikeschule Olten. With World of MTB leading far in front. In the overall ranking  we slipped back to fourth overall (damn it!).

And while for tomorrow’s stage we are super excited to go to Zermatt and take hopefully a look to Magic Matterhorn, s’Hörnli as the Swiss say, we are not sure if we can catch up the 1:15 minute gap in overall to pass Bikeschule Olten in order to be on the podium.

In total, today we have been racing 63km with 1650m of elevation gain and 4300m of downhill sweetness.

Business as usual in the morning: get up early around 6 am, have breakfast, prepare race gear, tools and backpack, go get the bikes at the guarded bike garage, warm-up and then again at 9:00 am start from the starting line.

The start went OK, heading out from the first row. Andrea was leading for the first 50m until we reached the climb. But very soon after Andrea couldn’t breathe properly, his lungs were not getting enough oxygene for the steep climb. And while I still tried to pull him to the top of this first 25% gravel climb, he could not manage to follow the race leaders. I waited for quite a while at the top so that we could ride the descent to Kalpetran together. I was still right behind one of the Moustache racers and had no issue to power up this knee-breaker uphill. In the downhill, the pro mixed team from Ride Magazine with Anita Gehrig and Balz Weber passed us.

So we teamed up with Balz and Anita and went to check-out point #1. 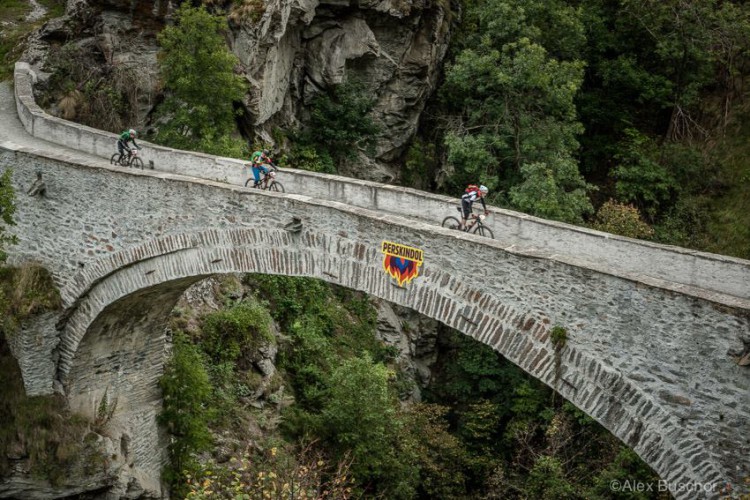 Andrea claimed he was suffering a lot and not being able to breathe due to an influence he just had one week prior to the race. Normally he is known to be the uphill meister, doing extensive, long and fast climbs in his Lugano Ticino homeland. But Meister Capra could only get 50% of his power output today. What a pity! In my mind I already wrote off this race and we kept going, trying to enjoy the magnificent mountains.

We were heading by shuttle into the Saas Fee valley. All new tracks and a landscape and scenery that you need to see as well. We ride every day trails that need to be on the to-do list of every real mountainbiker. One highlight is chasing the next. 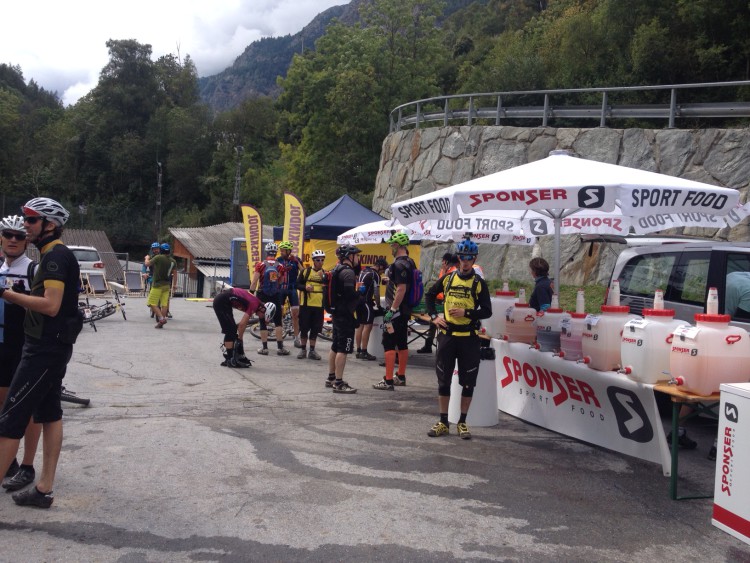 We were dropped off  in Saas Grund, taking the gondola up to 2400m altitude. The next stage was, I believe, the longest of the whole week, and had a distance of more than 45km. We started again all the way up going into the Saas Grund valley first on a high mountain rocky singletrack, the down the mountain on switchbacks winding down between the pine trees. Then connecting to the other side of the valley and climbing for a long long time all the way to Saas Fee.

And what a surprise, Andrea kind of recovered a bit and I asked him to give the pace. We were climbing pretty fast this long ascent and catching some Epic teams which had already some more uphill meters in their legs. Unfortunately there was no time left to do some sightseeing in Saas Fee.

Then the race track pointed again down the valley and we followed an impressive white water river called Sauser Vispa. The race was on again for us! Almost at the bottom of the valley at Pollern, we passed team AMB Mag who had a pinch flat. This was motivating since we had to let them go before. We reached the main valley in Stalden going over the ancient rock bridge and took the same climb to Kalpetran.

One long shuttle up to Grächen and Hannigalp followed plus the same final stage of yesterday down to the finish area. We were quite happy that we finished without another mechanical and also bringing ourselves and especially Andrea back to Grächen in one piece.

Overall not the greatest day but also not the worst. Everything can happen in racing and even more in a long stage race like the Swiss Epic.

Never give up and keep the flow! 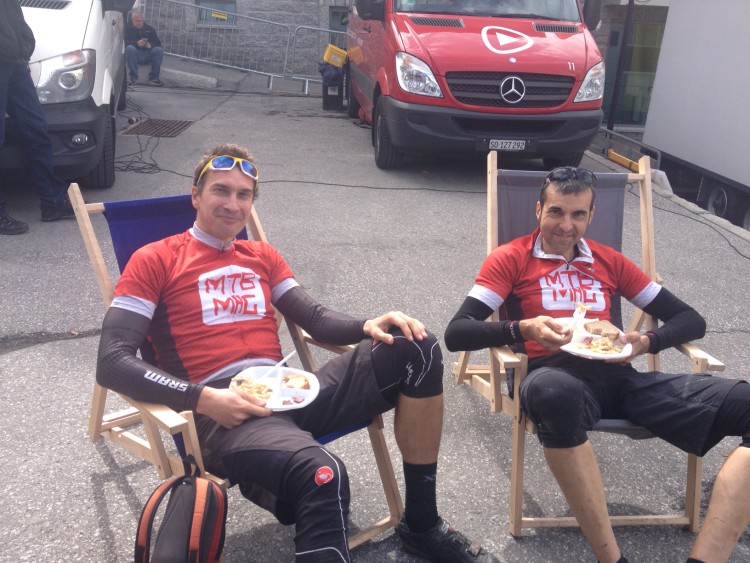