The Syncronicles II  THE RAMP

The roots of a dream

It all started 1988. I was a 7 year old kid, when we moved from Prague, Czech Republic to Germany and I got my first BMX bike from my mom for birthday. It had lights, fenders and reflectors all over and I was the happiest child you could imagine. The park nearby was my playground to skid and race around the blocks with all the other kids. I had this BMX and I knew from all the pictures and TV that these bikes can make me fly. I started to use some old wood and built some small jumps to get a few inches airtime under my wheels. From that point I have been a daydreaming kid, drawing bmx jump-lines in my schoolbooks and imagined where I could jump around on my bike. That cycling thing got me and helped me through difficult times as my mom died of cancer a year later. I grew up in an orphanage and riding my bike has been more than just playing around. It helped me to deal with frustrations and symbolized freedom.

10 years went by, I was 17 and meanwhile working in a local bike shop after school. I started competing in a couple European Dual Slalom races. Soon I had a few small sponsors from the bike industry who supported me with some bikeparts. At my first Worldcup I met and raced against my Heroes like Brian Lopes, Dave Cullinan and Mike King. Its been a new world that opened up for me and all I wanted is be part of it. Every day after school I went to the local skate park and jumped the ramps for hours and hours. Some friends of mine from the racing scene had a mobile ramp set-up to do some shows on different happenings in some small villages around. We made some cash which helped us to pay our expenses for the races. A year later I made my drivers licence and dreamed of a life in a van, travel around, ride and race bikes all day long and make some money through shows with a own mobile ramp set-up.

Lost in the adult life

After I finished school another three years went by and I made my degree in wholesale and foreign trade. When I left the office on my last day, I never turned back to this job. I knew I would find a way to make a living by riding bikes. I sold everything I had except my ridig gear, my bikes, surf- and snowboard and moved with the few things I owned into my 890,- Euro VW T3 van I bought on ebay. I travelled, raced and lived my childhood dream. But I made my money as a bartender in Munich and not with a ramp-shows. One year later I finally got my first propper contract with Specialized in 2003. I got a new, faster van, made money and had to pay bills. All of a sudden I found myself in the adult life.

Somehow along the way I lost that ramp-idea . I guess I grew up. Life got accelerated. I hurried from event to event and got lost in the the business world of the bike industry. I lived a life on the fast lane and set focus on other things in this competitive world. Two years later the fast new van broke and I moved back into my old, slow one. I quit the job at Specialized and re-organized my life around the values that really motivated me to ride and so I moved on.

Amazing years followed. I got the chance to travel the world, I rode some of the finest trails on different continents, met amazing people and learned a lot about other cultures. I‘m so thankfull for every singe experience and opportunity to travel and more than happy I can still call it my job until today.

Now, I‘m a 35 year old man with a beautifull family, a restored andventure mobile and a almost forgotten chilhood dream. I knew, one day had to build it. As a freeride athlete I always look at landscapes and imagine what a rideable line could look like. I see ridgelines, natural spines, wallrides or landings everywhere… The only thing missing would be a massive mobile ramp.

The ramp: a bike connection project

When I started restoring my Syncro van, I knew it was time to turn that dream into reality. I felt the excitement like the 7 year old kid again I used to be. I had this idea to use the van as the solid ramp element. With its great 4×4 abilities, the van could be placed wherever I find a natural landing. I came up with some ideas and involved my riding buddy Sebastian Happ, who is a genius when it comes to extraordinary constructions and ramp design. He calculated and messured my crazy ideas into a building instruction for a superkicker made out of stainless steel and aluminum. I involved another friend of mine I used to race with in my early Dual Slalom races: Nicolas Thrun. His family business is specialized in production of stainless steel food silos and he helped us with all the transition parts and bending it accurate to 5,5 meter radius we needed. I bought 12 offroad sandsheets to connect the transitions and use these as my grippy and solid riding surface. 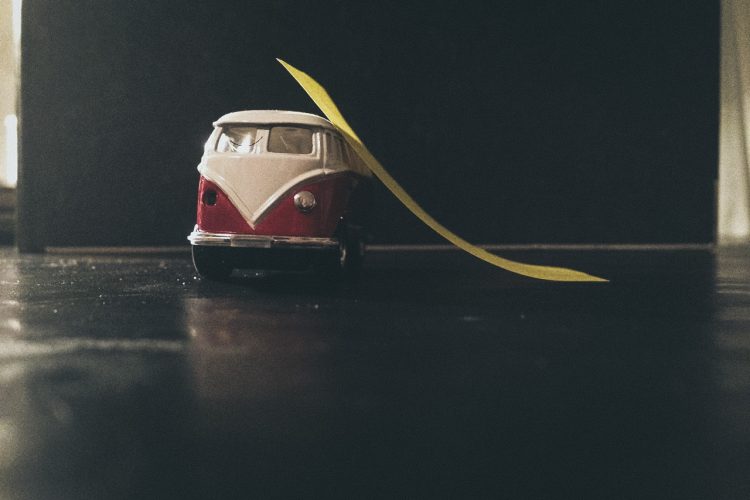 Then I needed to find a transport and mounting solution. For that I use my roofrack with multiple attachment points on top. I connected the single ramp parts in a way that they also work as outfolding „wings“. I needed some custom made stainles stell bushings, made by another bike buddy, Flo Bleyler who is a precission engineer. That way I can use it as an awning on one side and for my hammock on the other when not in use as a ramp. For the awning I got help by one of my closest friends Leander Angerer who I started racing with back in 1998. He sew a custom fabric for me to fit the tranistions in his „Racing Atelier“ workshop. At last I found a solution to transport all the aluminum sandsheets under the car to have the aditional weight central and low distributed.

The only thing missing: a landing. It was deep winter in January when I had everything finished. I‘ve set up the ramp only once before to see if the construction itself works, but I havent jumped it yet. Nevertheless I packed my new built Evil Wreckoning bike and everything I needed for a 3 Months adventure road-trip all the way down to the Atlas Mountains of Morocco. It has been a destination I always dreamed of visiting with my own car. 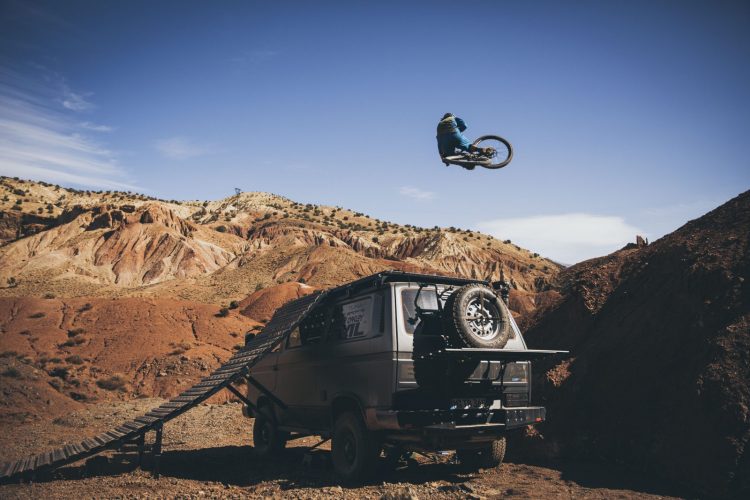 The time has come to finally live my childhood dream. It seems like it took me a lifetime to get there. But finally I arrived where I always wanted to be: In my own imagination of what Mountainbike riding means to me: infinite freedom (and the possibility to launch myself into orbit)

A massive THANK YOU goes out to everyone who helped me building this. You guys rock. I want to see all of you this summer hit the ramp at the lake jump!

And THANKS to ION bike, Evil and Spank for supporting this journey! I owe all of you a beer or two…

Last but not least: THANK YOU, Sebastian Doerk for joining me on a trip of a lifetime and capturing the epic shit.