Danny’s latest video, a We are Peny Media production directed by both Robbie Meade and Danny, shows Danny scrambling to just below the summit of Sgurr Dubh Beag / Little Black Peak (733m / 2,432ft.), one of the most technical sections of the Dubh Ridge, unroped with his bike on his back. From here the real challenge begins. Set against the magnificent backdrop of unrivalled mountain wilderness views, Danny navigates his way down an extremely technical one kilometre route over a very steep ledge system of black ‘boiler-plated’ Gabbro slabs, exposed steps and drop offs, buttresses and grassy clefts, to the shores of Loch Coruisk at sea level. 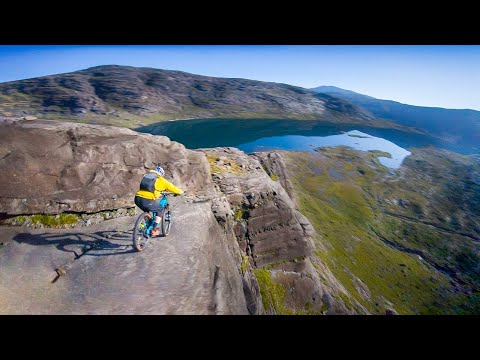 Hi Danny, hope you are doing fine. Last year you went to the gym, now you are tackling a rock slab in a freeride mountaineering manner. Where did the inspiration for this project come from?

Danny: One of the sports that has really captured my imagination over the last few years is climbing and the dedication that these climbers put into certain routes. It’s amazing watching guys like Adam Ondra, Alex Honnold, Julia Chanourdie, Margo Hayes and particularly Tommy Caldwell. I am really inspired by watching these climbers setting new routes and new grades in their sport. These girls and guys are dedicating years of their life to these routes. 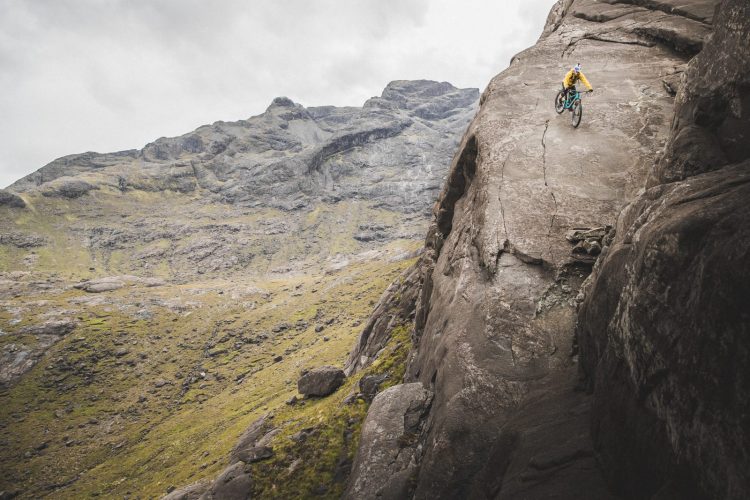 How did you transfer this inspiration to the bike and how did you get this project started?

Danny: I thought it would be pretty cool to find some big slab of rock that obviously can’t be vertical, well at least not vertical for very long. The idea is basically climbing the rock and descending these big slabs. I’ve had some other projects on the line further afield in other countries that were based on the idea of tackling some rock faces but unfortunately because of Covid the plans changed and I had to start looking at home. I did a bit of a research and found the big Dubh Slabs right in the heart of the Cuillins where I filmed The Ridge back in 2014. This is a 500 metre slab of continuous rock. It’s a very remote part of Skye which is already quite a remote place. We managed to get hold of a local fisherman that would take us across by boat to the loch at the foot of the slabs. From there we had to walk a couple of miles inland and then there is this amazing face.

So how did you prepare and approach the face?

Danny: The Dubh Slabs are known as one the UK’s best scrambles/moderate climbs were you not necessarily have to use ropes, but you still feel quite exposed. It’s very stable and grippy rock but quite intimidating to walk up. I of course scouted the route previously. I actually rode to the area by e-bike, climbed up on foot and called out what I wanted to try when actually being on the rock with my bike. I had a rough idea of a route from top to bottom on the slabs.

Some parts look insanely steep. Can you describe how steep it really is?

Danny: There is one part in particular, the last 100m of vertical which on the first day was just not possible to ride. One big, long face of rock with no features to really work with. And if the bike would just be running or the tires losing it, it would end up really bad. I would say this last slab is maybe over 60 degrees, continuous with no real places to brake. It’s hard to describe, but it’s a funny feeling when you are on the rock. You literally feel gravity just pulling you down the rock and when the only thing is stopping you is your brakes you really feel how steep it is. My brakes and tires were right on the limit especially at this last slab, where I had to slightly traverse the face. Towards the end if you look closely, I have got two fingers on the brakes to try to keep myself under control. 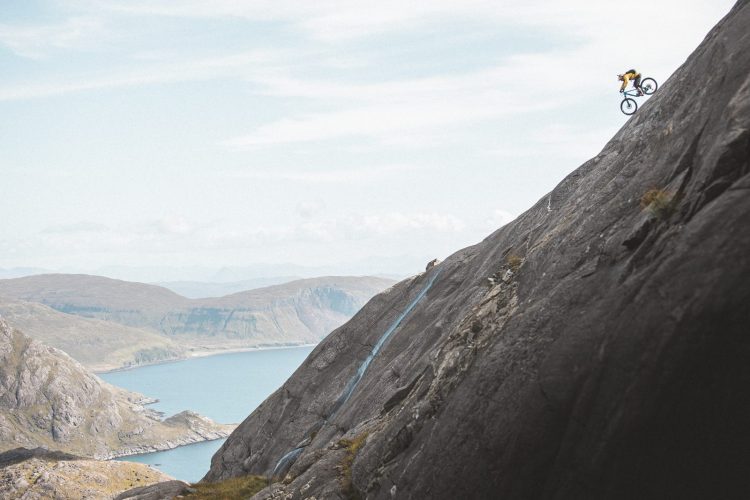 Do you feel any fear at all when navigating down these rocks?

Danny: I felt a lot less fear doing this project than doing smaller tricks like going upside down with the trailer on the back in Danny Daycare or doing the front flip in Cascadia. I thought it felt really relaxed and comfortable. Feeling out the rock, feeling out my tires and brakes, what was possible and then just kind of letting it flow. Just trying to stay in control. It’s not like climbing with ropes. I am basically learning how to do this stuff but there is no safety involved – no rope. You make calculations as to what could happen if things go wrong, but it’s best maybe not to think about it too much, rather to think about the positives. There are some kind of slabs in there that have no runout at the bottom, once you go into them there is no way of stopping so you are fully trusting your brakes and tires.

Speaking of brakes and tires. What was your setup for this project – any special modifications?

Danny: I was riding my Santa Cruz 5010, which is normally their 130mm travel. I did toy with the idea of running a bigger suspension bike, but I am really comfortable on the 5010 and didn’t really feel that suspension travel was important. The only modifications I did do to the 5010 was to put on a 160mm travel fork on the front where you would normally run a 140mm travel.

In terms of brakes I was running the Magura MT7 with a Magura MDR-P rotor in 220mm on the front and 200mm on the back which on that small bike made the brakes super powerful. Furthermore, I had Magura performance pads on the front and used some prototype HC3 levers made for my trials bike which were slightly longer to get me even more power. I set these levers on the most powerful configuration – so all in all the most powerful brake setup that you can have on a bike. It made me feel so comfortable while riding down there. If anything would really stand out it was between the brakes and the tires. 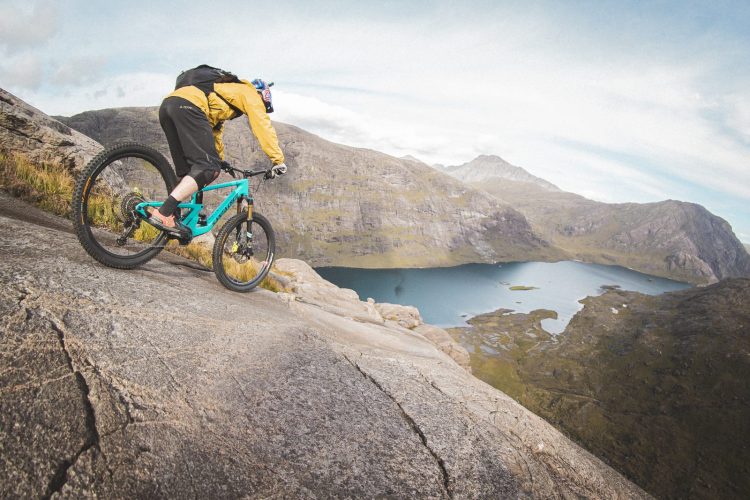 So which tires did you go for?

Danny: On the first day we were there I was running kind of normal Continental Enduro tires which are already very grippy on the rock, but some of the places I was planning to ride were very extreme in terms of what’s possible to ride your bike down and staying in control. Some of the lines I had in mind I wasn’t able to ride into because I would have probably been dead if I tried. After the first day we were really happy with the footage but the project wasn’t quite how I wanted it because I really wanted to ride the entire line. For the second day I managed to get some Continental Downhill tires which have a softer compound on them. We went back to the slabs and this time I managed to ride the parts I was too scared to before, especially the part on the pretty exposed cliffs where you really have to stay in control of your speed because it’s not possible to come to a stop.

Your original discipline is street trials, but we see you more and more on the mountain bike and e-bike. Which skills helped you most?

Danny: You’ve got to be a well-rounded rider and there’s a probably only a few folks that would look at riding this kind of stuff. I’ve been riding loads of mountain bike and I’ve done over 8,000km on my e-bike in 2020. I guess it is a combination of all the different kind of riding I have done over the years.

So we talked about the bike setup, what was your plan regarding filming and gear setup?

Danny: I wanted the riding down the slabs to be as visual as possible and have a lot of on-board perspectives for people to feel like they are there with me. That’s why I wanted to film this on my GoPro. I had a GoPro Hero 9 on my head and also a GoPro Hero Max on my chest and we had one GoPro Hero 9 on the racing drone. We also had a Hero 9 on a pole we used for some shots. 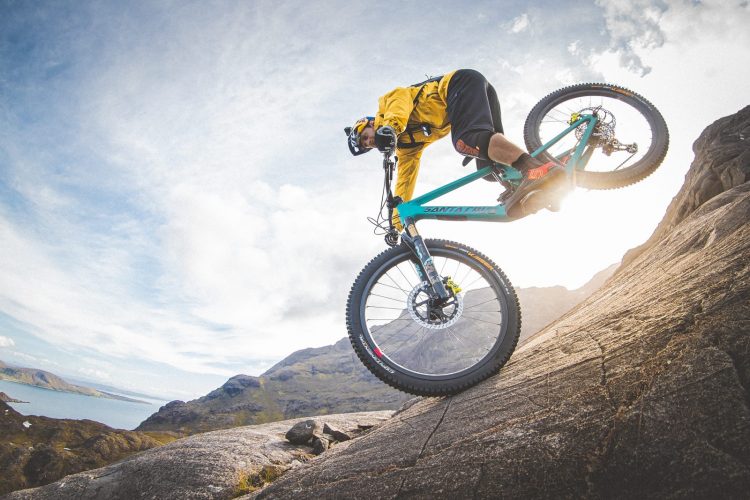 You’ve been using GoPro cameras since 2012. How has the tech developed and advanced?

Danny: The Hero 4 we used for Cascadia was doing an amazing job back then. But the quality difference today, the stabilization and all other features allow us to do so much more. The Hero 9 that just got released captures exactly what you are seeing. It’s an amazing tool to work with.

Music plays an important role to you. How do you choose the right track?

Danny: Music for my films is always so important to me. I would say it makes at least 50 percent of the viewing experience. I am really passionate about music and I must have looked through at least 10,000 tracks for this project. You want the music to fit the riding and emotions and ideally fit it into different sections.

Who was part of your crew?

Danny: I had an awesome crew who I worked with many times before.

Robbie Meade (We are Peny) and me as directors, Andrew Lawrence (FPV drone), 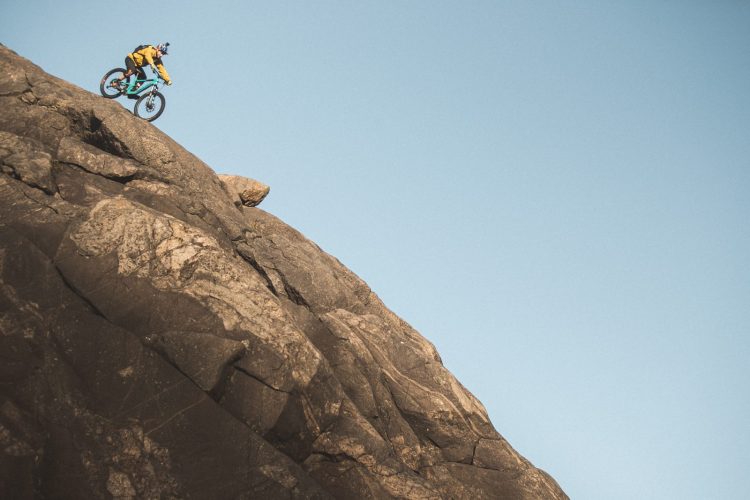