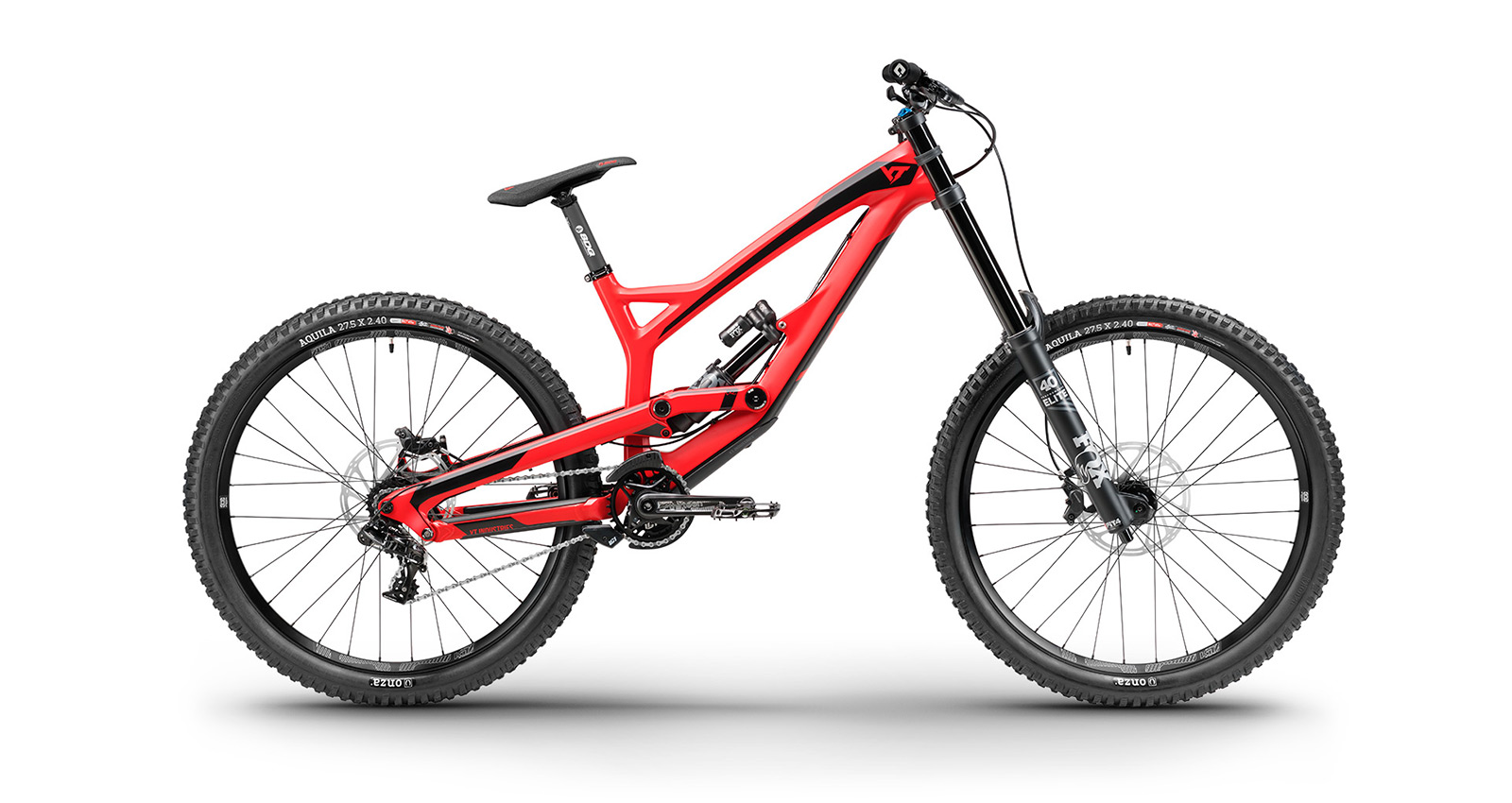 YT is offering up a bit of an explanation into their latest marketing campaign, which as in years past is quite murky and intentionally mysterious. They’ve also decided to reveal their 2018 lineup. The biggest change is in drivetrain choice with a great deal of spec featuring E.13’s wide range eleven speed kits. Anyhow, full details in the press release below.

The four non-mountain-bike related talents were joined by YT riders Aaron Gwin, Andreu Lacondeguy and Vali Höll on the www.findyouryoungtalent.com microsite. The empowering campaign has served as a prelude to the unveiling of an evolved logo, strapline and the release of a YT documentary – chronicling the full history of YT, from 2008 to the now. Just about when YT is heading towards their 10-year anniversary.

The new YT logo, ‘Live Uncaged’ strapline and documentary are unveiled today on www.yt-industries.com and the campaign microsite www.findyouryoungtalent.com. The evolved branding and strapline unite the old and the new, YT’s youthful energy, badass confidence, and agelessness to reflect the true core of their brand.

What Is Young Talent? Young Talent is what YT stands for. It’s inside us all. It’s up to each of us to find our young and undiscovered talent, to overcome conventions and pursue our dreams. This is exactly what CEO Markus Flossmann did, when he founded YT 10 years ago. YT has stayed true to that founding ideal and has always done things their own way. From selling direct and ditching the middle man to redefining the sport itself with bike breeds like the CAPRA, smashing the trail bike scene with the rule-breaking JEFFSY and writing history with Aaron Gwin dominating the World Cup on their downhill weapon TUES.

“Over the last decade I’ve realized that Young Talent has nothing to do with age,” explains Markus.

It’s this way of life that utterly defines YT and their bikes. YT is about riding. It’s about refusing to be caged. It’s about finding your passion. It’s about building the perfect tool for every kind of rider, in order to allow them unleash their own potential – bikes that let everyone do whatever they want. “And today, years later, we’re still exploring our young talents, overcoming age and conventions. All so you can uncage yours too.” You are confined only by the bars you build yourself.

The new YT fleet is available now on www.yt-industries.com. Brand new specifications, high quality designs and the return of the DIRT LOVE make for an exciting start to the new season.

JEFFSY 27 and 29, TUES and DIRT LOVE are once again available in the exclusive flagship paintjob “Liquid Metal” and will certainly turn some heads out on trails and parks. In line with their philosophy of providing the right tool for every type of rider, there are plenty of builds available: from more affordable entry-level machines to exclusive premium race rigs, boasting a focus on maximum performance.

And true to their core YT again push boundaries with the component selection. Always looking for more from their components YT has defined Eleven+ as THE DRIVE OF 2018 for their JEFFSY fleet. They exclusively use the new 1×11 e*thirteen TRS+ Cassette with a 511% gear range, outperforming traditional 12-speed transmissions by 11%. This 11speed system is not only lighter, but also distinctly more durable and much easier to adjust, making it the perfect package for at least 11% more #GoodTimes out on the trails.

Whether you prefer 27,5” or 29” wheels – the JEFFSY represents YT’s very own definition of trail riding. With gravity DNA, JEFFSY is the most aggressive all-mountain bike on the market for all those of you, who want to ride a tad faster, more aggressive and more creative. 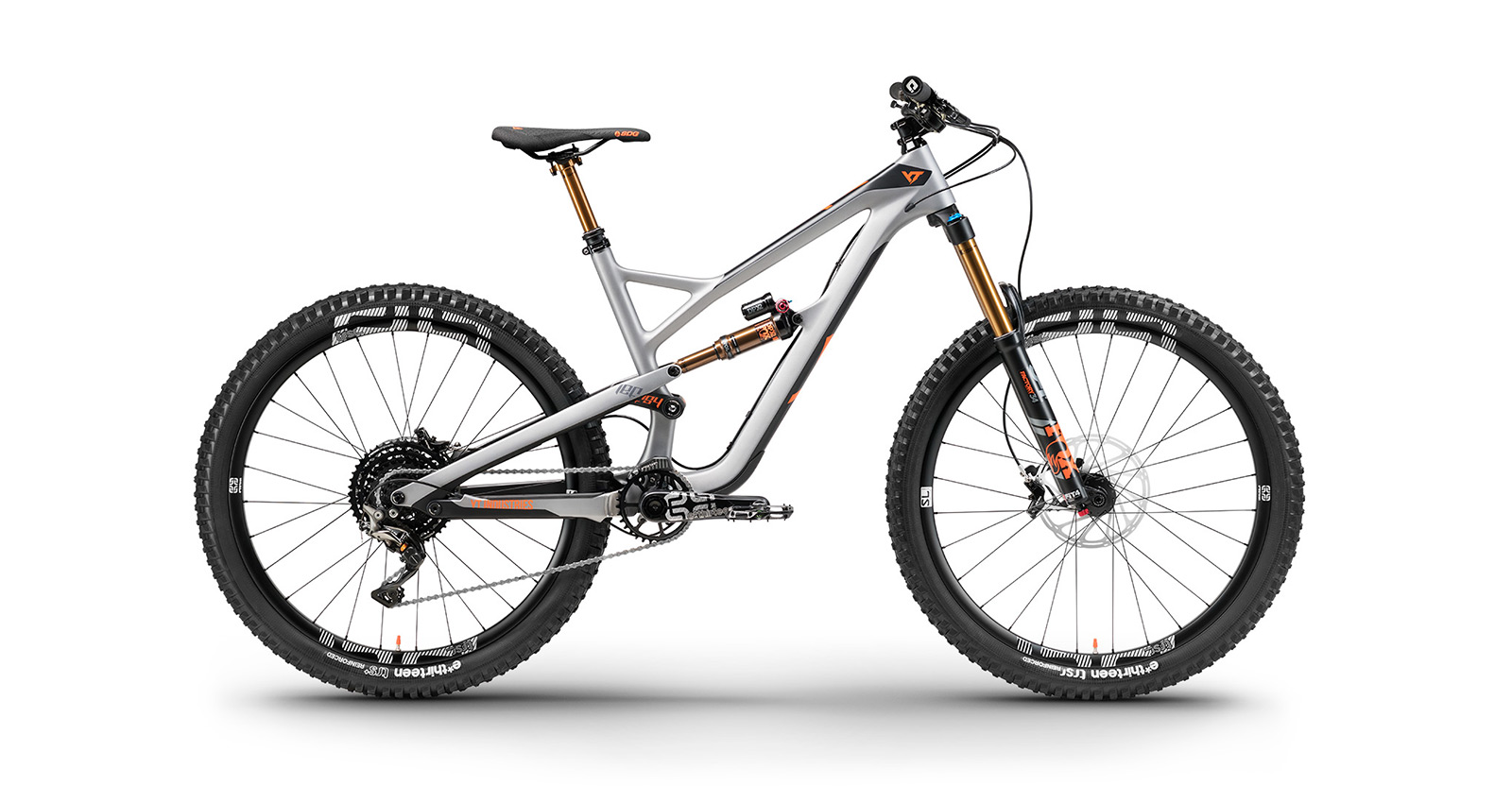 The flagship JEFFSY CF Pro Race is a bike ready to race. Every aspect is tuned for uncompromising performance. It’s a premium ride with only the very best components: Kashima-coated FOX Factory suspension and FOX Transfer dropper post, SRAM Guide Ultimate brakes, Renthal cockpit and the e*thirteen TRS+ race-proven wheels and cranks to name but a few.
The JEFFSY CF Pro is equipped with equally careful selected premium components, such as the FOX Float Performance Elite suspension – offering excellent responsiveness and racing-level adjustability. 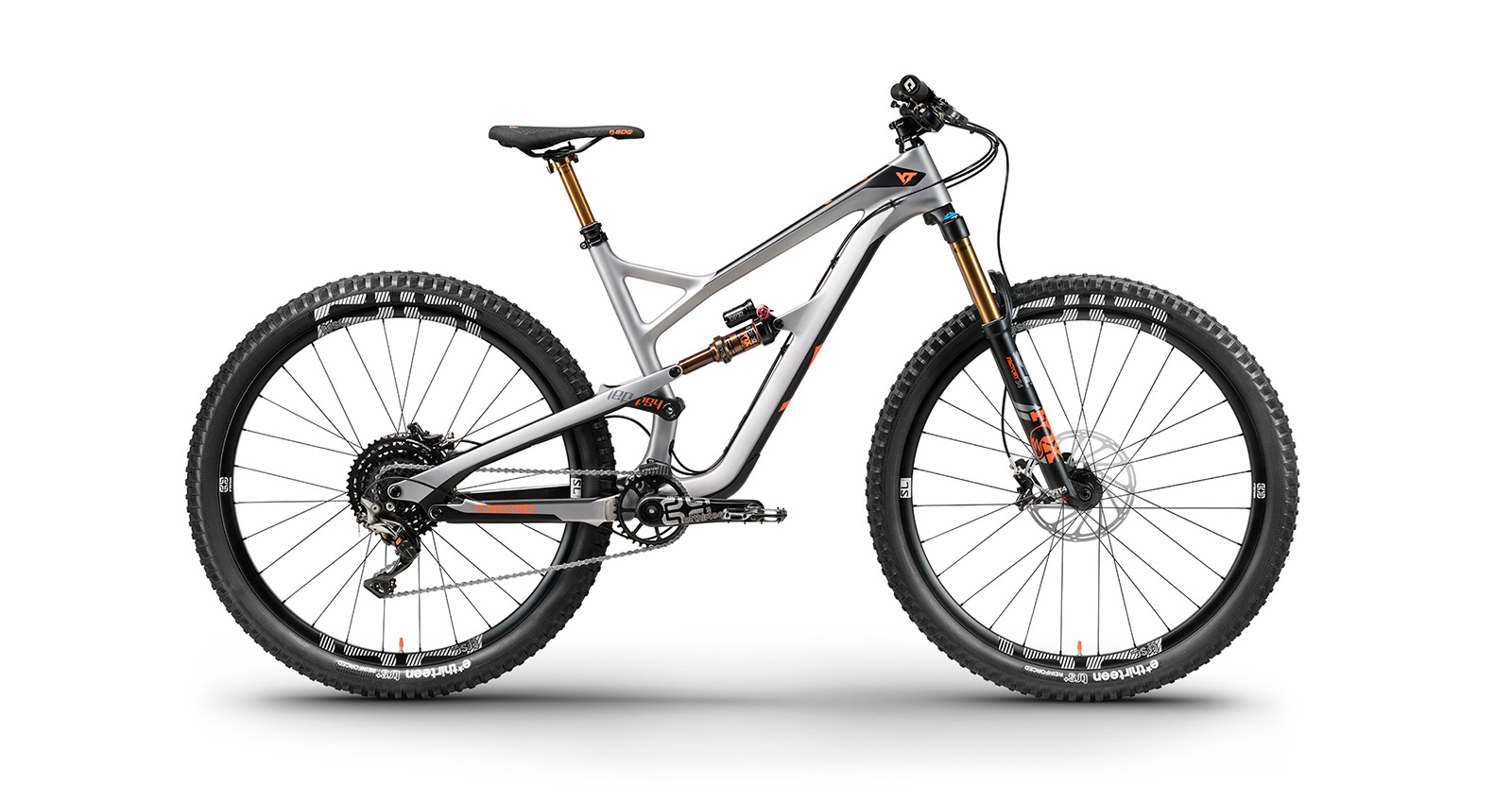 The JEFFSY CF and AL Comp models boast a Rock Shox suspension with perfect performance and easy adjustment settings. The JEFFSY AL marks the starting point for serious trail riding. Naturally, it’s tailored to the needs of the ambitious entry-level rider. However, sophisticated geometry and a well thought-out, high-value parts spec are raising the performance bar in this segment making this version an enticing option for experienced riders, too.

The TUES is capable of anything. Set it against the clock and, as Aaron Gwin has been proving since 2016, it can dominate World Cup racing. Point it down the craziest slopes of the Rampage or the FEST series, on the other hand, and it’s the tool for un-rideable lines, colossal jumps and loose whips. 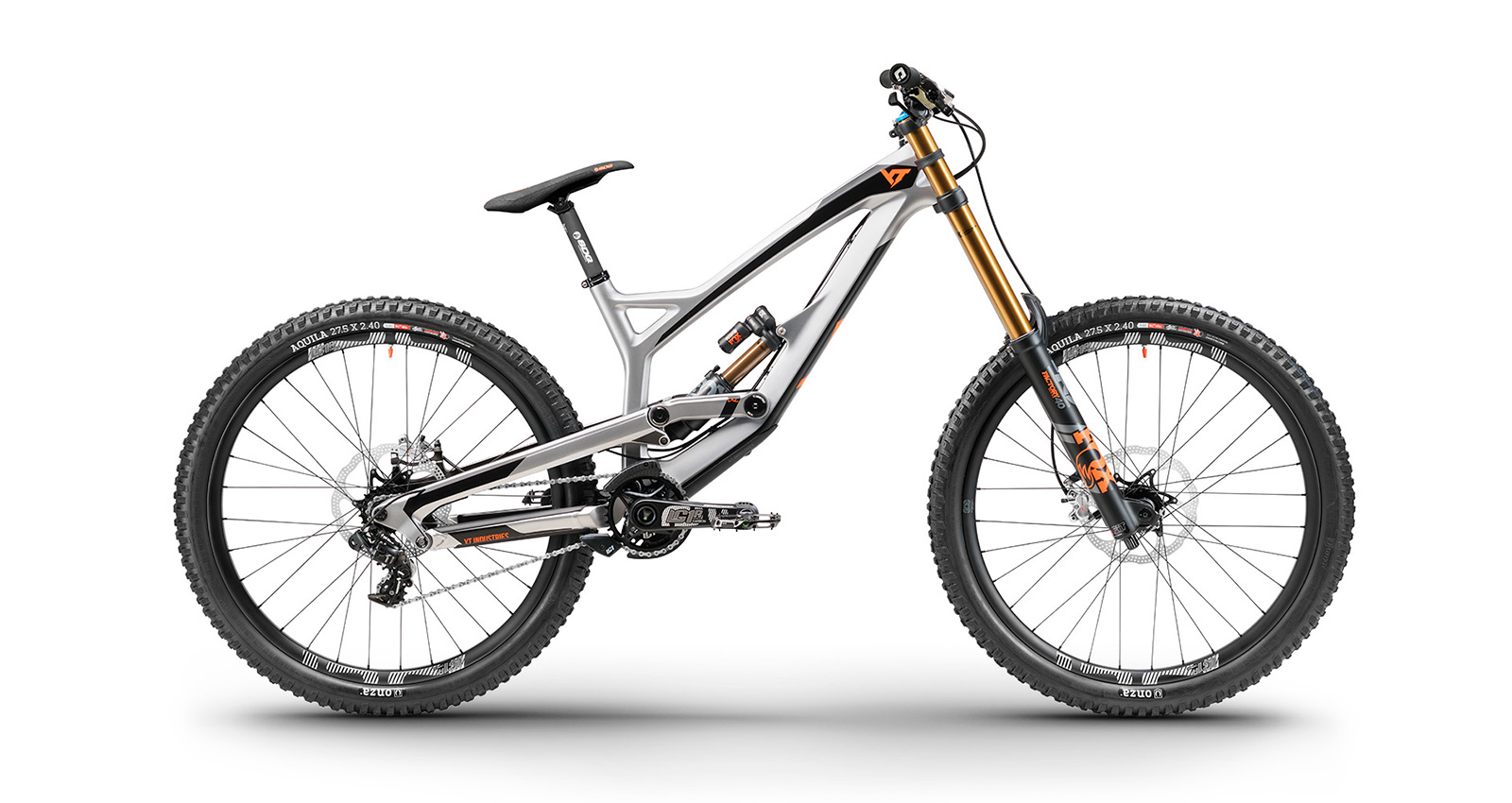 The TUES CF Pro Race version is for all those, who would like to have a bit of World Cup taste in their garage. For the 2018 model YT is using exactly the same build Aaron Gwin is racing in the World Cup. The premium suspension package consists of the Kashima coated FOX 40 FLOAT Factory fork and the FOX FLOAT X2 Factory shock. With the EVOL air spring technology featured in the fork in 2018 this package truly delivers World Cup pedigree. YT furthermore specs the TRP G-Spec Quadiem brake, one of the most powerful and reliable brakes on the market. A Renthal cockpit, the e*thirteen cassette with just 180 grams and a 233% range as well as the e*thirteen LG1r Race – an incredibly light yet extremely robust downhill race crank – complete the package.

The TUES CF boats FOX 40 and FOX Float X2 suspension, with the fork also featuring the EVOL air spring technology. The new SRAM Code RS brakes have been given a complete overhaul for 2018. They combine impressive braking power with excellent modulation, and offer both bite point and reach adjustment for the levers with fade-free performance even on the longest, steepest runs. Young Talents galore: a YT must be competitive and thanks to their roots, YT understand this applies to an entry-level build as much as any other. The TUES AL ticks this box with ease. Performance comes as standard with excellent geometry and outstanding component selection. A hell of a machine, the TUES AL offers a flying start in the downhill game.

The roots of YT can be found in dirt jumping, which is why a lot of development work has flown into the DIRT LOVE and that’s how technology usually only found in aluminum frames has crossed over to revolutionize the DIRT LOVE’s steel: hydroforming. Yet again YT prove they don’t do things like the mainstream. While other brands have moved to building dirt frame out of aluminium, YT keep to the steel roots for dirt frame, as the material offers more flex, while at the same time the hydroformed, double-butted CrMo frame is stronger, stiffer, and lighter than comparable steel frames. 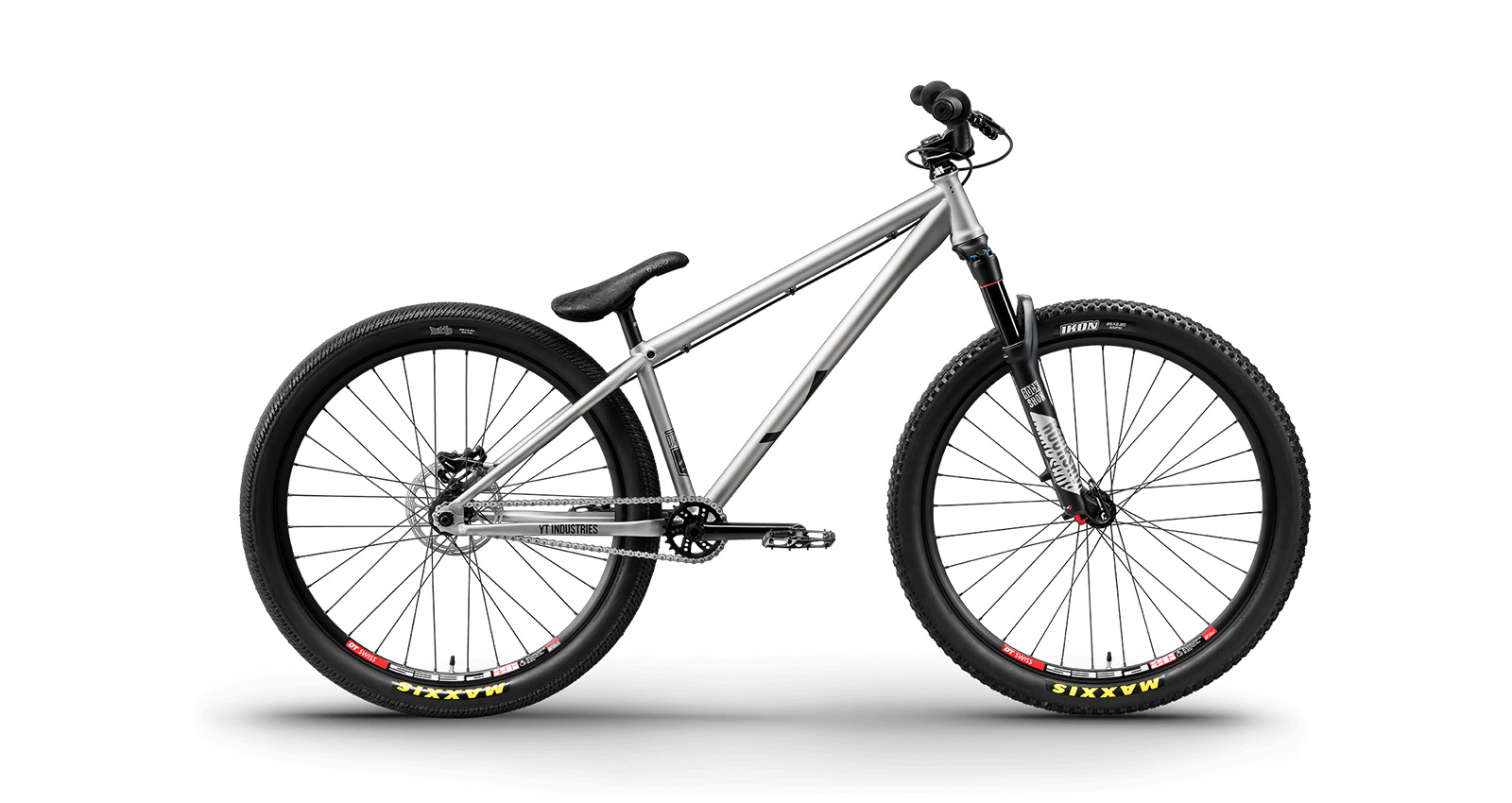 The Pike DJ used for the build is the designated fork for all this progression. The hardnut brother of the award-winning Pike features a sturdy 35mm chassis, yet is both light and stiff. A custom-tuned charger damper shines on any type of jump, and the similarly jump-honed Solo Air spring offers significant end-stroke ramp-up for buttery smooth landings. SRAM Level TL brakes are feather-light heavyweights that inherit well-proven tech of SRAM’s Guide trail brakes, while super strong DT Swiss 533D wheels are built to expect the odd over-rotated trick and dirty landing. 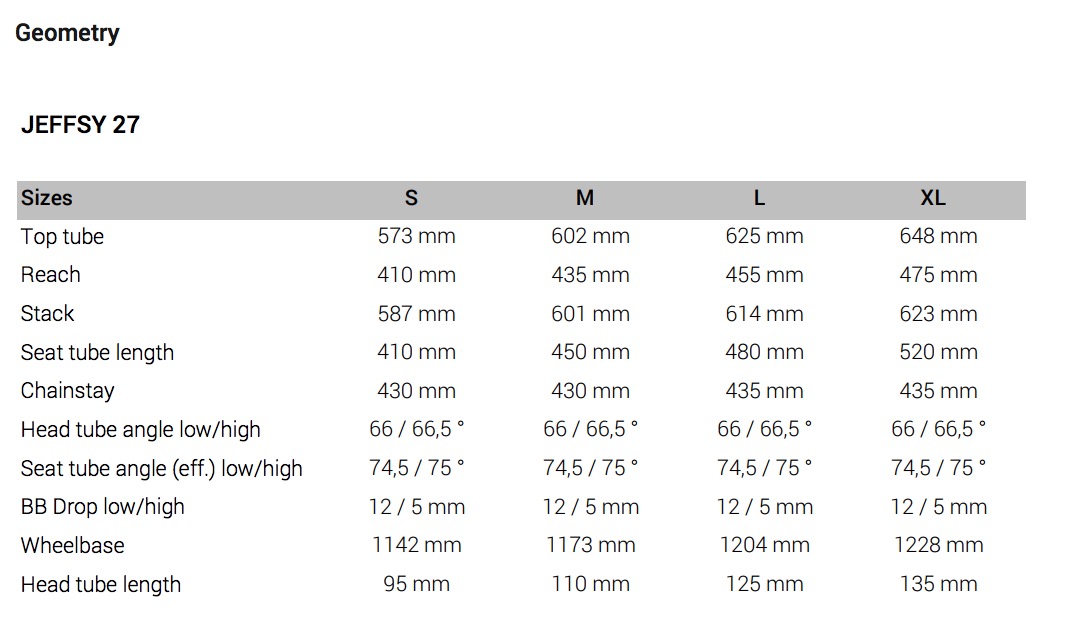 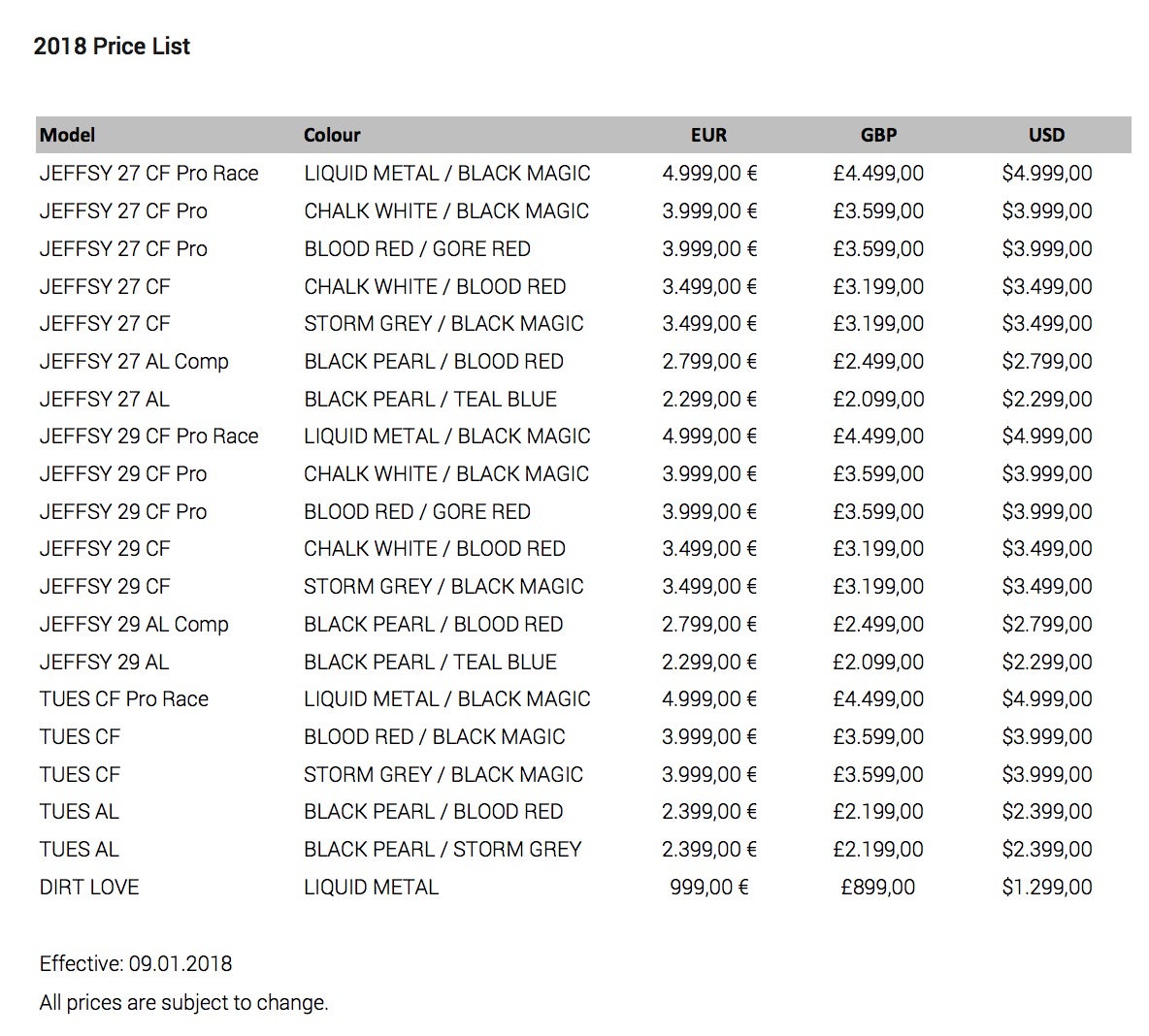 Go to www.yt-industries.com for more detailed information about the 2018 range.