Inspired by our series of monochrome photos initiated by professional shooter Ian Collins, we take a delve into Alex Boyce’s archive and come up with some previously unseen pictures of the Santa Cruz Syndicate and Cedric Gracia over the last 4 years at various occasions around the DH race and Enduro circuits. We selected shots that take a look at possible key moments the Syndicate contributed to and that people may not have previously seen. In addition the more we shot with the Syndicate, the more we also discovered that Cedric Gracia although not officially part of the team, was ever present, including at all their bike launches and race meetings, in all and sense of the purpose he was an unofficial official member of an exclusive club. 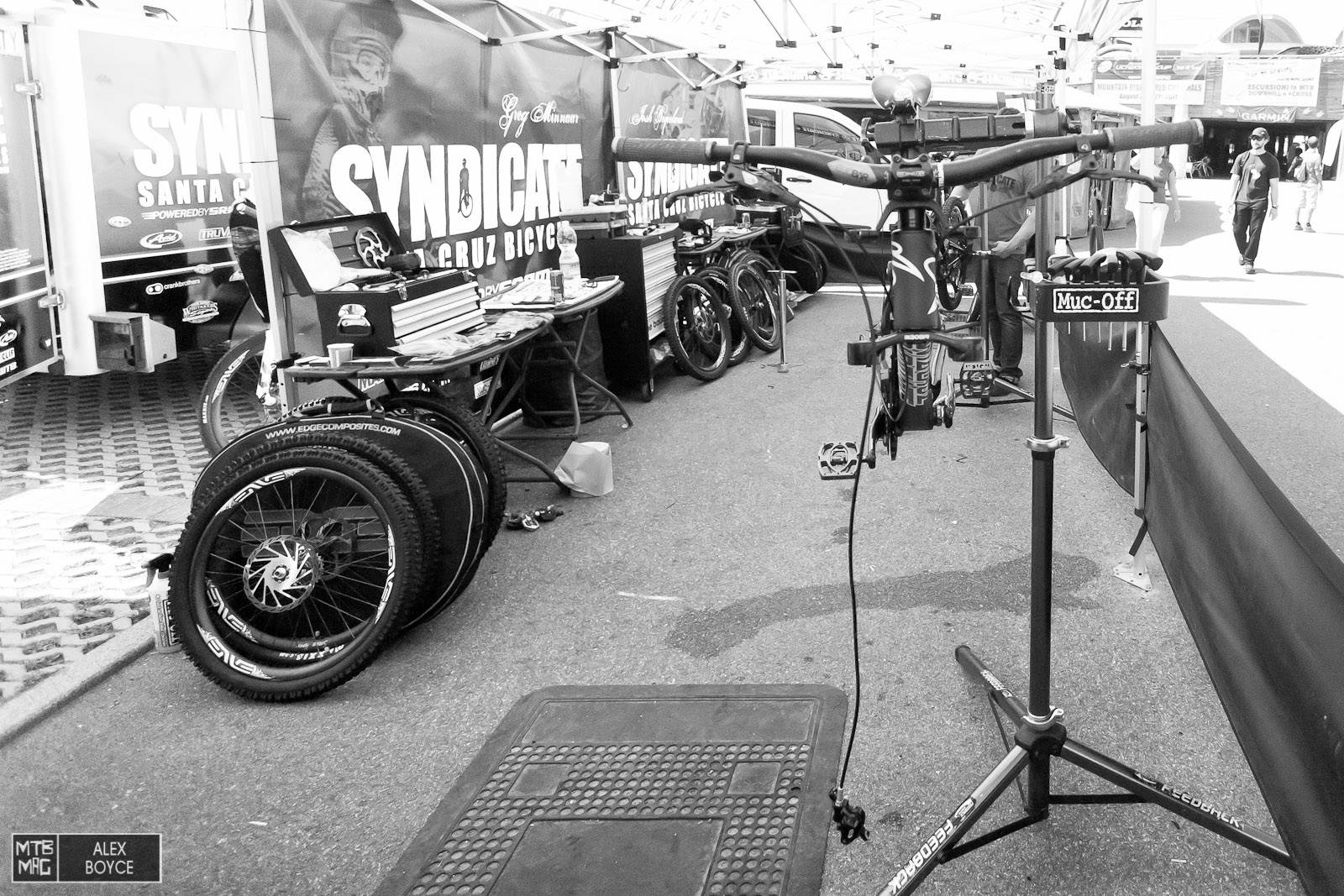 The first time we came into contact with the Syndicate was way back in 2011 at Vale di Sole. We were from the world of motocross and were more interested in their kit as we were shooting for one of their sponsors at the time. It turned out that the first shot we took of their bikes was around the time they used a complete carbon V10 for the first time. They were still on SRAM components, but the real innovations in carbon technology were taking place. 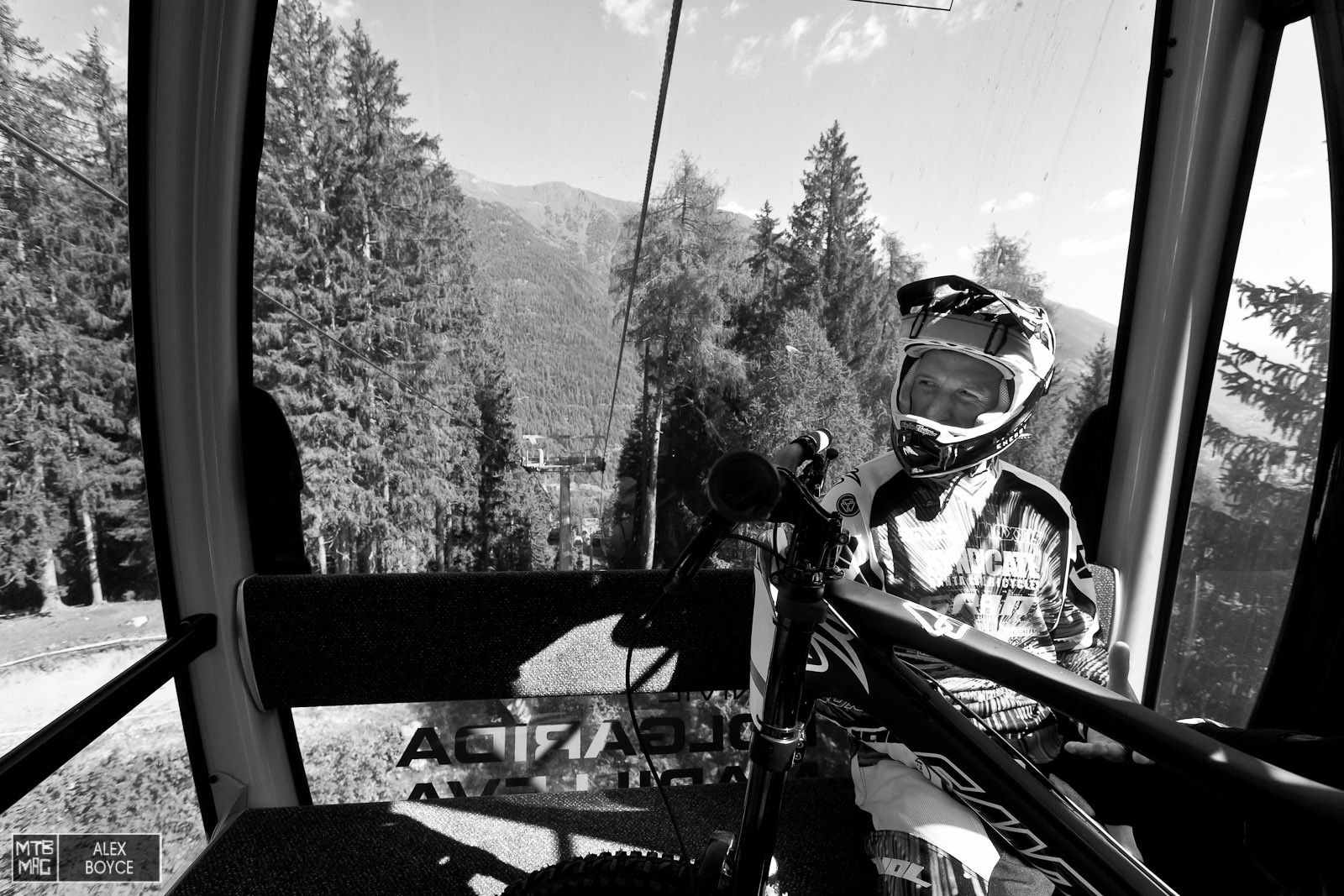 We managed to grab a ride with Steve Peat up in the lift, despite the crazy antics the Syndicate portray, this was a moment of reflection and concentration as Peaty focused on the task ahead, which was the very tough Vale di Sole DH track. 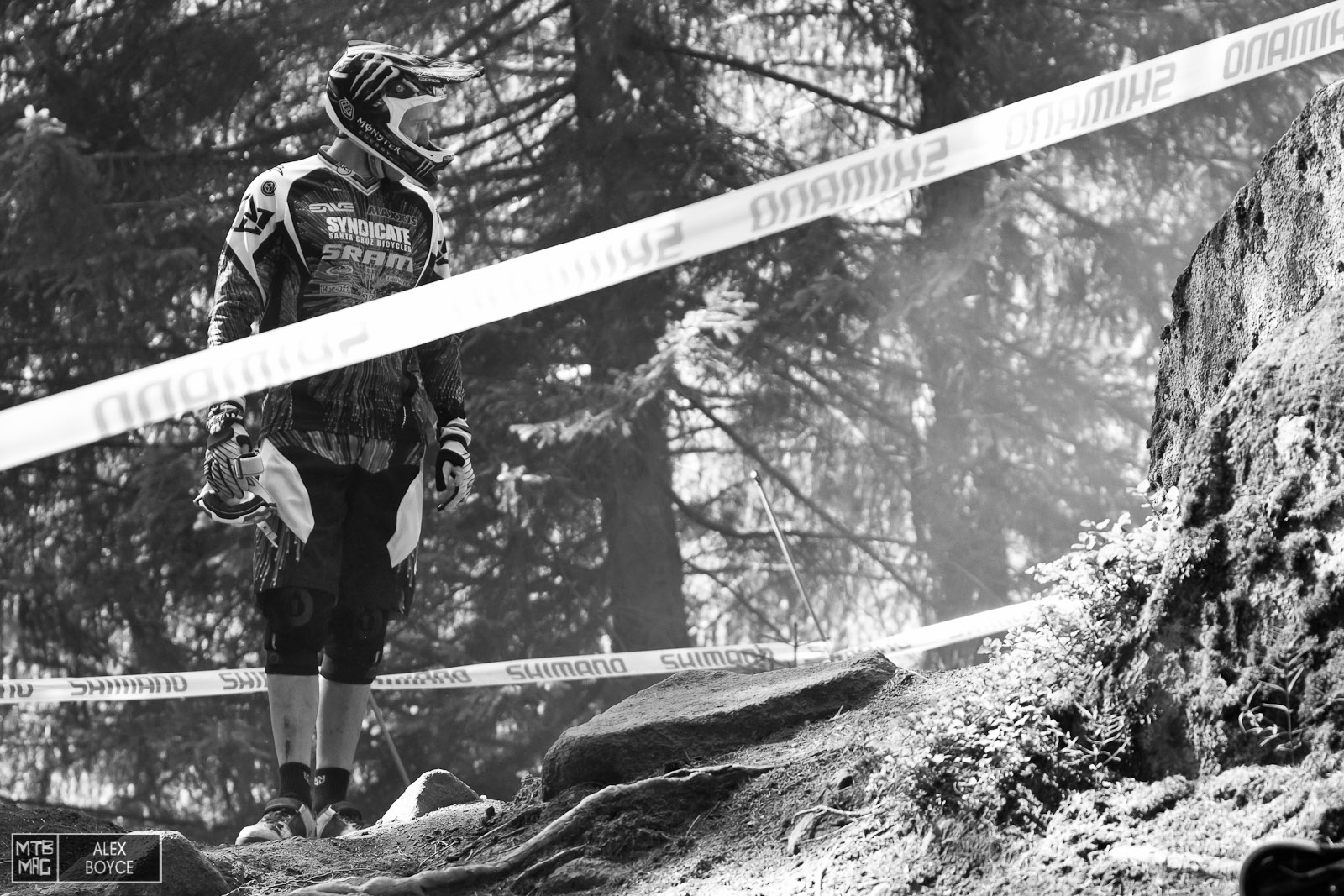 It was all about lines…We learned for the first time what racing was really about directly from the master as we walked and rode the track. Each rock and root was looked at, contemplated and either accepted or rejected. 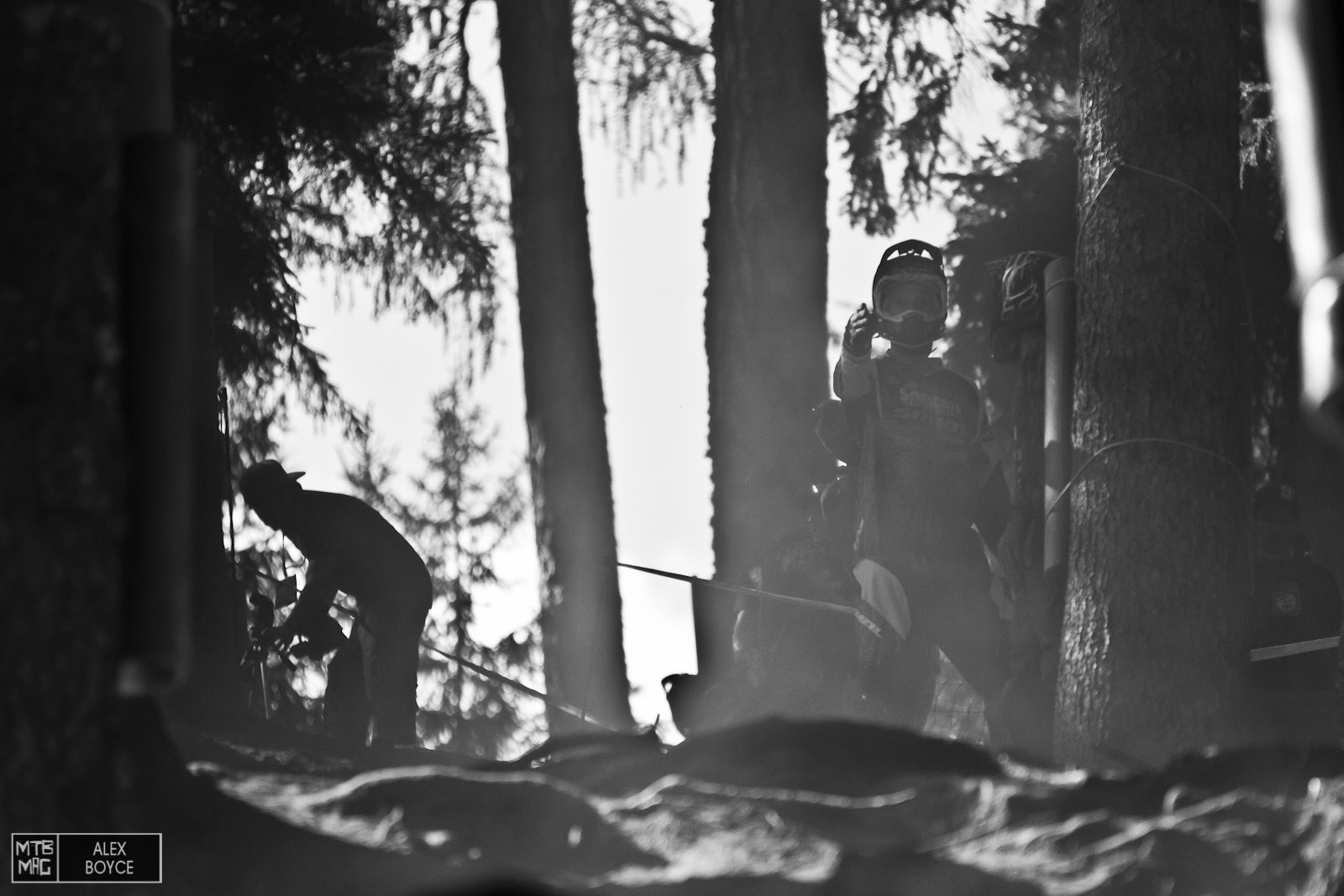 The atmosphere at Vale di Sole whether racing or practicing was always over-whelming. Some sections almost looked like life or death at the time – here Peaty studies the top section trying to find the best way down. 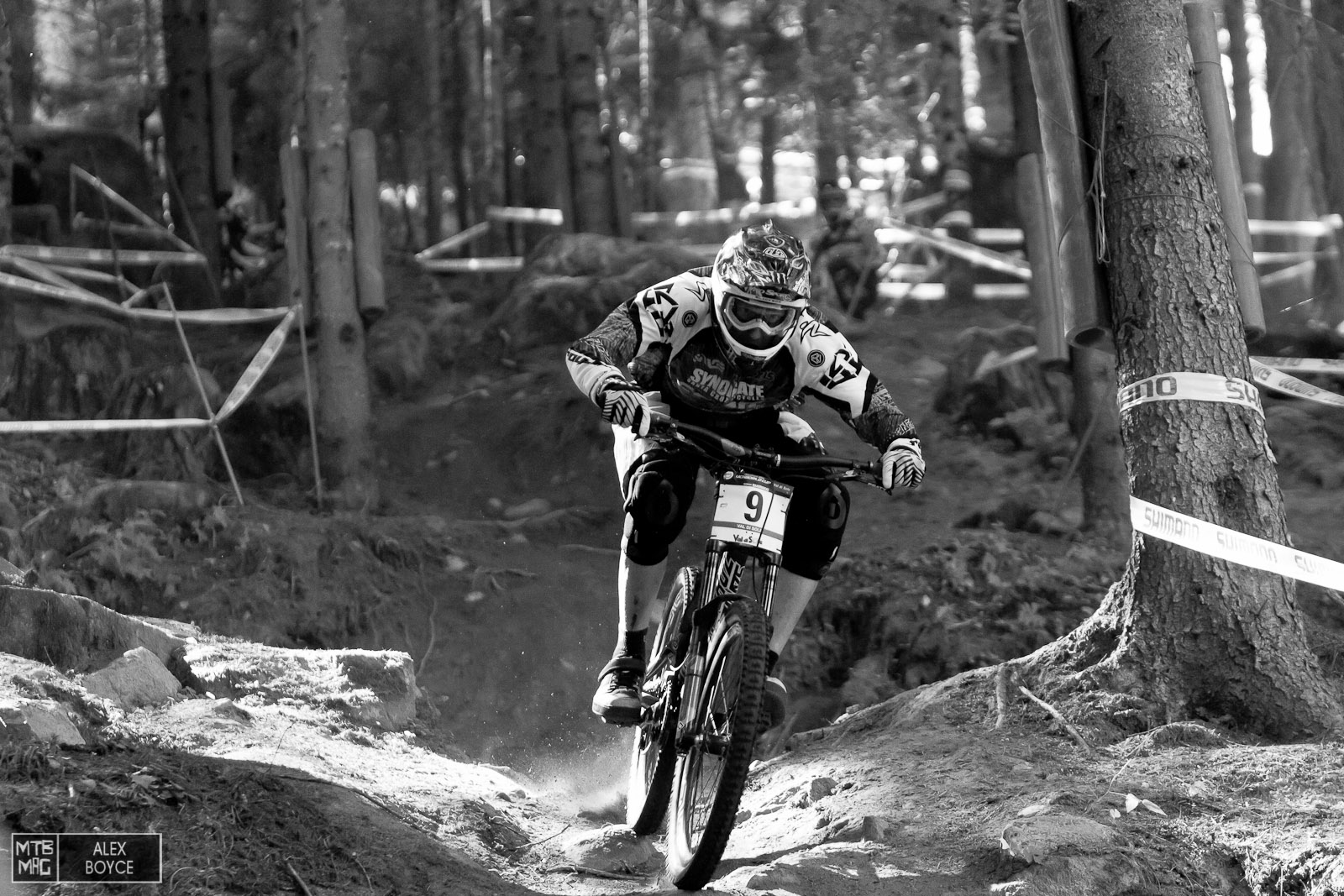 Qualifying with Steve Peat, making a rough section look like a smooth track, riders look tired even after just a short first section of the track. 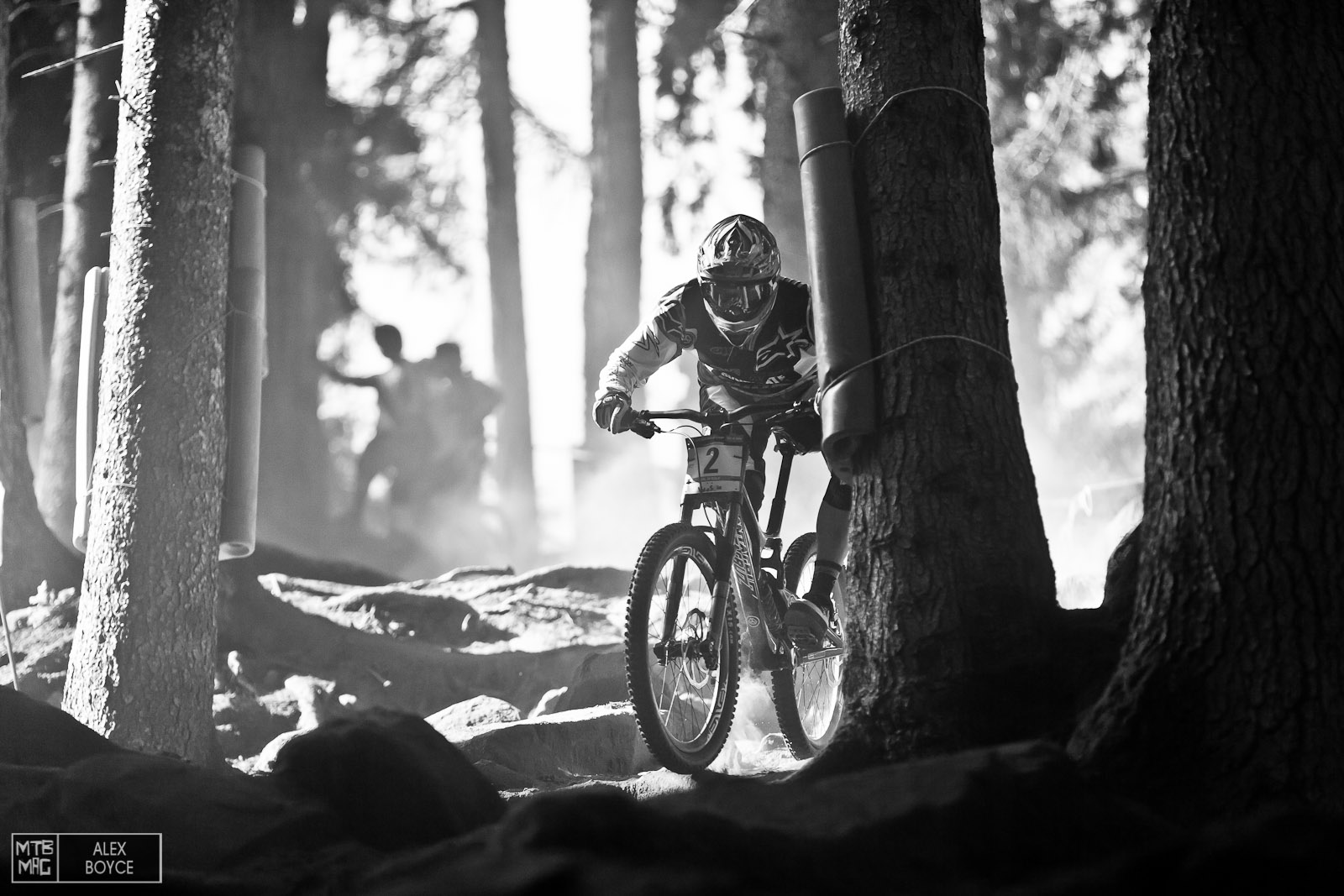 Greg Minnaar was picking his lines just as carefully. We watched the less experienced racers trying to get around this tree, with many riders bouncing off the tree, Greg picks his way around smoothly in qualifying. 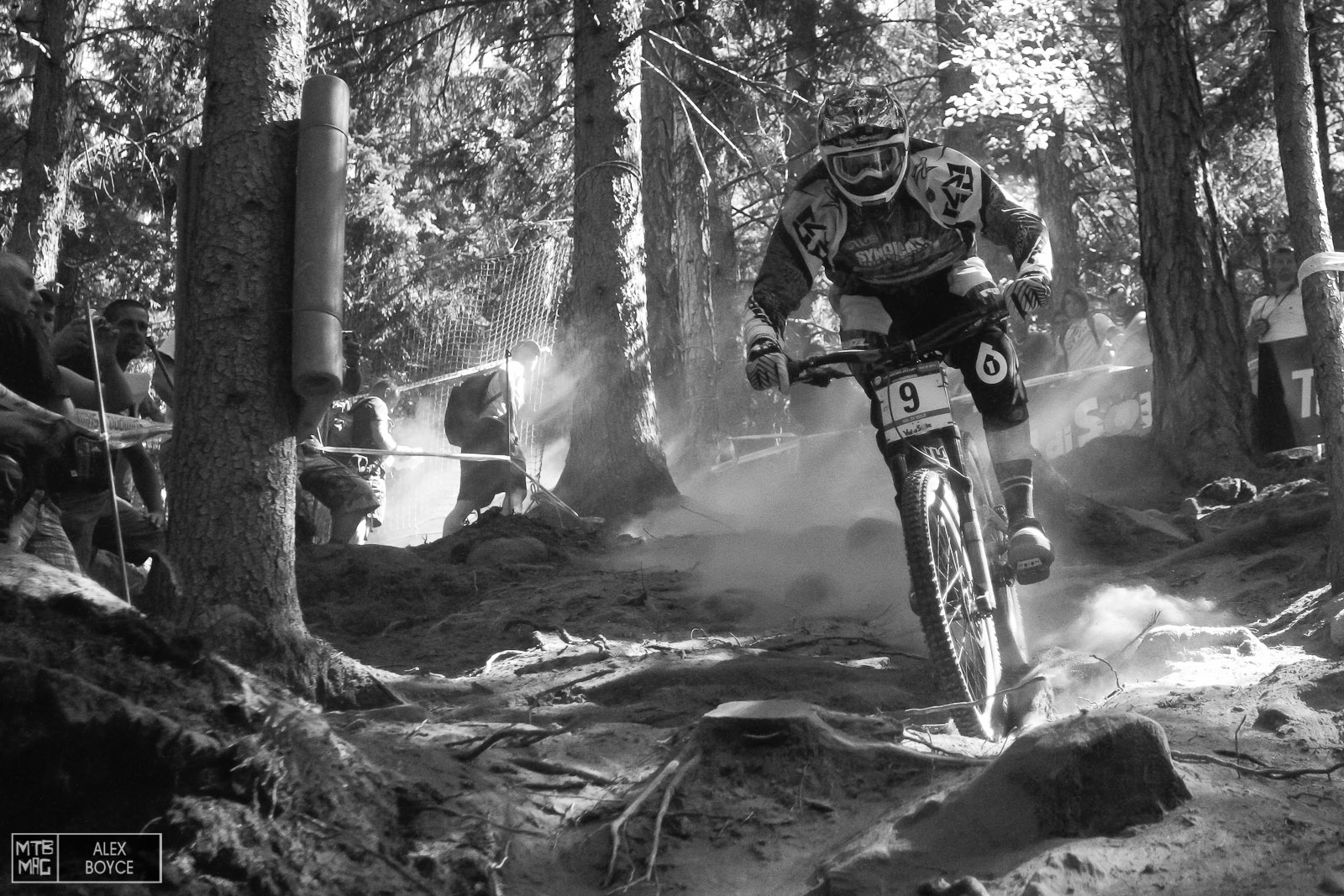 Dust, nearly vertical and race speeds. The extreme contrast from the patchy light in the woods is a nightmare for the racers, unfortunately this was not Peaty’s race that day, the result was not what he had hoped for. 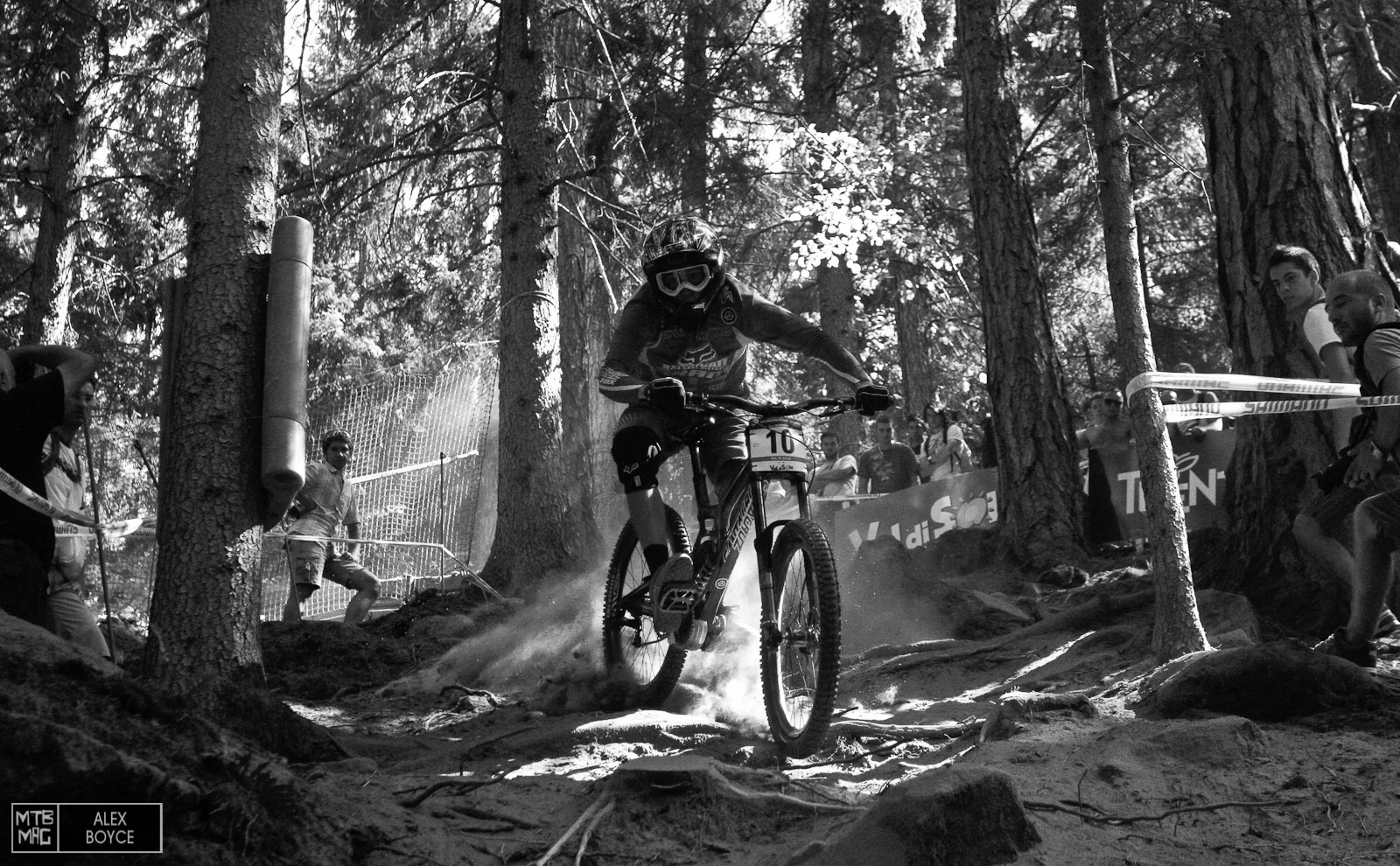 Ratboy still had short hair and was beginning to establish himself in the senior ranks coming off of his Junior title. His riding skills were phenomenal : speed, style and control, the bike was doing what he wanted it to do, notice he is riding flats on the roughest track in the world. He now clips in. 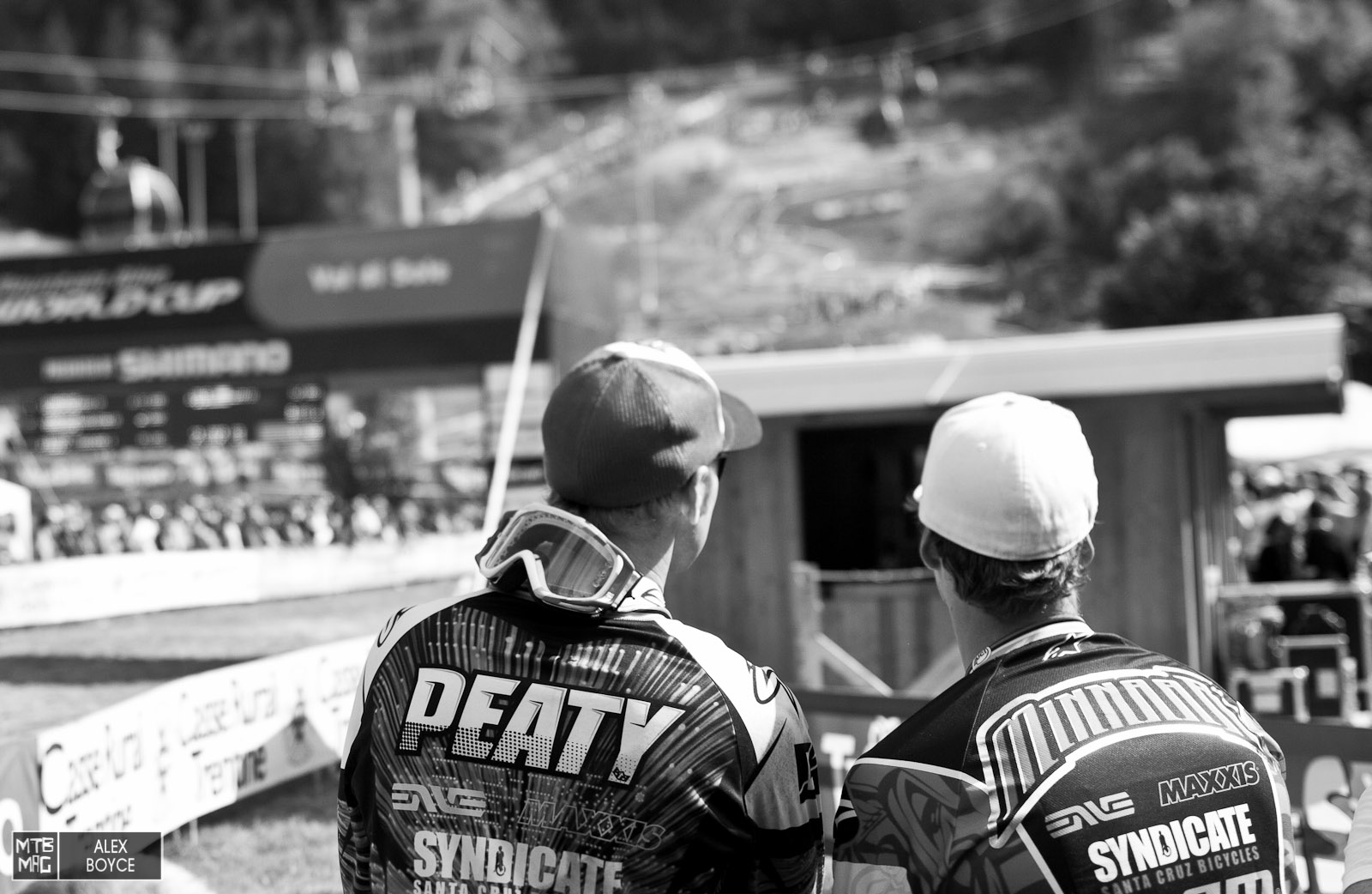 No matter how much experience and regardless of your position, the nerves as riders wait for the results of other riders were always present. 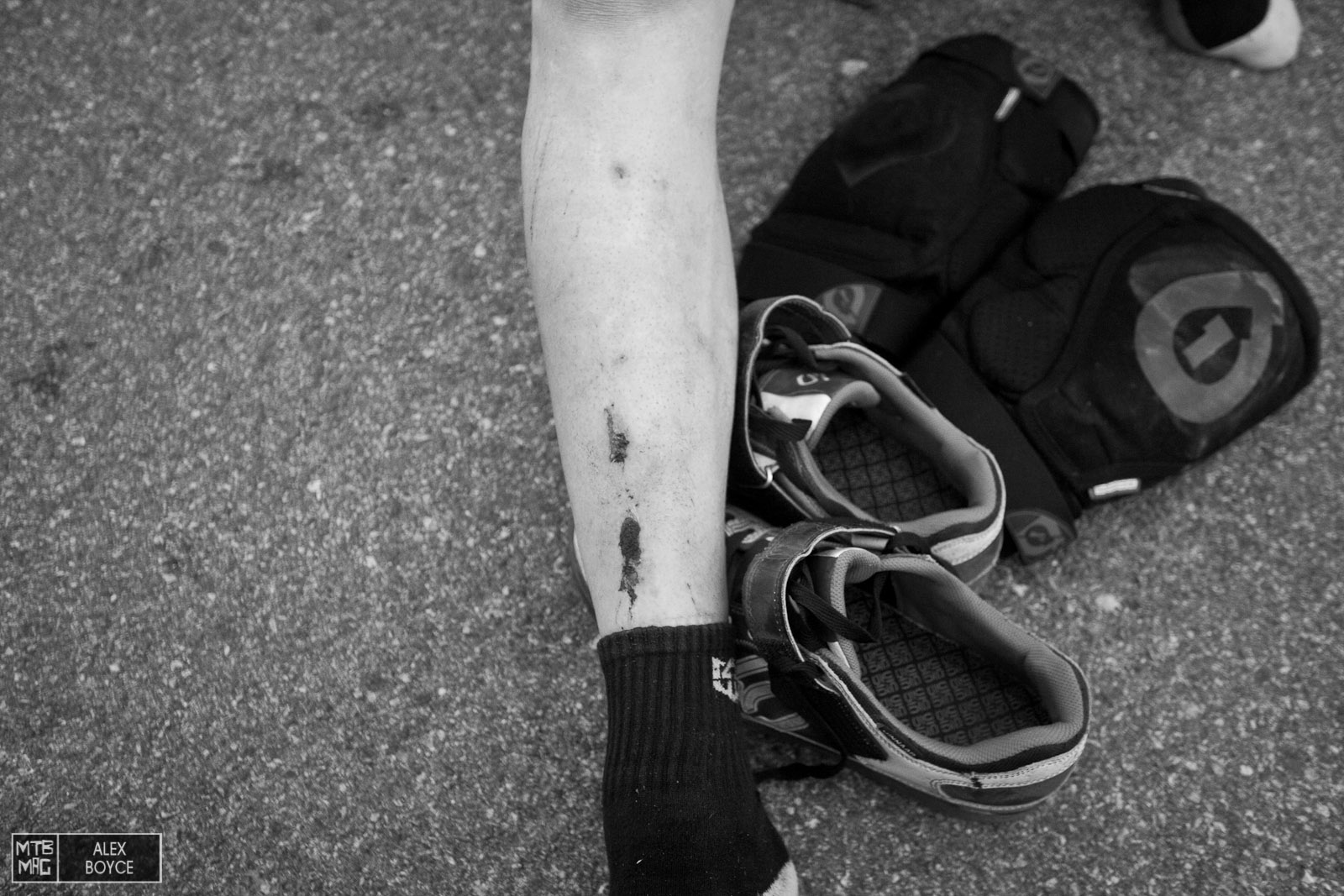 Steve Peat’s leg, more scars and cuts than one can imagine. It shocked us at the time, but it’s a small cost of racing and going that fast. 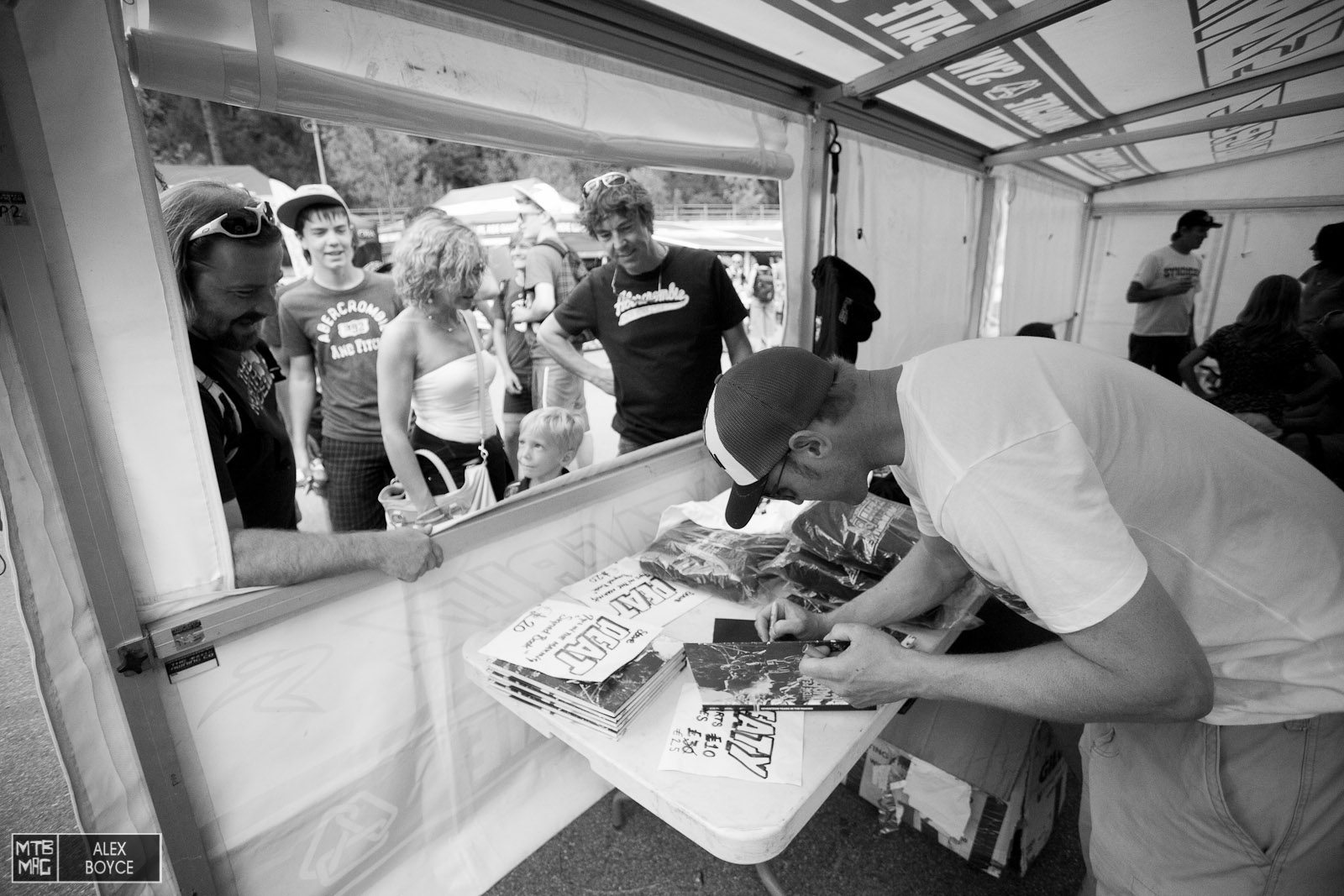 This is what made us really notice how mountain biking was for fans and athletes. Steve Peat was signing copies of his commemorative world championship book and taking time to chat with the fans. 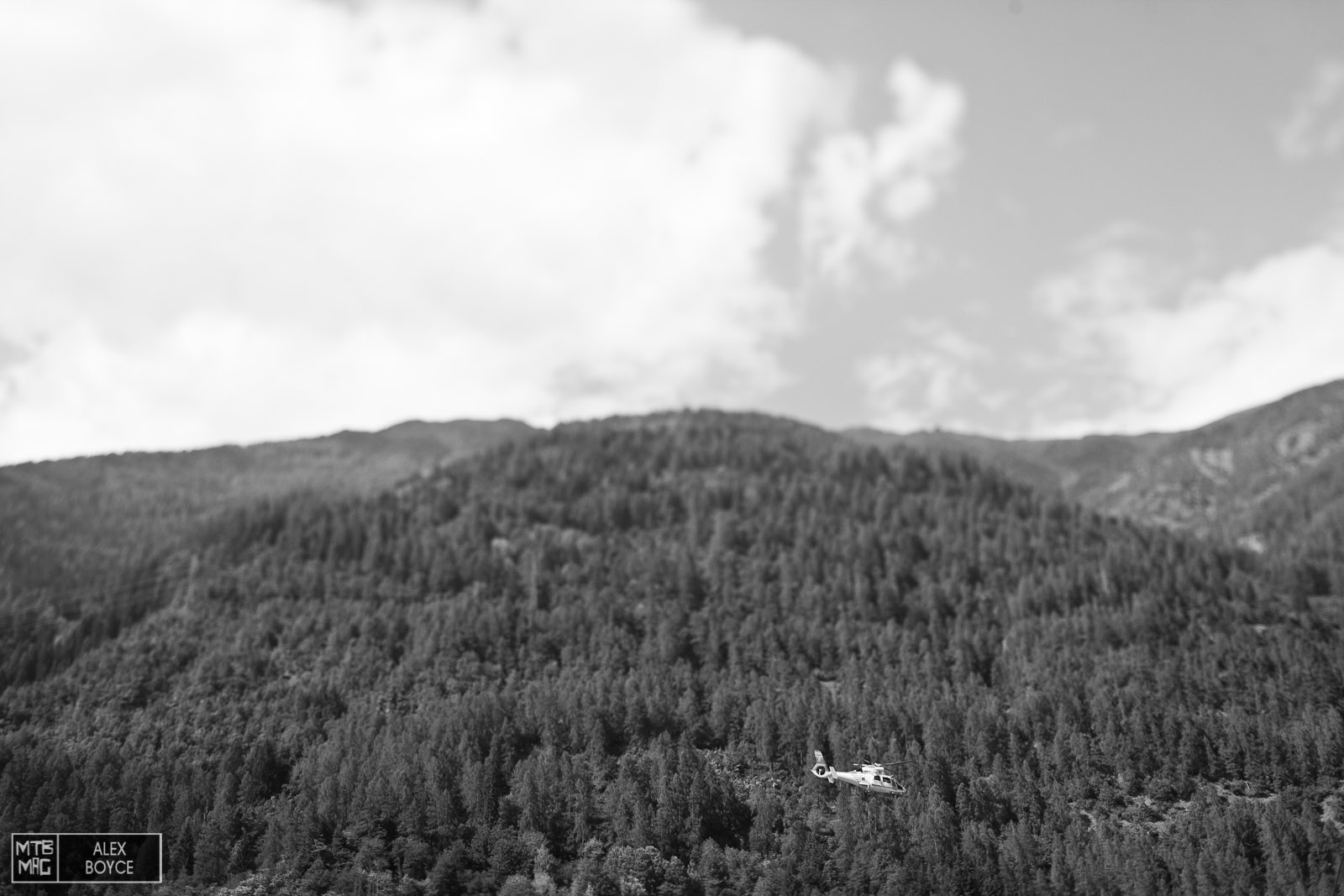 We skip ahead to the following season, still at Val di Sole. This unfortunate photo was the moment Cedric Gracia was taken away by helicopter after his life threatening injuries, although not an official team member, the crash was a blow felt by all. 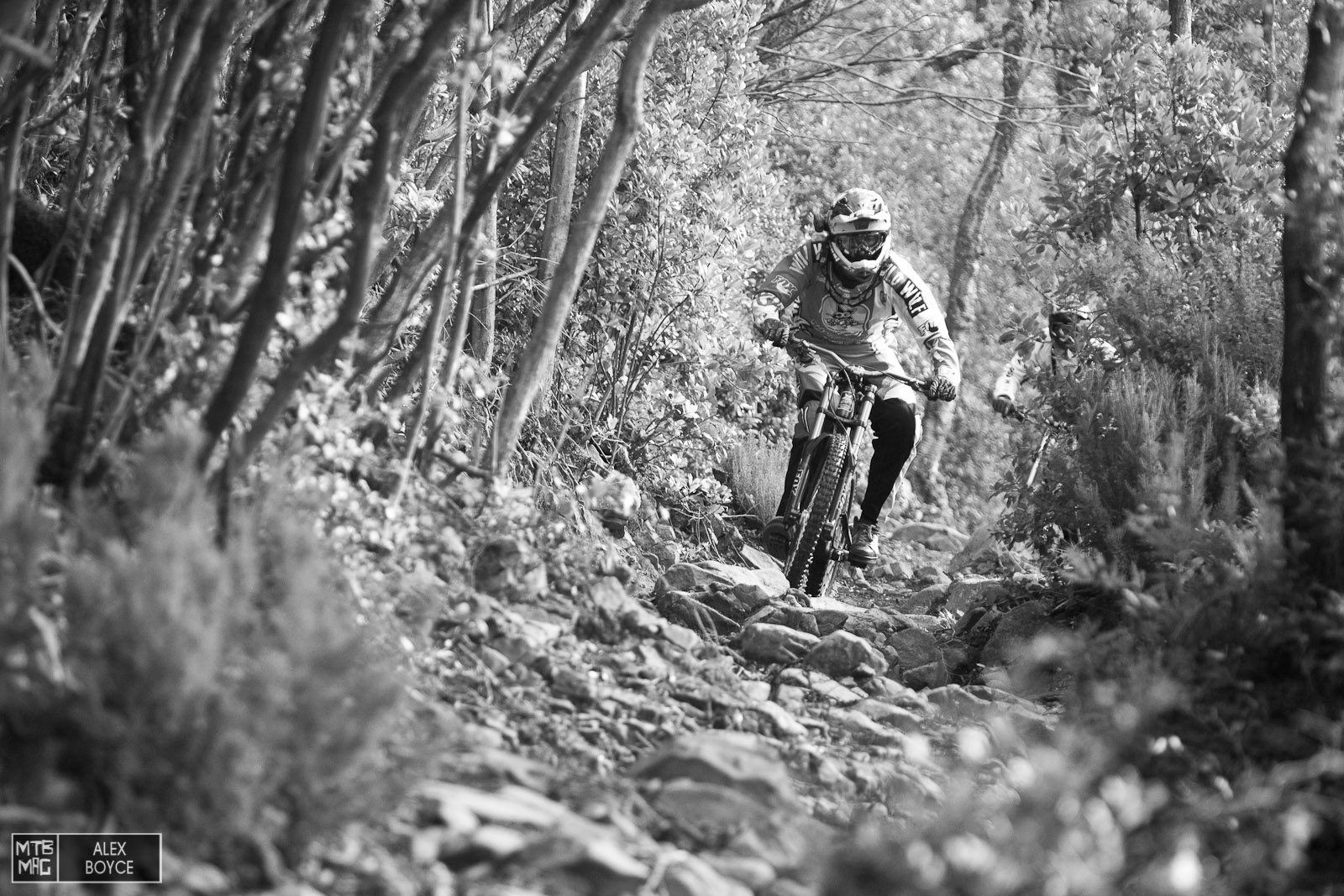 Then came the the official launch of the full carbon V10,  we captured Cedric Gracia on his DH bike for the very first time since his crash as he joined the Santa Cruz Syndicate for their first outings on the new frames. 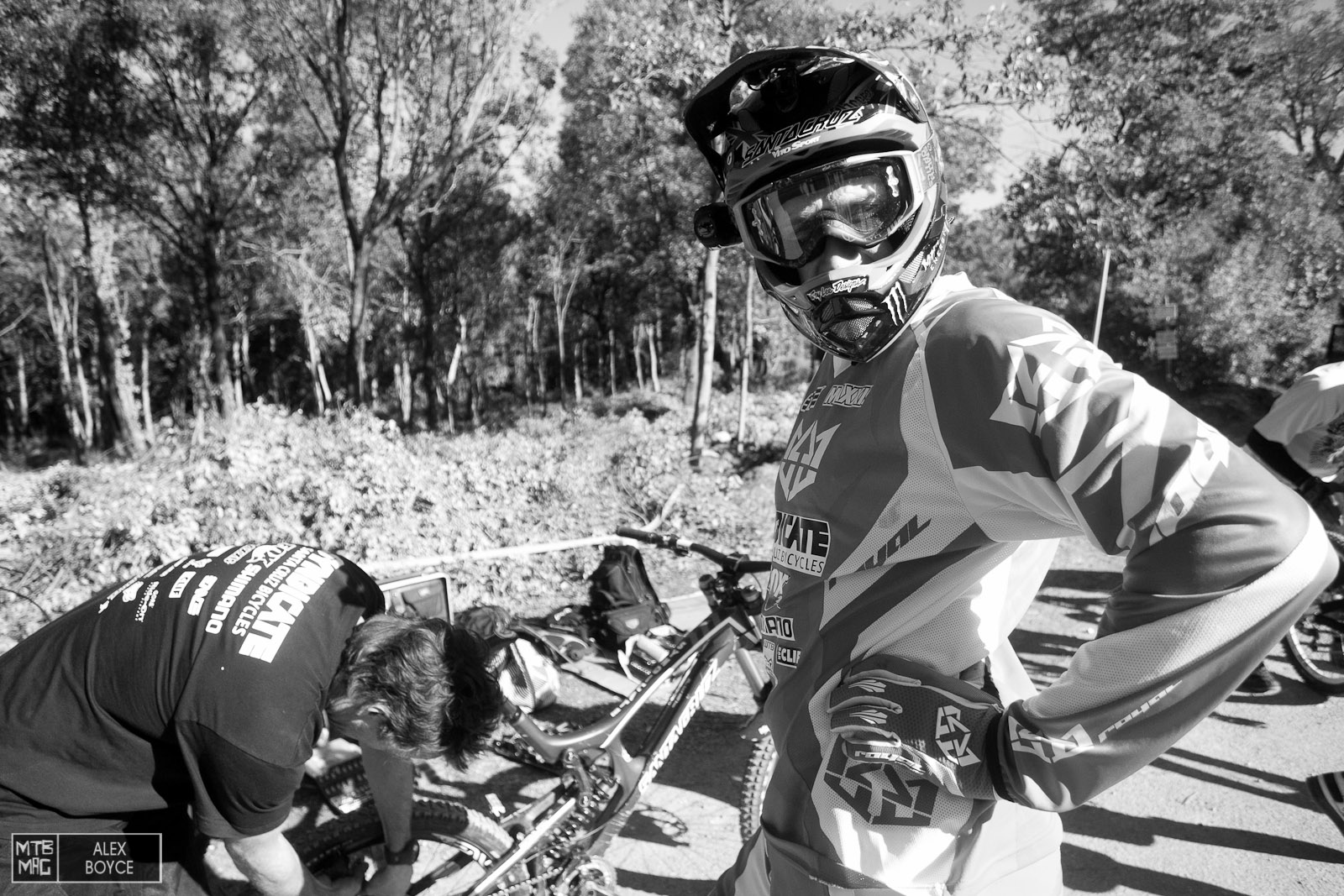 Even if it is just practice in the off season, Peaty takes every moment as an opportunity to tune his bike. 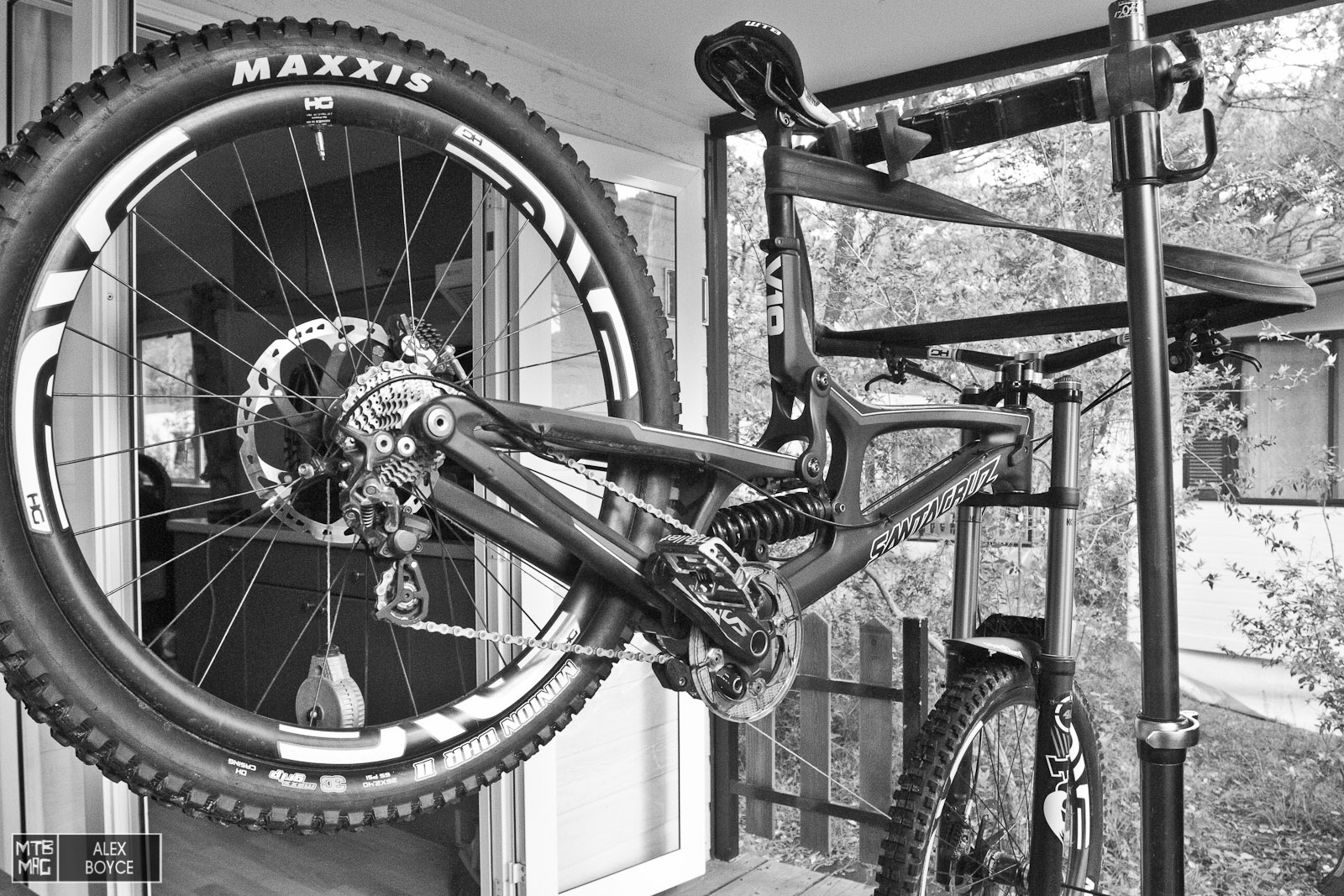 Although a seemingly un-interesting shot, this was the moment Greg Minnaar’s mechanic was measuring up his set-up on his 26″ bike and recording all the numbers so that the same settings could be passed onto the forthcoming 27.5″ bikes they were obviously working on secretly. 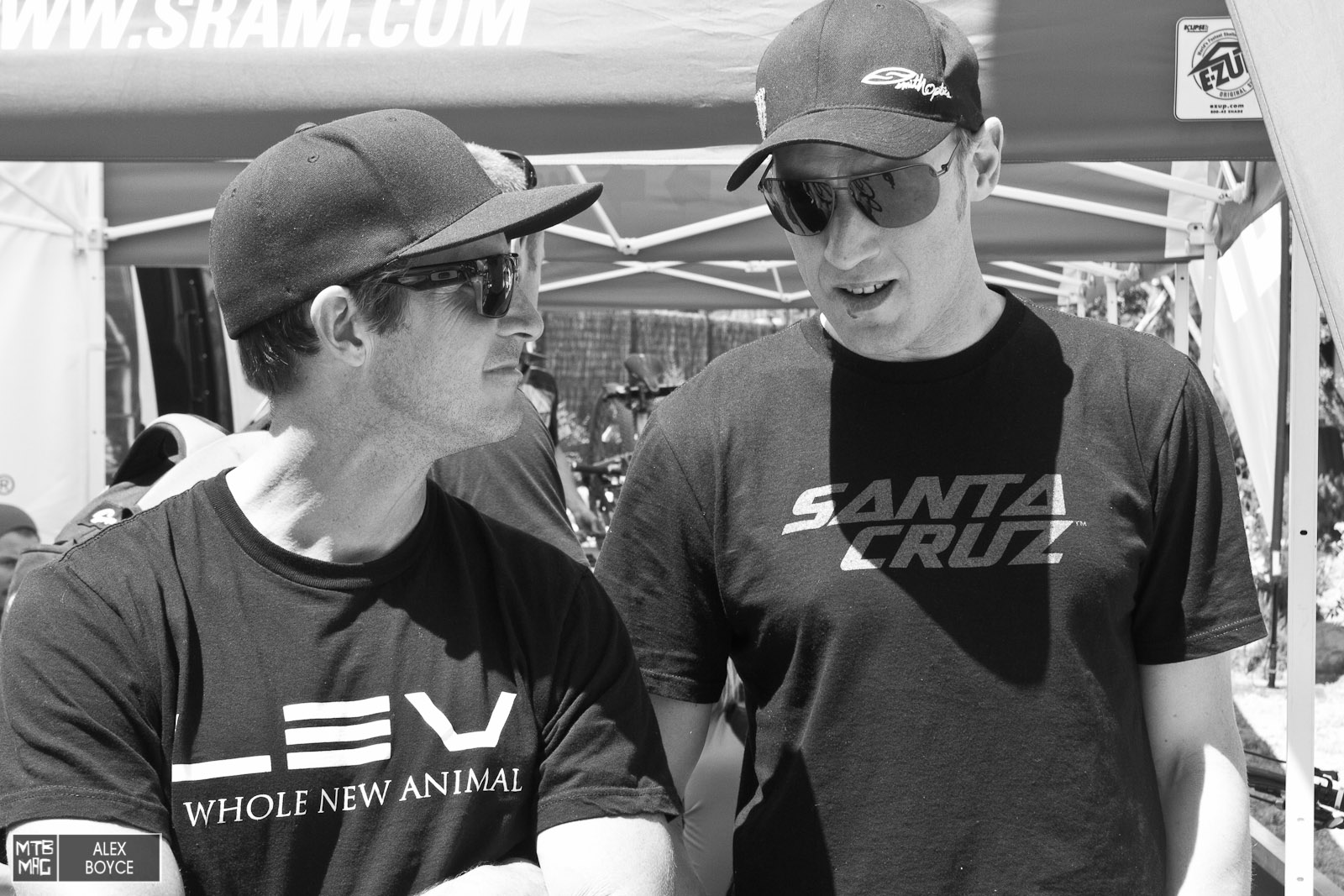 The first ever race and round of the Enduro World Series in Punta ala, Italy, was a MTB fans dream. Just about every rider came along to find out what Enduro racing was. Here Peaty and Brian Lopes catch up and discuss Enduro. 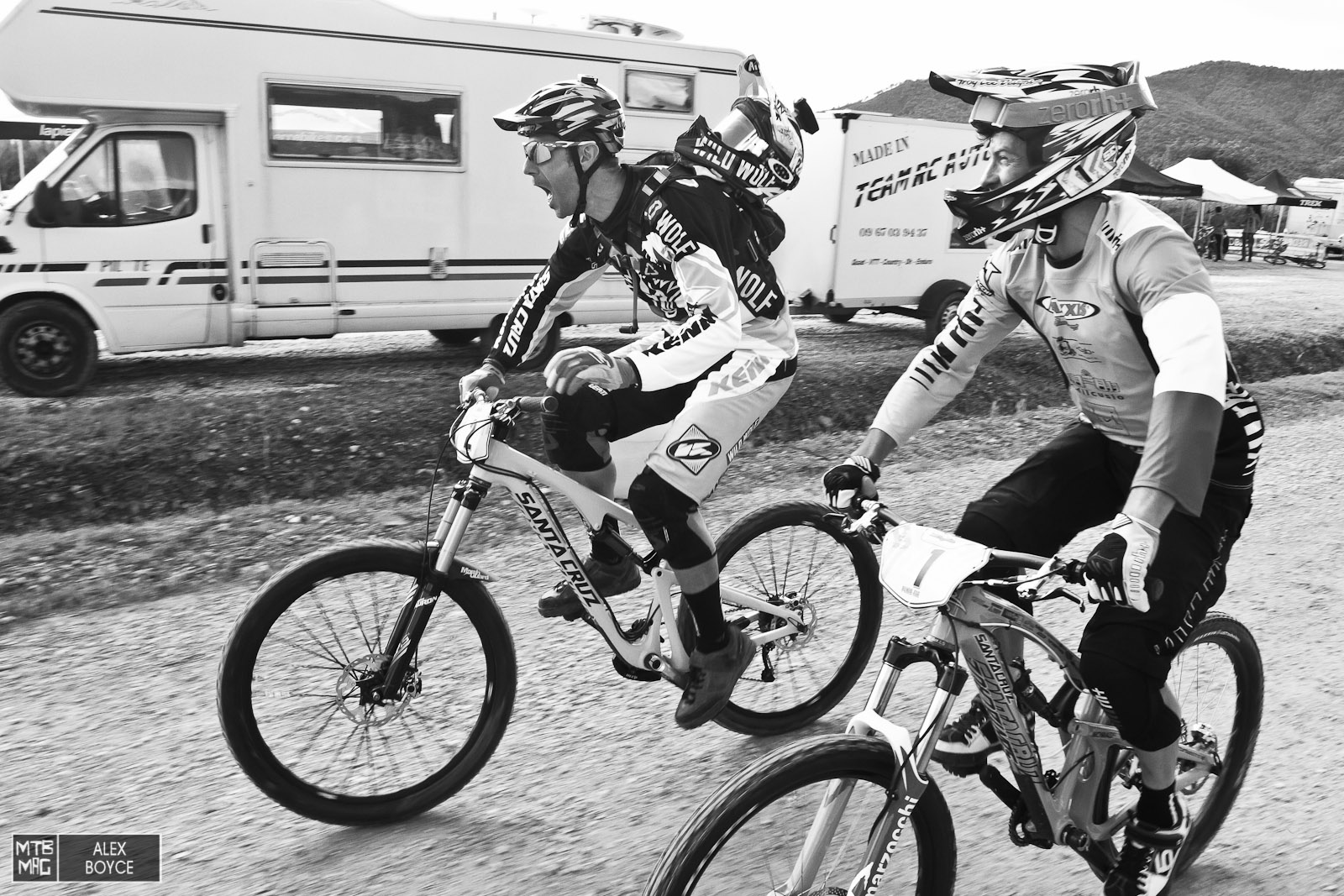 The very first pair of Enduro World Series riders leave for the very first stage of the EWS, Italian national Santa Cruz riders Davide Sottocornola and Cedric, set off. It must have been an interesting ride up for Davide. 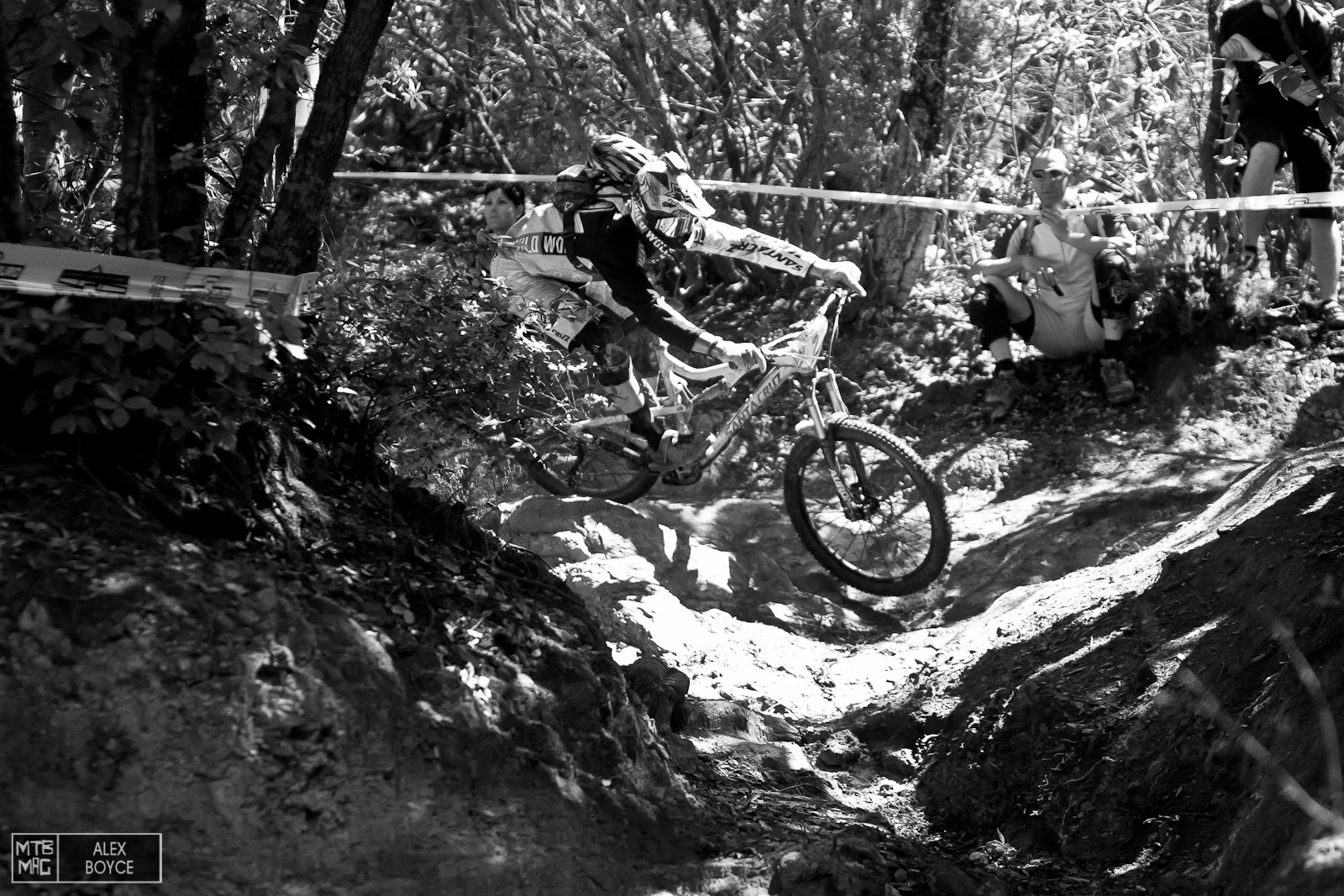 Enduro, Rock-Oh trail and Santa Cruz rider Cedric Gracia, second rider down. A tough start to a new series. It’s worth noting that historically Santa Cruz by default seem to be present wherever there is innovation taking place. 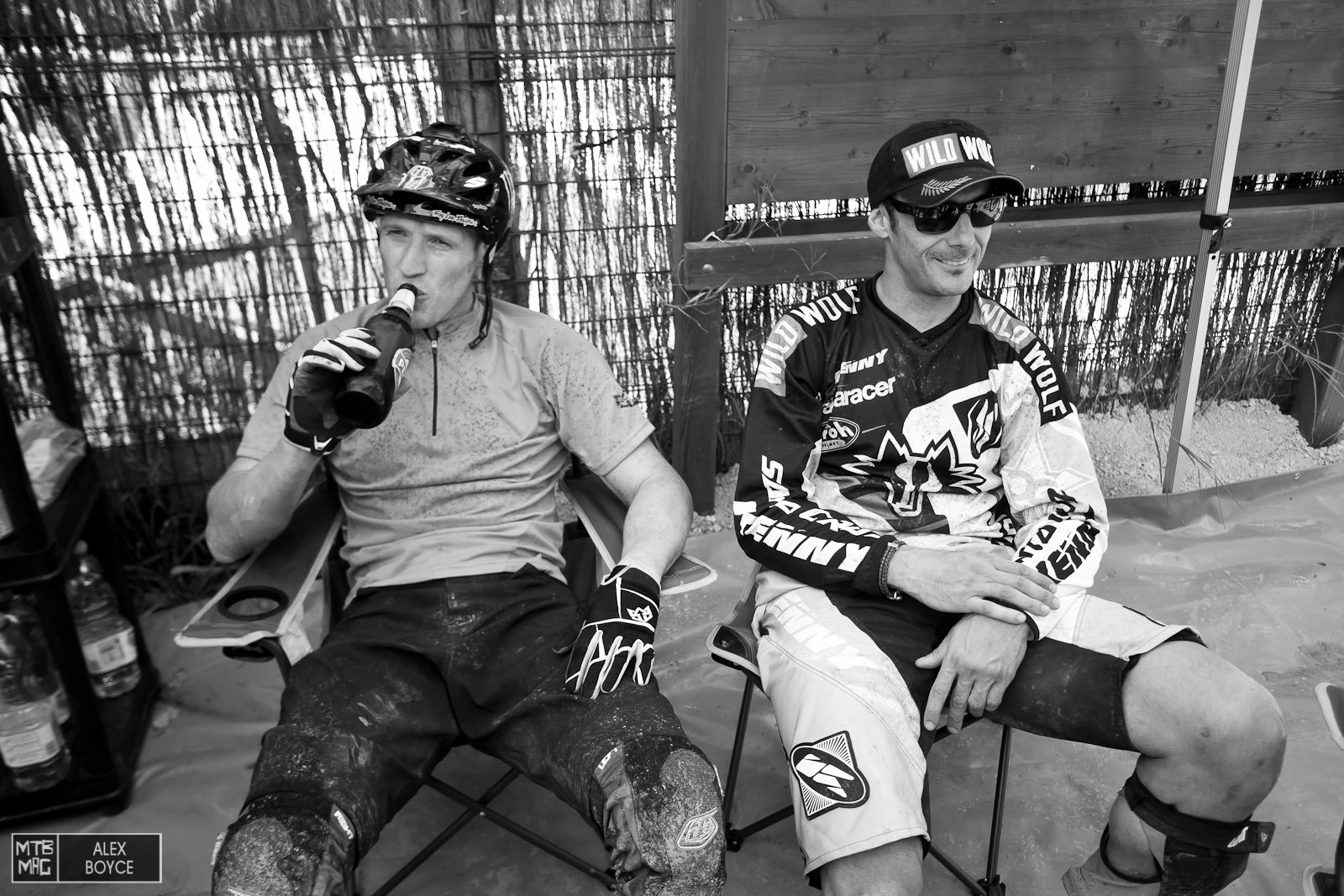 In true Santa Cruz style, end of race beer, relaxing and thoughts about what Enduro really was about. Cedric was lucky/a true athlete, as he completed one of his first major races since his injury and managed to keep it together, despite breaking his chain and having to run on one of the transfers against doctors orders. Peaty, Greg and Josh rode their first Enduro race blind but still managed high finishing positions. Peaty even suffered a random puncture as he was just leaving the start of the race, nothing it seems ever slows these guys down.