It has no doubt been a riveting year for those who follow the UCI World Cup Downhill series.  While the sport always carries a certain level of intensity some years are more dramatic than others.  At just over halfway through the season it has certainly been a nail biter.  We’ve already seen first time wins from two talented and well deserving athletes who, despite their young age – are already on the verge of being considered legends.  The points race is tight – the young guns are getting faster and even the vets  have elevated their game.   Sam Hill and Greg Minnaar have also been back in their top form.  Once again, they’ve shown not only their consistency, but also how resilient they can be despite rehabilitating nasty injuries in the off season.   Speaking of injuries – Steve Smith has come back strong, and while still not at 100% pace, he’s shown that by the years end he will once again be a threat.  Steve Peat turned 40 and Greg Minnaar raced his 100th World Cup.  What a year it’s been so far!  Let’s take a closer look at some defining moments.

1) – Josh Bryceland finally did it.  We all knew he could.  After years of podiums and gut wrenching near misses Ratboy finally took the top step at Leogang, Austria.  It’s been a long time coming, and we’re certain that he made his mentor Steve Peat quite proud. 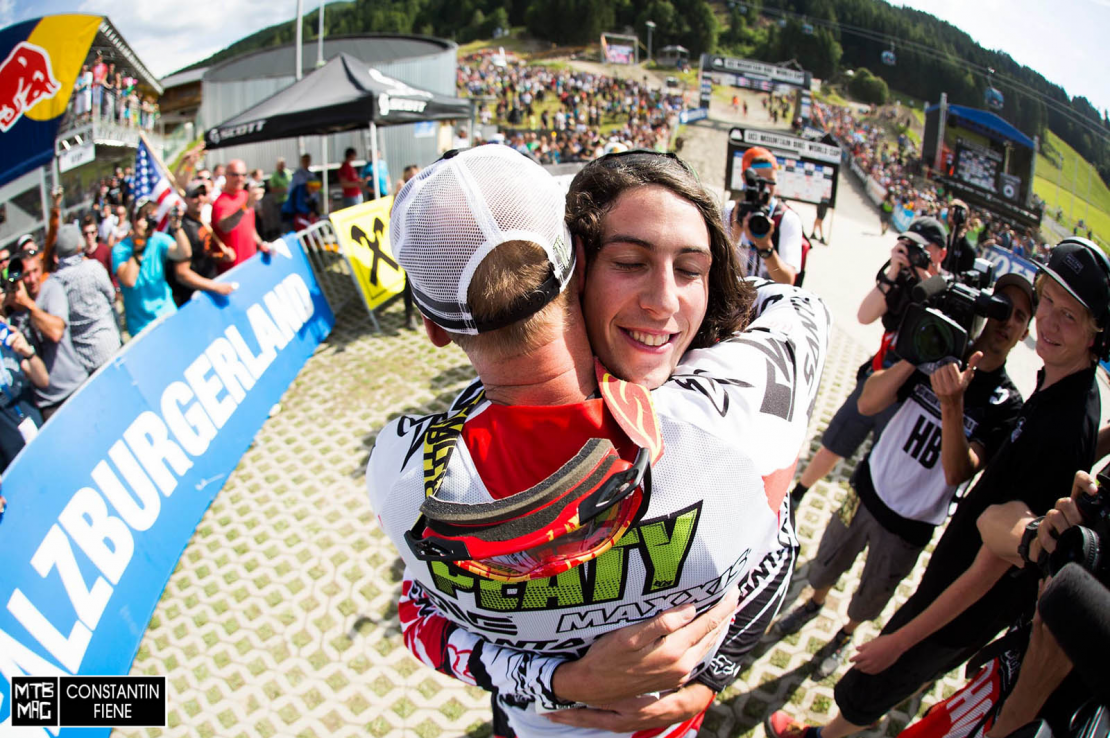 2) – Aaron Gwin has found his pace again.  After a disappointing 2013 year with what seemed like very little explanation for his inconsistent performance, Gwin returned strong at the opening round of 2014 with guns blazing.  Aboard a 27.5″ wheeled Specialized Enduro he took the top step in Pietermaritzburg, South Africa and silenced the skeptics early on.  His split times would prove that his pace is on par, but with bits of tough luck he hasn’t taken a repeat win…at least not yet anyway. 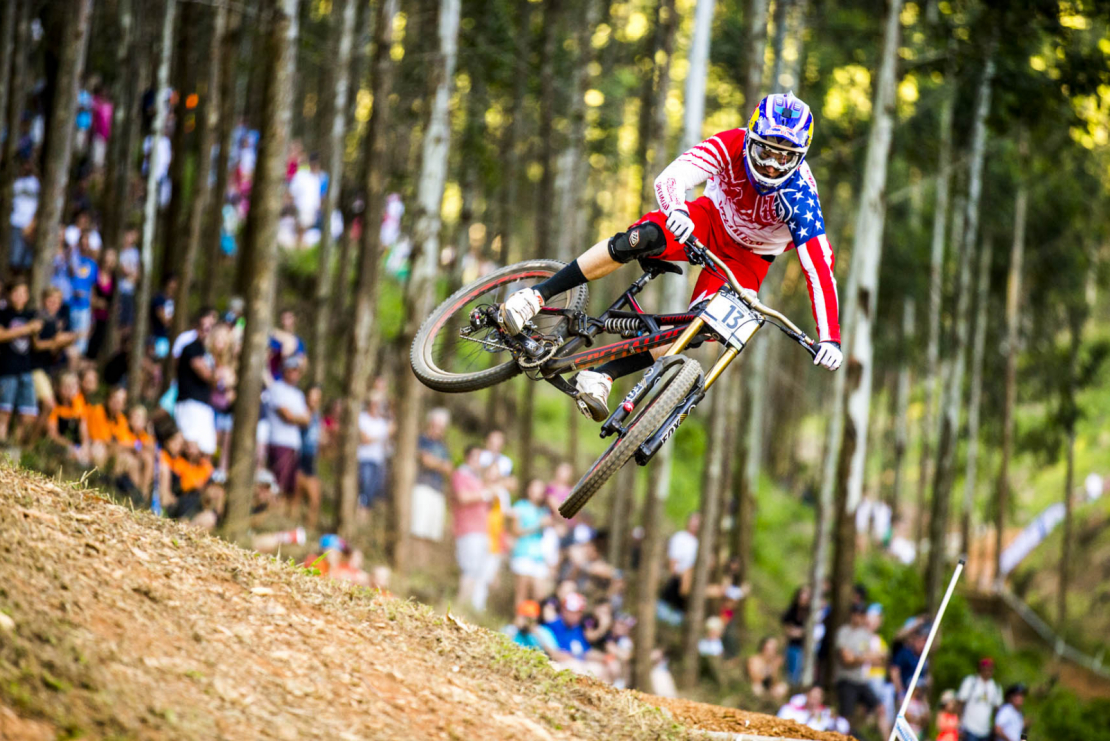 3) – Speaking of tough luck, the video of Gwin’s wild race run at Leogang with a flat tire nearly stole Bryceland’s thunder as it went completely viral.  The brilliance and skills exhibited in this wild performance are simply staggering. 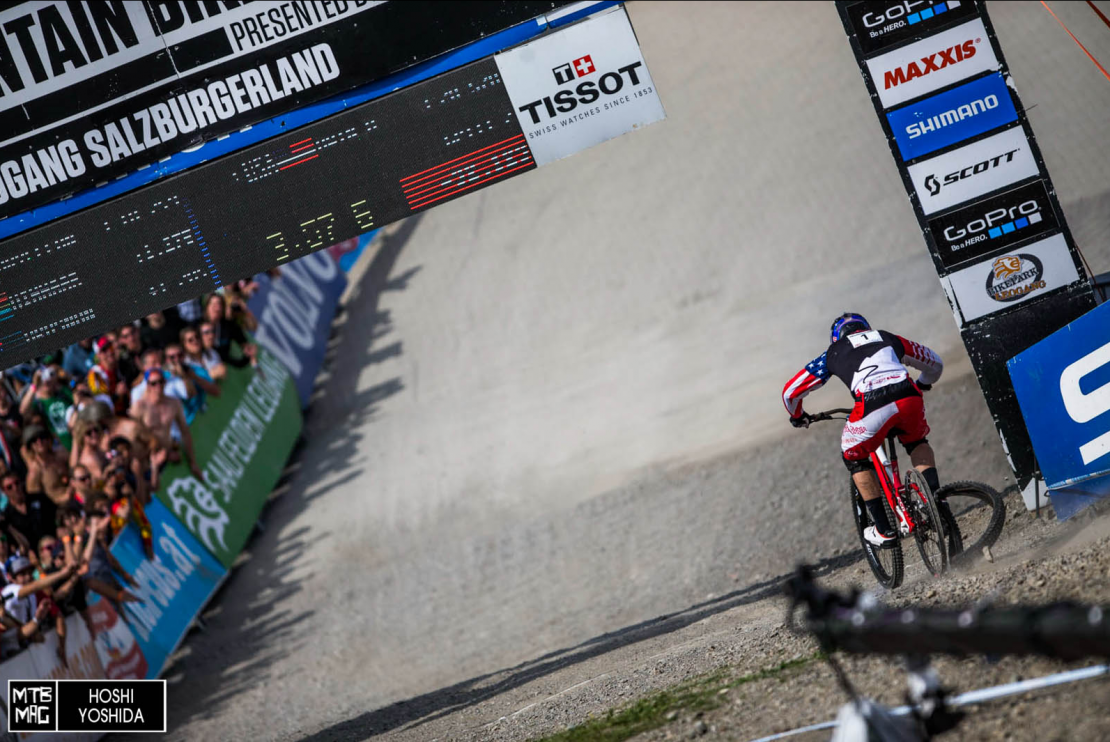 4) – For the first time in 18 years, the UCI World Cup returned to Cairns, Australia to find the track covered in peanut butter mud.  The brutal conditions left the athletes suffering through a complete boggy slog fest.  Gee Atherton dominated on the day that Australia reminded us that it isn’t all blue skies and daisies in downhill. 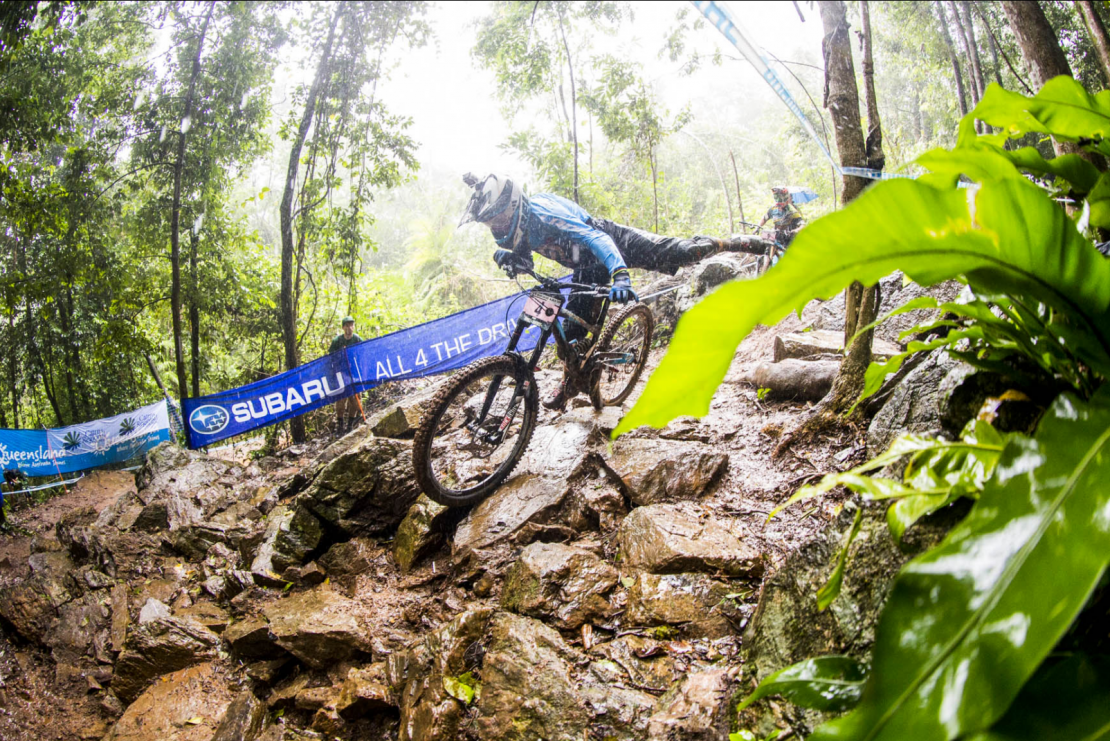 5) – 17 Year old Belgian Enduro sensation – Martin Maes took his first junior World Cup DH win at Fort William, Scotland.  What makes this unique is that Martin just began dabbling with riding and racing downhill bikes only recently.  This could prove to be quite the testament to the fitness levels and skillset developed from racing Enduro, but it also serves as some foreshadowing into the young gun’s brilliant looking career. 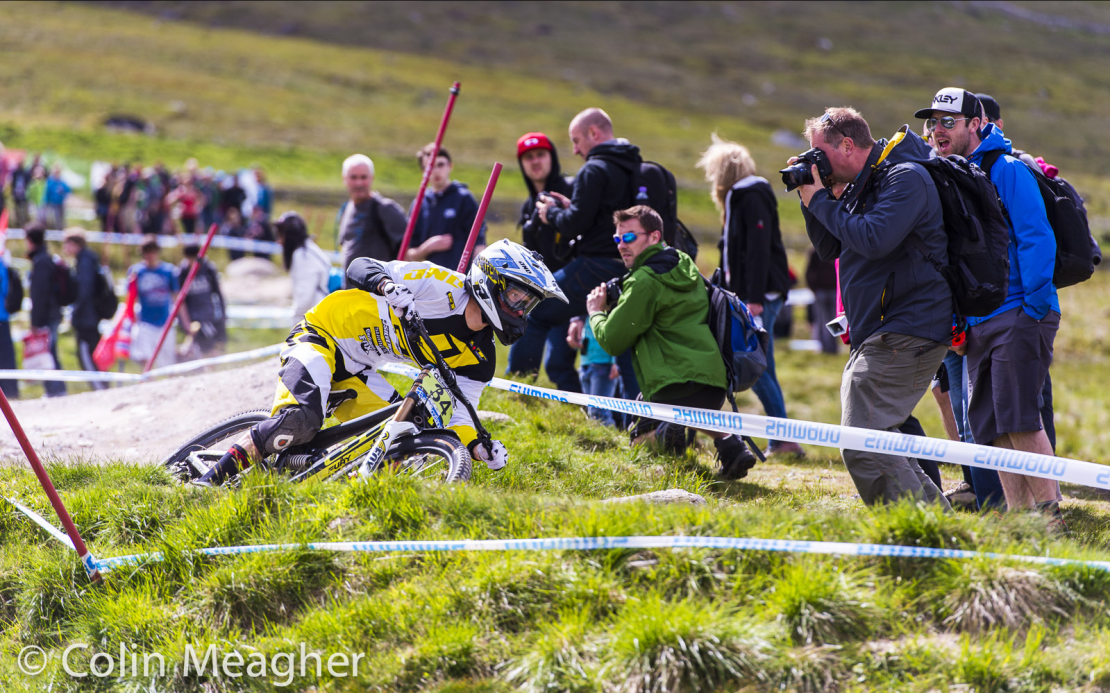 6) – Troy Brosnan becomes the first elite downhiller in history to take his first win at Fort William.  That’s right, no one has ever won their first elite DH race at the age old, iconic Scottish stage.  Troy made history and not only won decisively, but shattered the preconceived notion that big open tracks like Fort William only cater to the big, tall riders like Minnaar and Peaty.  In fact, the top 3 was rounded out by Sam Hill and Danny Hart – neither of which are statuesque by any means. 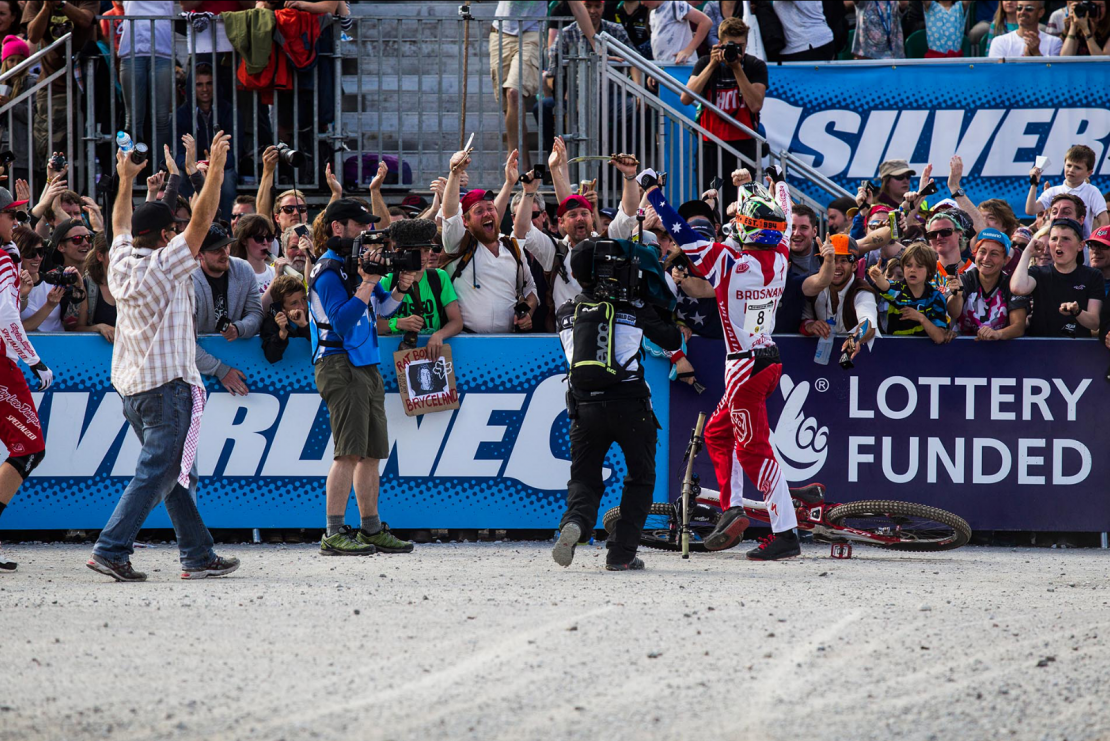 7) – At Leogang, Austria this year, Steve Peat turned 40 years old in the middle of his twenty first consecutive season racing downhill.  After finishing in 7th place earlier on at the treacherous round at Cairns, its evident there is still a fire inside “Sheffield Steel” and he is hungry for more.  This establishes Peaty’s career as being the longest and strongest in a sport that takes most athletes out of contention by the time they reach their mid 30’s.  With 17 World Cup victories to his name, Steve is still the winningest athlete on the circuit.  What a legend. 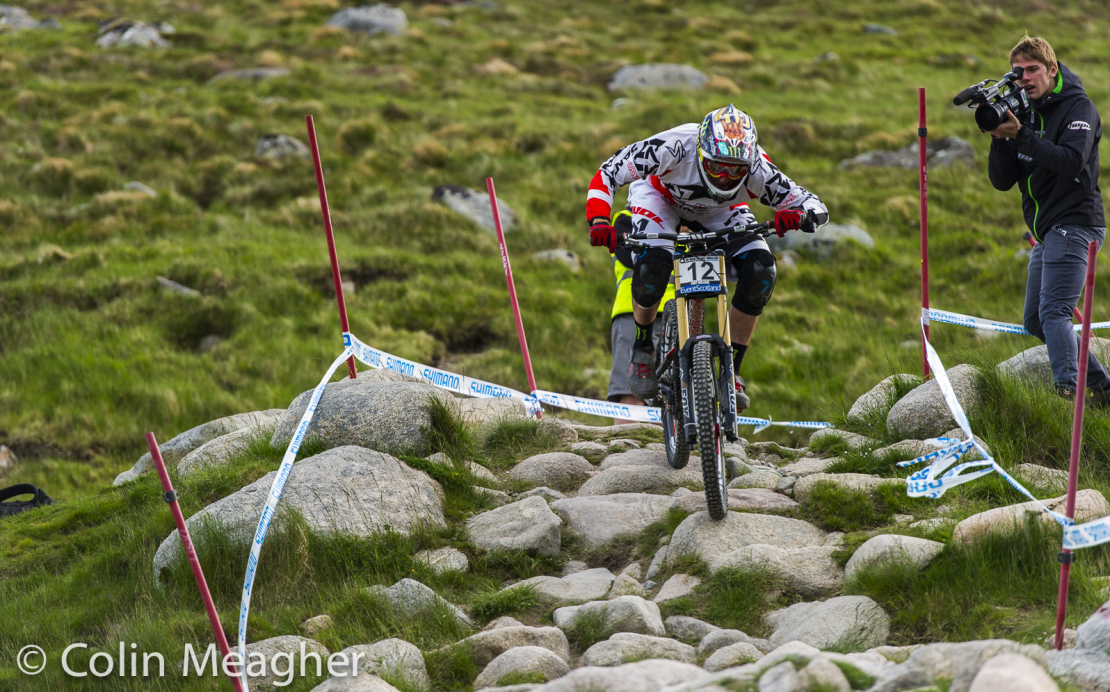 8) – Greg Minnaar raced his 100th World Cup round at Fort William this year.  Anyone betting against Minnaar is fool.  With unequivocal consistency the tall South African has stood on the podium at a record of 62 world cup downhill races while still at the relatively young age of 32.  Greg is still riding at an incredible pace with no signs of slowing down any time soon. 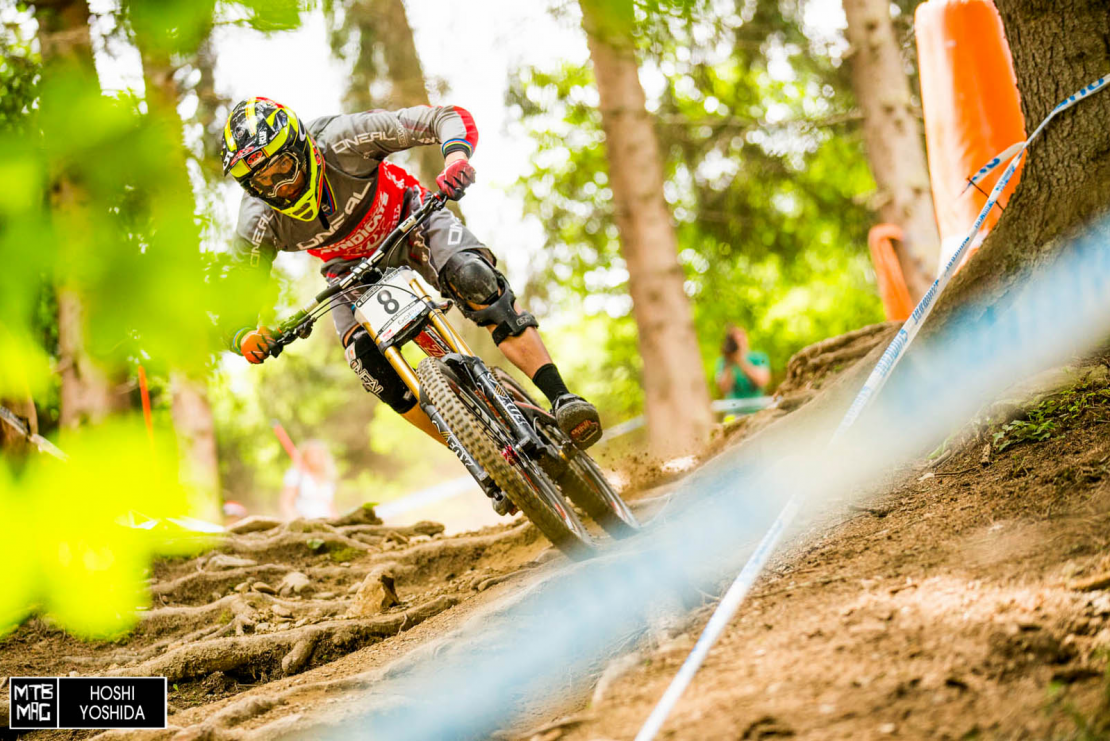 All photos by Hoshi Yoshida, Colin Meagher and Constantin Fiene.