Lourdes has been a super exciting race to open of the 2022 UCI DH World Cup circuit with intensity and lots of show. The French track, very technical and at the same time fast, has rewarded the most aggressive but at the same time more precise athletes since every little mistake and bobble paid dearly.

In this sense, Amaury Pierron was a master – he rode with exceptional determination and aggression that led him to the top step of the podium, starting the 2022 season at the top of the overall standings. 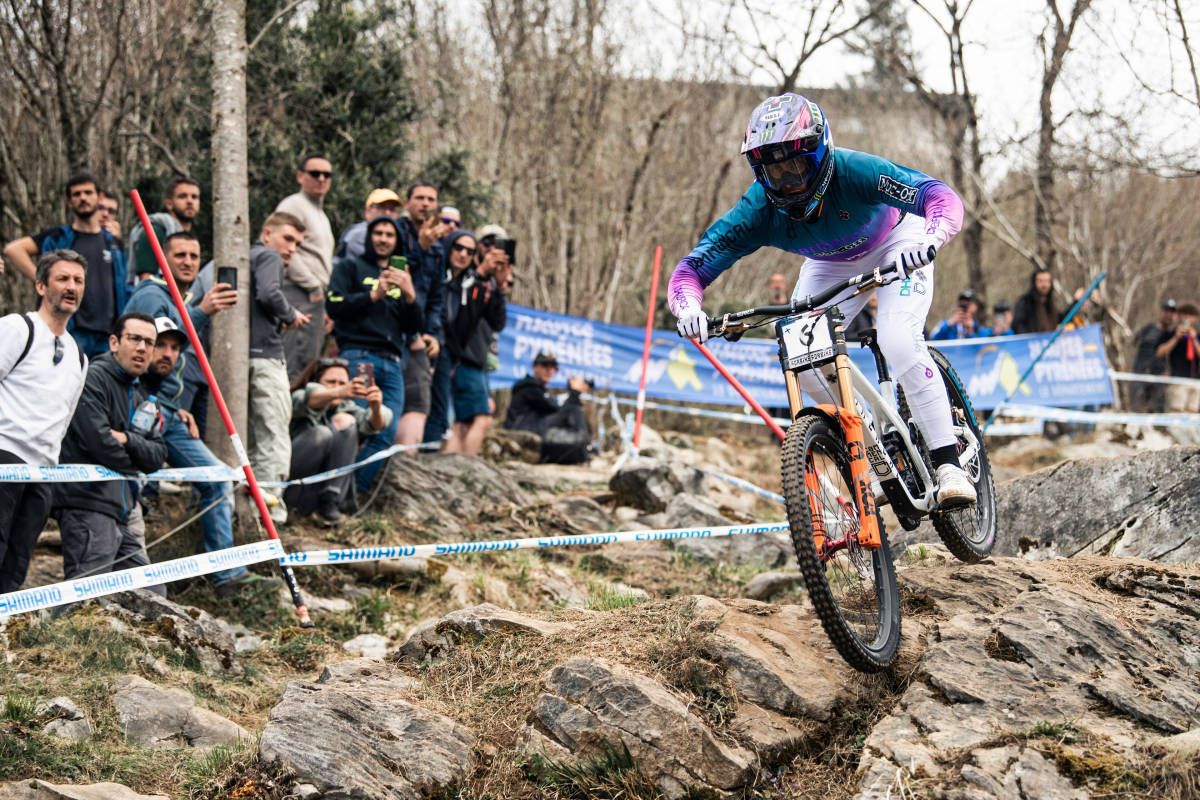 Second position for Finn Iles who rode on a knife’s edge, without making any mistakes, but it wasn’t enough to beat Pierron who bested him by just over 8 tenths of a second. Behind him, his team mate Loïc Bruni, winner of yesterday ‘s qualifying round, who was as always super precise but not as aggressive as usual, leaving that slight margin that allowed Pierron to take the lead. 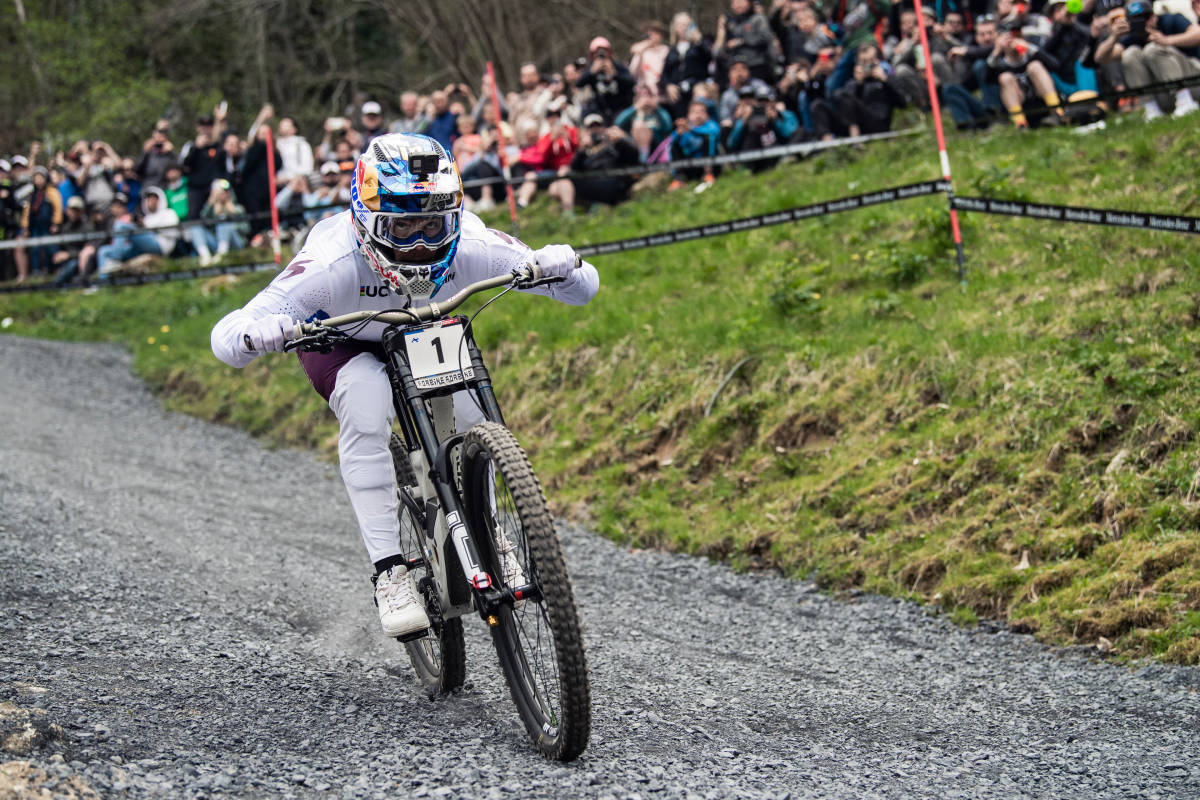 Fourth position for Coulanges Benoit, smooth and consistent throughout the run, demonstrated how clean riding can reward on a track like the one in Lourdes. 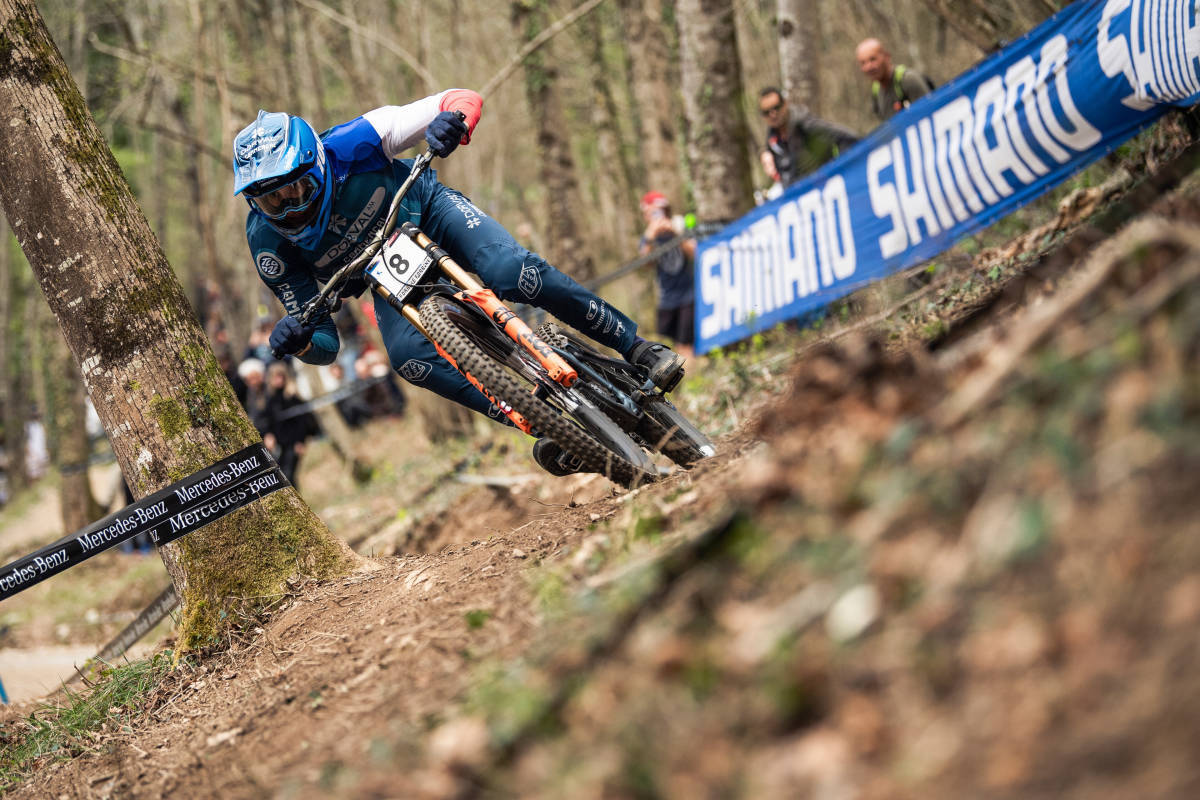 In fifth place a newfound Luca Shaw who appeared absolutely confident with the bike and with the track and, after a few seasons of ups and downs, often subdued, he proved to be fit and ready to fight for the podium positions. 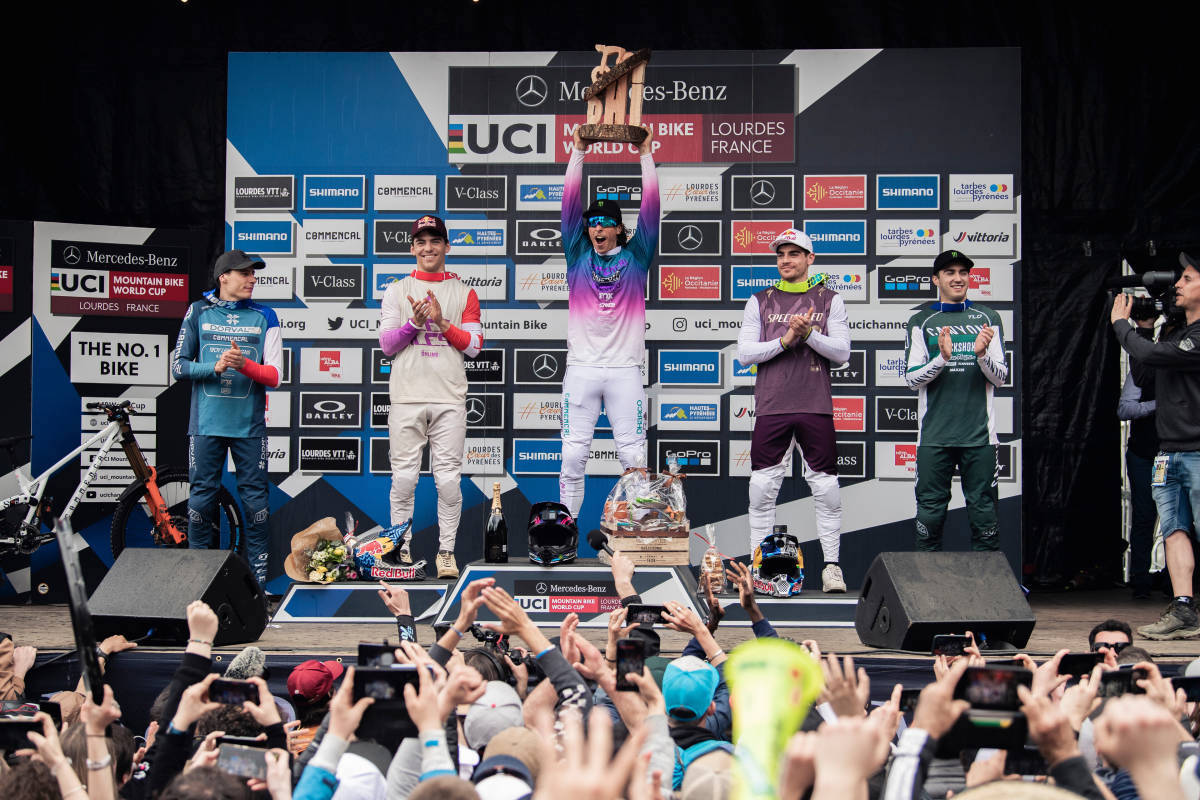 Other favorites like Daprela and Vergier crashed as they were setting absolutely competitive times. Dakotah Norton was the next fastest American with a solid showing in 11th place. 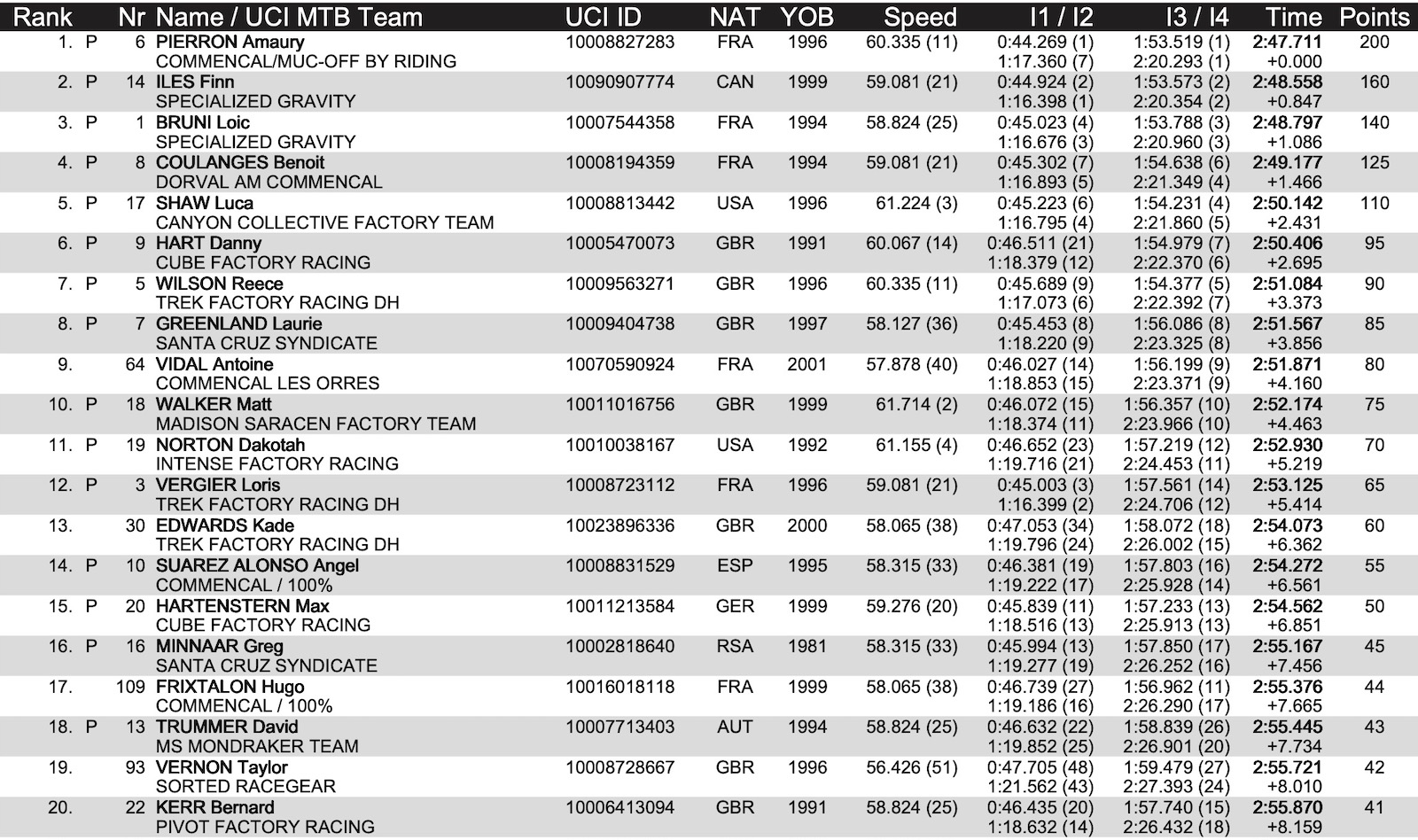 The women’s race was just as exciting with the top athletes playing for the leading positions on the bleeding edge managing the very difficult track and the high risk of errors that derive from it … and when you have to be careful to manage errors and riding precision is rewarded, Camile Balanche seems to have an edge. With a clean and error-free run she placed herself on the top step of the podium here in Lourdes and started the season leading the circuit overall. 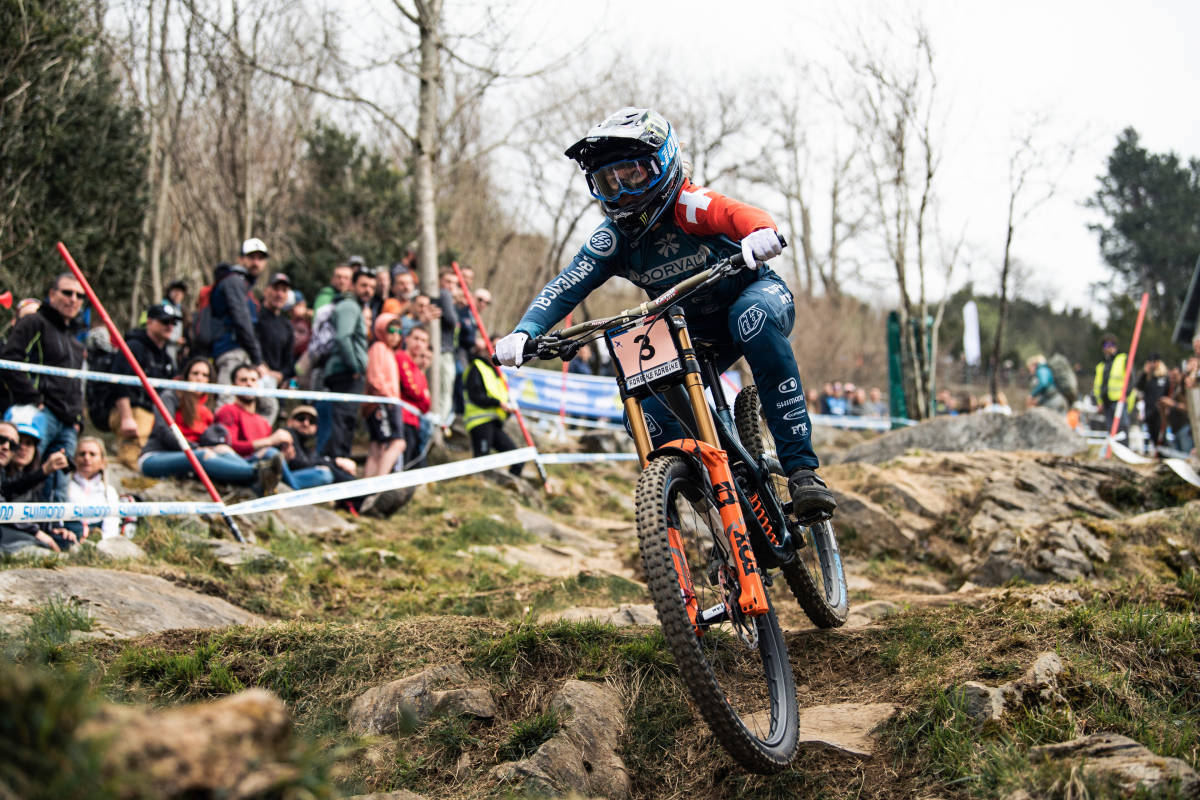 Myriam Nicole had an excellent alertness that allowed her to avoid the a near crash, but she lose time and she obviously some focus as well. In the rest of the run she found the rhythm and came dangerously close to Balanche, finishing in second place. 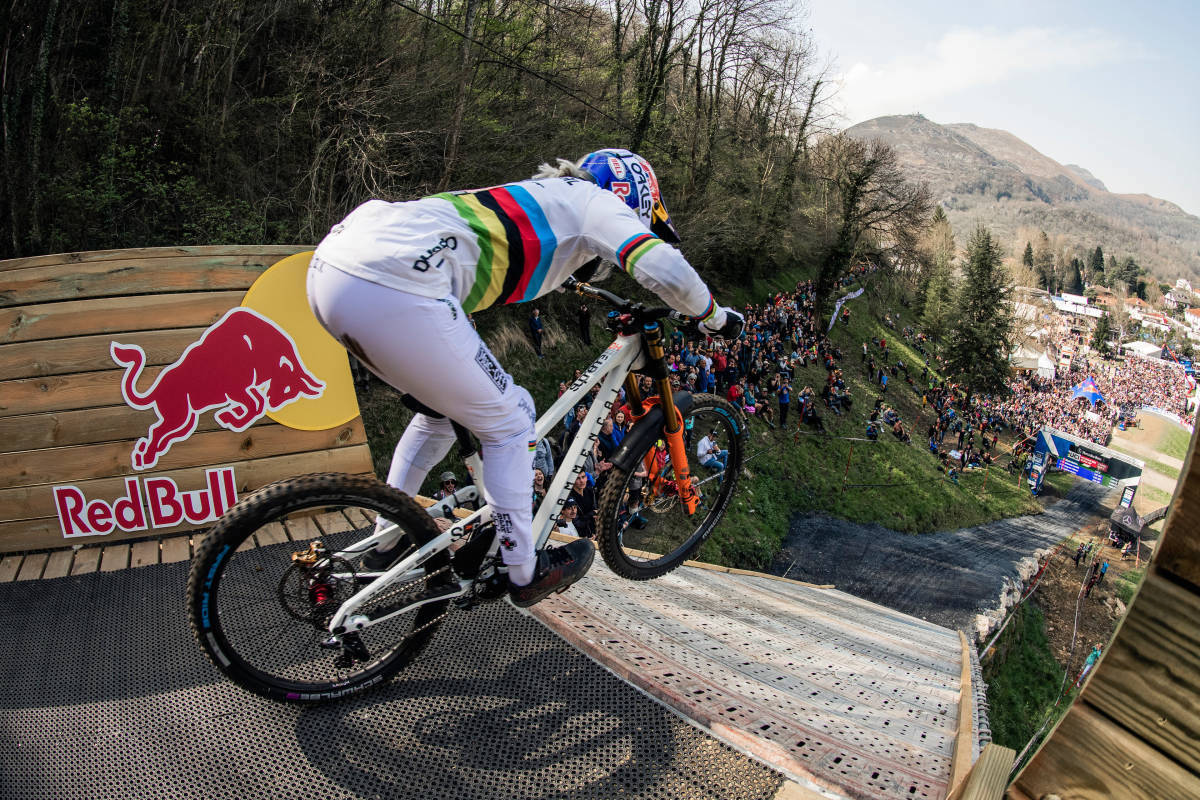 She didn’t make any big mistakes but Tahnée Seagrave was not particularly aggressive, as having recovered from an injury, has yet to find her pace to be 100% competitive. However, she showed that she was in shape, riding well and crossing the finish line in third place less than 1 second behind the winner’s time. 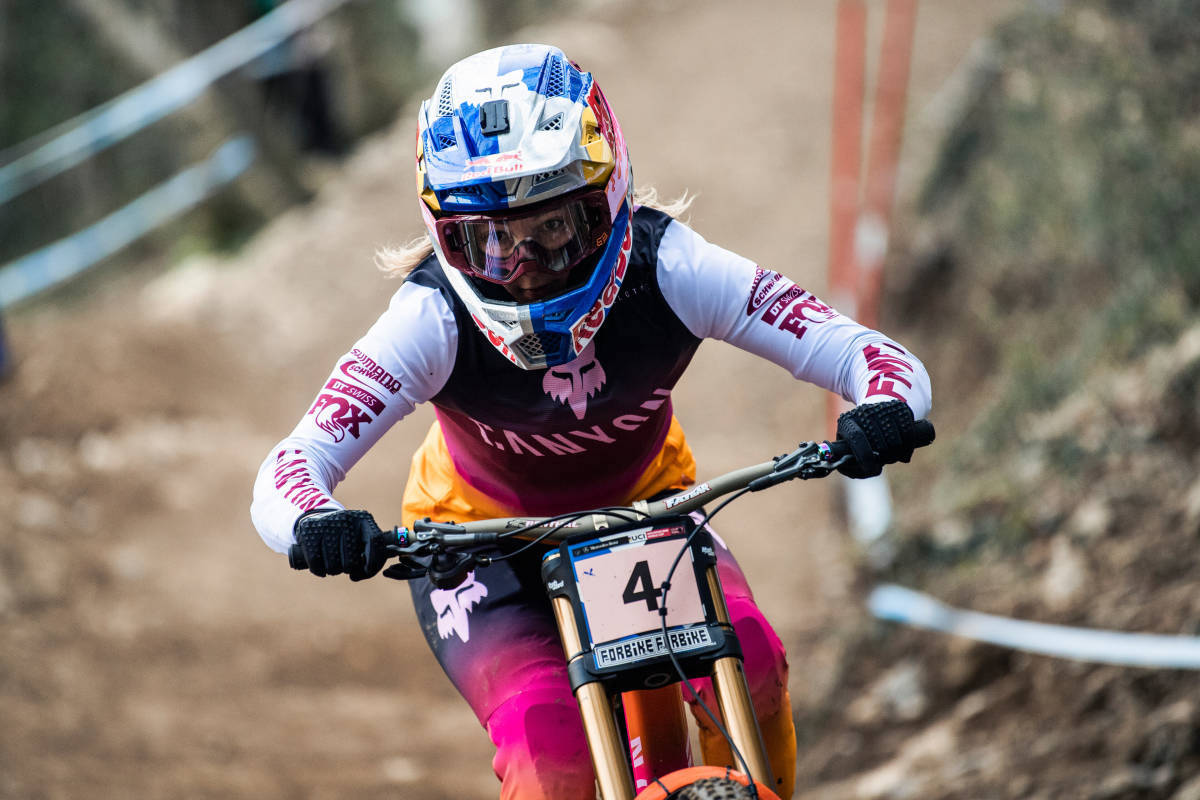 Valentina Höll was unable to do better than fourth, a bit conservative compared to her usual aggressive riding. 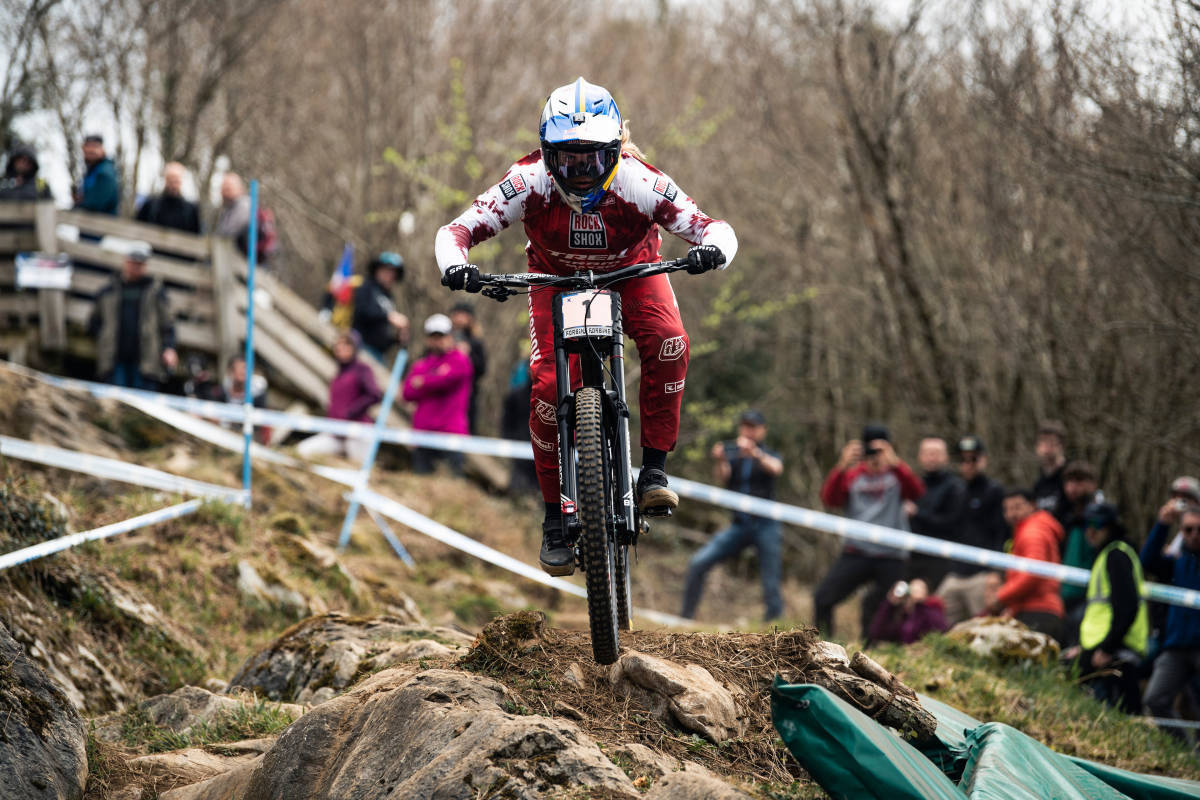 Fifth position for Marine Cabirou who does not seem to have found the luster that brought her numerous times on the first step of the podium in the past seasons. 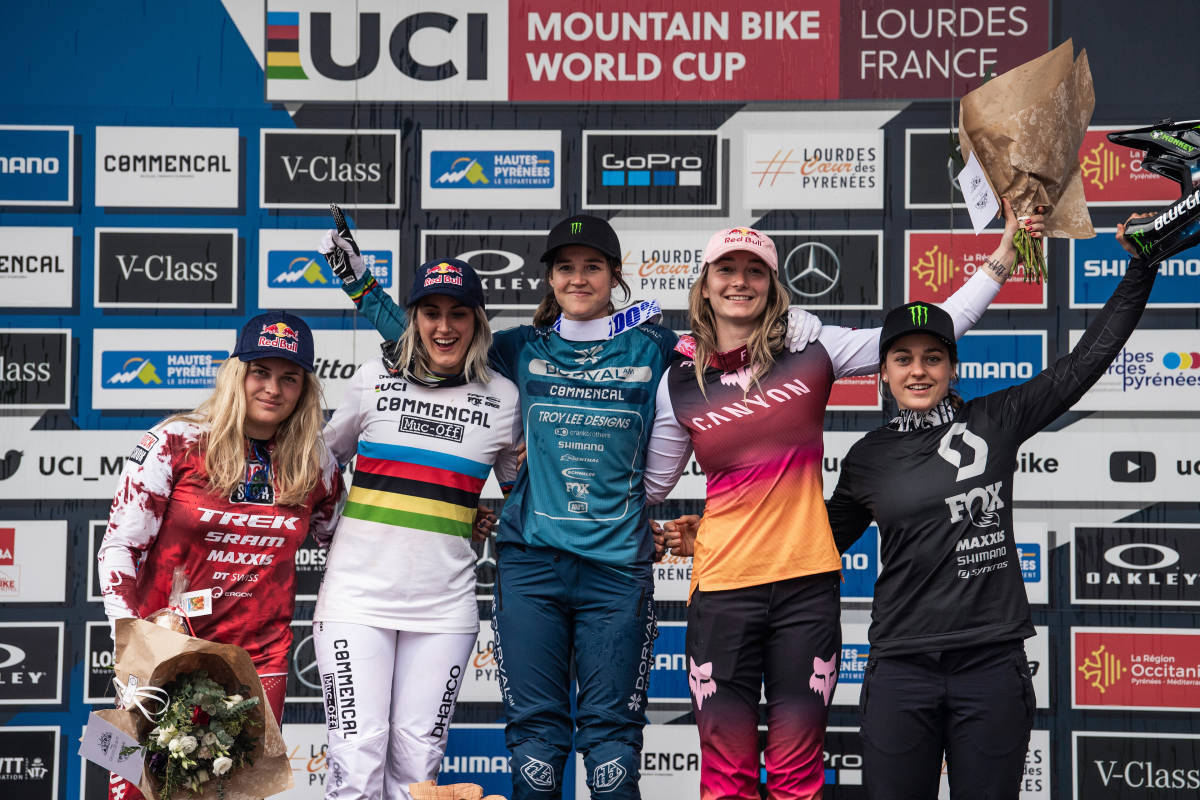 Anna Newkirk was the fastest American, in 17th place. 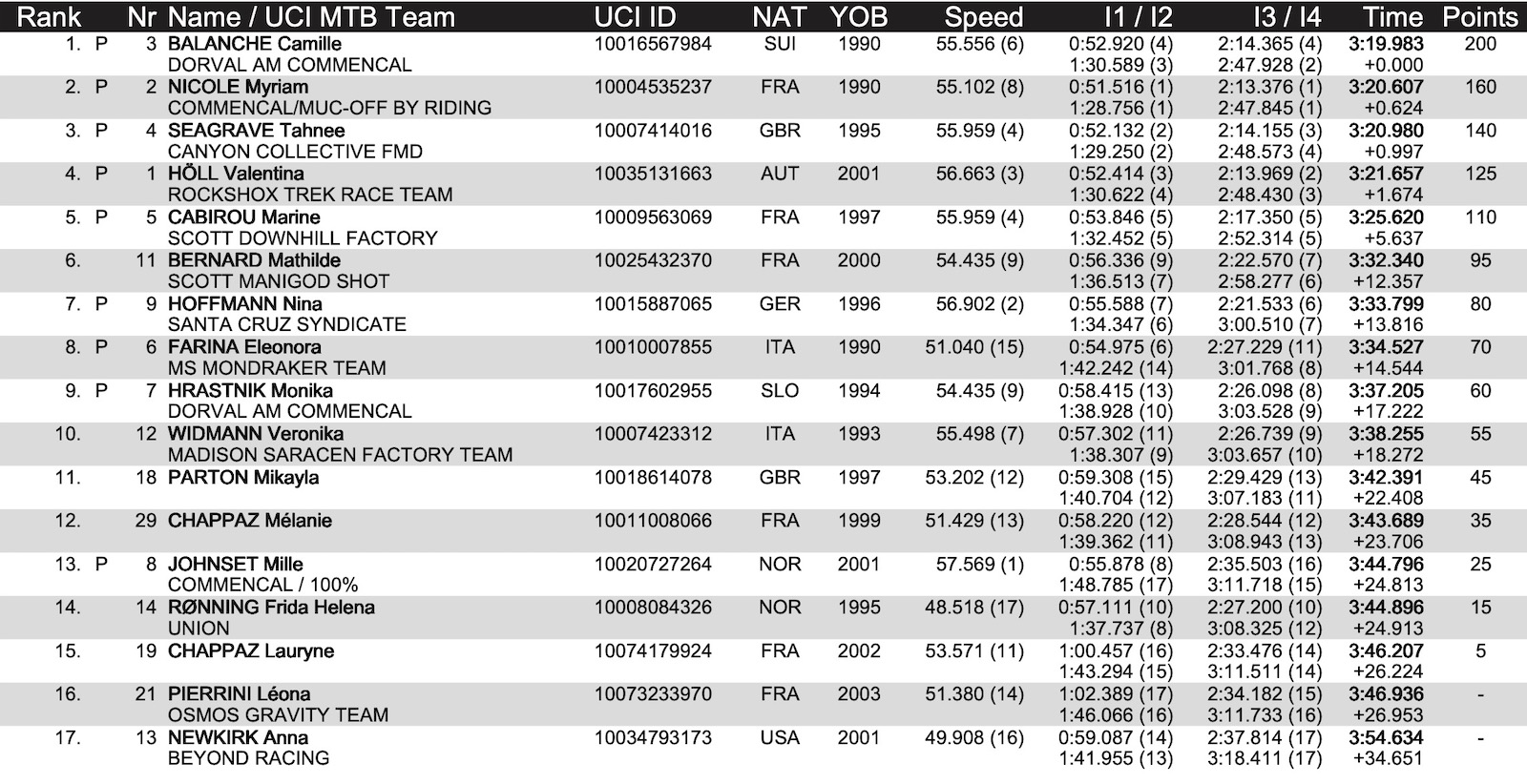 Among the Juniors, the world champion of the category and new recruit of the Syndicate team, Canadian Jackson Goldstone, won by almost 3 seconds ahead of Remy Meier-Smith. Third position for Jordan Williams. Gracey Hemstreet won the women’s competition showing that she’ll be one to keep an eye on in the future.

The World DH is back on track with the second round of the UCI DH World Cup 2022 on 21 and 22 May in Fort William, a historic location that has returned to the circuit after being absent due to last year’s anti-pandemic restrictions.