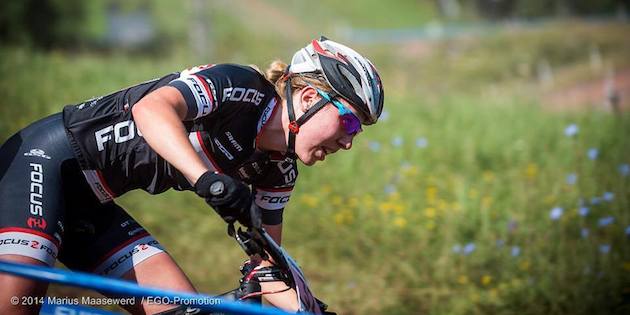 Sad news coming in from Meribel in France that Annefleur Kalvenhaar, 20 years old, from the Netherlands has passed away during the Cross Country Eliminator World Cup.

After sustaining injuries in a heavy crash. She hit her head after passing a wooden bridge in a downhill section and was immediately unconscious. According to the latest details she had a cerebral hemorrhage. She was flown by helicopter to Grenoble hospital, the same in which Formula One world champion Michael Schumacher was treated. Despite doctors best efforts they were unable to save her and the physiotherapy student died on Saturday morning in the presence of her parents.
Never in the 24-year history of the Mountain Bike World Cup there has their been a fatality.

Kalvenhaar was riding this season for the Focus XC team from Unterjoch im Allgäu. She was known as a strong cyclo-cross rider. Matthias Beck team boss commented, “She loved mountain biking…”  Despite the tragic accident, Matthias commented “We gave the athletes a free choice to start, but they all wanted to ride in remembrance.”

In a press statement by the UCI President Brian Cookson is quoted. “I’m devastated to hear that the cycling family has lost a member at such a young age. Our deepest sympathy goes to her family and friends. ”

Everyone here at MTB MAG would like to express our deepest condolences to her family, friends and athletes, she will be a severe loss to the cycling community.

UCI Statement on the situation