A while back I caved and jumped on the e-bike train. It was a decision mainly made for practicality’s sake – digging trail, photo missions, scouting, etc. are all way easier with extra help. Then, I started to really enjoy the bike and found that it was helping my riding as well as preventing burn out. I chose a Trek Rail for my very first e-bike primarily because of its modern geometry – Long reach, steep seat angle and a slack head angle paired to a short offset fork. Basically the numbers were super close to my go-to bike, the Transition Sentinel. Anyhow, over time it has served as a test bed for some products as well as a home base for some bits and pieces that I really like. I started out with the flagship AXS model, so this Rail began as a very nice machine, but I’ve also put my own touch on more than a few things… 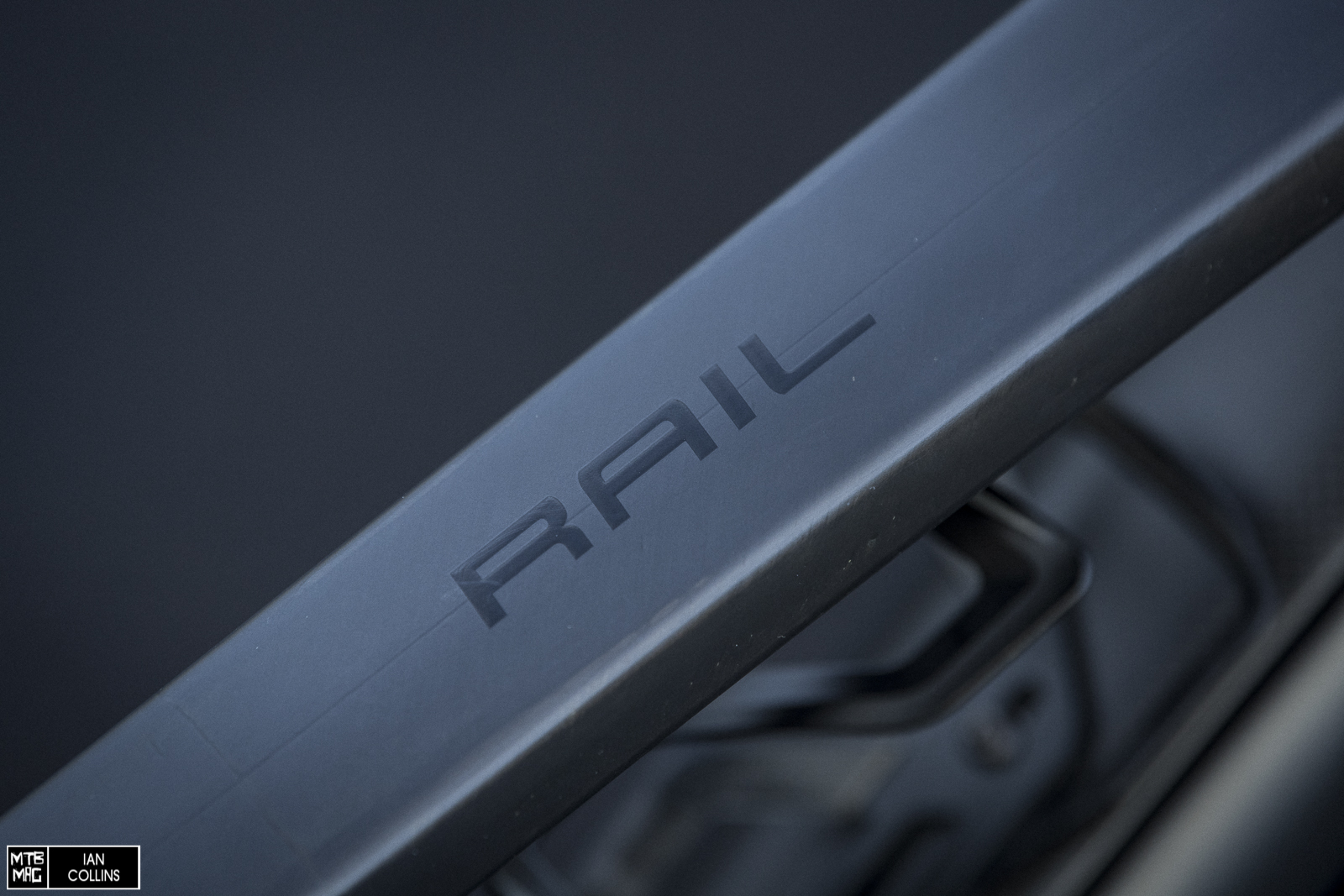 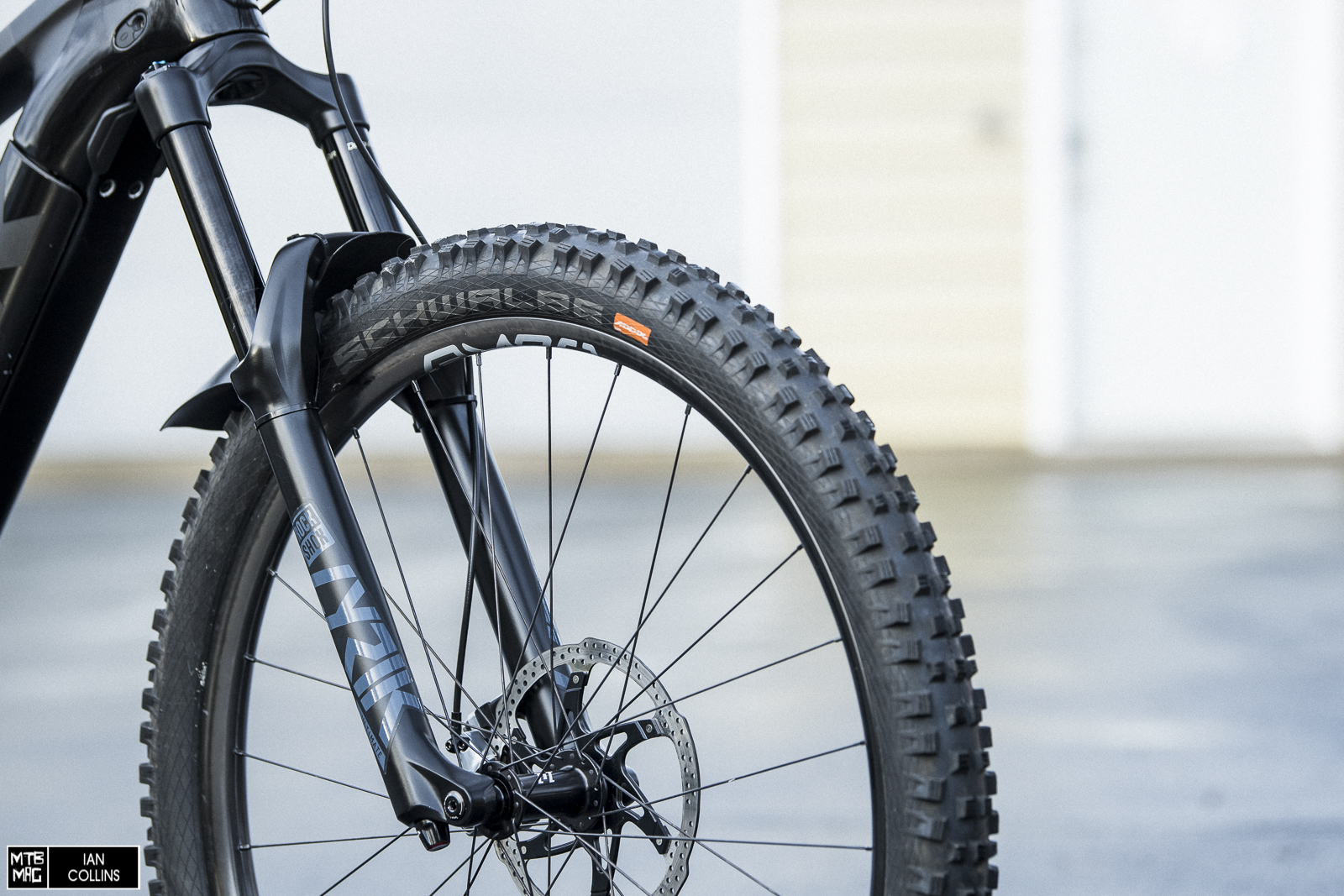 Starting up front, I installed the new C1 air spring and gave the Lyrik a travel bump to 170mm. 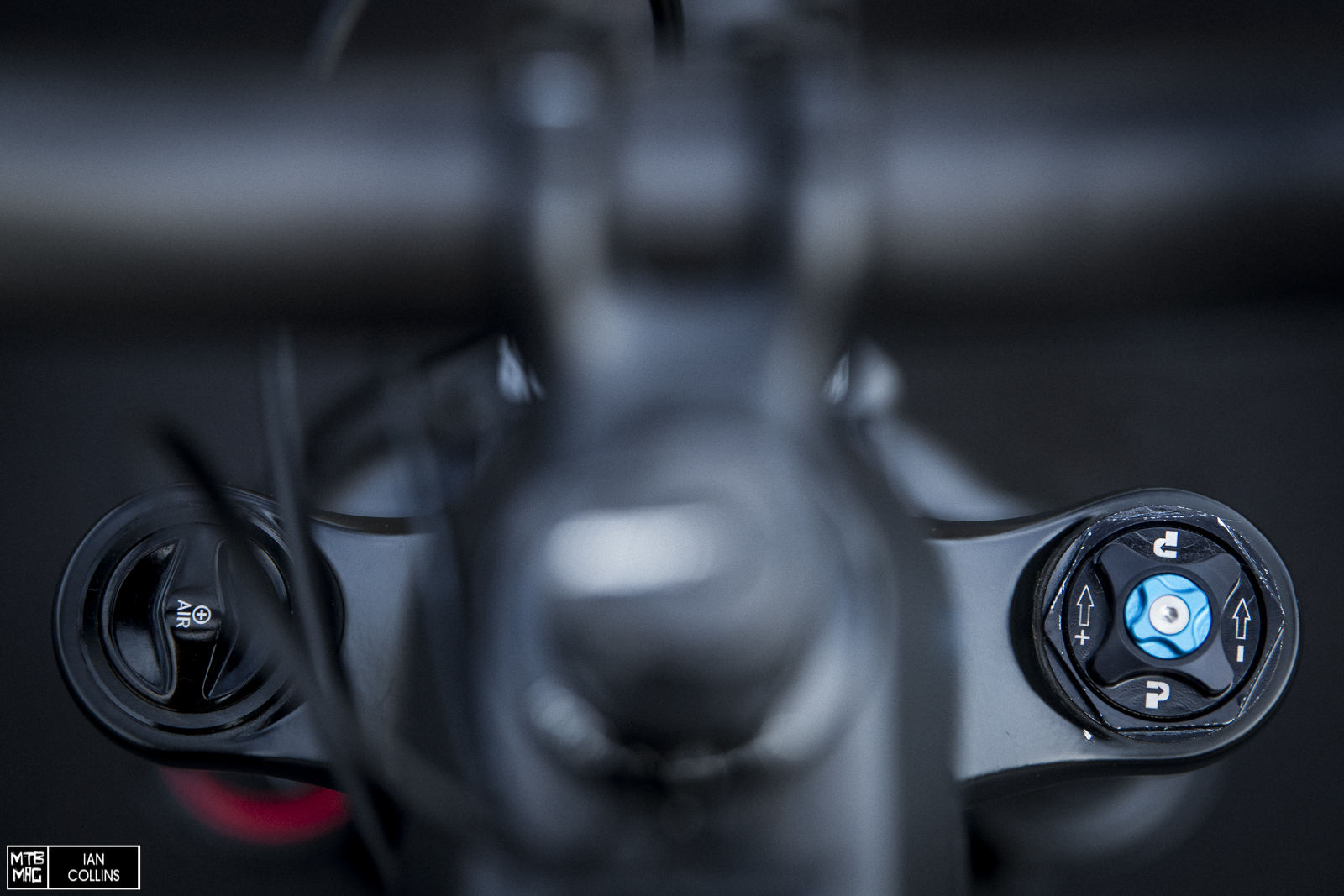 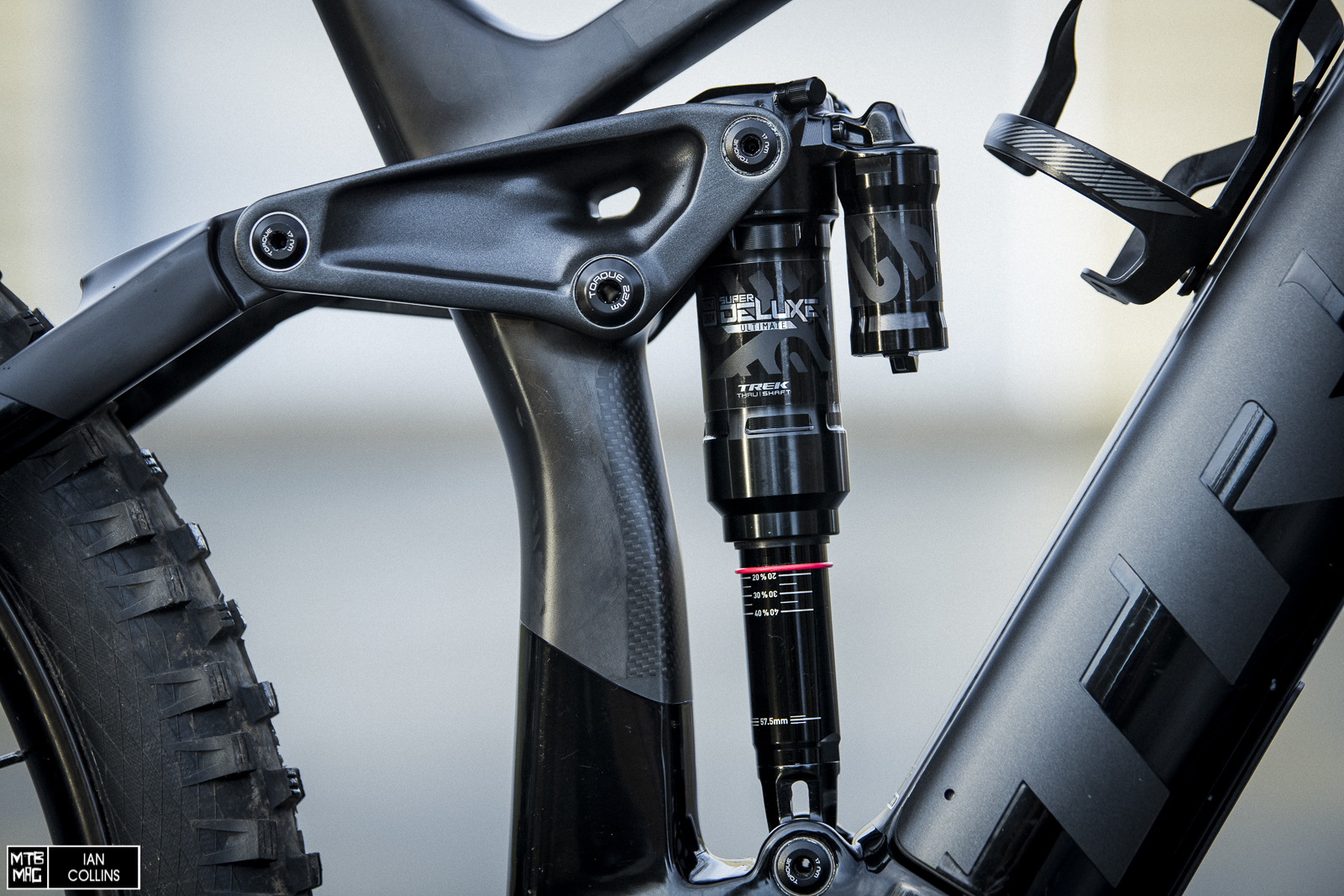 Out back, I installed the new RockShox Super Deluxe ThruShaft rear shock. After testing one on the Trek Slash, I knew I had to get one for my Rail. It’s an absolute game changer on this bike – small bumps, rough sections, big hits and everything in between are all handled in a much more composed manner with this shock. 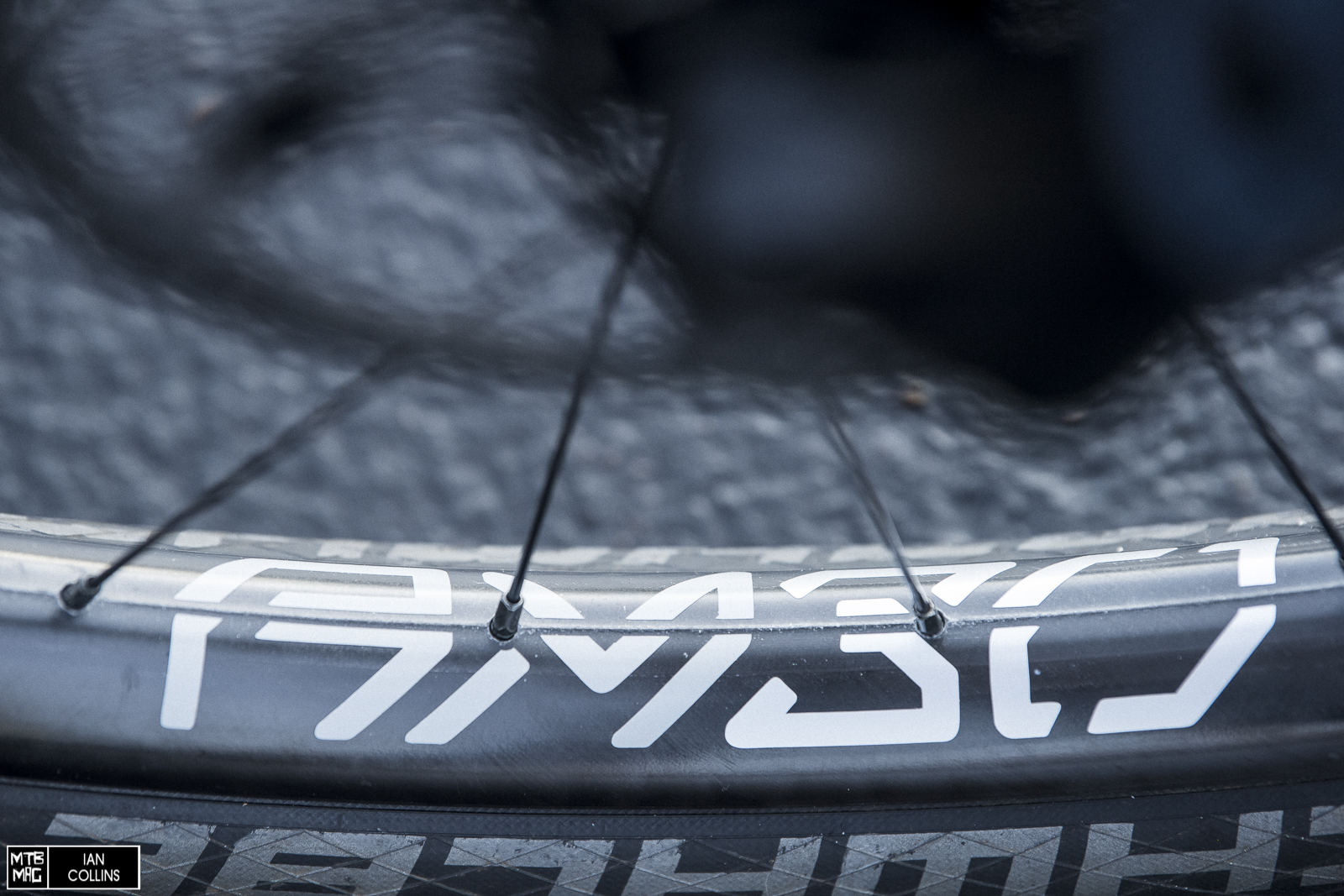 I recently tested the ENVE AM30 wheelset and found it to be impressively stiff and with much improved vertical compliance compared to ENVE wheels I’ve tested in the past. Therefore I thought they’d be very much at home on my e-bike. So far I’m absolutely loving them. They take the edge off a bit more than the stock Bontragers that the bike arrived with. For braking, I installed TRP’s DH-R EVO 4 piston brakes. I love the lever feel and as far as brake feel goes, I think they land nicely between Shimano and SRAM. The combination of modulation and power is tough to beat. Another bonus is that e-bikes take a beating and the TRP’s use 2.3mm thick rotors, which I’ve found to be much tougher than the average 1.8mm rotors on the market. Even despite the bike’s added weight, these brakes work incredibly well with standard 200mm rotors. E-bikes have enough going on with extra wires, buttons and displays, so I was happy to do a minimalist build with SRAM AXS helping to keep the cable count down. The derailleur’s extra clearance and brilliant “get out of the way” function is great as well because this bike goes off trail more than once in a while… Keeping with the minimalist motif, the RockShox Reverb AXS seatpost gets rid of yet another cable and simplifies things. It’s hands down my favorite seatpost. On the topic of keeping things tidy, the dropper lever and mode buttons actually place nice together and line up well. I normally prefer Sensus Meaty Paws when I don’t wear gloves, but the winter weather has me bundling up a bit more and thus, I opt for another favorite – the ODI Longneck V2.1 lock on grips. As far as personal preferences go, I’ve found the bottom bracket to be quite low on the Rail, even with the 170mm fork travel bump and short 160mm cranks. So, I’m in the high position full time on the mino-link. The Specialized Phenom Saddle has long been a favorite of mine. I’m not 100% sure why, but I just get along with it. The padding is minimal, but just right. It’s gotta be the contour… I’ve always loved DMR’s Vault pedals for their perfect contour, so when they announced a plastic version I knew I had to have them. They’re exactly like Aluminum Vaults but are far more affordable and don’t hang up on trailside objects as easily. OneUp’s carbon fiber handlebar has what is arguably the best ride quality out there. It really takes the edge off a bit more than most bars. I love the combination of the upsweep and backsweep. It feels just right. Tall front ends are fine by me, so the 38mm tall height is the go-to. Last but certainly not least is the formidable Schwalbe Magic Mary tire. I’ve been running Super Gravity casings in the 2.6″ width front and rear with the soft compound. The Magic Mary is hands down my all time favorite tire. Mud, Snow, Hardpack, Loose…You name it – the tires just work.

Thanks to Trek and everyone else who has helped with this project.