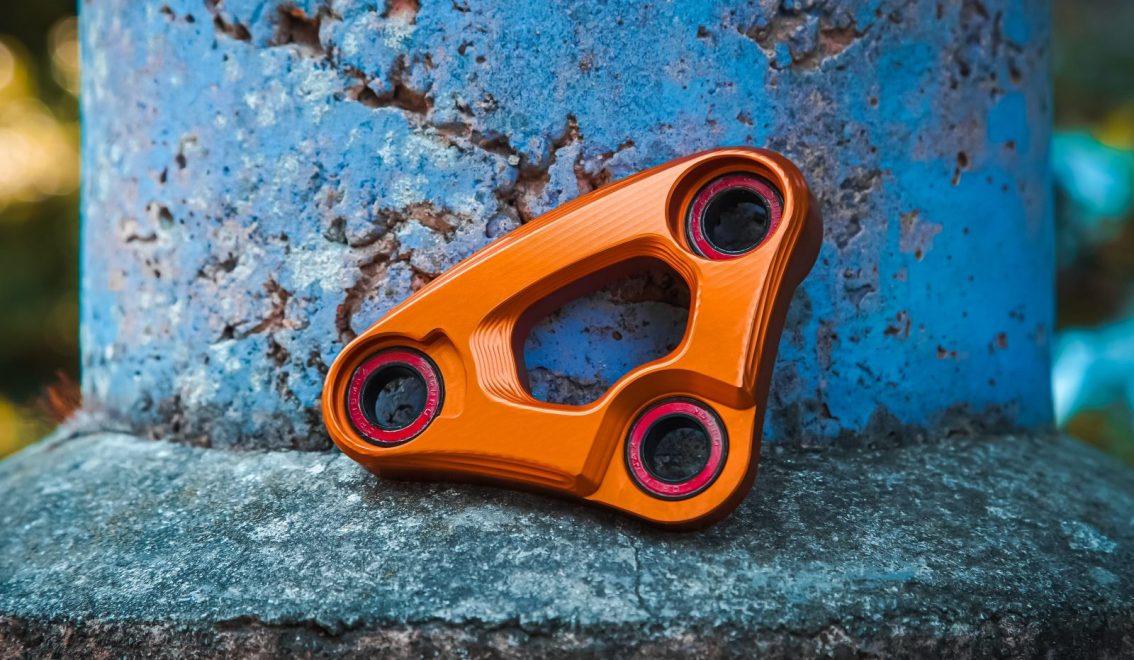 After a brief hiatus from press releases, we are pleased to announce and handful of new links! We have three and a half links in this press release so that you don’t have to read one of these every other week. The links we have details on below are the Evil Offering V2 link, the Ibis Ripmo V2 and AF links, and the 2018-2020 Giant Reign link. 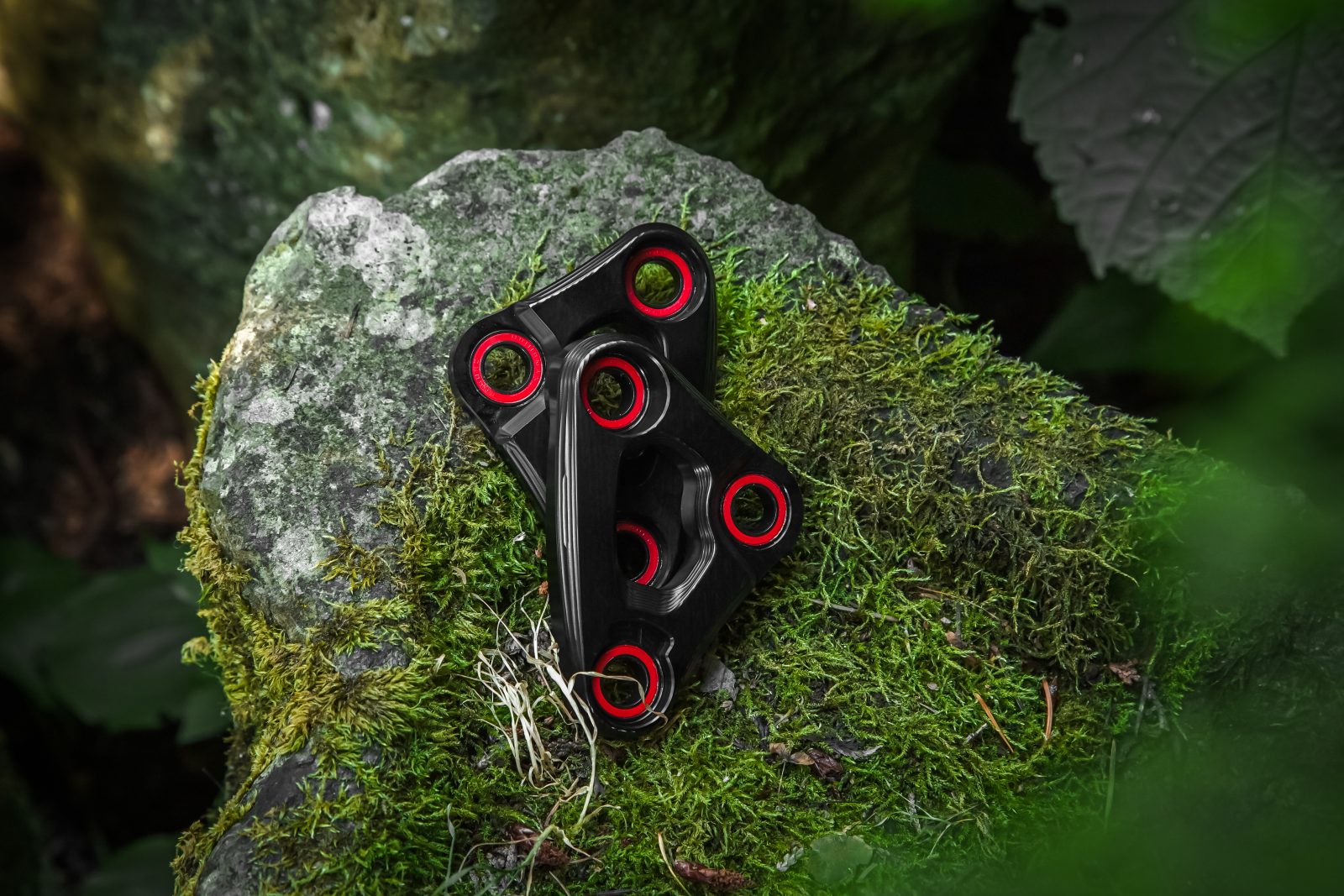 Alright we are keeping this one short and sweet because you have essentially seen it before. The V2 and V1 Offerings have extremely similar leverage curves. If you overlay them, you can hardly tell the difference in fact. So what can you expect out of this link? The exact same thing the V1 link has been doing for some time now. More ramp and an elimination of the flat region that exists around 50% shock stroke.

Available in black, silver, and orange 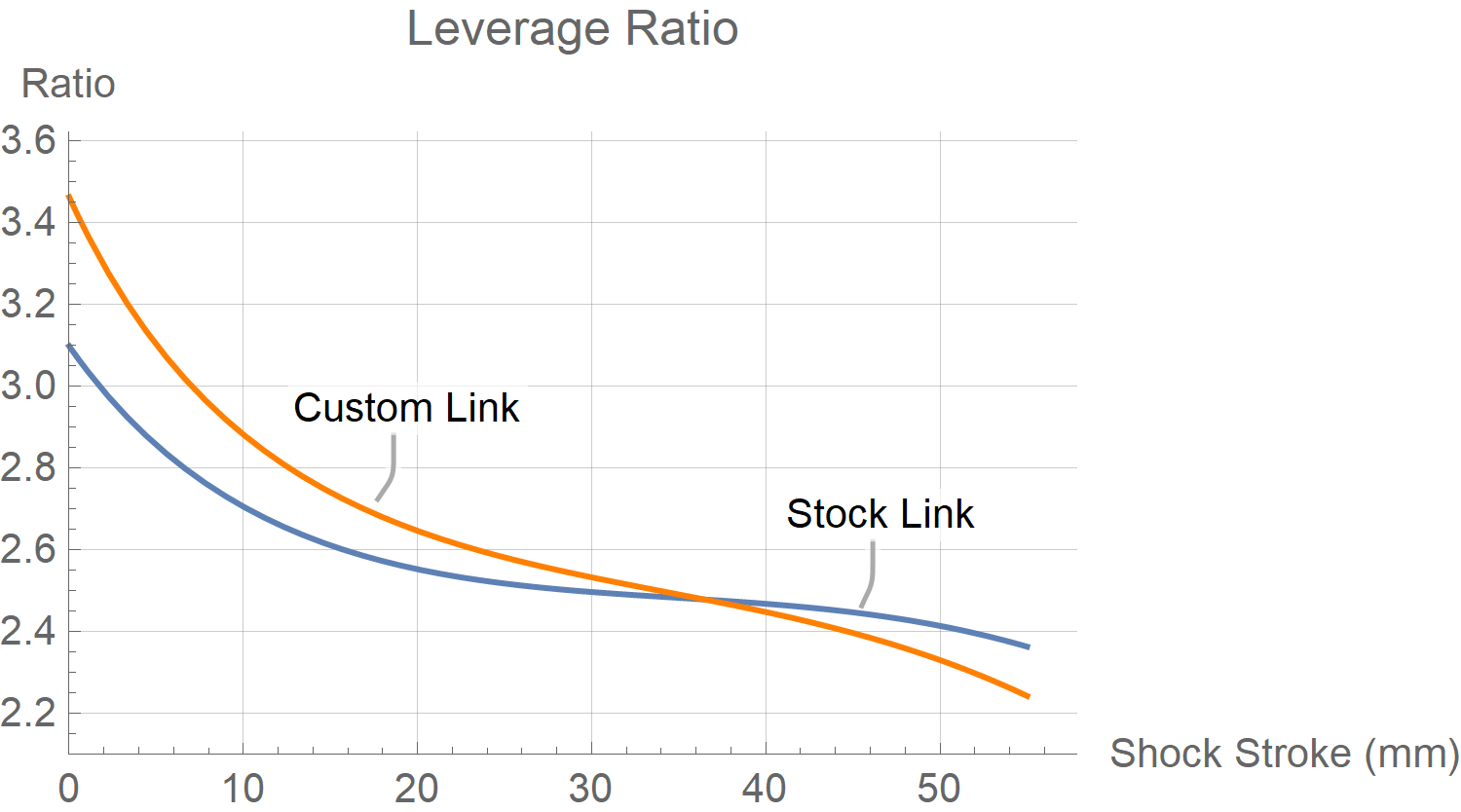 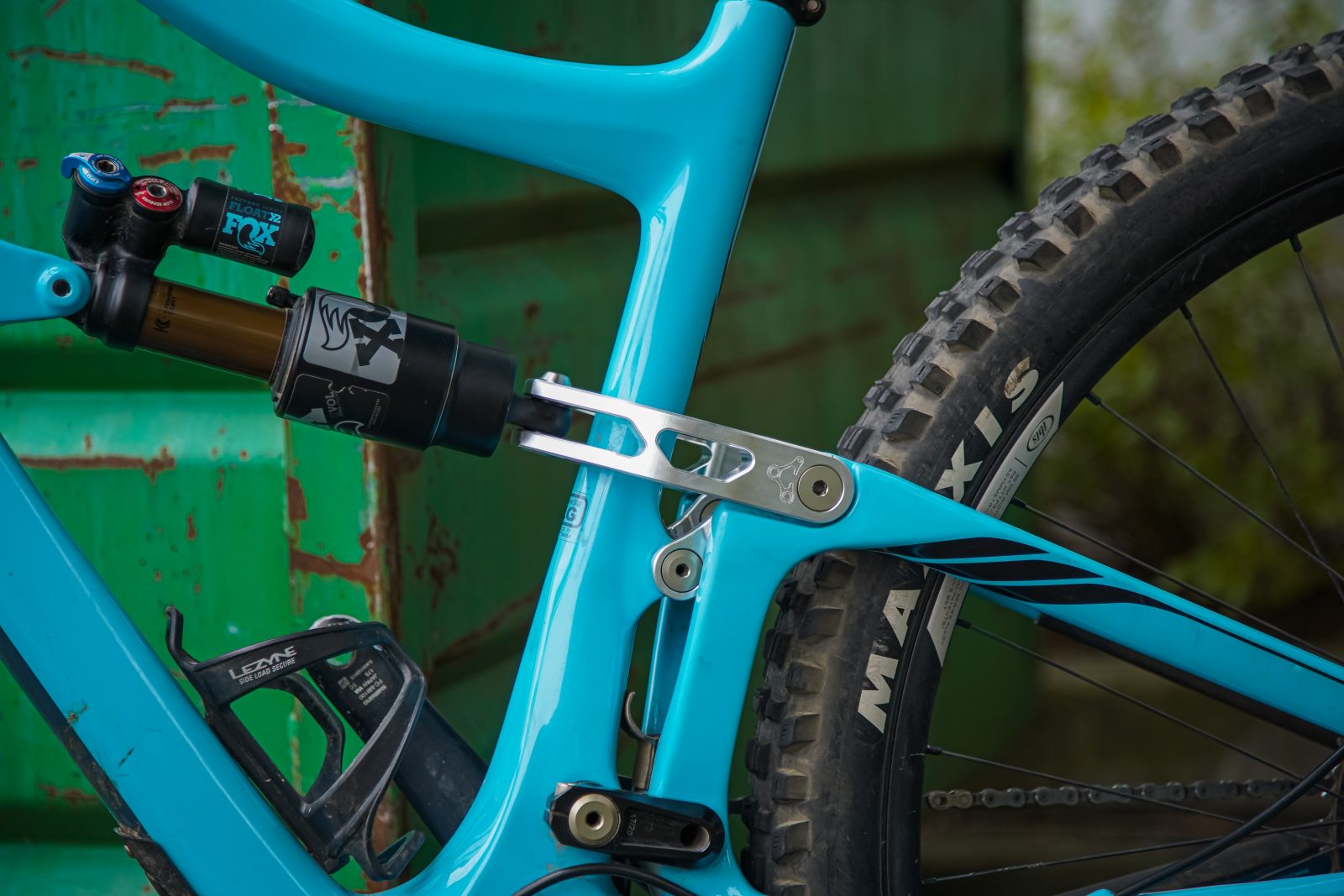 Our Ripmo V2 modifications include a different upper link as well as shock yoke. This allows significantly more ramp to be added especially at the end of stroke. Progression increases to 28% from 19% while travel stays at 147 mm for clearance reasons. As with the Offering links, this one eliminates the section of the leverage curve that is essentially flat. While this is our first link for an Ibis frame, the added progression functions as it does with any other frame. This means you can expect the suspension to feel more supple off the top, more willing to move up and over obstacles, and then smoothly ramp up as the shock moves through its stroke. 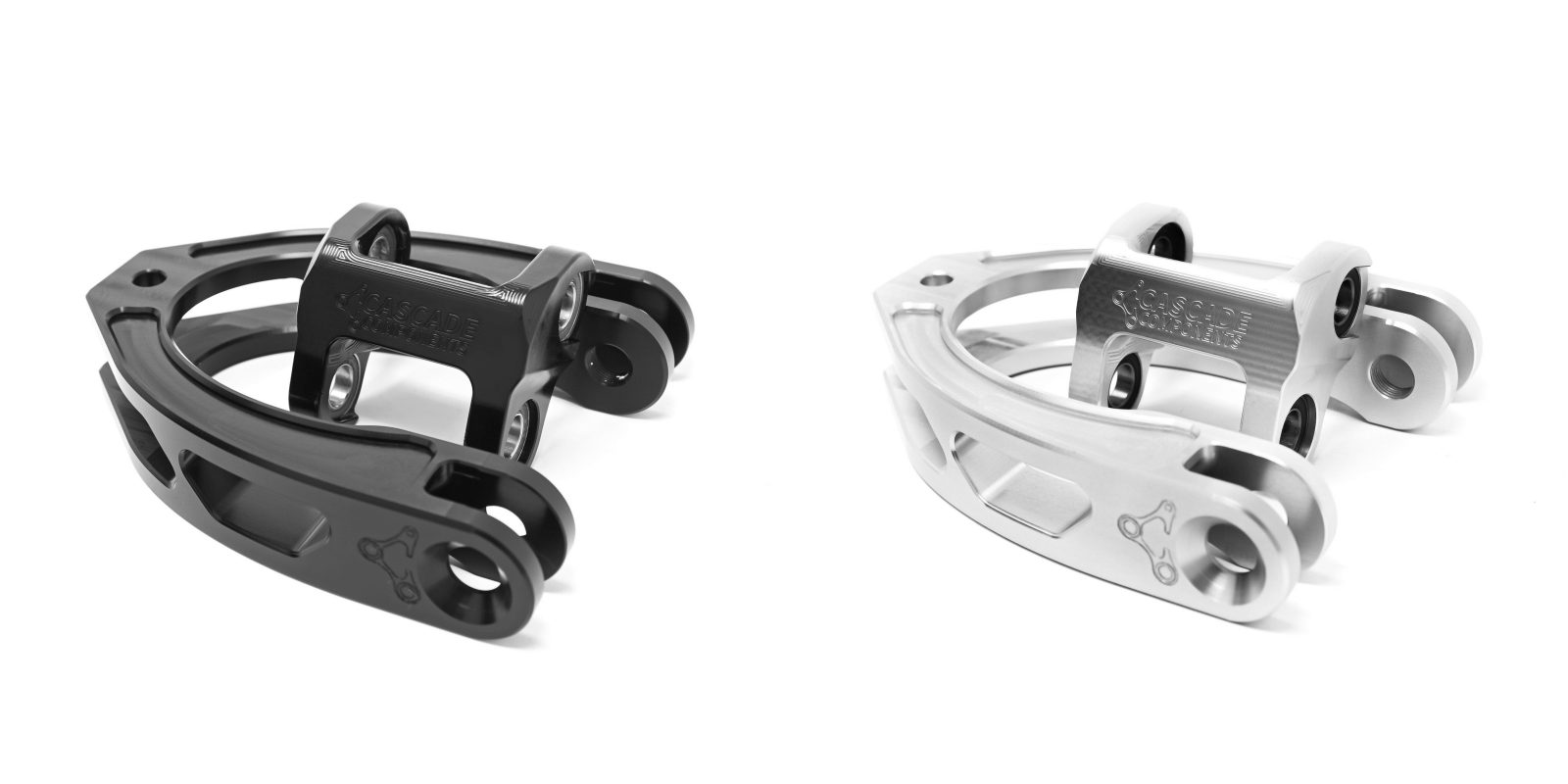 Available in black and silver

Now with this one we’re sure there will be lots of climbing questions. The change in pedaling performance is indiscernible. There is a decrease in anti-squat late in travel, relative to the stock linkage, but beyond that you won’t notice a difference. This decrease at the end of travel does mean there is a little less pedal kickback when you get into that region of the curve and hopefully you aren’t pedaling with it compressed that far. All that said, this is designed with the goal of improving descending and is intended to leave climbing as is. As far as geometry goes, this is the only link of the ones included here that has a real impact on geometry. The BB is lowered about 3 mm, which slackens the bike by about 0.25 degrees. We would advise people not to fixate on these numbers, though, because the additional mid-stroke support will result in the bike riding a little higher in its travel over terrain where the suspension is getting put to work. What we are getting at here is please don’t purchase this for perceived geometry changes since it might not feel the way you expect it with the different leverage curve. 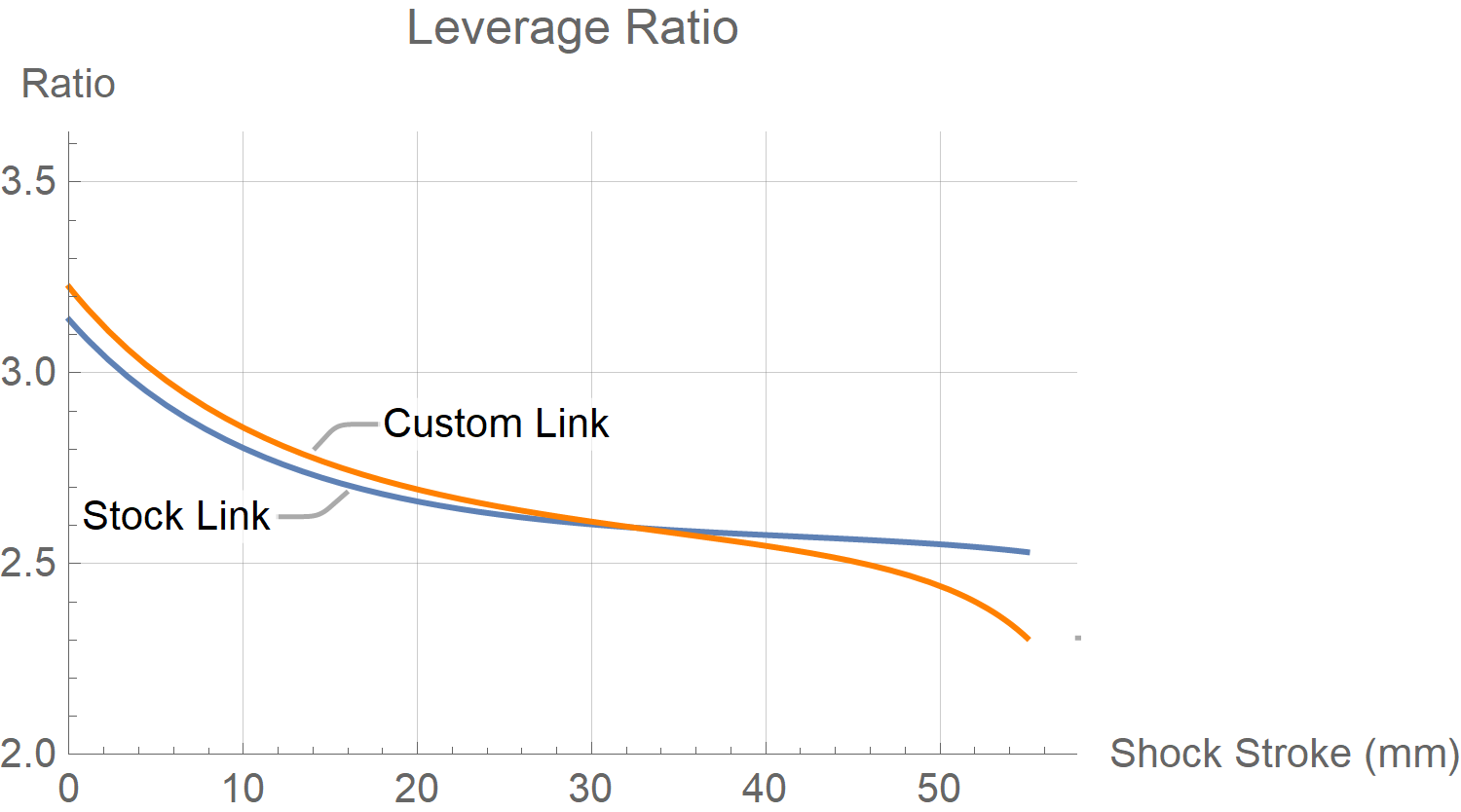 Before you ask, unfortunately this is not compatible with the Ripmo V1 and we are not sure when we will get around to a link for that one. 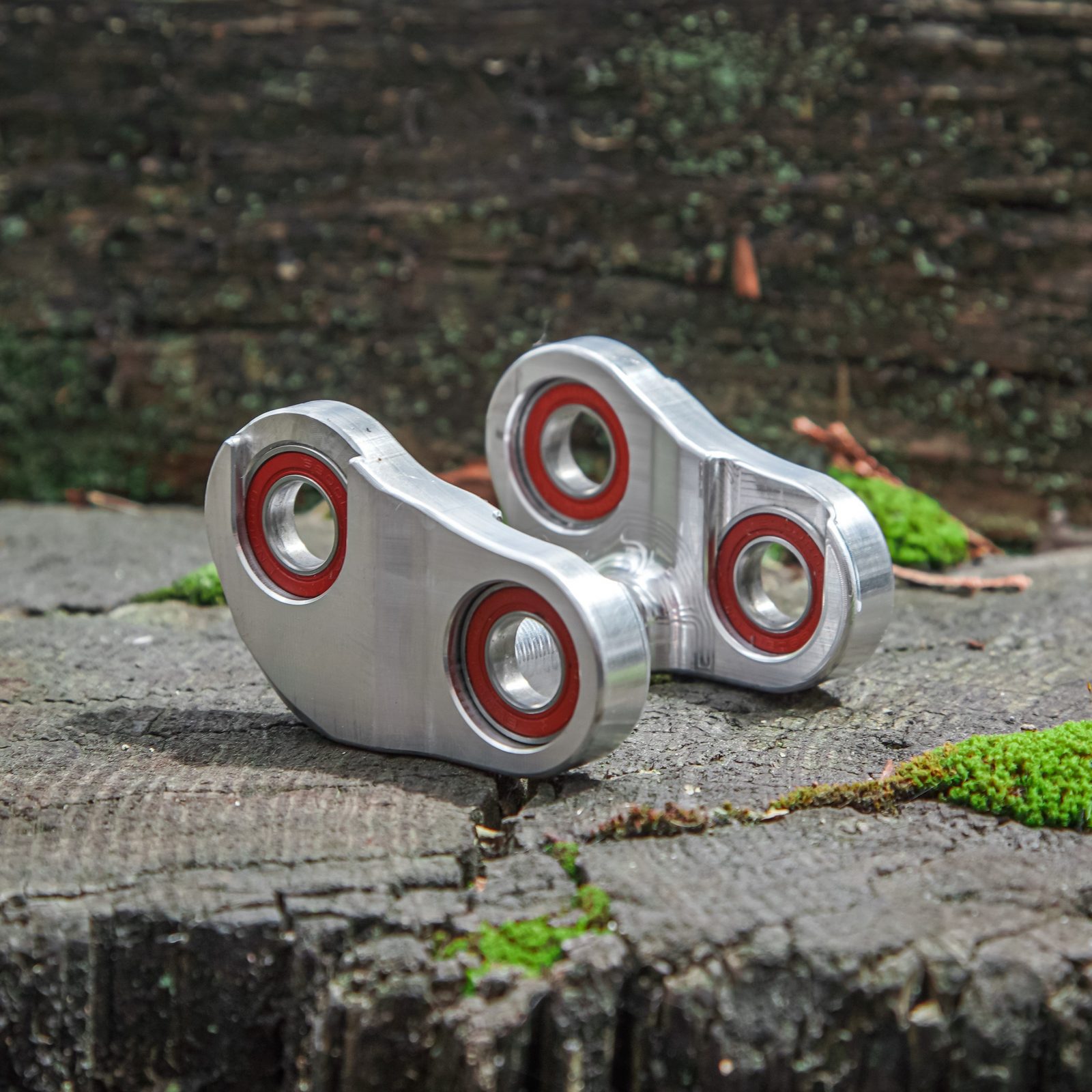 We’ll keep this one brief as well since the Ripmo AF shares its kinematics with the Ripmo V2. Because the Ripmo AF’s aluminum frame is less bulky around the BB and lower rear triangle area, all that is needed is the upper link, hence the lower cost. If you’re wondering why the yoke is so expensive, it all comes down to material and machine time. The upper link is quite small. Now if you’re wondering why the Ripmo AF has a little more travel and progression than the Ripmo V2, it’s because of the stock shock yoke. If there weren’t clearance issues with the stock yoke on the V2, it would have kept that as well. So the Ripmo AF receives 151 mm of travel and 31% progression.

Again, with the climbing this behaves similarly to our V2 link. Technically it sits a hair higher in the anti- squat curve than the set up on the V2 does, but that is not noticeable on trail. As for geometry, because the shock yoke is the same, the drop in BB height and slackening are practically eliminated. 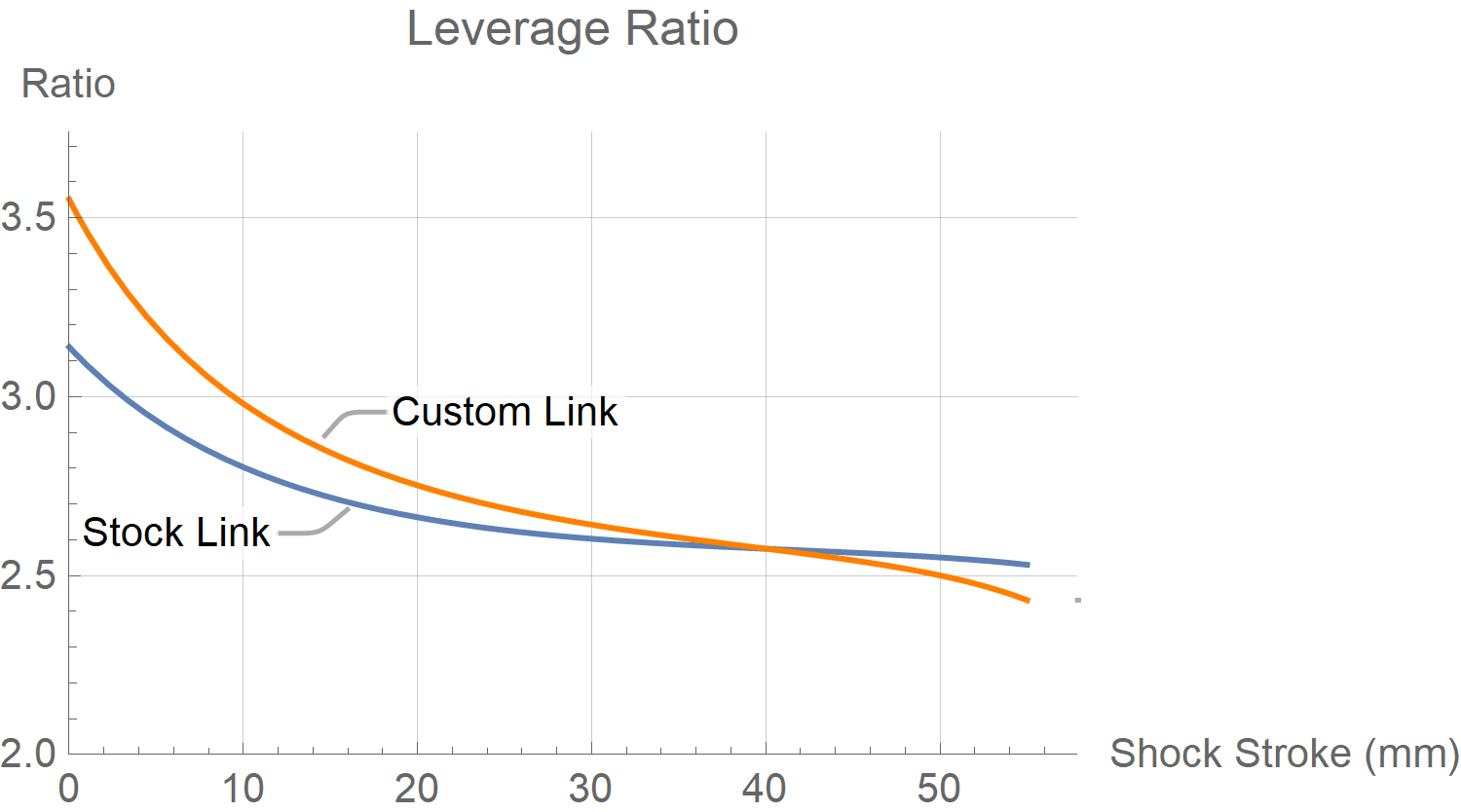 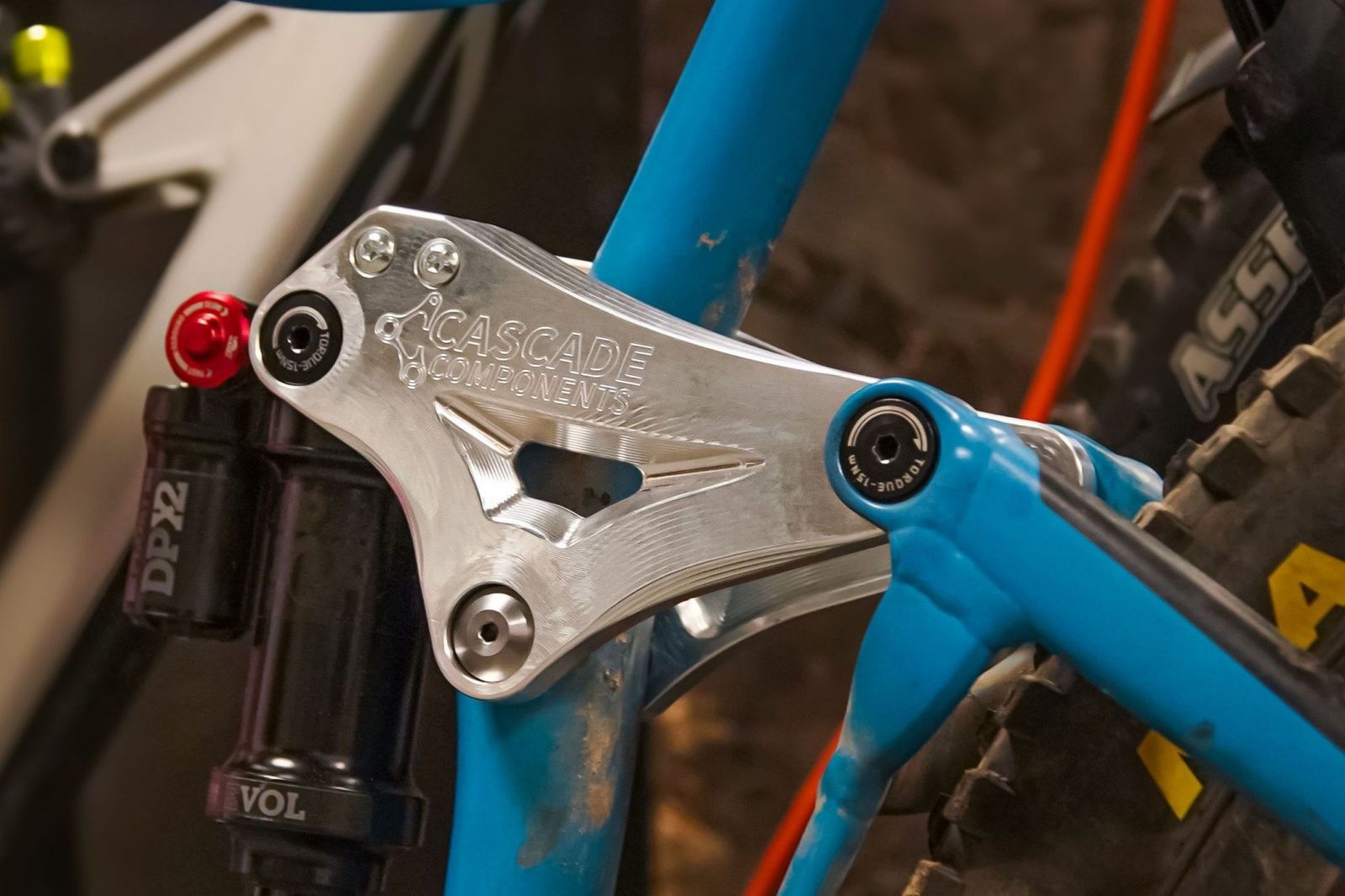 We believe this link has the potential to entirely change your perception of the 2018-2020 Giant Reign. When we dove into the kinematics for the Reign, we quickly realized that there was a lot of potential to increase progressivity. The link in combination with a small shock extender increase the amount of progression to 36% from 19%. Travel with this frame is left at 162 mm for clearance reasons. 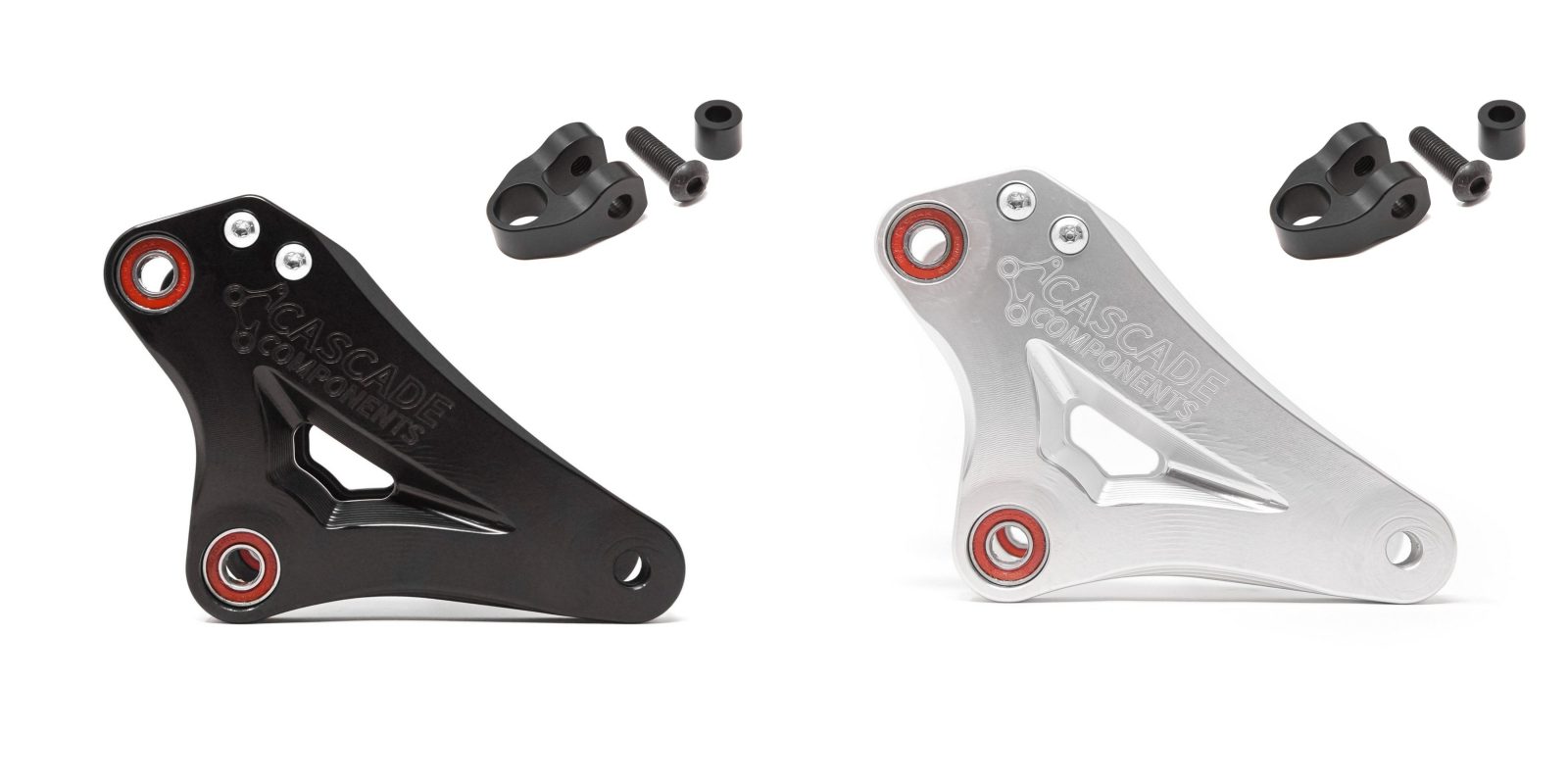 Available in black and silver

This large increase in progression is quite noticeable and makes small bump sensitivity and bottom out resistance fantastic. 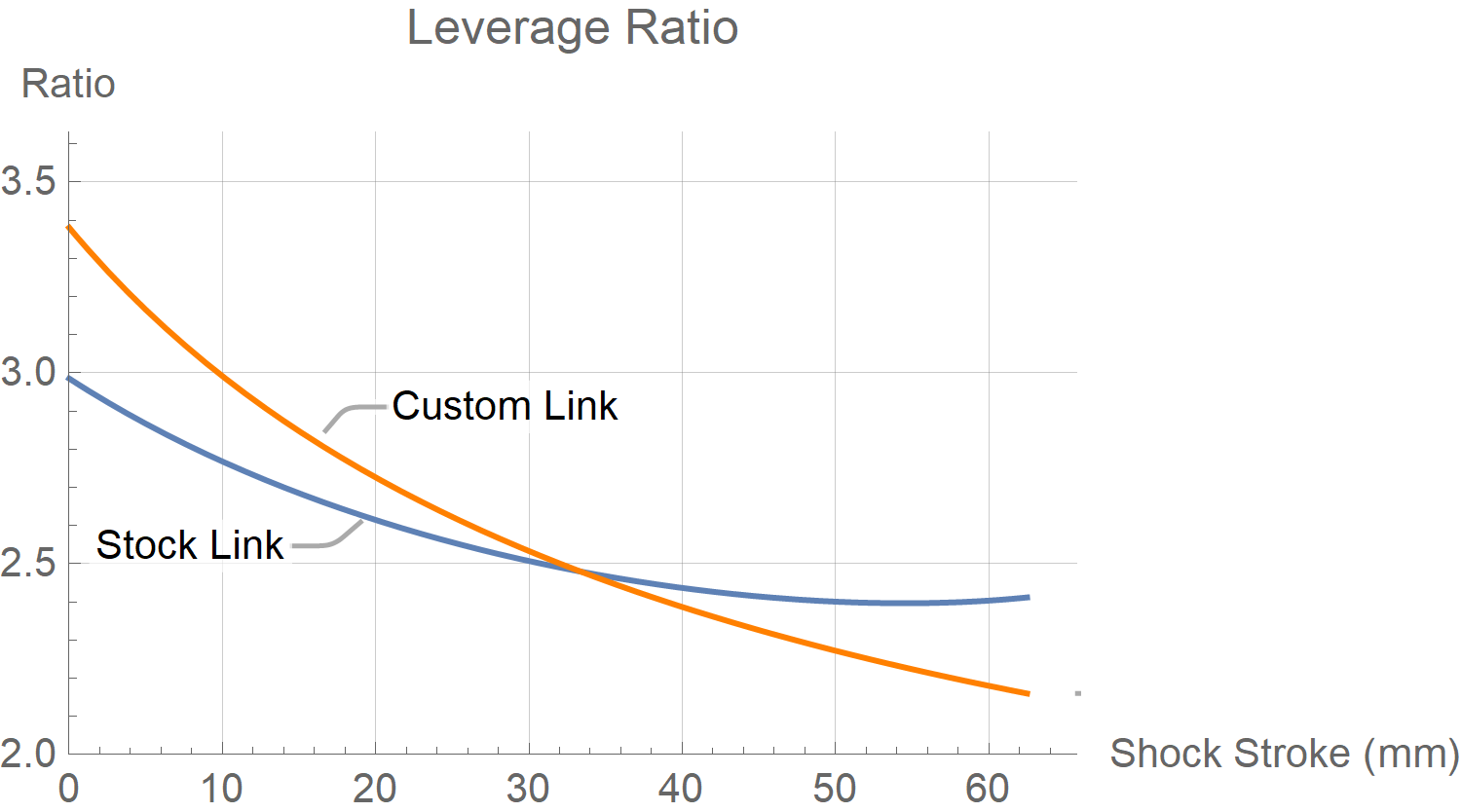 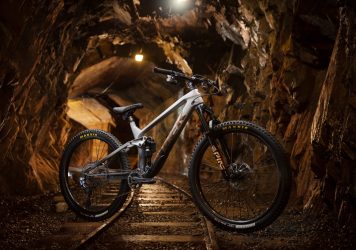 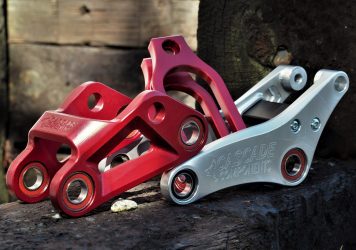 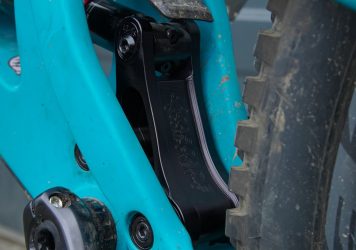