The US resort in Snowshoe, West Virginia welcomed the sixth round of the UCI DH World Cup circuit with an exquisitely old school track. After days of testing on a slimy mud that made the course extremely difficult, today’s sun began to dry the ground allowing the athletes to increase the pace and manage the race better, but not enough to avoid crashes, mistakes and risks that have been a constant in this event and have relegated many of the favorites to the rear, leaving room for several outsiders.

Amaury Pierron had to fight, fight with all his strength to succeed in this race, and his exultation at the finish showed how much effort this victory took. He simply was not allowed to make mistakes and he didn’t, he rode at absolute his best, with determination and poise. 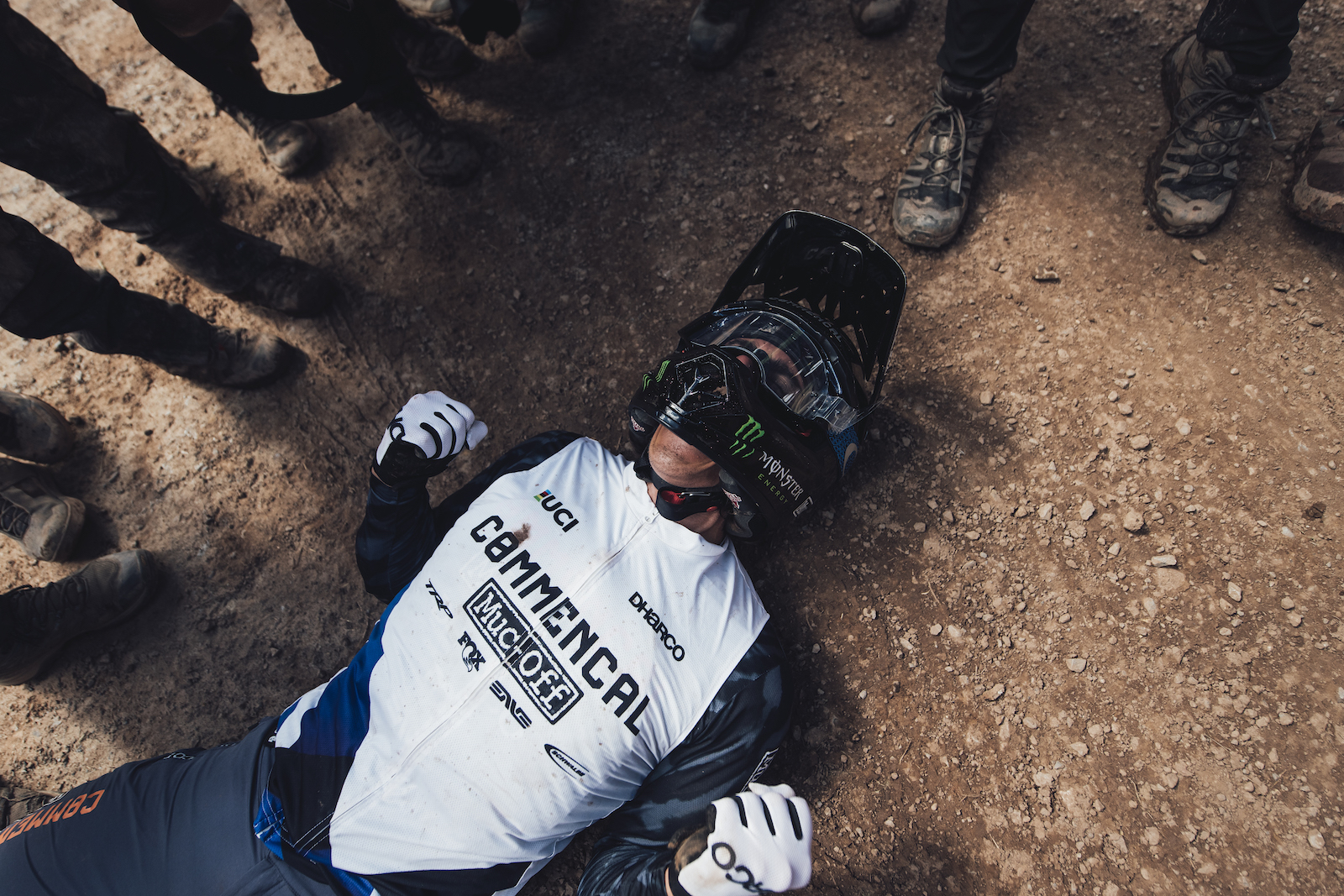 The French champion is showing not only talent, but a lot of experience and intelligence in his approach to racing. His dominance in the overall standings is the well-deserved reward. 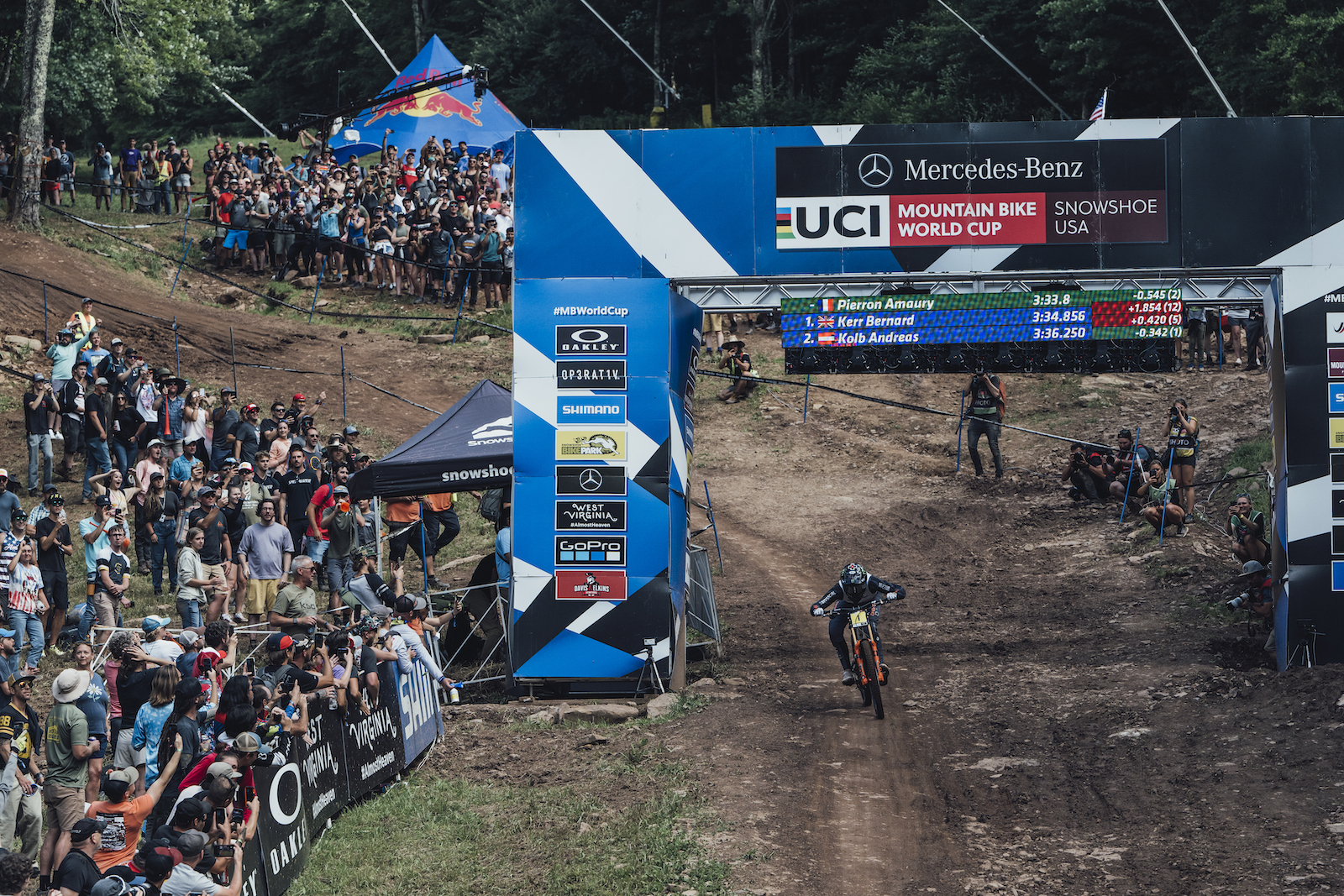 Bernard Kerr nailed a perfect run, pushing hard but making no mistakes, incredibly precise and smooth, the three-time winner of the Red Bull Hardline climbs to the second step of the Snowshoe podium. 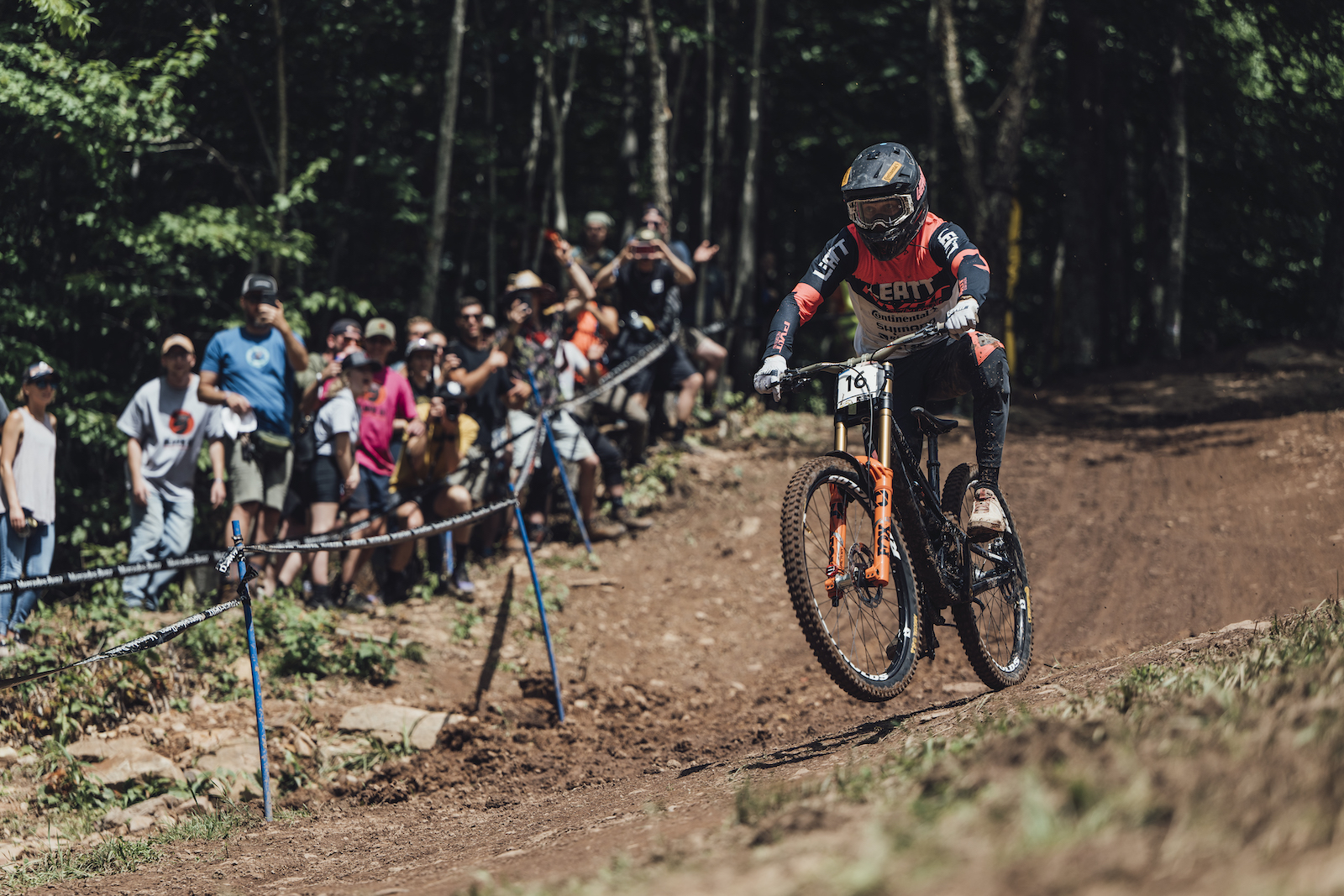 Phenomenal Andreas Kolb who, apart from a small uncertainty, for the rest of the run literally seemed like a train running on the tracks, regardless of the slippery and bumpy course. The Austrian is experiencing a golden season with several podiums and his current fifth place in the overall standings. 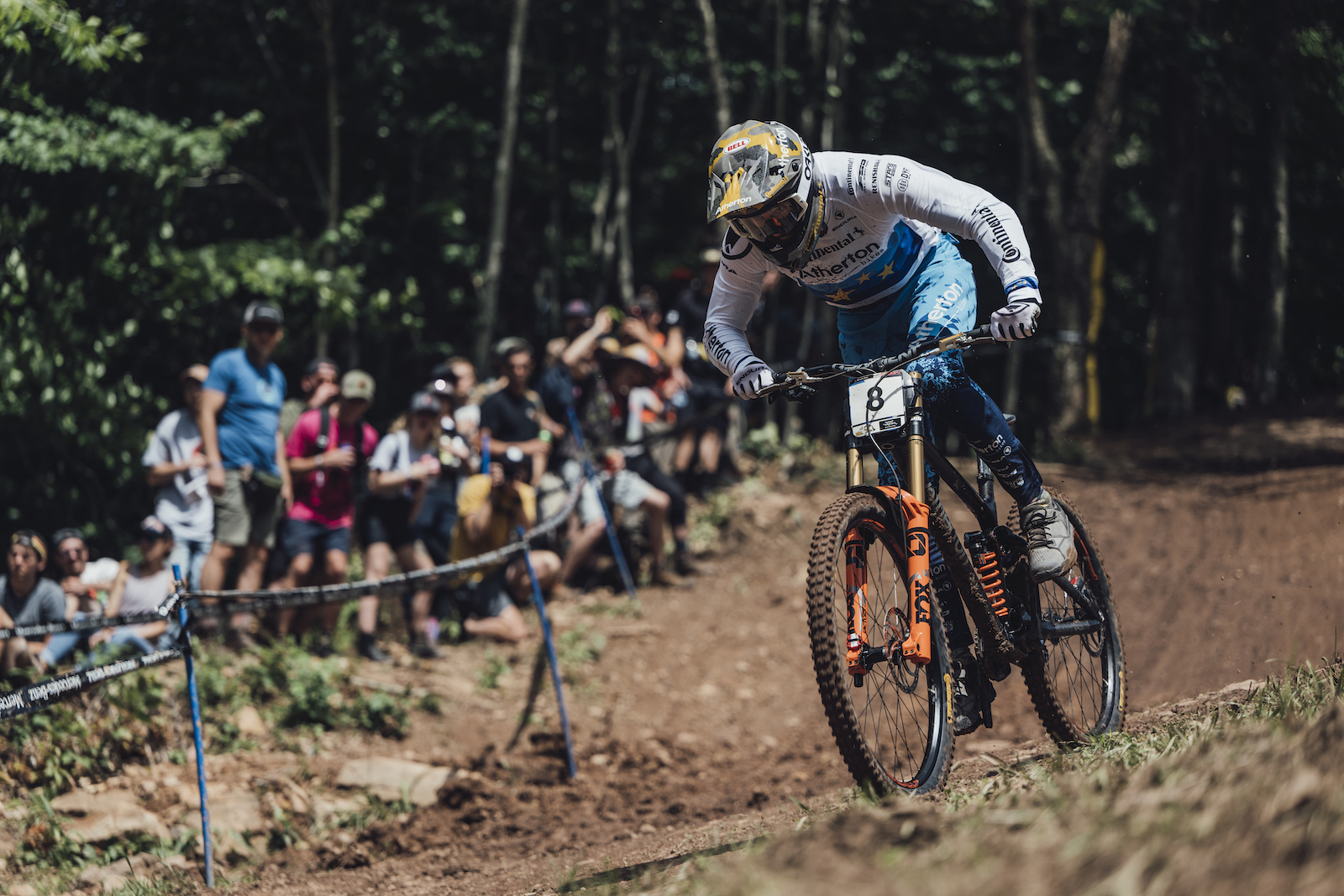 Fourth place for the young Irish athlete Ronan Dunne, who was really fired up in a run practically without flaws – the real outsider of this race, third yesterday in qualifying. 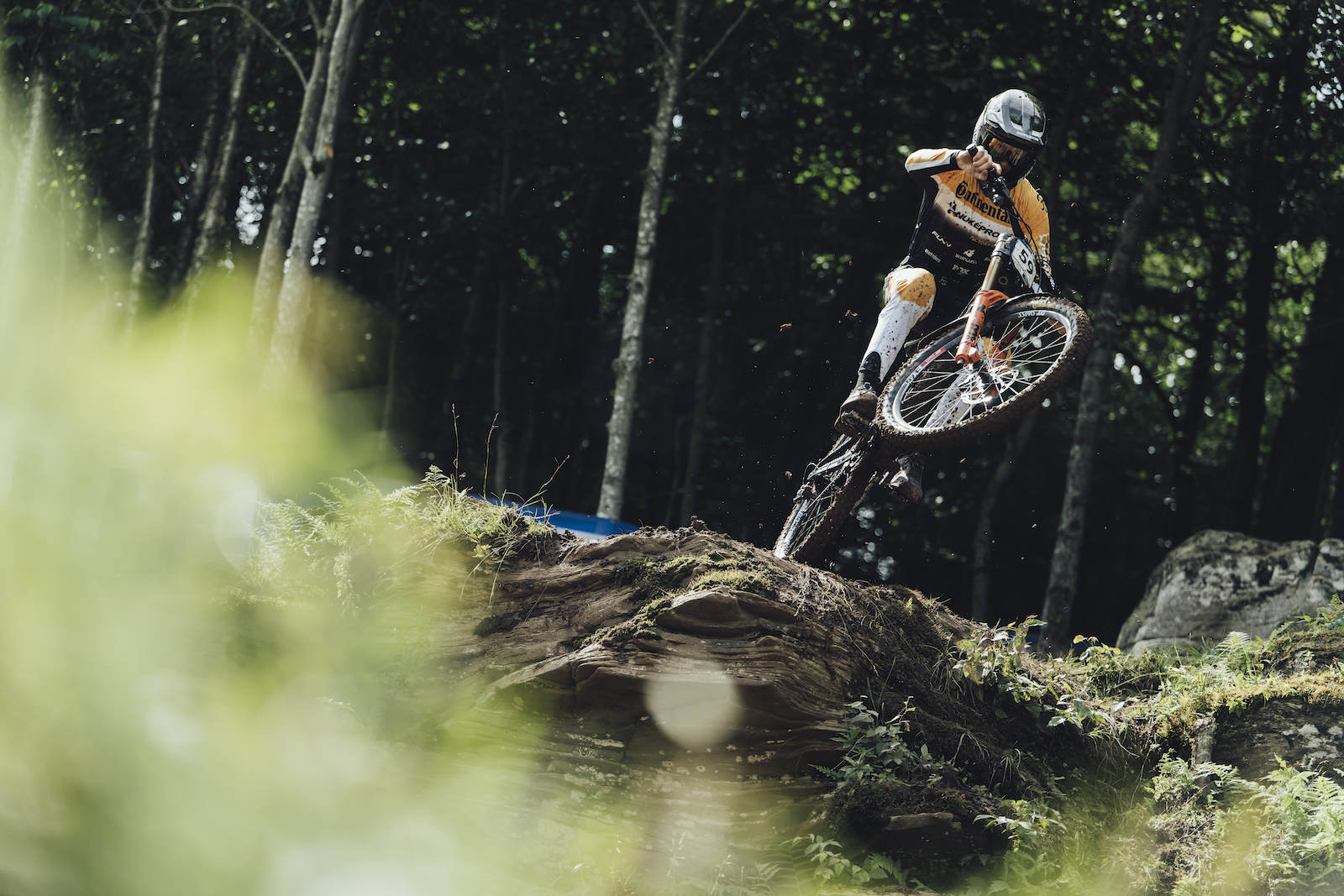 Fifth position for the unstoppable Greg Minnaar who used all his experience and his proverbial precision to ring yet another podium in his career, in a crescendo run, which saw him face the last rock garden and all the part end of the track with unmatched speed and precision. 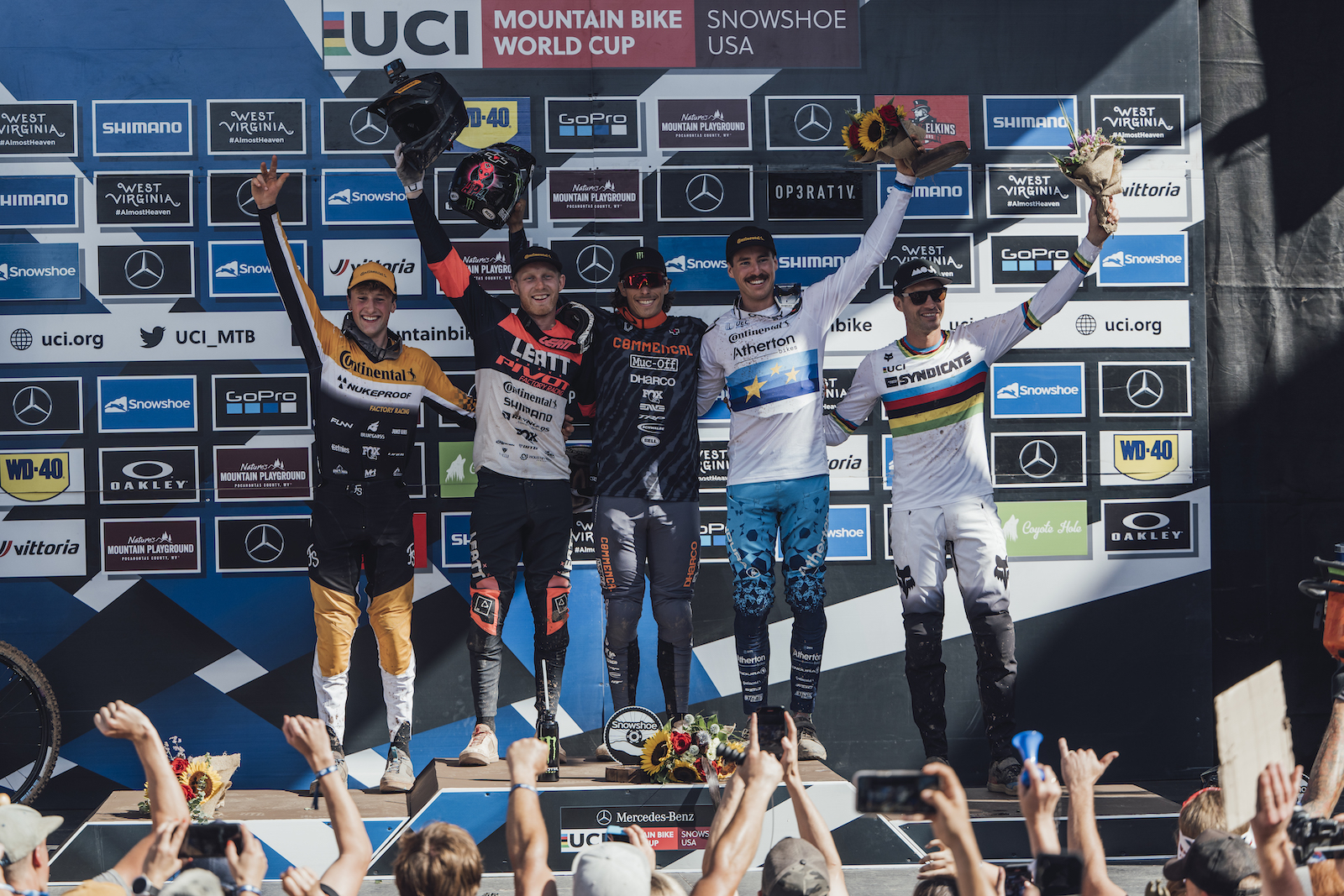 Congratulations to Loris Vergier, winner of the previous round in Vallnord, who, despite a crash, finished in eighth place. Aaron Gwin landed in 14th as the fastest American on home turf. 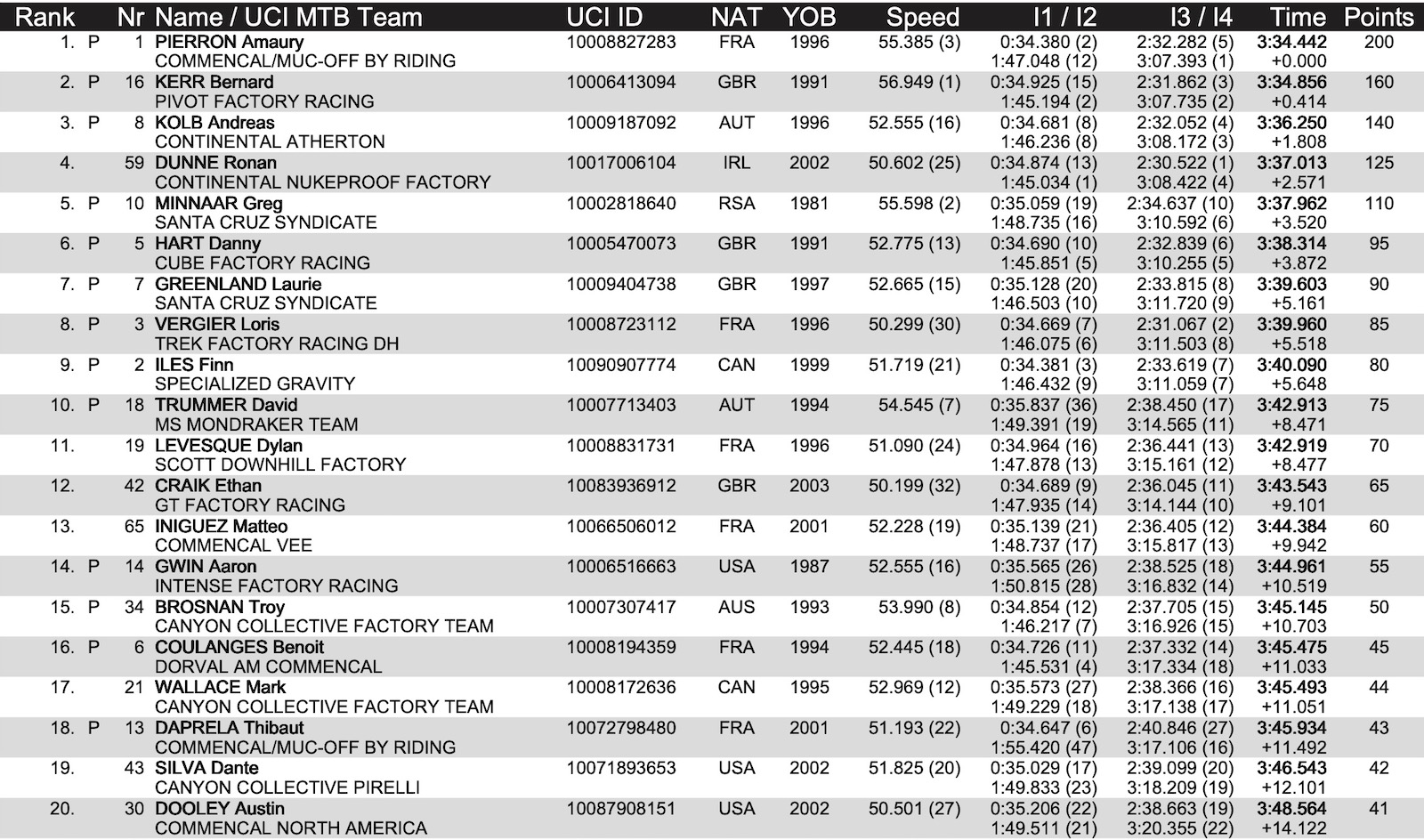 The conditions of the track – which were still drying at the start – were actually prohibitive during the race runs in the female category and visibly and understandably put the athletes in a difficult spot. However, Camille Balanche did not disappoint and we can now consider the queen of the mud. 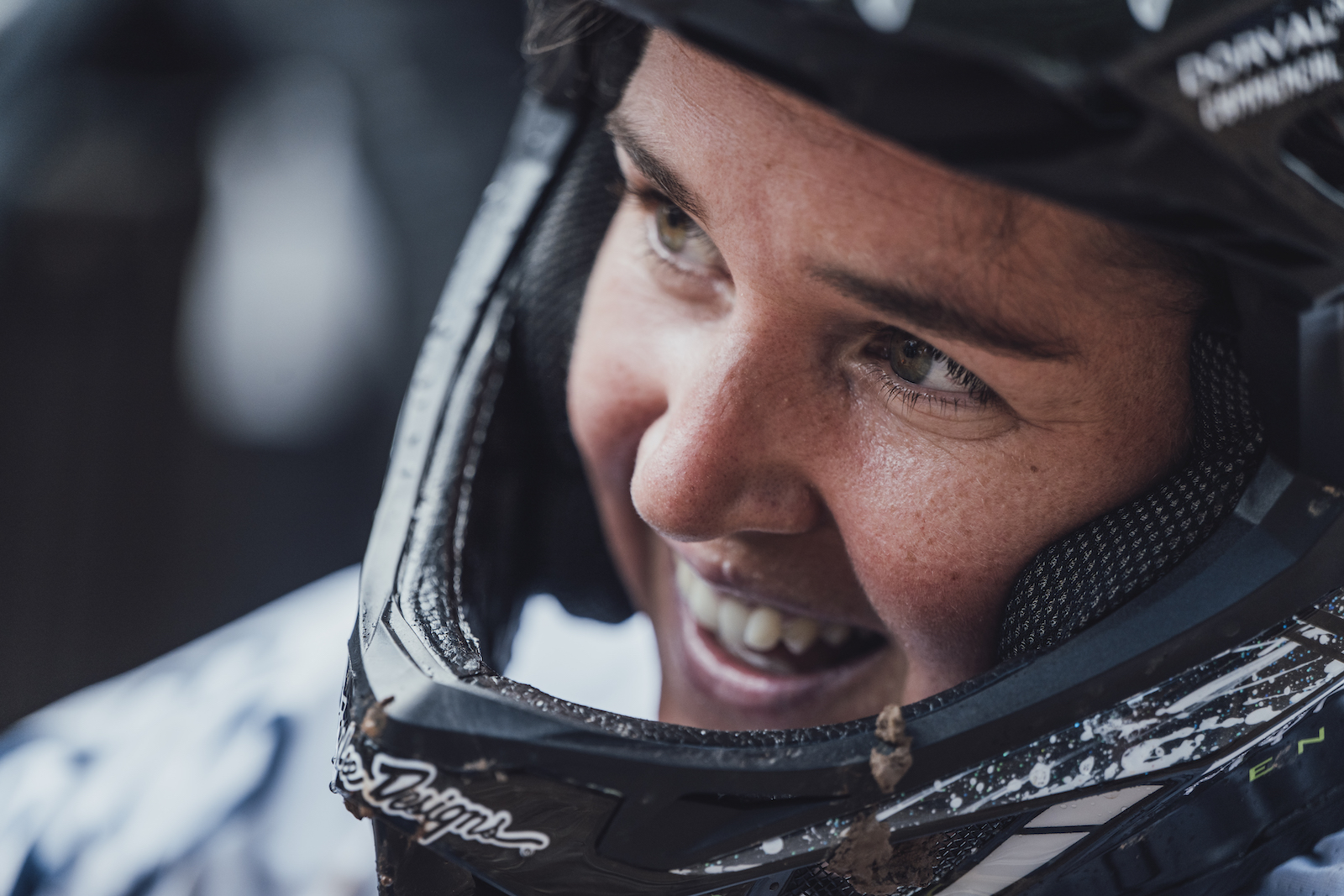 With her ability to carefully manage the sections of the track where you must let go of the brakes and those where you ride conservatively, she scored a victory that reinforces her lead in the overall standings. 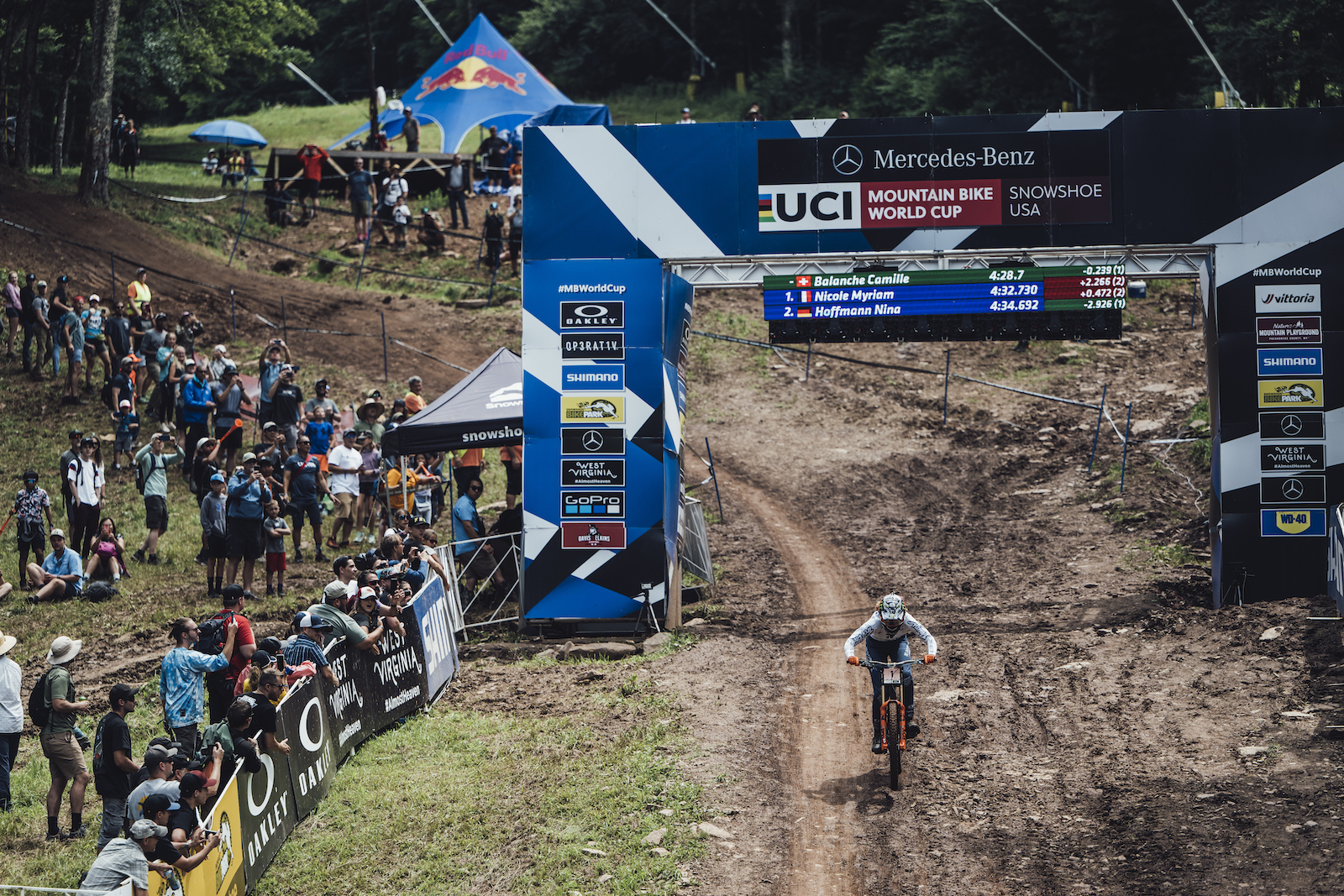 Myriam Nicole, on the other hand, did not hold back and, despite a fall and another costly mistake, still took second place. Nina Hoffmann attacked the track, especially in the more flowy sections, but she did not tackle the technical sections in the best possible way. An excellent third position for her, with a wide gap on her pursuers. 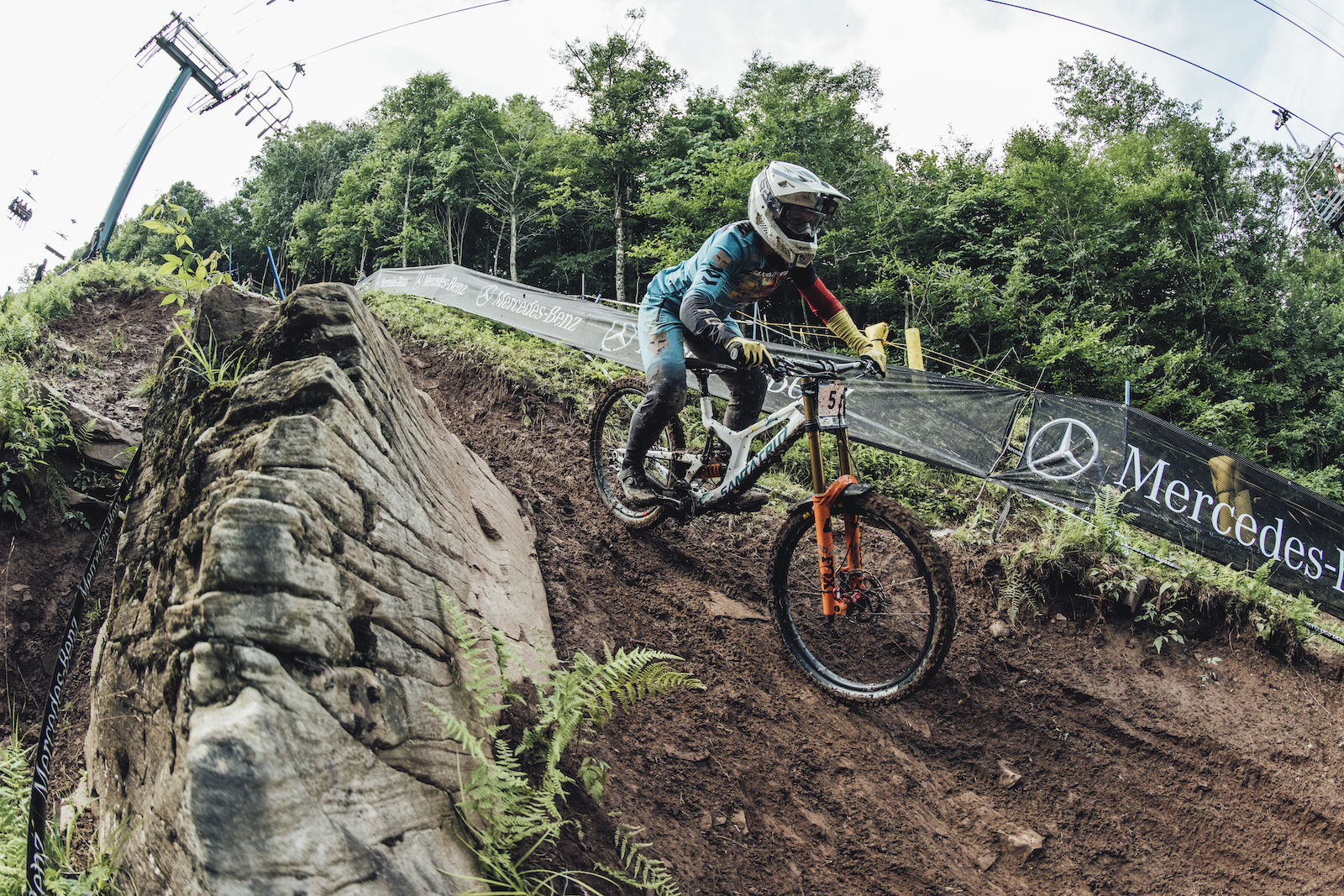 Valentina Höll, winner of Vallnord round 5, closed out in fourth position with a run devoid of crashes, but inconsistent in pace, fast in some parts and off beat in others. Fifth place for Monika Hrastnik. 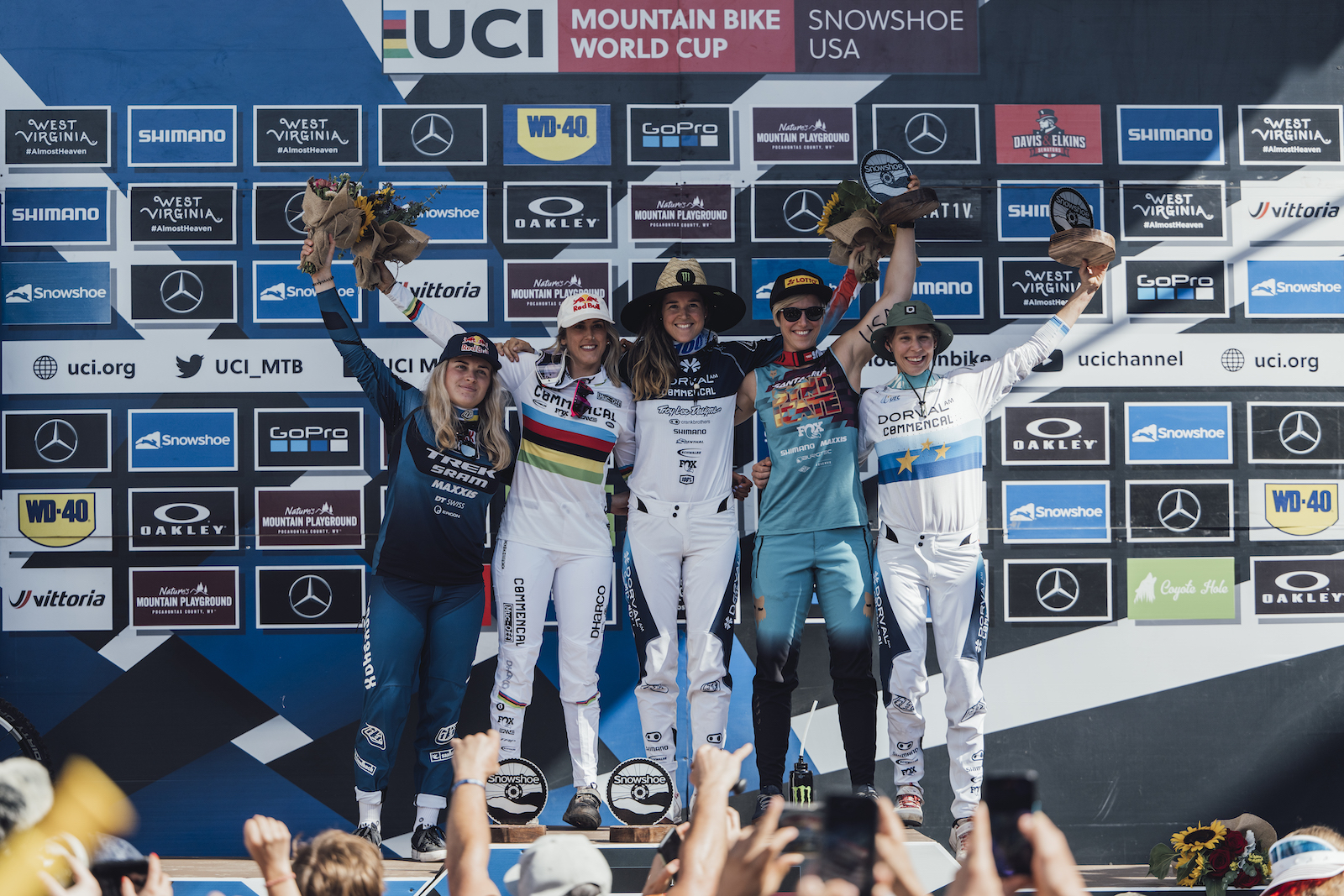 Anna Newkirk was the fastest American on home soil, landing in 9th place.

It was Canadian dominance in both Junior categories where both Jackson Goldston and Gracey Hemstreet won the US race, each consolidating their leadership in the overall.

The next round of the 2022 UCI DH World Cup season will take place next week in the historic location of Mont-Sainte-Anne, Canada.