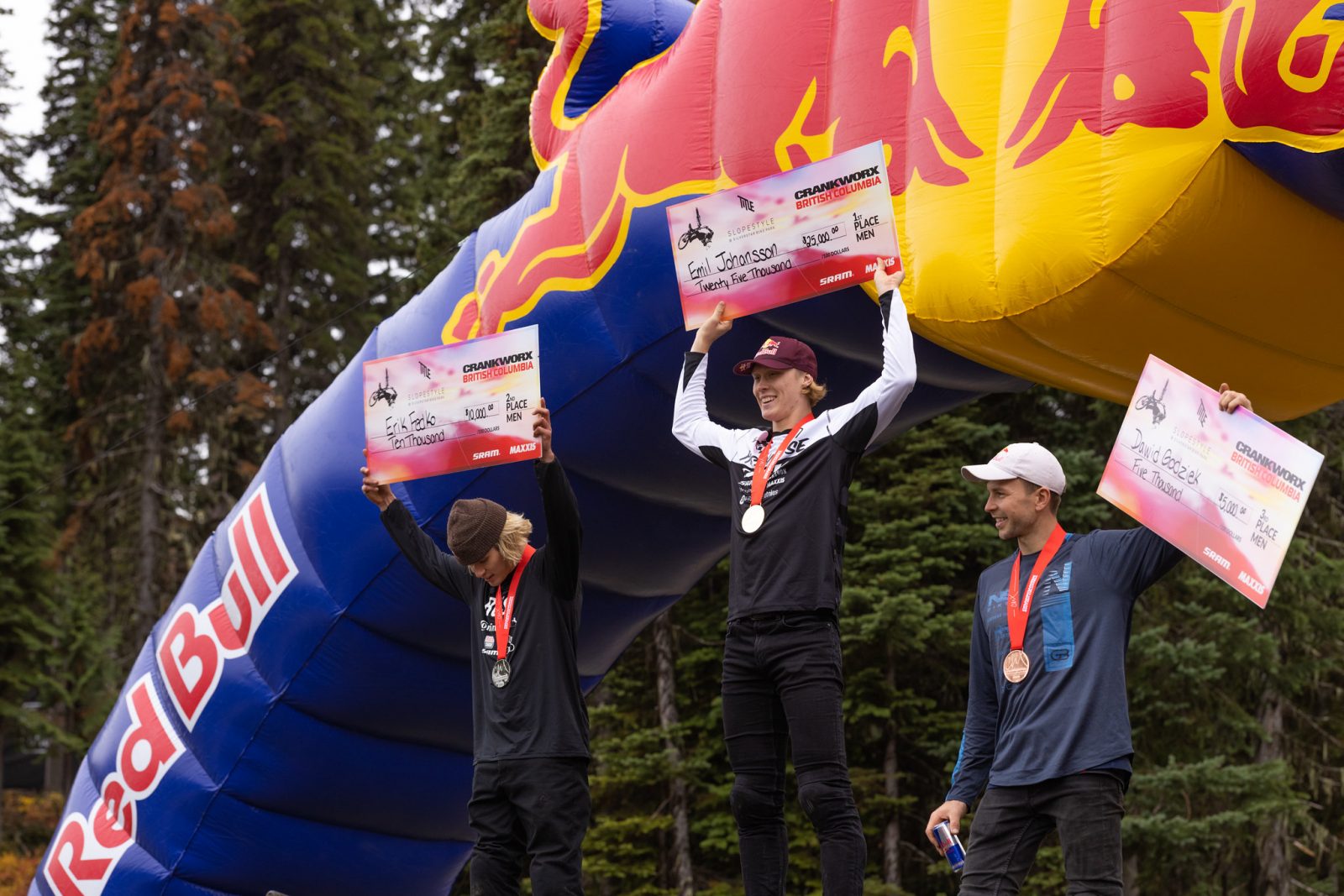 “It felt amazing to pull that run off and to get some of the tricks in which I had never been able to do in a contest run before,” said the Swede, who pulled off three first-ever tricks in a comp: a switch truck to down whip off a step down, a switch three dub whip, and a truck to double down whip.

Of the latter he said: “I didn’t do it in practice. I’ve never done it to dirt before. So this was the first time I’ve ever done it to dirt, so I thought it was the right time to bring it out. I was a bit nervous about it. Tried to talk myself out of it, but I ended up doing it and I made it happen, so it feels good…You can’t take that for granted. To be able to pull it off when it really matters is tricky, and to do it and get all the way down the hill feels amazing.”

The 22-year-old’s first run scored at 95, a score that held through the second runs.

The arena in which Johansson claimed his victory was an all-new course to the Crankworx World Tour circuit. Designed by Slopestyle legend Brett Rheeder, whose home mountain is SilverStar, and built by famed rider, dirt shaper and innovator Matt MacDuff, the course garnered rave reviews from the discipline’s top riders.

“I think the course is absolutely amazing,” said Johansson. “It has a bit of everything. Really playful, fun to ride. It’s still big enough to be gnarly, but it’s definitely different compared to something at The Boneyard in Whistler.” 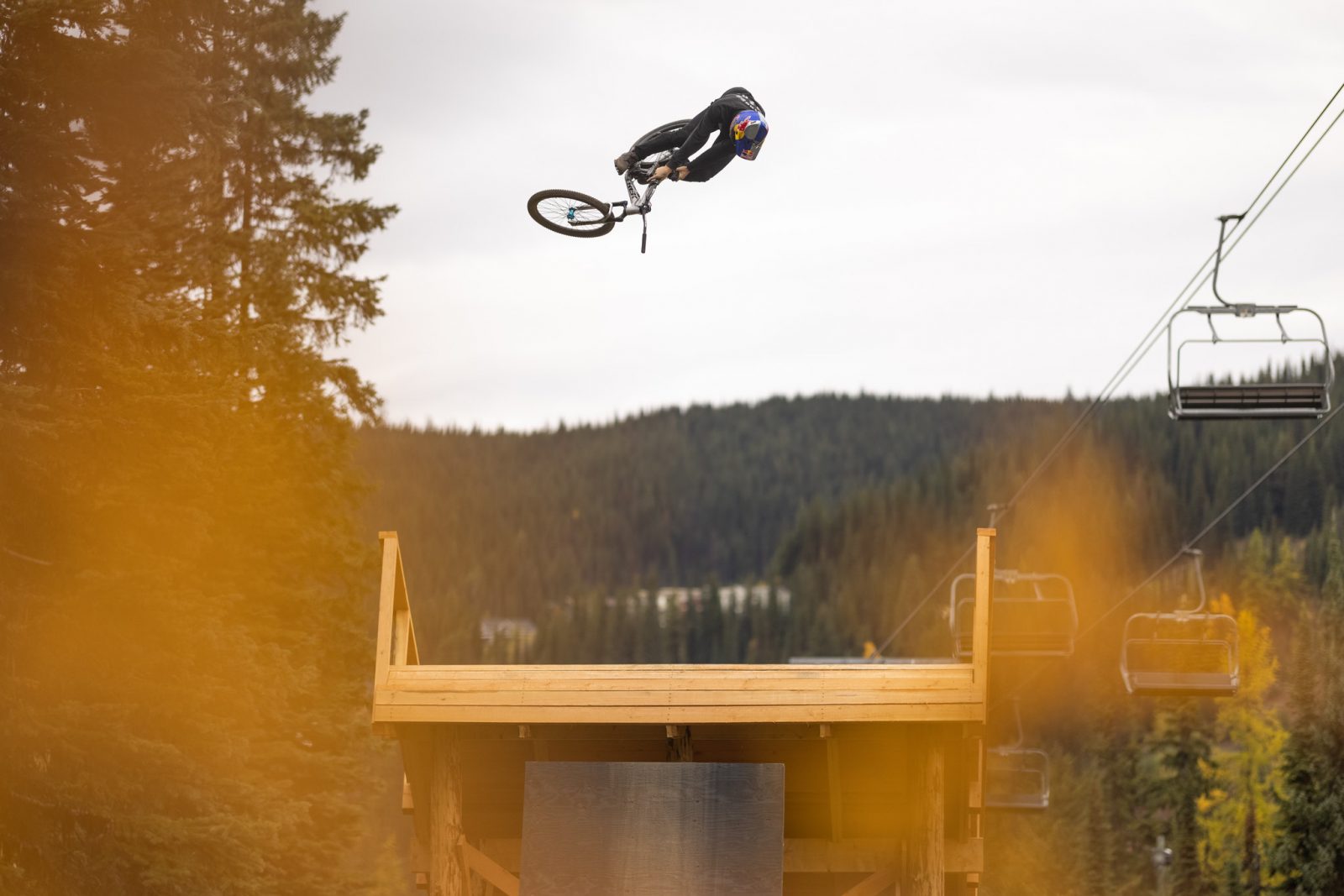 “It was super nice,” echoed his Red Bull teammate David Godziek. “The features were on point…It was probably the best course I’ve ever ridden at Crankworx.”

“This course wasn’t designed to have the biggest, gnarliest features,” Rheeder had explained during construction. “It was designed to have features more similar in size to what riders actually practice on at home. Features that allow the rider to focus on their runs, rather than the course itself.”

“I’m feeling so good right now,” said the day’s runner-up, Erik Fedko. “Stoked to be back on the Crankworx podium. I worked really hard and it paid off. I was stoked that I actually landed the run because I wasn’t feeling that good in practice the last days. It was pretty wet and pretty soft. The course was slow. But everyone was working so hard, and the level of riding was insane. I did not expect that because almost everyone was struggling with the speed. So yeah, I’m just hyped. Stoked to be back.”

The challenging conditions came from a mix of rainy days with temperatures that occasionally dipped below freezing. Despite the challenge, like Johansson, the German rider pulled off a trick in competition that was a first for him.

“The 360 windshield wiper,” he said, all smiles in the finish corral. “I did it first time to dirt yesterday, and then today first time in a comp. So I was hyped. It worked out well.”

Fedko’s 91.66 slotted him into second place after the first runs.

With a number of crashes in the second runs, the top three of Johansson, Fedko and Godziek from the first remained unchanged. All that remained to be seen was whether there would be shuffle at the top.

“My first run was the safe run, which I was super stoked on, because the course was super long and it was super nice to make it down to the bottom,” said Godziek, who had scored an 89 in Run 1. “I wanted to improve in the second one, but I did a little mistake. Still super stoked being on the podium.”

With only Johansson after him, Fedko had a choice.

“I saw David crash and I was like, ‘Hmm, should I try to improve my run or should I just chill?’ I decided to just take it easy because I already took so much risk here. I don’t want to risk it or to crash or hurt myself. And it was pretty much the best run I ever did in my life, so I was stoked. I just said to Emil ‘Dude, congrats. I’ll just take it easy. If you want we can do a train.’ And he was like ‘Yeah, for sure.’”

The two dropped in one after the other, locking in the podium order and wrapping the competition on a note that speaks to the comradery that exists among this tight-knit group of riders. 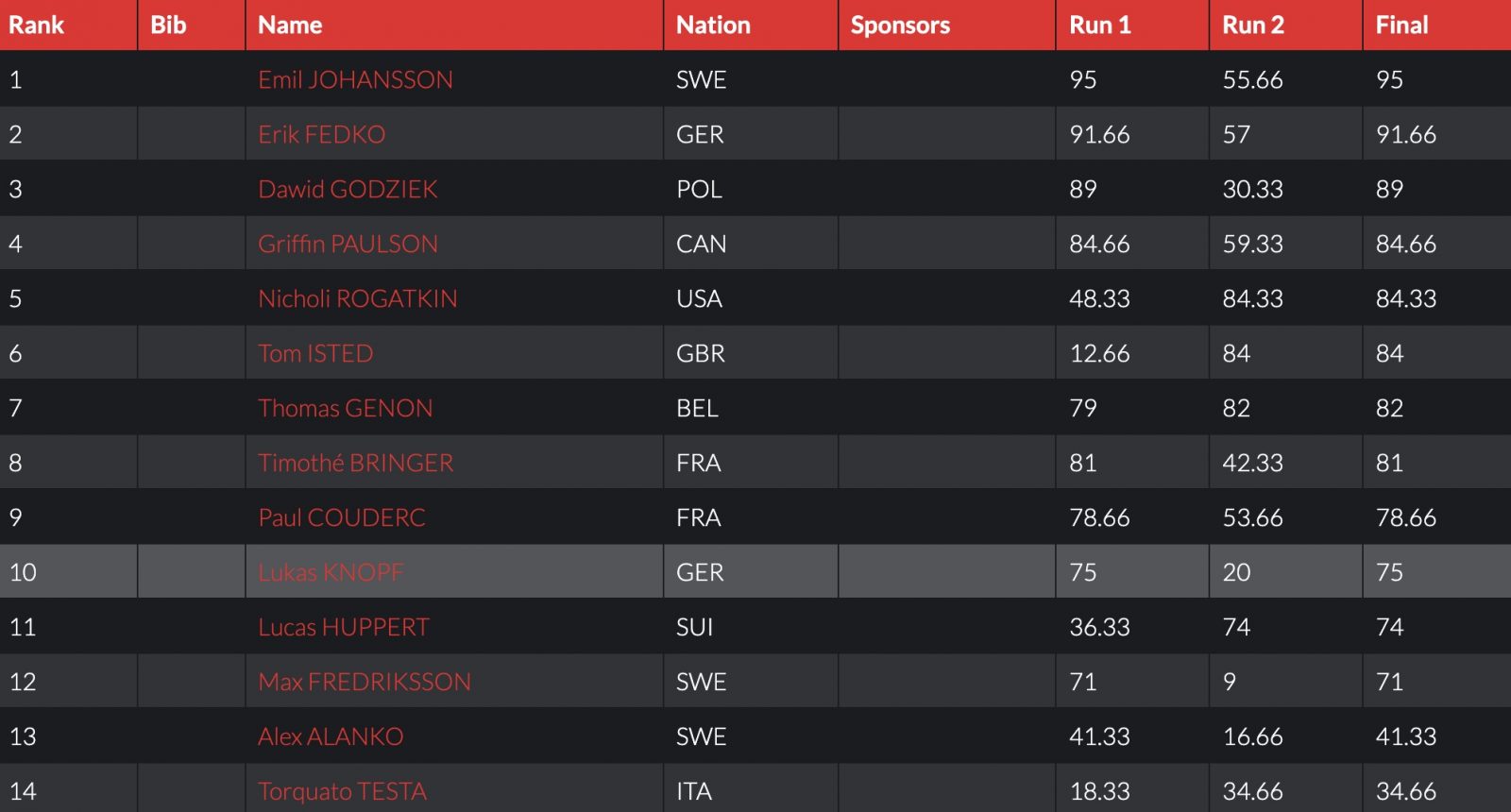 Finishing just off the podium, a competitor whose fourth place felt like a win for those watching.

The lone Canadian in the bunch, Griffin Paulson dropped in first, kicking off the competition with a seemingly flawless run – impressive for the first rider, made moreso by the fact that this was Paulson’s first Crankworx performance.

“That’s the main thing when you do a Crankworx, especially the first one: make it to the bottom,” said Paulson, who did more than just make it. He scored an 84.66. “You don’t want to go and crash your first run, then pressure is on for the second one. You know you’re on the biggest stage. You want to show that you have those skills and whatnot, but yeah. This course worked for me. I’m super comfortable on the bigger stuff, that’s what I build in my compound. It seems to be the Canadian Slopestyle vibe, the big wide open jumps with high speed, so I felt right at home on the course.”

Despite the rookie’s success on Run 1, as he dropped into Run 2, it was clear from his riding he was hungry for more. Paulson had his sights set on the three podium spots, occupied by three of the best slopestyle mountain bike athletes in the world.

“There was a brief moment when I was debating whether I should just drop in and play it safe,” he explained. “I’m going to New Zealand and I have to leave in just 10 days. But, you know, when the opportunity is right in front of you, and I was feeling good on the bike and feeling good on the course, you gotta go for it. I went for it.”

A spill on his run dashed his podium dreams (“I came out fine, scraped my elbow and that’s it!”) but did nothing to shake his resolve as he looks to next month’s season-wrapping competition in Rotorua, New Zealand. 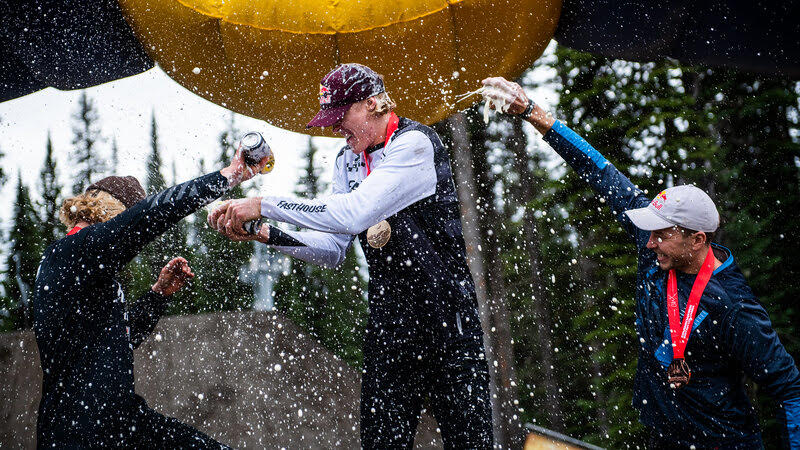 “It is pretty strategic,” he said of his mindset heading into Crankworx Rotorua. “For one, it’s damn near impossible to get into a Crankworx. It was my main goal. It took me 10 years to get in here. It’s only the top 14 riders in the world and it’s super hard. For me to get this placing is really good, and if I can go do a similar type of thing in New Zealand, hopefully land that second dream run, then I’ll be sitting really good for 2022. I’ll be in the whole World Tour.”

Paulson is surely not the only Slope rider thinking carefully about what’s riding on the next contest. Though one rider says he’s trying not to think about it.

If Johansson takes the next win, not only will it make it six in a row, but it will be a full sweep of the 2021 Crankworx World Tour season. The accomplishment would make him the second rider ever to win the Triple Crown of Slopestyle, a distinction that brings with it a $25,000 bonus paycheque.

“I’m just going to try my best, as always, and see where it takes me,” said Johansson, in a neutral tone. “You can’t really do anything else.”