[Press release] As mountain bike season kicks off, the enduro mountain bike racing community is headed south, massing in Chile for the first round of the 2014 Enduro World Series this weekend, April 19-20.

Against the backdrop and thin air of the Nevados de Chillan volcano, the Santa Cruz Montenbaik Enduro by MTBLab 2014 course will drop from the steaming vents and high altitude of the volcanic cone around Chile’s Nevados de Chillan Bike Park to the densely forested valley floor.

Host organisation, Montenbaik Enduro have spearheaded the growth of enduro in South America over the past 6 years. Media Director Eduardo de Solminihac is confident that that experience will ensure “that our staff and our Montenbaiker community will give riders and media from all over the world the best experience this weekend. We are very excited to have a MTB world series in Chile for the first time, and to show our best trails.”

In response to feedback and learnings acquired over the Enduro World Series’ debut season, EMBA released an updated Rule Book on April 8, (available for download on http://www.enduroworldseries.com/rules.php.) “Everyone’s constructive feedback has been incredibly valuable to us and we hope that these alterations continue to define and develop enduro mountain bike racing into the future,” said Enduro World Series Managing Director, Chris Ball, of the release. Highlights include new measures to ensure the environmental impact of the Series is mitigated, by banning goggle tear-offs and food-caching. 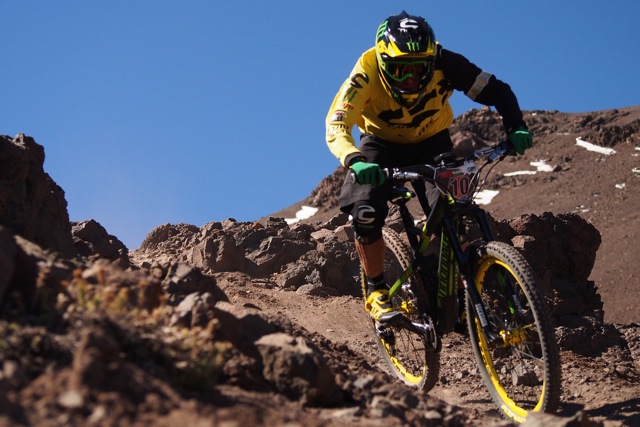 The six stage race will see a combination of chairlift riding, uphill walking and approximately 1000m of climbing each day with winning GC (overall) times expected to be within the 40-45 minute range. Stage maps have been released at http://montenbaik.com/2014/04/horarios-circuitos-y-reglamento-enduro-world-series-en-nevados-de-chillan-2014/

With seven great locations, a cast of champions and Dirt TV highlights providing amped-up coverage under the leadership of Richard (@LordCunny) Cunynghame, the stage is set for an awesome season, says Managing Director Chris Ball.

“Still buzzing from our inaugural year last year, we head into Round One 2014 in the epic Nevados de Chillan, Chile. The team at Montenbaik have done an incredible job building enduro racing in Chile over the last six years and the riding community in this country is just incredible. I can’t think of a better location or better team to kick start the second year of the Enduro World Series with. With some news rules and a tighter points structure, the next seven months are going to see some jaw dropping enduro racing and we can’t wait to see what unfolds”.