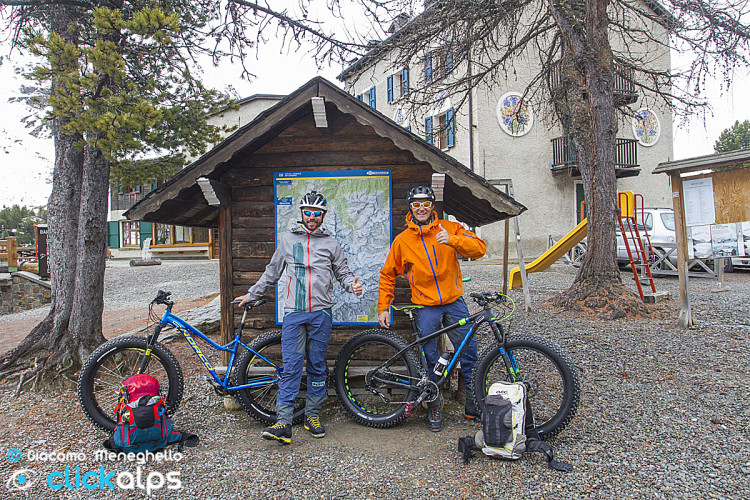 Just a little more than a week has passed but the sense of thrill is still strong! Taking the “fat tires” to the top of one of the mountains, symbol of the Alpine range, was a challenge we had dreamt about for a long time, and also the first time that anyone had attempted to do it during the winter season. 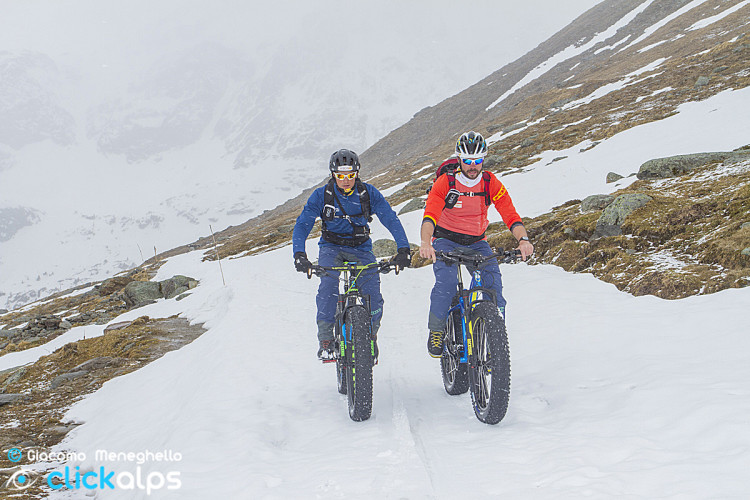 After some qualms about the weather forecast, we took the decision however to attempt it the 28th and 29thApril, also at the risk of finding adverse conditions. The first day in fact, on departure, it all seemed anything but positive: after leaving our transport at the “Rifugio dei Forni” mountain lodge (2200 m), a light rain promised anything but good weather.po. 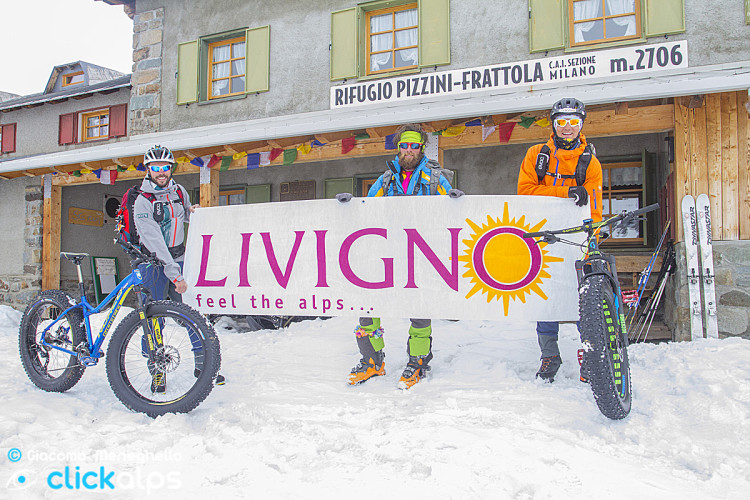 Accompanied by our photographer Giacomo Meneghello with his mountaineering skis, we reach the “Rifugio Pizzini” (2706 m) cycling the entire stretch, half on a dirt track and half on the snow. Greatly restored with a wonderful plate of pasta (thanks to the owner Claudio for offering it to us!), we started out again heading for the “Rifugio Casati”. 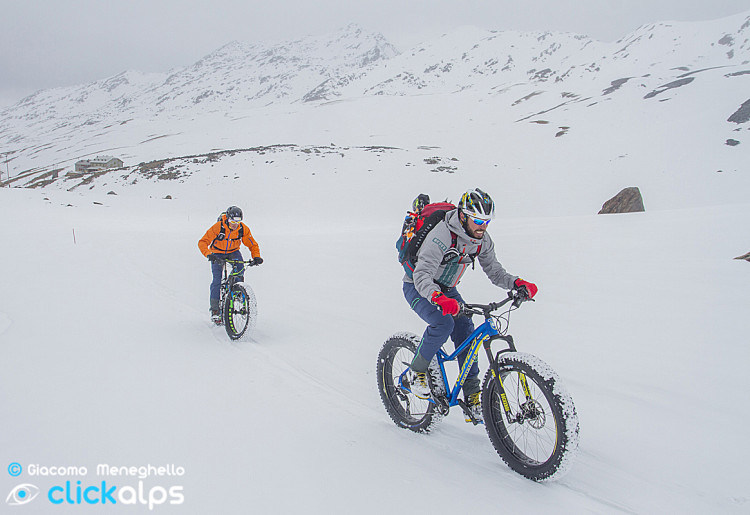 Here things started to become really tough! We had to climb on foot along a trail used by mountaineering skiers through valleys and gorges, without the help of snow shoes, which would probably have been useful! With more than a little difficulty (in a blizzard, non the less!) we managed to reach the “Rifugio Casati”(3269 m), climbing the last part over the rocks of the summer trail. 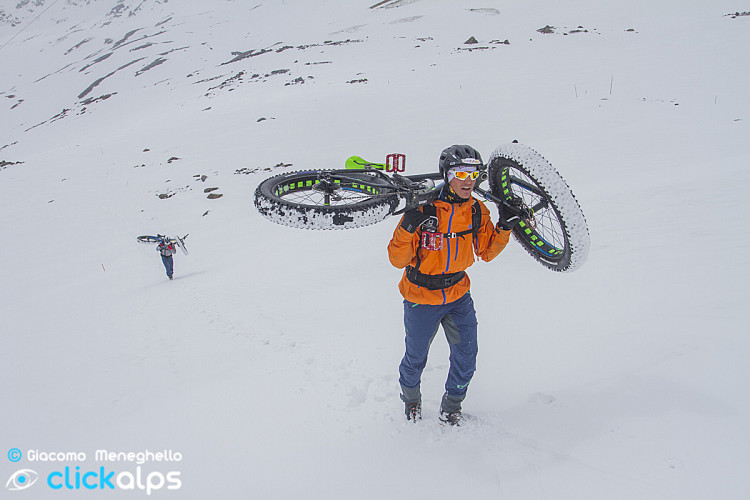 On arrival at our destination, a well-earned rest preceded our dinner, where the Alpine guide Giuseppe Bianchetti, joined us, who in the meantime had arrived with his skis, to accompany us the next day, even if at that moment the expectations for a nice sunny day were anything but on our side. 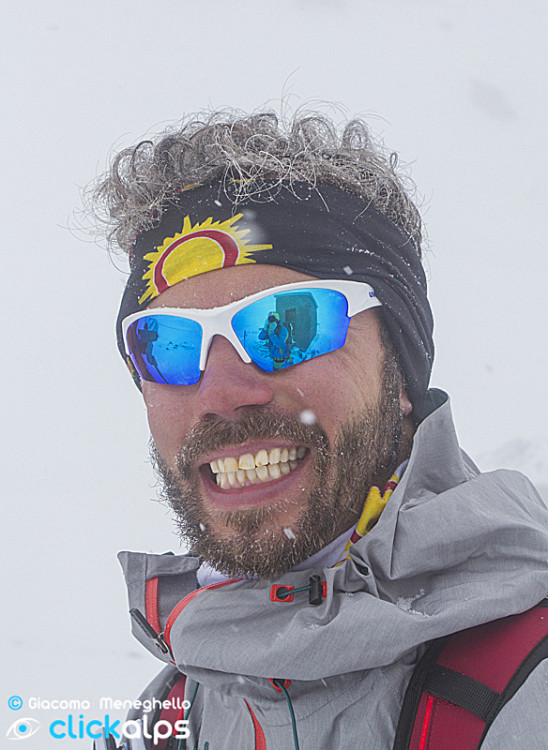 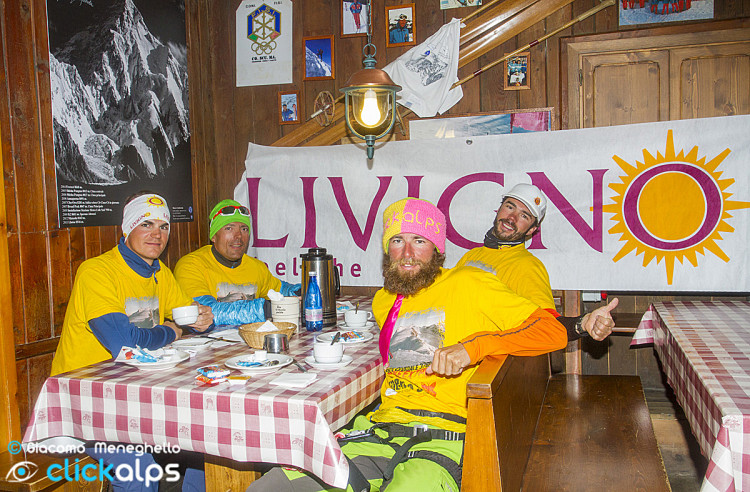 The following day Giacomo got up before dawn (at 3 am!) to check the weather conditions and to take some spectacular photos of the starry sky outside the lodge. Good fortune finally seemed to be on our side! 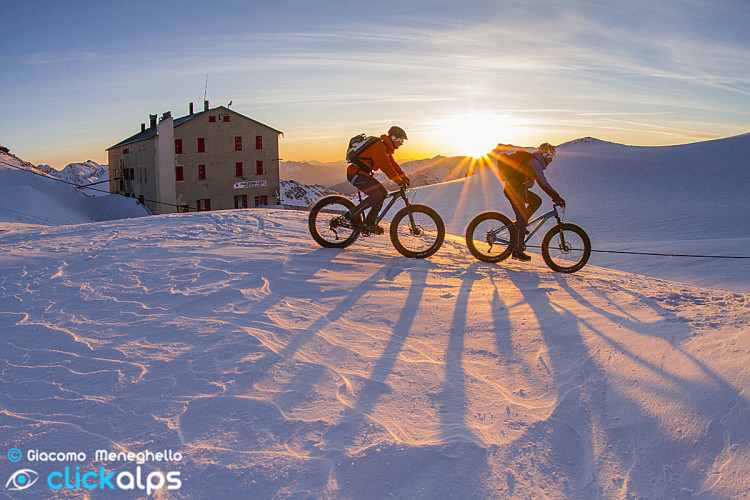 That which awaited us outside, with the colours of dawn, was a magnificent spectacle to say the least (we also deserved it after all!). Some customary photos of “Gran Zebrù” tinted with orange as a backdrop and off we went again, heading for the summit! Giuseppe had warned us about the possibility of finding some snow drifts during the climb up the glacier: in fact, what should have been a cycle ride on hard snow and ice, turned out to be a roped party carrying the bikes (the crevasses were hidden by the snow!). 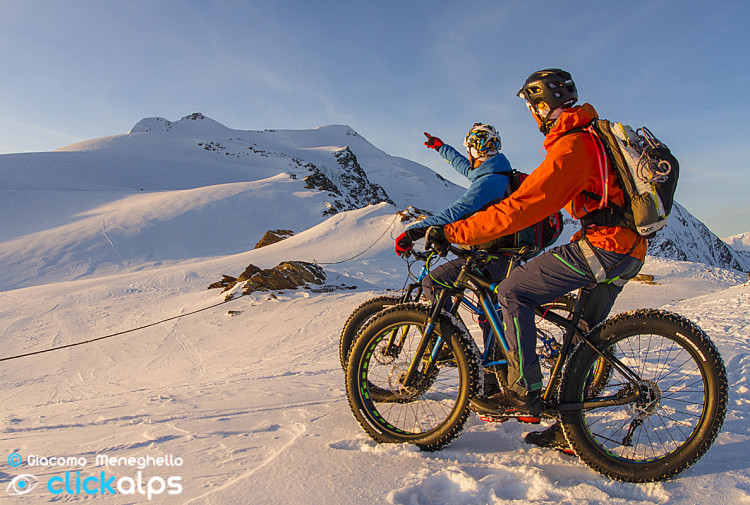 On reaching the bergschrund, after using crampons, we continued straight ahead towards the summit (perhaps the most demanding part of the entire adventure!), finally reaching the peak (3769 m) in the company of a group of English skiers who encouraged us with a sign of “respect”! 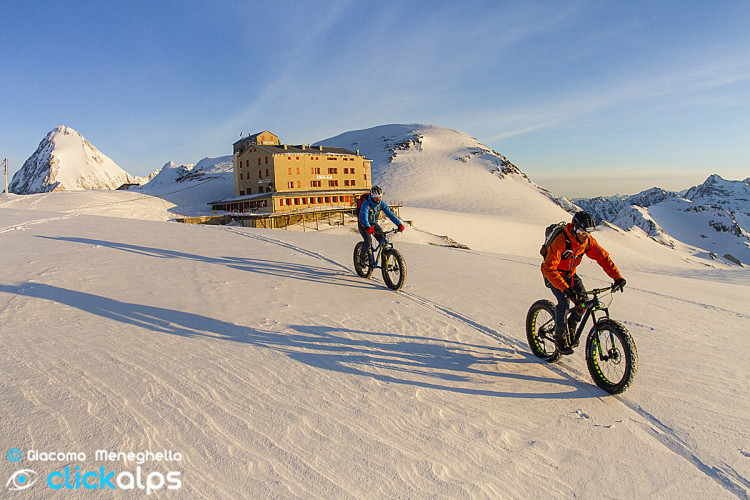 An energy bar as hard as ice (though at the moment it seemed like the most succulent piece of fillet ever eaten!), a few customary photos on the conquered summit and off again, ready for a shot of adrenaline! The descent from the top end of the glacier was pure exhilaration, while trying to maintain maximum speed, bunny-hopping now and again over the snowdrifts. Back once more at the “Rifugio Casati”, a well-deserved thanks to the owner Stefano for the excellent service, and then down along the gorges which we climbed just the day before, maybe the most exciting part of the descent (we were intoxicated by the thrill of it all, surfing the powder with our fatbikes!). On arrival once more at the “Rifugio Pizzini”, a quick farewell to Claudio and then down to the “Rifugio Forni” for a well-deserved lunch and to celebrate the success of our venture! A big thanks to the owners of the Mountain Lodges “Casati” and “Pizzini” for their hospitality, to our Alpine guide Giuseppe Bianchetti for his competence in accompanying us, to the photographer Giacomo Meneghello for his wonderful photos and to all our partners who supported us in our venture.