Just like the last few years, Lapierre recently presented the latest addition to their 2016 range in beautiful Portes du Soleil. This year, with three days of full sun and summer temperatures, we had the chance to try the French companies newest offerings for 2016.

One of the flagships for the French brand – the Zesty was completely rebuilt and redesigned for 2016 . 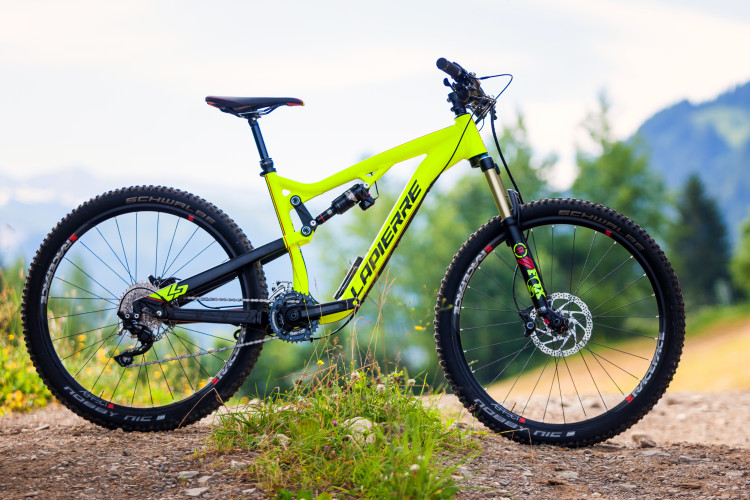 The frame geometry has been revised, with more relaxed angles and a shorter rear end to improve handling.

The frame is now cleaner, more linear and has Lapierre has changed how the rear shock attaches. Not the linkage pivots on the top tube, this makes more room for a water bottle and also saves weight. Even the attachment on the rear link has changed: now the shock is attached directly, without any link. This allows you to use a shorter and thus lighter damper.

The layout of OST + suspension has been revised: the compression curve is more progressive at the end of it’s travel, giving the bike a feeling of greater range in its travel. The kinematics have been optimized for a 1 × 11 and 2 X 11 drivetrain improving efficiency in pedaling 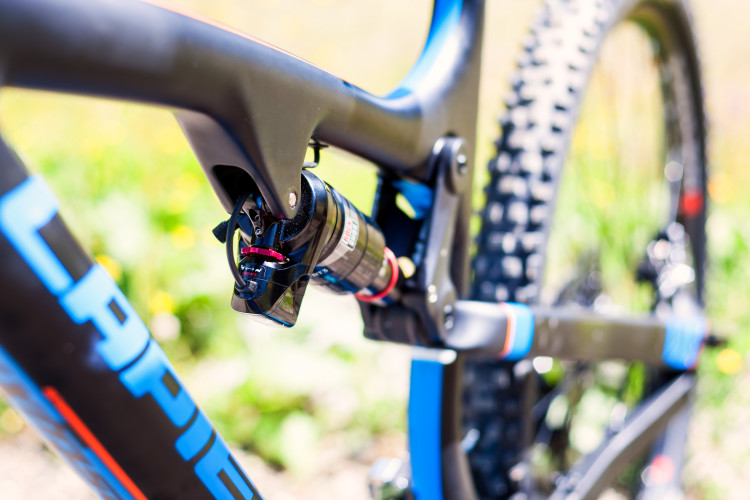 The carbon frame has been dramatically lightened – now 500g lighter. Not only was weight reduced by eliminating the link that drove the shock, but Lapierre have used titanium screws for pivots, a costly but unique solution that very few manufacturers adopt. The secret, however, of this weight saving is to be found in the new positioning of the shock absorber with regards to the top tube: focusing tension in a small portion of the front triangle, it was possible to remove a lot of material, especially on the carbon frame models. Total saving in terms of weight : -50g aluminum, carbon -500g. 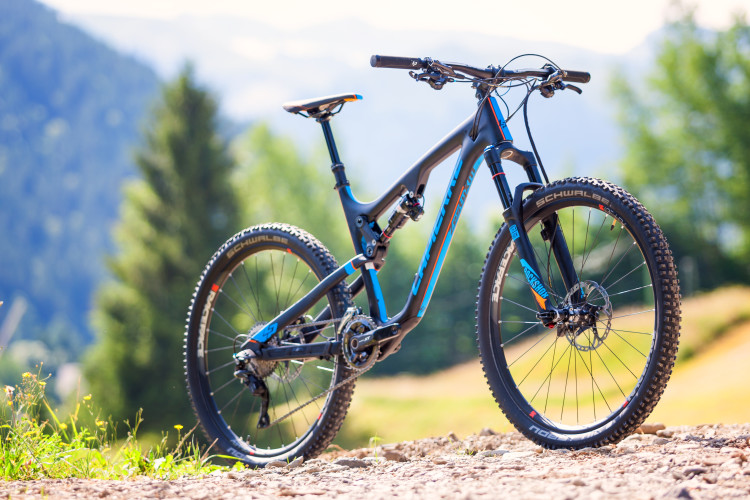 This year Lapierre decided to abandon the 29″, pointing to 27.5″ wheels as the way to go. It is a bold and controversial move, but following the market demands, more and more riders want 27.5″ as it’s ideal for hiking in the mountains and offers greater maneuverability.

The clearance for the rear tire has been increased by 10mm, while the chainstays have been shortened to 430mm. The head tube angle is now 67 degrees and the reach has also been elongated, following the trends…

Four models will be available, two carbon and two in aluminum, with a Women’s specific version as well. 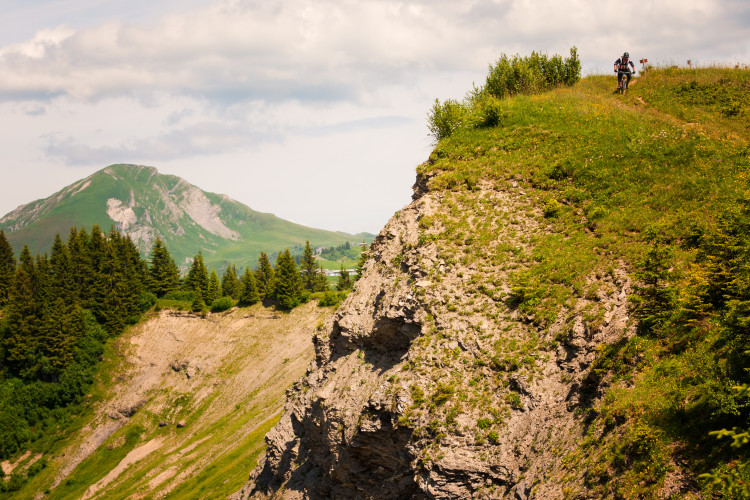 Because the bike park at Morzine is not the best place to try a trail bike, we have to thank our local guides who took us on a series of trails nearby that were perfect for this type of bike.

The first impression you get of Zesty XM is its pedaling efficiency. We can’t say 100% if it’s due to the kinematics, the light weight or the geometry, but overall because of the sum of its part, the Zesty XM is a real missile uphill!

The riding position is just right, not too uptight and not too relaxed either, perfect for a trail bike.

What was surprising is the bike excellent stability, both on steeps and in the fast bits. With the new geometry set, the bike is longer and give you a sense of security even in situations that typically have a trail bike feeling skittery. We shouldn’t exaggerate however, because we are talking about a 120mm bike here, but the Zesty XM is surprisingly fun and confidence inspiring. 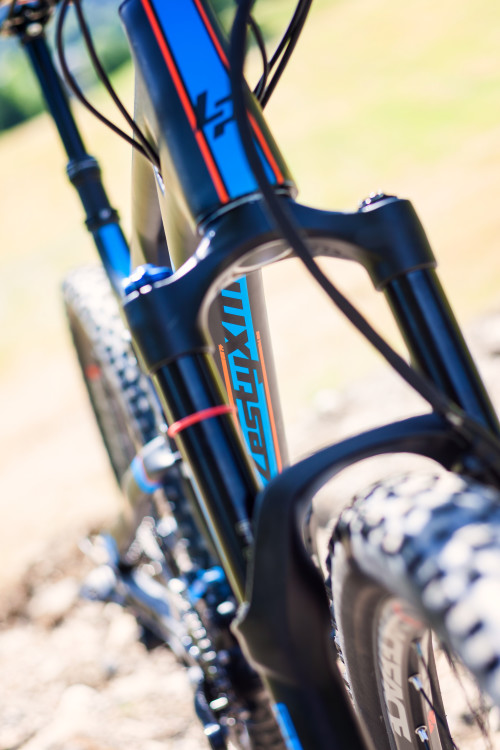 The only limit of the bike is perhaps the Revelation, a fork with 32mm stachions. Compared to a Pike, you lose a little bit in terms of rigidity and steering accuracy (and also of the initial softness and absorbency of small bumps), but let’s not forget: we are talking about a trail bike with 120mm and therefore the spec’ing a Revelation is absolutely spot on. Perhaps we’re just jaded a bit.

Zesty AM: The new all mountain 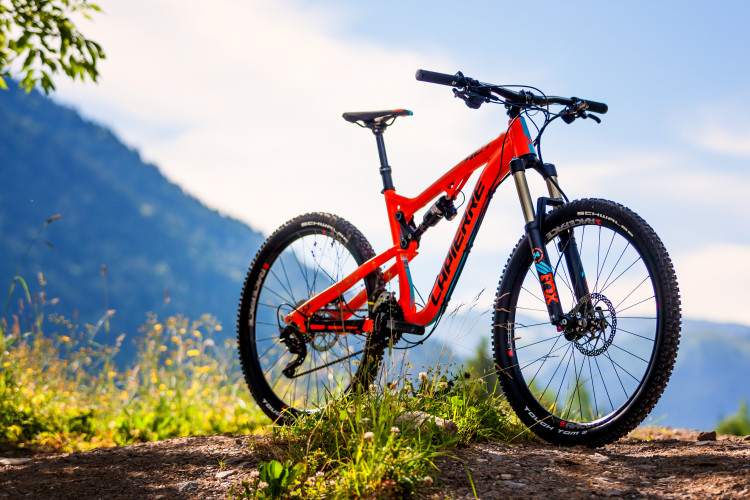 Until last year the difference between the Zesty 27.5″ and the Spicy was exclusively in settings, this year Lapierre wanted to clearly differentiate the two models with a completely different chassis.

The Zesty AM is designed precisely for all mountain, with 150mm of front and rear travel and a beautiful, lightweight frame assembly. 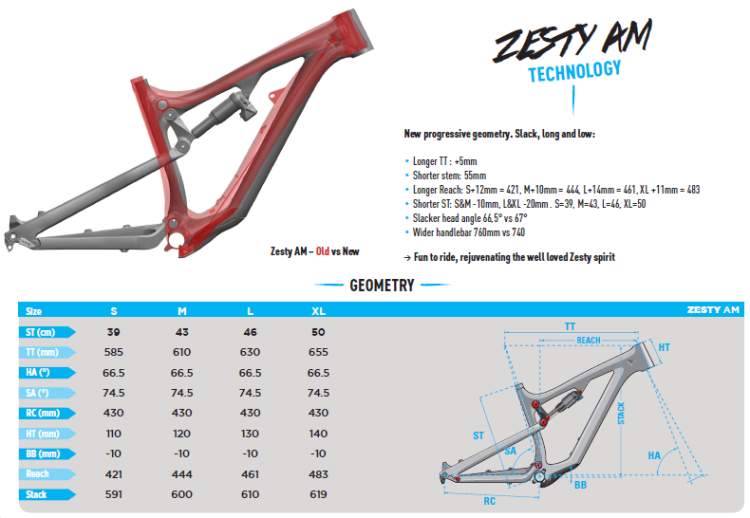 Like the Zesty XC, the position of the shock has moved, but also changed the geometry changed accordingly as well: 5mm longer top tube and a short stem (55mm) for a longer reach. The head angle becomes more relaxed as well (66.5° compared to 67º).

The new model can be fitted with a piggy back shock still mount a water bottle. There has also been a big increase in space for the rear tire to clear. 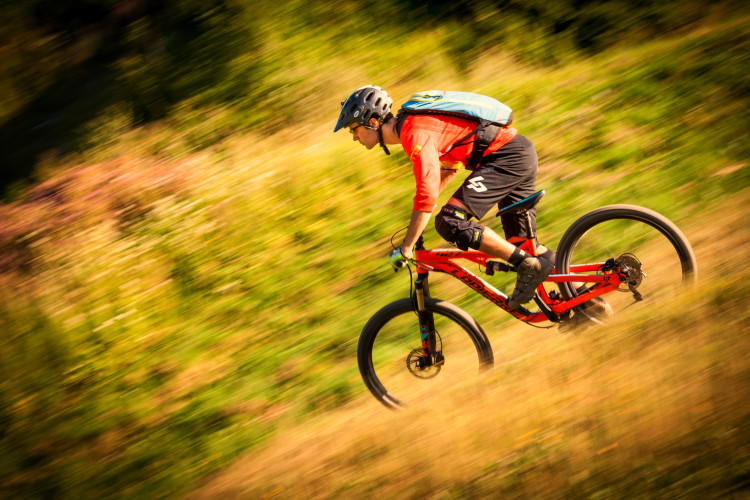 Since the Zesty AM, lends itself to heavier riding, we made a point to take it on more challenging descents. The technical forests of Les Gets proved to be an excellent testing ground for the updated all-mountain slayer.

Uphill the overall impression is of an excellent pedaling efficiency. Thanks to the EI Shock, which features an electronic system that automatically locks the suspension on ascents, then releases upon impacts from obstacles of a certain size. The bike is always snappy and responsive, even when you get up standing on the pedals. During our time spent on the bike, the system worked well. So how did AM pedal compared to the XM? The impression we got was that we couldn’t perceive substantial differences, partly because the riding position of the two bikes is really similar and so is the weight. Perhaps the difference can be felt on the long climbs and over long distances, on fire roads, where the minor differences would give the XM the advantage in terms of efficiency in pedaling.

Downhill impressions of stability and security on the steep and fast that we found on XM are confirmed. The bike is safe and stable, even when you let go of the brakes. The steering angle beautiful open along the top tube combined with a short stem, giving the Zesty stability of an enduro bike.

Overall, however, the performance on the downhills is significantly higher on the AM compared to XM, not so much on the flowy bits, but more so on the steep and techy sections where the extra travel and more aggressive geometry helps out.

The real benefit of this bike was definitely the fork: the Rock Shox Pike Solo Air 150mm (despite the photos, we rode the version with the Pike). The performance of the Pike 150 isn’t much different than 160mm version, and ensures extremely precise steering and excellent stability up front. Partially because the front end is so solid, on the more rough and challenging sections we noticed a bit of flex at the rear axle. Is this the fault of a not so rigid rear end? Maybe, but it could be a conscious choice by Lapierre’s designers wanting to improve the comfort of the bike and make it more gentle over long distances … and let’s not forget: we’re talking about an All Mountain bike, not an enduro, despite having a fork that made us think otherwise.

And what about a 2016 Spicy? For now nothing has been said, we know that we will be presented with interesting new products at Eurobike. We also hear some big news is coming in the E-Bike world, soon we will reveal all!