When we published the Spectral presentation last week, a lot of readers asked us about the new Torque, which we published a spyshot of last month. We were not wrong, since after a couple of weeks, during the same press camp in Madeira, where we tried the Spectral, Canyon officially showcased the new Torque.  The Torque was presented the day after the Spectral, and we could test the new Canyon weapon along with Fabien Barel, the major developer of the project, and Moritz Ströer, Canyon gravity sector chief engineer/super-talented rider. 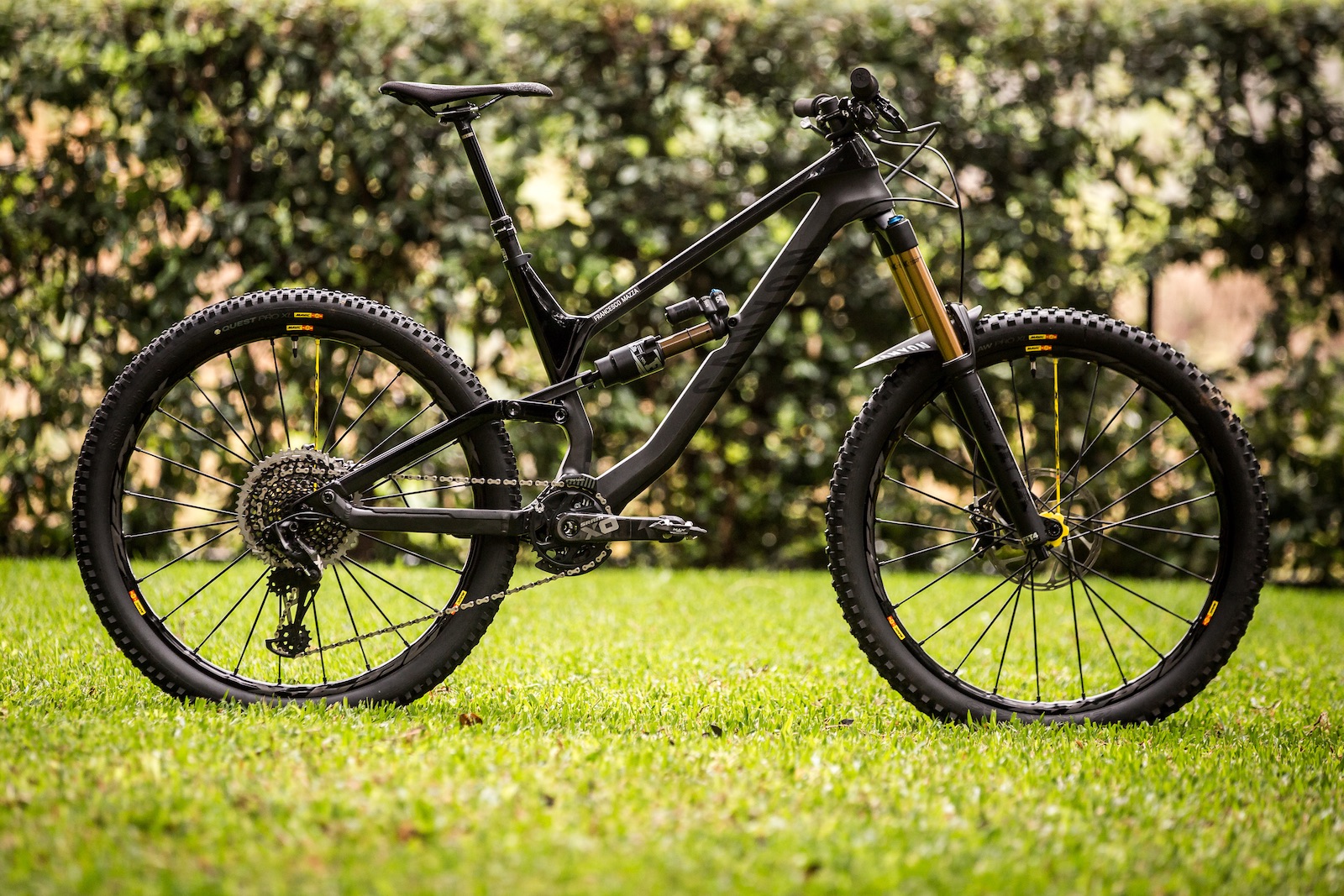 Since the very beginning and for several years, the Torque has been Canyon’s best seller bike. Thanks to it, the German brand gained popularity all over Europe and launched the direct sales model into the MTB world. It was a jack-of-all-trade frame which was embodied as Enduro, Freeride or DH, according to the specs and travel. The new Torque embraces the same concept for the whole gravity segment. This bike cannot be assigned to a single riding category: thanks to the geometry inspired by the Sender and highly efficient pedaling, it suits a rather wide range of trails – Enduro to Freeride, from a short ride climbing back up to a full hard day in a bike park. Consequently, development tests have been carried out at the same time by Canyon Factory Team athletes in both DH and Enduro. 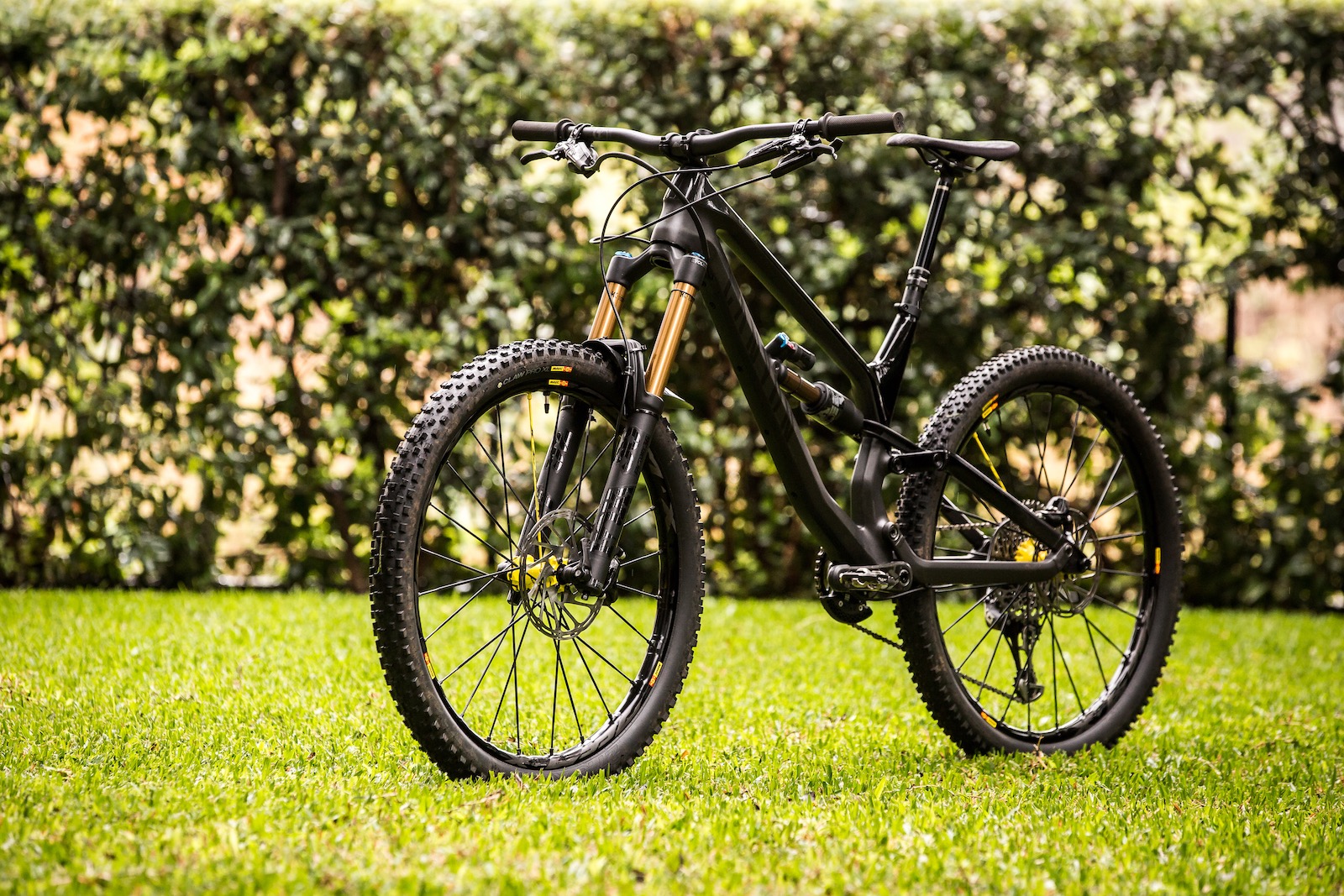 The design of the new Torque is completely fresh, with simple yet sharp, clean lines and a geometric shape. It is the output of the Canyon designer team which won the Design Team of the Year Red Dot Award in 2017. It embodies the new Canyon style, with the same details and features which characterize the Sender and the Spectral.

The projecting and laboratory tests of the Torque measured approximately the same solidity and strength level of the Sender. The CF version has a unidirectional carbon front triangle, crossed in order to gain more solidity in the areas which see the highest levels of stress. The rear triangle is made of 6066 aluminum, like the Sender, to have more reinforcement in that area, which is more exposed to big hits in the gravity segment. 6066 is the same alloy that the full aluminum version is made from. 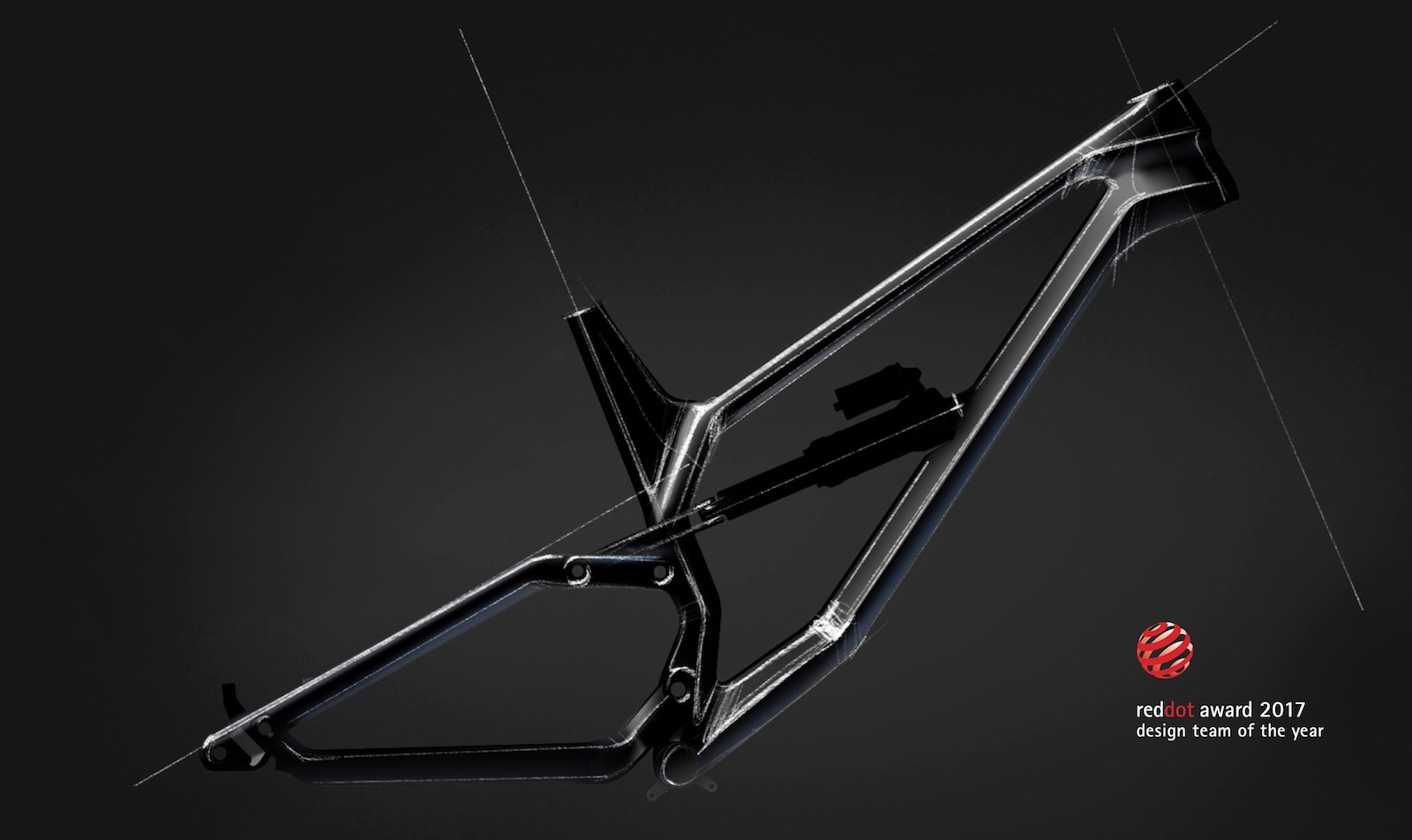 Like on the previous model, the suspension system is based on a Horst link, but the design and, consequently, the performance are new. The (Horst) link disrupting the main pivot and rear axle is now placed on the seatstay much higher, aligned with the wheel axle and the link which compresses the shock. The kinematics were designed to obtain a compression curve similar to that of the Sender, but with more attention to anti-squat and pedal kickback figures, providing more pedaling efficiency based on the target market for the Torque. The shock is metric, with an eye to eye of 250mm and a wheel travel of 175mm, matched by a fork with 180mm of travel. The kinematics act on long-lasting industrial sealed bearings, which provide increased stiffness to the rear triangle. 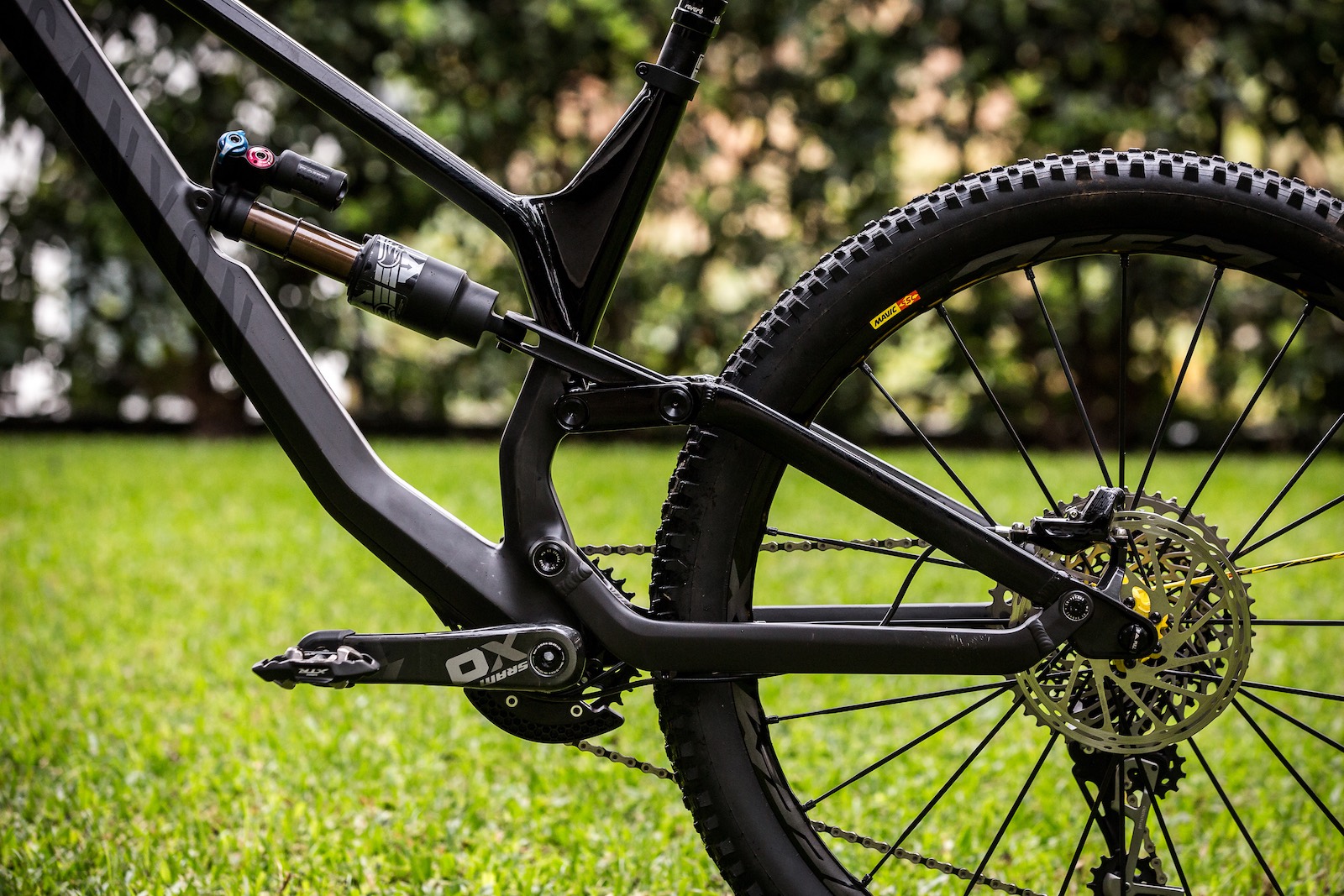 The compression curve is as the “Triple Phase Suspension” concept, which we talked about presenting both the Sender and the Spectral, and which identifies all the new models of Canyon. The travel is divided into 3 parts with a different behavior depending on the kinematics compression curve. In the first part, up until the sag zone, the leverage ratio justifies the use of an air shock to have good sensitivity on the smallest bumps. The central part of the travel is aimed at having reactive and supportive suspension, which enables an active and dynamic riding, still being stable while pedaling. The end part of the travel is slightly progressive to let the rider use all the travel and have good bottom-out resistance. Moderate progressivity enables the user to add a spacer to the shock to obtain a steeper ramp to the rear suspension curve. Like on the Spectral, also on the Torque there’s the simple but genius cable protection channel under the down tube. It is a simple and handy “hybrid” system: it combines the clean design of internal routing with the ease of maintenance of an external routing. The covers which form the channel keep the cables attached to the frame, well protected against dirt and muting noises from vibration, unlike some internal routing solutions. The impact-resistant plastic covers don’t only protect cables but also the down tube itself. 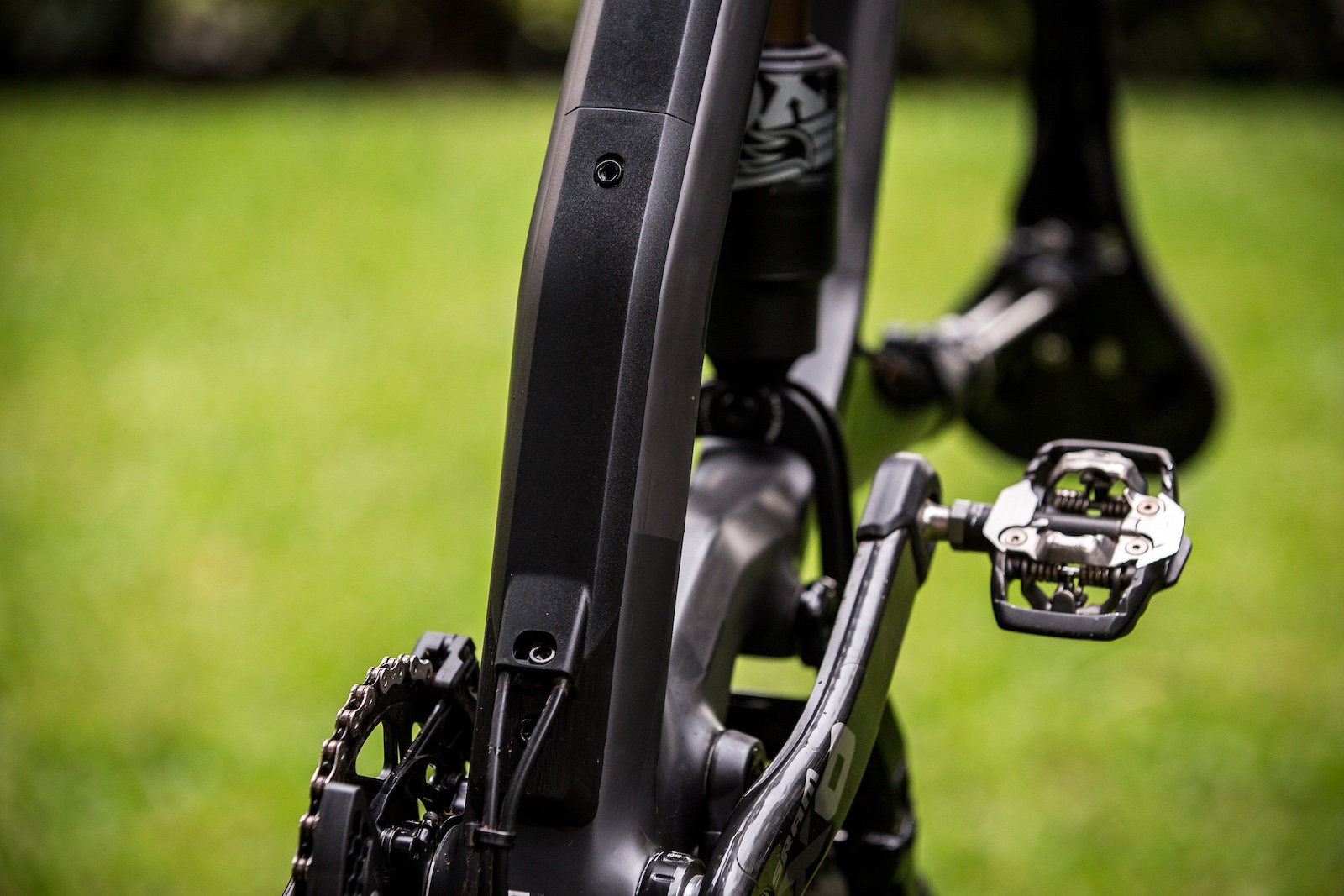 The 12mm axle is equipped with a lever which, after having tightened the wheel, hides inside the top of the axle, resulting in an aesthetically pleasing, practical and safe solution. The lever is protected against hits and it is unlikely to get loose getting caught on some obstacles along the trail. Once the lever is inside, it takes up about the same amount of space as a common thru-axle. Speaking of dropouts, in the following picture is the rear brake caliper mount, with standard Post Mount using a 180mm disc that mounts directly with no adapter. 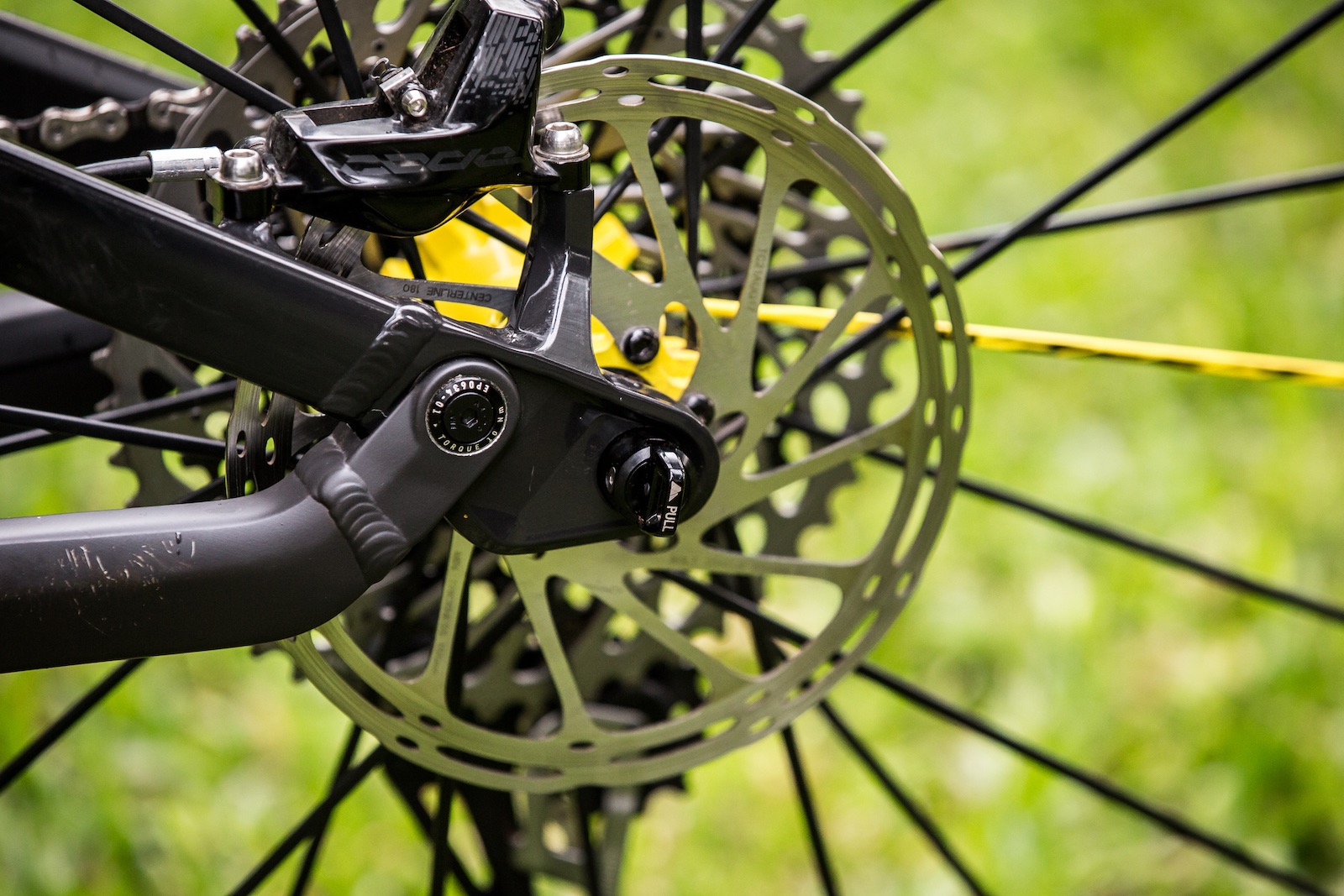 The bar and stem are new for Canyon: the new G5 components specific for the gravity segment. Every Torque model with a carbon frame, plus the top aluminum model are equipped with the 40mm G5 stem. The 780mm wide bar with 20mm of rise comes from the new G5 series too. CF 9.0 PRO model, which we tested during the presentation, has the carbon version of the bar, while all other carbon and aluminum models of the Torque feature the aluminum G5 bar. The bar shape, with 5° of upsweep and 8° of backsweep, is a good compromise between comfort and aggressive riding, and generally conveyed a nice on trail feel, without being too stiff or too nervous and flexy. 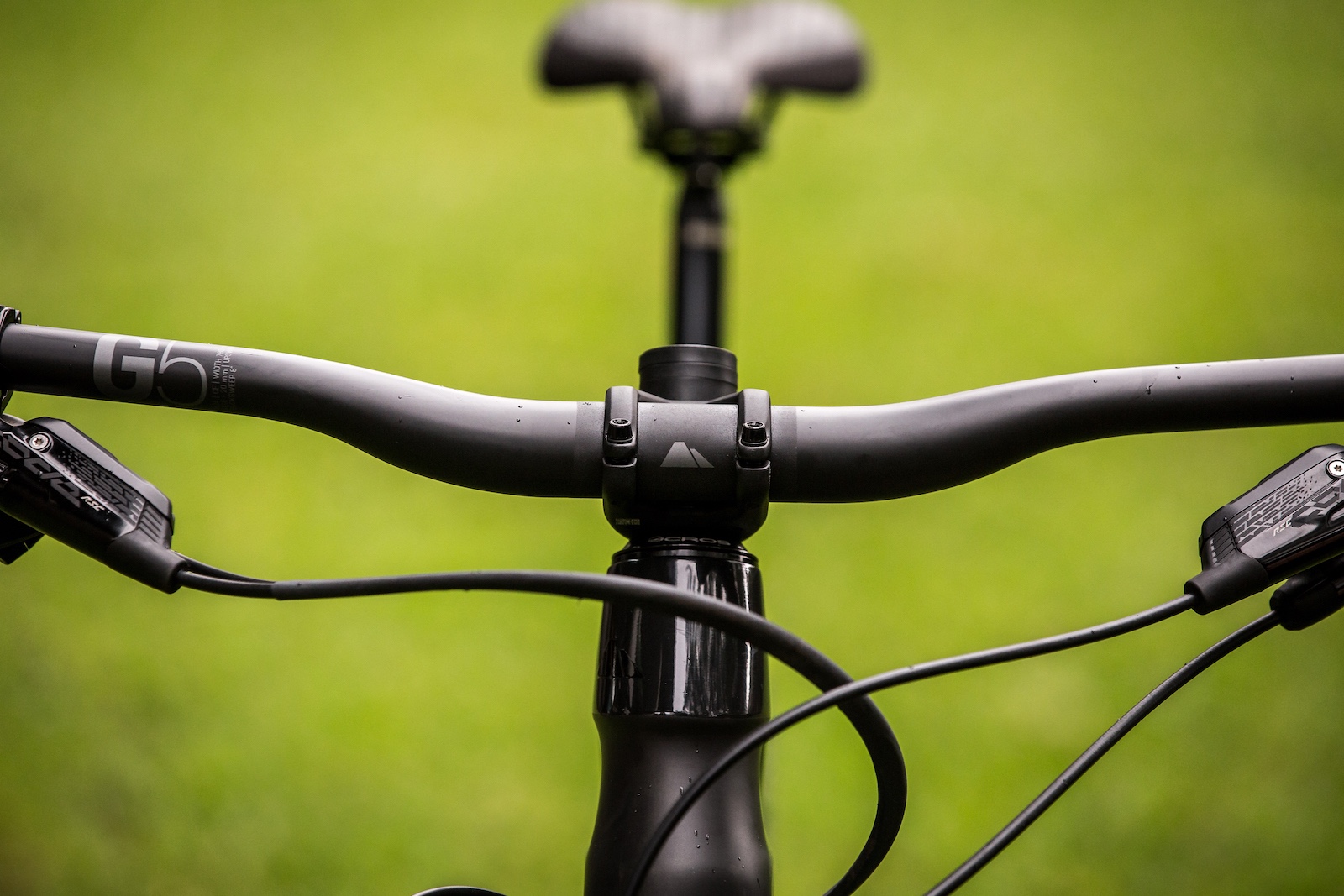 As already mentioned prior, our test of the Torque was carried out in Madeira, together with Fabien Barel, the day after we had tested the Spectral, but the weather did not get better. Shockingly, it got worse and the heavy rain made the ground even more muddy and tricky. We moved to the other side of the island and faced less technical and rough trails but way faster and more flowy, with less rocks but more roots, through pine and eucalyptus forests leading down to the ocean, with some jumps and berms to make the tracks more fun to ride. From the very beginning, the Torque was intuitive and easy to figure out. We felt confident despite the difficult conditions of the terrain. The geometry is modern and balanced: a good compromise between an aggressive style and still being manageable. The central but well poised position of the rider gives a feeling of safety and total control, while still leaving a large margin to have fun, and ride loose. Nimbleness, conveyed through the  geometry, is well matched by the supportive and reactive suspension, which enables a dynamic yet fun style but also performs at a very high level when the riding gets tough. Despite the long travel, we had no problems also on the pedaling sections. By the way, some of the climbs that we faced along the trail were quite steep too. We can’t wait to get rolling on a long term test to discover the real potential of the bike, as we were very excited by this first ride. More to come… 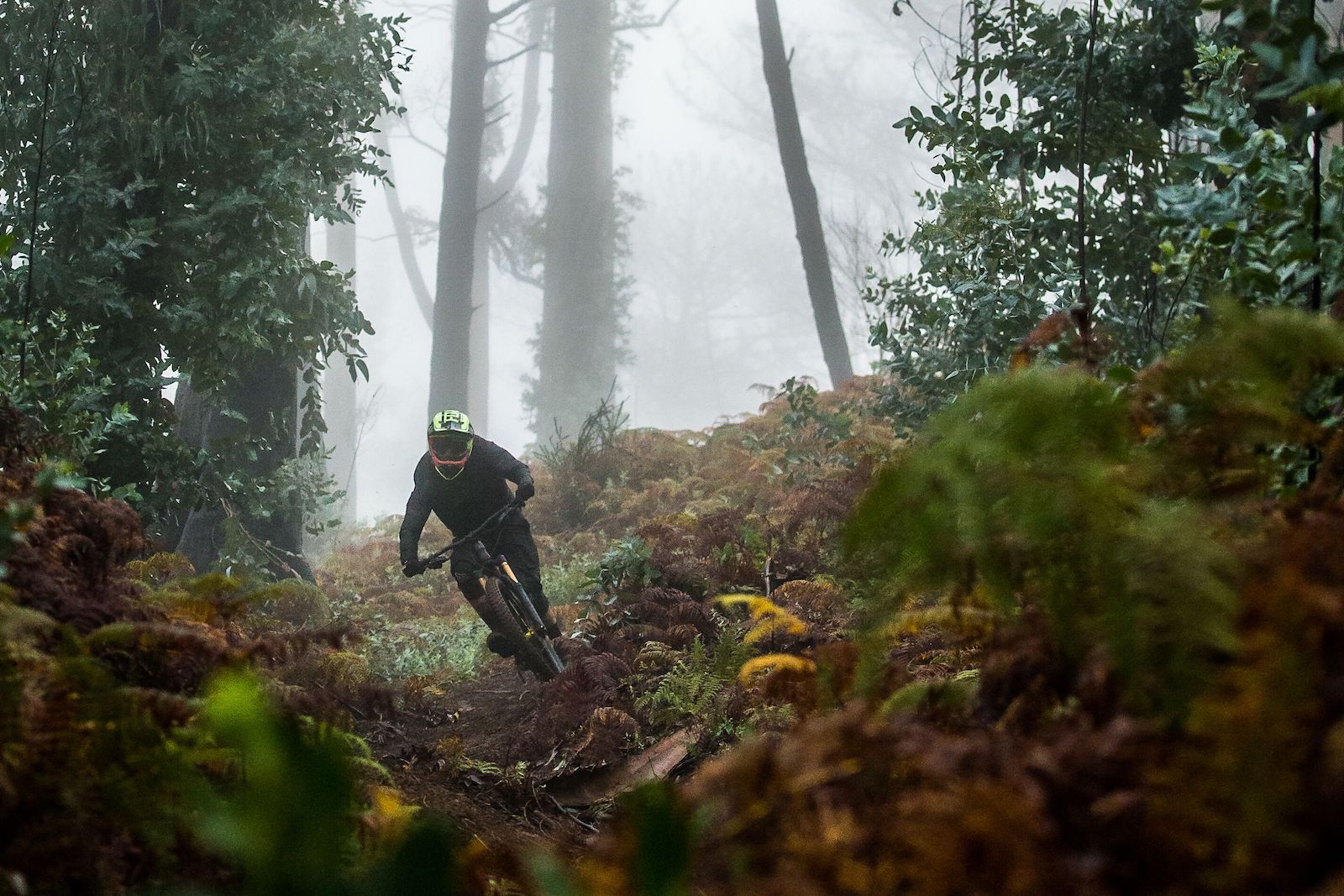