Giant invited us to their US office in Newbury Park, California to sample their revived efforts at an all out XC race weapon. Over the years, the Anthem has always been their shortest travel full suspension offering, but on a couple of occasions, particularly as of late – it has meandered away from its roots of being a dedicated XC race bike. With a complete redesign from the ground up, it hasn’t simply jumped back on board with the typical norms of the XC race world. In fact we found it to bring something unique to the table; mainly in terms of its suspension which features the lowest leverage rate in the XC world. Read on to see how it treated us after a fairly in depth affair on a handful of classic Southern California trails. As one would actually expect, the new Anthems are up to speed with Metric shock sizing and Boost spacing. The bikes feature just 90mm travel out back paired with 100mm travel up front. Upon chatting with off road senior global category manager Kevin Dana, we learned that Giant had felt so much improvement from their new suspension layout that it actually required less travel. More on that as you read on about our ride impressions. 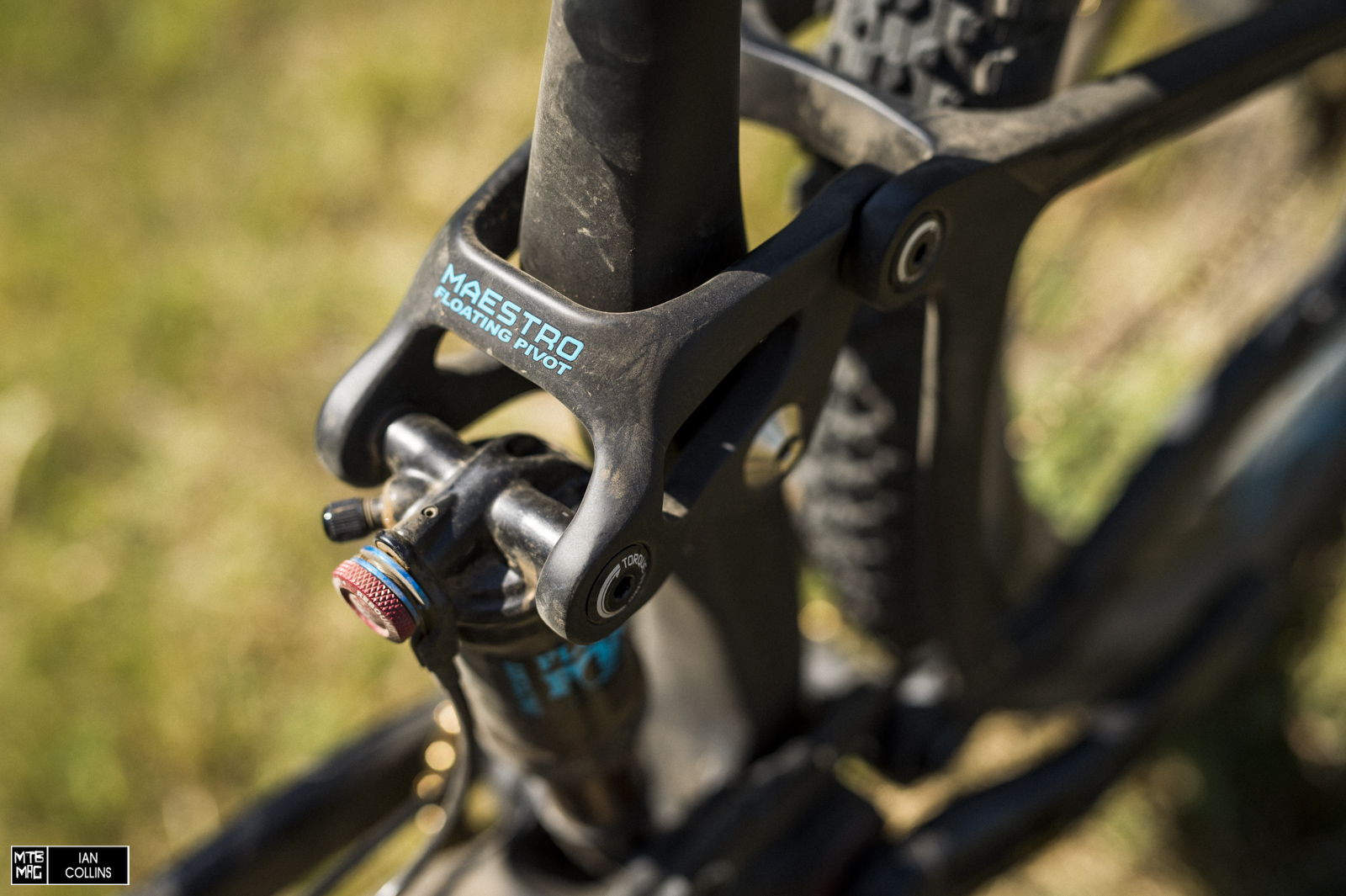 All Anthems feature a handlebar mounted remote lockout for the fork. The flagship Anthem 29 Pro 0 features a bar mounted lever that simultaneously locks out both front and rear shocks. As the bike’s suspension is Fox front and rear, thus so is the lever, which we found to be very ergonomic and clean, although slightly counter intuitive. The suspension is opened by the larger paddle, which requires a longer stroke and more force. Locking the suspension requires a delicate tap of the smaller upper paddle. 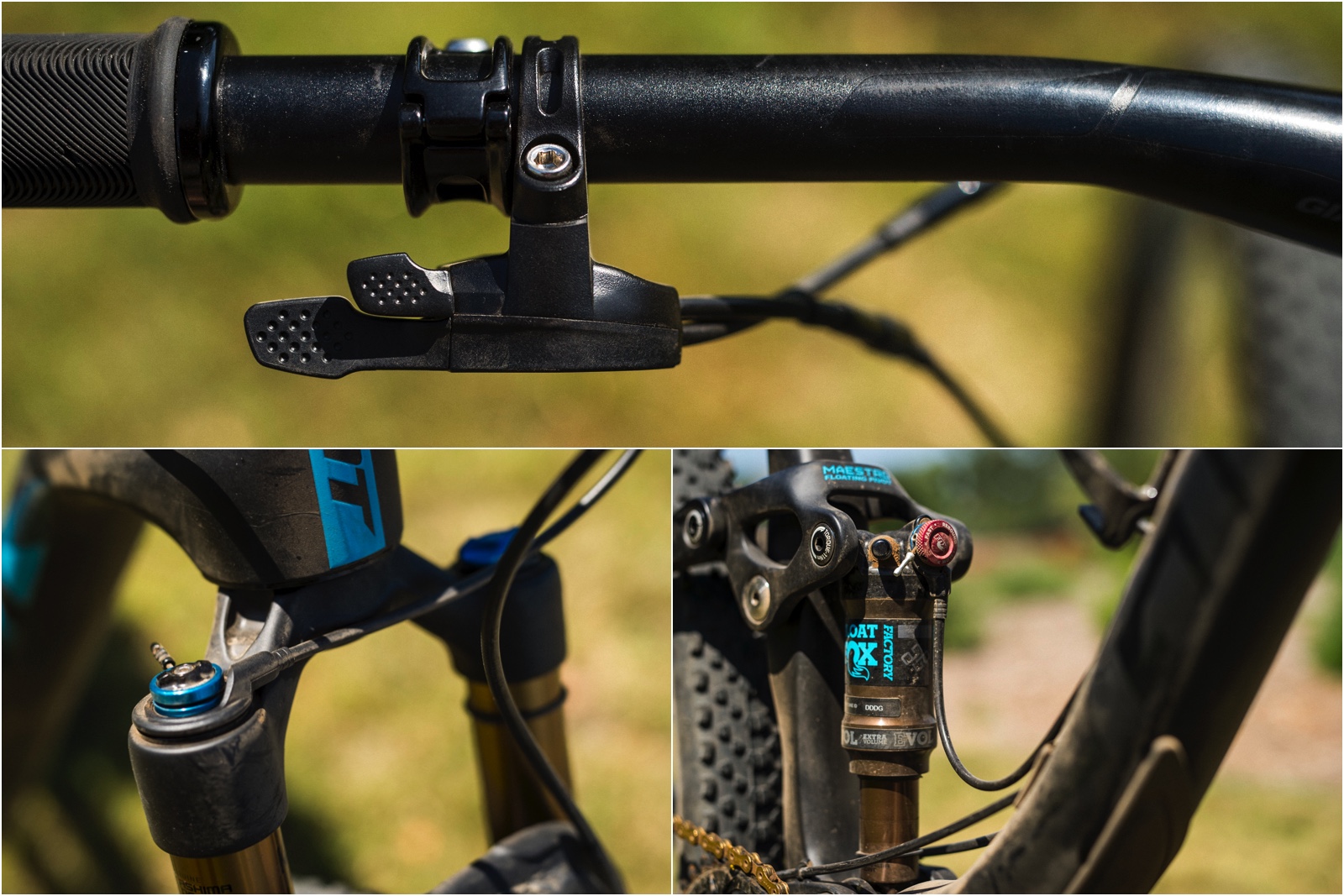 Aside from the obvious, the Anthem features a 27.2mm diameter seatpost. This may cause some grumbles but Giant was quite clear that this bike is not a short travel, quasi trail bike…it’s an XC race bike. A 27.2 carbon fiber seatpost is as light as it gets and is also the most compliant rigid post you’ll find. For those who insist on adding a dropper, there is a clean internal routing option. KS and and Thomson are a couple of solid brands who make 27.2 droppers should you want to go that route, so you’re not completely left out to dry. As you can see in the photos below, Giant opted for an integrated seat clamping mechanism in yet another effort to keep the weight down. It’s adjusted by a 4mm allen key and the rubber grommet covers it for a somewhat clean look. 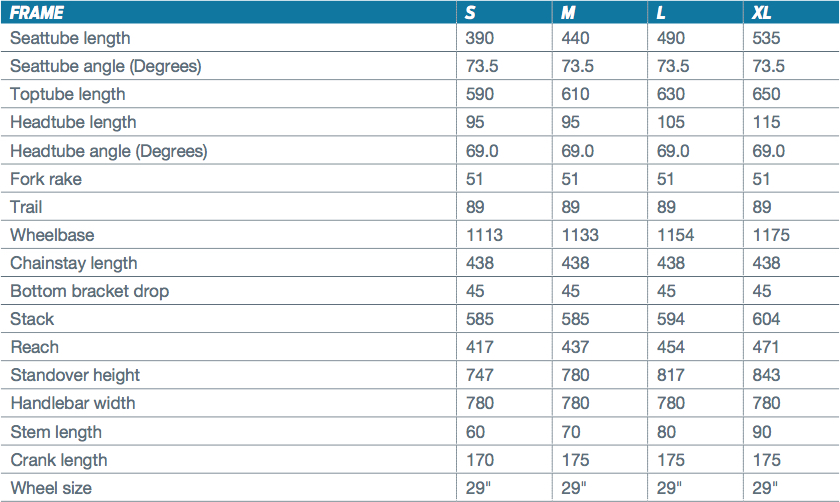 The new geometry set sees an abbreviated rear end; Athem 29 of old was a full inch longer in wheelbase, mainly from a very long chainstay. This version hits the sweet spot with 438 mm chainstays, which are easy to manual but still plenty stable at speed and firmly planted while climbing. The rest of the numbers are nothing shocking: a 69º head tube angle combined with a 51mm offset in front of a fairly long 454mm reach (size Large, tested)…Let’s see how it did out on the trails…

While long time Giant employee Frank Trotter helped us set our bikes to sag, we got chatting about rear suspension. After doing a bit of our own math, calculating the Anthem’s freakishly low leverage rate (2.11:1), we asked Frank how much pressure he put in our shock to reach ~25% sag. It was 185PSI, the same as our tester’s body weight. That’s simply unheard of in the XC world; typically a 185 pound rider has to run shock pressure somewhere to the tune of 250PSI+. 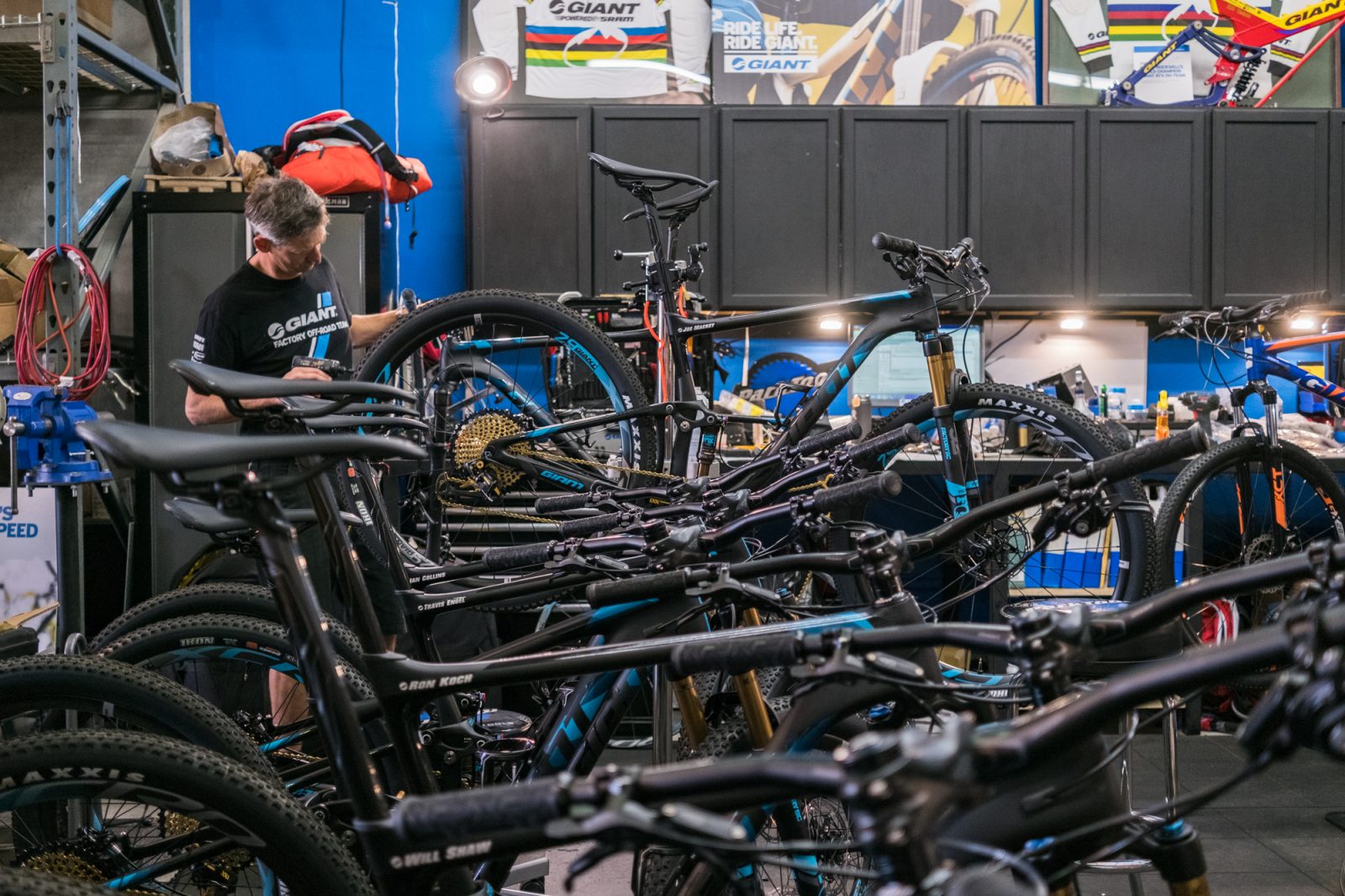 So why is the lower leverage rate so beneficial? In simple terms, the rear shock requires MUCH lower air pressures, thus allowing a lower breakaway force (read: stiction), faster responses to directional changes and a much more supple ride. It also means that the damping has a broader range and since the shock isn’t as easily overwhelmed, the damping is far more effective. The other half of the suspension component is kinematics: damping rate curves and the right axle path is also very crucial to making it all work effectively. More on that once we hit the trails.

We headed out directly from Giant’s office to a web of trails that meander through the Santa Monica mountains and feed out onto the beach just north of Malibu. In classic So Cal style, they were hardpack decomposed granite with a loose marbly surface providing less than ideal traction. Basically, you have to be on your toes, but it’s terrain our tester was well familiar with. 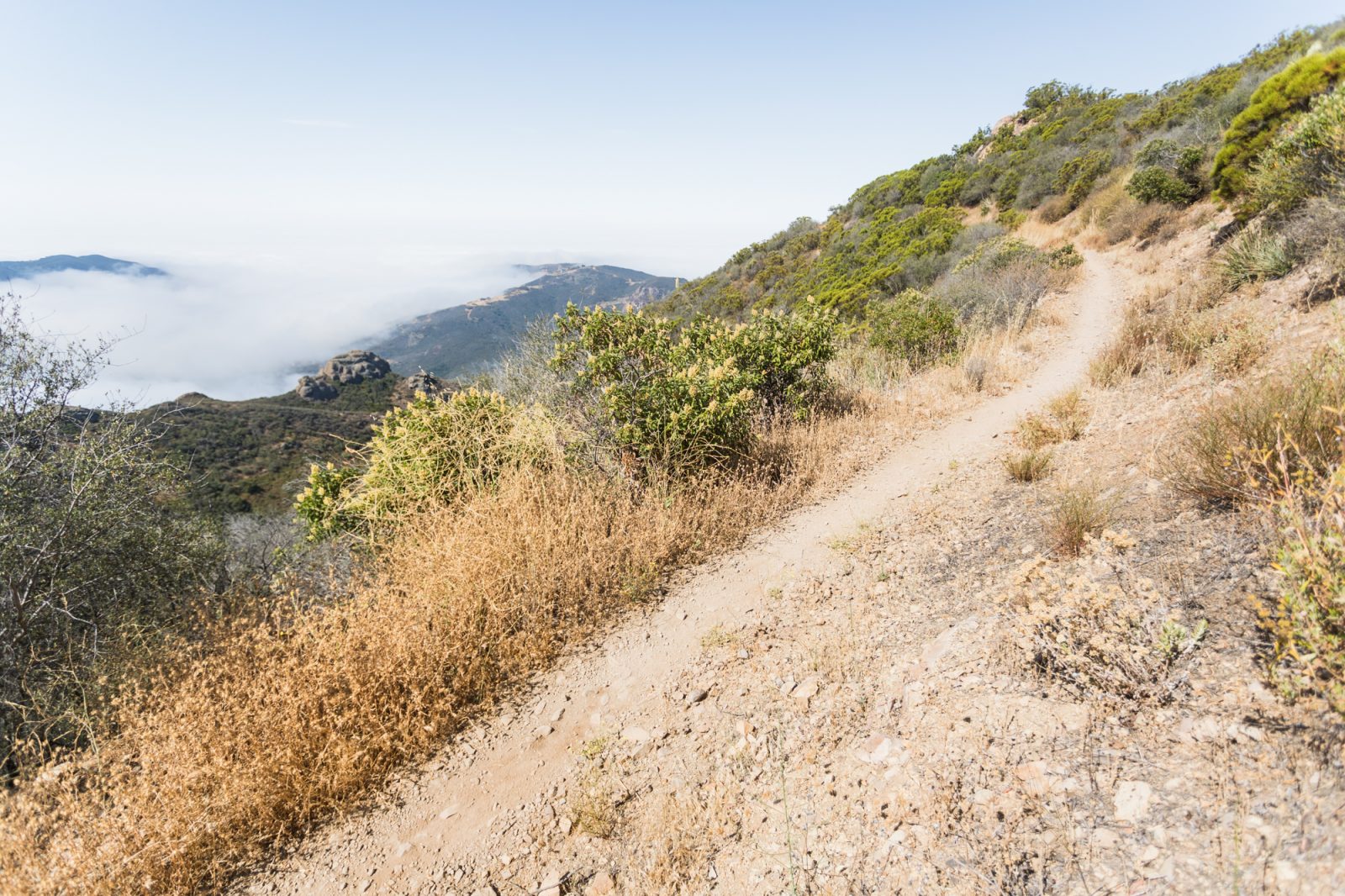 The fit and weight distribution of the bike was relatively spot on. Our long limbed tester had to slide his seat rails all the way forward as the not so steep 73.5º effective seat angle combined with a 25mm offset seatpost had him sitting a way back. Ideally, at 6′ tall, he’d opt for a zero offset post and be quite content. The 80mm stem was just right though, and there were plenty of spacers to play with stack height depending on personal preference. 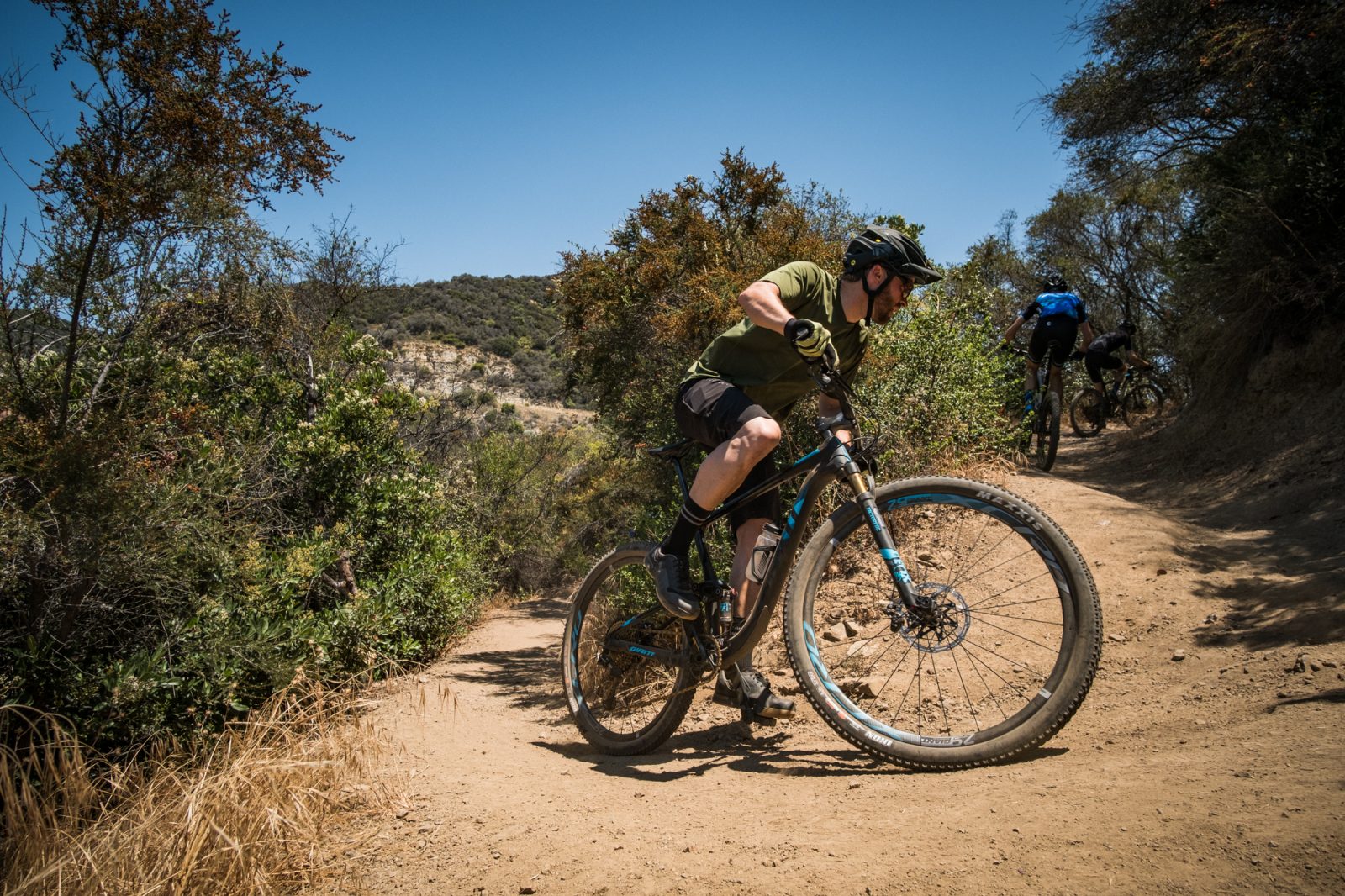 If what we’ve already mentioned about the rear shock hasn’t already clued you in, the first thing we really noticed was how sensitive the rear shock was. When you picture a full suspension XC bike typically you envision a bike that’s a bit harsh, but that didn’t mean the bike wallowed. It had a nice firm platform right at the sag point; to be honest we only used the lockout(s) on road or long fire road climbs. The combination of traction and composure on the climbs fully unlocked was excellent. Up front you’ve got 24 clicks of low speed compression so you can fine tune things quite nicely with the FOX 32 Step Cast fork. In terms of big hits, the bottom outs were nice and subtle with excellent control over the rebound, a stark contrast from higher leverage bikes which can get a bit wild. The wheels proved to have a nice ride; they took the edge off but were plenty stiff in the corners. As far as long term durability and strength, we can’t really comment as we rode fairly tame trails and only for a few hours. Our one complain with the wheels is that while we commend Giant for using the DT-Swiss internals, they opted for the rather slow engagement 36 tooth ratchets. On entry to mid level bikes we understand that’s appropriate, but we’d love to see them step it up and take advantage of the 54 tooth ratchet. It can be upgraded later for around the tune of $80, but on an $8,500 flagship bike meant for racing, we feel it’s a no brainer to spec it from the get-go as it’s a huge advantage, particularly on the technical climbs. 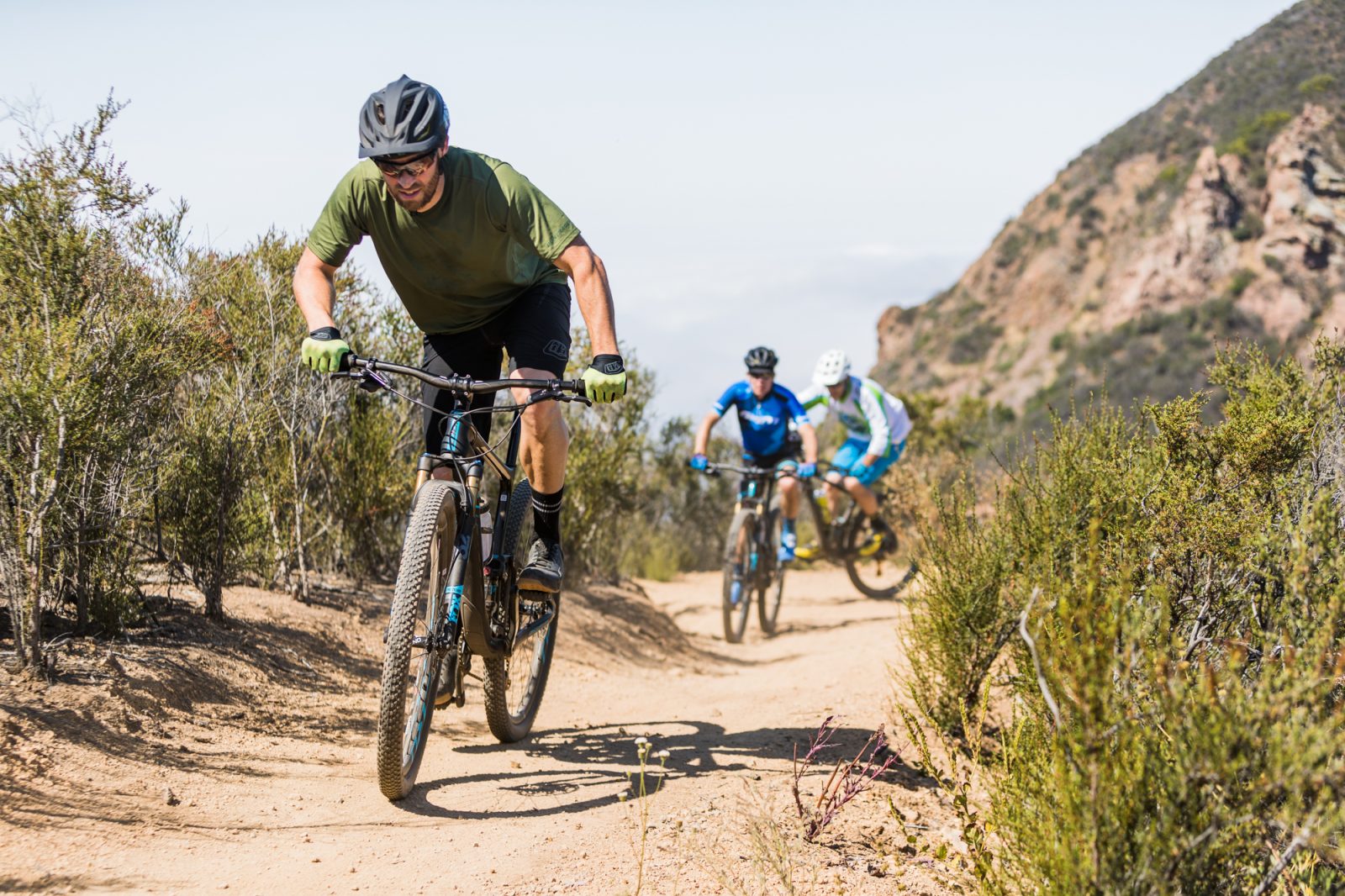 In terms of components, SRAM’s Eagle XX1 group was excellent, per usual and we found the 34 tooth chainring to offer just the right amount of range. The Maxxis Ikon tires were fast rolling and provided just enough grip. SRAM’s Level Ultimate brakes were flawless; the choice of a 180mm front rotor was wise, but weight weenies could swap to a 160mm should they see fit. The handlebar and stem felt nice, but the seat was unsurprisingly not very comfortable. All in all a nicely spec’d bike though… 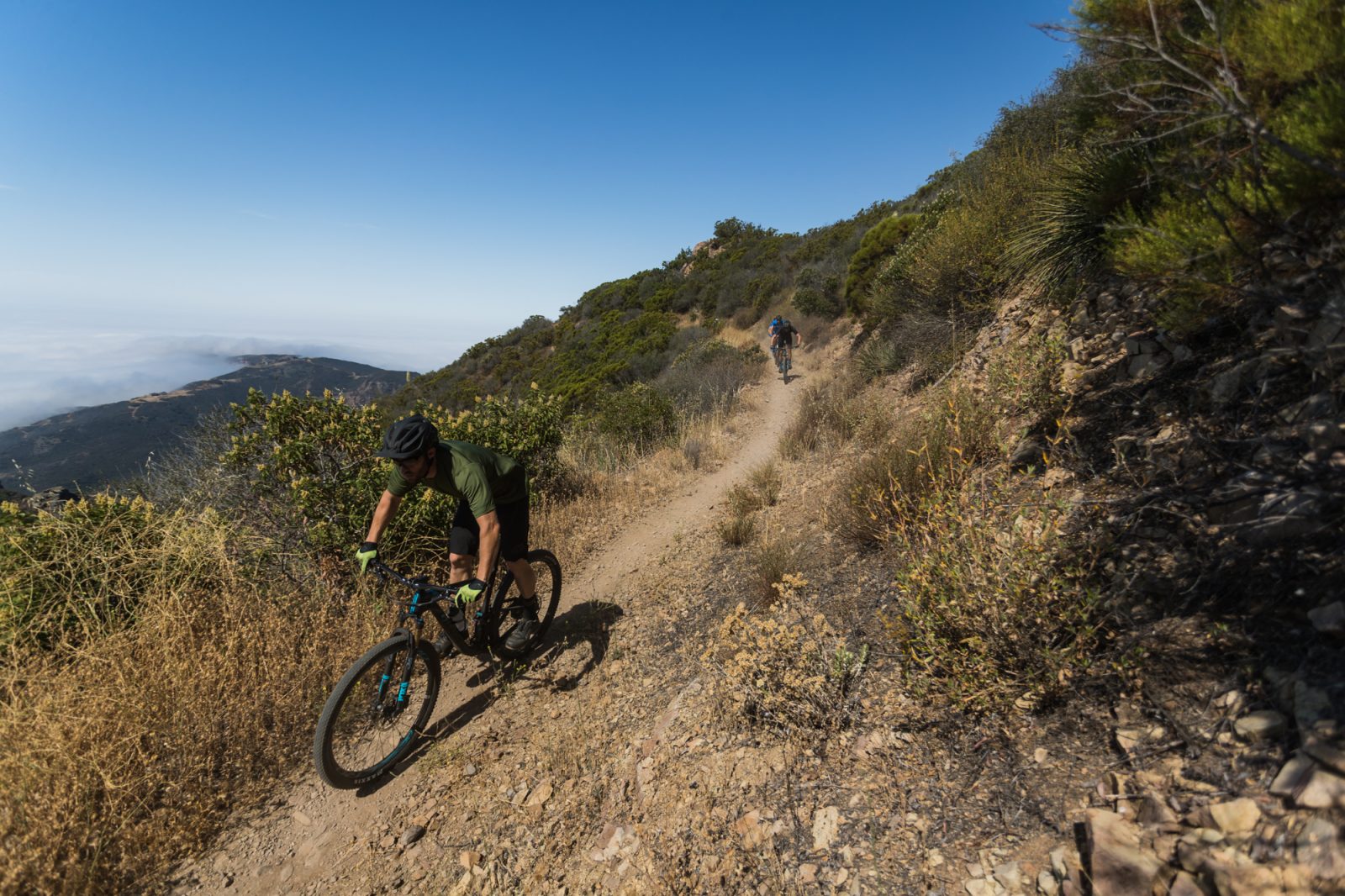 In terms of handling, we think the geometry was quite good save the minor tall guy gripes with the not so steep seat angle. The head angle was plenty confident in rougher, faster terrain while the 51mm offset kept it steering with precision. The bottom bracket sat a touch high, but allowed for consistent pedal strokes in offbeat, rocky and technical climbs. We felt that the somewhat short chainstays offset the high-ish BB, keeping it quick in the turns and very easy to manual. In terms of stiffness, we certainly didn’t feel any noteworthy flex coming from either the front or back end, and the well tuned layup took the edge off nicely.

In the grand scheme of things, we feel Giant has done a great job with the new Anthem. We’ve love to spend more time on one in a long term test as our time was fairly limited, but our first impressions were good. The most important factors were the excellent geometry and the absolutely standout rear suspension. Our only gripes were fairly minor and are easy and affordable to swap out. We’ll keep you posted on the possibility of a long term review, but all in all we think Giant has done a great job with their return to the high performance XC racing stage.