Giant Bicycles have been working hard recently on their contribution to the huge increase of much improved E-bikes for 2017. The Giant Full-E is built on an aluminum frame and utilizes their Maestro suspension one piece linkage and Yamaha motor system. We have spent a few days with Giant testing their latest bike to find out how it performs.

Numbers here tell the story, enough slack in the head angle for some speed and enough length to balance comfort with stability. This is not an extreme frame design, Giant have gone for something that is accessible to all, E-bikes have yet to take on the top end (extreme end) of the market, expectations to what an E-bike can do are about accessibility, so where you can ride and how comfortable it is to get there.

Giant’s use of the Yamaha system is an interesting development. Particularly because it has been highly customized to meet their needs. Giant has enough development funds that it was able to build its own display unit and software mapping. According to their development team – for them the Yamaha motor is “more about torque”.  So in their opinion, it produces a more natural feel to pedal with and goes with the rider rather than carries the rider along.

The stats below give us a clear idea of their thought process, especially the demand for a 500wh battery pack that supports riding for a fairly significant effort. The battery pack has 40 panasonic cells which are arrange in parallel and series to give a 36volt energy source.

Testing pedal assist bikes has become a fairly standard procedure, with test rides normally leaving the base, heading for the closest steep climb and hammering straight up it, later on in the ride we normally ride along a ridge line, then take on a proper single track downhill. The Giant Full-E test ride followed exactly that procedure.  The point that’s good about this is that immediately the product is tested to the limits, of course it’s not a long term test, but it gives us a good idea of the extreme things one can do with an E-bike.

The Full-E is an interesting bit of engineering to ride, it looks pretty good for anyone that happens to glance at it, with smooth lines. With 140mm of rear travel and a travel adjust Rockshox front fork, Giant’s design team have spent a lot of time getting first impressions right. Integration is the key here, it looks like a normal bike, consumers tend to like products that don’t wander too far off the established image of what a product is supposed to be. 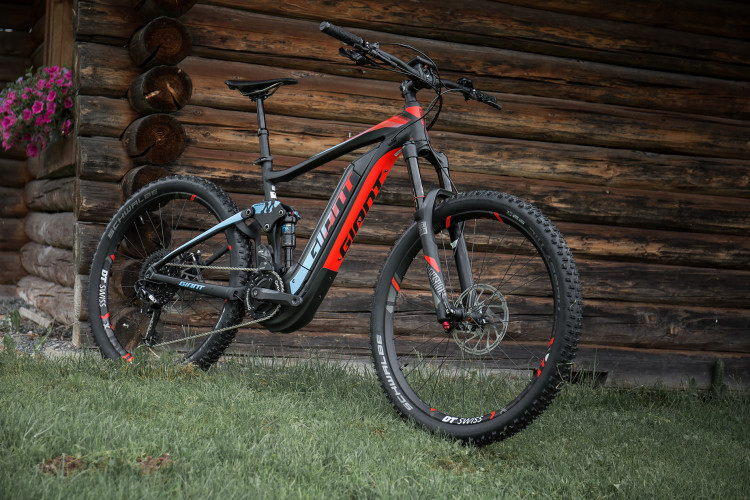 The component build is high quality with the Full-E being equipped with SRAM’s EX1 drive train. That alone makes this bike different from last years offerings. There are no compromises taking place. The rocker link is also all new for this bike, made of carbon fiber, that has been made by a unique process that only Giant does in their own factory, it delivers a part that is light, very strong and highly customisable in form. This then connects to the well known Maestro suspension linkage which is controlled by a Trunnion mount Fox shock which is a completely new design. The idea of this shock design is that it lowers pressures that are needed in the shock. In fact our setup pressure was about 100 psi lower than what we would normally put in a shock. 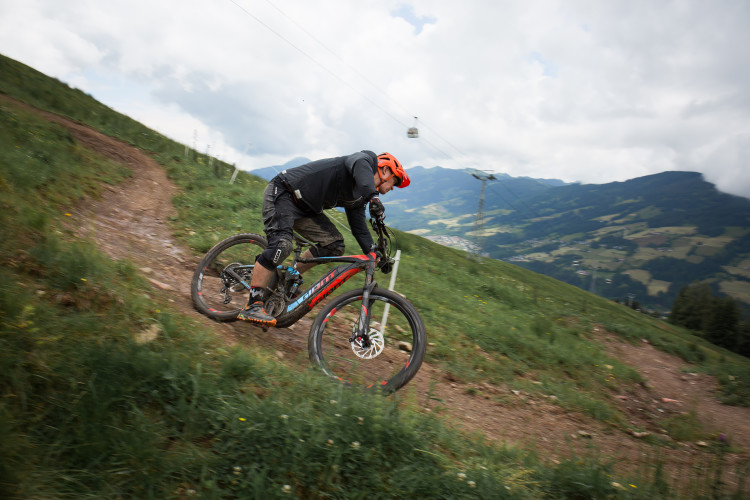 This shock gave us a different feel on the trail, the bike handled stutter bumps incredibly smoothly and did not seem to heat up like a normal shock, the knock on effect being that our heavier bike felt more planted than usual on the trail. Up front a Lyrik 160mm travel adjust fork was used, which on climbs proved to be useful, especially really steep climbs, lowering the fork kept our weight balanced just right and we were able to obtain a better overall body position on the bike. Combining this suspension adjustment possibility with the smoothly functioning Giant dropper post and the rider has full control of rider position in a multitude of situations. 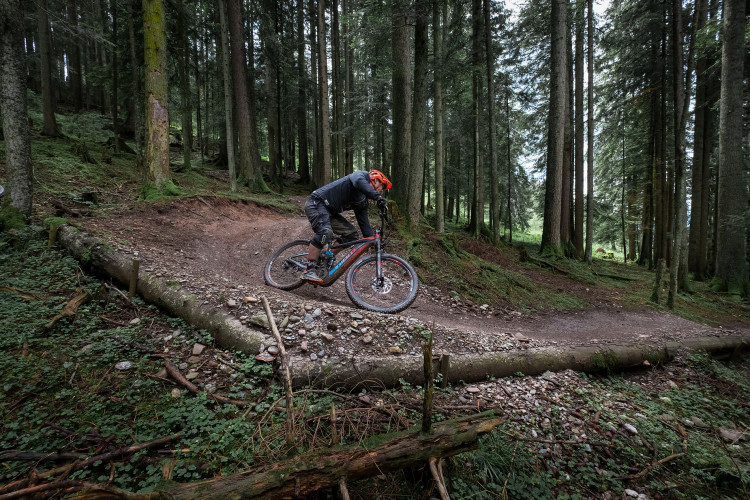 Cornering with 2.6″ tyres in most conditions and a Boost wheelset gave a direct feeling that was grippy. The use of 2.6″ tyres is different compared to the wider 2.8″ or 3.0″ plus tyre format that many other brands have settled on. 2.6″ feels almost normal, but offsets the extra weight of the bike with out making the bike tyre feel too big.

This brings us on to handling, Giant have gone for a frame design that will please most riders without being too extreme. The body position is fairly upright although the front end is not excessively high. This gives a good position for steep climbs keeping the front end down but giving enough weight over the back wheel for maintaining grip. In descent mode this position is perfect for an easy going ride, the bike remains stable and planted which is reassuring. We found ourselves looking for a smooth line down the hill and enjoying the flow that was on hand. It is not aimed at the extreme Enduro rider. 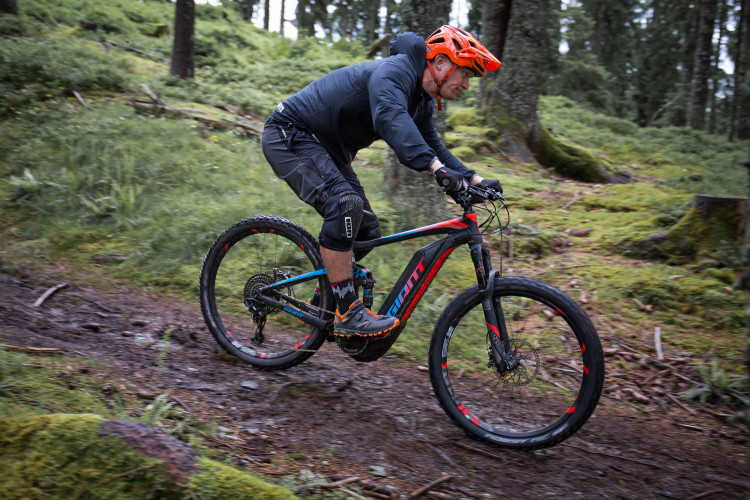 Giant were very clear in their specification of a motor that it had to support the rider, not carry him along.  With this in mind, the Yamaha system has been adapted by Giant to give a natural pedal feeling to the bike. We found that the system was easy to use, with three power modes that are very easily adjusted on the toughened bar mounted remote, plus there is an ability for on the bike charging. We liked a lot how this assist system has been designed for off road use.  Giant did their homework on this obviously, as the parts are made to their specification.

When pedaling with the Yamaha motor, the rider is directed into a leg motion that gives optimal power/speed at about 75 rpm. This direction was interesting as the focus is not on out-right speed but torque. Torque gives control to the rider, we found the bike got away from us less and we were telling the bike what was going to happen, less of a “passenger” feeling. This is ideal for technical climbs and sections in the trail where you need to give a boost to bike speed without too much of a surge. We spent most of our time in full power mode which gave us enough energy for 1300-1500 metres of climbing and about 3 hours on the bike for our 85 kilo rider weight. The EX1 drive train allowed us smooth shifting under power consistently and is a big move forward when combined with the customized Yamaha system.

Giant have lined up a bike that will not disappoint anyone who climbs on board. The Full-E is not an extreme bike, it will allow exploration and riding in pretty much all places that you want to get to on an E-bike, it will do so keeping the rider comfortable and in control. 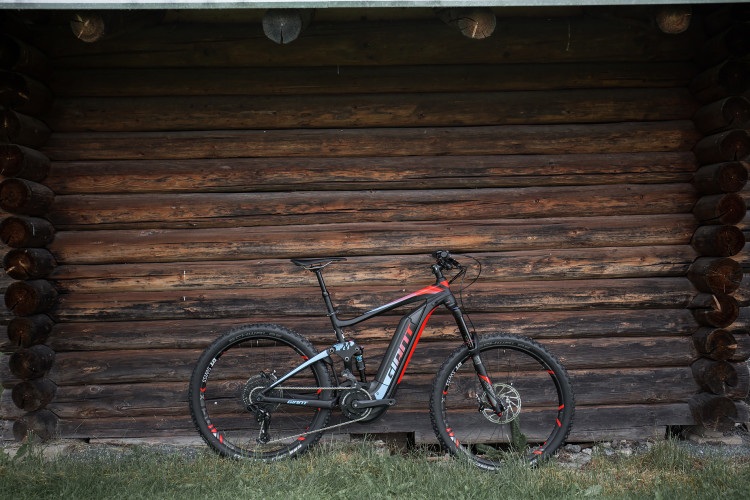 The use of a multitude of component improvements that have come on stream for 2017 plus all the experience gained from the initial development of pedal assist bikes has lead to a product that pretty much ticks all the boxes for most riders who want to try an easy going pedal assist bike. The Full-E will give a fun experience in which ever conditions that the it is ridden in. We hope to have more time onboard for a more in-depth test later in the year.