Öhlins just showed us some new features on the updated version of their single crown RXF 36 fork, which has been renamed the RXF 36 Trail. The fork is being launched alongside the TTX Air, the new air-sprung rear shock, which has been completely redesigned by the Swedish brand. Aboard a Specialized Enduro 29, we tested these two new Öhlins products in the Järvsö bike park, a location in central Sweden on a quaint hill with a host of really fun, well cared for tracks. 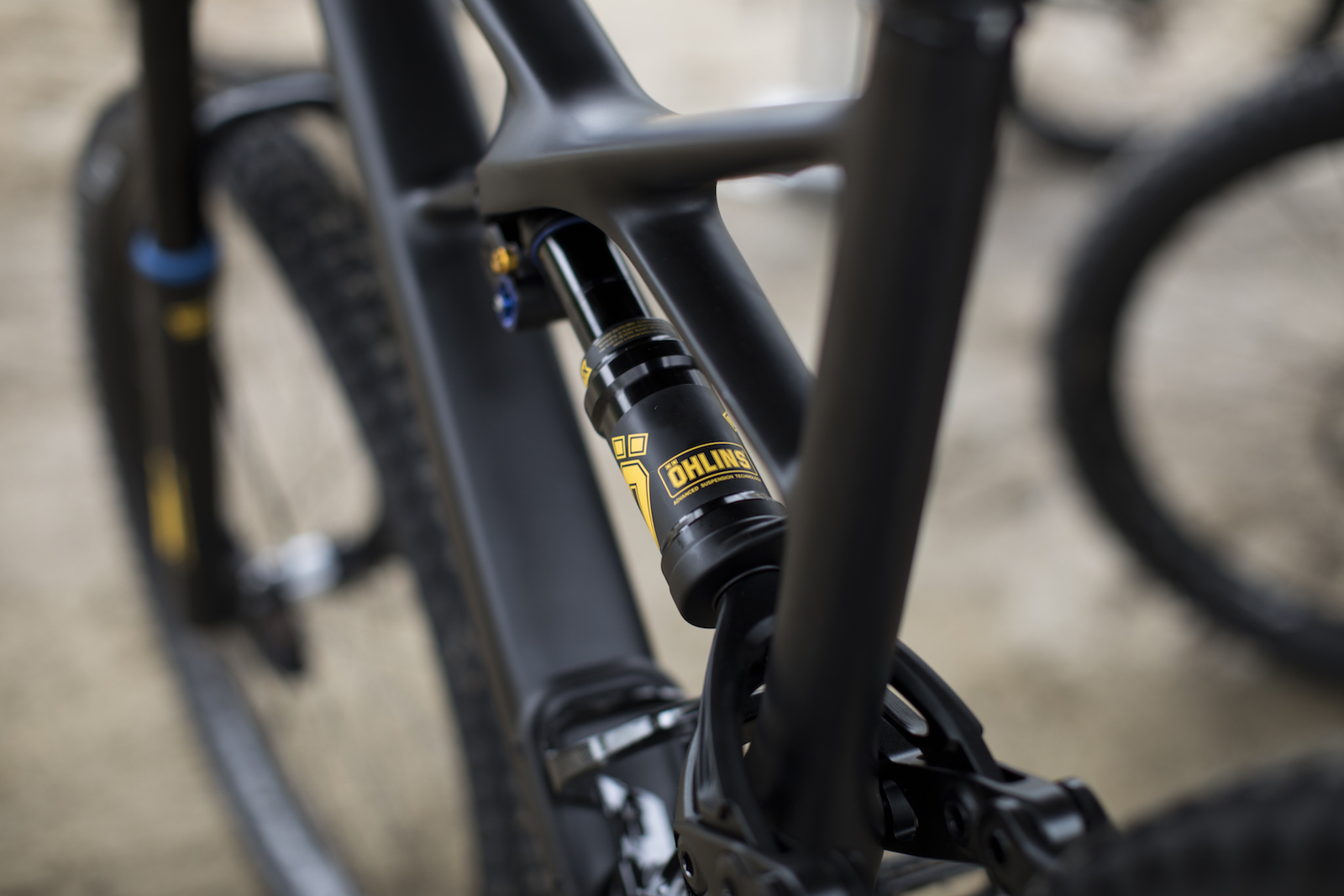 While inheriting the name from the previous model, the fork has been redesigned in every detail, from the lowers to the uppers, from the hydraulic cartridge to the spring, both for the air version and the coil sprung version. In addition, the new RXF 36 Trail is decorated with the same graphics introduced by the TTX DH presented in June, which marks the new course of Öhlins products. 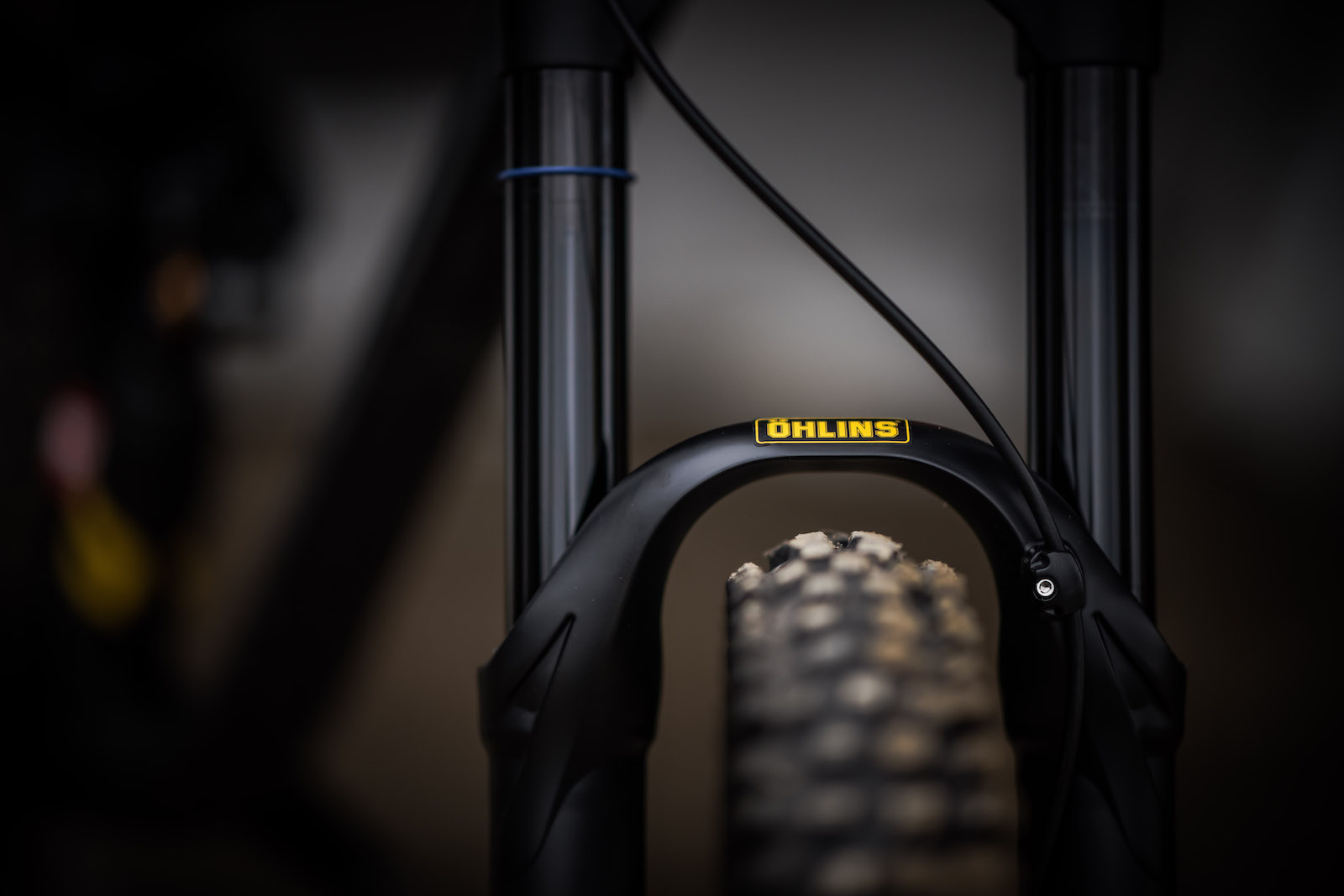 The RXF 36 Trail with air cartridge is available in a range of travel, ranging from 120 to 180mm while the spring version options range from 130 to 170mm, regardless of preload. 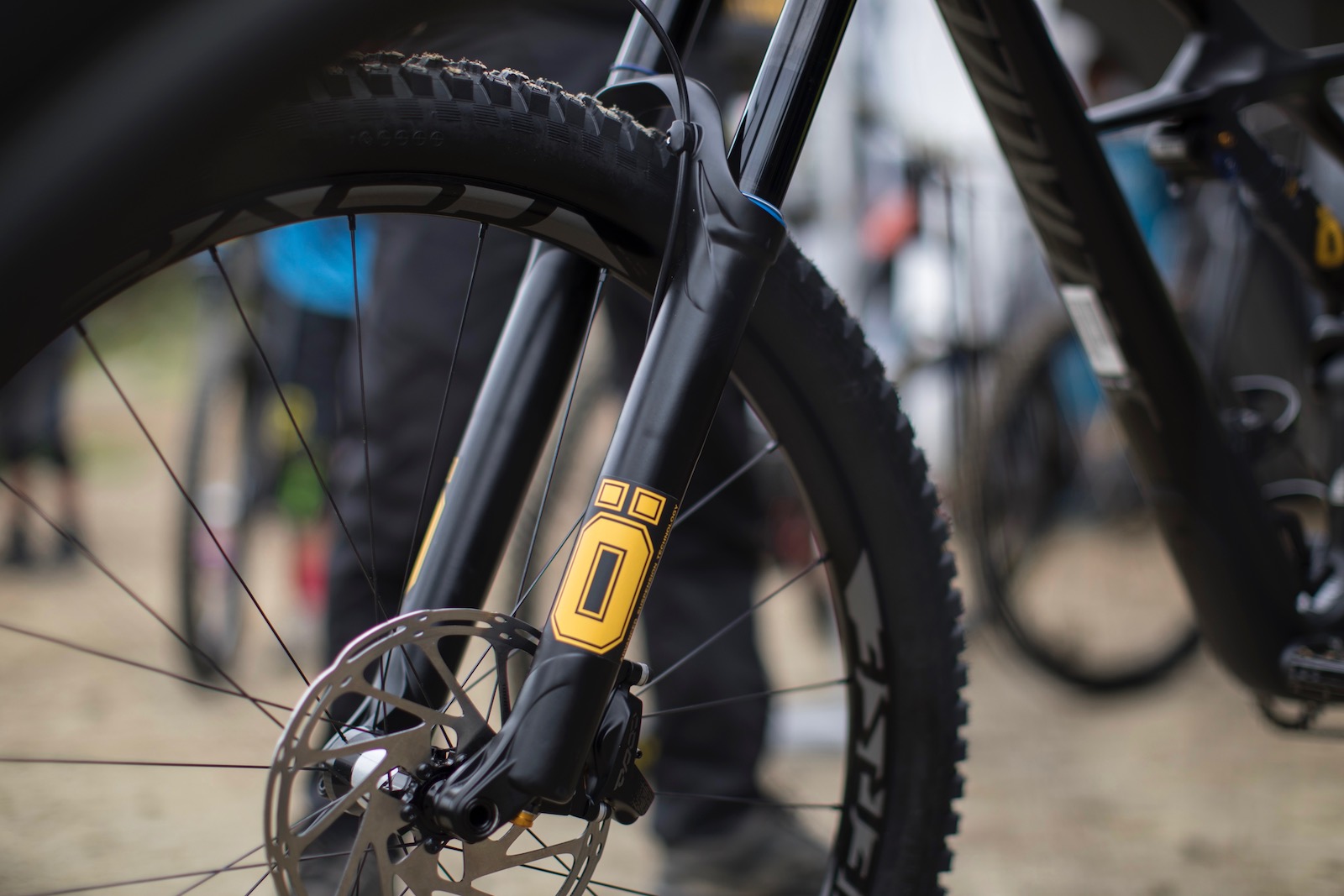 The steerer tube/crown has been redesigned to ensure greater stiffness, thanks to increased purchase between the crown and steerer. According to Öhlins, it has the same rigidity as the first version of the RXF series, where the steerer tube and crown were made of one piece. 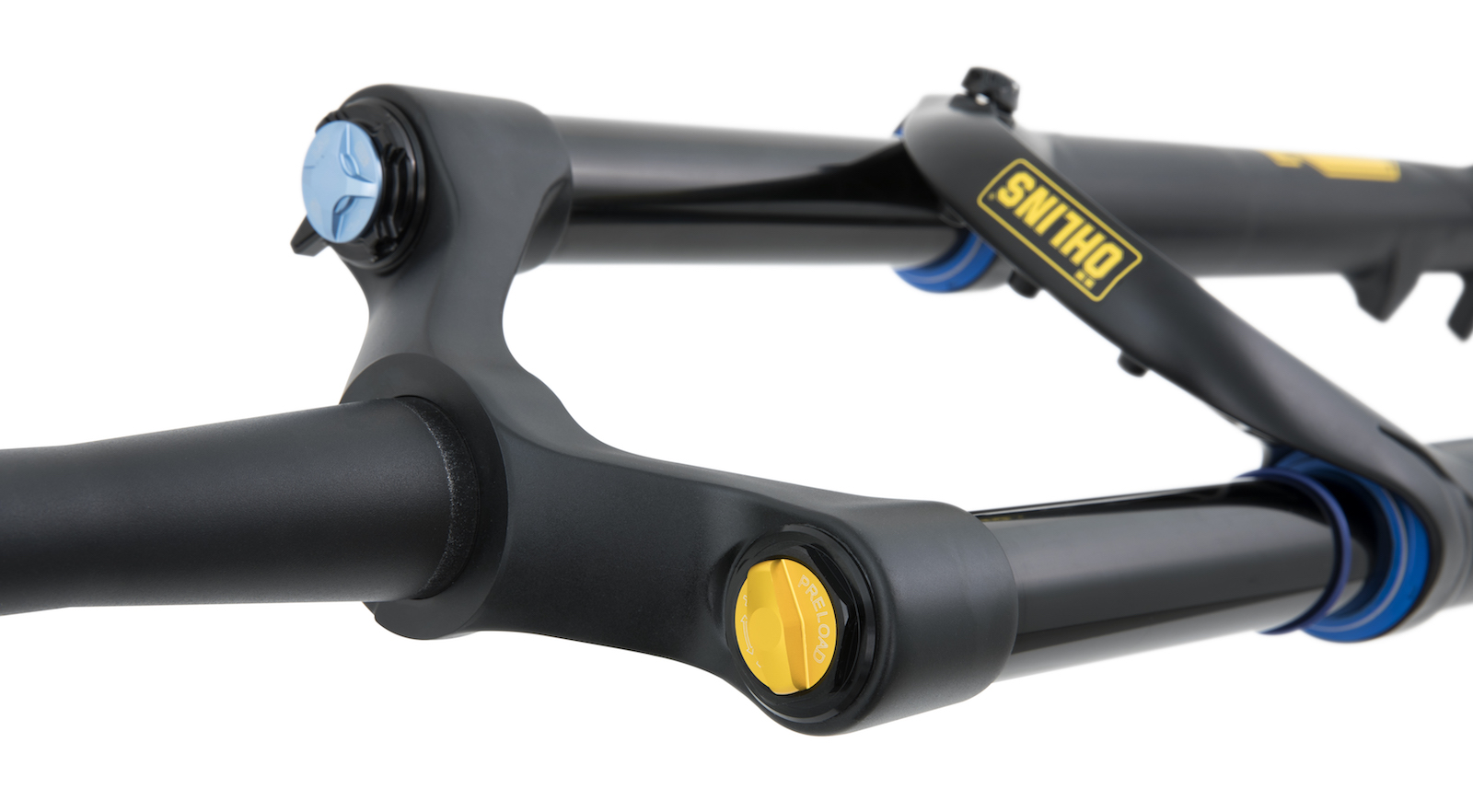 The crown/steerer offers different offset options, to meet current market demands including the Speed ​​Balanced Geometry introduced by Transition. The 27.5 “version is available with an offset of 38 and 46mm while for the 29” version, the choice for offset is between 51 or 44mm. 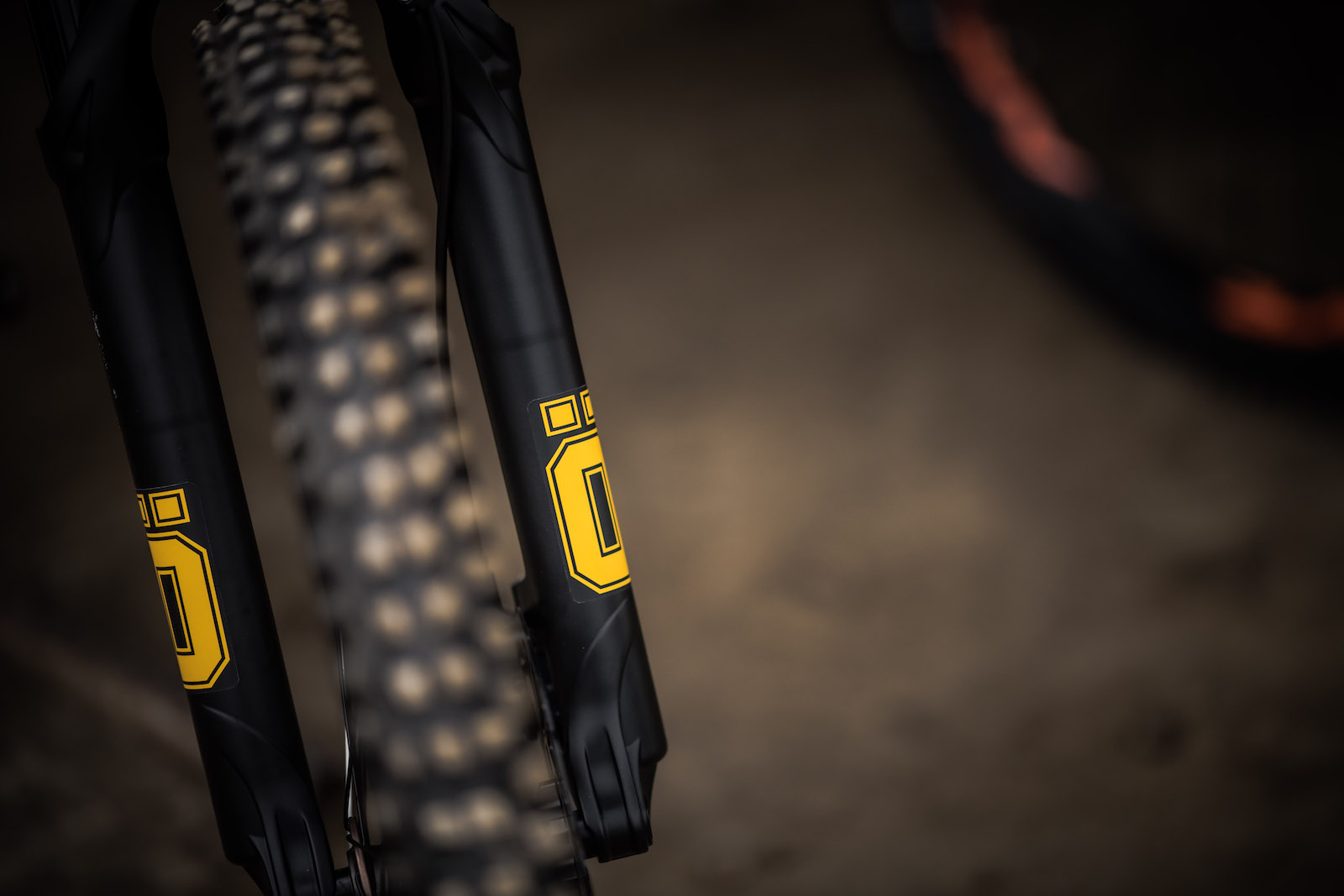 Within the lower leg assembly, we find some measures aimed at improving performance in terms of smoothness. SKF seals provide less friction and improve performance in wet conditions. The stanchions have a new surface treatment that reduces friction and wear. The bushings are internally polished to optimize smoothness and have had a fine tuning following numerous tests by Enduro and DH athletes.

Now for the heart of the RXF 36 Trail fork, the new TTX 18 hydraulic cartridge comes from the new DH fork and replaces the previous TTX 22 cartridge. As the name implies, the new cartridge has a piston diameter of 18mm combined with a shaft that remains the same diameter as the previous cartridge, so the different proportion determines a more progressive behavior, with a greater initial sensitivity and a greater support. 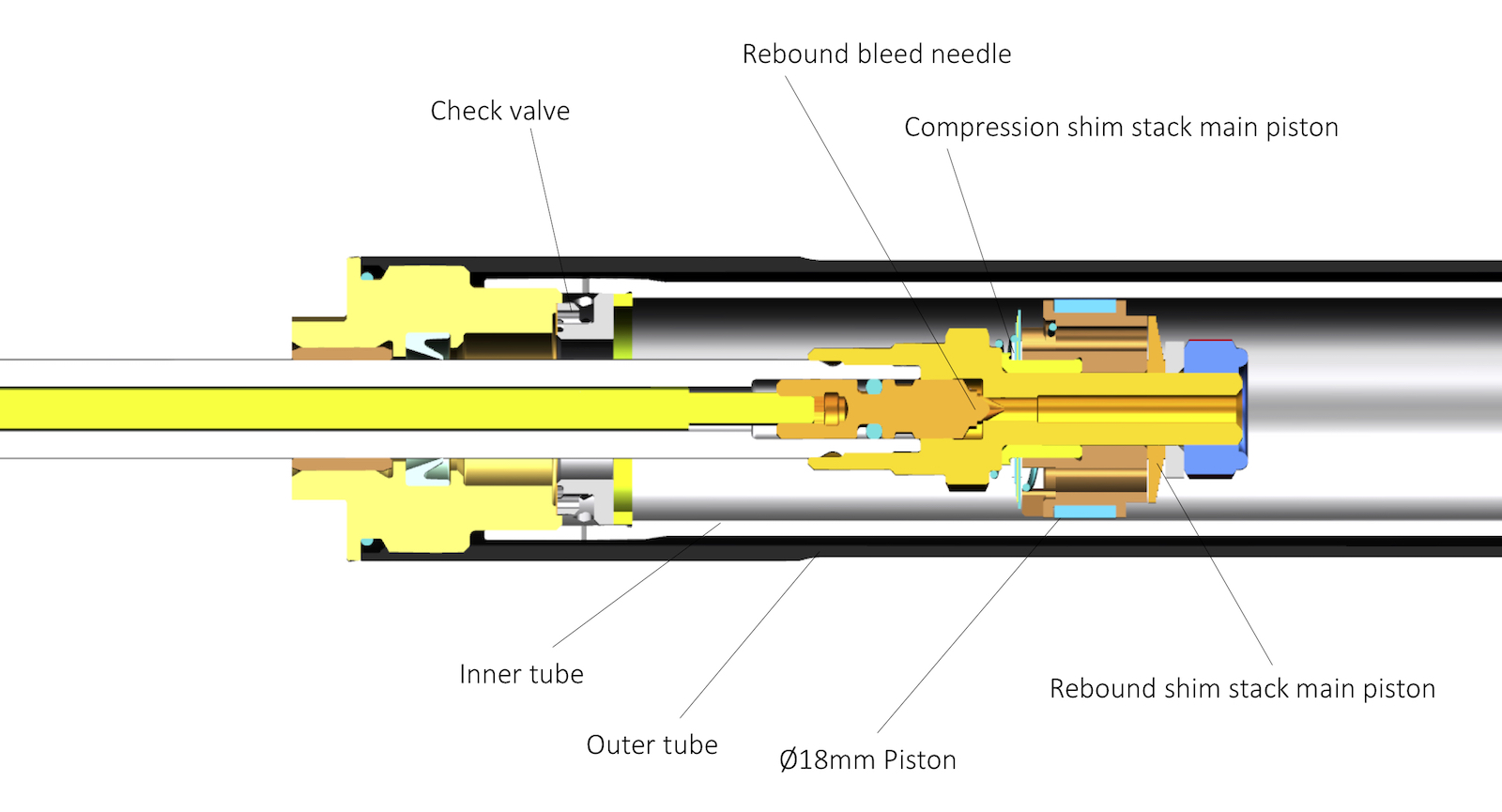 The piston is also equipped with a new band ring, which ensures better operation of the cartridge,  improving sensitivity and responsiveness of the fork. The operation of the TTX 18 cartridge is customizable both in compression and in extension by setting the reed valve at the authorized Öhlins centers, or local service centers. 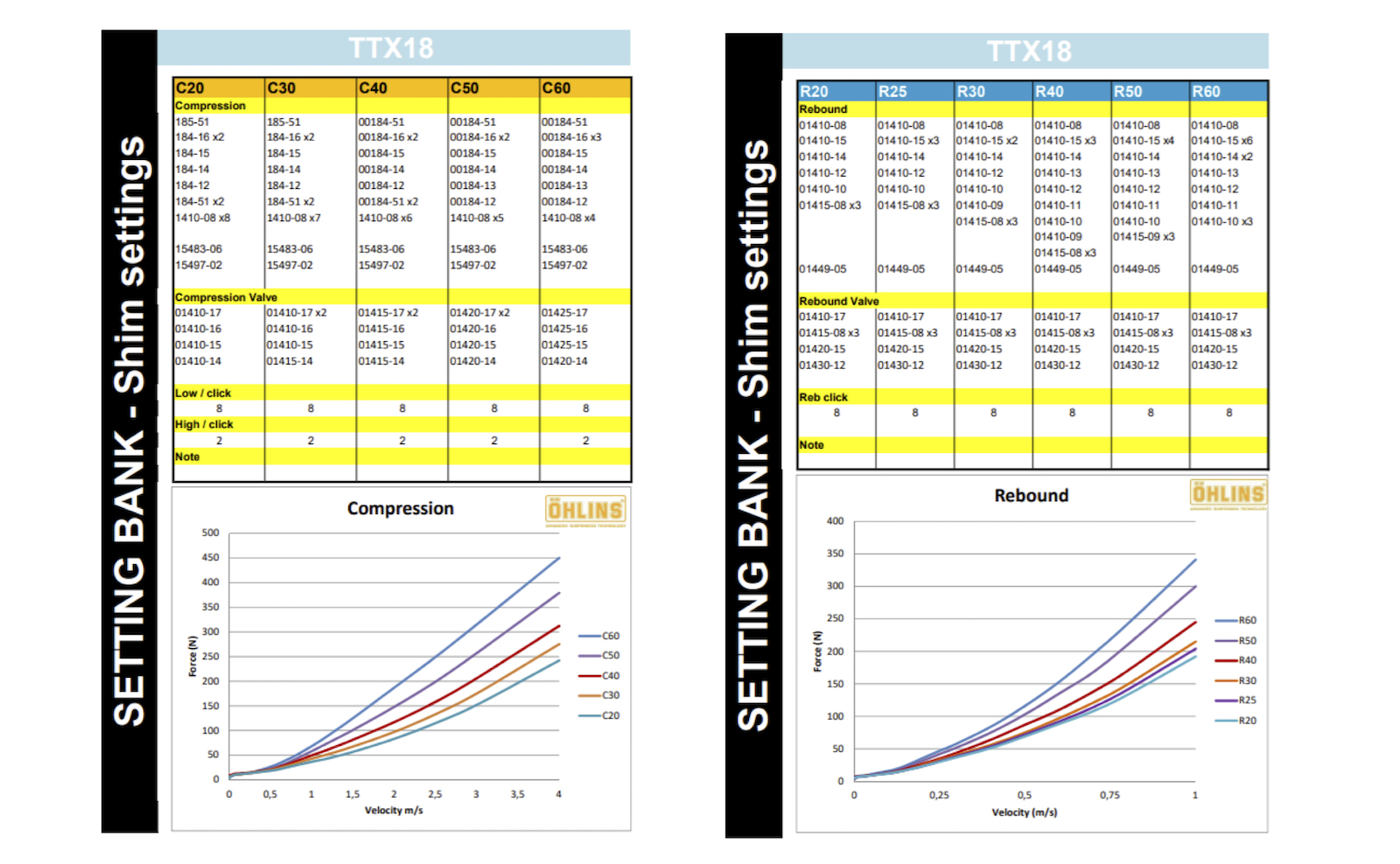 The RXF 36 Trail has three means of external hydraulic adjustment: 15 clicks of rebound, 15 clicks of low speed compression, and at high speed compression, five positions – by way of an easy access lever that offers four positions dedicated to descending and the fifth, and firmest, dedicated to climbing. The range of each click is calibrated according to the actual needs of use so it is fully usable without “extreme” positions that would remain untouched. 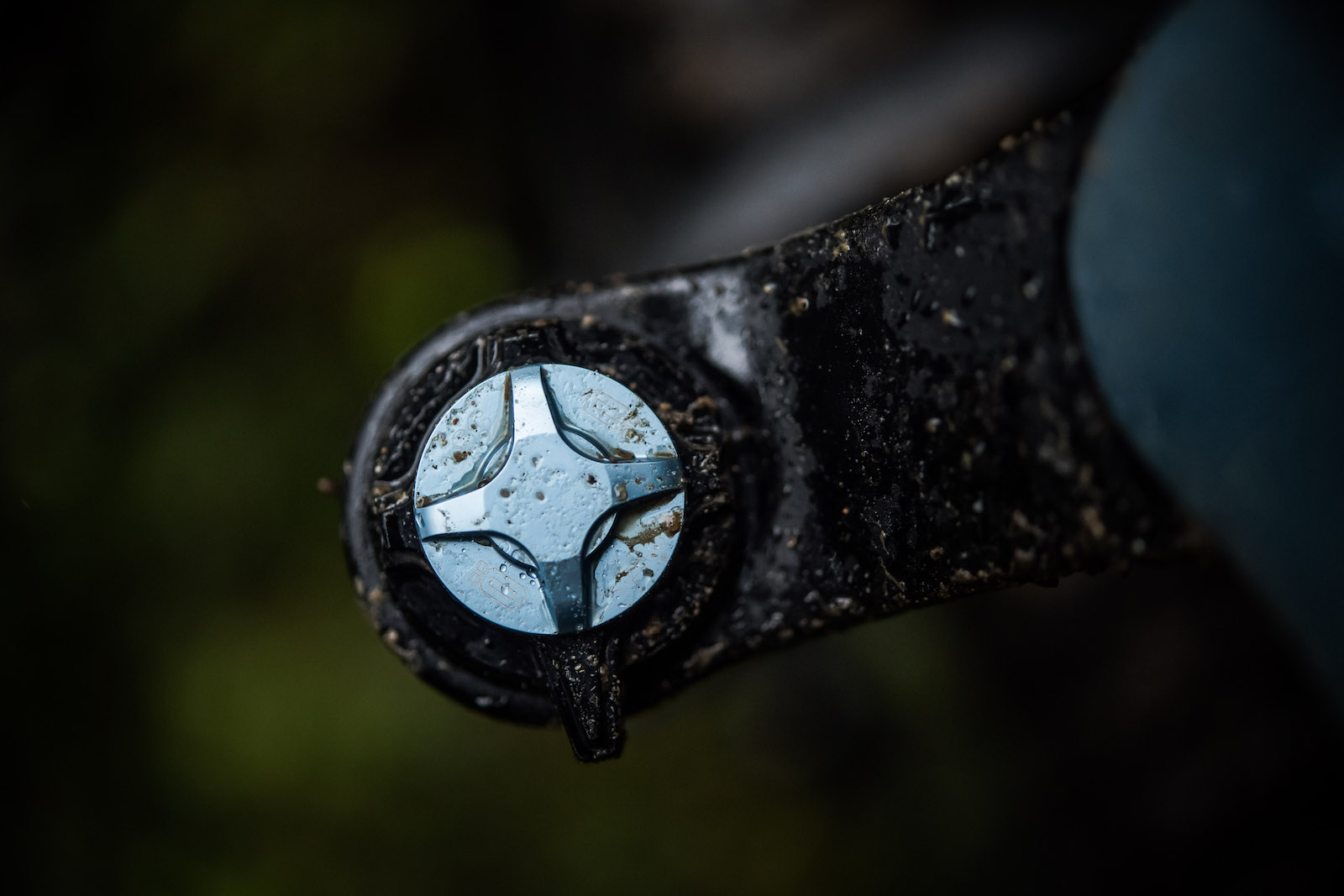 The air spring cartridge retains the three-chamber system of the previous model, with the positive chamber and the negative chamber inflating from the same valve and automatically equalizing, while the chamber dedicated to the bottom out inflates by means of a special valve positioned below the right leg and allows you to adjust the progressiveness of the bottom of the stroke. Compared to the previous cartridge, the volume of the negative chamber has been increased. The new RXF 36 Trail in the Coil version is equipped with high-strength steel springs that offer a 10% lower weight compared to the same rates of the previous version. The range of springs available has also been increased so that each rider can find the right one for his weight and riding style. Thanks to an external adjuster, it is possible to fine tune the spring’s preload.

There is some big news also in the realm of shock absorbers for the Swedish brand with the TTX Air – an entirely new high performance unit that replaces the current STX22. The TTX Air inherits the proven Twin Tube hydraulic system from the prestigious TTX-22M spring-loaded “big brother”, a detail that already shows a clear evolution compared to the STX22.

Öhlins technicians have worked hard to offer a performance air shock adapted to the TTX hydraulics. Based on the experience gained from the STX22 and taking advantage of the greater space available thanks to the metric sizing, they worked together on four key points closely related to each other: smoothness, performance, durability and lateral stiffness. The result is a shock absorber with a wide range of use, from trail to DH. 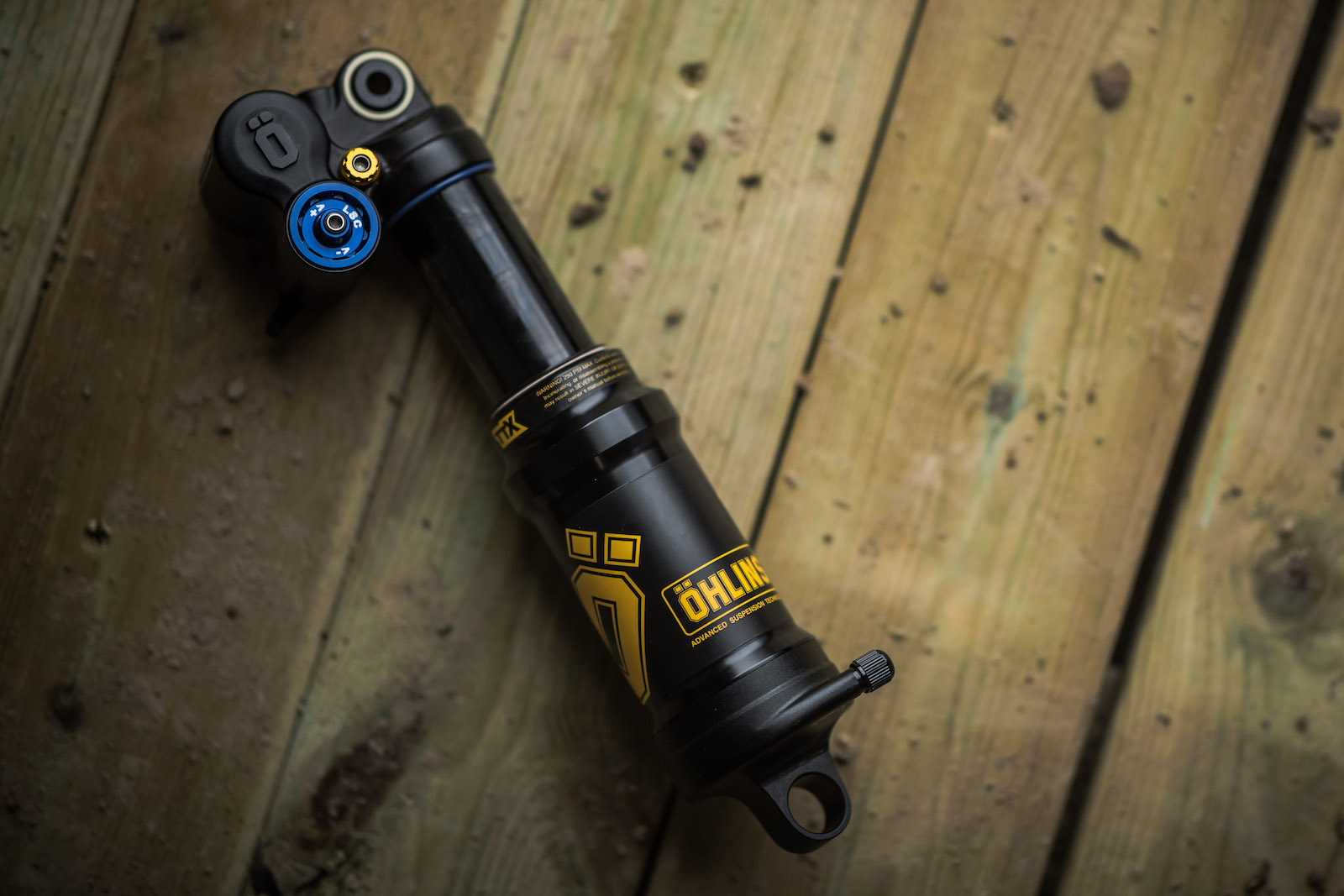 To satisfy these four points, a lot of work has focused on the choice of the best dynamic seals produced by Swedish brand, Trelleborg, with improved tolerances, and a special grease that maintains a high level of performance for a long time, leaving a lasting lubrication film on the moving parts. Another important aspect on which engineers have improved concerns the volume of air chambers, both positive and negative, and their reciprocal proportions. 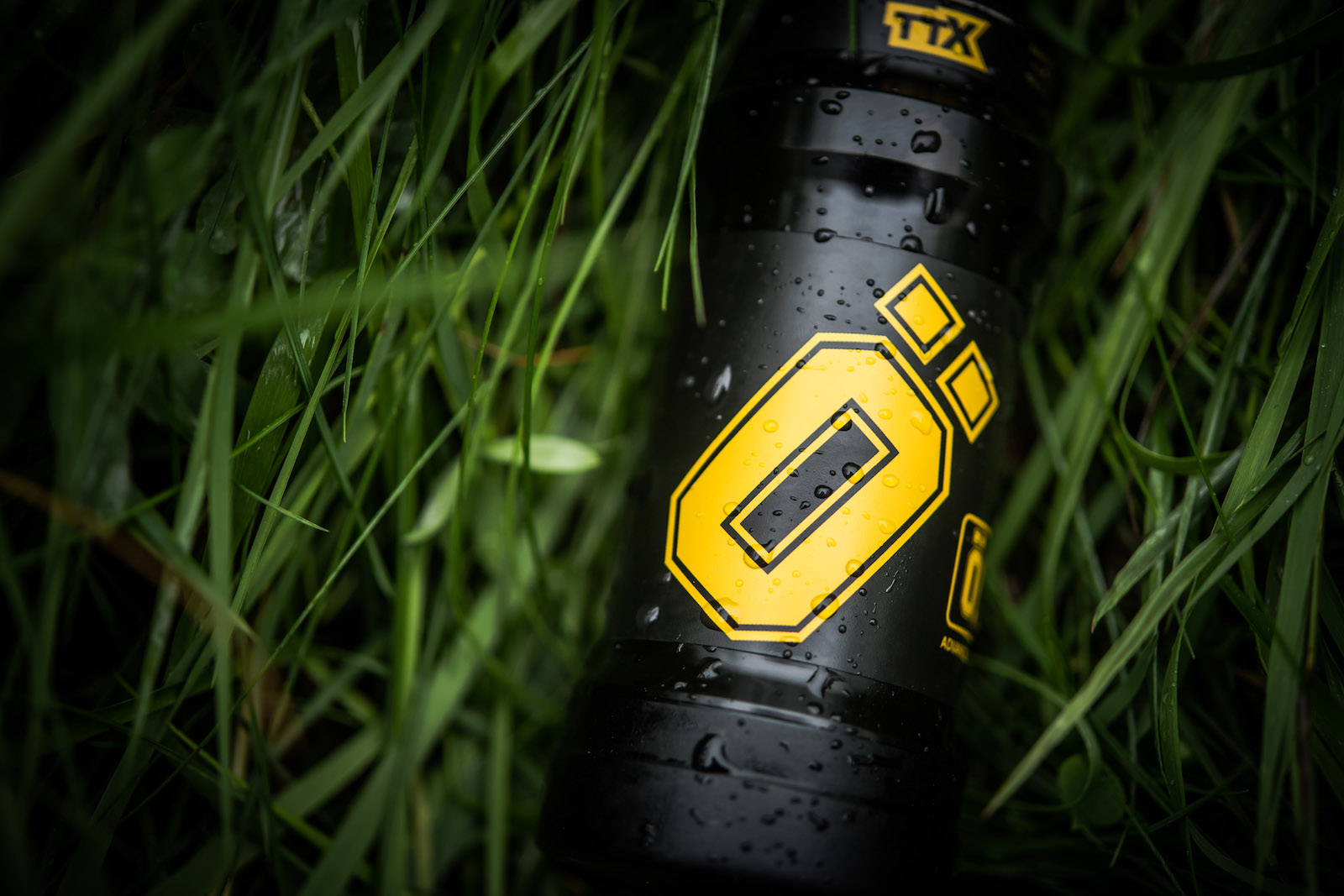 As for the positive chamber, Öhlins offers volume spacers to manage the compression curve. In the TTX Air there are five of them installed and can be reduced or increased with those supplied in the package, up to a maximum of nine spacers, for a total of ten different configurations. Inserting or removing the spacers, or performing maintenance on the air spring, is very simple and does not involve any intervention of the hydraulic parts. 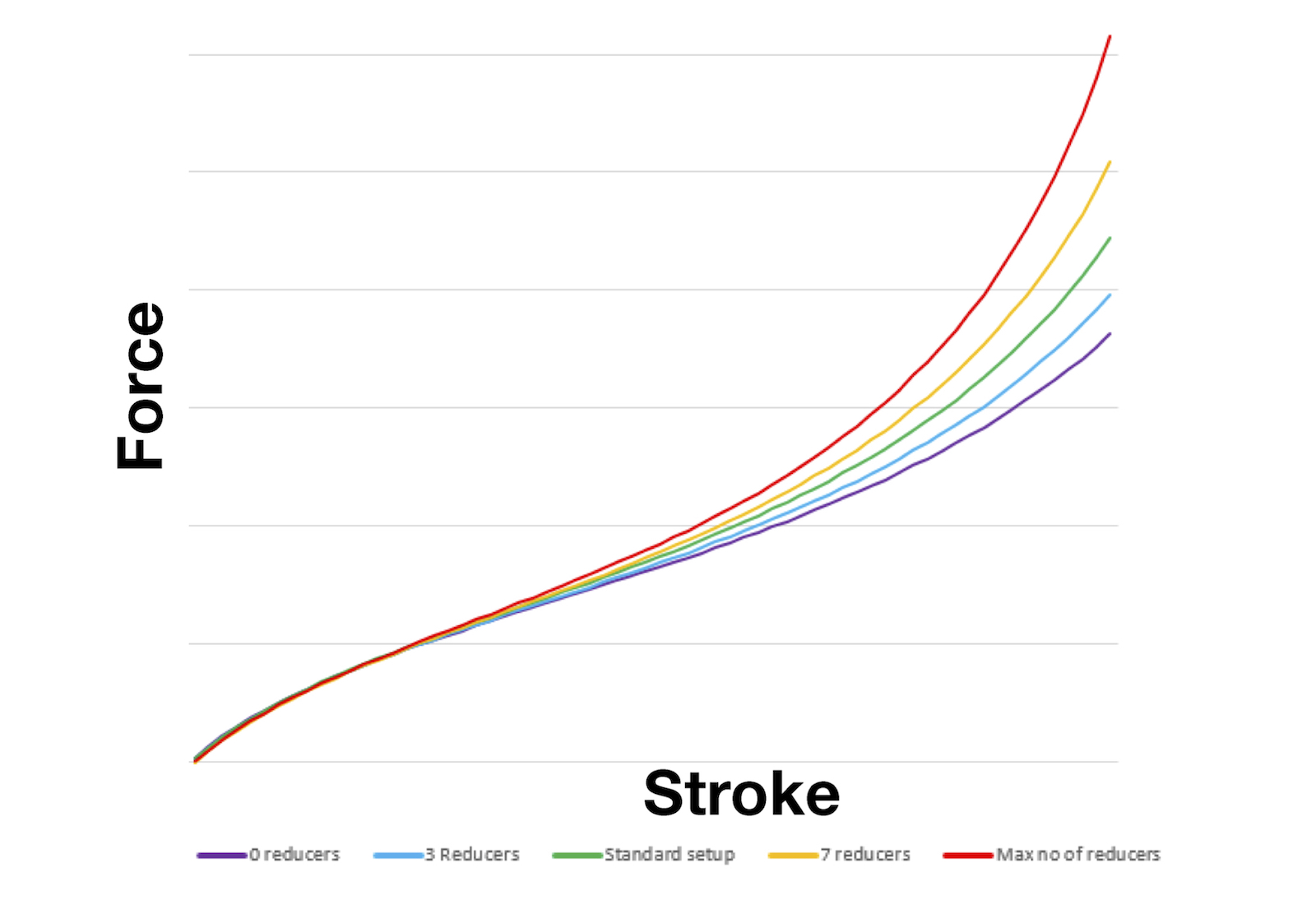 The compression adjusters at low speed and rebound are located on the opposite side of the STX22 and require an Allen key for adjustment. The LSC register allows a range of 10 positions. The register in rebound instead offers 12 positions. On the other side of the piggy back you’ll find the lever that allows you to adjust the high speed compression between 3 preset positions. 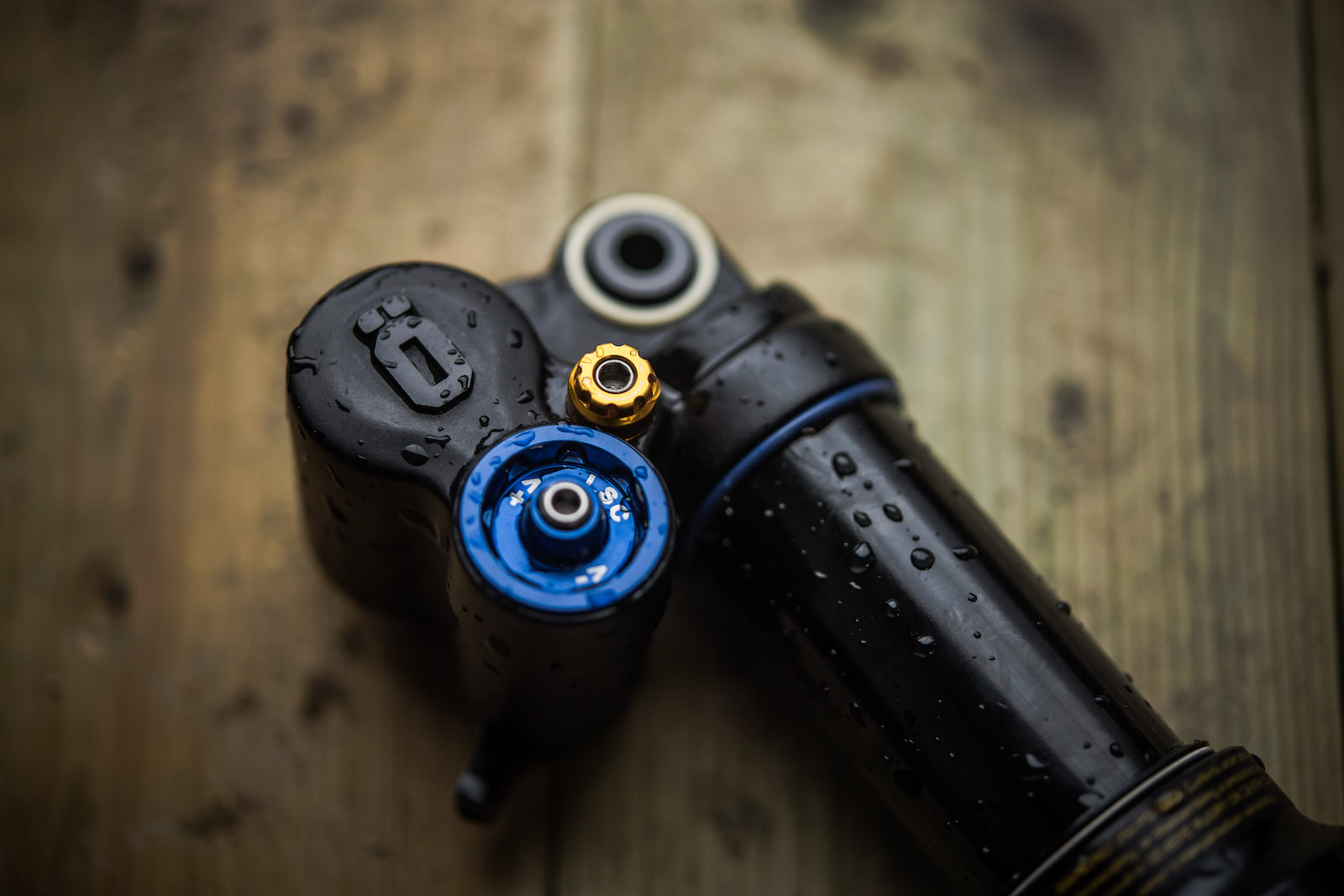 Position 2 is the configuration recommended by Öhlins for maximum support and the best reactivity from the shock, especially in the racing arena or wherever you want to squeeze out the best performance on mixed terrain. Position 1, on the other hand, reduces damping and is recommended for very rough and fast terrain, to improve shock absorption and wheel grip on the ground. The third position is called P and offers the most damping of the shock absorber for climbing. This is not a lockout, but instead a stabilization that still allows for the shock to open up when you encounter rough terrain on the climbs. 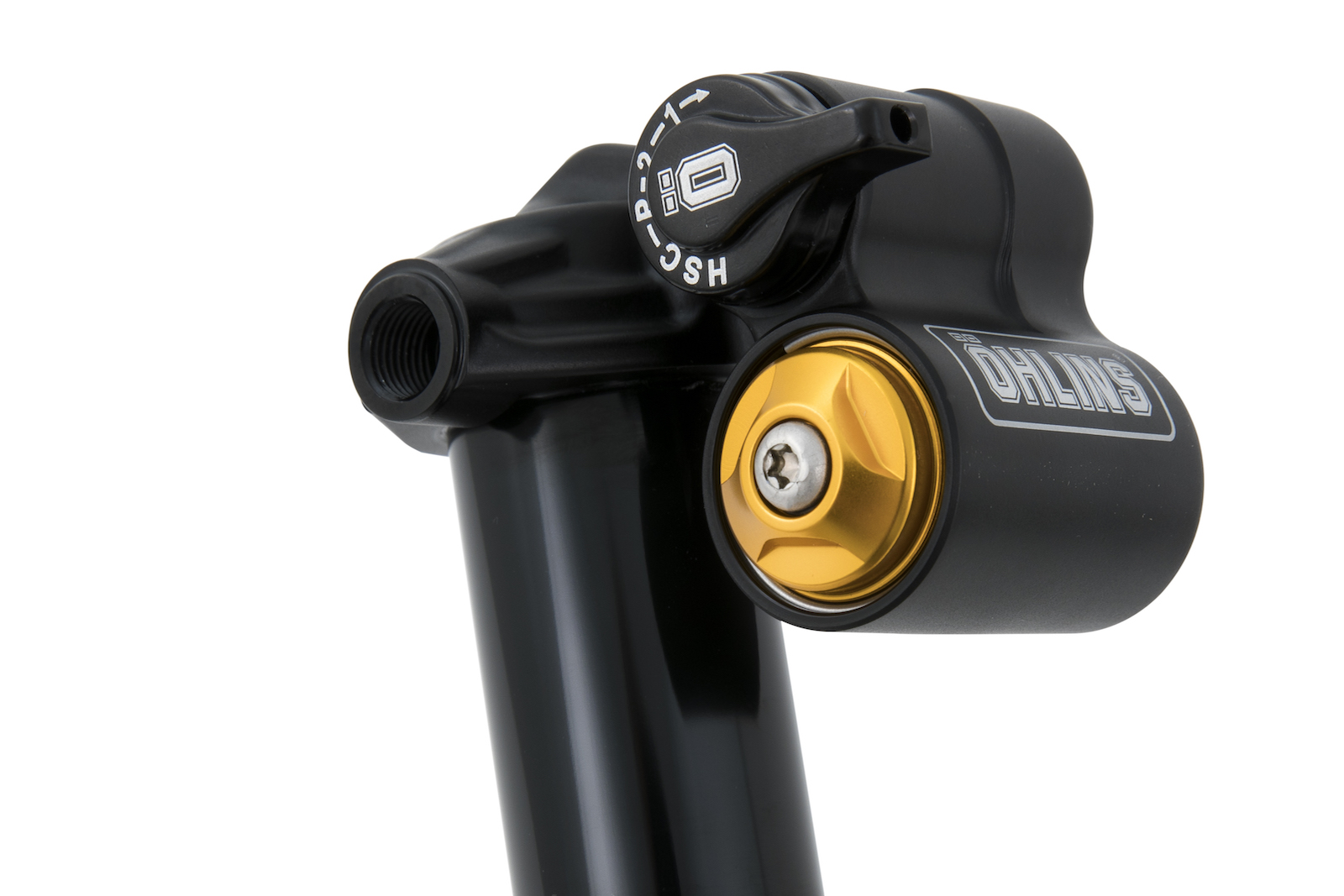 The TTX is available in eight different lengths, four of them in the trunnion version. For each length version, thanks to special spacers, there are four stroke options with a 2.5mm difference between each option. The hydraulics offer the possibility of being calibrated specifically, both in compression and in extension, according to the suspension system on which the TTX Air will be used as well as according to the rider’s weight/style. As anticipated, the Järvsö bike park, in spite of lacking elevation compared to the bike parks we are used to in the Alps, offers numerous tracks with different characteristics and difficulties, from jumps and berms to technical DH full of rock gardens. The compact, sandy soil perfectly drained the rain that fell during the test day, allowing us to get some solid time testing the new Öhlins suspension. The Specialized Enduro 29 I used was fitted with a TTX Air shock absorber and a RXF 36 Trail 29 Coil fork, set up with the most suitable possible spring for my weight. To be more precise, my weight falls between two springs, then, recommended by Öhlins technicians, I opted for the harder of the two without any preload, to have my fork sit up in its travel a bit better. However, I was able to appreciate excellent initial sensitivity and perfect fluidity throughout the travel, with a very balanced compression curve, supported at the center and slightly progressive in the final part. I tried to dabble with low speed compression, and deviate from the 7 clicks from full open that was recommended by Öhlins technicians. As it would turn out, their setting was perfect for the bike park in Järvsö, but I noticed the slight changes were effective at every click. Regarding the speed of the return I preferred to reduce the damping by two clicks compared to the initial setting to get a more lively suspension that was better balanced with the behavior of the shock, noticing an improvement of the front end grip, especially in the corners with braking bumps and in jank. For high-speed compression I instead mainly used the first three positions according to the type of trails, while the last two positions with heavier damping are more suitable for climbing. The structural rigidity of the fork is remarkable its handling is precise and intuitive, making me further appreciate the lively and full-bodied behavior of the hydraulics, noticing an improvement in the grip of the front axle, especially in the rough turns. For high-speed compression I have instead mainly used the first three positions according to the type of routes, while the last two positions with greater braking are more suitable for climbing.

The TTX Air shock absorber was sensitive and lively, with performance attributes comparable to those of an excellent coil sprung shock absorber. The liveliness was also appreciated in the transition from the compression phase into the extension, absolutely immediate and imperceptible, devoid of any stall. Effective hydraulics allow you to keep a very low damping in rebound and enjoy maximum responsiveness without the bike getting tired or nervous. I mainly used position 2 of the high speed compression adjuster, moving the lever to position 1 exclusively for very rough tracks. In position 2 the shock absorber was pleasantly supportive and felt most effective at providing mid travel support while still having plenty of sensitivity and absorption capacity. That gave a balanced mix that helped keep the geometry of the bike neutral in every riding situation. In position 1 the absorption capacity increases both on the important impacts and on the bumps in rapid succession, slightly to the detriment of the stability and the balancing of the geometries, so I compensated with an extra click at low speed with good results. The few hundred meters in altitude of the Järvsö bike park are certainly not the best yardstick for this factor, but it should be emphasized that at the end of the descent the shock had never shown signs of overheating. Stay tuned for a full review of the new Öhlins products that will be sent to us shortly for a more thorough and exhaustive test.