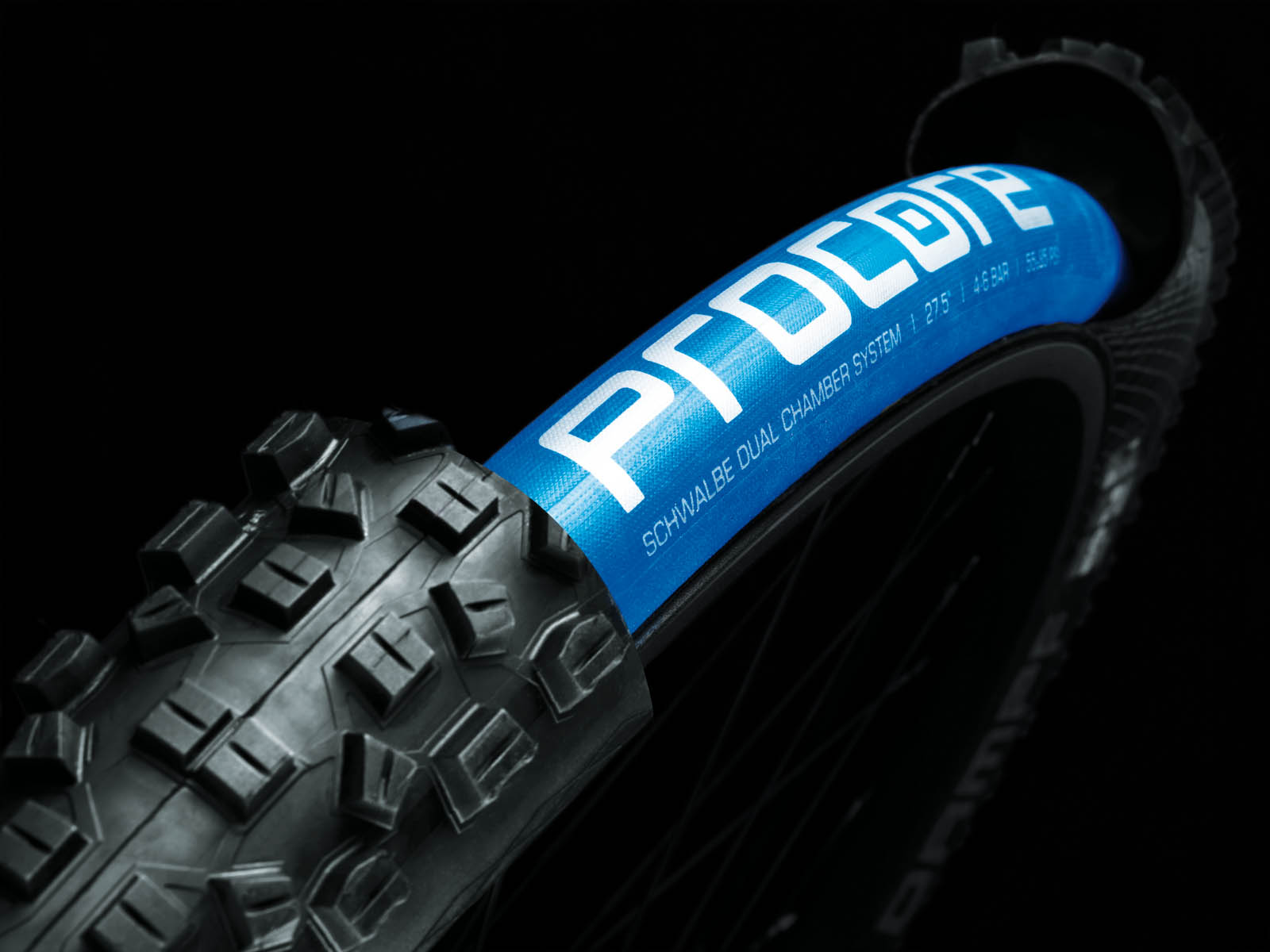 We recently had the opportunity to ride the Schwalbe Procore dual chamber system for a couple of days in Davos, Switzerland during the Scott 2015 product launch, on a brand new Genius LT Tuned, with Syncros alloy rims and Schwalbe Hans Dampf 2.4″ tires.

Right now Schwalbe is going through the patenting process, that’s the reason why you will not see any photos detailing the internal chamber until Eurobike, when the Procore will be officially released. We also are not able to divulge any info regarding the installation of the system on the rim, but Schwalbe said it should be rather easy.

The principle is rather simple: a 60-90 PSI (4 to 6 bar) high pressure chamber is inserted in the tubeless tire. The chamber, when inflated, does not touch the tire, creating a second “chamber” that will be inflated at a pressure between 12-23 PSI (0.8 and 1.6 bar). 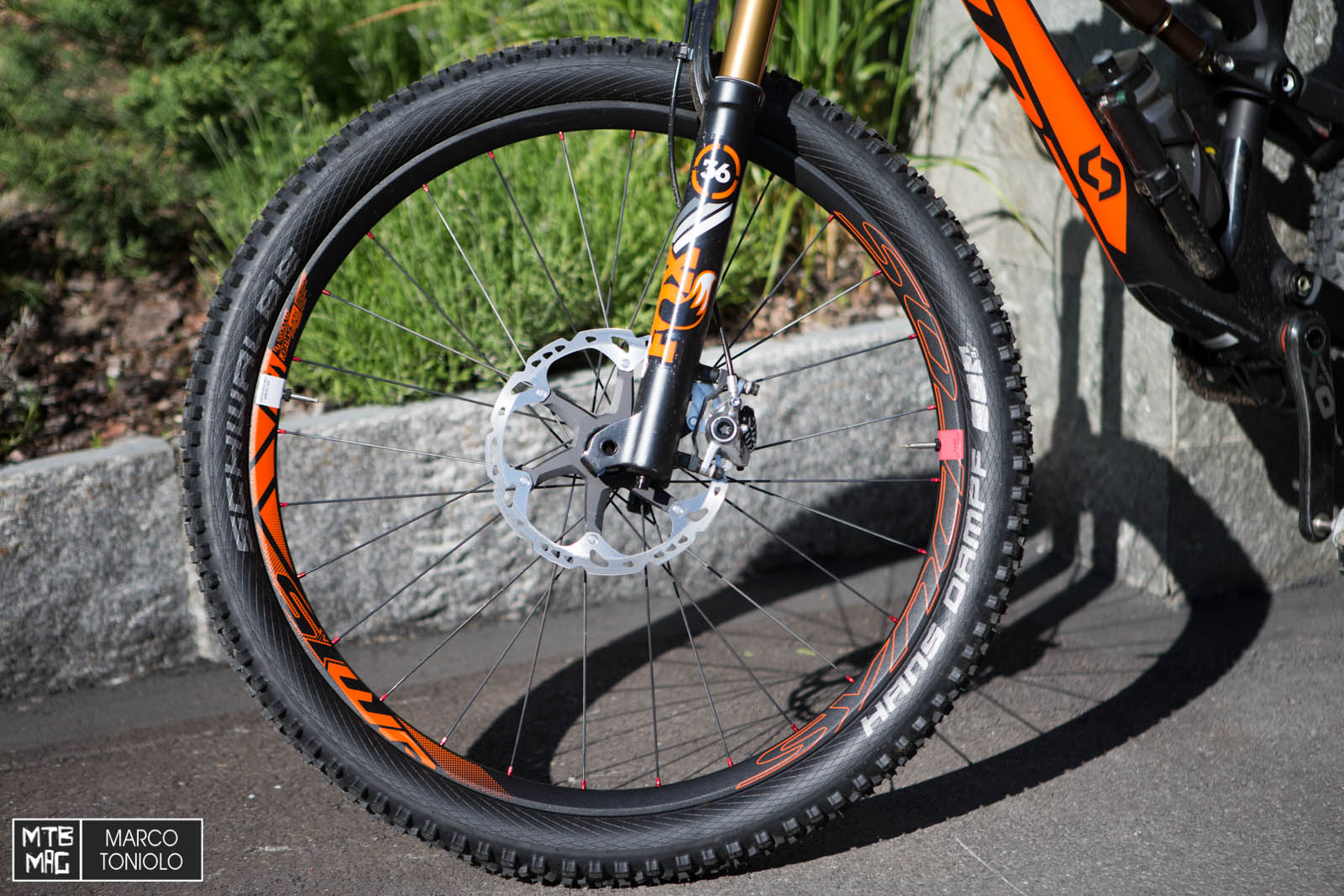 Procore can be installed on most alloys rim already on the market.  Installation is as simple as drilling a hole for the second air valve. There are no structural issues doing that, even DT Swiss (that produces also the Syncros rims) gave the green light in terms of strength. This does not apply to carbon rims, where drilling a hole could damage the carbon fiber and significantly compromise the integrity of the rim. The second hole can be drilled in two spots: very close to the first hole, or on the opposite side of the rime. The second solution guarantees higher structural stability and a better feeling at high speeds.

The minimum internal rim width is 23mm.  Anything narrower and Procore would not have enough surface area to get a proper seal and installation.  The system weighs 200 grams and it will available for 26″, 27.5″ and 29″ wheels. It’s not a Schwalbe specific product: you can simply use your tried and true go to tireset or opt for Schwalbes if you choose. The tire just has to be tubeless ready and it must be sealed with some sealant product. The price will be released at Eurobike and the system will be available in shops at the end of 2014. 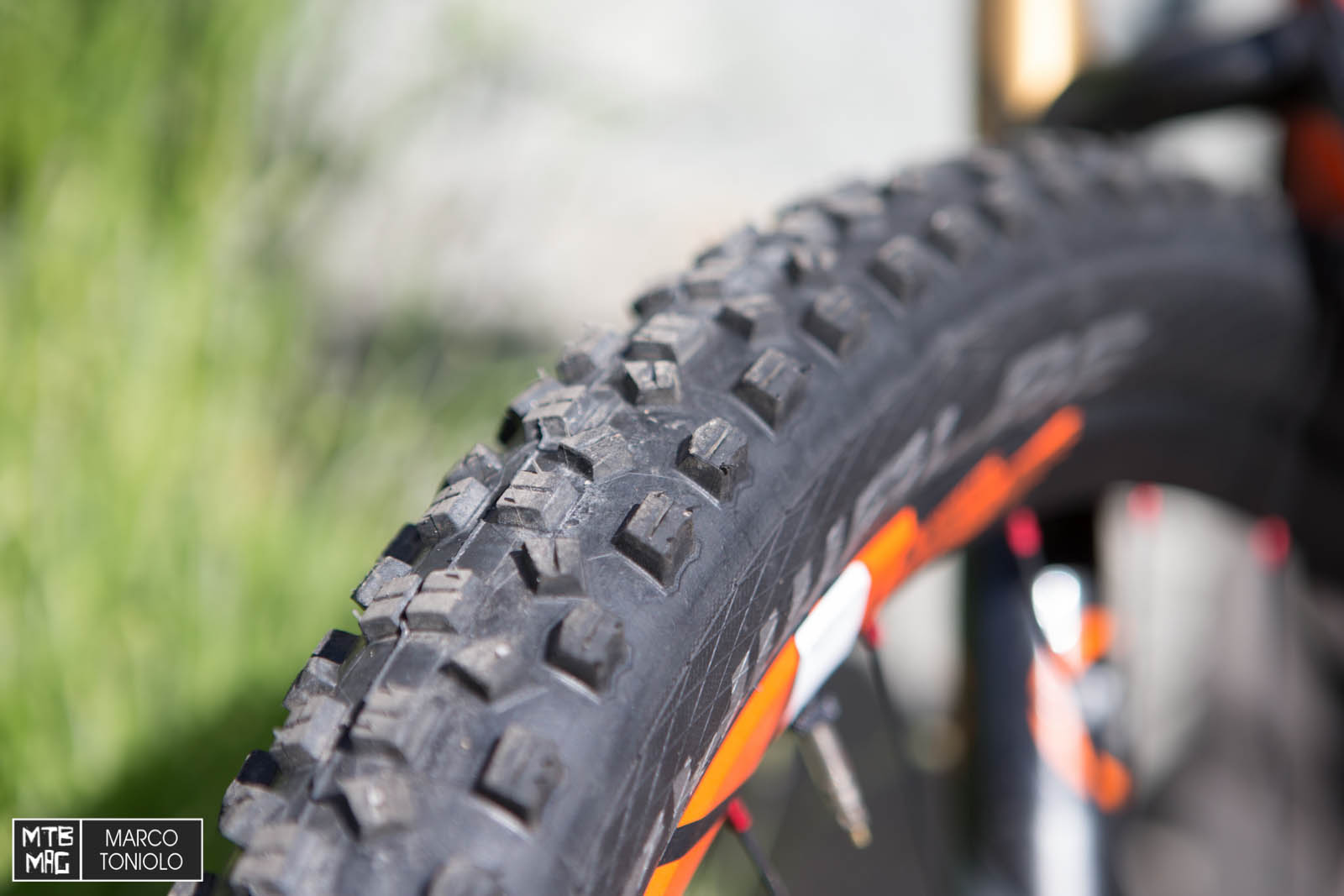 Schwalbe says that if the tire has a flat, it is still possible to continue riding, even if the tire performance will be much lower than normal. The inner chamber will support the deflated tire and the system prevents burping. Also in the even that the inner chamber fails (for example a puncture from a long nail), you can still fix the tire by installing in a normal tube. 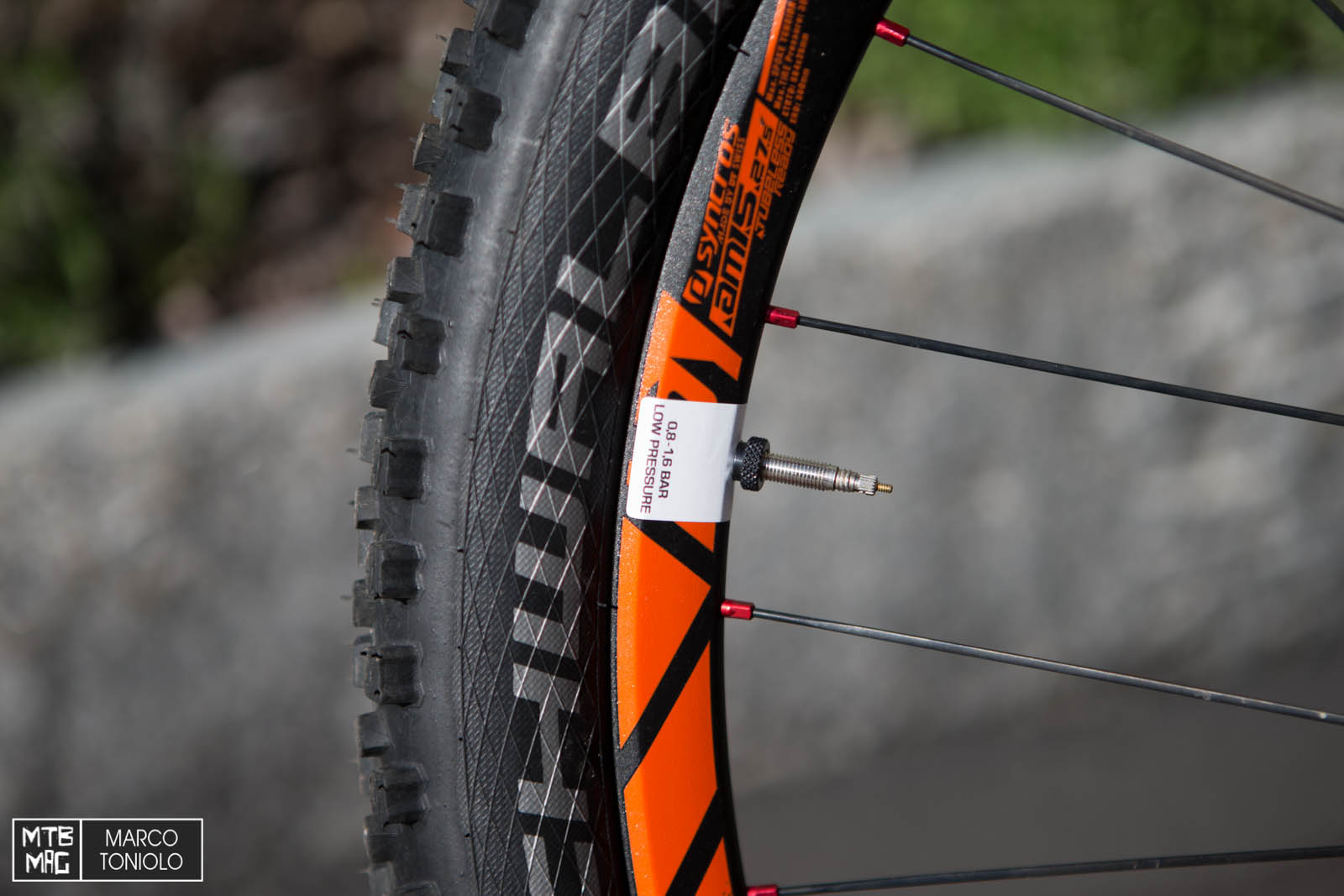 The main goal of the Procore system is to allow riding at low pressures without burping or damaging the rim. A tire pressure of 17 PSI(1.2 bar) is not comparable to the same pressure of a tubeless tire or that of a classic tubed system, because the pressure refers to the “second chamber” only, which is smaller than the high pressure chamber.  This means that only about one centimeter of the tire will be at low pressure, giving tons of grip and traction. As soon as an impact goes through this centimeter, the high pressure chamber prevents the tire from bottoming out and it offers a consistent trail feel.  It is similar to a progressive suspension curve that ramps up as it gets deeper into its travel.

The Schwalbe Procore system has been tested and used by some pros during the 2014 DH world cup, like Emmeline Ragot, who won on it at Fort William, as well as Loic Bruni. It allows the riders to use lighter tires, saving about 50 grams of weight each tire system. 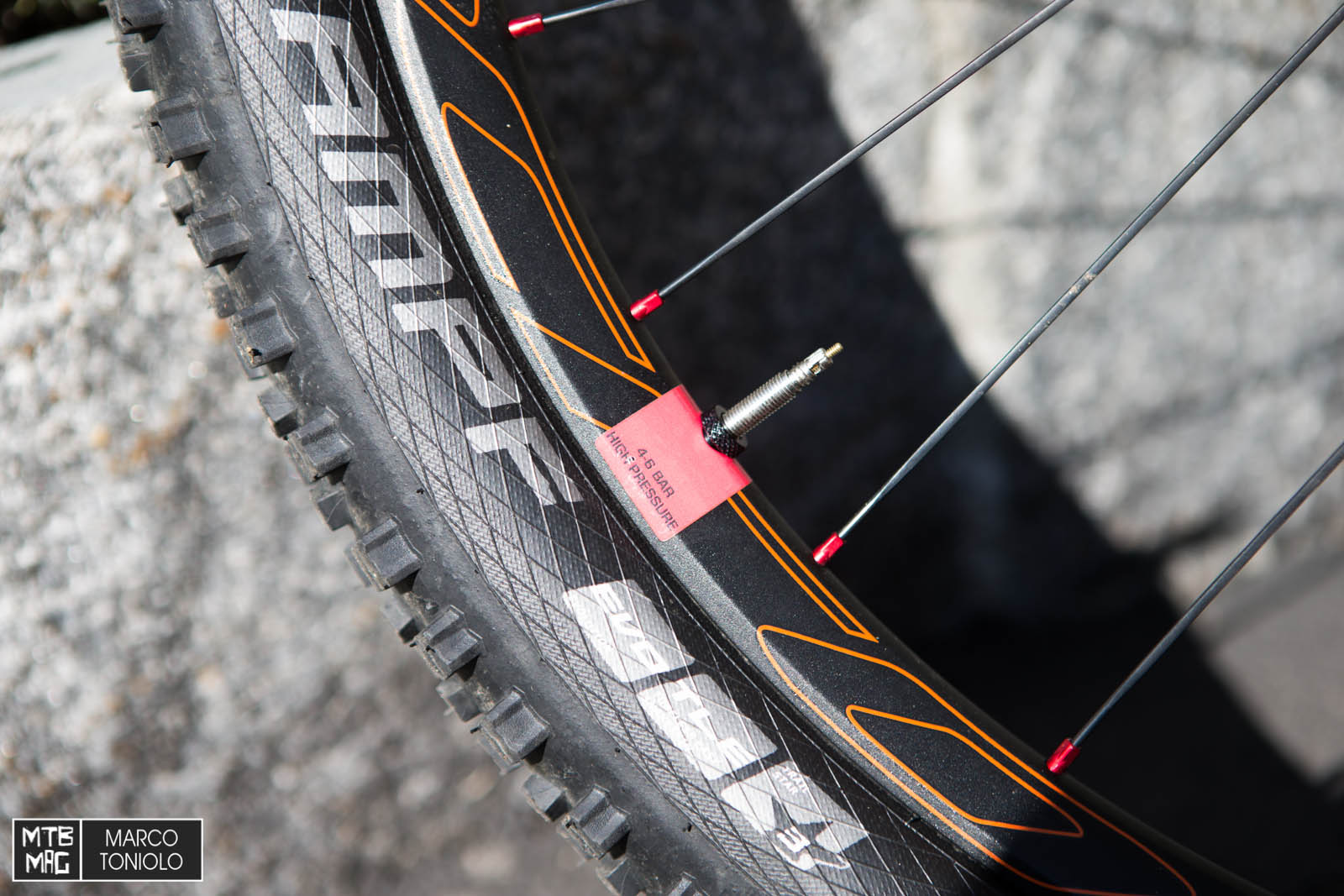 We used this tire pressures during the test rides:

During the first day we rode some singletrack with lots of up and downs, wet roots and many squared edge rocks. The traction of the Procore was amazing from our very first pedal strokes.  What surprised us was the way the tires rolled over small obstacles, literally letting them disappear before the suspension even started working. This made our bike feel much more “calm” and extremely easy to keep on the lines we chose to ride.

The amount of grip improved massively. It was quite impressive to watch the riders in front of us slipping on the wet roots and rock, while we were riding the same spots with no problem. 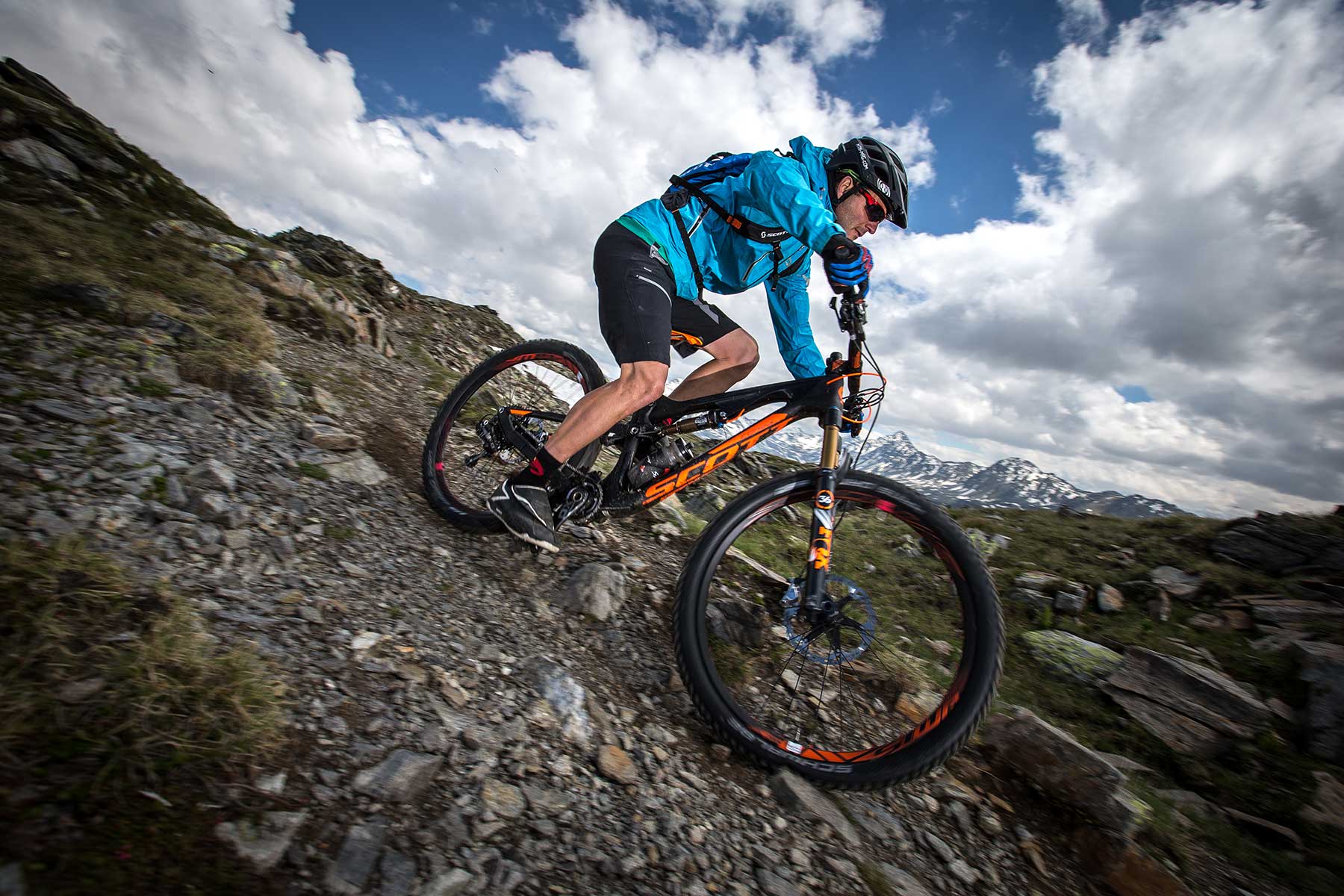 The second day had lots of trails going downhill, even though the day started with a tough climb on a singletrack. The traction is insane: the low pressure lets the tires take the form of the terrain we were riding on, allowing us to climb sections where the other riders where fighting for every bit of grip.

In terms of downhill performance, the headline could be “Who cares about the line?”. We could ride nearly everywhere, not caring about sharp rocks, off camber roots or loose gravel.  It was like riding a good downhill tire with very low pressure. Don’t get us wrong: the high pressure chamber keeps the tire “up in the travel” and we never had that “flat tire” feeling that scares every rider when approaching a fast turn or which needs all your energy for the uphill. In a sense it’s the best of both worlds: great traction, but a tire that doesn’t penalize the rider when trying to smash the uphills.  Most importantly, you don’t have to worry about burping whatsoever – a common concern with every tubeless system out there.

At the end of the day we rode down a steep, rocky and fast doubletrack.  The bike was super steady and the tires took care of all the small impacts and concern with surface traction.  Hairpin turns at the end of long straights on loose gravel was the ultimate test for braking traction – as expected, this system exceeded our expectations.  The Procore system offers a immense amounts of traction and in turn allows riders to brake a tiny bit later than normal.  Isn’t that what it’s all about?  Gear that allows us to elevate our riding…

The Schwalbe Procore dual chamber system is a game changer. It will improve your approach on a mountain bike, increase your cornering speed and offer tons of grip and traction that all kinds of riders, that XC racers and weekend warriors alike, will value.  Despite how excited we are about this new system, it is too early to judge the ease of installation and simplicity of trailside repairs if the system fails. We will keep you posted as soon as we put our hands on a test sample.

Between a rock and a hard place: the quest for Afghan singletrack