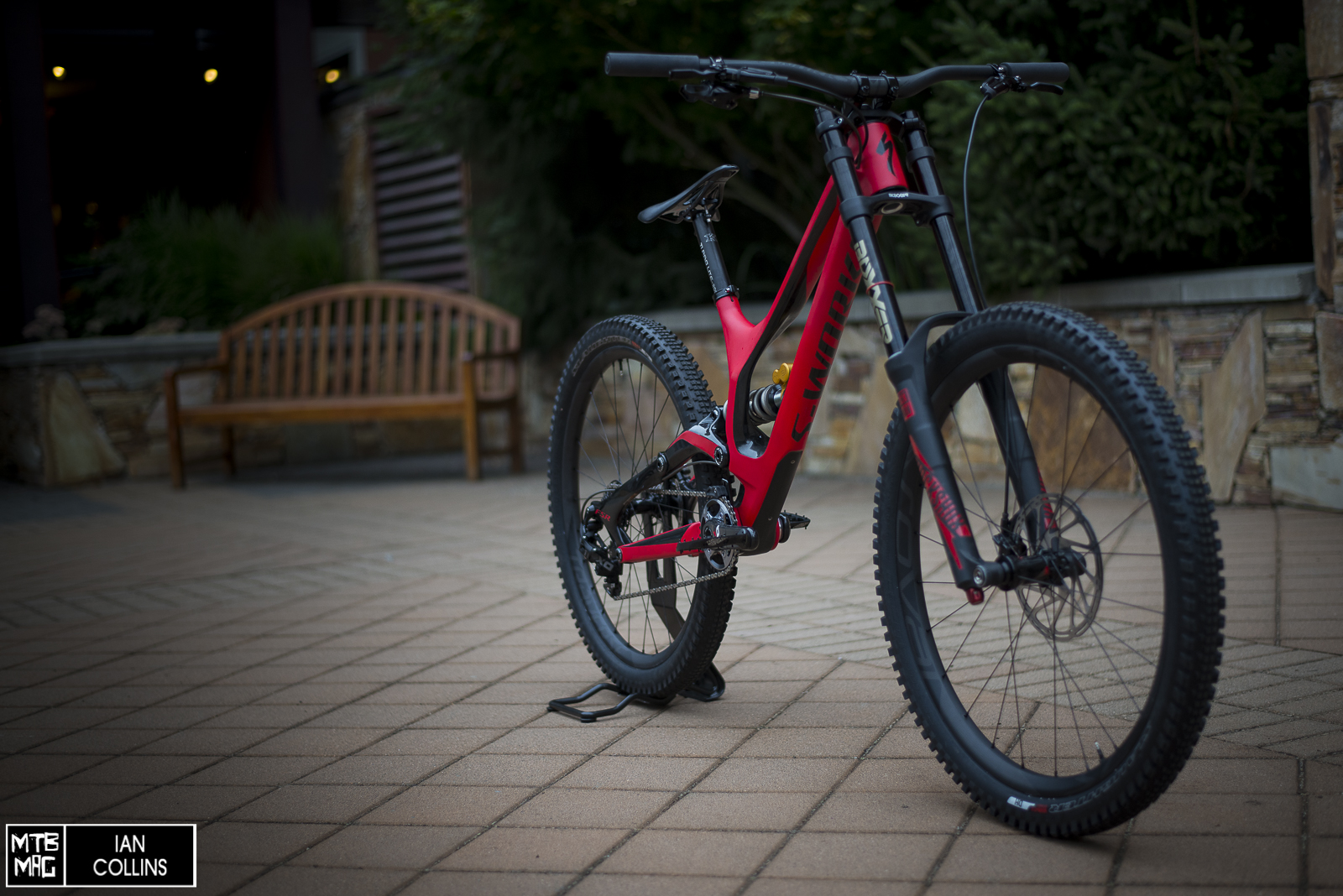 During Crankworx in Whistler, I had the fortunate opportunity to take a new Specialized Demo Carbon 27.5” bike out for a day and gather some thoughts on the bold, cutting edge new design. While one day certainly isn’t enough time to do a full length review on a complete DH bike, if there was any single place to ride for JUST one day and gather as much feedback as possible it would be in Whistler. 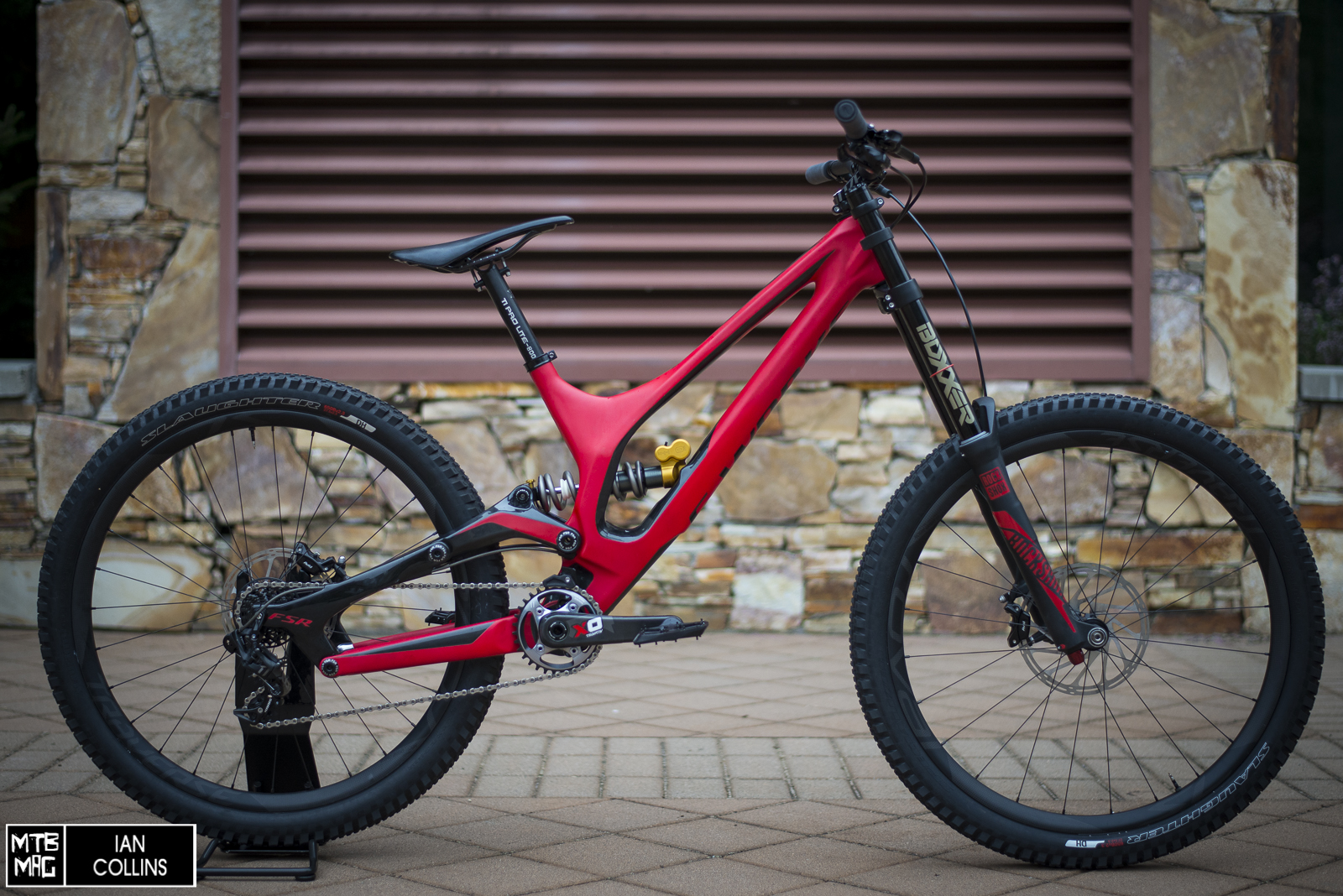 At 6′ tall, I was pretty dead set on riding a long. Why did I call it a long instead of a large? Specialized is making an attempt to stray away from traditional sizing with DH bikes and rather than call bikes small, medium, large they call them short, medium, long, x-long. It does make some sense really – they keep the standover really low and all the critical parameters(bb height, chainstay length, head angle) remain constant throughout all sizes. The only variable that changes dramatically between each size model is the top tube length. 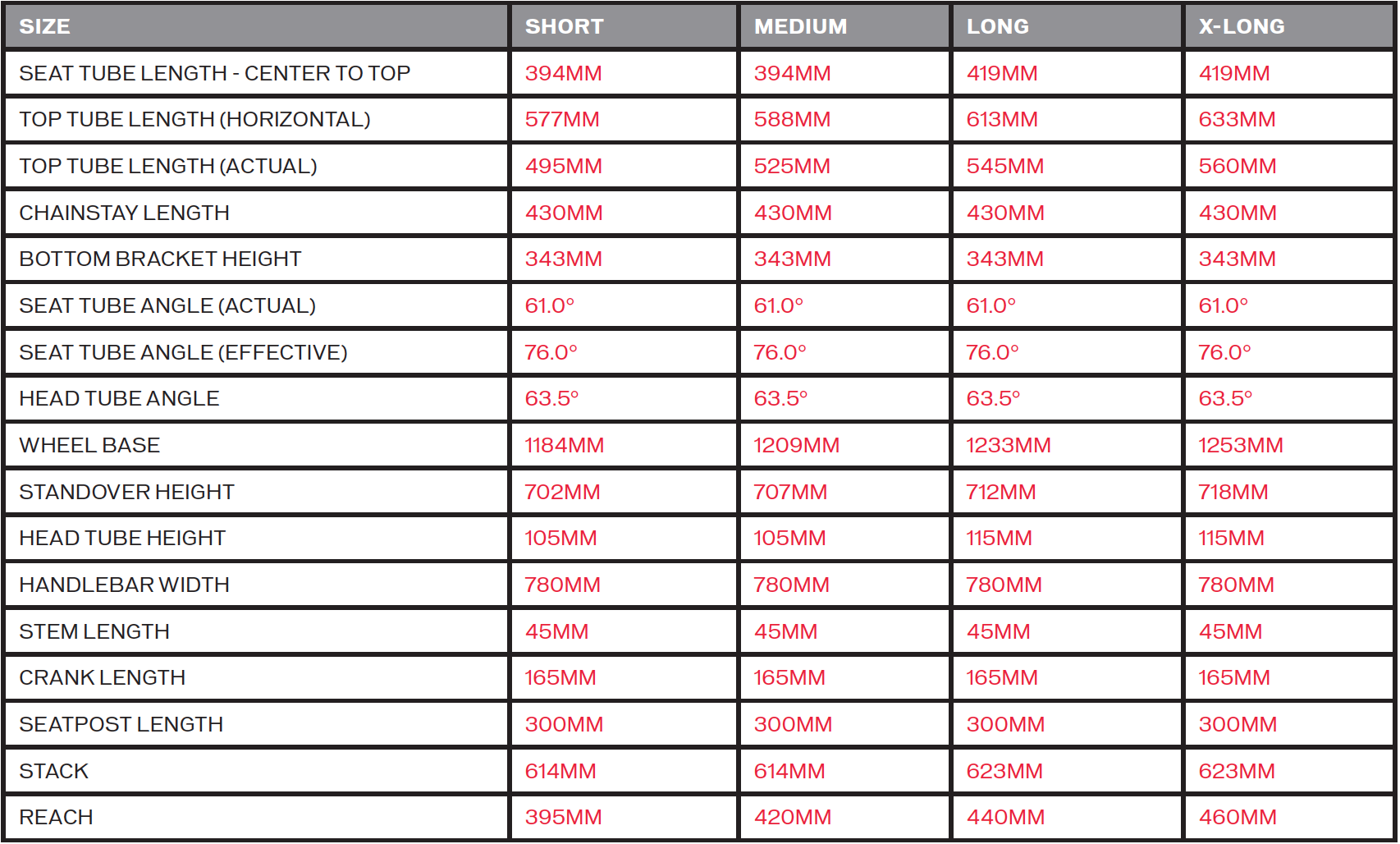 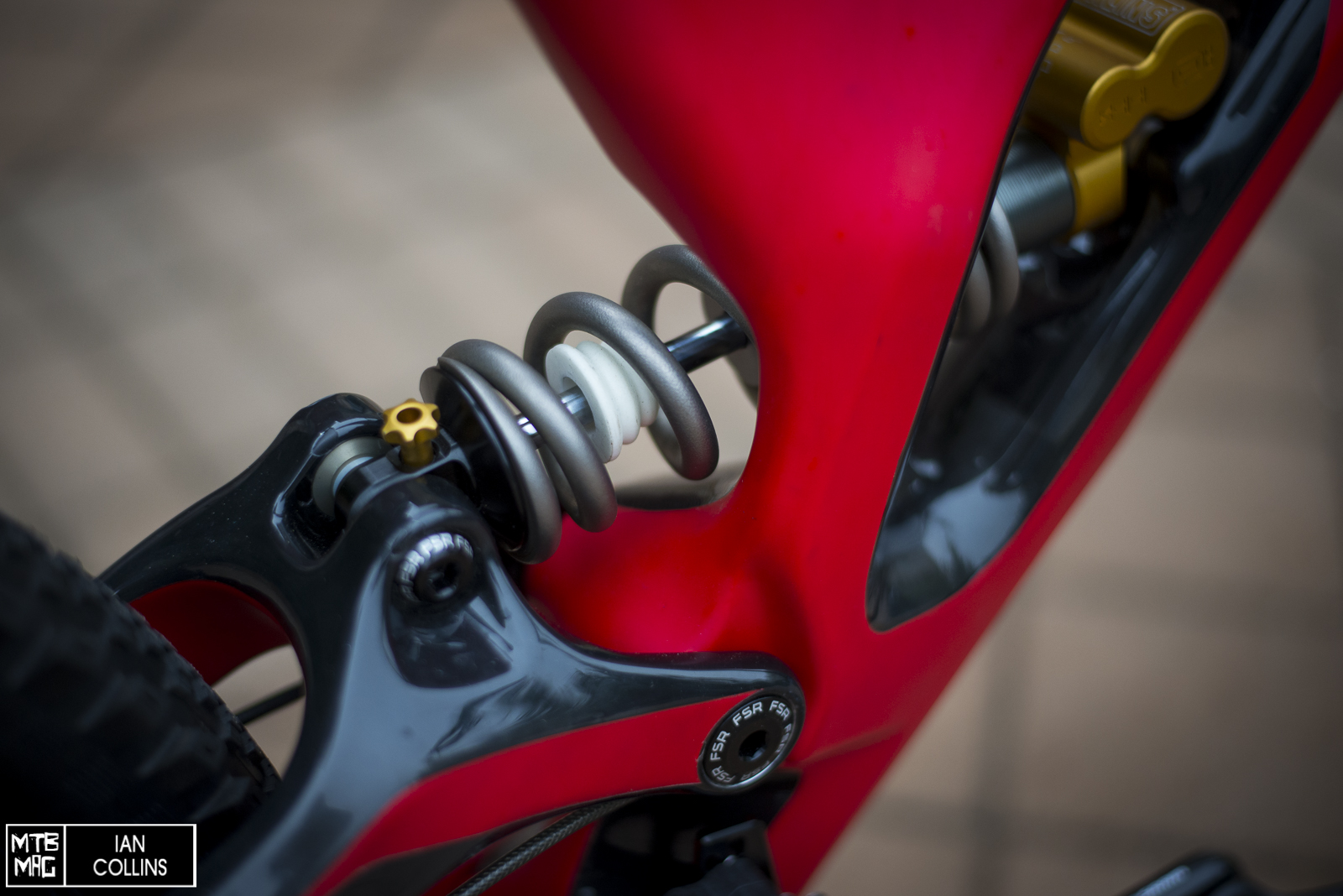 After a few bounces around, I realized the recommended spring was WAY too soft. I could easily bottom it in the parking lot. I went up a spring rate and bounced around again. Still too soft. The Ohlins TTX rear shocks come with spring rates in 24 pound increments, which to me is really cool. My current DH bike has me stuck between a 350 and 400 with no budget 375 lb spring. Unfortunately I had to splurge on a 375 lb ti spring. Anyhow, I digress. At that point I went back to the kind gentleman who was wrenching at Specialized and said : maybe just give me whatever spring rate Brad Benedict rides, as he seemed to be about my size. That spring still felt a bit soft, but I just decided to break out of my comfort zone a bit and try it.

As I zipped away on the bike and headed to the lift line, I became acutely aware of how long, low, and slack it was. Just how I like it. The bottom bracket seemed almost uncomfortably low, especially given how much sag I had. As I laid down some power on the pedals I realized it was quite neutral under pedaling. So far so good. 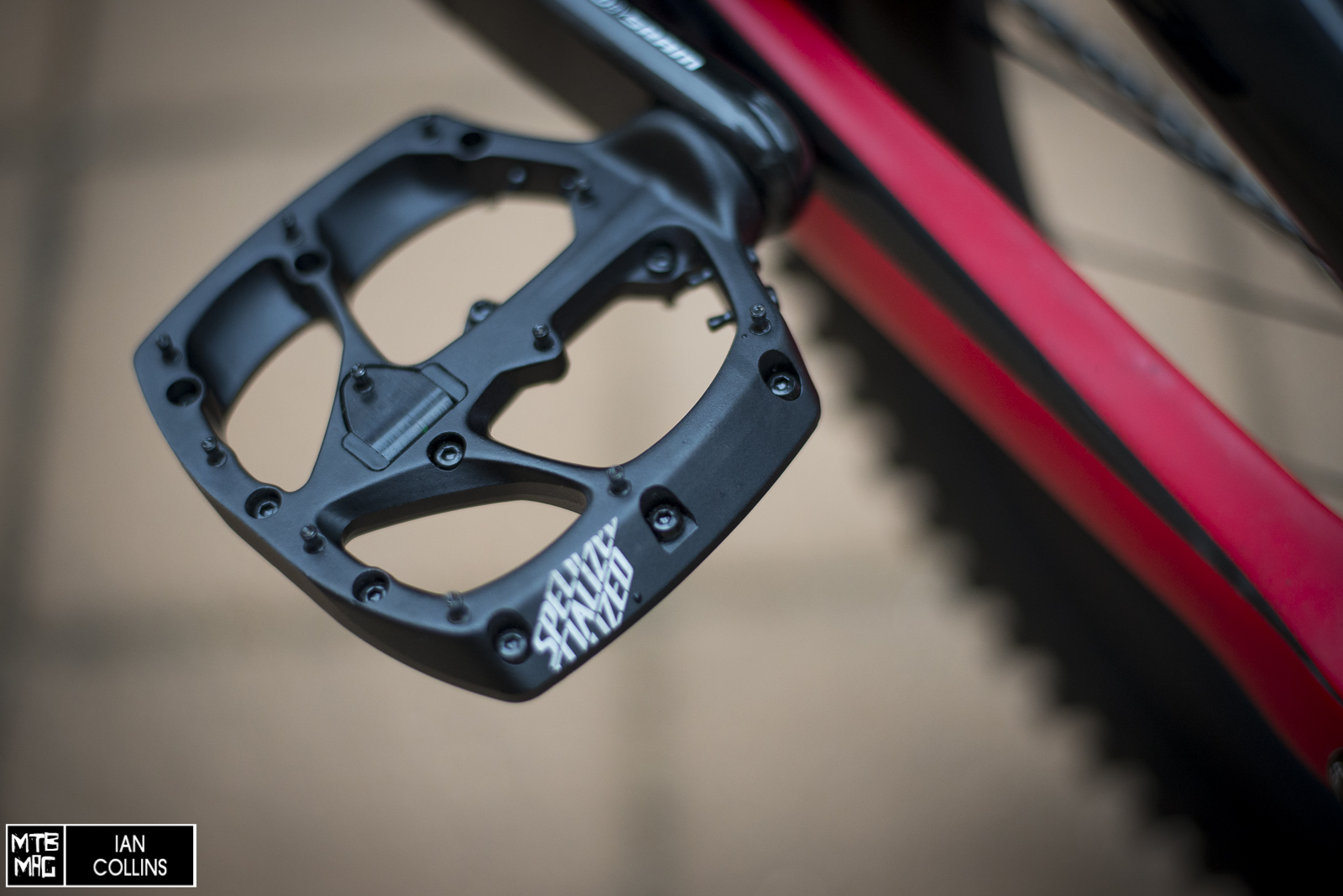 Once I got on the trails I must admit I was pretty blown away by this bike right out of the gate. It just absolutely BEGS to be ridden hard and fast. Hands down, it didn’t matter how much I pushed the bike – it handled incredibly and the traction was unreal in the corners. When you ride this bike you truly feel like you’re “in it”. It is hard to describe but you feel like you’re sitting deep down in the bike and nothing can phase or unsettle you. It’s so confidence inspiring that it can catch you by surprise. I had a bit of a moment when I overcooked a turn going into the woods.

The BB height was a bit disconcerting, but I also feel that I could have gone with a firmer spring – indicated by the fact that I was bottoming it quite frequently. The soft spring and fairly linear kinematics had me sitting a touch deeper into the travel than I would have liked, but as I said earlier : it is just a preliminary test with one day spent on the bike. Considering I felt undersprung and underdamped, the Ohlins handled everything impressively regardless. It really only threw me off a bit on the big jumps when I was diving through the travel going up the faces. Again, with a firmer spring and more time taken on setting up/testing, I’m sure that would’ve been alleviated. 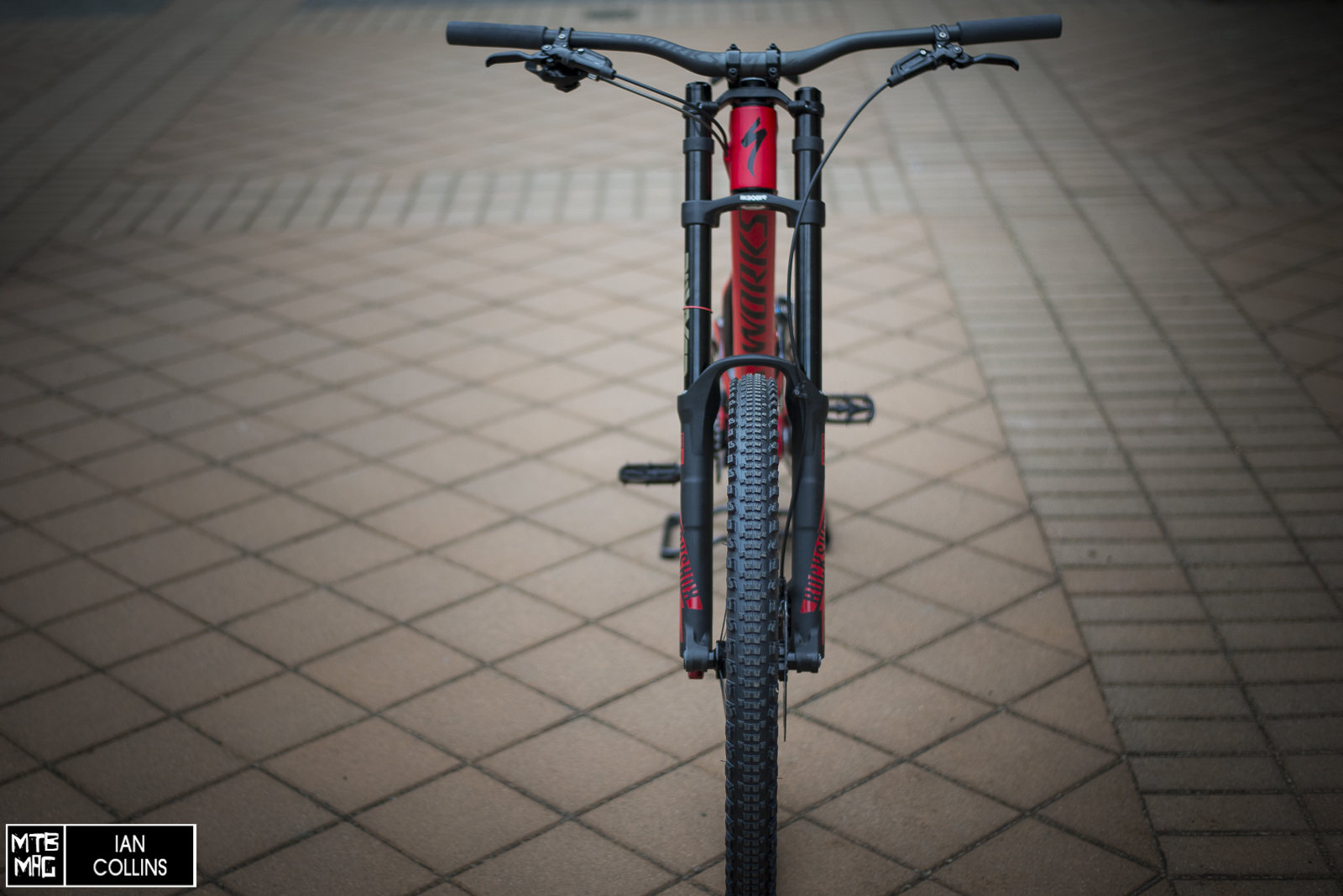 The chassis stiffness was second to none and you can really feel like lively responsiveness in the carbon. It is definitely “tuned” well in terms of layup. This definitely made a huge difference in the corners, especially those that were full of chatter and loose mid sized chunks. As I said prior, the pedaling efficiency was top notch as well. Geometry, which goes hand in hand with the steering, cornering, etc was DIALED. Once I set the brake levers, bar height and bar roll where I wanted, the Demo felt like home. Very cool considering I was coming off of 26” wheels. 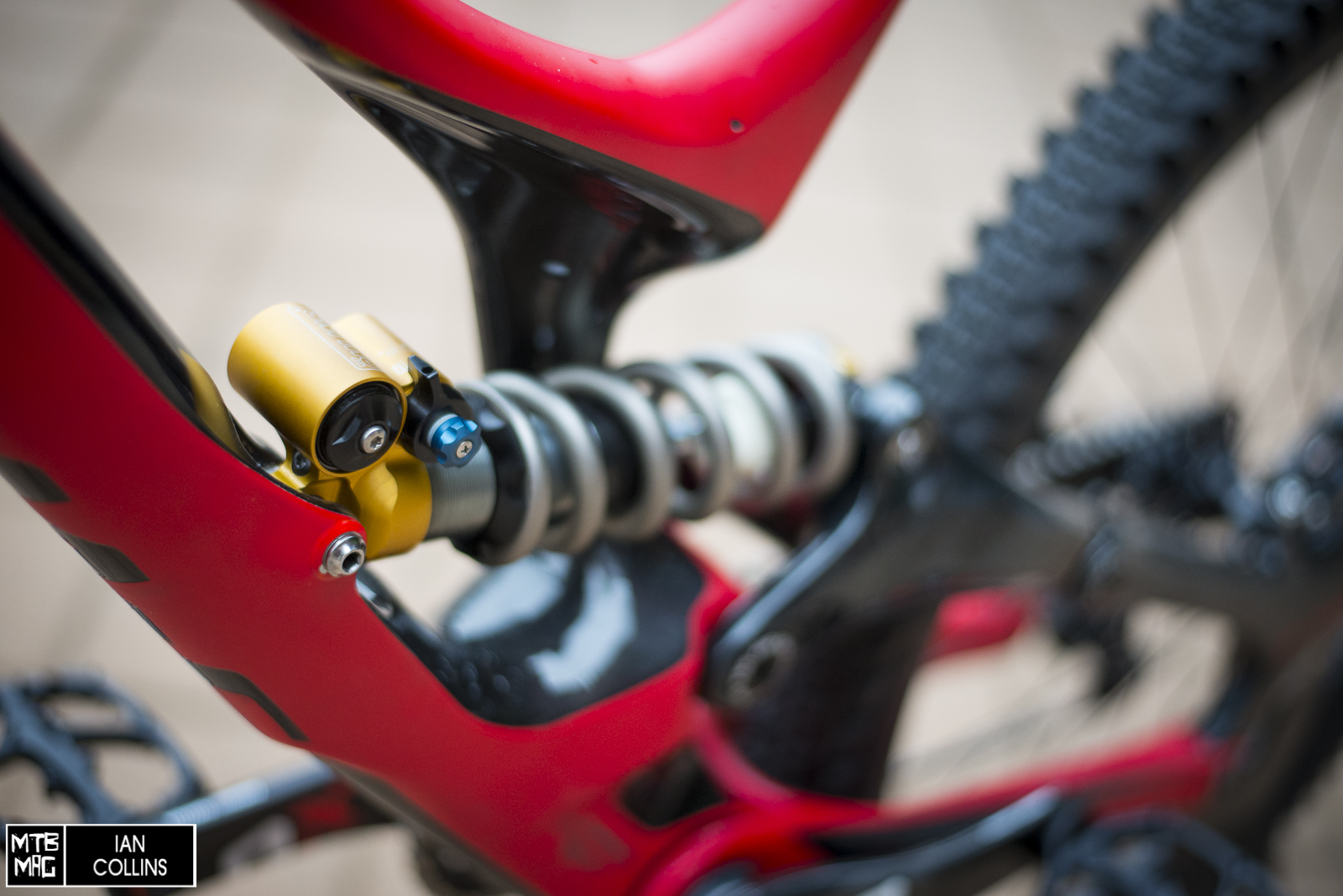 After a couple of runs I basically just came to the conclusion that this is a race bike through and through. It is designed to shave fractions of seconds in adverse terrain and allow it’s pilot to elevate his riding and push harder than ever before while limiting those consequential moments. If that was the goal that Specialized had when they built this bike, then hats off to them. A word of warning to those considering one : the geometry is aggressive and this bike isn’t meant to just putter around on mediocre trails. It’s shines when it is pushed super hard. The low bottom bracket(and lack of an adjustment for a higher setting) could cause problems for novice consumers just looking for a general purpose DH bike, but I’m quite confident that it’s price tag should let inquiring minds know that this bike was intended to be a no-holds-barred race weapon. Well done Specialized – this is one of the fastest DH bikes I’ve ridden to date.