It’s been some time since we’ve seen a major update from Bontrager in their tire sector, but the day as finally come. A few weeks ago I received the updated SE5 and the all new SE6 tire for testing. The SE5 is available in both wheel sizes and the SE6 is for 29″ wheels only. Both tires come in at a 2.5″ width and are aimed at the trail to enduro segment of the market. Although it’s premature to share any sort of long term review, I do have some initial thoughts on how they’ve been working out so far… 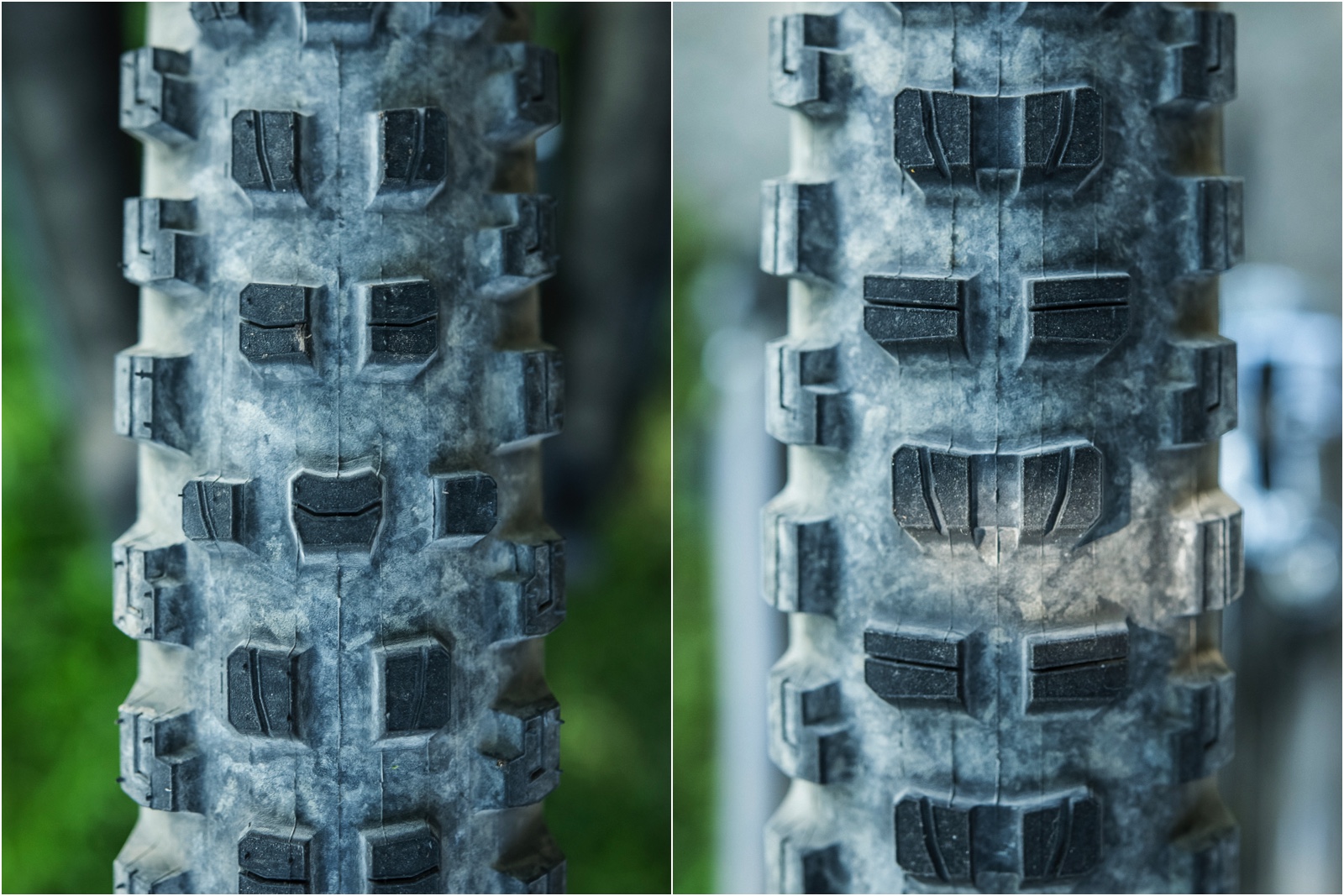 Upon first glance you might feel like these tires both look familiar, and for most riders it won’t take long to realize which tires they resemble. The SE6 – above left – bears some similarity to Maxxis’ new Assegai tire and the SE5 to its right looks very much like a Maxxis DHRii… 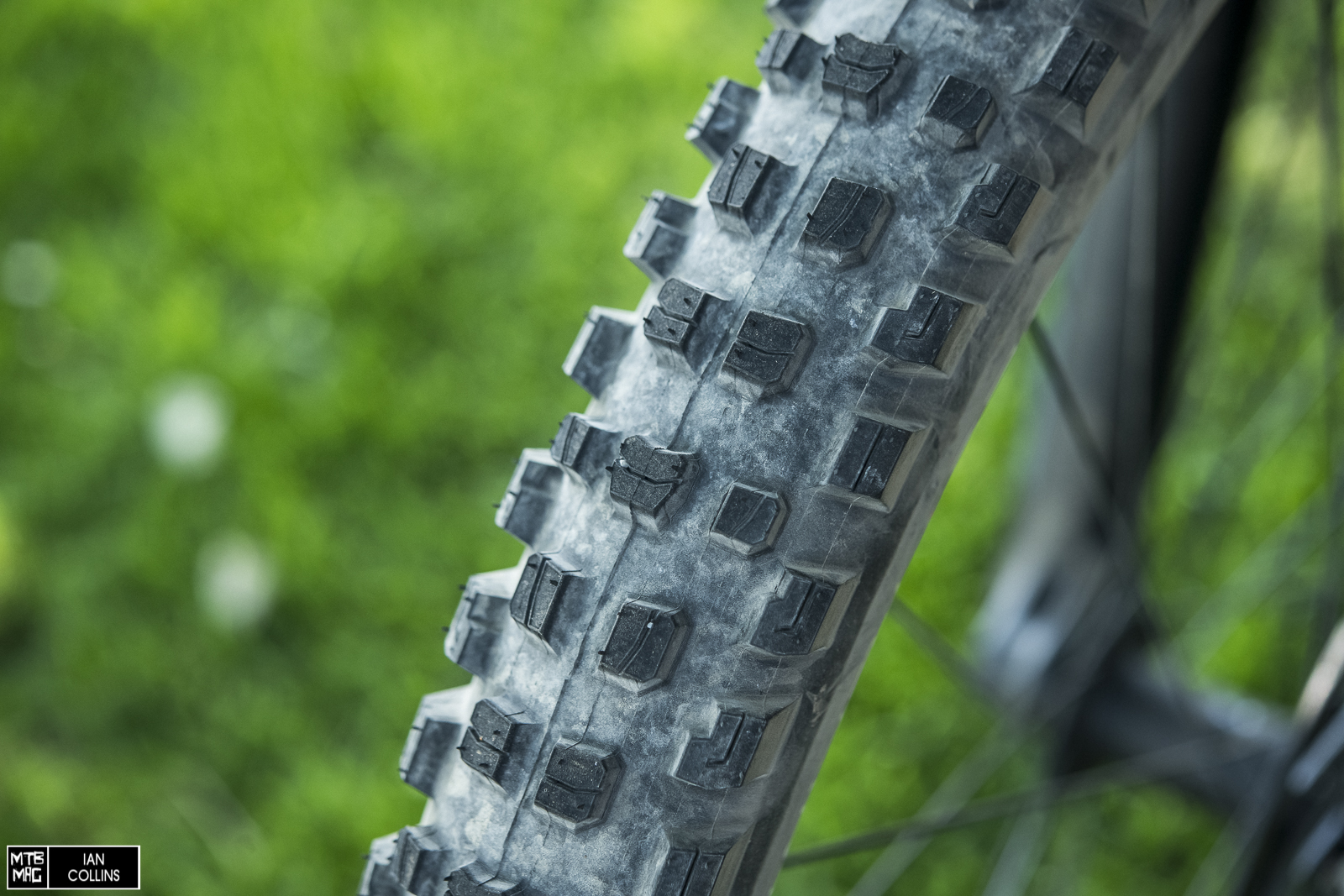 The SE6 uses a 2-3-2 pattern for its center knobs. From Schwalbe’s Magic Mary to Michelin’s DH22 to the aforementioned Maxxis Assegai, this is a very popular layout, and for good reason. You’ll notice from a close look at the side knobs that there are 3 distinct shapes, rather than a more alternating pattern. 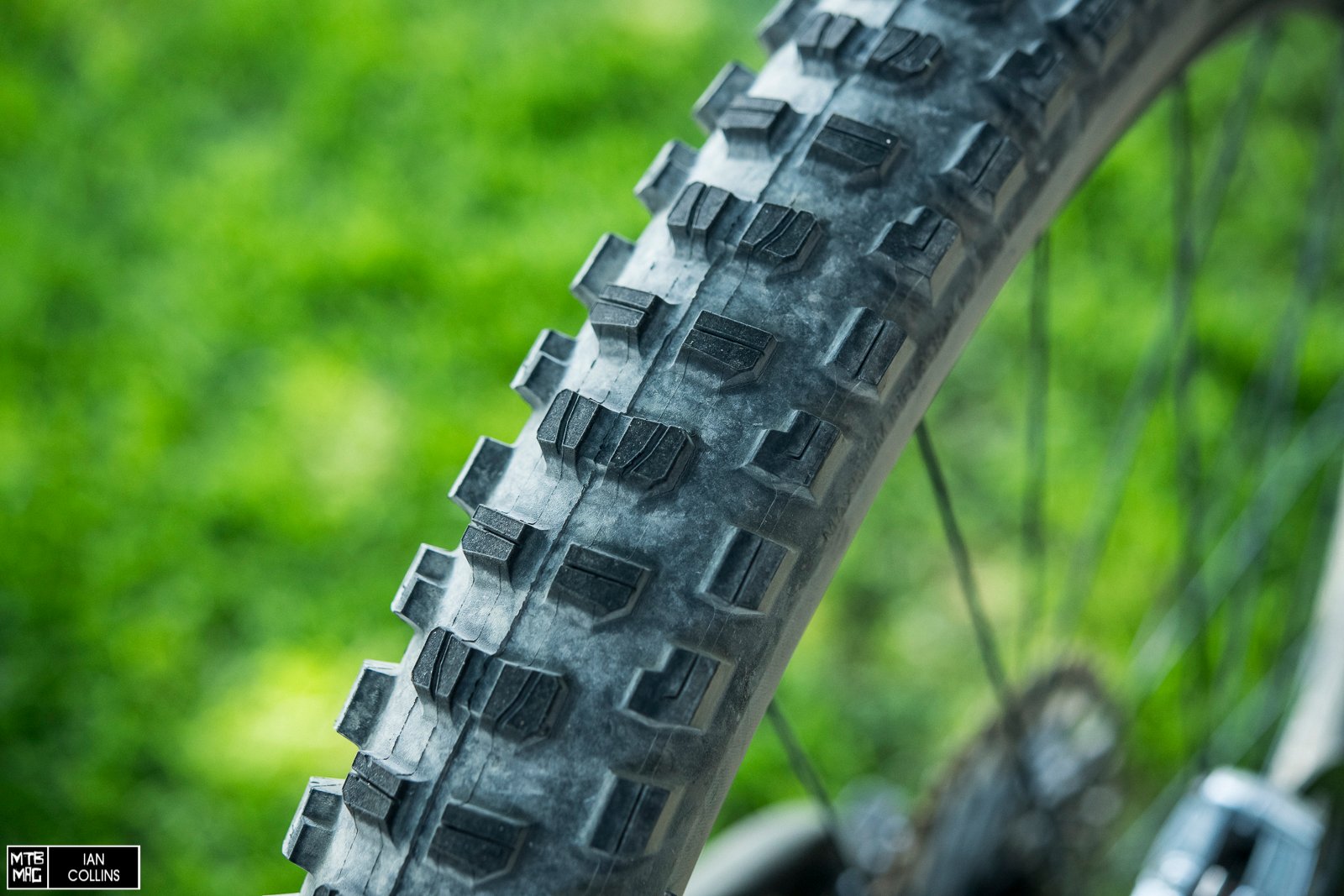 The updated SE5 features fairly similar corner knobs compared to its last iteration, but with a significant change in the middle that now see every other row’s knobs taking on a wider stance. 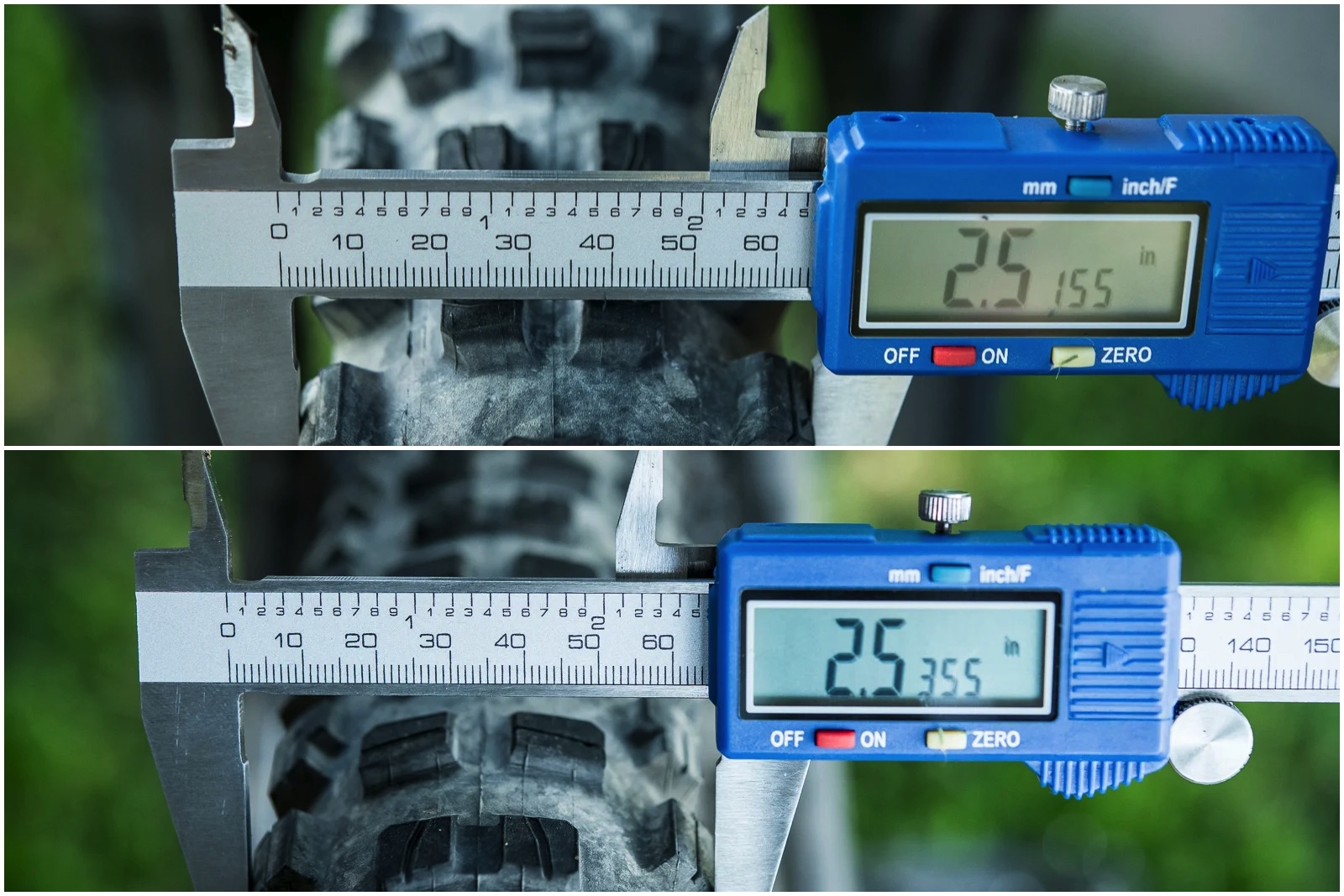 Both tires landed pretty darn close to a true 2.5″ mark. These measurements were taken at around 25 PSI on Bontrager’s new Line Comp 30 wheels with 29mm inner diameter rims. 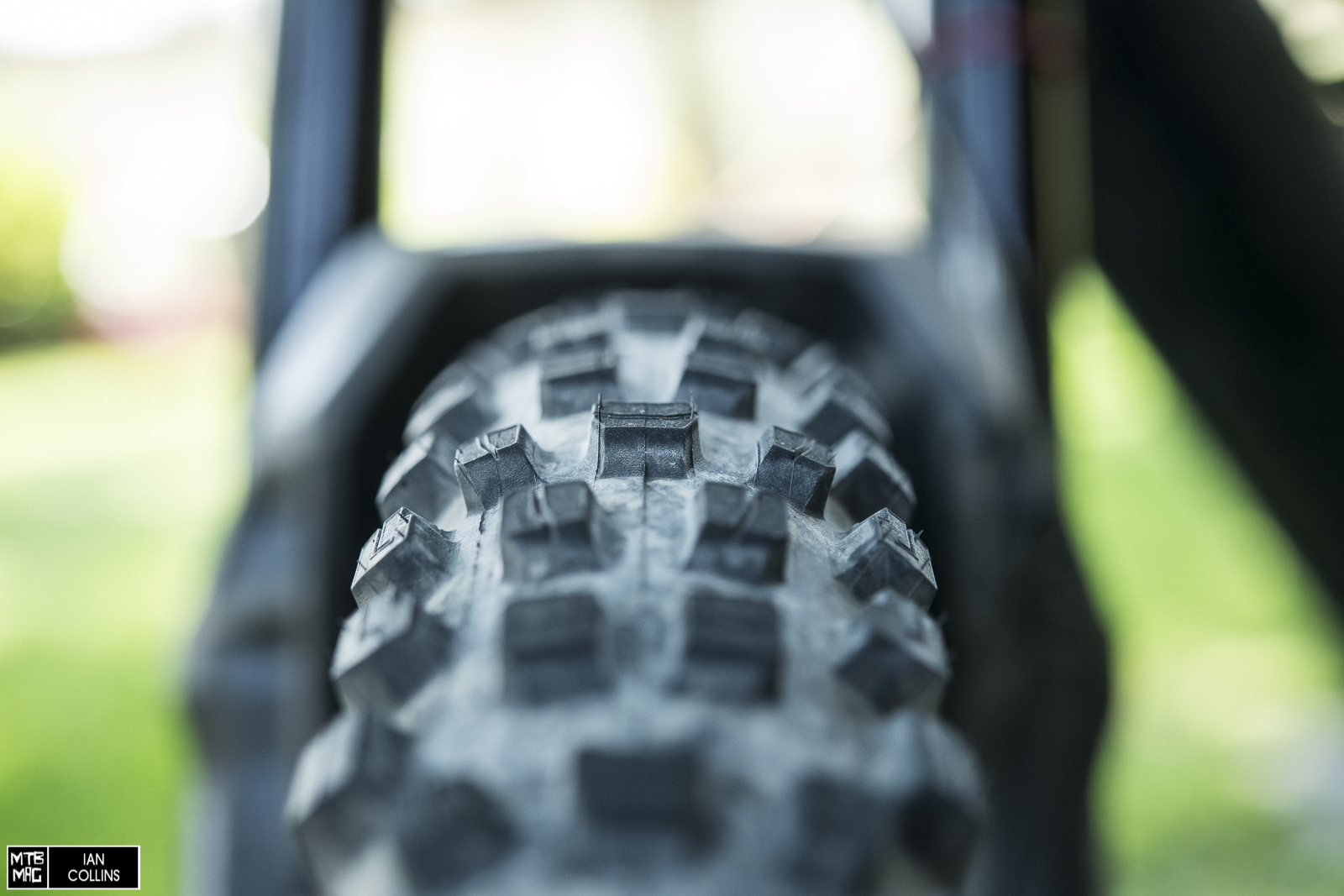 To me, the tires both strike the perfect balance between a more rounded and more squared profile. This is a nice change from the XR4 – often seen as OEM spec on a few Treks that I tested – and found to be a bit too round, making it feel a somewhat vague and disengaged in the corners. Both SE5 and SE6 are just now right in terms of profile. 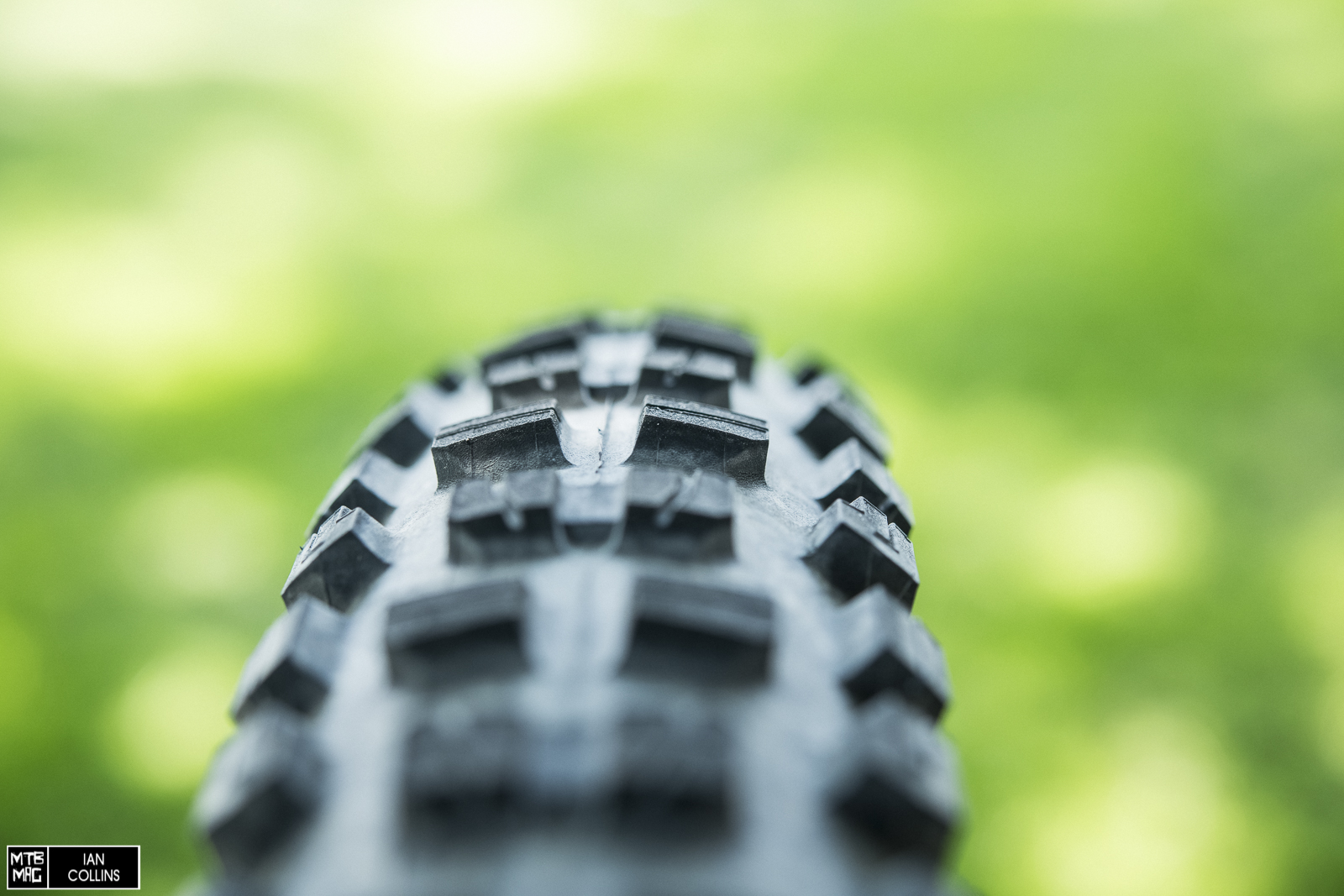 I haven’t taken exact depth measurements, but the knobs on the SE5 seem a hair lower in profile than the SE6. Note the fairly open section between the center rows and corner knobs due to the lack of the intermediate knobs compared to the SE6.

Starting out, it was an unsurprisingly easy install with a floor pump, given that I mounted the tires on Bontrager wheels. For the time being I’ve been running the SE6 up front paired to the SE5 out back as it seems like an ideal all around combo. It’s worth noting that you can run either tire in pairs as well.

Starting with the casings, which are essentially the same for both tires, they are very much “middle of the road”, duty wise. At slightly over the 1,000 gram mark, they might be a hair on the light duty side for riders who frequent terrain strewn with fixed jagged rocks. So far, I’ve been riding them on my e-bike on very rocky trails and haven’t flatted yet, but I do get nervous on two counts – due to the bike’s added weight and the ragged local trails here. The cornering support has been quite good, provided I don’t gamble too much with low pressures. I’ll be spending more time with these tires on a normal bike, but so far I think they strike a good balance of being sturdy enough without weighing you down too much. 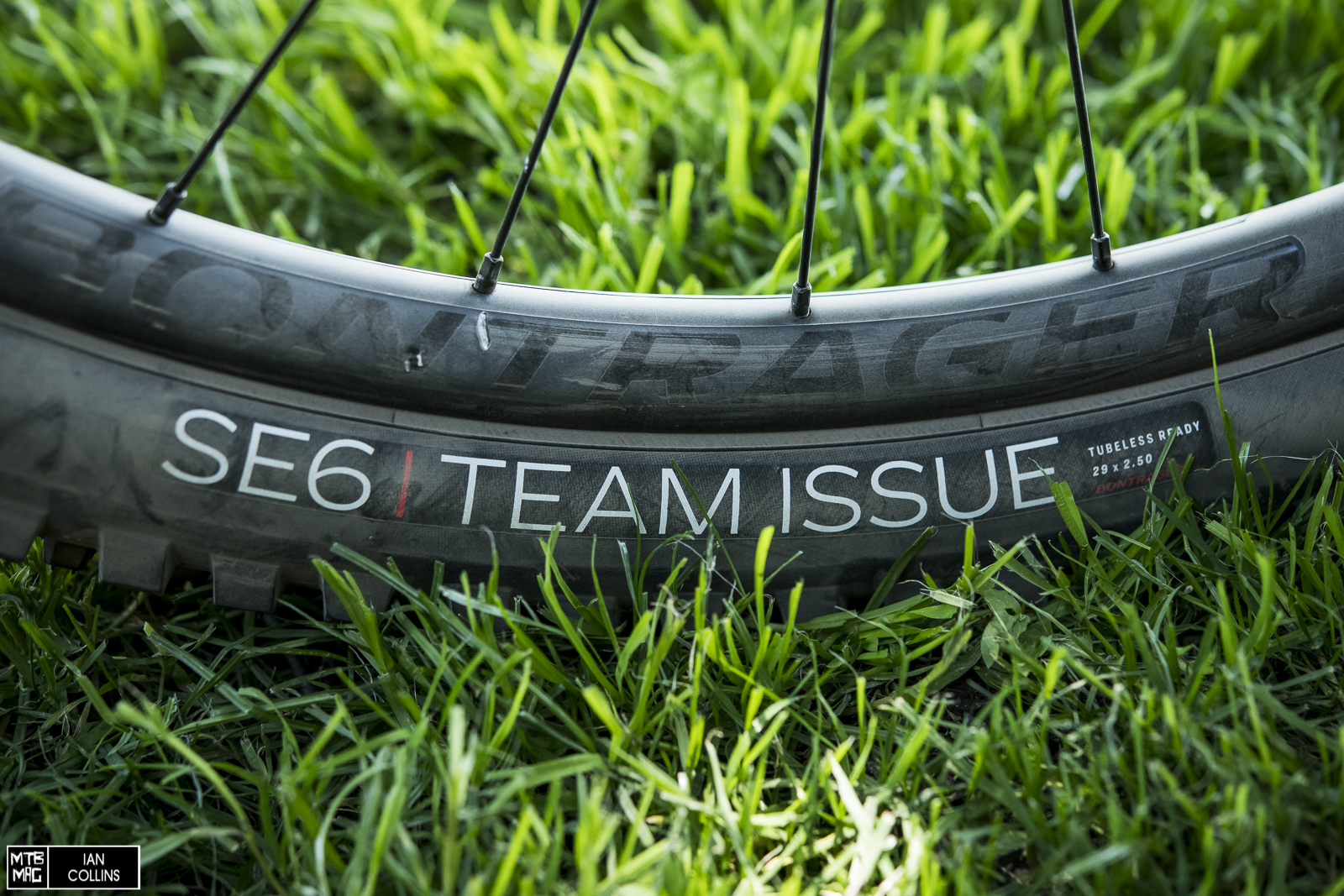 Starting with the SE6, I found its tread pattern very agreeable overall. It’s worth mentioning that I’ve yet to ride them in wet conditions as it’s quite hot (~100ºF) and dry in Northern Idaho at the time of writing this. They seem to balance the tasks of braking and cornering nicely in both loose dirt and hardpack very well, while rolling along fairly quickly. To no surprise, it reminded me of what I like about the Assegai and why I prefer it to the DHF – due to its improved performance in loose terrain. 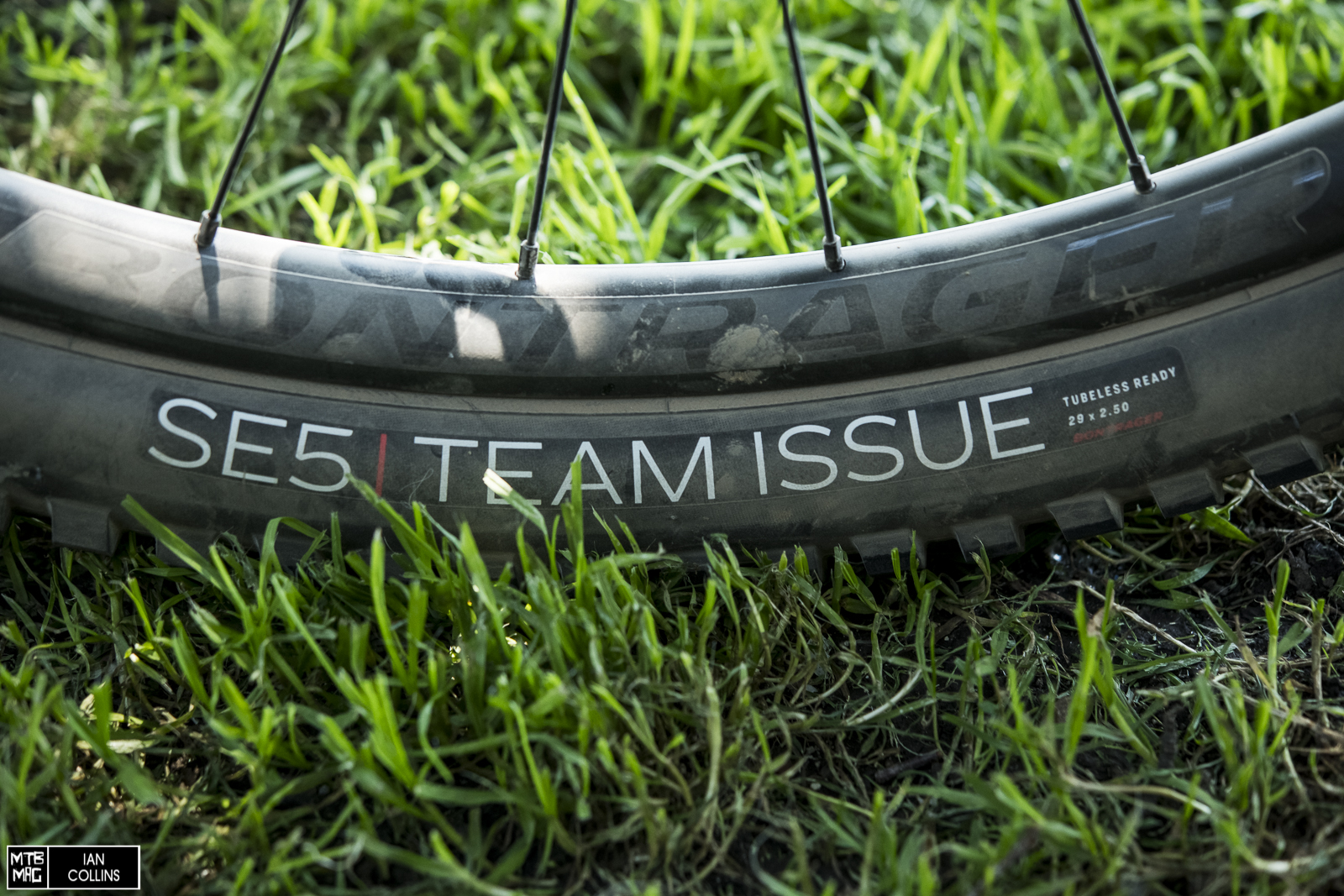 The new SE5 has a distinctly more aggressive feel to the tire it replaces. It brakes harder, corners more confidently and simply bites in more. But if my memory serves me correctly, it doesn’t have many downsides as I don’t feel that it rolls any slower, if at all. Overall I think the siping and new knob profiles give it a great corner feel, particularly on hardpack.

Both tires roll along fairly quickly and I think this is partially due to the fairly firm compound on the center knobs, but also can be credited to the fact that the knob height isn’t excessive. On the topic of compounds, Bontrager’s new TM-Grip formulation is dual compound, but I don’t feel a huge difference between the center and corner knobs – at least with the less than scientific thumb test…With that in mind, upon initially feeling that the compound was going to be quite firm, I did notice that the rubber has seemed to soften and break in after my first few rides. Now, if I was going to call out one downside, it’s that the rubber itself could stand to have more of a “slow” element to it. Soft-ish rubber is great, but a slow rebound element will calm the tires down at speed and instill confidence on roots and slick rocks. Like I said in the very beginning, I’ll need some more time to make a broader assessment. That time will come once we get some moisture around here, but my inclination is that these tires lean toward the faster rolling/more durable end of the spectrum and less toward the all out grip end of things.

When all is said and done, both of these tires are a substantial improvement over past offerings from Bontrager, so if you liked the old SE5, you’ll surely dig the new SE6 and the updated SE5. Running them as a combo seems to be a good choice if your daily rides encompass a broad range of terrain. Time will tell how they fare in the long run – we’ll keep you posted.