A couple of months ago we were in Sanremo for a preview of the Michelin Wild Enduro tire line, a new range of tires dedicated to Enduro which the French tire giant officially presents to the public today. There are 3 products: one dedicated for use at the rear and the other, in two different versions, is intended for use up front. We had two days full of riding, from dawn to dusk, to discover the performance capability of these tires on the extremely dry and dusty tracks of Diano Marina and Molini di Triora.

This whole project of a new range of dedicated Enduro tires was born at the end of 2015, starting with the development of a new carcass and new compounds specifically for these tires, the GUM-X3D and the MAGI-X². During 2016, the research expanded into tread design, starting with the production of prototypes that have been tested by Michelin athletes such as Adrien Dailly, Jérôme Clementz, Remy Absalon and many others. The test field of the Wild Enduro range was the Enduro World Series circuit, but the intended usage by Michelin is much wider than the Enduro race segment and ranges from Enduro amateurs pushing up towards more aggressive Freeriders.

With the Wild Enduro, Michelin wanted to create a simplified but complete range, with which a few quality products would be able to cover the widest range of possible conditions, adapting to 80% of the types of land that riders typically encounter, as stated by Michelin: from the damp soil in the forests to the dry, compact or sandy soil of the desert. The Wild Enduro range is currently available for 27.5 “wheels and will be marketed starting in March, while 29″ versions are on their way, but will arrive few months after their medium wheeled companions. All three tires in the range are 2.40” width.

The rear tire is called the Wild Enduro Rear and uses a particularly strong casing called Gravity Shield Technology, created specifically for this model…this makes it robust and suitable for heavy-duty uses typical of gravity disciplines. It consists of 3 layers of sturdy canvas, each at 33TPI which is fairly high-density. The bead is further strengthened by a layer of material that’s resistant to cuts and pinches.

It’s not only pinch flat resistance, but also the rigidity of its structure which allows the Wild Enduro Rear to endure the harsh punishment of highly aggressive driving. The penalty for the tough casing is measured in terms of weight as the tire tips the scales at an average of 1,070 grams. The compound used for the Wild Enduro Rear is the GUM-X3D, an evolution of the previous GUM-X, made specifically for this new range of tires using 8 different types of rubber. The GUM-X3D is able to provide additional grip and traction compared to the previous version, thanks to increased flexibility of the knobs, while ensuring the same level of efficiency in terms of rolling resistance. In this respect, the tread pattern, which is rather aggressive manages to strike a balance between offerings gobs of traction and still getting you up and down the hill without too much difficulty. 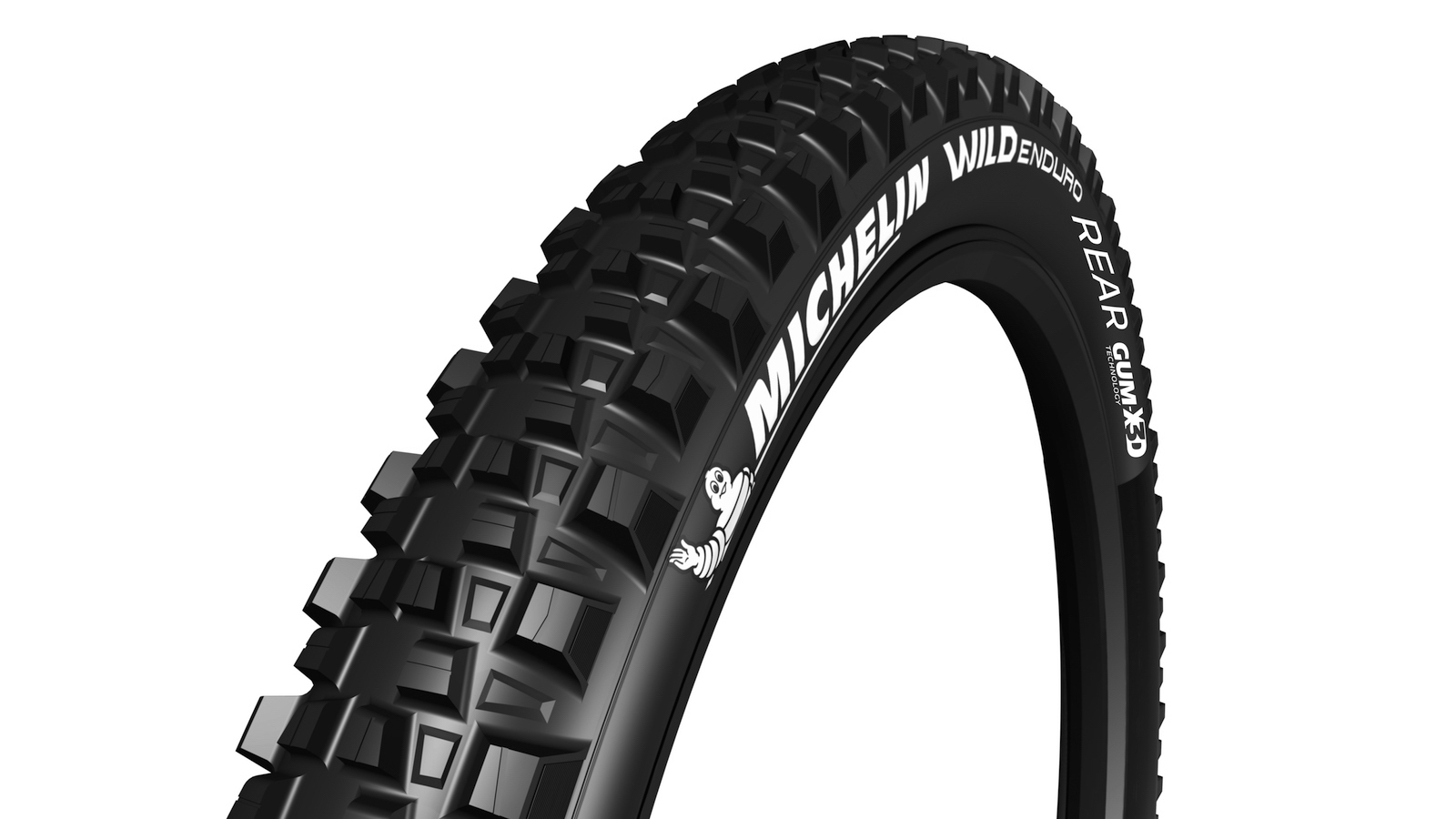 The Wild Enduro Front is clearly intended for the front wheel and shares the new GUM-X3D compound with the Wild Enduro Rear. Grip and flexibility in the knobs allow the tread to adapt to the ground while maintaining the right contact, for a safe and comfortable ride. The tire is designed to be most ideal when paired with rims using an internal width of around 30mm, providing a nicely rounded profile. The side knobs are well pronounced and broadly spaced, with an abundant ramp to support the shoulder, thus providing loads of cornering support under aggressive riders. The center knobs, arranged on two alternating rows, have two ramps that optimize rolling resistance but still stay firm under braking. Vincent Ledieu, who created the Wild Enduro range, definitely paid attention during braking tests, so that the tire could brake as late as possible while still being in full control. 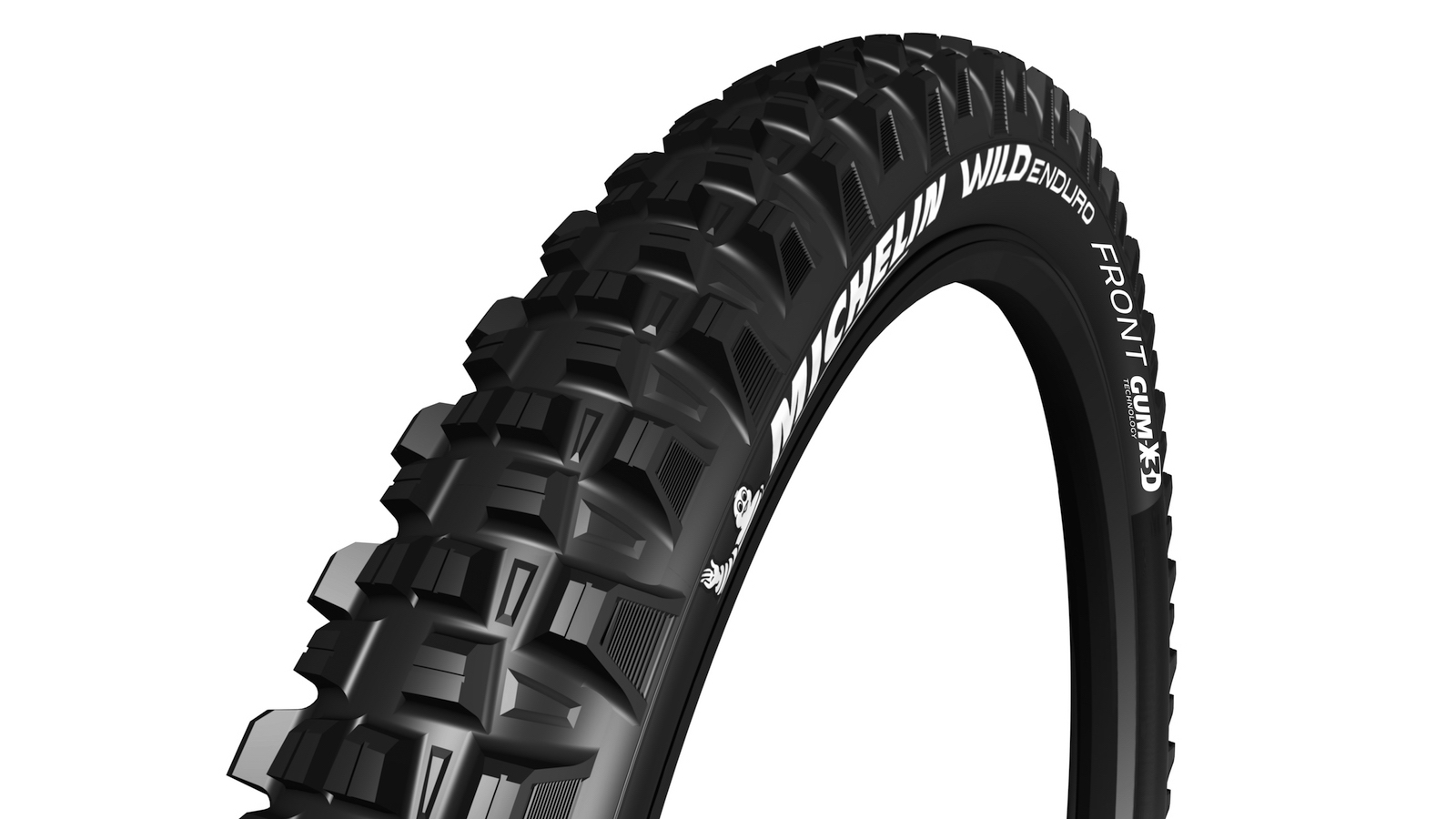 The front model casing also uses Gravity Shield Technology but its composition is different from that of the Rear model. There are still 3 layers of canvas, maintaining its intended usage toward heavy riding, but each layer is formed by a lighter 60TPI weave, with the intermediate layer being a higher density. In the Front model there is no pinch flat protection at the bead. The version of Gravity Shield Technology used on the Wild Enduro Front helps the tire to contain the weight and come in just below 1 kg, with a claimed average weight of 980 grams.

The Wild Enduro Front is also available in a new compound, the MAGI-X², an evolution of the MAGI-X, which has been developed to offer further performance, especially in the racing field, and is aimed at the most experienced and demanding riders. The Gravity Shield Technology casing has the same composition as that of the Wild Enduro GUM-X3D and the tread pattern is identical, but changes are in the composition of the tire compound. The MAGI-X² offers additional grip compared to the GUM-X3D but above all it has more rigid blocks that provide greater precision at higher speeds, with a more immediate and reliable response when the terrain is more demanding. 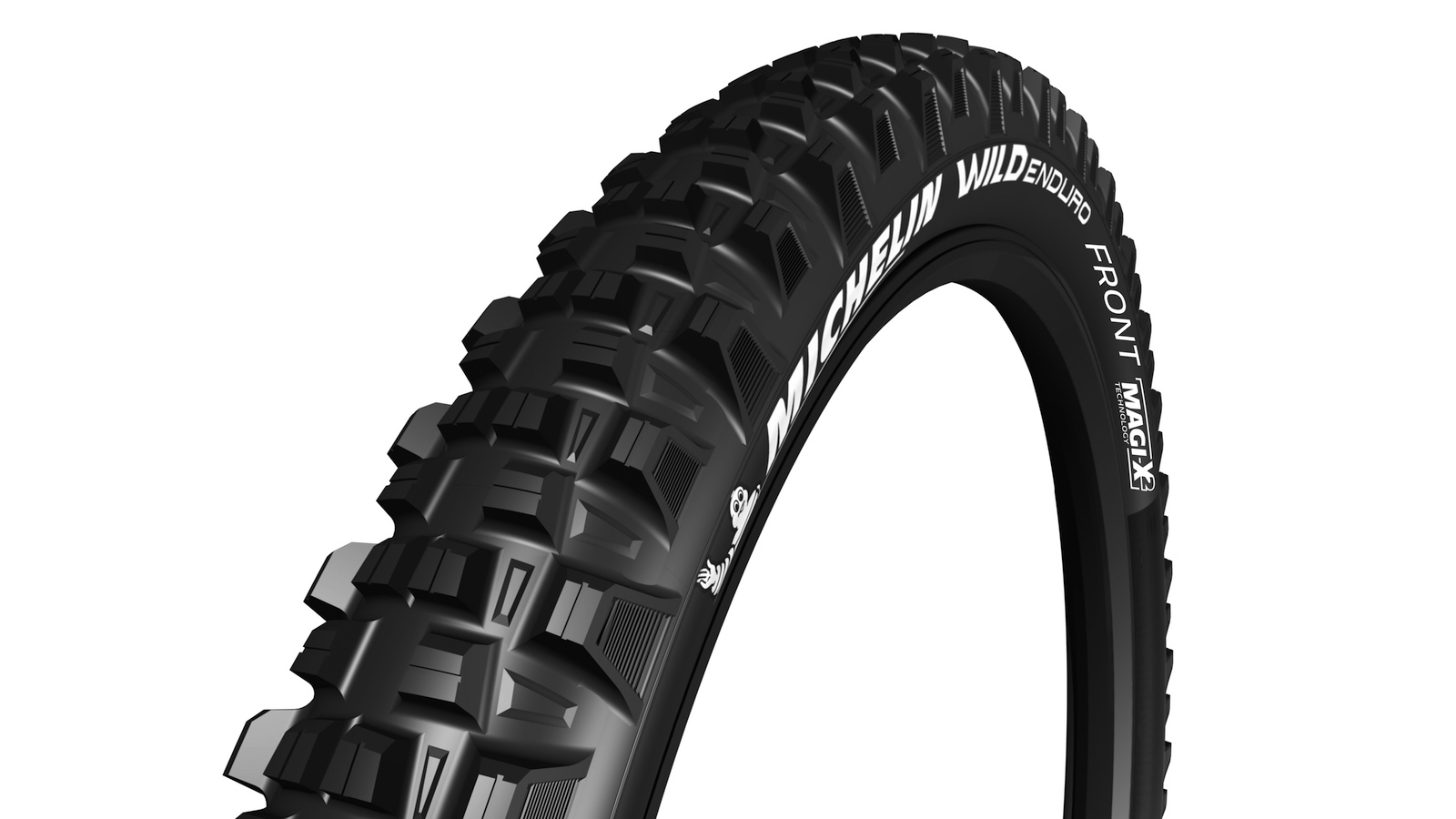 As we hinted in the beginning of the article, our first ride aboard the Wild Enduro range took place on absolutely dry and dusty and therefore very challenging trails. We started uphill, on a dirt road, so we could concentrate on the rolling behavior of the rear tire. On the first steep climbs, I immediately appreciated the traction and the incredible grip that the central knobs were able to provide, even on dry, dusty rocks – rather difficult terrain. In the flat sections we could appreciate the excellent rolling resistance in relation to the rather aggressive tread pattern and the soft compound. Downhill sections proved that these tires offered an intuitive and easy to interpret behavior, with extremely worthy side grip in both the turns and under above average braking. The shoulder knobs support you very well and in general the behavior was solid yet comfortable. It should be noted that during the two days of riding there were zero punctures / pinches in the whole group, between journalists and staff, despite the rock strewn trails – this is extremely uncommon in press camps.

On the first day, we paired the front GUM-X3D compound tire to the standard rear tire which shares the same compound – the grip is excellent and the knobs are able to flex just enough to provide a compromise between precision and comfort. The design of the side blocks, well spaced and with a wide supportive knob ensures that their flex is progressive. This encourages intuitive behavior that instills confidence and security. The center rows bite into the terrain nicely during braking and allows powerful late braking, while maintaining good contact with the ground. Changes in direction were simple and predictable. The side knobs provided great support without flexing or twisting.

During the second day of riding we used the front Enduro Front in MAGI-X² compound – the same tire as used the previous day, but with a different compound. The rubber is in fact the only detail that diversifies the two models, but the difference is really noticeable. The MAGI-X² compound is actually softer and offers more grip, but the remarkable thing is that the designers at Michelin have managed to formulate the compound to offer loads of traction with greater elasticity and reactivity in the material making it even more aggressive and race oriented. Better traction all around and a fast rolling resistance…somehow.

With the new Wild Enduro line, Michelin has hit their target range of products suitable for everyone but with clear and evident race oriented performance. The rear, apart from the weight (which certainly does not go unnoticed) is an excellent tire in all respects, while the front in addition to amazing all around performance also offers the possibility, depending on your riding style/terrain, to choose the appropriate compound, which greatly differentiates its behavior. The Wild Enduro line is well positioned, up there with best products currently on the market.