The RockShox BoXXer is the fork that has the longest life in the history, with 20 years of success in its career, gaining several podiums and rainbow stripes. 20 years of prototypes, production models and special editions, as we can see in this visual timeline. 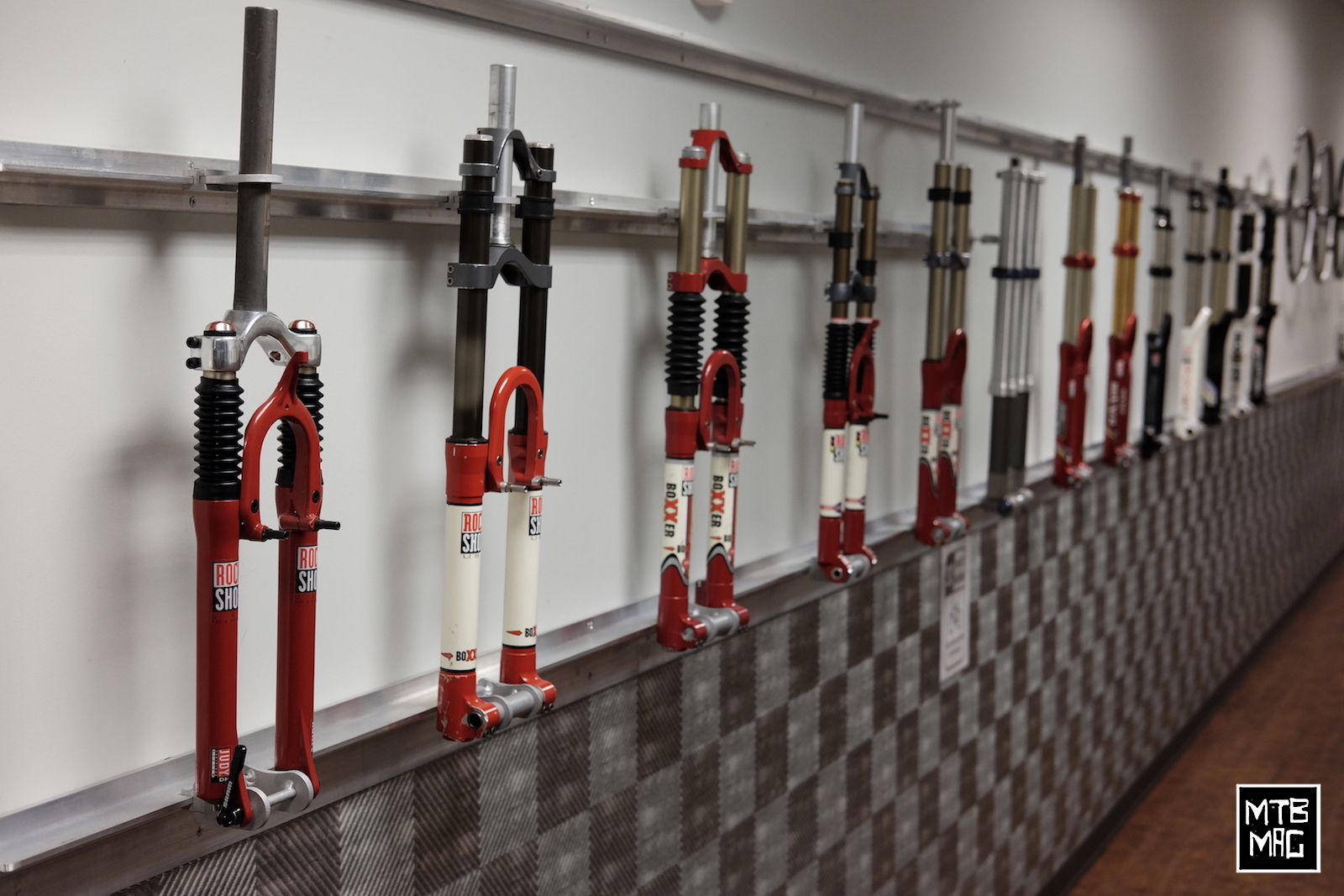 7 years after entering the world of MTB suspension with the RS-1, in 1995 RockShox presented the Judy model with elastomer springs and larger 28mm stanchions, instead of the previous 1 inch size. The Judy of 1996 was offered in 4 different versions: the XC (50mm of travel), the SL (60mm of travel), the FSX (75mm) and a version with 80mm of travel, equipped with a specific rebound knob, that has marked the beginning of a production of specific series downhill fork: The Judy DH. 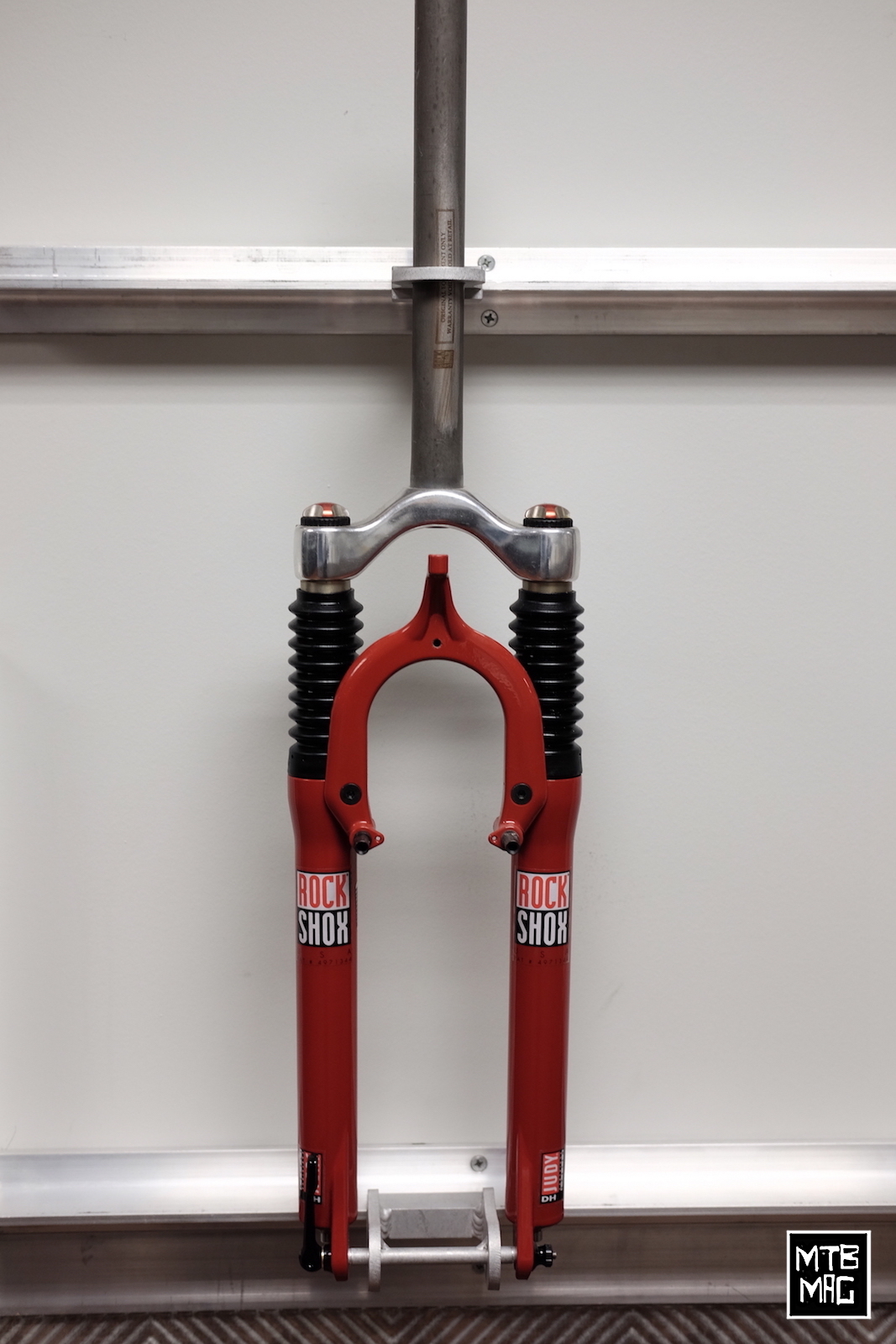 On Judy DH, RockShox provided one cartridge for the management of the compression damping and a separate cartridge for the rebound damping. With this fork, Leigh Donovan won the DH World Championships in Kirchzarten (Germany) in 1995. While the first Judy DH forks were being sold in stores, RockShox engineers built this prototype dual crown fork, with coil springs, 32mm stanchions and 150mm of travel. This was the first BoXXer in history. 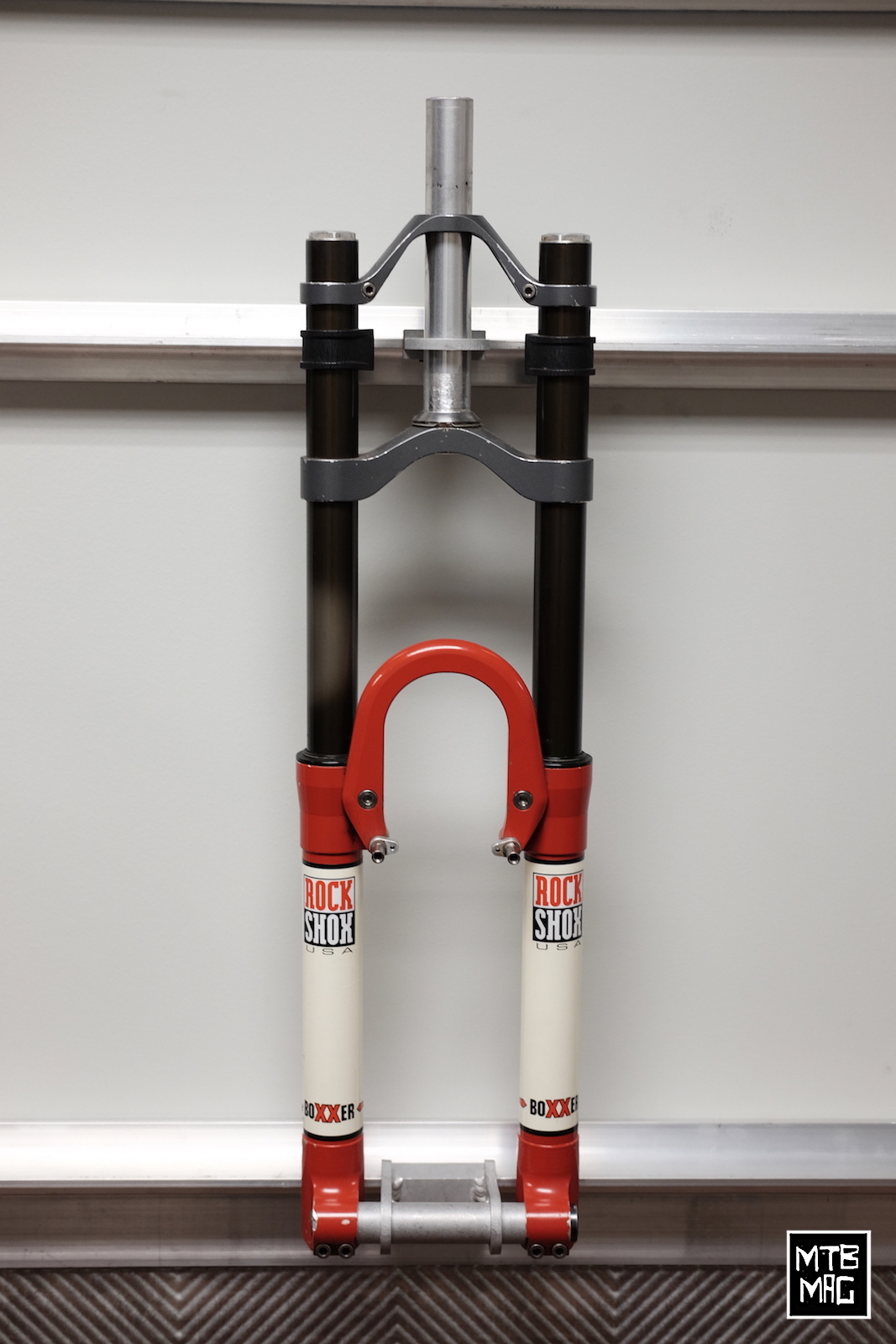 Only 20 prototypes left the RockShox factory. One of them went into the hands of a young Steve Peat just after he had finished in second place at the 1996 UCI World Cup DH #1 in Panticosa (Spain) on a Judy DH. Peaty goes down as the only top rider sponsored by RockShox to have used all BoXXer models produced so far at the highest level. 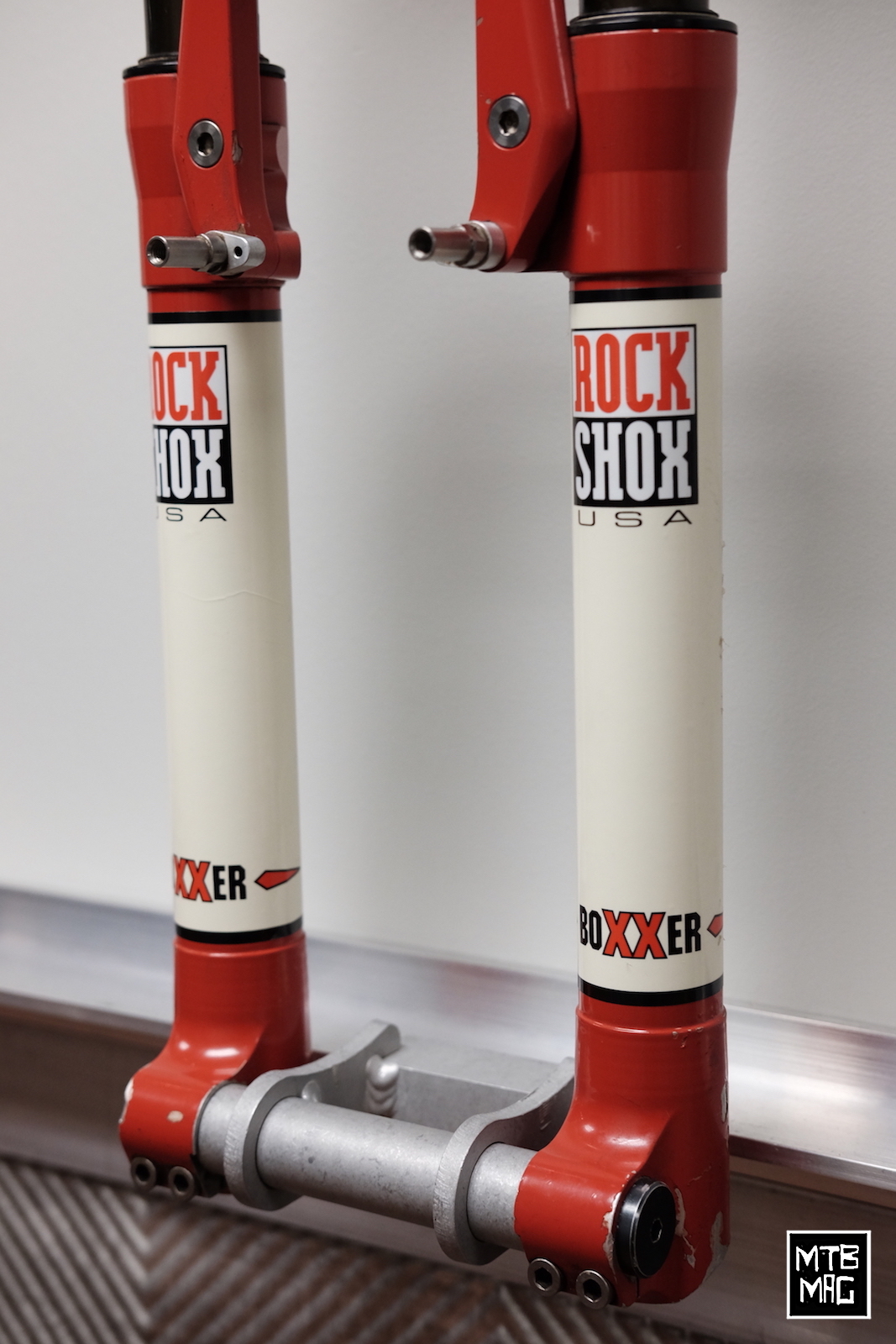 The BoXXer project had proven successful thanks to its stiffness from and long travel, so the prototype was then refined for the 1997 season with new features. 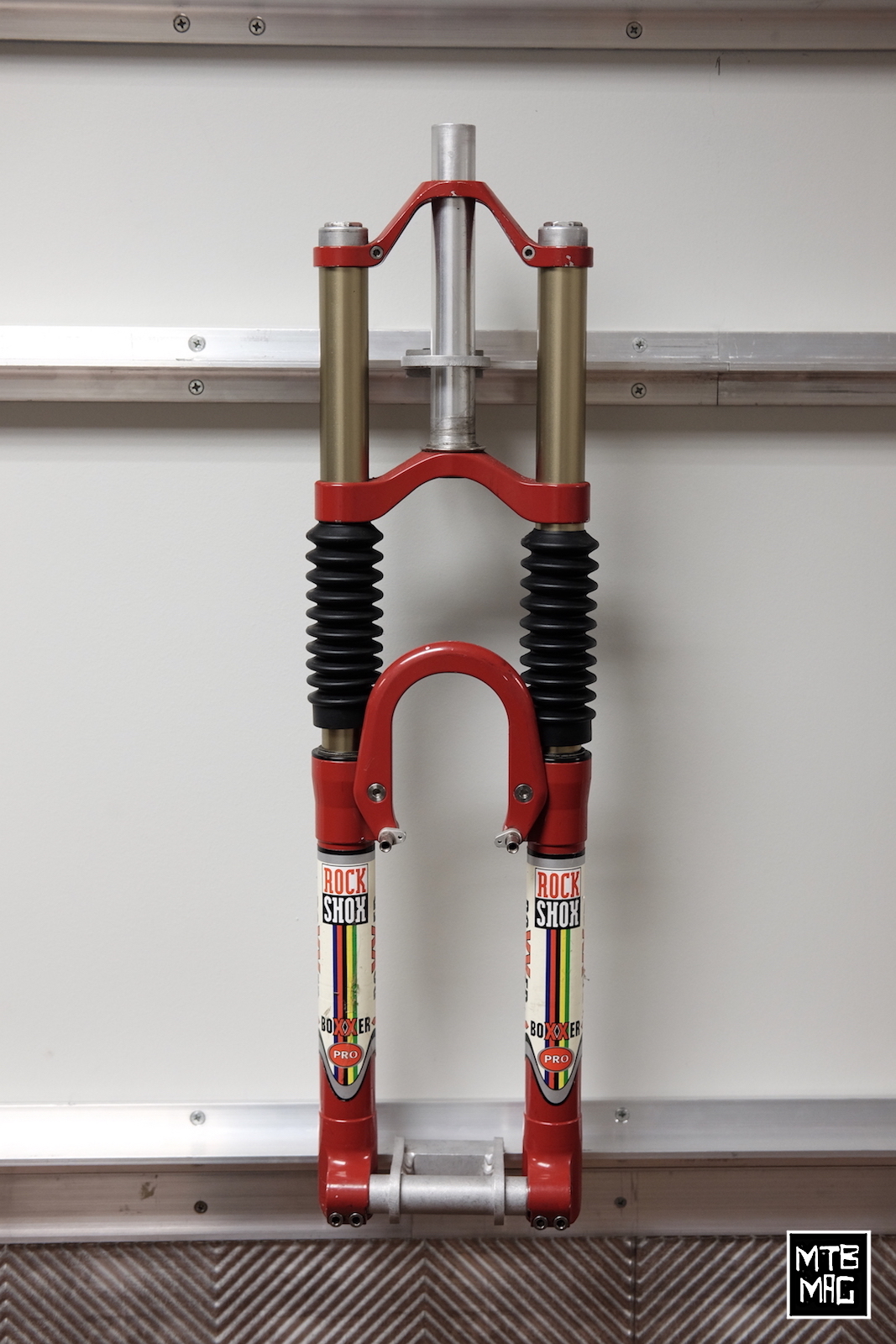 The lowers on the 1997 BoXXer received added support for disk brake calipers, in addition to the arch that supported V-brakes. For the first time the HydraCoil hydraulic cartridge was added in to make the fork more sensitive to small bumps. In 1999 it was applied to the rest of the RockShox range in production. Only 30 of these prototypes were produced. In 1997, during the production of the prototype BoXXer PRO, set aside for pro riders and therefore not accessible to ordinary customers, RockShox continued to produce the Judy, updating it to a double crown version called the Judy DHO. 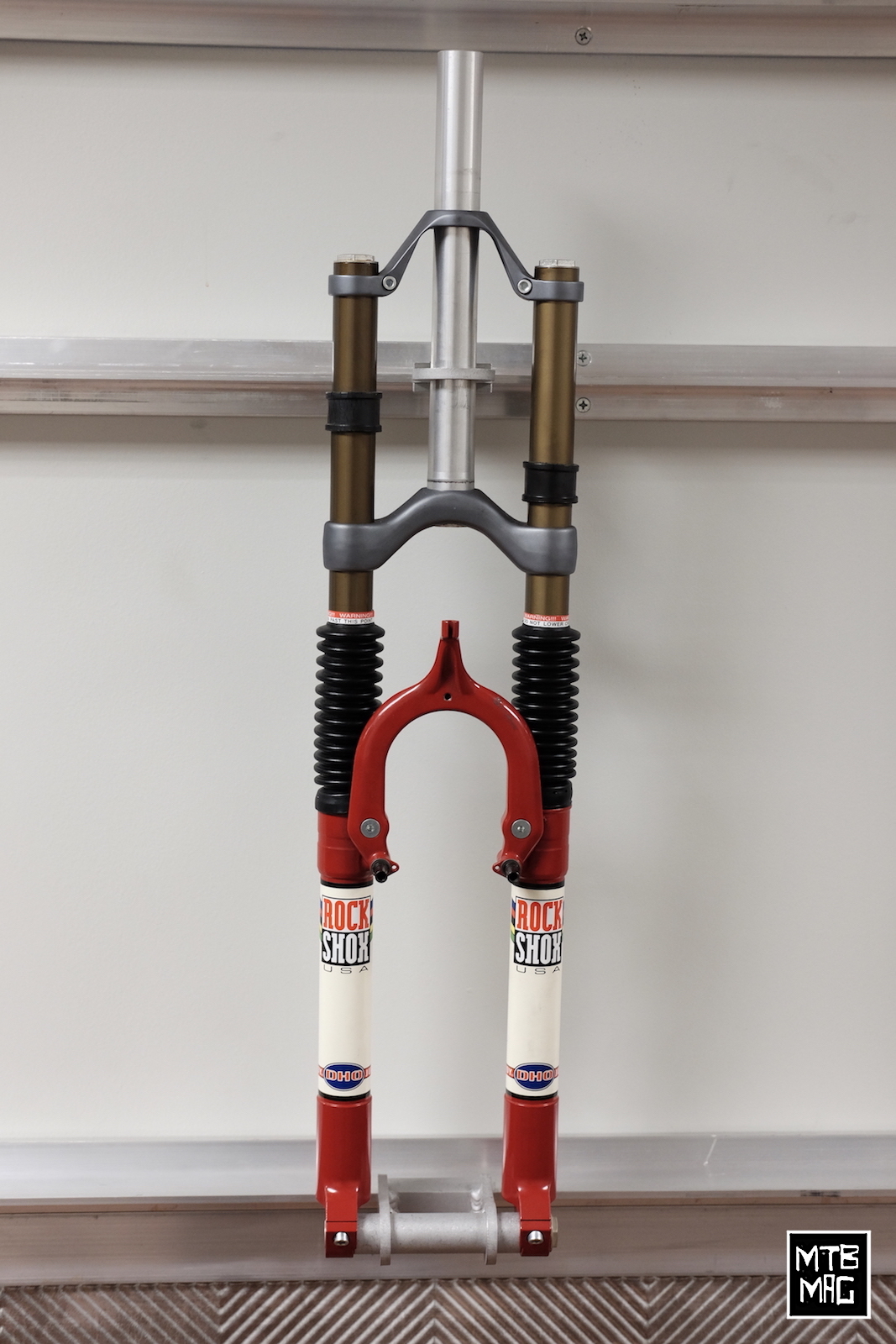 While it supported Cantilever or V-Brakes, the Judy DHO was also equipped with the support of disc brakes as they became more and more popular amongst consumers. 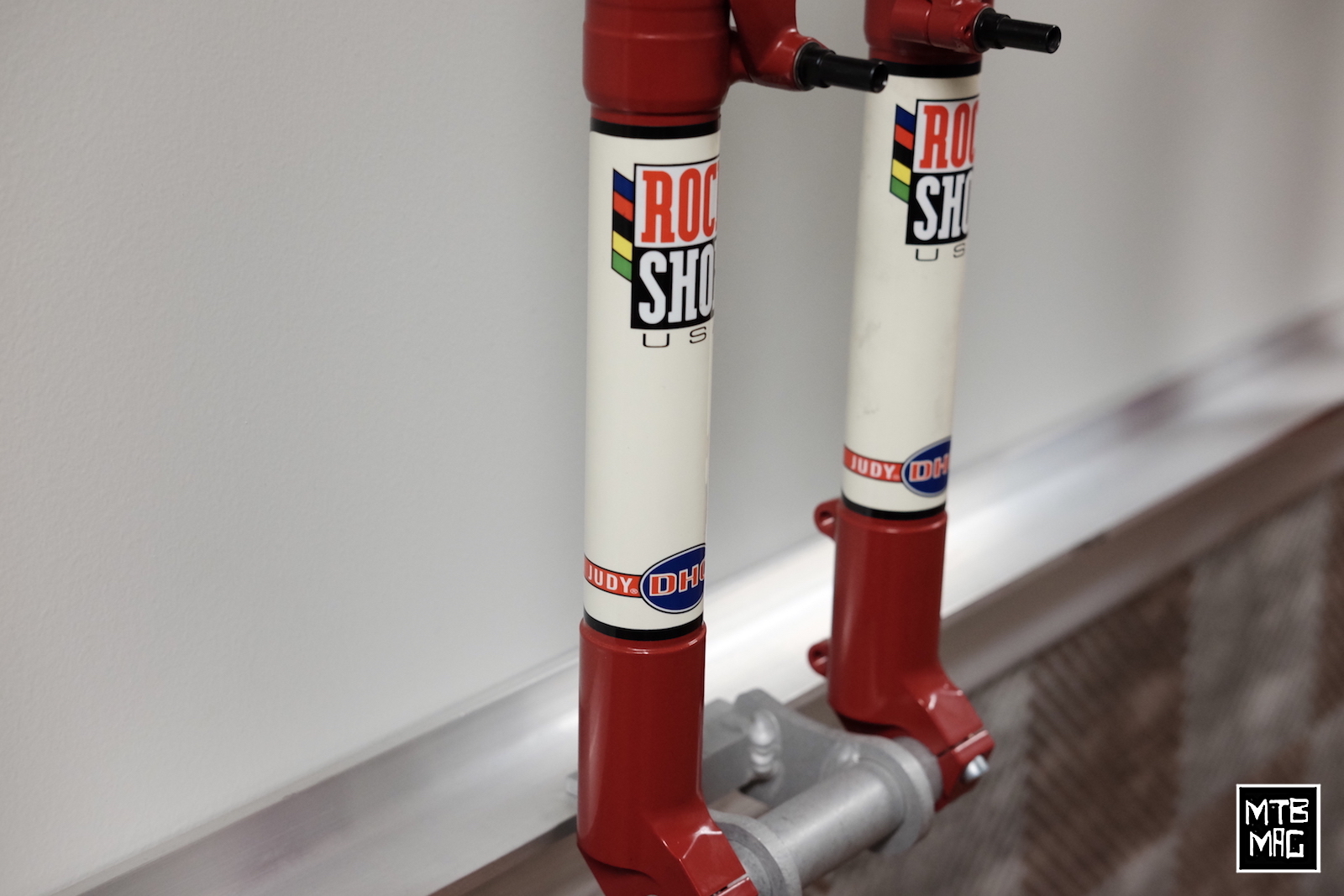 The travel of the DHO Judy reached the sustainable limit of its structure, with 100mm. But also following the BoXXer’s entry to the market, this dual crown Judy version would not be retired, instead it was appointed to the growing Freeride segment under the name Judy XLC. 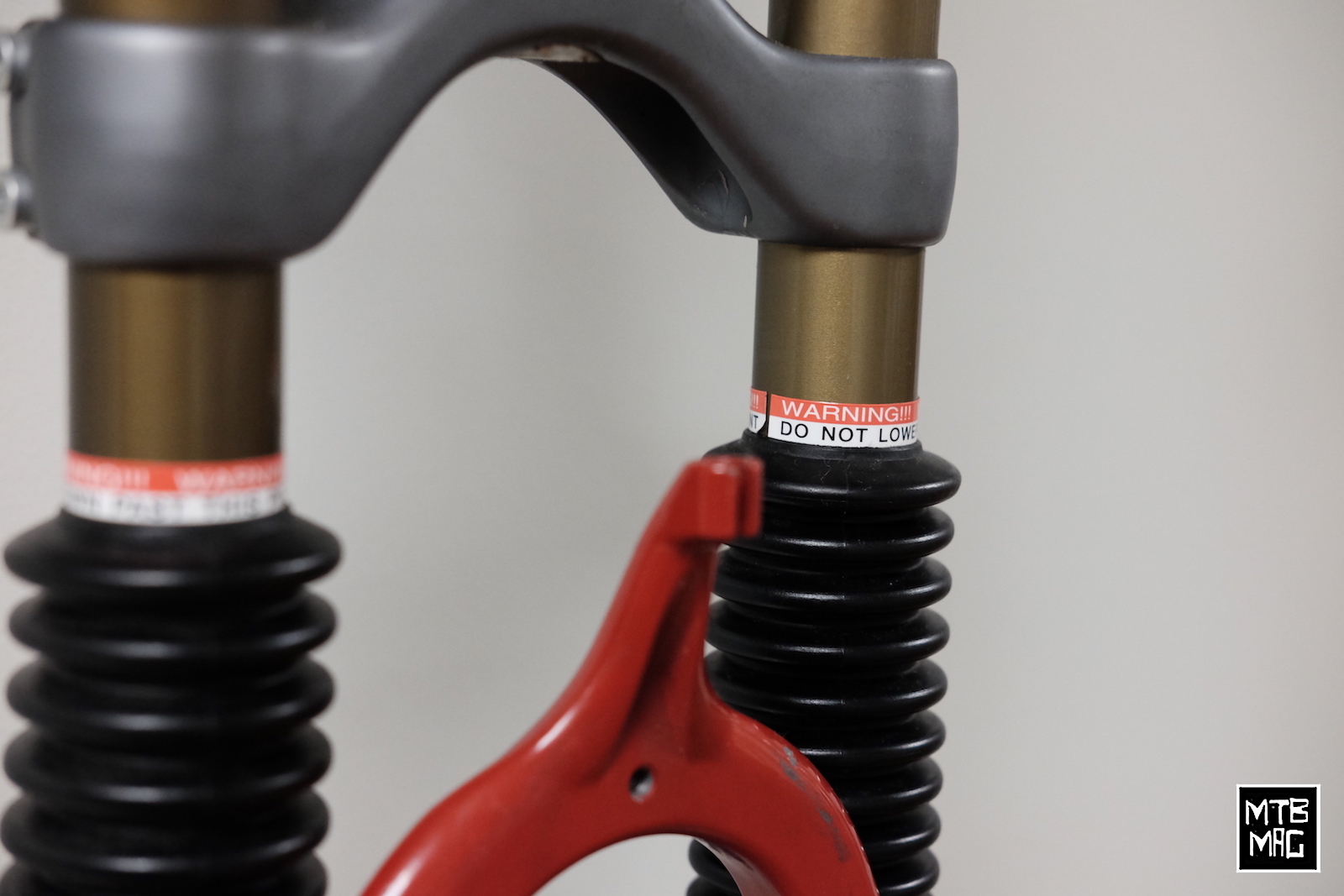 In 1998 the BoXXer PRO made its appearance on store shelves. It featured the HydraCoil cartridge, coil springs and 32mm diameter stanchions at 150mm of travel.  Basically, the same features of the prototype that the previous year saw in the hands of top riders. This is where BoXXer’s design took a futuristic leap. With lowers cast from a single forging, it still supported V-brakes, although, since they were less and less commonly used, the brake posts were no longer an integral part of the lower structure, but instead were applied optionally. 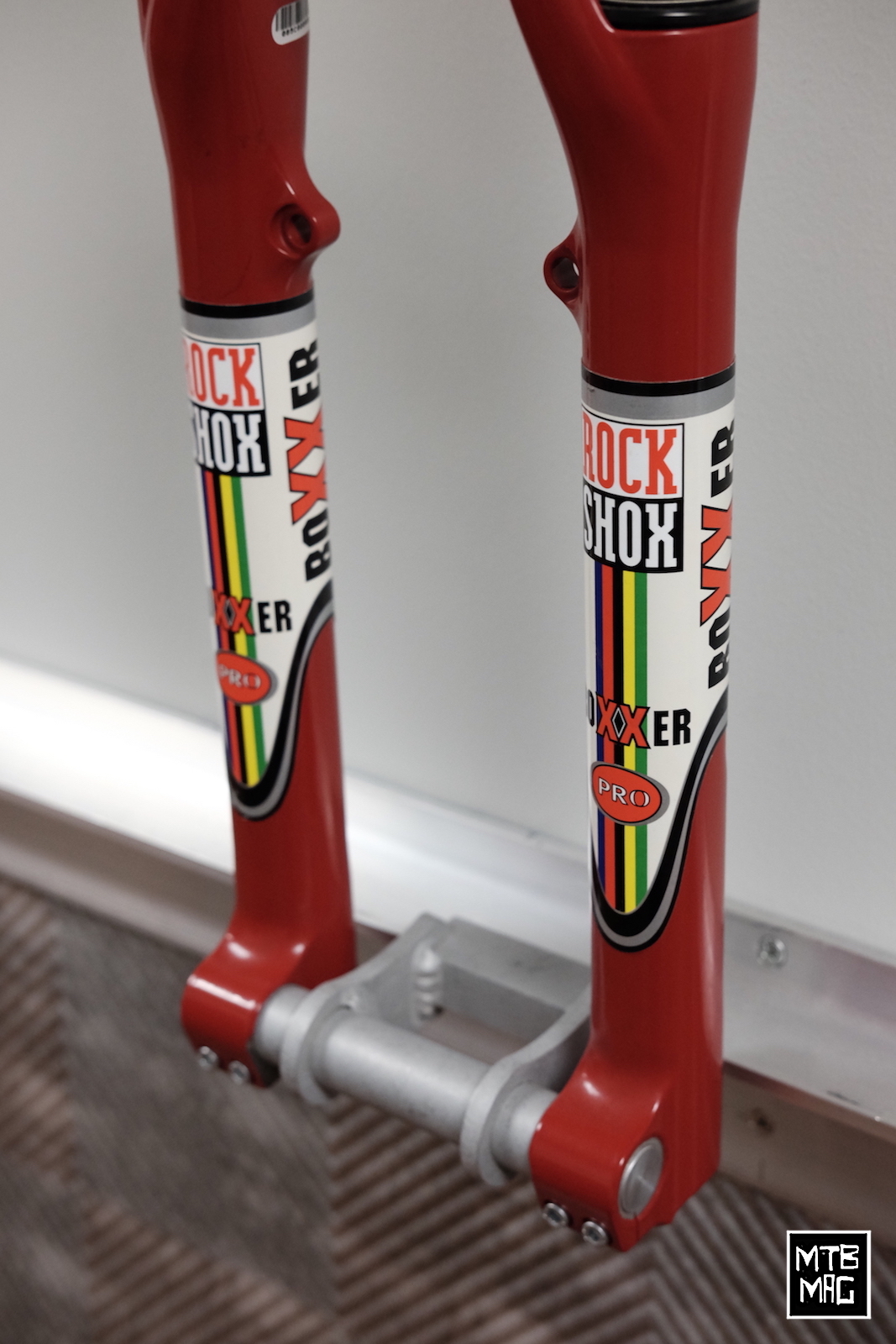 With BoXXer finally in mass production, the research and development department of RockShox chose to engage in a new project, with a prototype upside down fork. The fork never actually hit the market or the race circuit. With the right side up BoXXer’s well-established project already working successfully, the upside-down concept for long-travel forks proved to be a dead end road. The project was therefore abandoned but still scored a page in the evolutionary history of the research and development department of RockShox. In 2000, RockShox officially birthed the BlackBox program, namely the research and development which is responsible for following a select number of top riders and developing new prototypes and special details that, if proven, will then be adopted to production consumer models. Meanwhile BoXXer grows to 180mm of travel. 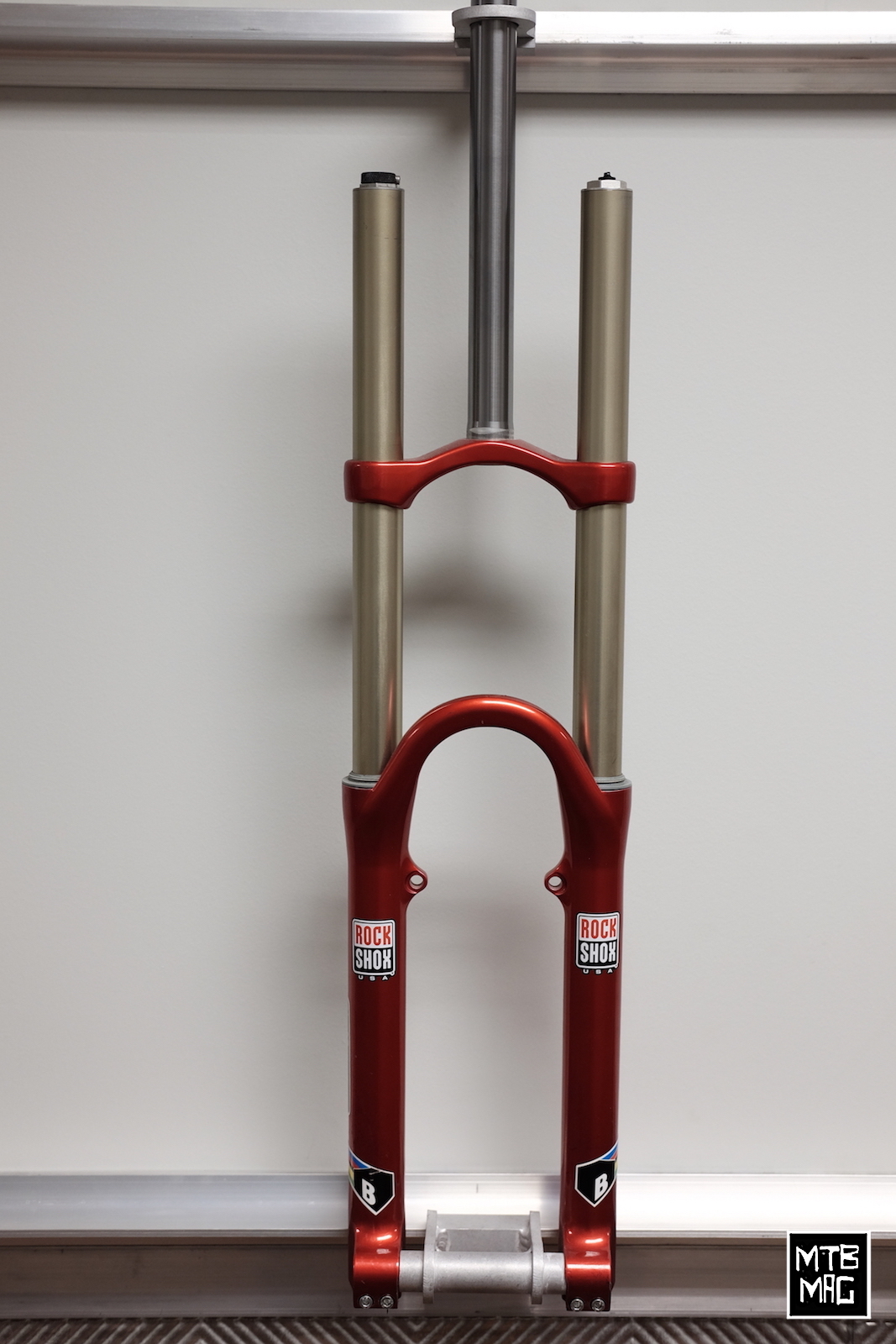 In 2001 the hydraulic BlackBox prototype was updated with the new JOE cartridge, able to better manage the increased travel of the new BoXXer model. 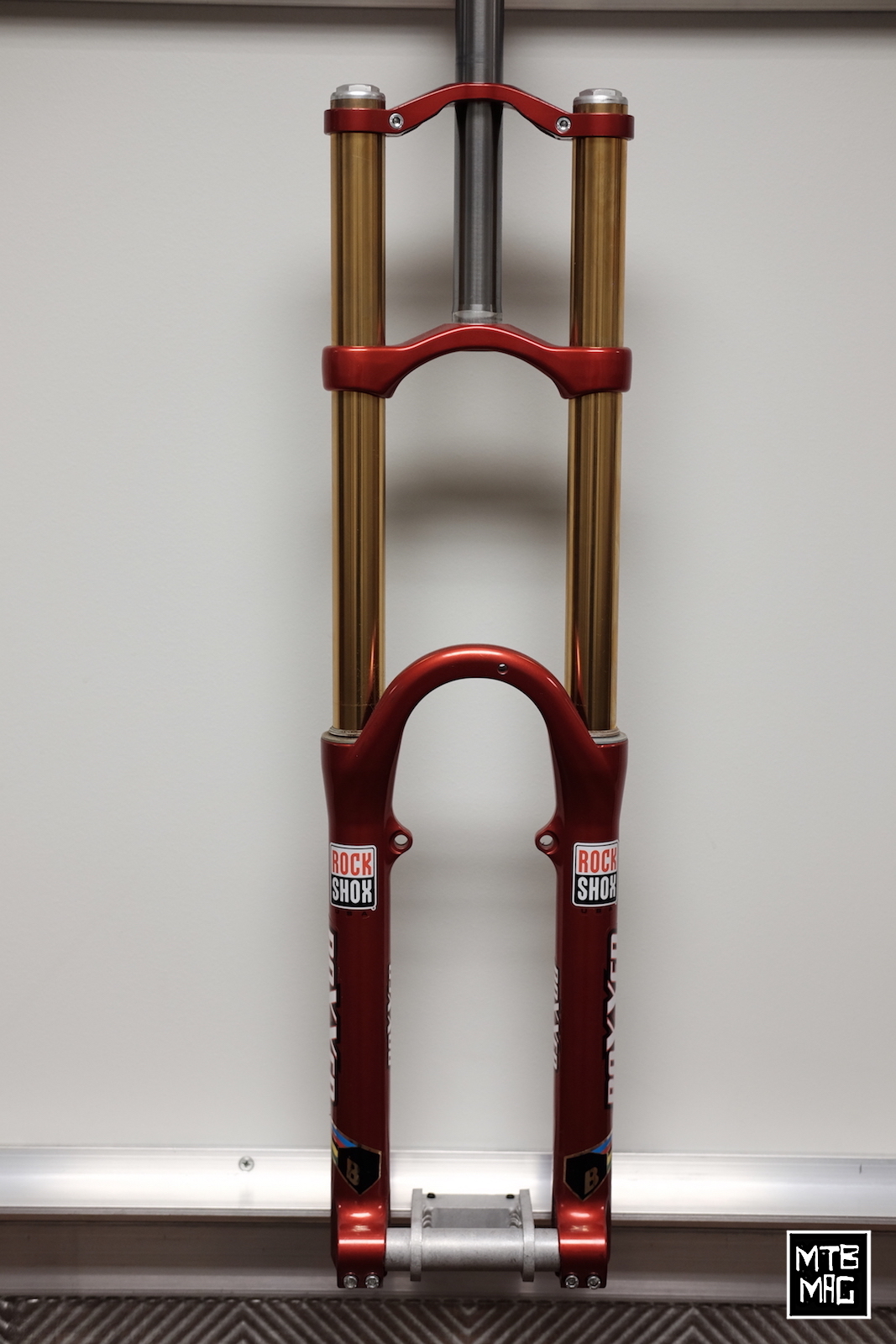 Some prototypes received a stanchion surface treatment of TiN (Titanium Nitride) that gave them a golden color and a harder surface with less stiction. The hole in the arch on the lowers is for fastening the front disc brake line. 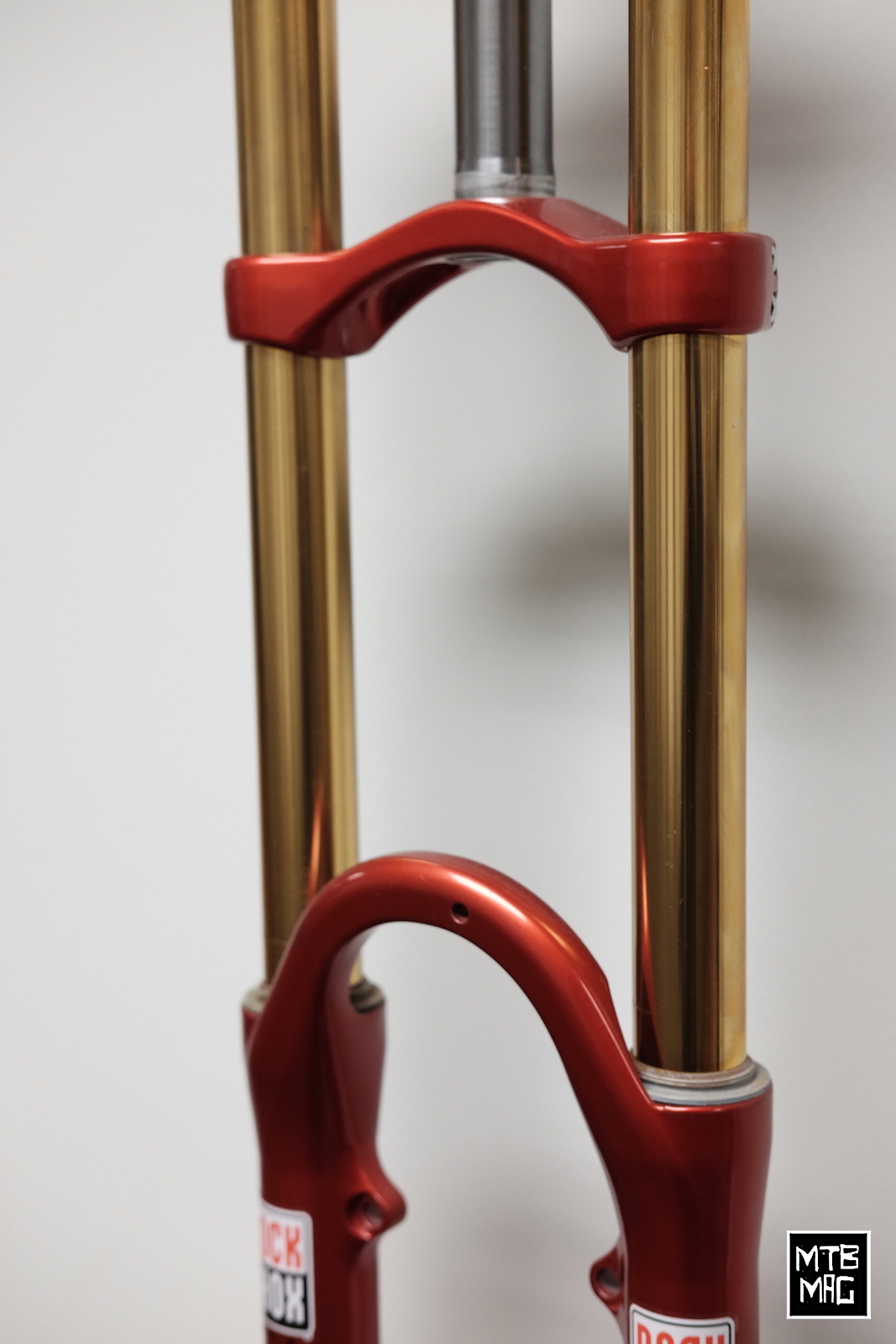 In 2003 the BlackBox JOE cartridge had undergone further evolution while the stanchions saw a treatment called Slippery Silver. The lowers finally were ridded of the real estate for V-Brakes. The fork below was used by Steve Peat and bears his autograph on the right side of the lowers at the base of the arch. 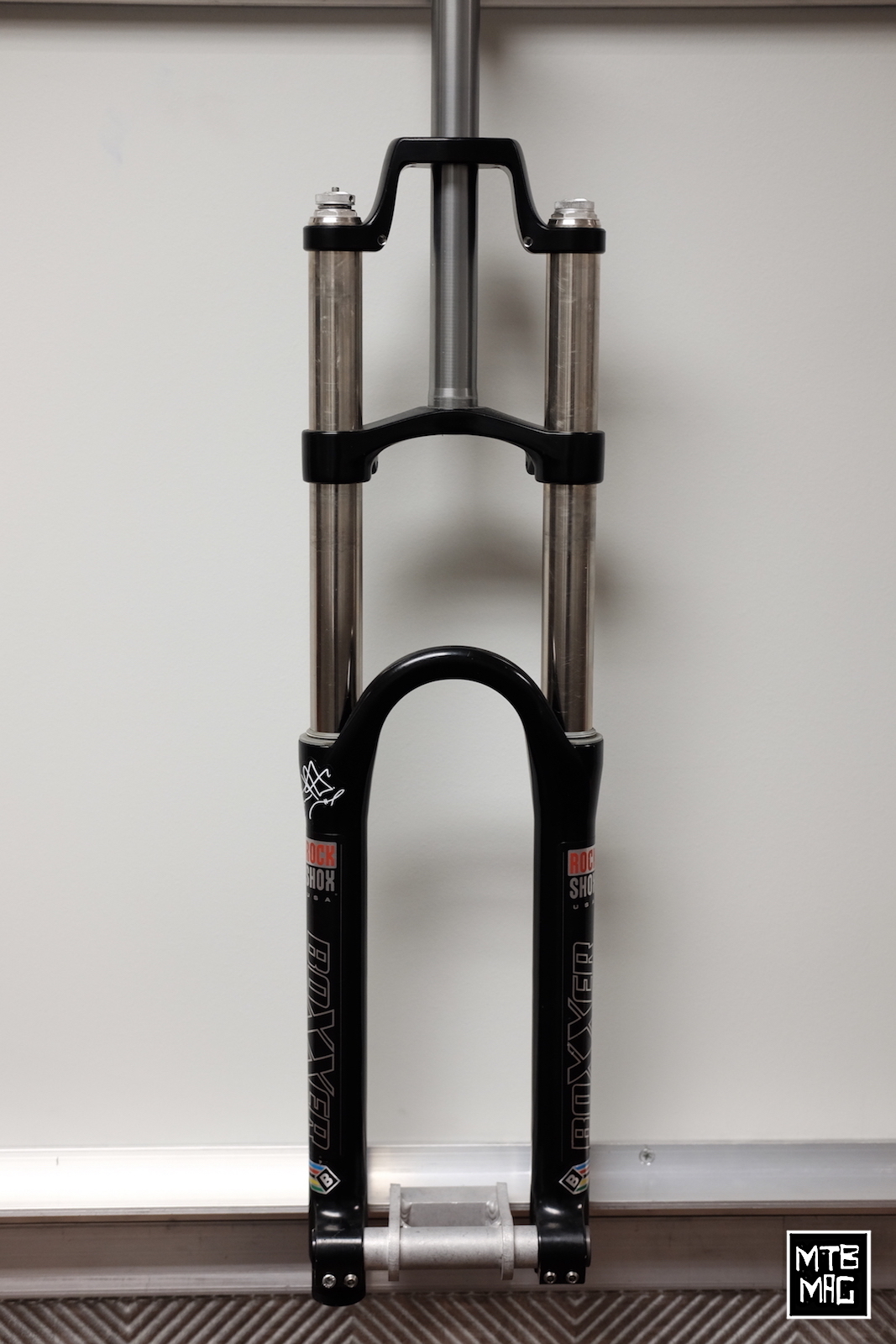 The year 2004 brought a distinct shift for BoXXer. The treatment on the stanchions remained Slippery Silver, but the travel was further increased again, reaching 200mm. 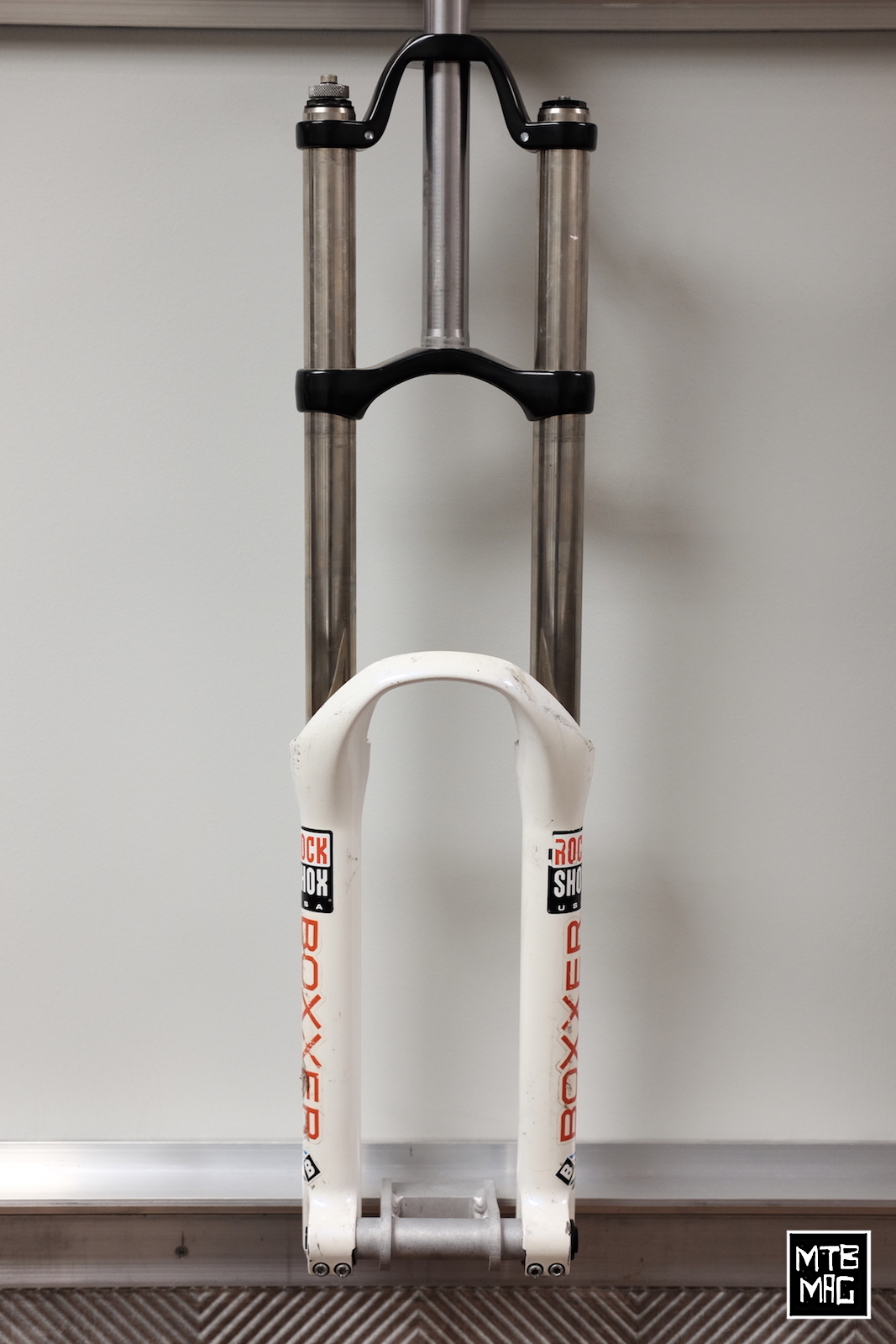 On the top of the right leg (left side in photo) we see rudimentary adjustments of the first Motion Control cartridge, which eventually went into production with anodized and better shaped knobs. On top of the other leg there are signs of an air valve. Yes, it was indeed the first Solo Air cartridge used on a BoXXer fork, which kicked off the World Cup version in mass production. 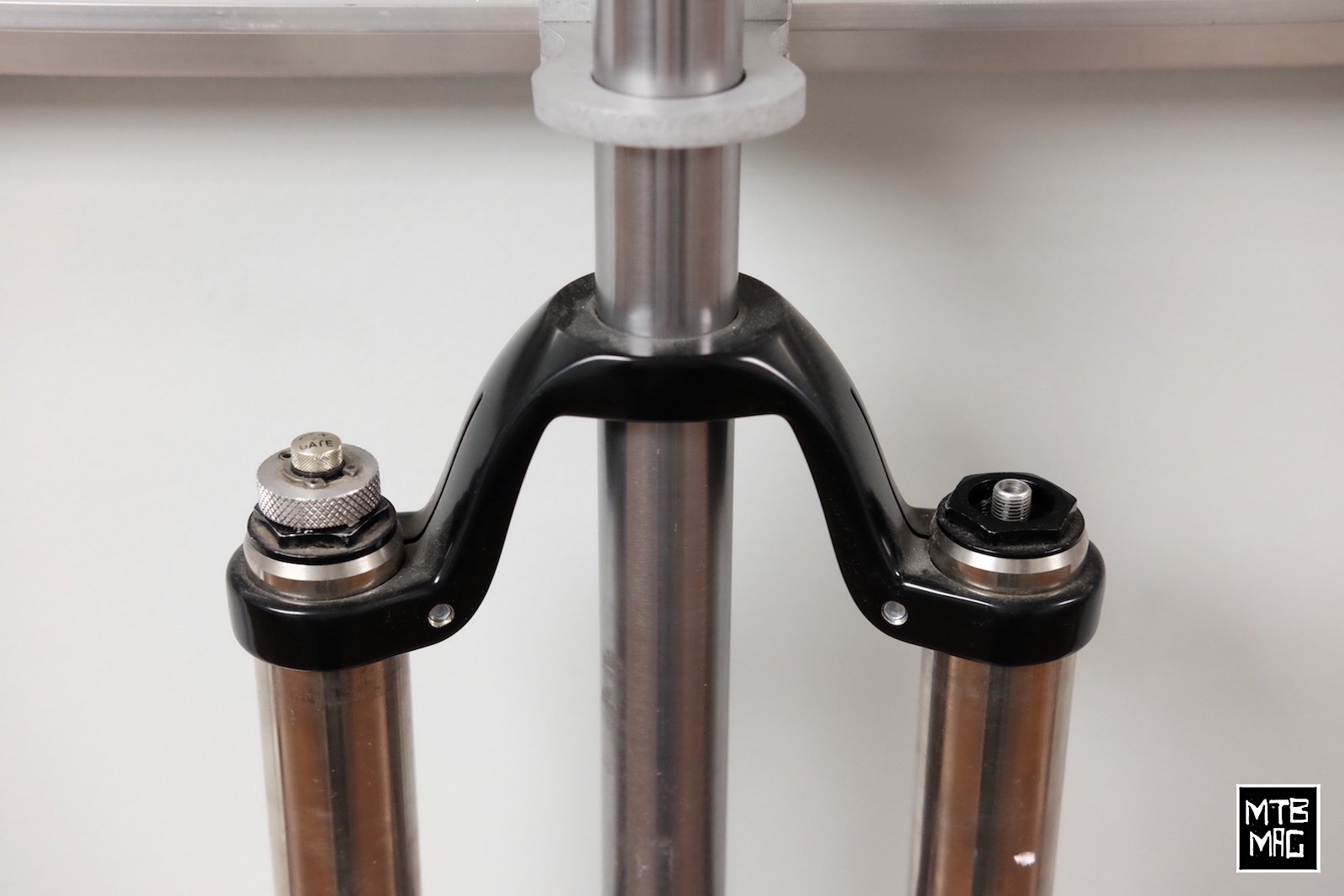 In 2008 the top riders of the BlackBox program were given a brand new, completely redesigned BoXXer. The first Mission Control was born. The new cartridge received independant compression adjustment for high and low speeds. The air spring remains the Solo Air cartridge. 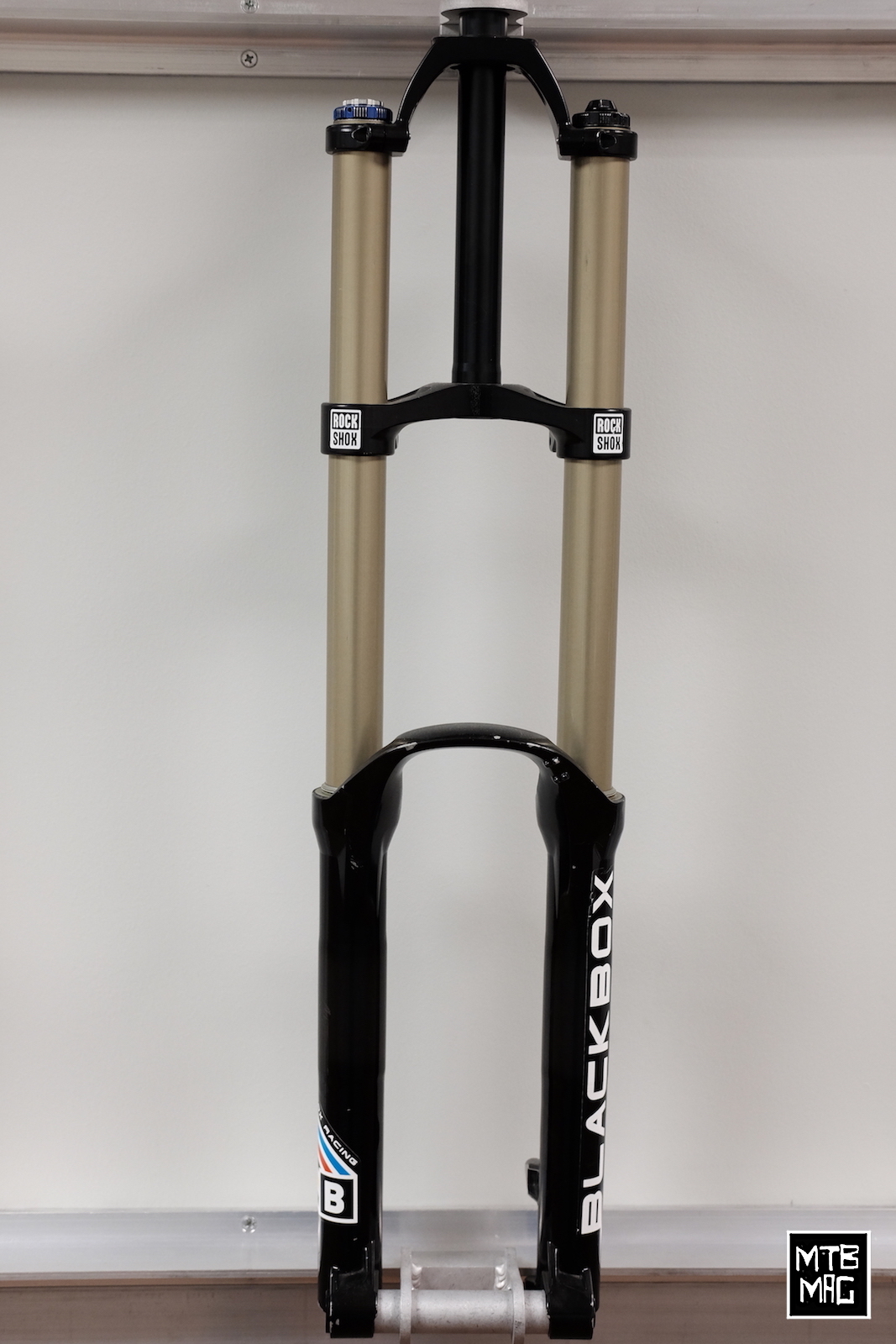 The size of the stanchions increased up to 35mm in diameter and the lower leg assembly saw a complete redesign, with a more rigid arch and the new Maxle axle. This is the new BoXXer that went into production in 2009. 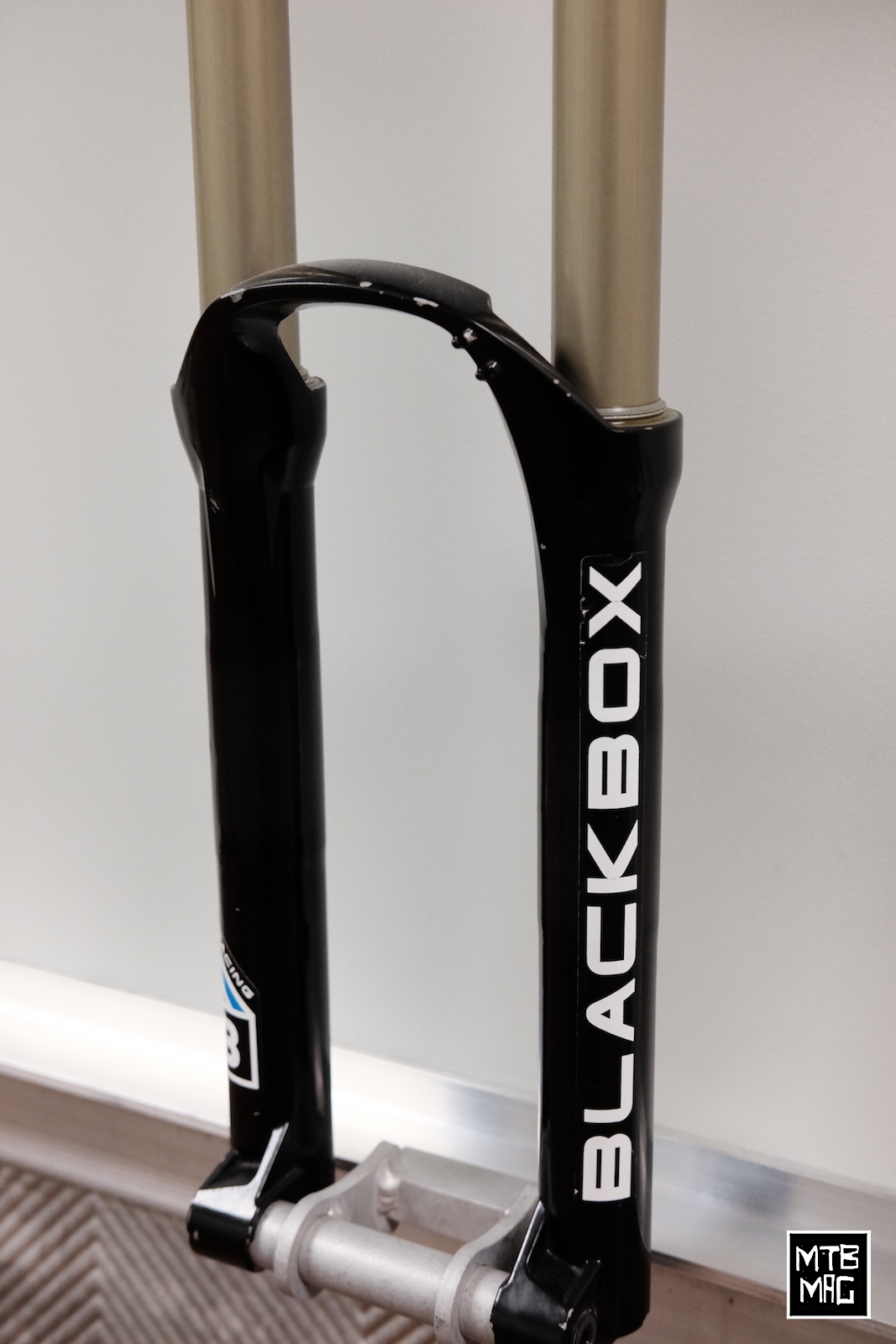 In 2009 BlackBox prototypes appeared with a stanchion finish called DLC (Diamond Like Carbon) – smooth and hard, it provided increased smoothness and wear resistance. 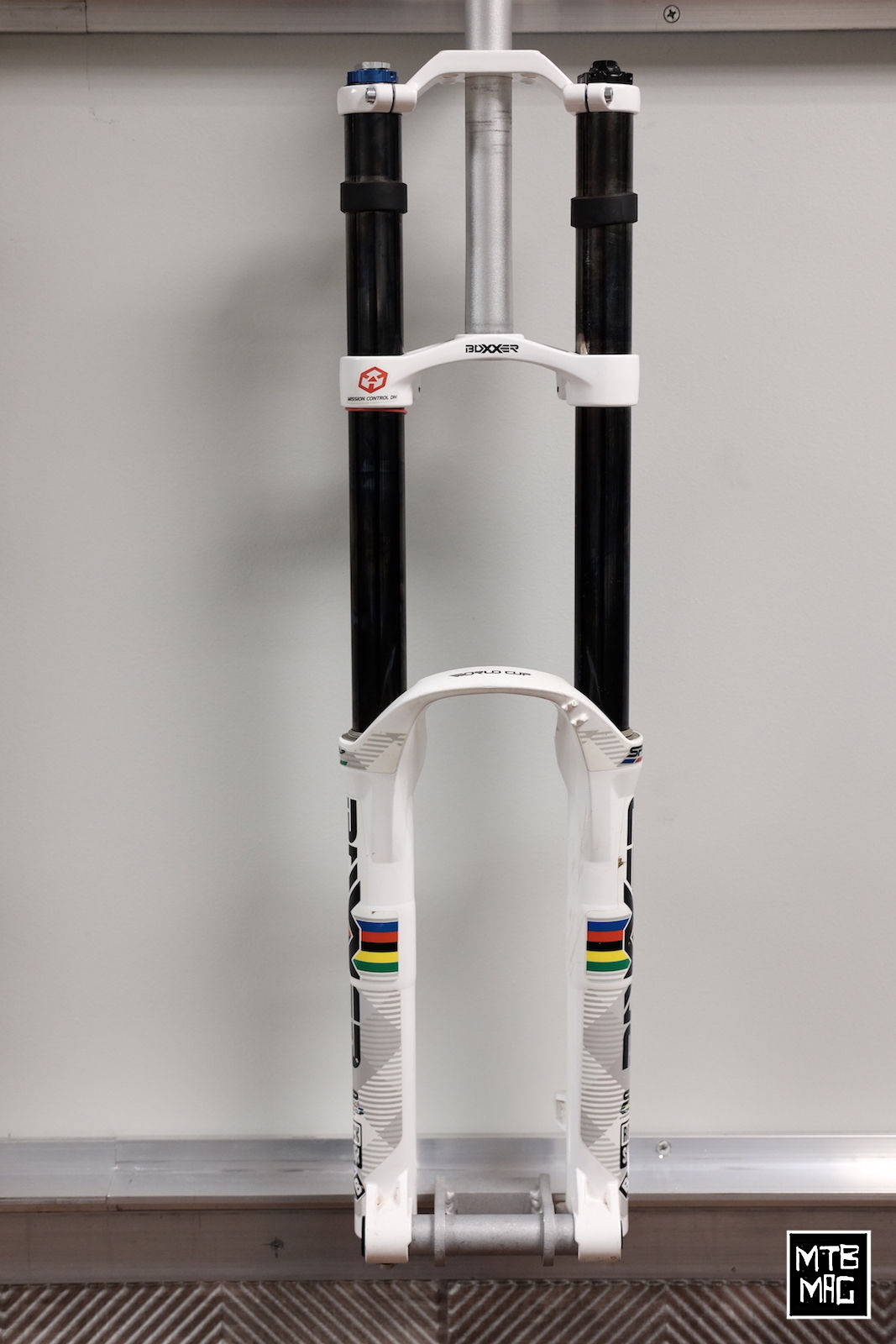 With this prototype Steve Peat finally won his first DH World Championships. 2009 in Canberra (Australia). It was the pinnacle of his career. 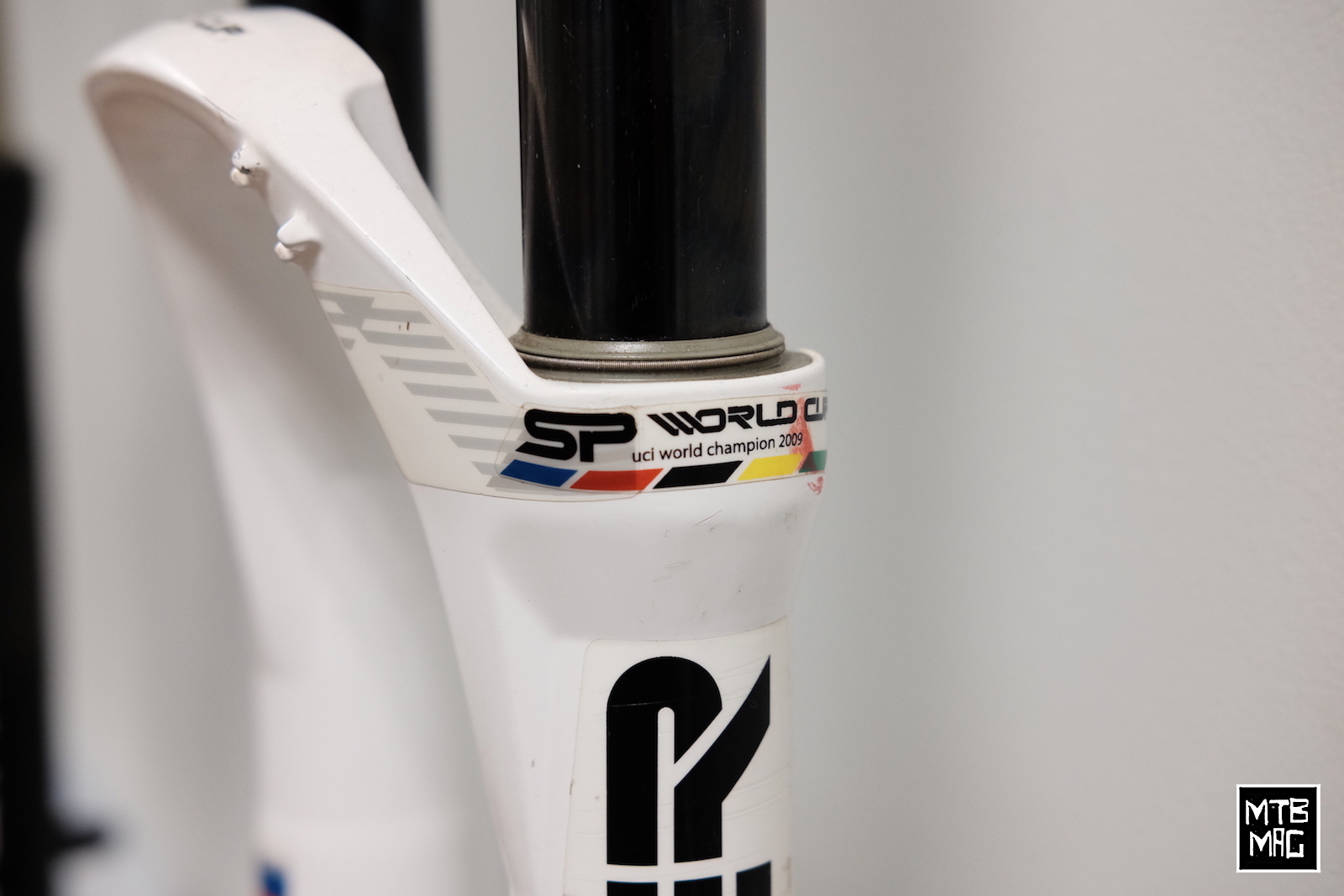 Those decals following Peaty’s world title, with his initials and World Champs colors. In 2014 the first BoXXer for 27.5 wheels went into production. In addition to the new standard wheel size, the new BoXXer also saw the introduction of the Charger cartridge damper; it still currently equips the standard forks. The Solo Air cartridge has also been updated with a larger volume negative chamber. The graphics of BoXXer in the picture below are the 2016 model year. They bear the logo of Steve Smith, with the dates of his birth and his untimely death. A small but significant commemoration for an exceptional person and top RockShox athlete. The forks shown in this article are displayed in the hall of fame at the Colorado RockShox office, in the corridor leading to the offices of the staff.