GT marketing manager, mountain bike rider and all around good guy Andrew Cho suffered a paralyzing injury and will be faced with insane medical costs. If you can spare a few bucks to help out at all, here is the link to his GO FUND ME account. This horrible news posted last night and people from all over the world have pitched in to raise almost $31,000 already. 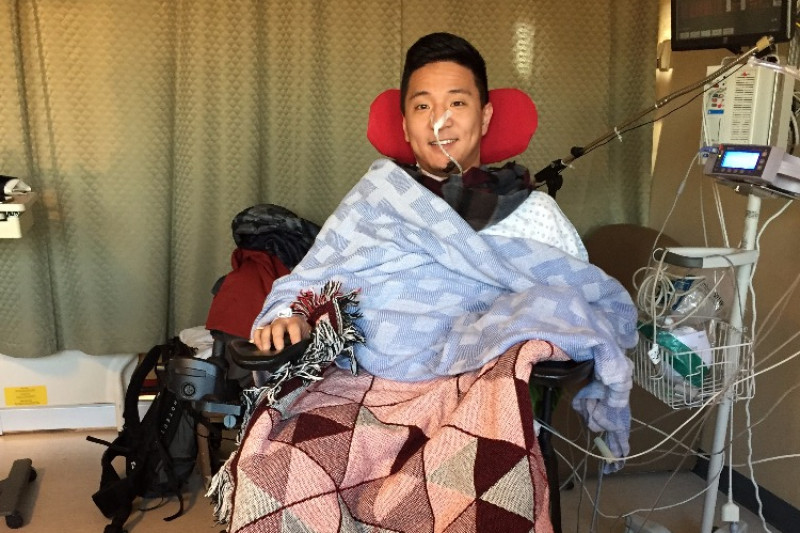 On January 6th at approximately 8PM, our dear friend, Andrew Cho, suffered a serious spinal cord injury which resulted in paralysis. At this time, he has regained limited mobility, but his future remains uncertain.

Andrew was at a dinner with friends when he started to experience dizziness along with numbness in his neck and outer limbs. Unbeknownst to him, he had a burst blood vessel in his C3 and C4 vertebrae.  The cause of the burst blood vessel is still unknown. Andrew decided to head home early to rest. Once at home, the symptoms became more severe. Since he was home alone, Andrew decided to unlock the door in case paramedics were required.

When he stood up, the blood vessel had reached its tipping point. The trapped blood applied so much pressure to his spinal cord that it paralyzed him from the neck down.

Despite so many things going wrong with the situation, there were many fortunate events that saved Andrew’s life. His phone landed ten inches from his body. In an amazing feat of strength and survival, he was able to inch toward his phone using only his chin. After five unsuccessful attempts, he was able to use his tongue and with the help of Siri, dial 911.

When first responders arrived, he was rushed to VGH where he underwent a 4-hour emergency surgery to relieve the pressure on the spinal column.

Since the surgery, there have been many positive steps forward. Andrew regained limited mobility in his right side four days after the surgery. With the help of daily physio, his movements and strength on his right side have slowly been improving. However, his left side has been slower to respond. Andrew now has feeling down to his biceps, but movement is still very limited.

Although medical staff are encouraged by Andrew’s progress, they are very quick to emphasize that Andrew still has a very long road to recovery and he is in for a long, difficult year.

We are anticipating that Andrew will be unable to work for at least the next 12+ months. There will also be a tremendous amount of medical expenses as Andrew adapts to his new lifestyle. Rehabilitation, home and vehicle modifications, medical equipment, medications & supplies, and personal assistance are just some of the costs. Although this occurred in Canada where he has access to insurance and Health Care, the costs associated with paralysis are quite significant and often exceed $3 million in a lifetime.

For that reason, we have started a Go Fund Me campaign.

Andrew continues to impress us with his positive outlook, and determination to “walk out this mother f**ker”. Of course, this should come as no surprise to anyone that knows him, as he has always faced each and every day with courage, kindness and adventure.

Andrew is the kind of person that would drop anything to help a friend – even if it meant driving down the coast of California or a spontaneous trip to Europe. Whether it’s the next adventure or to simply comfort you during a quarter-life crisis, Andrew is always there. For these reasons and many more, let’s come together and show this unbelievable friend our support.

Thank you in advance for your support, well wishes and for those of you that are able to visit, your time.