[ad3]
Fox recently sent us a new Float X2 to test on our Scott Gambler DH rig and as this new unit is a complete departure from anything they’ve done in the past, it got us thinking that it would be interesting to interview one of the engineers that was responsible for its development – Bill Brown. Bill oversees a great deal of the direction that Fox takes year to year. We headed to Scotts Valley, California for lunch and a chat with him, where he would glean some insight into the inspiration, inception and R&D that went into the new Float X2 and DHX2. 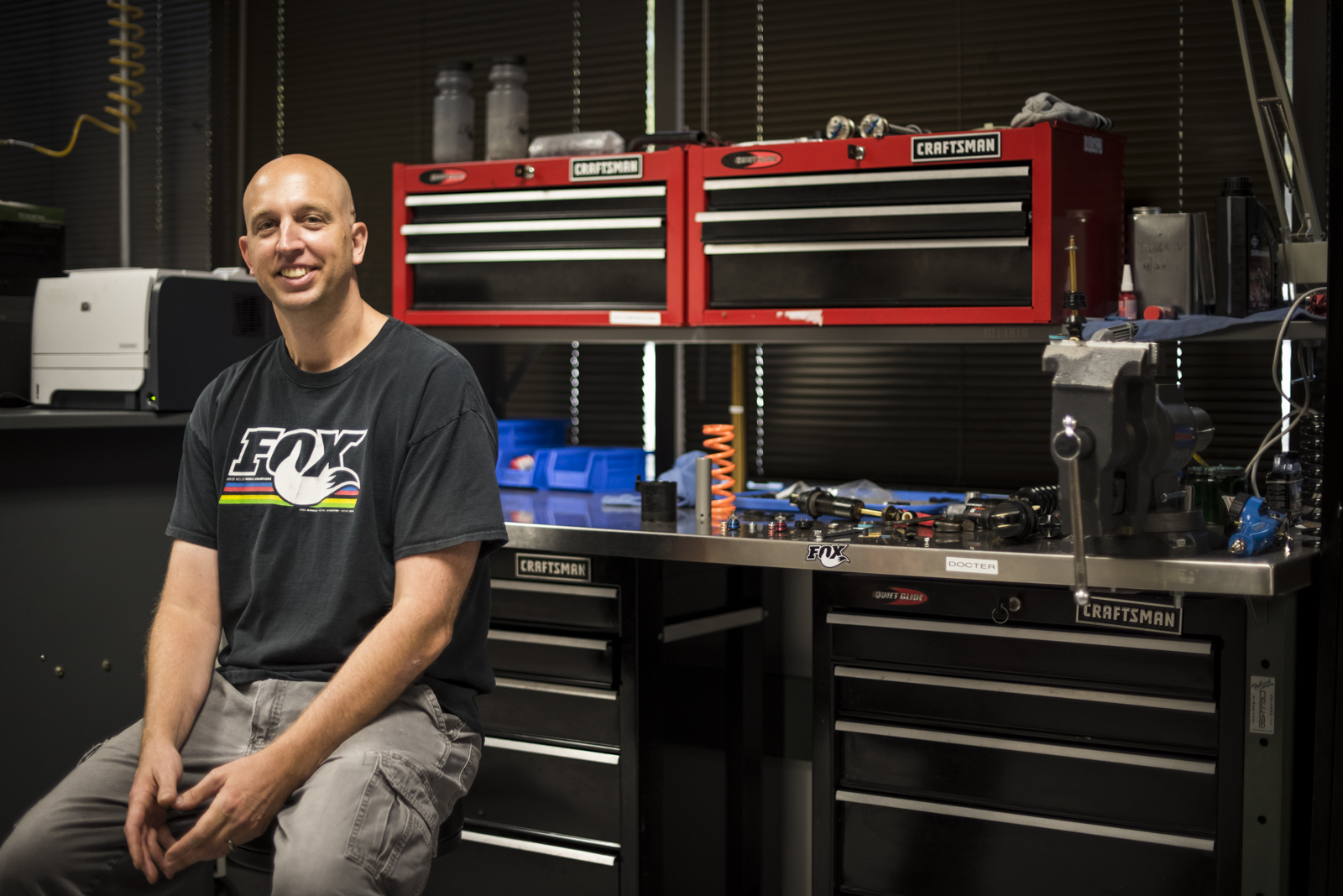 MTB-MAG : Thanks for having us Bill, so what’s your official title here at Fox?

MTB-MAG : What was your background? How did you get into MTB and Suspension?

Bill : I’ve always ridden a bike and I started mountain biking in 1993 in Florida of all places. It was unique and I miss it. There are some good trails in FL. You won’t find the elevation but you will find some challenges – people there are just as passionate about bikes as anywhere else. Anyhow, I went to University of Florida in Gainesville and studied Mechanical Engineering. I actually raced in an XC series in while I was in school (someone in the background jokingly yells – “That’s a false statement”) My very first bike was a Haro.

Bill : Well, next I bought a Dagger. They were a Laguna Beach brand that took an AMP research rear triangle and put it on their front triangle. I worked all summer of my first year of college to save up for that bike, then I raced on it for the next few years. I was definitely the only guy racing XC on full suspension – in Florida. Good times. Eventually I started riding more Moto, got married, built a house, and had a baby on the way. Then some friends at work started mountain biking and I got back into the sport through them in 2003. I wanted elevation and cooler weather so I started looking for jobs outside of Florida. I wasn’t necessarily looking to be in the bike industry but the thought of it appealed. Fox was one of the companies I sent my resume to and they hired me, so I moved out here. 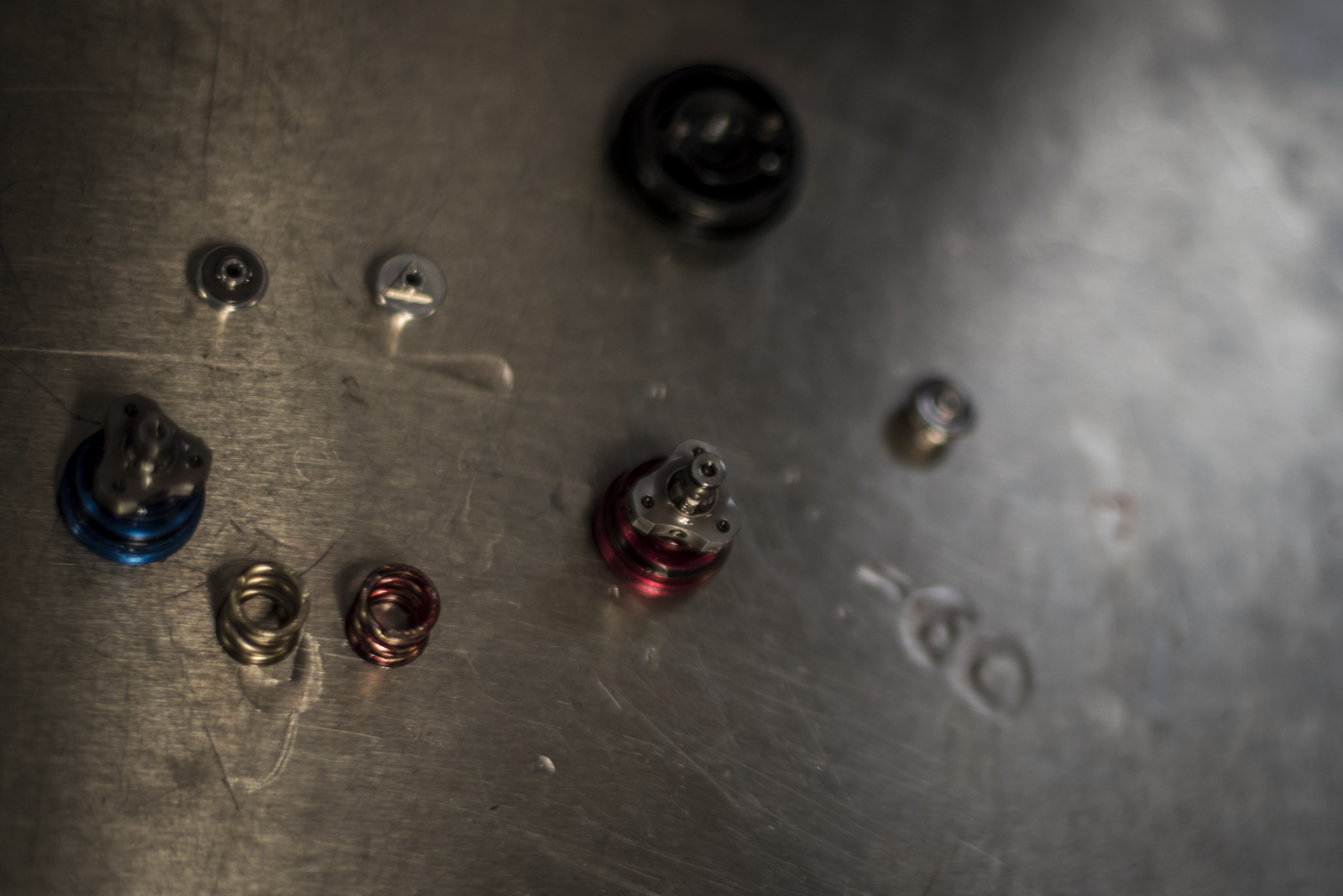 MTB-MAG : As a mechanical engineer, did you study hydraulics?

Bill : As part of the base course curriculum but it wasn’t the focus. In Florida I worked for an aerospace & defense company and I spent most of my time working with robotics and mechatronics. Fox was my first exposure to hydraulics in the work place. It was enjoyable though since it had a steep learning curve. The team here is great and we have incredible engineers who are also really talented riders – a handful at the pro level. It’s been a great move coming to California and getting completely immersed in this stuff and working at Fox.

MTB-MAG : OK, so let’s talk suspension. You guys obviously had a complete redesign for gravity shocks for 2015. What catalyzed that and sent you back to the drawing board?

Bill : Two things really. Around 2013, we introduced the re-valved 2014(model year)RC4 and the development effort in doing so, ultimately lead to the DHX2. The effort there was really to improve response time and reduce hysteresis in the damper. The way we went about that was to lower pressure inside of it. We took the RC4 architecture as far as we could and the result was what we launched in 2014. It rode well and we were happy with it but around that same time, Bob Fox was ready to come out of retirement and get his hands dirty. He was a huge motivating factor behind the X2. Our pursuit of improved system response time, eliminating hysteresis and attaching that to low system pressures is what drove us to the X2 platform because we can operate on much larger areas. For example, a lot of the damping on the RC4 is driven by the oil displaced by its shaft, which is a lot less area than the damping being driven by the piston. Working off of piston area rather than shaft area resulted in much lower pressures, and much better handling of direction reversals. Those direction reversals happen thousands of times in a run.

MTB-MAG : So in simple terms you guys went from a monotube shock to a twin tube or “recirculating” shock?

Bill : Yes, our powersports division has had a great deal of success with their shocks. Specifically, for Baja race trucks and the units we supply for the Ford Raptor. 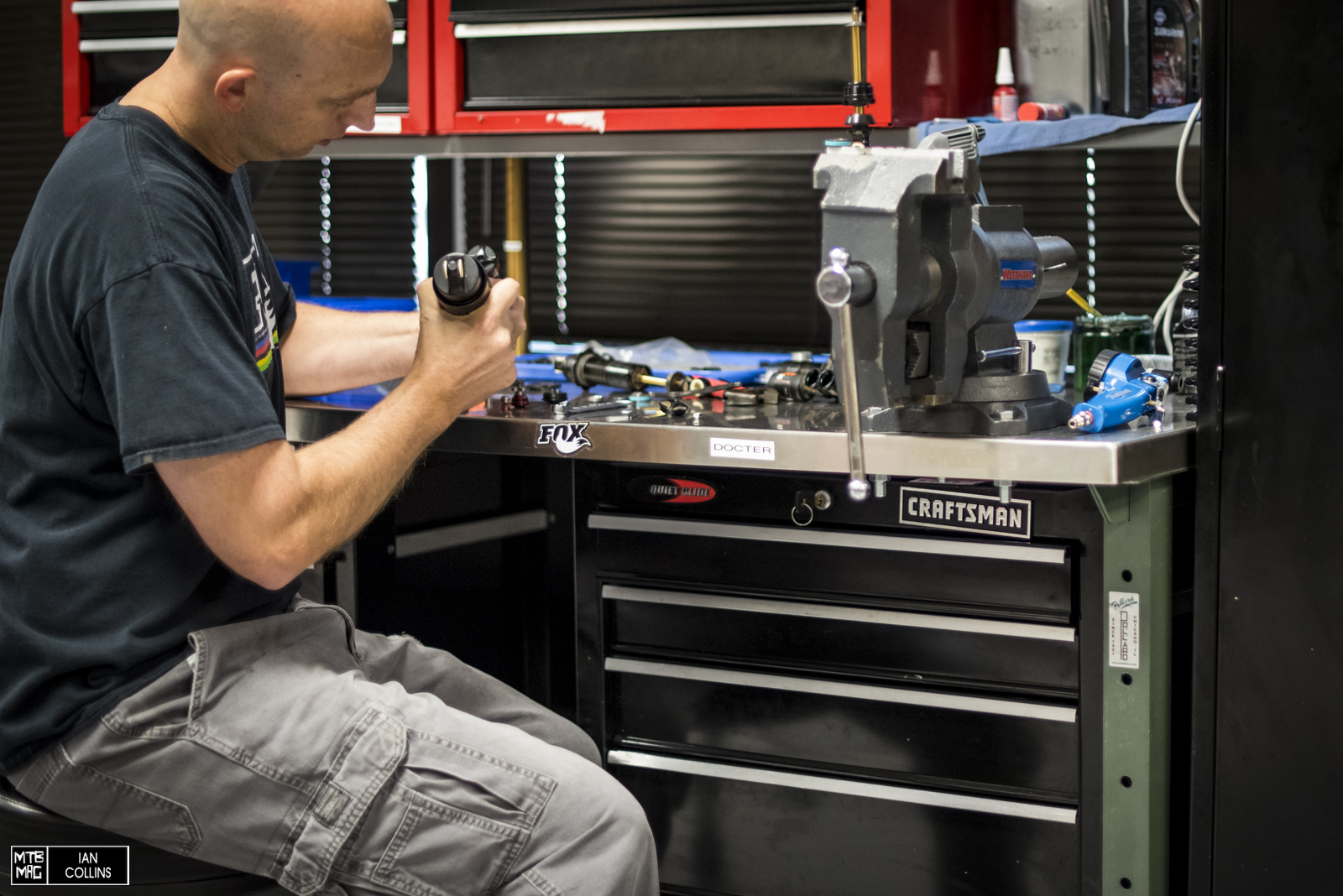 MTB-MAG : Pardon our ignorance, but don’t those shocks utilize bypass valves though?

Bill : Yes, but those are in place to handle specific vehicle dynamics. Aside from that, the architecture is fundamentally the same. They operate at lower pressures so we wanted to explore that for the bike division. Our first milestone was with some early prototypes. We were riding them internally but wanted to see how they’d perform at a World Cup level so working with our race manager Mark “Fitzy” Fitzsimmons, we decided to take some to South Africa at World Champs. We put Minnaar on one and just wanted his feedback. He won 2013 World Champs on it that weekend so we knew were headed in the right direction. The production shock is the 3rd incarnation.

MTB-MAG : When did you guys first start dabbling with the new damper?

Bill : 2012 – so 3 years in development, but we raced on it quite successfully all year last year. We won the overall and world champs.

MTB-MAG : So do the new shocks use more oil volume or run cooler because of the twin tube design?

Bill : Not really, they just operate differently over a larger area so they’re less prone to fade than a monotube damper. They also use lower charged pressures. 125psi vs. up to 200 psi for the RC4. 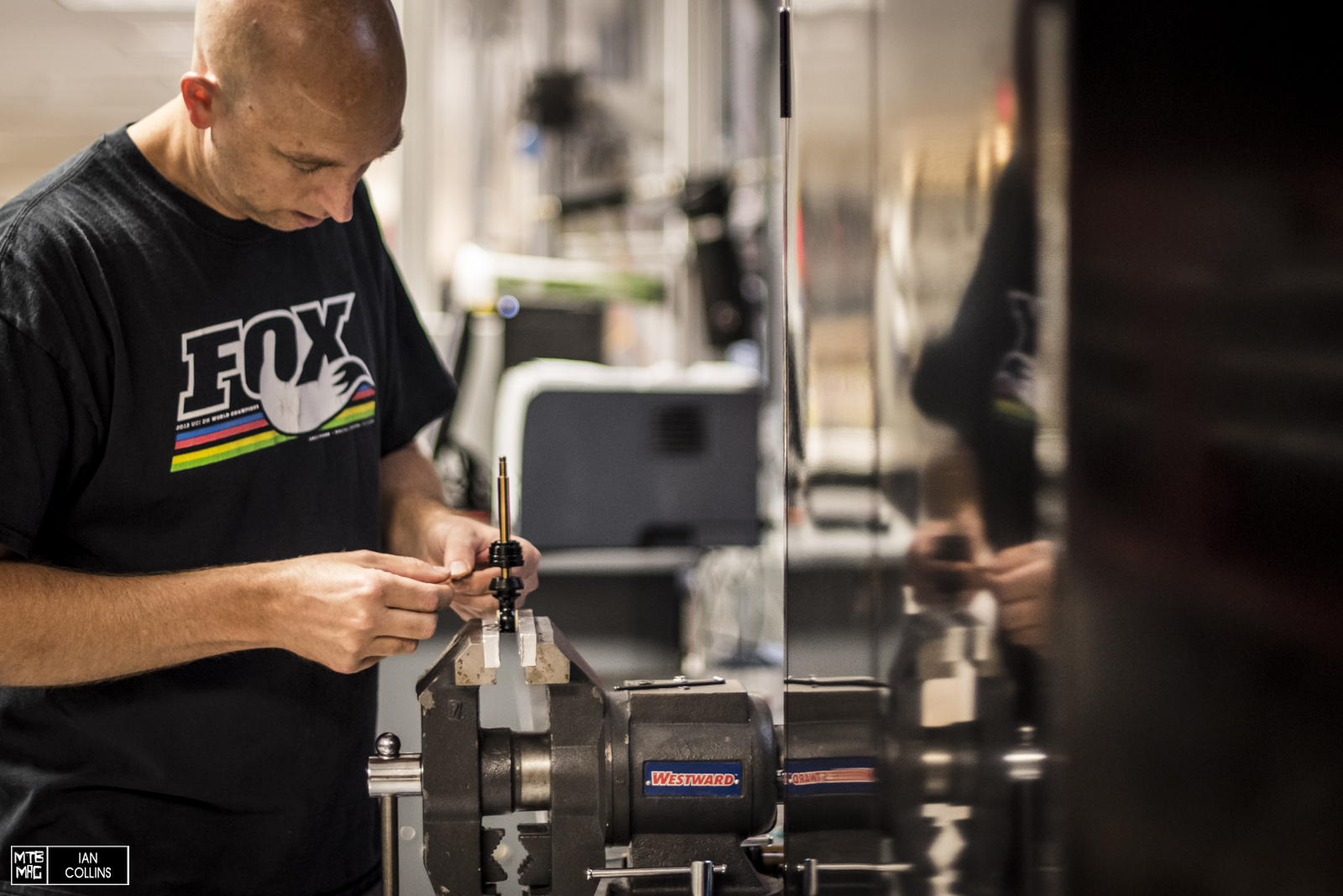 MTB-MAG : Will you guys explore recirculating shocks for trail/enduro units?

Bill : We’ll let the market dictate that as we give the market the options 😉

MTB-MAG : So there could be some experimenting with it?

Bill : Yes, and it may or may not be simply a module that you drop into a shock that you already bought. For now – I can’t confirm or deny. 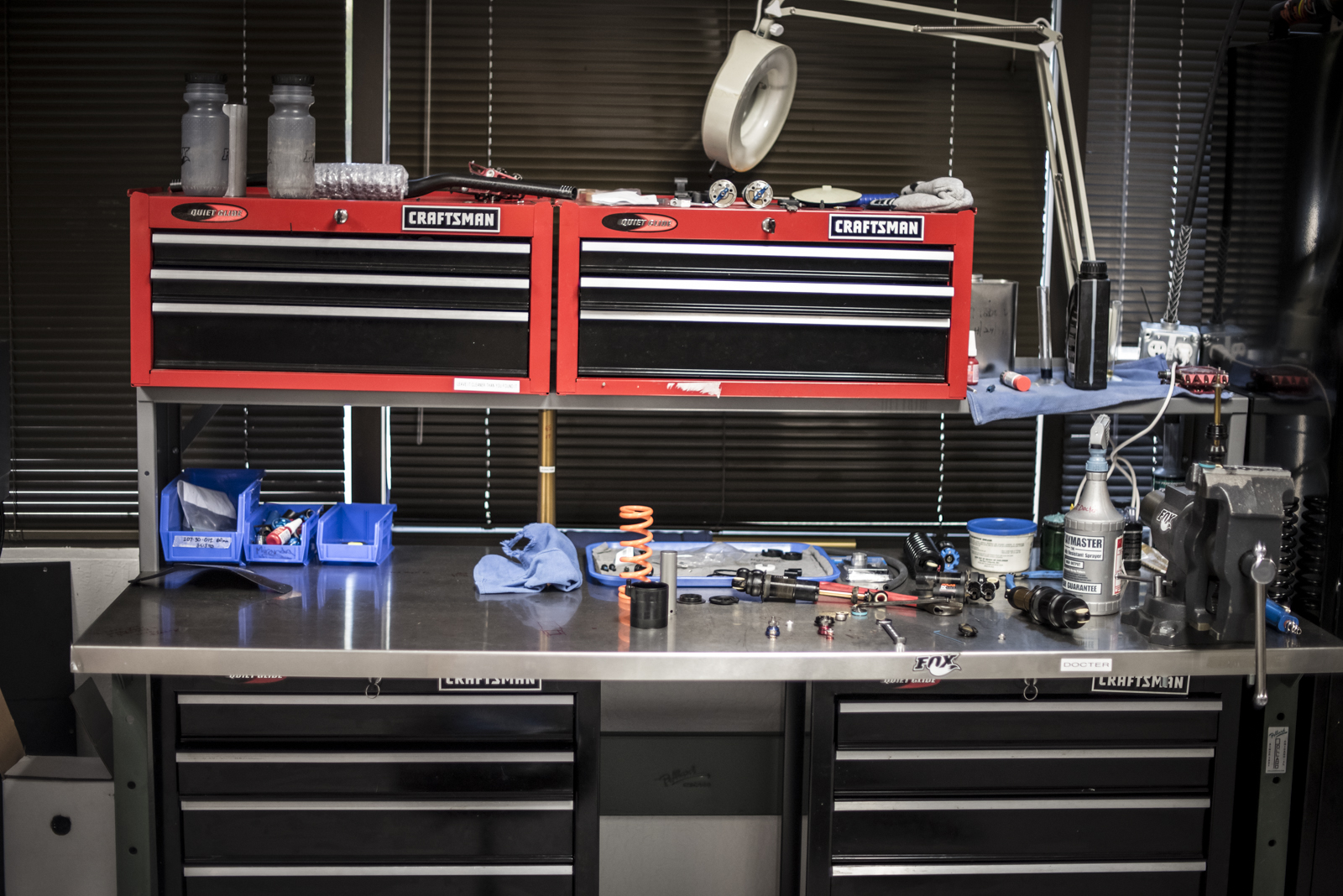 MTB-MAG : But would the really light duty inline shocks ever see a switch to a recirculating system?

Bill : For really light duty shocks we’ll struggle to justify the weight increase vs. performance gains that actually come with it. At some point, the weight of the bike becomes more of a driving factor.

MTB-MAG : When you discuss how much usable range the recirculating dampers have, in terms of off the shelf shocks, does Fox just have one tune for everything? Do you guys have A,B,C tune? Or do you guys just have recommended settings for each individual application?

Bill : For the X2 shocks there is one tune because the range is wide enough. For inline shocks and Float X’s there is a recommended tune and suggested # of volume spacers based on weight, ability and application.

MTB-MAG : Would you say that setup requires the user to be more meticulous with note taking, testing and setup with these shocks? 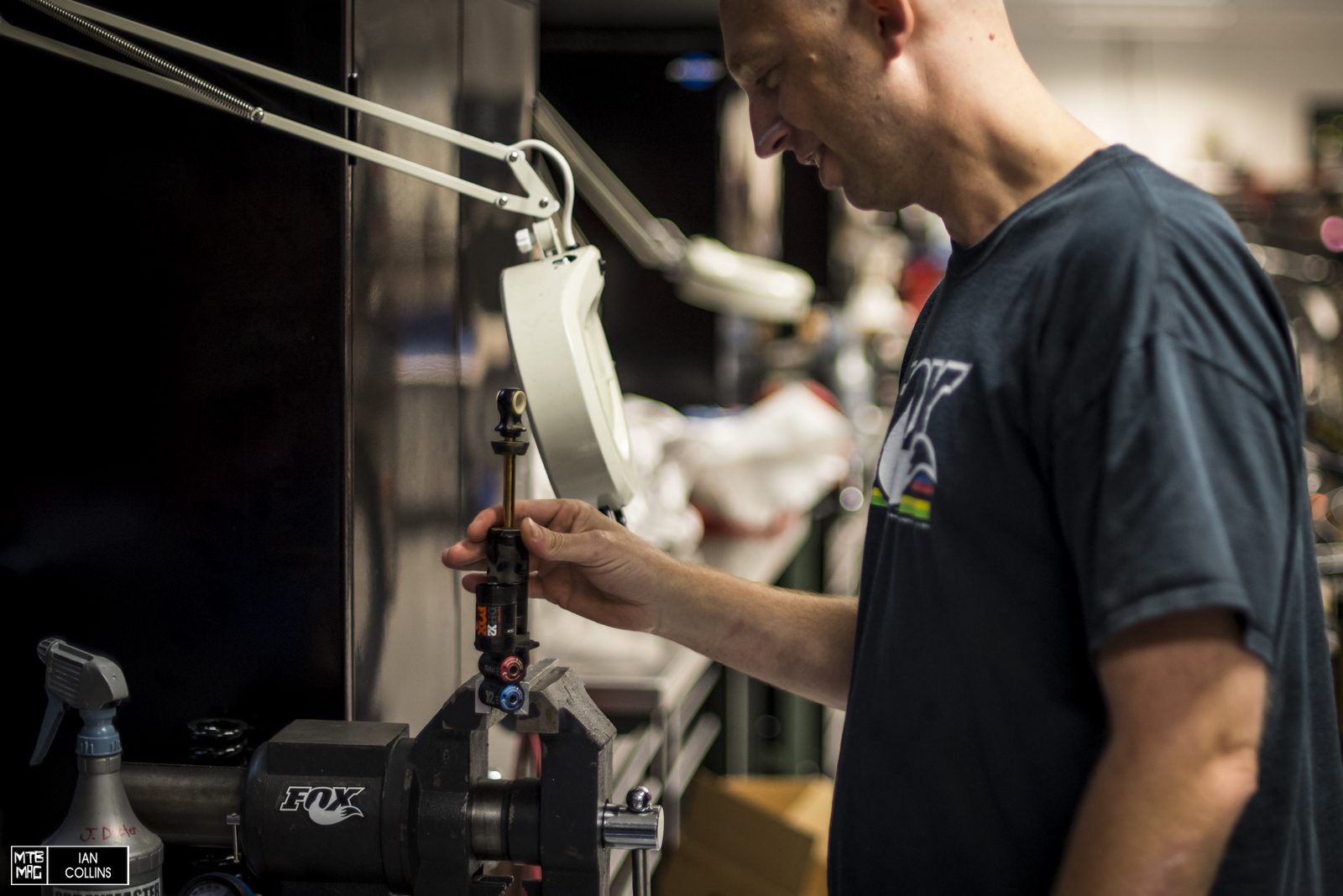 Bill : Absolutely, it was one of our biggest concerns with introducing the X2 shocks.

MTB-MAG : No offense to the uneducated consumer, but when you give them that much range, you don’t want them to have a bad impression because they overlooked a couple steps, or didn’t want to spend time dialing in their setups, right?

Bill : Yes, you can easily make X2 shocks not ride well, or any shock for that matter. That said, we provide really good tuning guides to really help our customers take notes and hone in on the optimal setup for their needs while only having to go +/- a few clicks. The one thing I’ve noticed in particular is that giving the user the ability to adjust high speed rebound can result in them running it too slow so it packs up. Then, they think it rides a bit rough so they open up their compression and in turn it wallows and gets divey. A really skilled rider can usually set up well in one day, especially with a lift in a park where you have multiple runs. So yes, setup is critical but we have really good paper and online resources to help people achieve the right balance.

MTB-MAG : Well, thanks for taking the time to chat Bill, let’s talk tech.

Bill : Alright, let’s pull apart some shocks and we’ll go over some features of the X2 shocks. 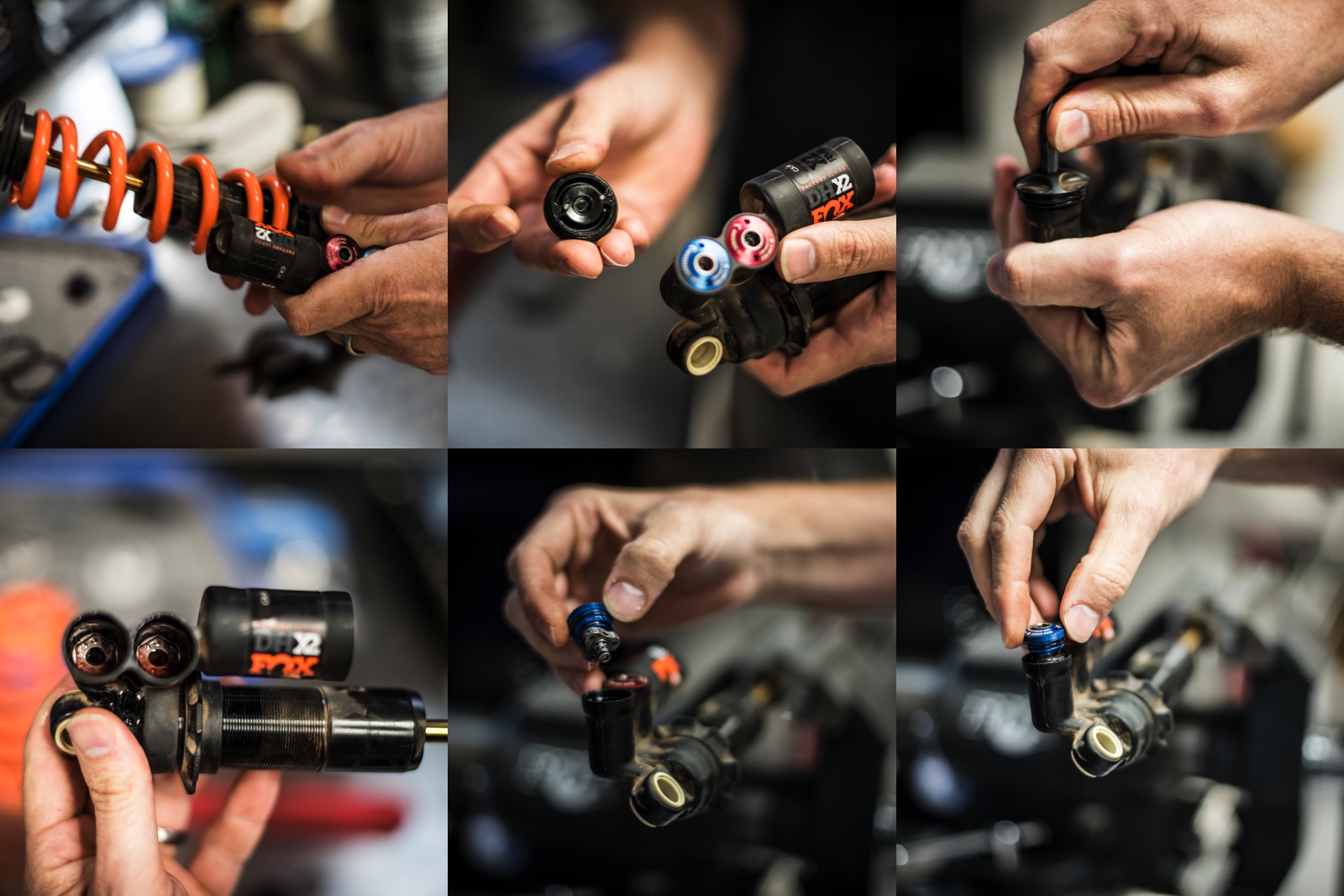 Here is a brief photo by photo rundown showing how simple it is to custom tune a DHX2 rear shock at home. You don’t need a vacuum bleeder, but do not attempt unless you’re a highly competent mechanic with all of the right tools at your disposal. We also unveil a couple of potentially unknown features hidden in the shock itself.

Top Row : Left to right – Remove the spring, then with an allen key, unscrew the end cap on the reservoir to reveal a hidden pin spanner. Using the same allen key that you removed the end cap with, you can remove each individual Rod Valve(blue = compression/red = rebound)

Bottom Row : Right to left – Pull the valve out, and take it apart as necessary. Refer to Fox for shims and tuning guides. Disassemble, reinstall and re-bleed. 125 PSI for all units, no vacuum bleeder required. 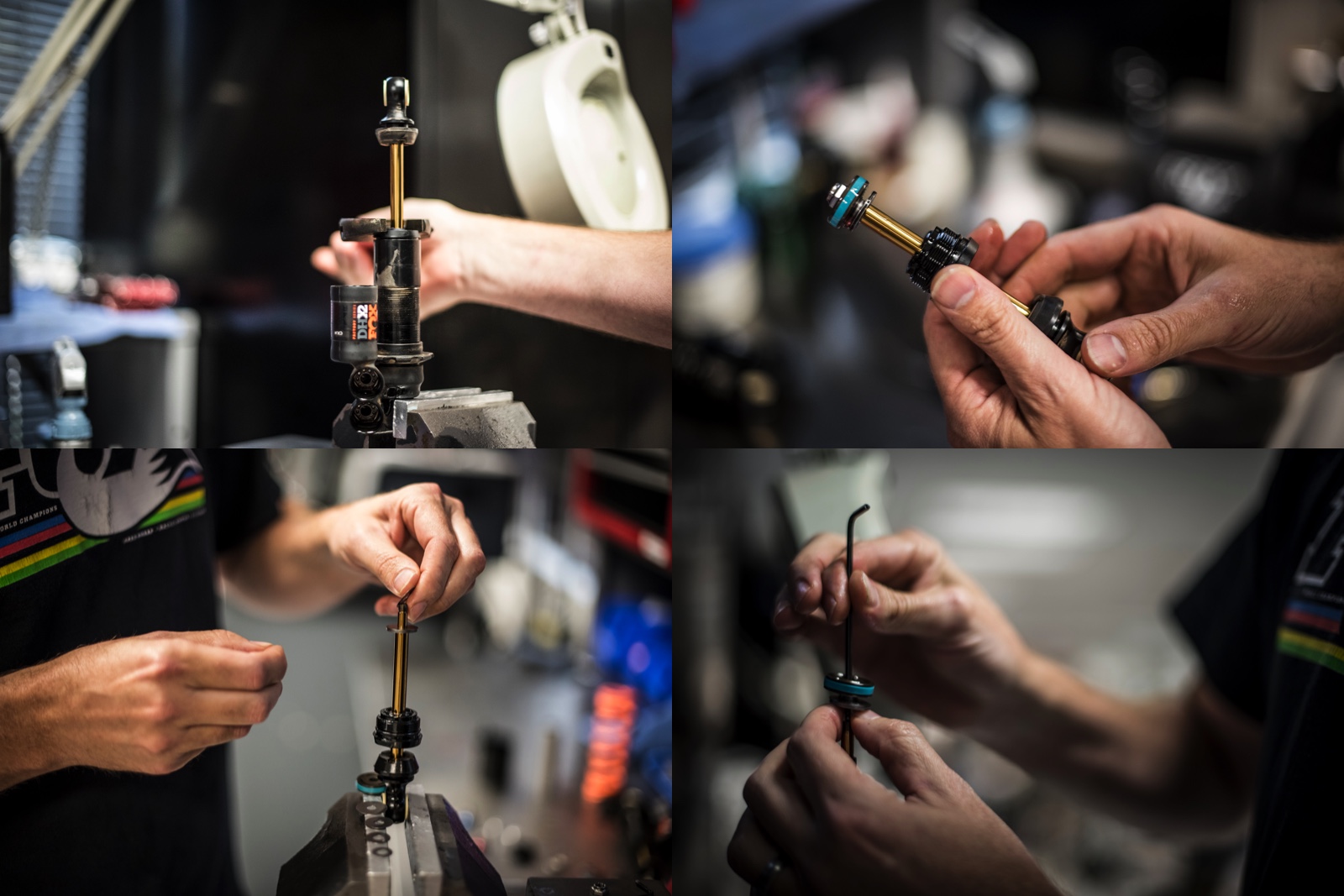 This sequence shows how to disassemble and remove the shaft to expose and re-tune the main piston.

Top Row : Left to right – First, clamp the upper eyelet securely into a vice. Using an adjustable wrench, unthread the shaft nut and pull the shaft and main piston out as a single assembly.

Bottom Row : Right to left – Clamp the lower eyelet in a vice and using a box end wrench loosen the nut that secures the piston. Another really cool sneaky feature is that Fox laid out the shim stack so that it can be simply flipped upside down for a more ideal tune for lighter weight riders. The stock tune is set for mid to heavy weight riders. Anyhow, once you’re done with the tuning – reassemble, re-bleed and set to 125 psi.

Above is a thorough visual explanation of how the new Rod Valve System works.