You may not hear a whole lot about Connor Fearon on a daily basis during the World Cup Race season, but he’s been steadily creeping up and becoming more of a threat on the race scene. The young Australian rider is known for being rather quiet and let’s his riding do the talking.

On a bike, Connor’s style looks like a lethal combination of Chris Kovarik’s aggression mixed with Sam Hill’s all out speed and witty lines. Last year, he showed some brilliance with a few good results, but more importantly, some seriously competitive split times. Right at the end of the year, Connor had a horrific crash at Worlds. We’ve been keeping tabs on him via social media and he seems to be recovering nicely. A couple weeks ago, we reached out to the young pinner to see what’s new and how he’s getting along. 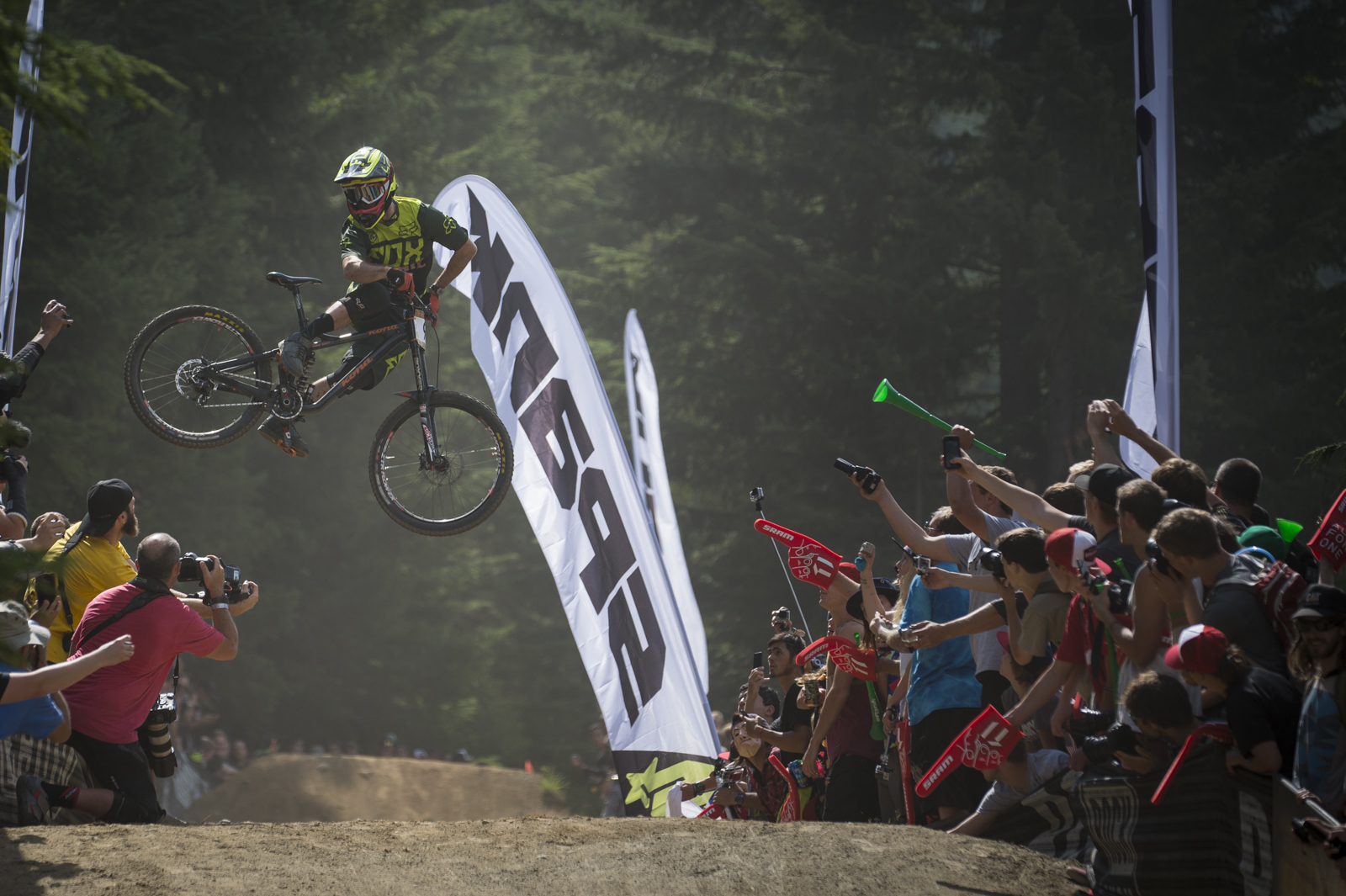 MTB­MAG : Hey Connor, so it’s the off season for world cup…How’s summer treating you in the Southern Hemisphere?

CF : Yes, I actually signed for two more years which will see me through to the end of 2016. 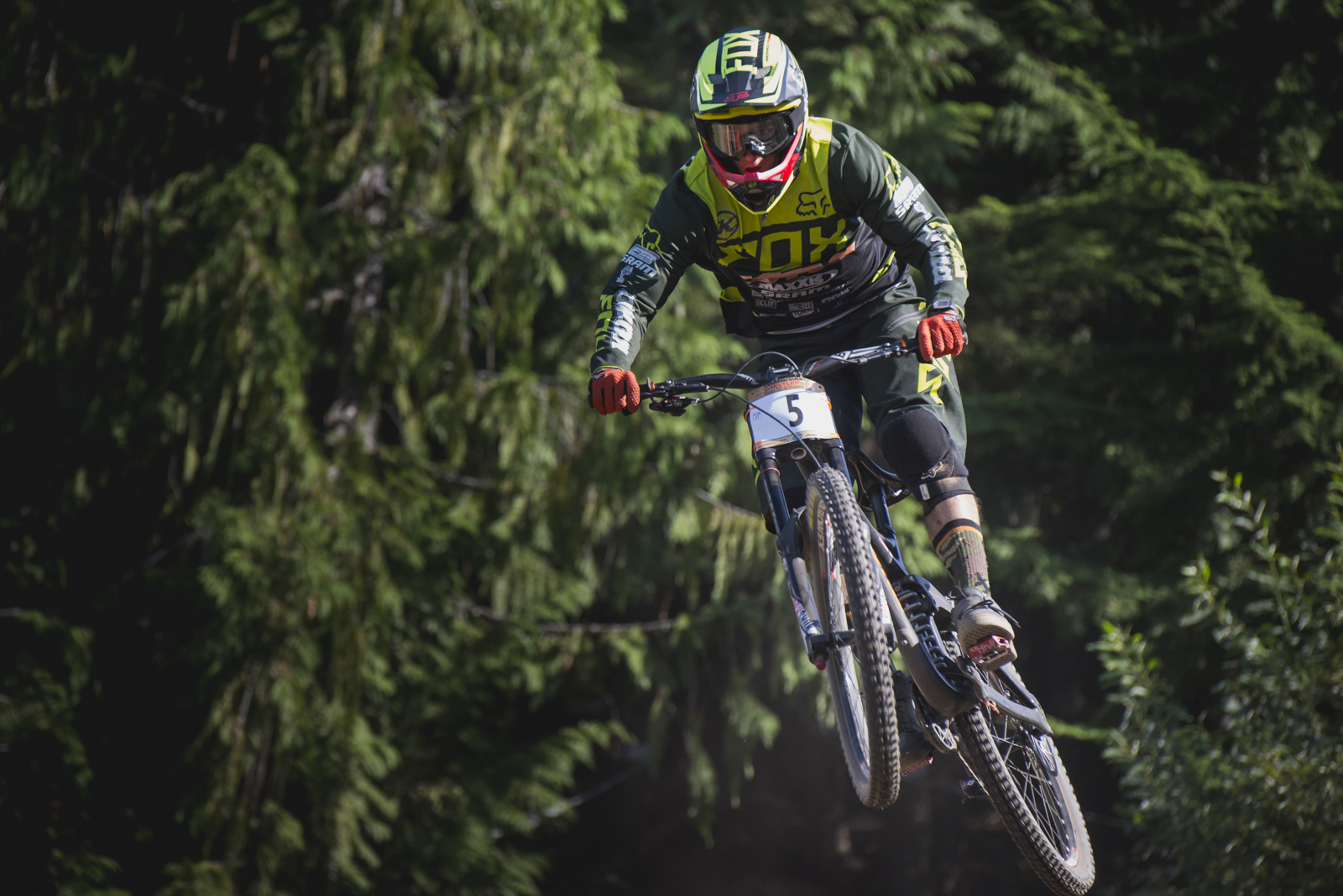 MTB­MAG : They must be treating you pretty well to keep you coming back. We heard some buzz that a few other big teams had their eye on you while your contract was up this year. What made you stick with Kona? The bikes, the program, the people? A bit of everything?

CF : Yeah that’s true, this year I got quite a bit of interest. It definitely gave me something to think about. The big bike companies with massive tents at the world cups don’t appeal to me much. With Kona we only have a small pit that doesn’t get much attention, which I like. I’m not trying to be a rockstar, as long as I’m in the start gate with a fast bike and have the right support I’m happy. For me, keeping Dupelle as my mechanic was a massive reason and obviously I know the Kona is a really good bike. I thought I will ride the best on Kona so that’s why I signed again.

CF : Yeah I really didn’t mind at the time, I was still doing pretty well. But at the same time, it sucks to train as hard as I do and already have a disadvantage before I leave the start gate. I will definitely be on 650b wheels for 2015! 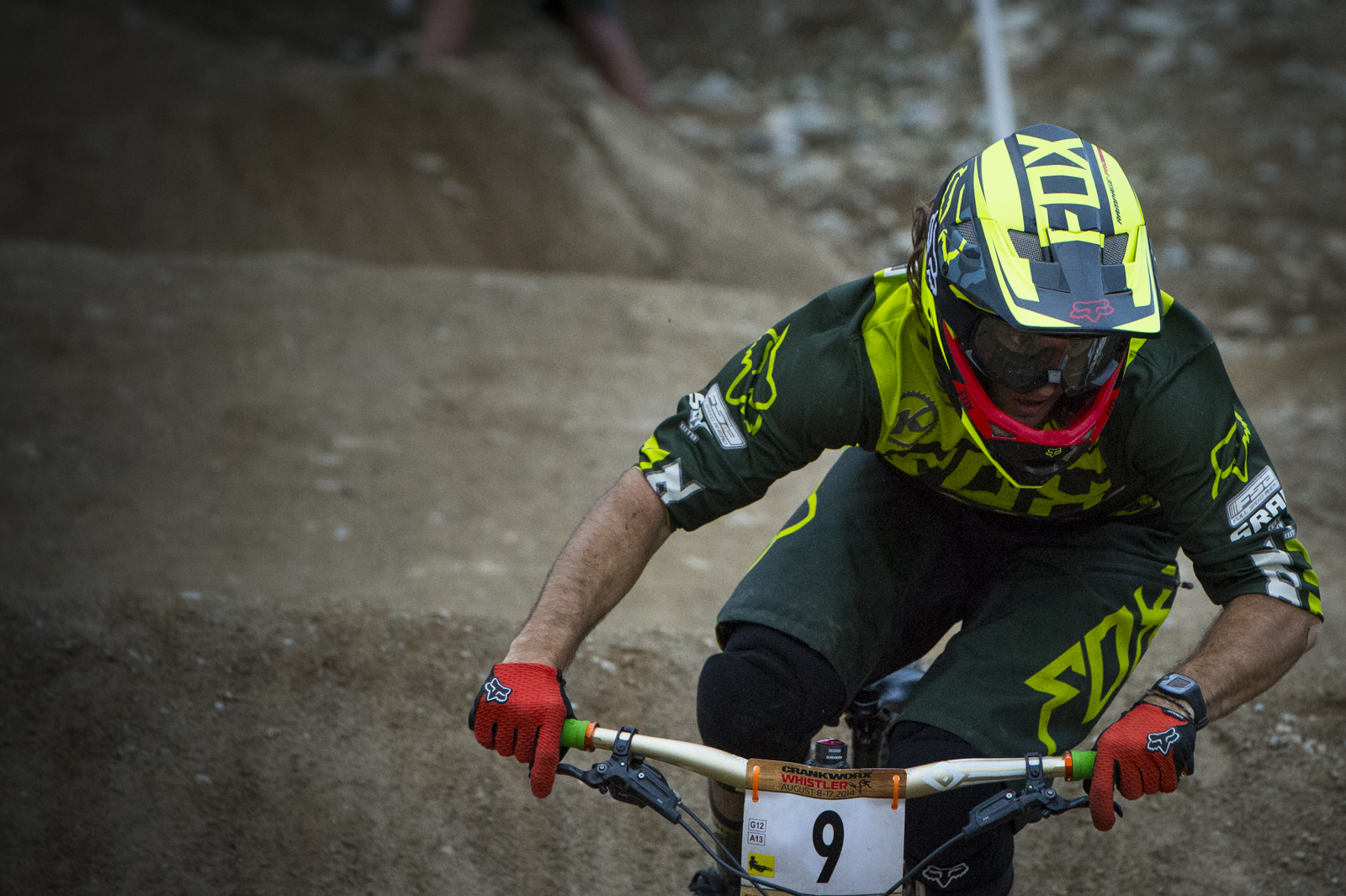 MTB­MAG : You had a nasty injury at World’s but judging by your instagram it seems like you’re healed up and raging onward. By the way, out of all the world cup guys, we’re pretty sure you’ve got the sickest videos on there. Huge fans over here.

CF : Yeah I wasn’t expecting that at World Champs. It was the last day of racing for the whole year and I was set to fly home the next day. That all changed when I woke up in Hospital with a face so swollen I couldn’t see out of my eyes. I had to have surgery to bolt a metal plate into my cheek because it was so broken, and also bend to my nose back. My confidence riding downhill is still low but I’ll get it back as I ride more DH. I also like editing the videos on my phone, it makes riding a little more interesting. I follow a few Moto and downhill pro’s who’s Instagram is super boring, so I like to make mine interesting for my followers!

MTB­MAG : So we got to shoot you at Crankworx a bit. You were everywhere. Whip off’s, DS, A-­Line, etc. You do well there…especially in DS. Do you wish that format would come back?

CF : I love riding in whistler all together and I race everything I can at Crankworx because it’s just a lot of fun. My favorite part of riding is smashing turns so Dual Slalom is definitely great, and I enjoy the head to head racing. If slalom came back to world cup racing I would be in it for sure! 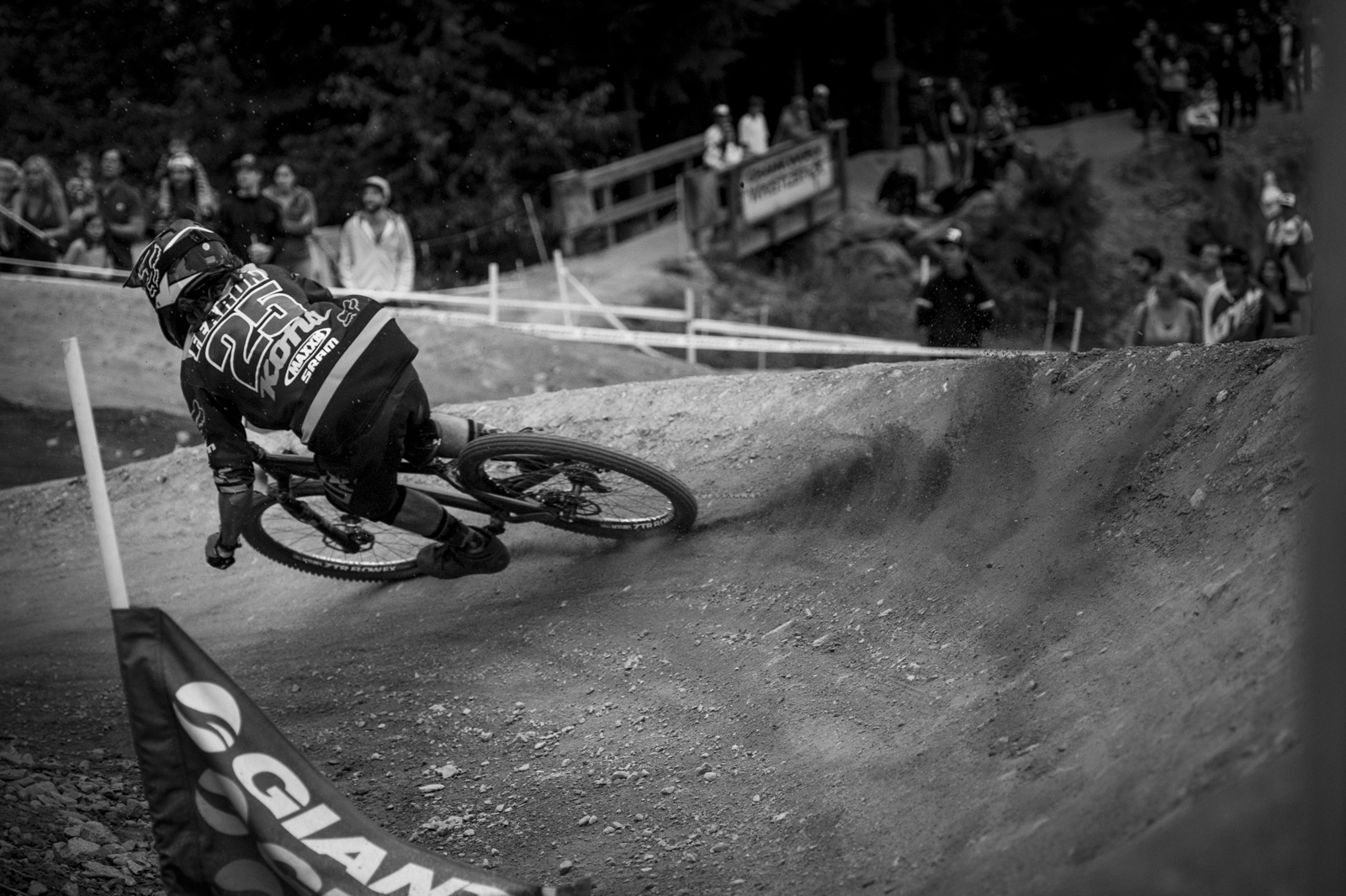 MTB­MAG : Will we be seeing you at Crankworx Rotorua?

CF : I’ll be at Queenstown for a couple weeks in February and will come back again for Crankworx in Rotorua. I’ve never ridden in NZ, so looking forward to it.

MTB­MAG : We noticed you’ve done some Enduro races down under. Do you think you’ll compete in any major rounds or EWS stops for shits and giggles?

CF : Yeah I’ve raced a couple of the Enduro rounds at home and it’s been fun and good test of fitness. I probably won’t race any of the EWS unless they align with the world cups and where I am at the time. It’s just not downhill racing!

MTB­MAG : What do you think about Enduro? Pretty good training for DH, right? Maybe if they added in some more jumps it’d be even better?

CF : I love any form of mountain biking. It definitely helps with downhill, if you can go hard for the longer enduro races then a downhill race should become easy. I think they should have a separate category which allows you to get a shuttle or chairlift to the top of the stages then I can see myself racing more enduros! 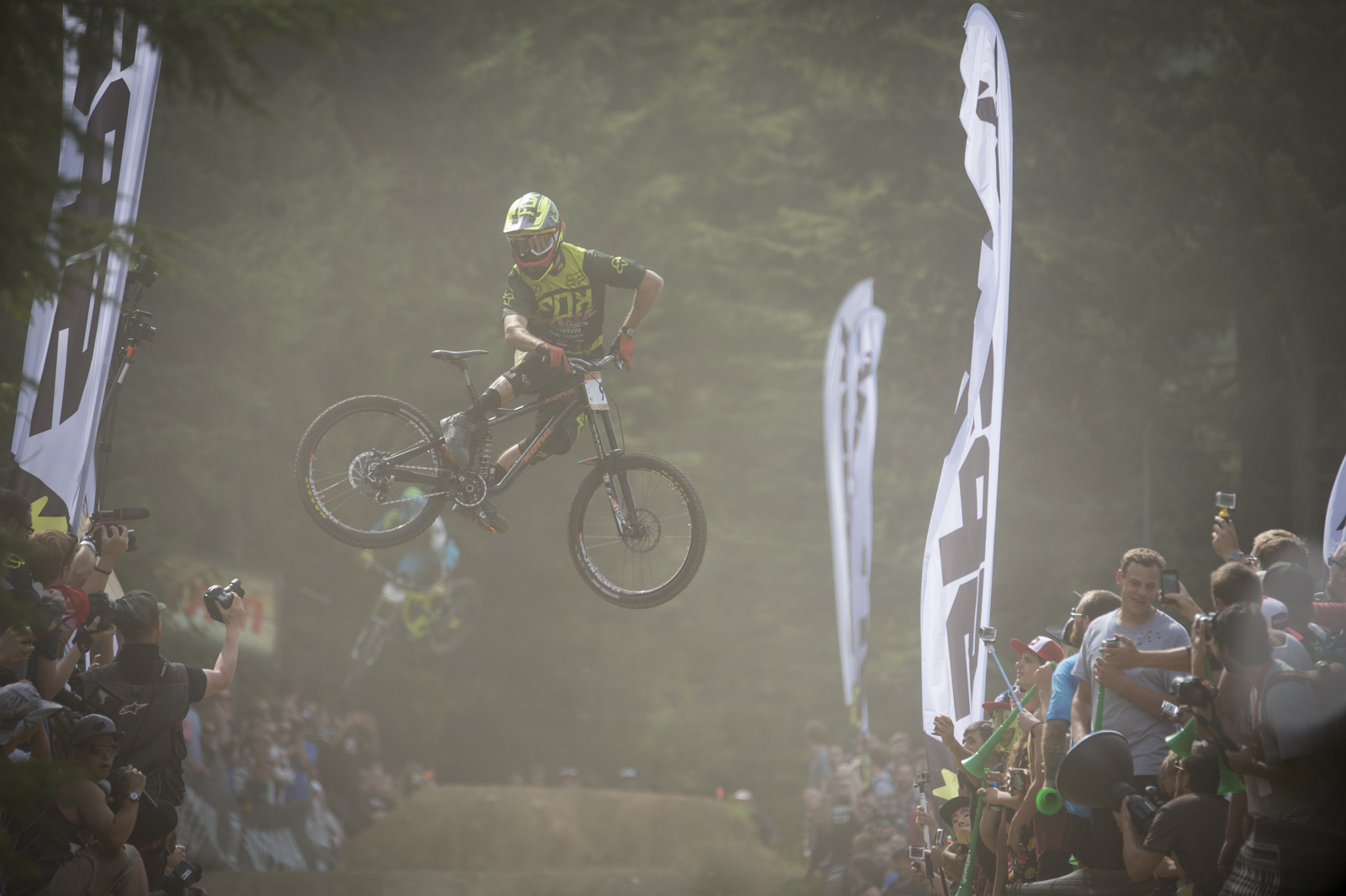 MTB­MAG : We noticed that you love to dirt jump. Is there anything else that keeps you fresh? Surfing, Moto, Skate??

CF : I dirt jump and ride the skatepark almost everyday. It’s a lot easier to roll down to the jumps than it is to organize downhill shuttles or ride uphill for a couple hours on the cross country bike. I also surf a couple times a week and ride my Motocross bike when I can. I make a trip to the snow every year to snowboard but it’s hard because I’m never home for Winter. I like to skate to but I’ve had to stop it because I have a bad back… I basically have a passion for every action sport and wish I was pro at all of them.

MTB­MAG : A couple years back you stayed on the east coast of Canada and trained at Bromont a bit. We loved the edits you did there. Any plans for some travel prior to this upcoming season, or do you plan to just ride a ton in Australia?

CF : I get to stay in Bromont for a few weeks every year either before or after the north American world cups. My Mechanic Dupelle lives there and it’s a good base because there is lots of downhill and cross country. I will probably be there for a few weeks after the first world cup as there is 2
months gap and it’s easier to ride downhill in Bromont than at home. You can also be sure there will be another Bromont video from me and Vincent Allard that will be better than the last two! 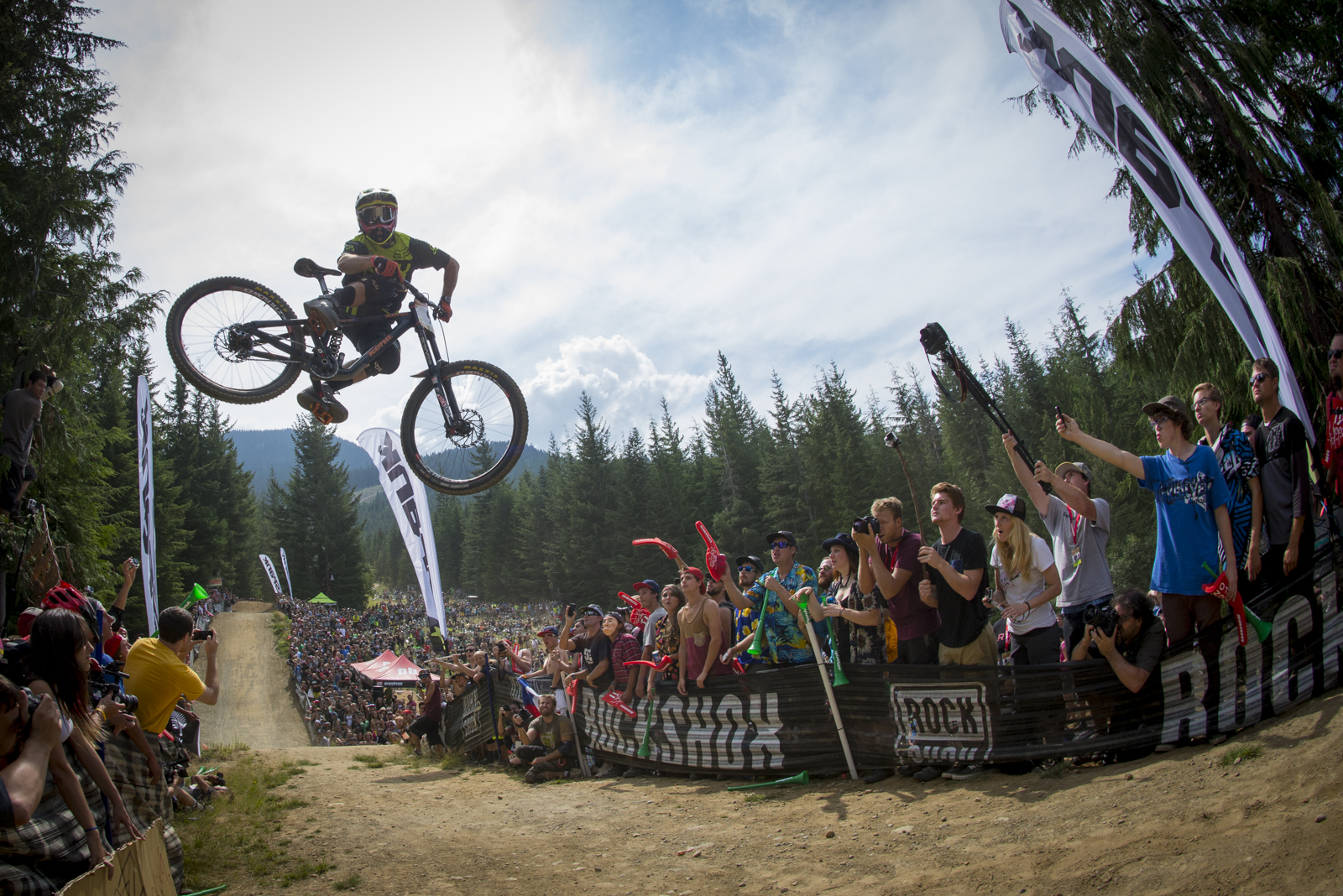 MTB­MAG : Correct us if we’re wrong, but Andrew Crimmins signed again with Kona
as well. You guys seem to train well together and he’s been showing signs of brilliance. Are there any other up and coming Junior Aussie guys that we should have our eye on?

CF : Andrew signed again with Kona which Is good. We get along really well and motivate each other. Once he gets a bit more world cup experience, he will be killing it. Apart from Andrew, Jackson Frew is a even younger rider who is looking really fast.

MTB­MAG : So growing up in Australia we assume you were heavily influenced by some legends like Hill, Kovarik and Rennie. Did any of those guys take you under their wing at an early age? How did that affect your riding?

CF : When I first started racing when I was 11 I looked up to Sam Hill, Chris Kovarik, Nathan Rennie, Jared Graves and Bryn Atkinson. I didn’t even know of any other world cup riders at the time I just knew the Australian guys. None of them lived in South Australia though. Troy Brosnan lives only 15 minutes away from me and riding and racing against him for the last decade has pushed me the most as a racer. 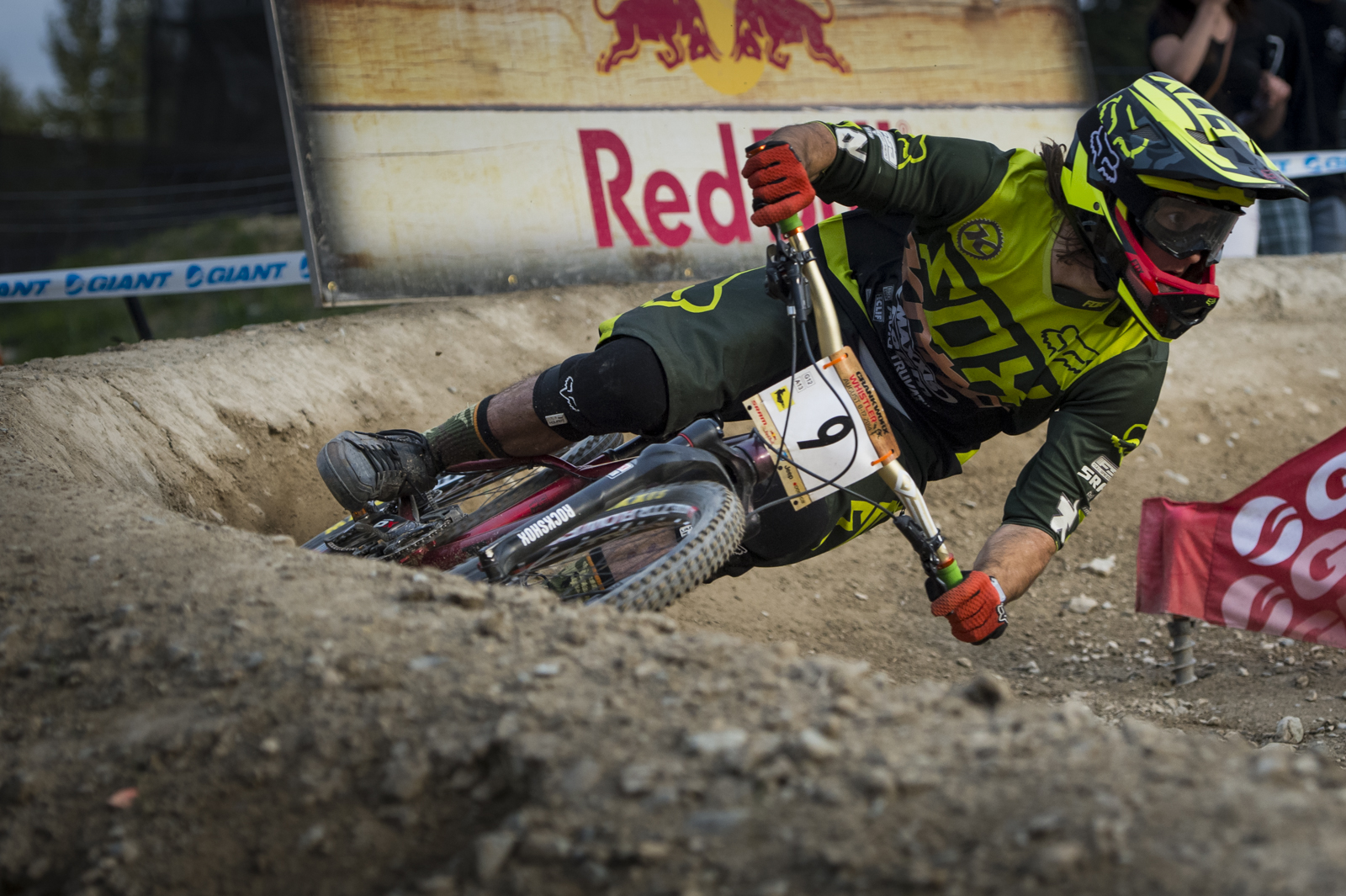 MTB­MAG : So obviously Ratboy is on a hot streak at the moment. Who else do you think will be looking strong going into this next year?

CF : I think Sam Hill is going to be hard to beat. Same with Troy Brosnan after carrying the number 1 plate for a few races I’m sure he will want to win his first championship. George Brannigan, Brook Mcdonald and Sam Blenkinsop will be hard to beat as well. 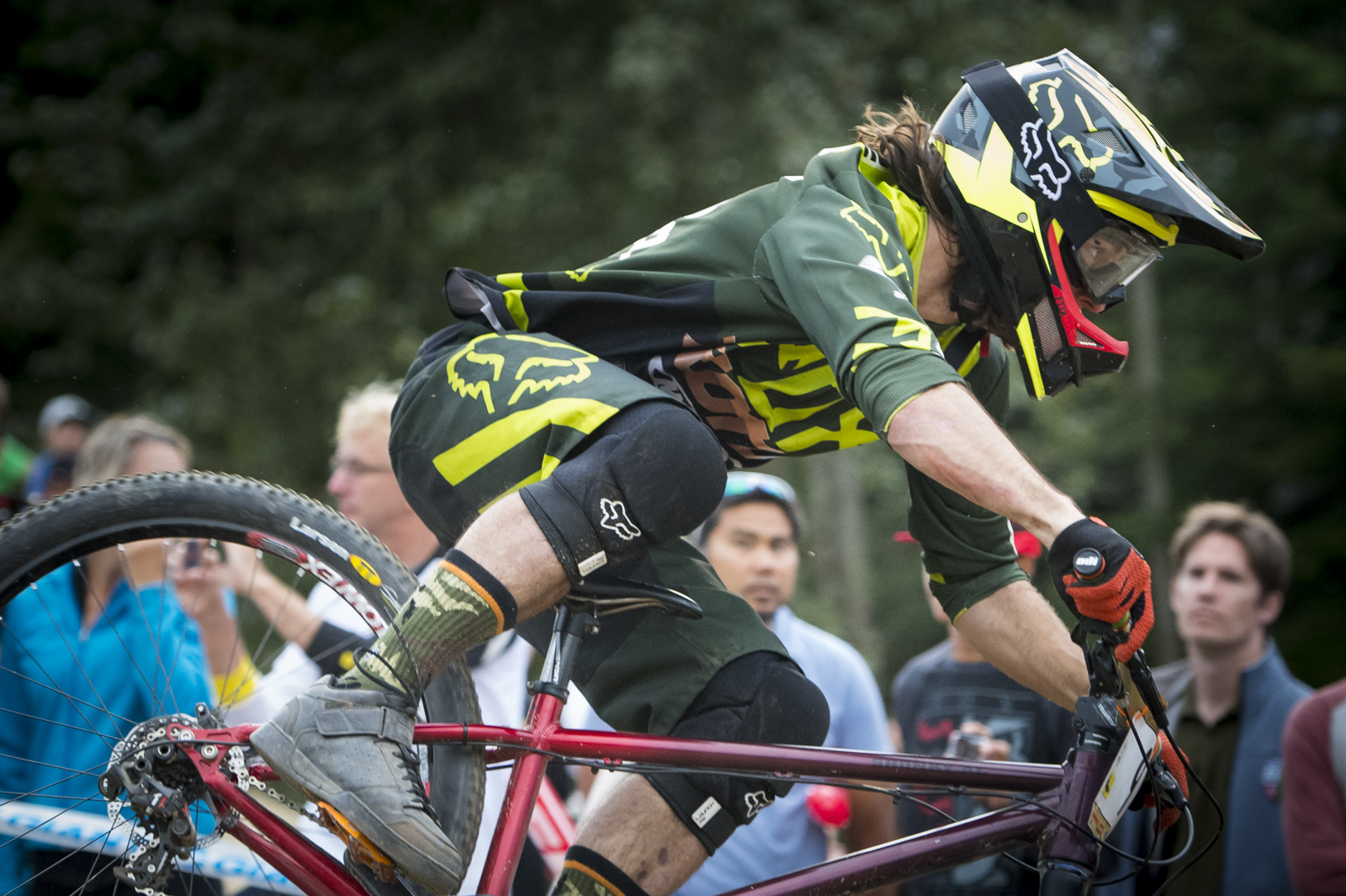 MTB­MAG : So getting back to you. Last year was strong for you until the very end…You cracked the top 20 at a few races and got into 9th at Leogang. At a lot of races you had some really impressive split times, but here and there it seemed like you had a hard time putting a complete run together. You’re still quite young….As you get older and start to find your consistency we’re confident that you could take that top step. A lot of racers seem to have pretty loose programs at your age where they just shred a lot to stay in shape. These days DH seems to be so competitive that you almost need a serious regimen. Are you working on any specific program going into 2015 season?

CF : I had some good results in 2014 but in hindsight I was bitterly disappointed with the whole season. In Cairns I was really hoping for a podium but crashed really hard. Same in Leogang – I knew I had the speed and the last split I was 5th but then blew off the second to last turn and went off the track. Mont St Anne was a complete write off, I was coming 16th overall and got an infection in my elbow so couldn’t even race. Riding has always just been about fun for me, I would love riding and racing just as much if I was placing mid pack in sport category at the state races. But obviously I want to do the best I can so I’ve stepped up my training for the 2015 season. Right now I know I’m fitter and stronger than I ever have been, I have a really good trainer and program and I can’t wait to race again.

MTB­MAG : Well, we really appreciate you taking the time to chat with us. We’re pulling for you here, and would love to see you on the top step, or at least the podium. Best of luck Connor!

CF : Thanks! Making the world cup podium is my dream so you can be sure I’m working hard for it. 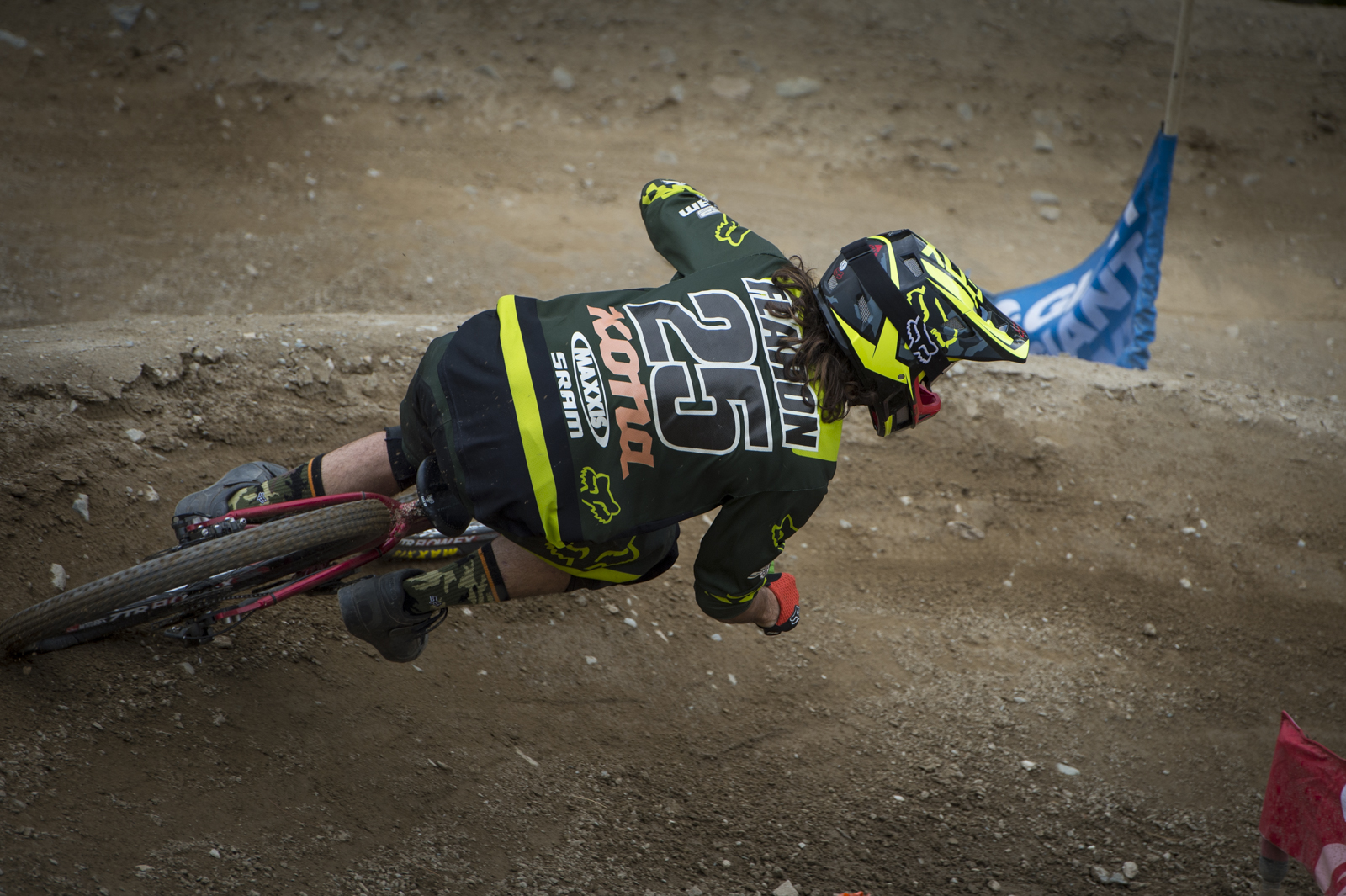