These days, nearly every single mountain bike has a suspension fork installed on it.  With such a huge market there are many people who are not too fussed with what happens on the front of their bike, as long as it works. For the more discerning crowd there are companies such as Formula who make aftermarket forks that can be set up anyway the rider likes and while providing measurable improvement in performance.

During our recent visit to Formula we spent time with Luca Rossi who went through some of the key features of their forks and how they developed their 33 and 35 suspension forks. Mtb-Mag: Whats the first thing you did with the fork development?

Luca: We started out with the aim of maintaining rigidity and light weight within the structure. Regarding the hydraulic performance, the aim was to make something which could be swapped out quickly, but at the same time was highly adjustable. 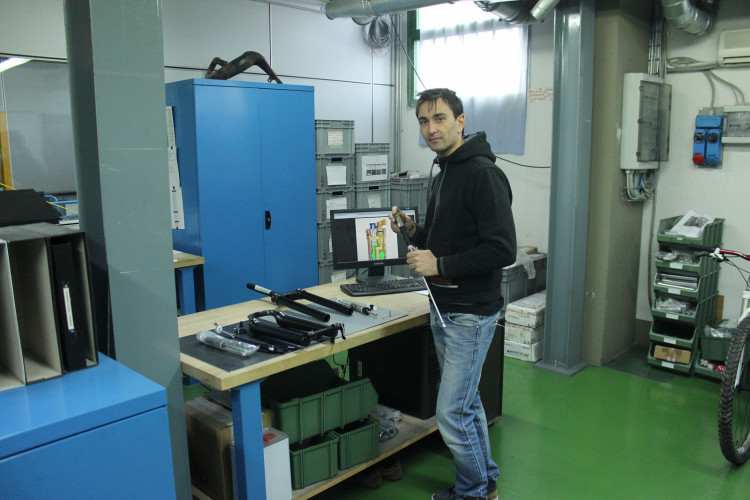 Luca shows us around the testing facility. 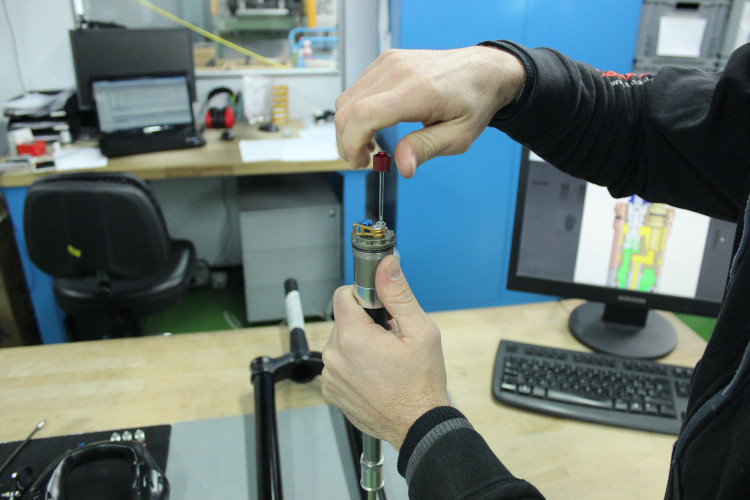 Mtb-Mag:  Is it hard to create a fork that is highly adjustable with all the demands of the modern rider who wants also simplicity in maintenance after use in adverse conditions?

Luca: Once we had created the first cartridge we spent 6 months developing it further, trying to break it, then we’d modify it then re-test it, then break it again. Each time pushing the limits of the fork. We ended up changing everything from our first design, including the bladder rubber density, the system for retaining the slide rod, the lockout force control. Everything, based on our tests we refined everything.  Then we added the feature for controlling the soft, medium, and hard compression blow out valves. We ended up with a high performance fork that remains stable over time. 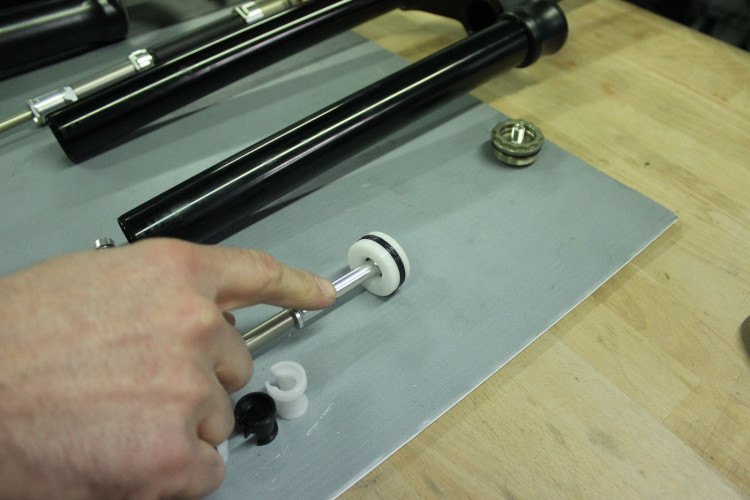 One of the key designs Formula have used is a floating piston head.

Mtb-Mag: You have floating pistons, how did you arrive at that system?

Luca: This came from our own in-house testing where we would laterally load the fork with our test machine. So during our durability tests we also were able to measure how the binding forces on the fork could be reduced.

The extra weight that represents side loads, puts the internal pistons under pressure to slide at an awkward angle. But the flexible piston head means that the extra weight is not transferred into a binding force on the piston head. Compared to other forks on the market we created a fork that moves more smoothly, while remaining light weight.

Mtb-Mag: How much more smoothly did it move, with this system?

Luca: We found that we had an improvement when all our design features we combined under max load of a 30-40 percent reduction in friction binding forces on the piston, therefore improving its movement significantly. We spent a lot of time looking at tolerances and alignment as well within our research. Everything adds together to create this smooth movement that we were looking for. 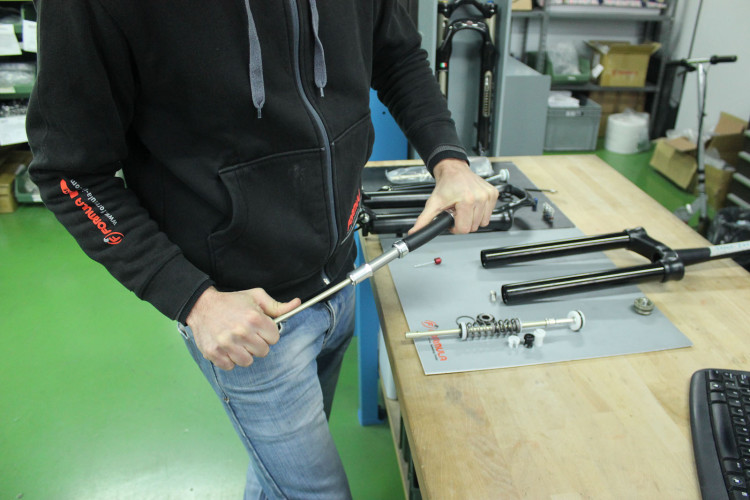 Sideways forces like this (being demonstrated to an extreme) are what can slow down the movement of a fork in its movement. 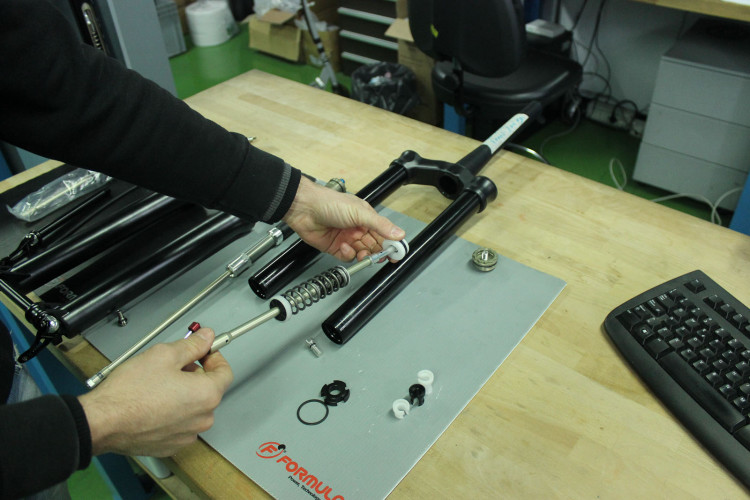 The piston head is able to move inside the leg, producing less sideways friction and a smoother stroke. 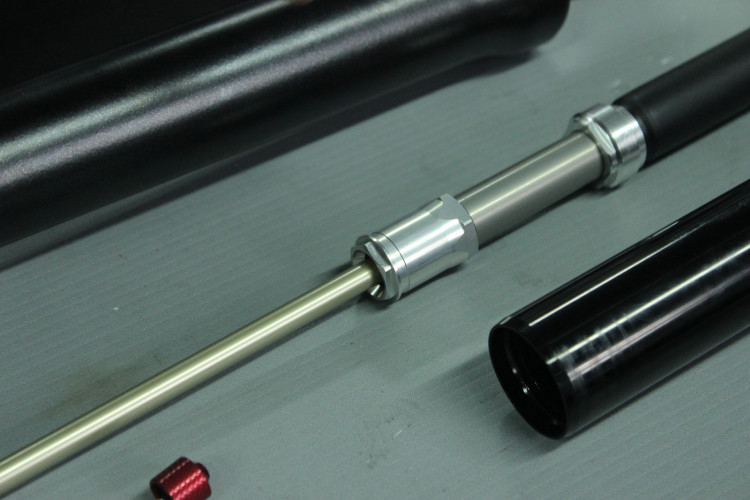 This is a weak point on many fork designs and is where Formula have spent time making sure that the cartridge stays intact and sealed.

Mtb-Mag: How many hours did you spend on the cartridge development?

Luca: Well that’s hard to gauge in time, but for example the cartridge has to undergo tests like 10,000 hits, with everything closed. This tests durability, our objective is to make sure that this work bench test if met can be translated into a solid trail performance. which we set with our pro riders.

The main things that break tend to be the rubber seals, in this case we managed to never break the seals. Our work was done well. 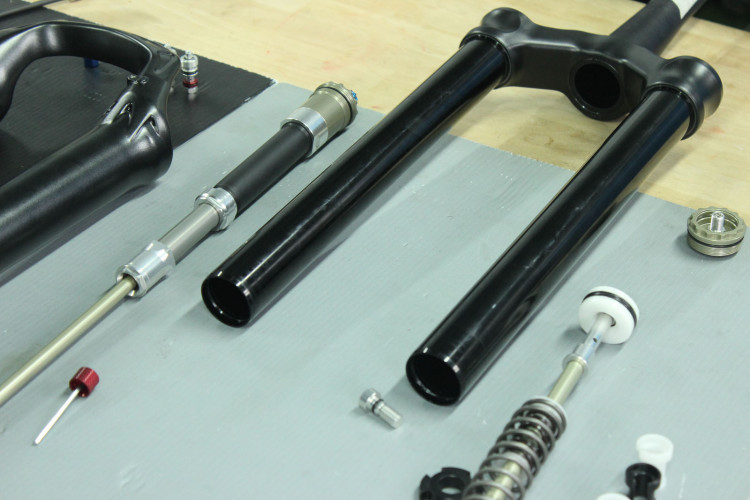 An exploded view of the fork parts. A close up of the piston head. 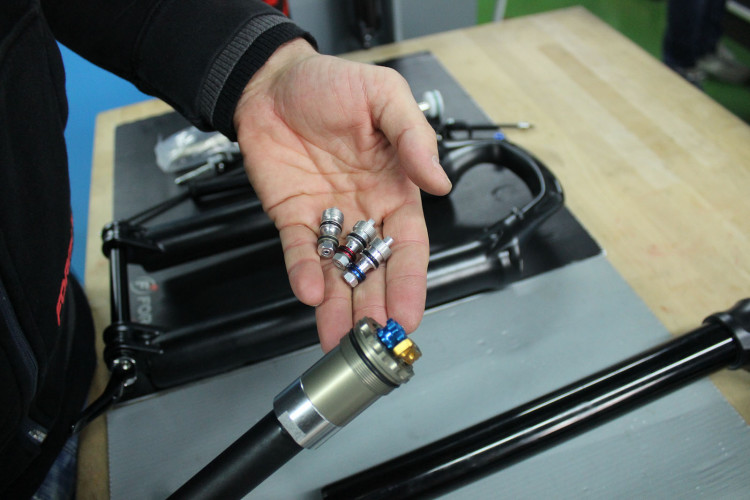 Mtb-Mag: To have tight tolerances, how do you balance the cost at arriving at said tolerances while delivering an accessibly priced product?

Luca: This is one of our secrets! There is a way to arrive at what we wanted within the way we put together the forks. This is our commercial knowledge. We have worked on this a lot since our first prototypes… 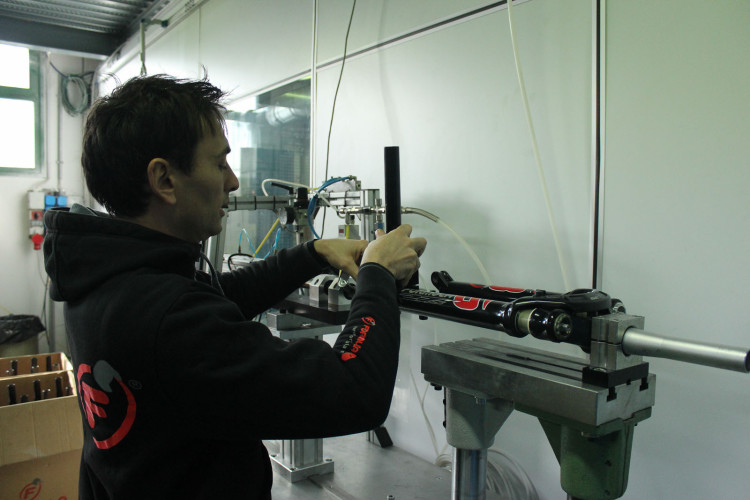 Luca loads up the fork in the test rig showing one of the tests they carry out when trying to measure sideways forces.

Mtb-Mag: How many prototypes are on your development cycle?

Luca: We made probably around one final product. We did not allow any errors out of our testing house, the forks were worked on until they were a finished product. We did not have prototypes in the field of different variations, we stayed on one product got that right and released that.

Mtb-Mag: The future of forks is what?

Luca: Well, we are actually working on an air shock, and focusing on our 35 fork performance constantly.

Luca: We are having some ideas, can’t say anything more than that.

Luca: For now, no. It’s inevitable in the future, but nothing right now.

Mtb-Mag: How important is the everyday riders feedback into your product development?

Luca: Our forks with their standard settings are being used by Pro riders, normal riders, everyone. We have a fork system that works well for everyone. However if you want you can change all the different settings on the fork and set it exactly how you want.

Mtb-Mag: Compared to the competition what advantages does the 35 have?

Luca: We can vary so much so easily, progression can be changed via the air spring chamber with small changes in oil levels. Compression can be set to be within three broad ranges depending on the kit you use. Also the travel can be varied on each version of the fork. Overall we have created a fork that can be set with Expert settings or left as is. The only proviso is that a normal rider would need the help of a bike shop to help explain in which direction would be the best to go according to their riding ability. One of the victims of testing, ready to be pushed to the limit.

#weridecb contest: and the winners are..