At a recent product launch we had the pleasure of meeting Joe Buckley. Fondly known as “Buck”, he is the Product Manager for full suspension mountain bikes at Specialized. We sat down to have a chat with him, find out how he came into the industry and asked him about his days as a World Cup DH mechanic back in the 1990’s. 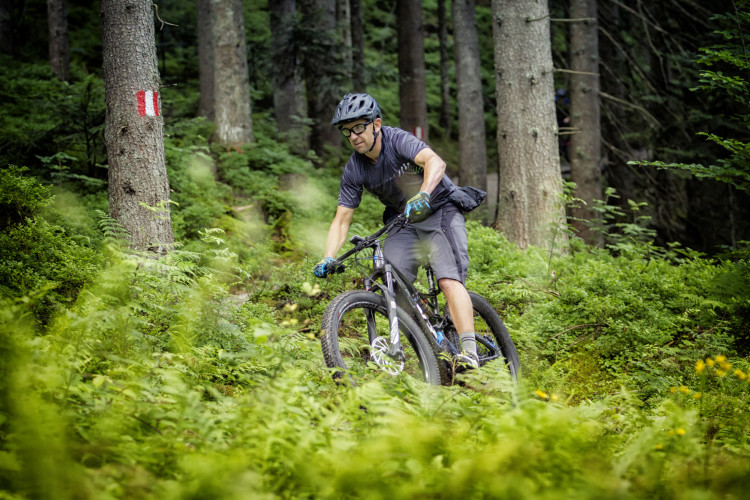 Buck clearly enjoys riding and is pretty damn fast. He knows his products and is incredibly in tune with what consumers want from their bikes. 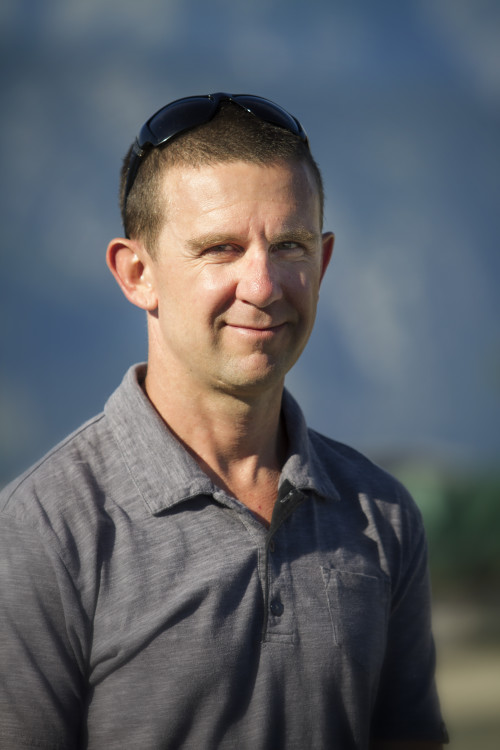 The clean cut Buck, almost 20 years since his time on the road as a race mechanic.

How did you get to this job now, I have heard it was an interesting Journey?

I got lucky, I was in the right place at the right time…I grew up racing bikes, riding bikes and working in a bike shop. Then I got a job by chance working for the Baracuda team in 1995. It was great, but then the team folded at the end of the year and I didn’t have another mechanic job lined up. A mutual friend put me in touch with Shaun Palmer as that was when he was starting out. I went down to southern California, hung out with him for a day he said “Ok seems like a good deal, I’m going to Europe to do the first few world cups, if I do well I will come back and hire you.”

He did well, then I worked for him throughout the 1996 season, where he made a deal with Specialized at the end of the year, and he bought me with him.

So you were there when he became known… what was it like being there in that first explosive year?

I was 22 very young and from the middle of no-where, I hadn’t had a lot of outside experiences, to be working with a star in the industry was totally crazy. Lot’s of fun parties, jokes going on, good times, there was no pressure as it was his program, he was footing most of the bill, Jeff Steber(Intense) was helping him out with bikes and stuff. A good time for sure, totally couldn’t do it at this age…but it was a lot of fun.

What type of wrenching were you doing? Was it different back then as the bikes were less developed?

Bikes have changed a lot, though very much the same, keeping the bikes clean, making sure the parts are fresh on them, being able to trouble shoot when things are not working correctly. With more technical things, like suspension servicing there were sponsors supporting on sight, much like today. In general terms not too much different.

Were the trails and races easier going on the bikes back then?

When I was with Baracuda the races were domestic and mostly on fire roads so the bikes didn’t take a ton of abuse, the technology wasn’t there, the bikes were not soaking up everything they soak up today. Then I went to Europe with Palmer. At Nevegal which is an infamous course for bikes, DH bikes with the same amount of travel as a trail bike today got pretty thrashed for sure. We went through tyres, rims, & drive-train stuff got beaten up quite a bit.

Is being an expert wheel builder one of the skills required to wrench on the World Cup circuit?

An expert wheel builder is probably a different definition for someone who works on the World Cup. Downhill mechanics have to do it fast, maybe in about 15 minutes. But you are not building them to last a lifetime, the rims get destroyed before the build gives up. You have to make sure the wheels don’t vibrate loose that’s the main thing.

So, how was it in Cairns in 1996 in the infamous race against Nicolas Vouilloz where he lost by a tiny margin?

I would say it was more laid back then, people had their game face on when it came to race day, but people weren’t training, Palmer wasn’t training. Nowadays, things are pretty serious, riders train and prepare. That was a time when there was big outside sponsors, money in it. There was a lot of great parties and mischief going on that made it super fun.

What were you expected to do as Palmer’s mechanic?

I was always trying to make sure everything was prepared the day before. The race in Cairns was interesting as he was due to have the custom painted frame from Troy Lee, but it got stuck in customs and it didn’t show up until after the last practice before the race. I had to build it up super fast, that was a serious panic for me. You had to take everything off and put it all on the new frame. Luckily for me it worked out ok. He wasn’t happy with his result though. Race days were about just cleaning, basic prep and go to the top of the mountain with him his, trainer and training bike.  Hang out with him, then wait for the results.

Gwin’s Chain breaking was pretty random, how responsible as a mechanic do you feel when things like that happen?

No matter what any mechanical issue is, If something went wrong back in the day, I would ask myself the question: Could I have done anything better? Gwin is different to how Palmer was if things didn’t go his way. Luckily he never had a big obvious mechanical. He had a brake go out on him once and he seized his chain when he crushed a couple of chain devices, nothing like a stem being loose, etc. though…

You took all that experience and are now head of full suspension mountain bikes, how much of what went on then helped to create your path?

I started as a developer to to get where I am now. I was just working on a downhill bike back then, where a product manager is working on a whole range of bikes and getting them to market. You need to have huge range of knowledge. I had a lot of learning to do. I am part of a team that’s not just me, they are awesome to work with and we have a super good time, it’s not as crazy as back then.

Give us one crazy story from back then…

So, the first weekend I worked for Palmer, he called and said, “Hey can you drive the box van up to Mont St. Anne, for the World Cup?” He didn’t give me much notice but I was like ok, here we go. It was Friday, the race started the following Tuesday, he gives me a wad of cash and says I will meet you there on Monday or Tuesday. I left Los Angeles at 20:00 Friday, driving across the country. I ended up running into Stikman at a truck-stop somewhere in Arizona, so we rallied along out there together. We got there in the middle of the night on Monday night, Palmer showed up with Randy Lawrence on Tuesday. During the practice everything seemed to be going well. He gets to the race day, gets in the gate, takes off and forgets to put his goggles on. He was super pissed about the race result.

Next day we pack up and drive to Mount Snow. Him and Randy are in the rental car, we were following him with the box van. Right after the border we stopped to get gas. Some guy is thinking Palmer is looking at his lady. He tries to confront Palmer. Palmer is saying I don’t want anything to do with this, we all get back in the cars and take off. This guy though proceeds to follow us for well over an hour on the freeway, yelling out the window, pointing at him, etc.

Finally we get to Burlington, where we have to turn in the rental car, the guy follows us. Palmer doesn’t want a confrontation so he pulls into a parking lot before, we all get out of the car. The guy in the car gets out of the car, with his girlfriend and her friend still in the back. The guy is coming on like…”@£$%”… saying he just wants Palmer. Palmer is like, “I don’t want any trouble…” He was being really cool about it, which was surprising. The guy steps up to Palmer and pushes him hard in the chest, Palmer stumbles backwards a few steps, the guy keeps going at him, goes to push him again, and Palmer swings back at him. The guy was out cold before he had fallen two inches backwards. The girls get out of the car screaming, as the dude is laying on the ground in front of the rental car. I’m freaking out now as I have never seen anything like this, Palmer picks him up by the belt buckle and shirt puts him in the grass, as he was in front of the car, so he could drive off. The dude from the gas station comes out and shouts what’s going on? Palmer tells him this guy wanted to start a fight.

We leave, drop the rental car off and go to Mount Snow. This was all in the first week I was working with him. There was no way I was going to leave a stem loose or anything after that. Pretty good first impression.

You still watch downhill racing now and get excited about it like back then?

I don’t have a vested interest like back then, but I will get up early and watch it, Gwin’s on the team and has been doing really well. It’s awesome to watch those guys.

Thanks for your stories…and pumping up my bike tyres on the test. 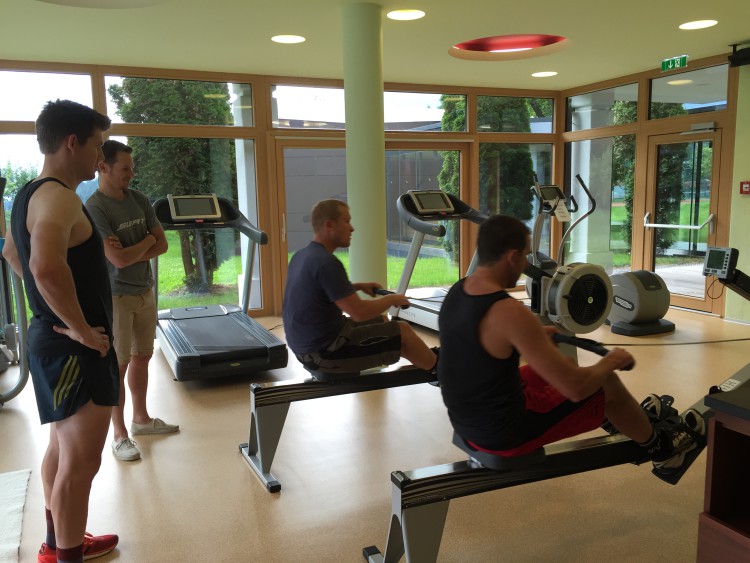 Buck and our correspondent race each other on the rowing machine, Buck wins by 0.4 seconds over 500 metres.