Johannes Fischbach and Eleonora Farina officially are 2015’s Champions of the iXS European Downhill Cup. The last race of the season invited 300 riders from 26 different countries to Leogang/Austria.

Since 2008 the iXS Cup pays a visit to Leogang at least once a year. It has been one of the EDC’s venues right from the start and played host to some of the biggest events of the Downhill scene. This year, the final round of the European series was embedded into the Biketember Festival, next to the Specialized-SRAM Enduro Series, the Scott Junior Trophy and a C1 XCO race. What a weekend filled with mountain bike action – the perfect setting to close the season!

The downhill track received a well-deserved face-lift just in time for the World Cup. Less bike park and more action – and Aaron Gwin made sure that this new course will go down in history already with his incredible chain-less run at the World Cup. Of course, it has been slightly modified for the European Cup and the riders can look forward to another demanding track with lots of fun and action on offer.

Everything was set for the weekend and the only thing that had the riders a little worried was the weather. Whereas Thursday lured the riders outside with sunshine and warm temperatures, the forecast was really bad for the upcoming race days – wind, rain and low temperatures. Against all odds the weather during the training sessions was still at its best, but the mountains always bare some surprises and the weather changes faster around here than you can change your tires.

Saturday’s qualifying was important especially for the Elite Men category. While the other categories fought for their positions in Sunday’s starting order, the Elite Men fought for one of 30 slots in the Super Final.

Often, the podium consists of well-known names and faces, but sometimes new faces occur and surprise with their results. After his great success in the European Championships 20-year-old Jure Zabjek (SLO – Unior Tools Team) set a seeding best time of 3:29.789 minutes and automatically also belonged to Leogang’s odds-on favorites. However, Johannes Fischbach (GER – Ghost RRP) is a real strong competitor and was only slightly behind Zabjek. In the Elite Women category the female European Champion Jana Bartova (CZE – Ghost RRP) also dominated the seeding. While Fischbach already nearly managed to seal his title in the overall rankings, the result of the Elite Women was still far from clear and would have to be decided in Sunday’s final race.

The weather changed for Sunday and riders have to face with wet conditions in the morning. Fortunately it stopped raining in time for the race and the track even had some time to dry. In the Elite Women category Jana Bartova finished with a best time of 4:15.623 minutes and a clear 5-second gap towards Eleonora Farina (ITA – Mangusta Bike Team) in second place. In the overall standings, however, it is the other way round: Farina took the title of the season, while Bartova follows suit in second place. Carina Cappellari (SUI – Radon Magura Factory) ended up in third place in both competitions, in Leogang, as well as in the overall standings. 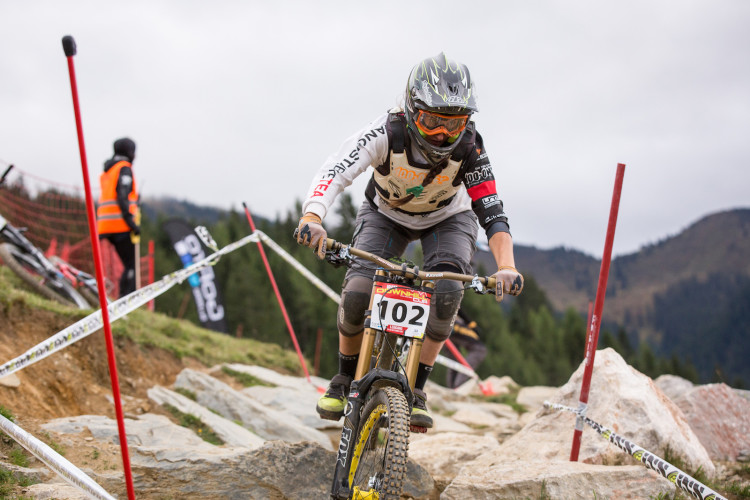 The Elite Men Super Final was even more exciting than usual, as it did not only influence, but decide the result of the 2015 standings! Slawomir Lukasik (POL – NS Bikes FroPro) was the first man down the hill after having some problems in the qualification and he set a time that was 10 seconds faster than Pablo Seewald’s (ARG – Radsport Frei) best time in the Small Final. While Lukasik relaxed in the Red Bull Hot Seat riders like Markus Pekoll (AUT – MS Mondraker), Nick Beer (SUI – Radon Magura Factory) and Wyn Masters (NZL – Team Bulls) tried to beat his time – without success. In the end, it was Bernoit Coulanges (FRA – ROC VTT Oz-En-Oisans) who finished even 4 seconds faster. Now all eyes were on Fischbach and Zabjek. But German Champion Fischbach crossed the finish line as second behind Coulanges, and Zabjek finished second-but-last in the Super Final. Still, this result brought him the third place in the standings, while Lukasik takes the second place. 2015’s official Champion is Johannes Fischbach.
Congratulations!