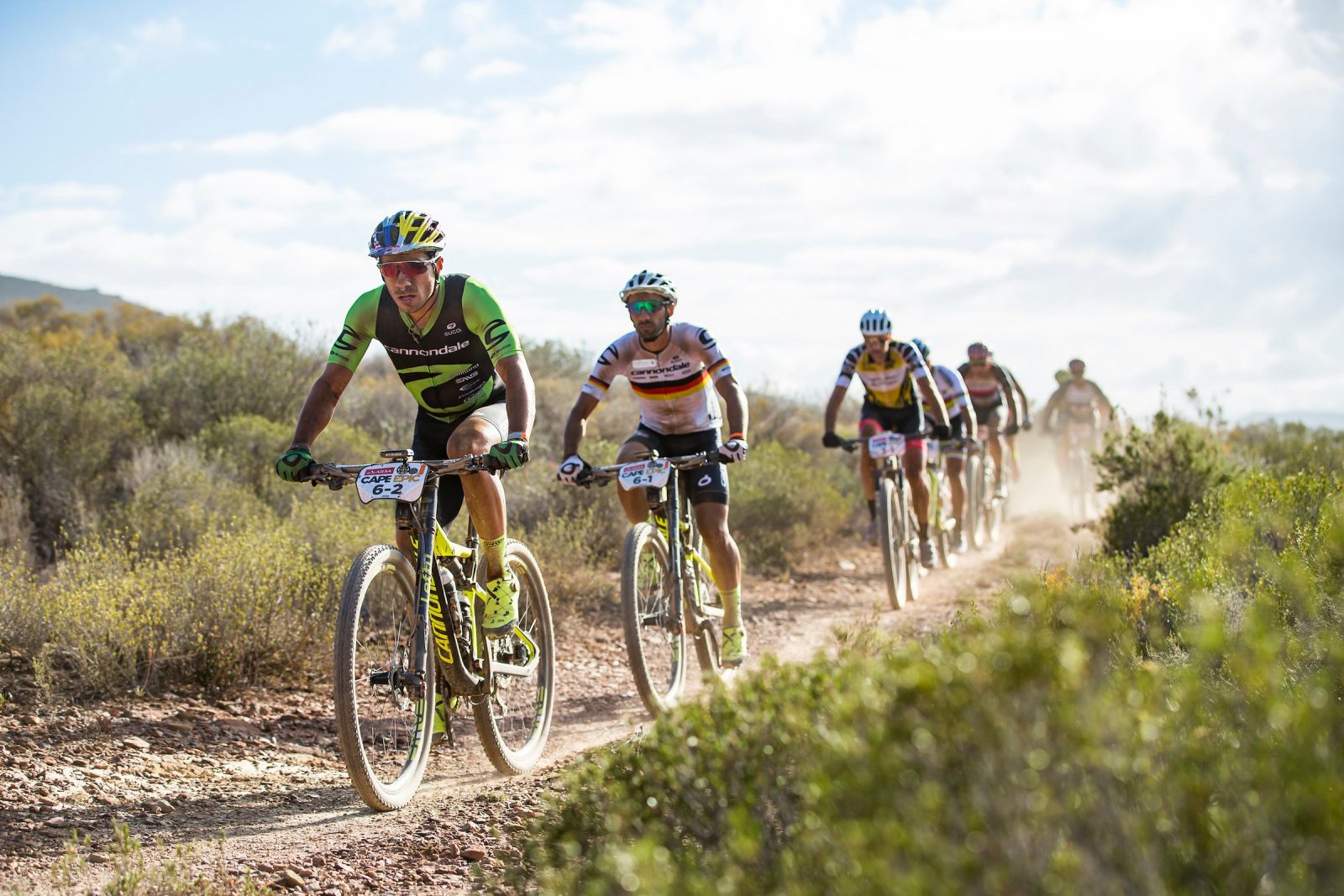 On paper, Stage 1’s 110km/1900m course looked scripted for the marathon riders but as we discovered yesterday the Untamed African MTB Race is filled with surprises – and that’s exactly how the day played out. The racing set off at a blistering pace that was described as “dangerous” and “intense” by Karl Platt who struggled in early parts of the stage.

Cross-country specialists Manuel Fumic and Henrique Avancini (Cannondale Factory Racing) entered the first water point in the lead followed closely by Alban Lakata and Kristian Hynek (Canyon Topeak) and Rohrbach and Geismayr (Centurion Vaude). Despite the efforts of the yellow jersey wearers the Cannondale boys kept the pace high and consolidated their early lead by attacking down the ‘Skid and bones’ Land Rover Technical Terrain – a dexterous move few were able to match. Investec Songo Specialized’s Jaroslav Kulhavy and Howard Grotts followed in hot pursuit and managed to join Avancini/Fumic at the head of the race.

“Today was such a good day for us. We worked well with the Investec Songo Specialized guys and never went over our limit which is good,” said Avancini.

The cross-country quartet worked together for the remainder of the race and increased their lead to nearly six minutes at one point, much to the disbelief of the chasing team of Trek Selle San Marco 2’s Fabian Rabensteiner and Michele Casagrande who would eventually secure the final step of the podium. “Today was just beautiful. This is my first Absa Cape Epic, exclaimed an animated Casagrande. “This is the first stage and we got a podium – it is like a dream for us.”

As the final 20km loomed the Czech Express assumed his characteristic position on the front of the pace line followed by Fumic, Avancini and Grotts – the latter of whom appeared to be struggling in the final moments. The stage would eventually go to Cannondale Factory Racing who outfoxed Investec Songo Specialized in a sprint finish that handed them both the overall lead and yellow zebra jersey.

“It’s always nice to win a stage,” said Fumic. “And it’s great to be in yellow after a great ride today.”

Among the day’s misfortunes were defending champions Scott-Sram who failed to establish any sense of authority after Matthias Stirnemann took ill early in the stage. Despite finishing Stirnemann will play no further part in the race. “Matthias suffered so much today. He has a stomach bug and wasn’t able to eat and keep anything down,” said Schurter. “He was completely empty and because of the infection he can’t continue the race.”

Yesterday’s leaders, Daniel Geismayr and Nicol Rohrbach of Centurion Vaude, also battled with the early pace but remain positive despite losing their overnight lead. “It was not a good day for us. We lost contact with the front riders and just couldn’t get back,” said Geismayr. “It’s sad that we could not defend our yellow jersey but we usually get stronger with each stage so I’m looking forward to that.”

After a forgettable Prologue, team BULLS put on a sterling display of grit, experience and determination to

restore a glimmer of pride with a fifth place finish. “I was so disappointed yesterday but you can never lose faith,” said Platt. This morning I struggled again and Urs (Huber) thought it was all over for this year’s Absa Cape Epic but suddenly I found my legs.”

“I thought Karl was done because he looked so bad. I thought tomorrow I would have to start as an Outcast/Leopard,” chirped Huber.

As it stands Cannondale Factory Racing lead Investec Songo Specialized on the general classification by 40.9 seconds. Centurion Vaude are third, 5.36,3 back and less than a minute ahead of Alban Lakata and Kristian Hynek of Canyon Topeak in fourth.

“This is my first Absa Cape Epic, so to have been the first African team on the first real stage is a big occasion,” said Marais. “The conditions were really rough out there but my partner, HB Kruger, was riding incredibly well.”

Beukes and Jessop (PYGA Euro Steel) came home in third, a result that sees them leapfrog Timothy Hammond and Arno Du Toit (SPOT Africa) to the same position on the general classification.

Multiple World Champion Annika Langvad and her young American partner Kate Courtney overcame a puncture to surge to a second successive victory in the Women’s category on Stage 1 of the Absa Cape Epic on Monday.

The Investec Songo Specialized duo attacked early on the 110km stage which started and finished in Robertson. Despite a slow leak in Courtney’s back tyre, which at one point looked to have put their second victory in a row in danger, they were able to add to their lead from Sunday’s Prologue.

The pair finished the stage with a time of 4:45.22, while Langvad’s former partner, Ariane Lüthi, and Githa Michiels were second for the second day in a row. After losing another 52 seconds on Monday, the Team Spur combination is now two minutes and four seconds off the pace.

The young Silverback-KMC team of Mariske Strauss and Annie Last enjoyed a strong final 30 kilometres of the stage to claim third for the day and third overall. The team Ascendis Health/WIAWIS Bikes duo of Robyn de Groot and Sabine Spitz, who is suffering with a stomach bug, have slipped back to fourth.

Langvad explained the mini drama which nearly derailed their stage:

“Kate could feel that her rear wheel was leaking. We kept on riding for a bit but then she said: ‘No, we need to plug it.’ When we plugged it the second team caught us and they got a gap. We chased and got back to them and then on a climb we attacked and were able to keep it to the end.”

Courtney was full of praise for the calm demeanour of her experienced partner when they had to stop and fix the leak.

“They say anything can happen in this race and we definitely had that experience today,” said the American after crossing the line. “Luckily we were able to fix the puncture quickly, but I learned a lot from the master (indicating Annika) about staying calm and just working together as a team and maximising ourstrengths.

“Annika obviously has a lot of experience, but this is my first Absa Cape Epic and one of the first times I have been out there so long and responsible for my own equipment. She is teaching me a lot.”

Langvad, a four-time World Marathon Champion as well as a former Cross-Country World Champion, said the first long stage of the 2018 Absa Cape Epic was “hard” and “long” and that sentiment was shared by Lüthi.

“It was certainly a tough day out there today, but really beautiful riding,” said the rider who partnered Langvad to three wins in 2014, 2015 and 2016. “In the beginning Annika attacked really early up the first climb and Githa and I managed to stay with them quite well.

“Then Githa had a stick or something in her spokes and dropped a bit back, so I also had to let go and see if Githa was okay. She sorted it out and chased back really hard and caught me.

“From there we could always see Annika and Kate ahead of us but we never quite managed to close the gap until they had their puncture. We then thought maybe we can take the stage if they take long enough to fix it, but they rode really, really strong and got back quickly – and still had enough to take the stage.”

Despite finishing runners up for two days in a row, Lüthi is still confident they can challenge.

“We just always have to be there and do our job. It is a long, long race and anything can happen. We must keep the pressure on them and just stay in the hunt.”

Strauss and Last are now eight minutes behind the leaders, but have a healthy five-minute cushion over De Groot and Spitz, the same team they edged into third position in 2017.

“Yah, it was a tough day,” said Strauss. “We felt it a bit toward the end but Annie was super strong and we worked well together. It was a little cat-and-mouse game we were having out there with Robyn (de Groot) and Sabine (Spitz).

“This is the second year Annie and I are racing together and we just look at each other now and we know what the game plan is.

“We figured if we could get a gap on (Robyn and Sabine) on the last big descent at about 72 kays then we might be able to pull a gap on them to the finish and that worked really well. We are just happy to be on the podium.”

Stage 1 saw the end of any hope for defending champion Esther Süss when her Meerendal CBC partner Angelika Tazreiter was knocked off her bike by a rider from another batch who caught them. The crash injured Tazreiter ‘s shoulder and she was forced to withdraw early on in the stage, while Süss will continue wearing the newly renamed Leopard jersey for solo riders.

It has been a frustrating Absa Cape Epic for Süss with the drama starting even before the Prologue. Tazreiter was called up to partner Süss after her partner from their 2017 victory, Jennie Stenerhag, injured her knee in a fall a couple of weeks before the race.

The dormakaba team of Candice Lill and Amy Beth McDougall are lying fifth overall with a big lead in the inaugural Absa African Women’s special jersey category. Currently lying second, about 36-minutes behind in that category are Western Girls’ Nadia Visser and Katie Lennard, while Nolands Spar Ladies team of 14- time finisher Hannele Steyn and Jeannie Dreyer are third.