Red Bull Rampage – freeriding in its purest form! Since its inception in 2001, Rampage has evolved to become the premier of all mountain bike events and now YT will become an official sponsor: it is the cataclysmic conclusion to a long and hard season, in which the best of the best come together to duke it out for mountain biking’s most prestigious title over the gnarliest terrain imaginable. We’re not talking about jumping a few piles of dirt here: from the preparation and line choice to sending murderously big gaps and drops, Rampage requires riders with nerves of steels and big balls!
There are more reasons to consider the Red Bull Rampage also as a YT Industries event: with Cam Zink (2010) and Andreu Lacondeguy (2014) there are already 2 Rampage-proven winners who could take home the 2015 title. In total 5 YT Team riders will make this year’s journey to Utah: in addition to title holder Andreu Lacondeguy (ESP) and Rampage legend Cam Zink (USA), Yannick Granieri (FRA), Rampage veteran Kelly McGarry (NZL) and big mountain expert Robbie Bourdon (CAN) will all launch themselves off Utah’s red cliffs. 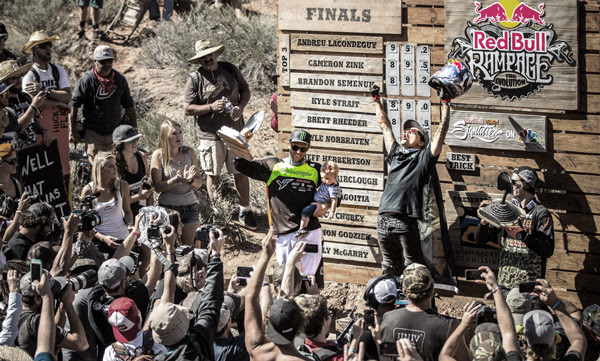 “We love this event! Not only because we are well represented with 5 athletes, two of whom are previous winners, but also because Rampage corresponds perfectly to our vision of mountain bike freeride: an infinite number of lines, fat drops and jumps, and the world’s best freeriders coming together in front of thousands of fans. Under these conditions it was actually pretty obvious for us to decide to become a partner of this event, and we’re thrilled to be heading to Utah” says Markus Flossmann, YT’s CEO.

Fans attending Rampage will be able to check out the Capra and Tues bikes in person at the YT booth on site, and those who know YT know that the good times will roll too! After the finals and the award ceremony there will be a signing/selfie session with the YT athletes under the motto: “We sign everything – your car, your dog, your mother in law – as long as it is not a contract!”