Today, RockShox is finally making public their new heavy duty single crown fork. The fork is named “Zeb”, short for Zebulon, in reference to Zebulon Pike, whom Pike’s Peak was named after. The all new fork features 38mm stanchions and is available in both wheel sizes from 160mm-190mm travel. As you could imagine, Zeb is aimed at Enduro and E-Bike applications, in RockShox’ own words it: “bridges the gap between Lyrik and BoXXer” 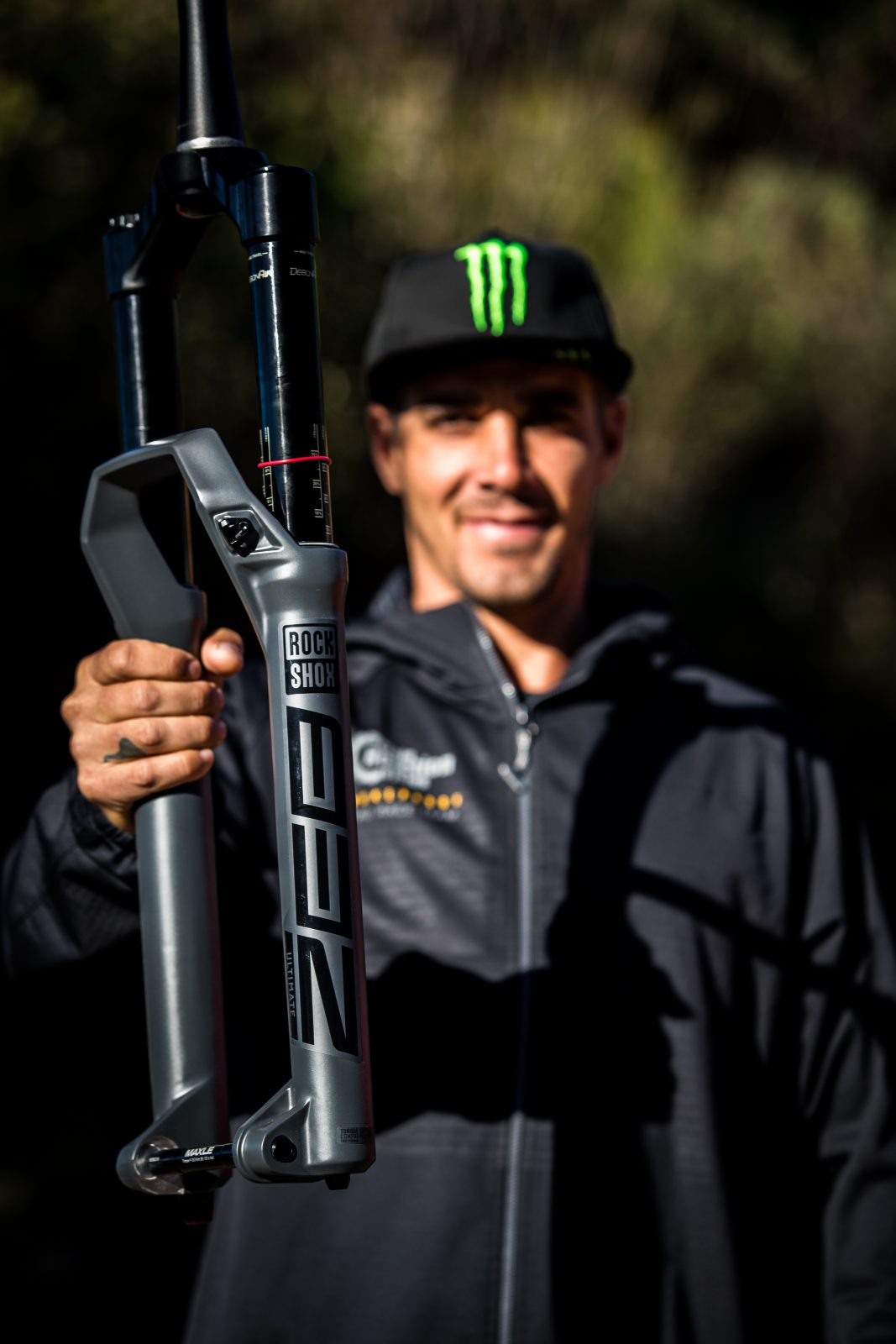 If it wasn’t obvious, compared to the Lyrik the Zeb picks up some extra weight (a little over half a pound). That weight does however come along with a 21.5% increase in torsional stiffness, a 7% increase in side bending stiffness and 2% more fore/aft bending stiffness, compared to a Lyrik. The Zeb will be offered in 3 tiers: Ultimate, Select and a standard base model, which is aimed at E-bikes using “Dual Position air”. Lastly, RockShox has also designed a new Zeb Fender that attaches via 3 bolts, so you can ditch the zip ties. 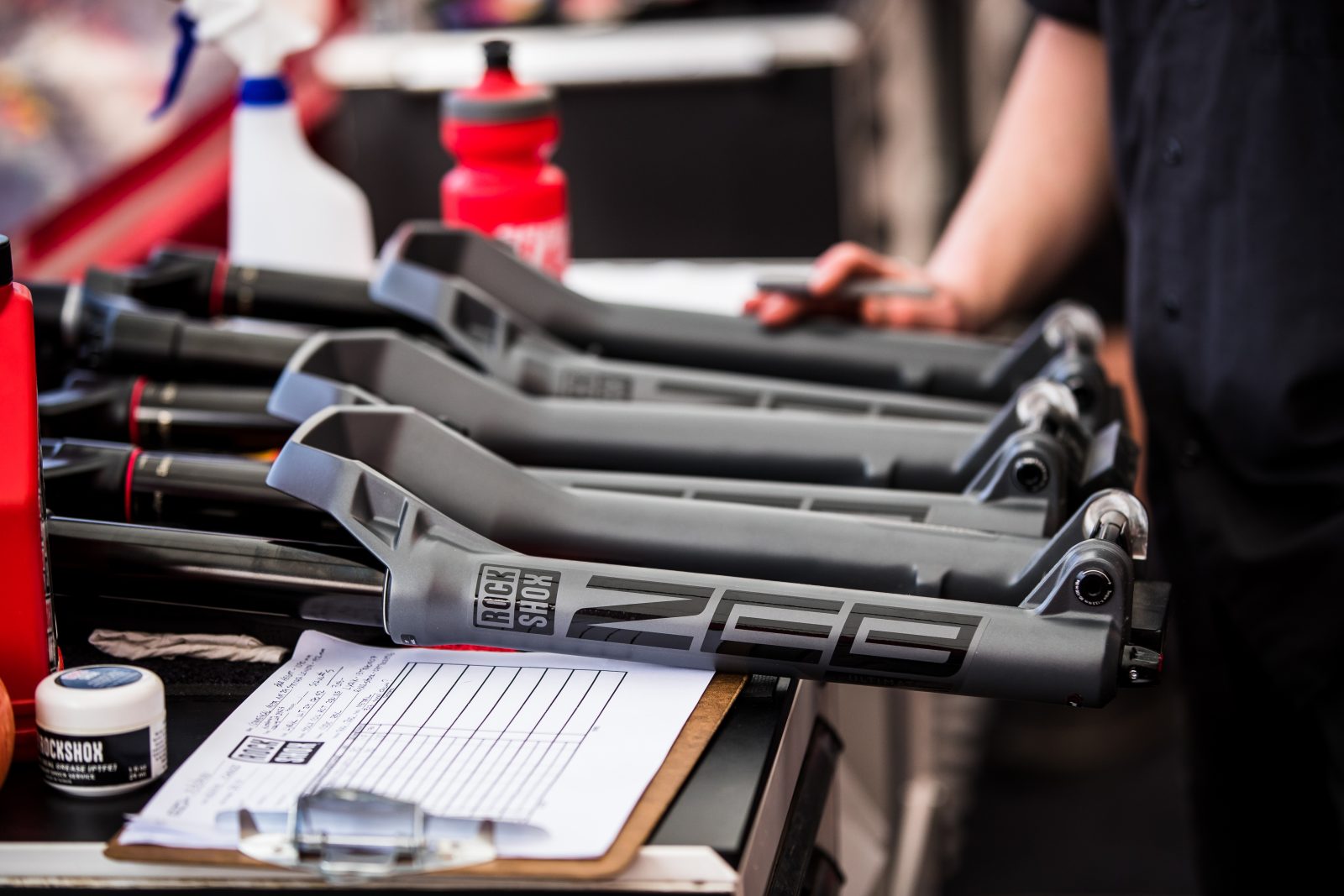 Why did you make ZEB?

ZEB bridges the gap between Lyrik and BoXXer. Our athletes, and equally our customers, have been asking for a stiffer, more aggressive fork for long travel applications. What is the intended use of this fork?

The larger diameter stanchions and stiffer overall chassis are best suited to long travel Enduro bikes (170-190mm) and also eMTB’s. The overall aesthetic of ZEB means the fork is suited to larger diameter frame tubes such as those found on eMTB’s. 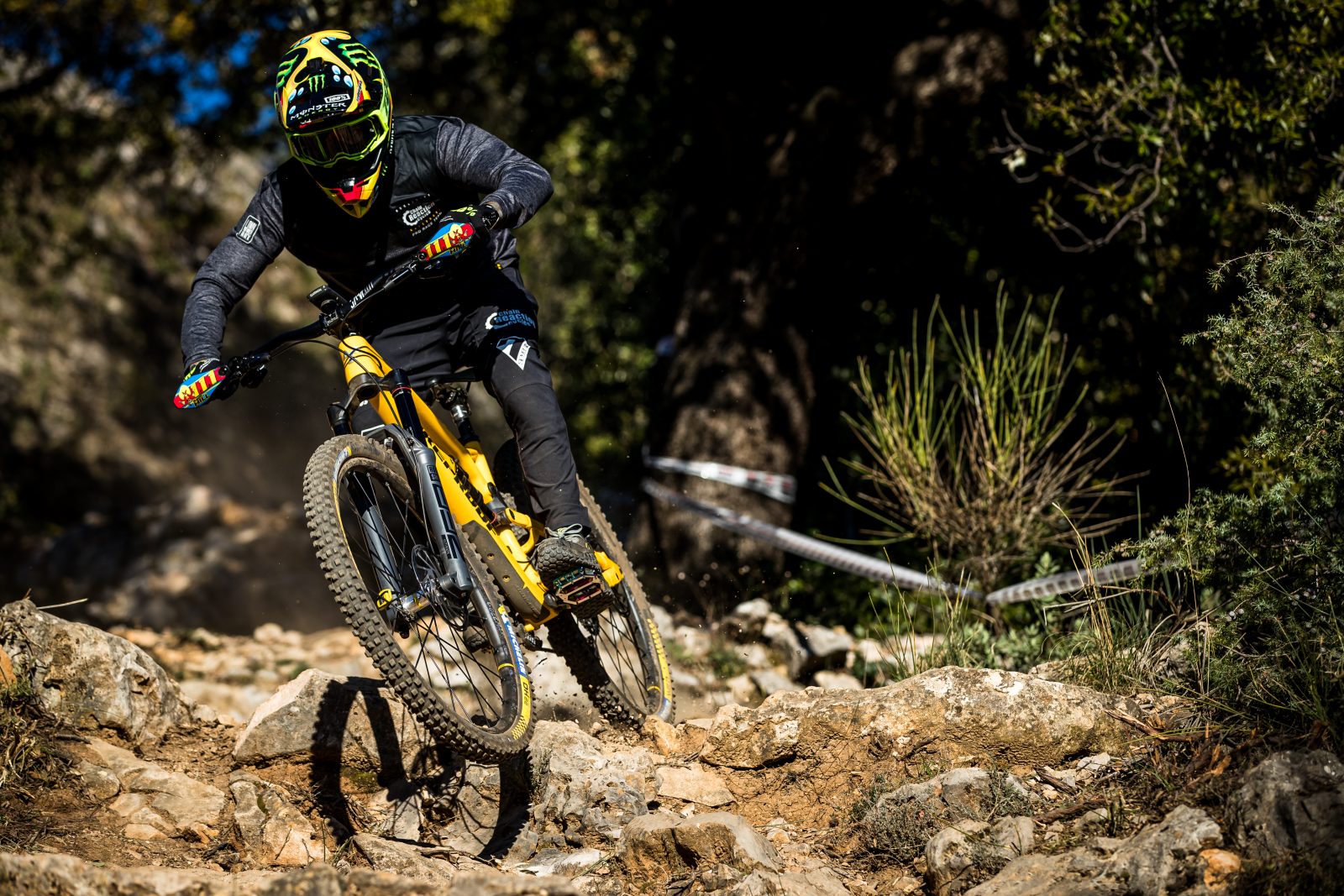 Will smaller, lighter riders benefit from ZEB in the same way heavier and more aggressive riders would?

Yes. During ZEB’s development we tested the fork with many of our athletes and customers. The overwhelming feedback is that the stiffer chassis and larger diameter stanchions increase sensitivity and the performance of the fork in extreme circumstances. This level of increased performance is suited to both heavier and lighter weight riders alike, where the only variance is air spring pressure and damping adjustments to suit the rider. How does the DebonAir air spring differ on ZEB from Lyrik? Are they interchangeable?

They are not interchangeable. The air spring on ZEB and Lyrik are different both in their design architecture and piston diameter, to suit either a 35mm chassis for Lyrik or a 38mm chassis for ZEB. In creating an entirely new chassis with ZEB we were able to redesign the air spring from the ground up. 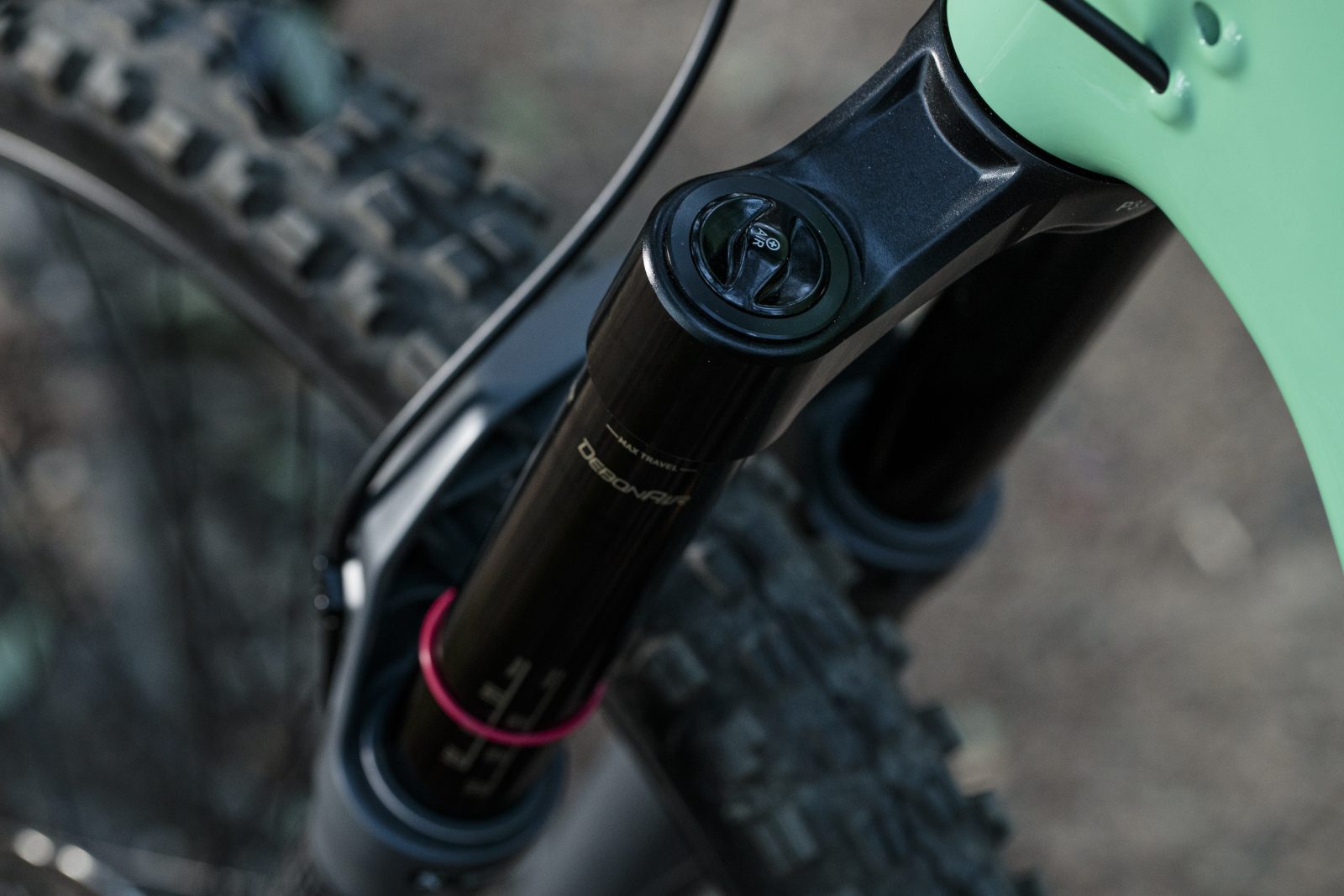 Are there different air springs available for ZEB?

As with all of our fork offerings, we will deliver different air spring lengths so riders can change the overall available travel of the fork. For ZEB this will range from 160mm to 190mm of travel. We will also be offering a Dual Position Air spring option in our eMTB configurations starting at 150mm of travel. 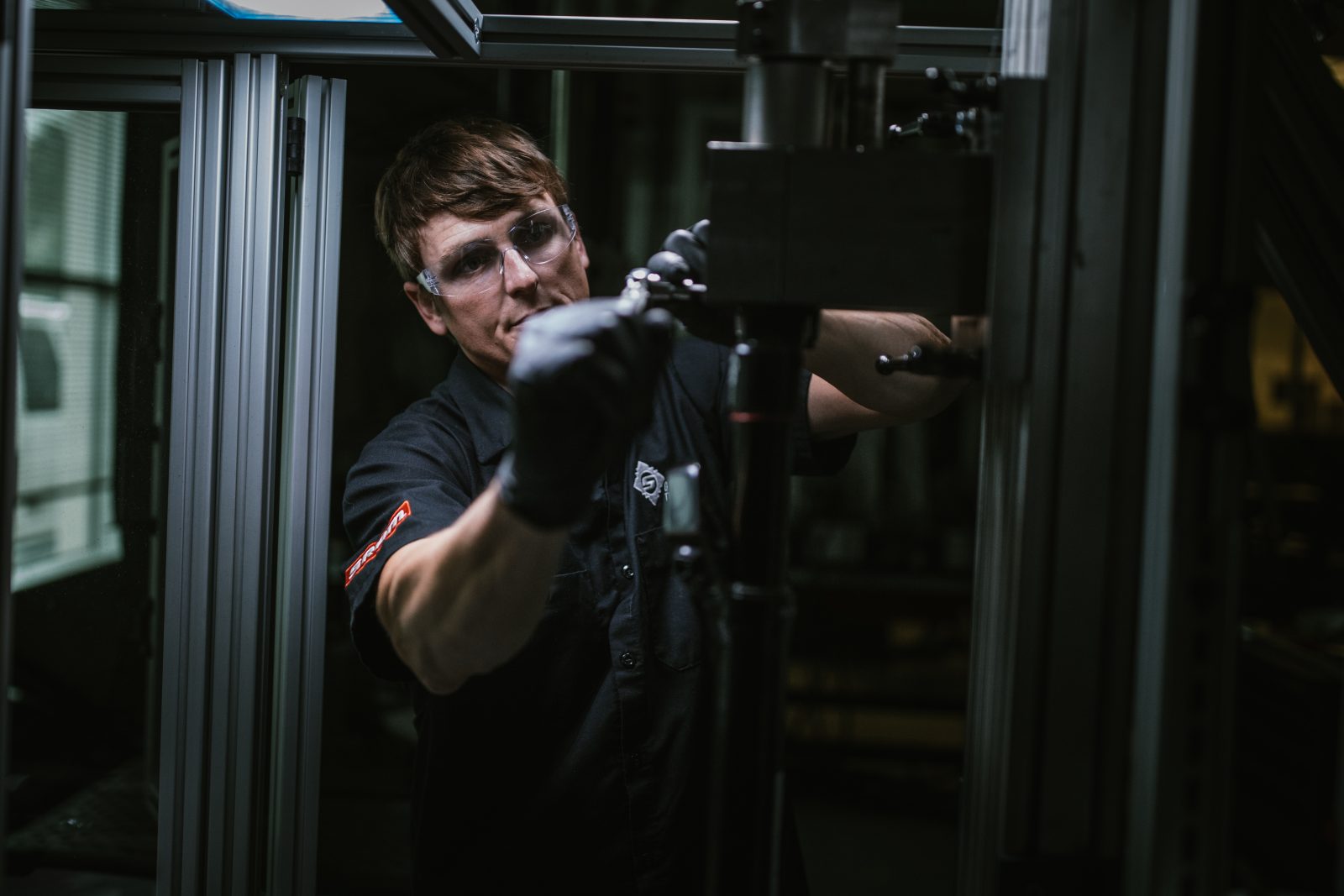 Can you explain the cup shaped air spring piston and how this helps
with top-out?

The new air piston shape contains the top-out bumper and controls
its rate by not allowing it to expand as far as the bumper compresses
at top-out. 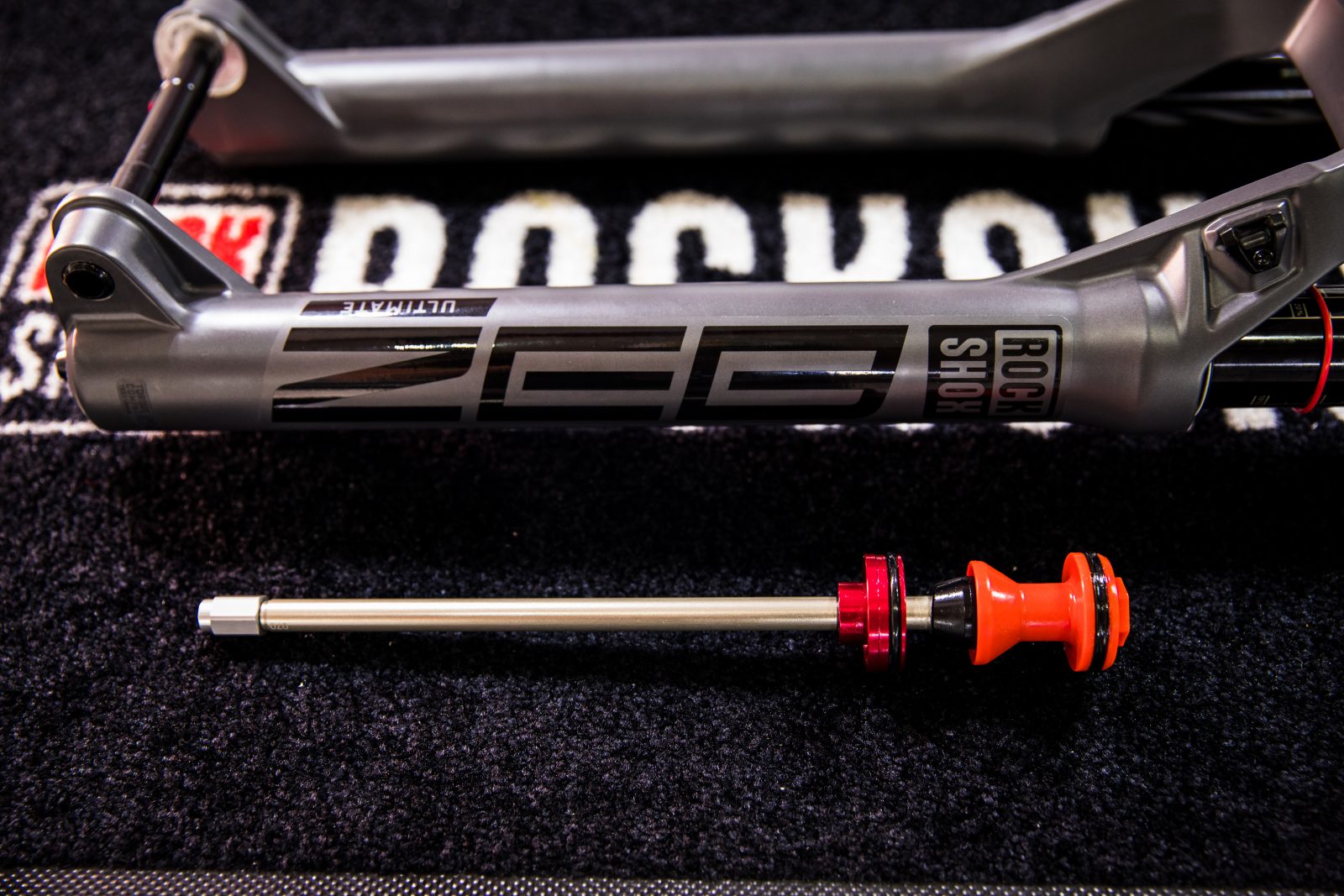 How much stiffer is ZEB than Lyrik? Is it stiffer than a BoXXer?

The ultimate aim with ZEB was not simply to create a stiffer fork. We realized an opportunity to apply similar technology and design characteristics from Lyrik and BoXXer into a single crown fork with larger upper tubes to benefit riders pushing the limits of long travel Enduro and eMTB’s. Overall stiffness is measured in several different ways; it’s not just one number. ZEB is stiffer, but that should not be confused with what the required amount of stiffness is for Lyrik. We are very happy with those numbers for the intended use. With ZEB we have been able to offer a fork that sits between BoXXer and Lyrik. 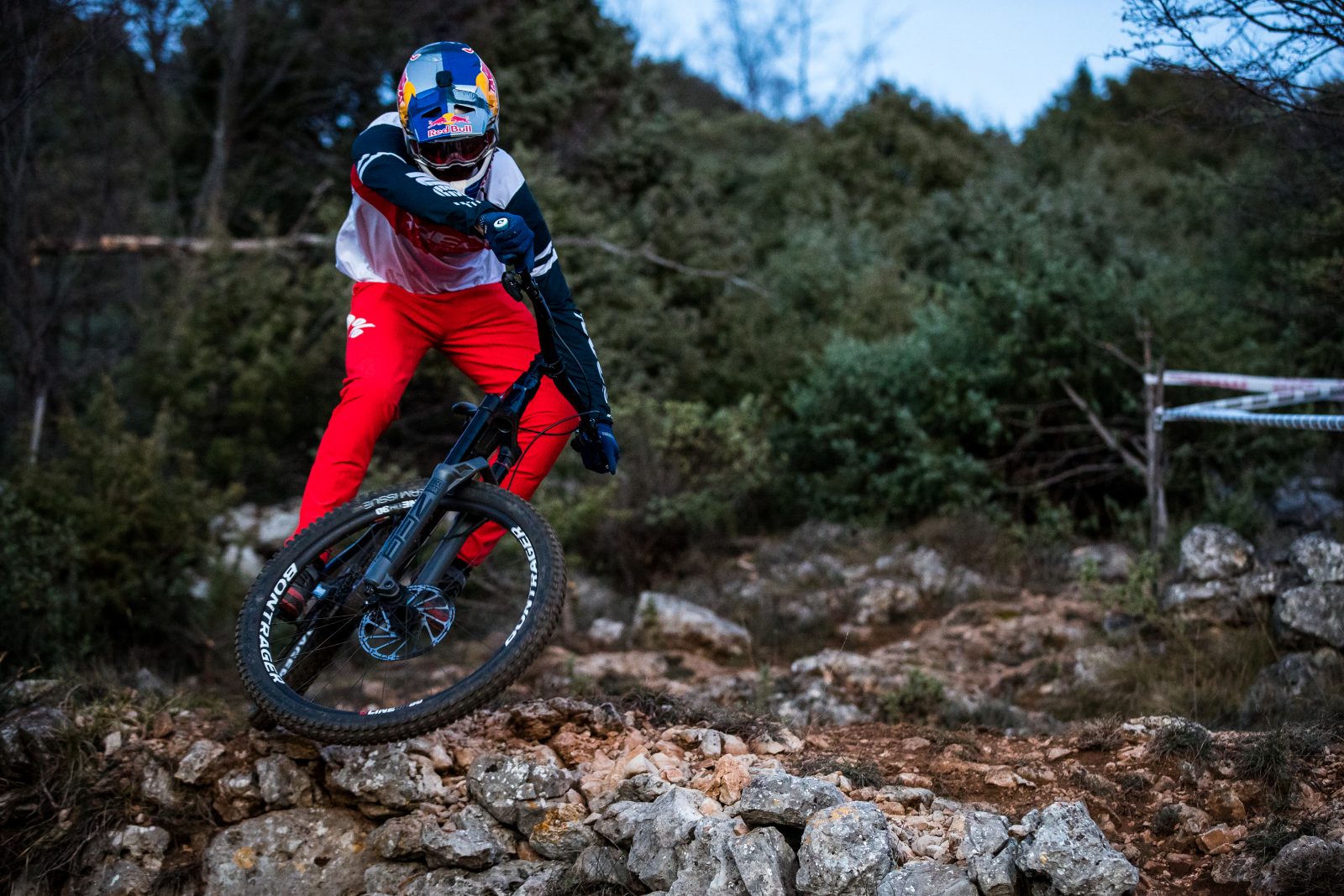 Did you consider using a 20mm axle instead of 15mm?

We considered 20mm, but ultimately ended up going the 15mm route. A properly designed 15mm axle can be as stiff or stiffer than a 20mm axle. Riders can also use Torque Caps to improve stiffness using a 15mm axle means that more riders can benefit from equipping their bike with ZEB without having to change the front wheel to accommodate a larger diameter axle. Why are there different crown sizes available, and why not just one size?

As new bike models have launched into the market, there has been an increase in head tube diameter on frames. In order match this increase in size, we have created an oversized crown, which created a more optimal interface between the crown and headtube on these framesets. We have created a smaller version to fit with models that have smaller head tube diameters. There is no change in overall performance or stiffness between the two crown options. 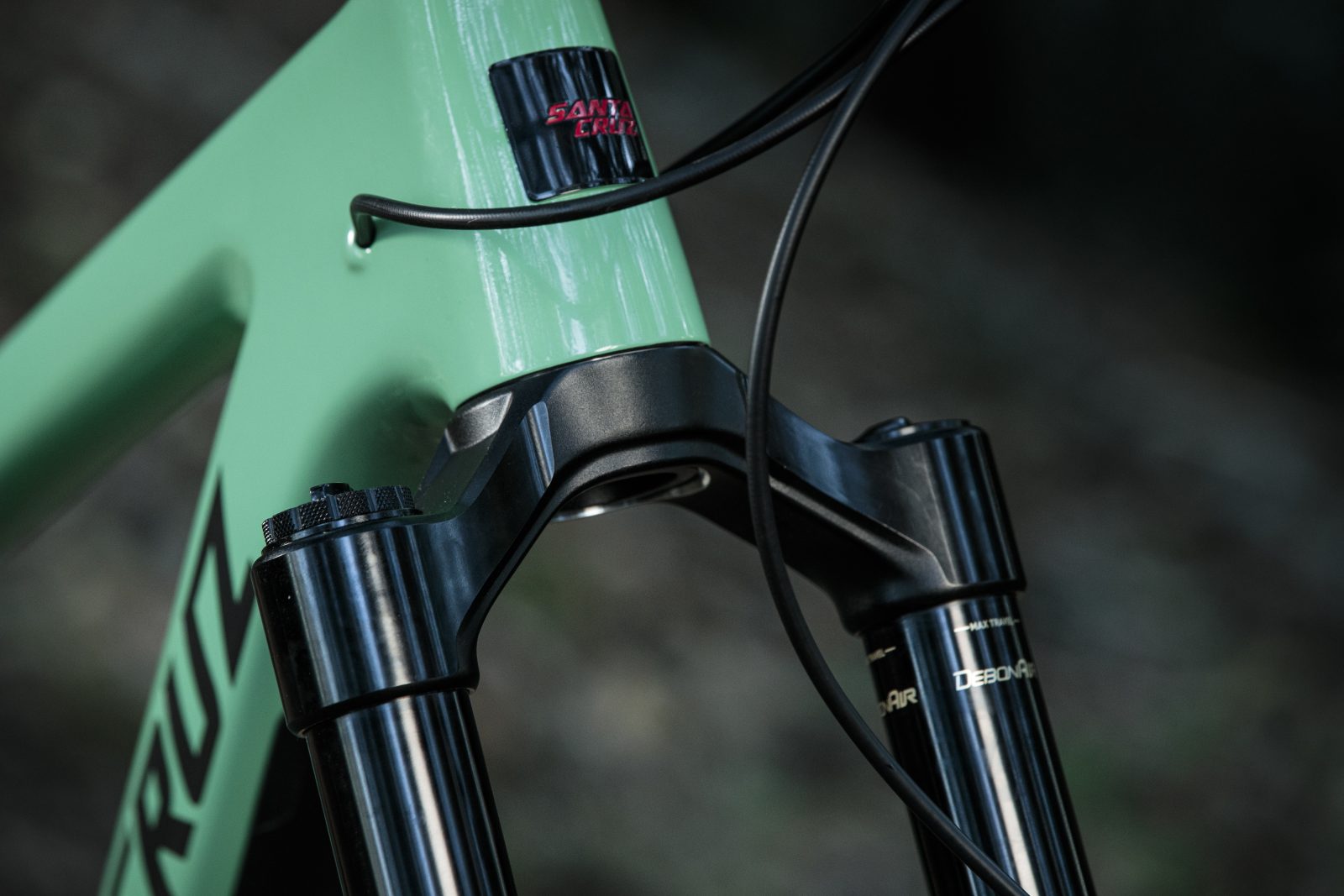 Will all ZEB crown sizes be available Aftermarket?

As with all of our product offerings, we will ensure that the most common sizes and configurations are offered in the aftermarket channel. 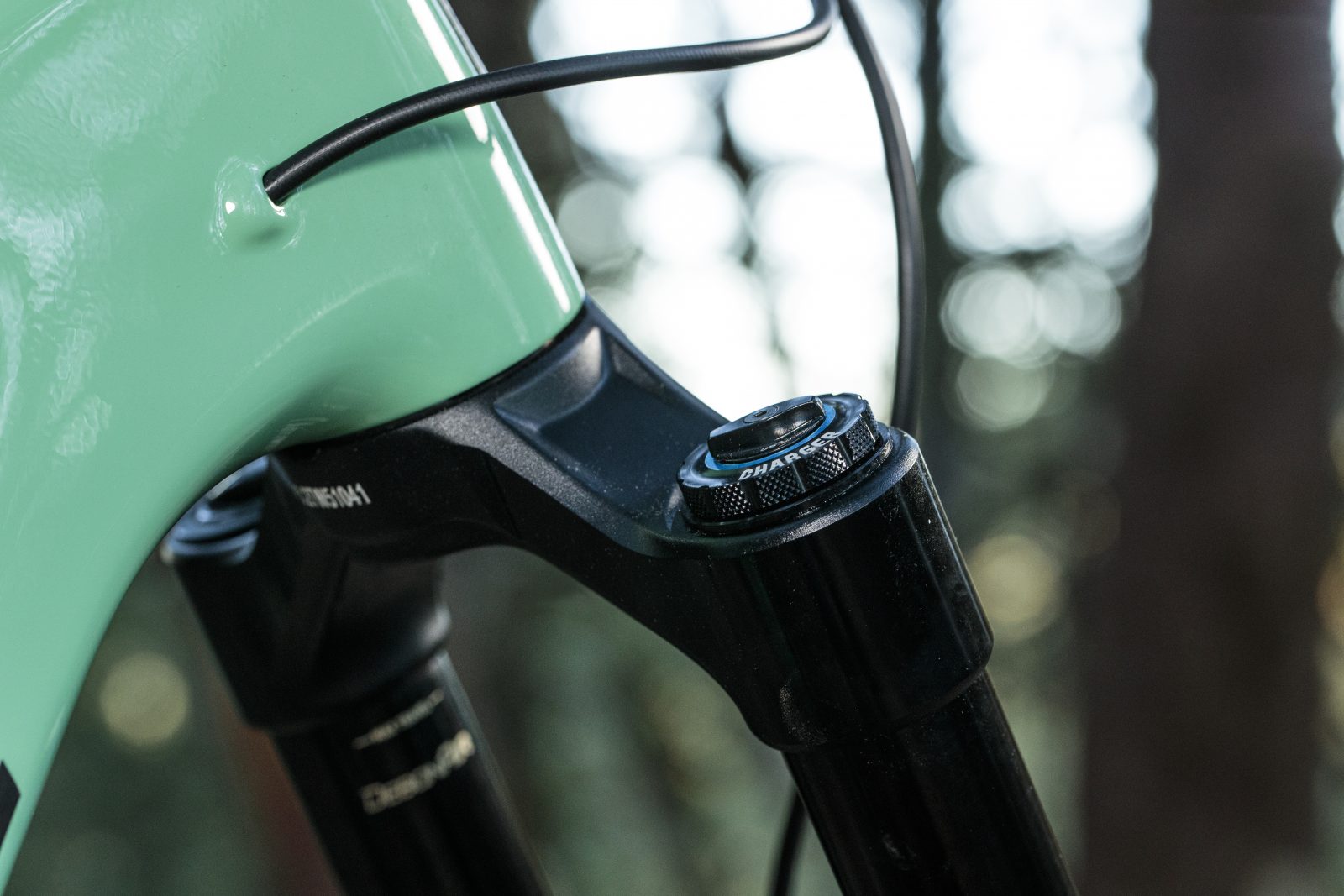 Are there different steerer diameters available for ZEB?

ZEB will be offered with both 1.5″ and 1.8″ tapered steerer options.

Is there a new volume spacer to change the air spring characteristics?

ZEB will use the grey volume spacer that you are familiar with from all of our 35mm chassis forks. What rotor size is the direct mount brake for? What is the smallest and largest size rotors I can run?

ZEB is 200mm direct mount. For a 220mm rotor a 20mm post-mount adapter is needed. 203 Rotors can also be used with a corresponding spacer kit.

How does the air spring pressure chart differ from Lyrik?

Because the overall air volume in ZEB’s 38mm upper tubes is larger than in Lyrik’s 35mm, the required pressure for a rider is lower in ZEB. Lower pressure means single digit changes in PSI make a bigger percentage difference in the air spring, therefore it’s somewhat easier to tune the air spring to suit a rider’s needs.

Why have you added another level on the Signature Series line up?

ZEB is part of the RockShox Signature series and offers Ultimate, Select+ and Select models, with the addition of a new base pricepoint: ZEB.

Tell me about the new damper in the ZEB R.

The Charger R damper is a version of our current Internal Floating Piston (or IFP)-based Charger RC damper. The R version has a factory set compression assembly and features an easy to set up rebound adjuster. We think the ZEB R and this damper will find a perfect home on the front of many eMTB’s.

We have offset any friction increases from the surface area of the 38mm upper tubes by placing extra attention on bushing lengths and overlap. This keeps the fork sliding smoothly regardless of the load.

How does the axle-to-crown measurement change between ZEB and Lyrik, considering they both offer the same travel options?

For the same travel, ZEB is 5mm longer axle-to-crown versus Lyrik. The damping characteristics of the Charger 2.1 damper has remained unchanged from Lyrik. However the damper itself is architecturally different because it needs to fit into a 38mm stanchion fork, therefore it is not cross compatible with any of our 35mm chassis forks.

Do the oil amounts in the lower legs change from Lyrik to ZEB?

We have increased the oil volume in both lower legs of ZEB to 20ml, which accommodates the larger chassis and overall internal volume of the fork’s design. The look is very aggressive and pronounced architecturally – does this design have any performance benefits or are they mostly aesthetic?

We certainly aimed for a more striking and aggressive look with ZEB, and with these design developments come performance benefits. Most notably the design and casting of the lower leg adds stiffness in the most important areas but also compliance where required.

The lower leg fork arch looks like it sits much further forward. Why?

The design of the lower leg has to accommodate many factors – two of these include clearance for mud guards at full travel as well as headtube clearance at bottom out.

What is the most appropriate RockShox rear shock to match with ZEB?

ZEB will work across the board with all of our rear shock offerings, which offer a comparable amount of travel on a given frameset. Most notably, these would be our Super Deluxe and Super Deluxe Coil shocks. What is the largest size tire I can use with ZEB?

Is there a remote option available or ZEB?

Currently, we do not foresee the need for a mechanical remote option for ZEB. Is there a 2 position ZEB available?

Yes. There will be Dual Position Air option available on ZEB. This will be offered exclusively in our eMTB configurations.