A few months back, Whistler Canada based suspension tuning company Vorsprung sent over a coil spring conversion for testing dubbed the Smashpot. The kit is set up to work with mid to heavy duty single crown forks from RockShox, Fox, Ohlins and DVO. To keep things simple, the springs and hydraulic units remain the same across fork platforms – riders can simply change out top caps and foot nuts in the event that they wanted to transfer the Smashpot from one fork to another. A bit more on that later – for now, let’s get into the nitty gritty and see how it fared on trail… 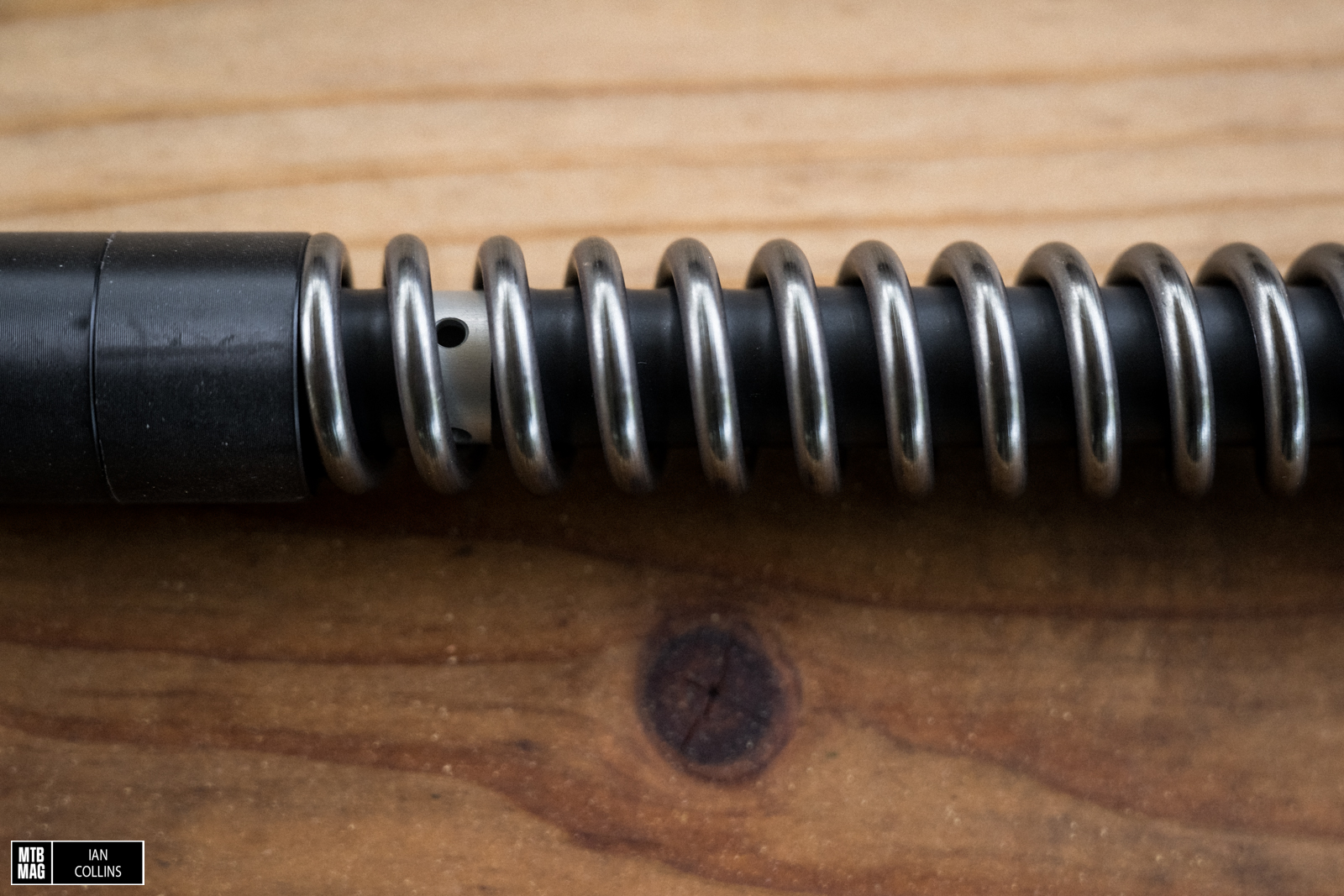 The central premise behind the Smashpot is a coil spring with an open bath speed sensitive hydraulic valve that engages in the last 50mm of travel to provide end stroke ramp and prevent bottom outs. This valve is externally adjustable via a knob at the bottom of the fork. 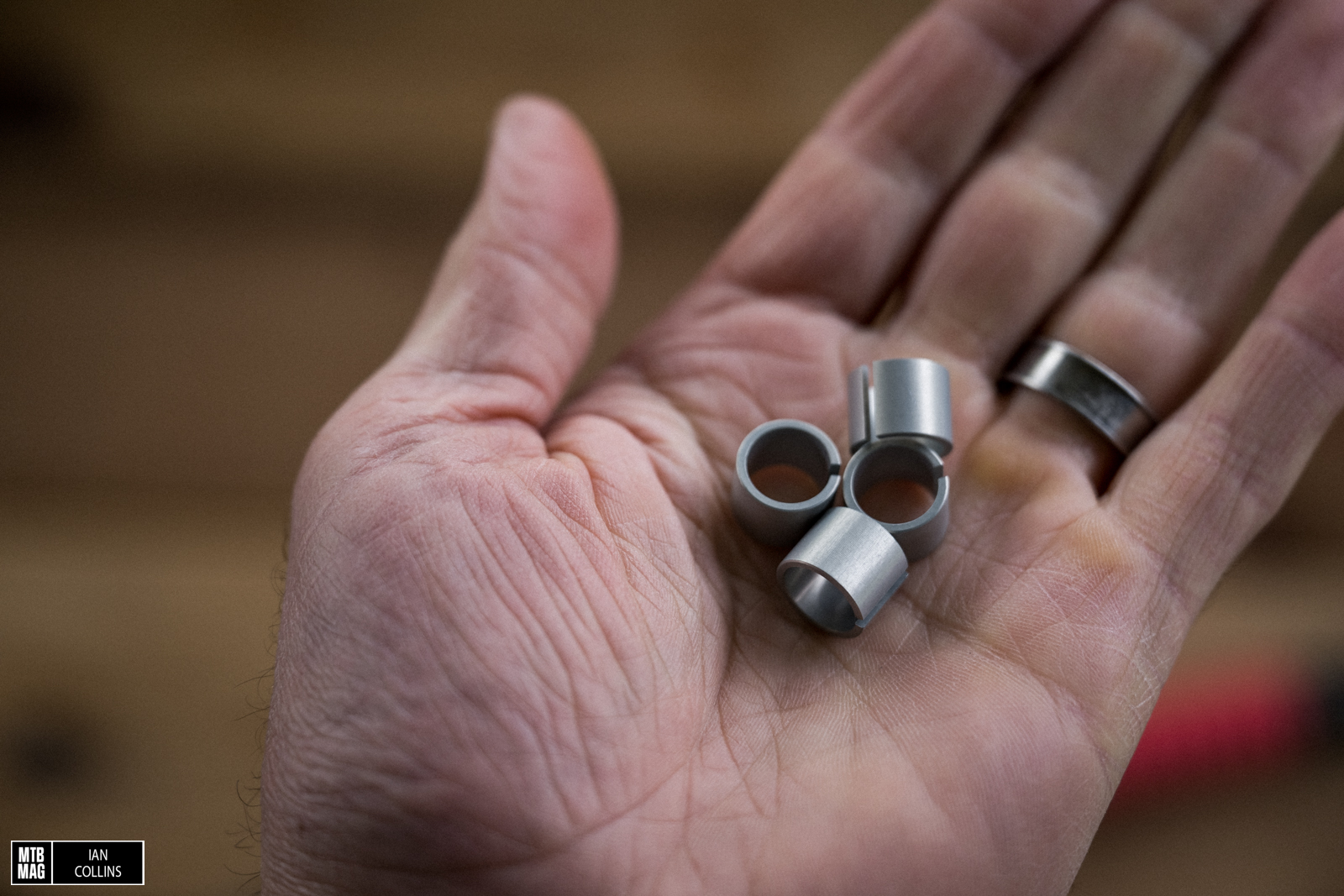 The kit ships with a handful of 10mm aluminum spacers that allow you to select your desired travel. It’s important to verify the maximum travel of your fork if you intend to give it a travel bump. 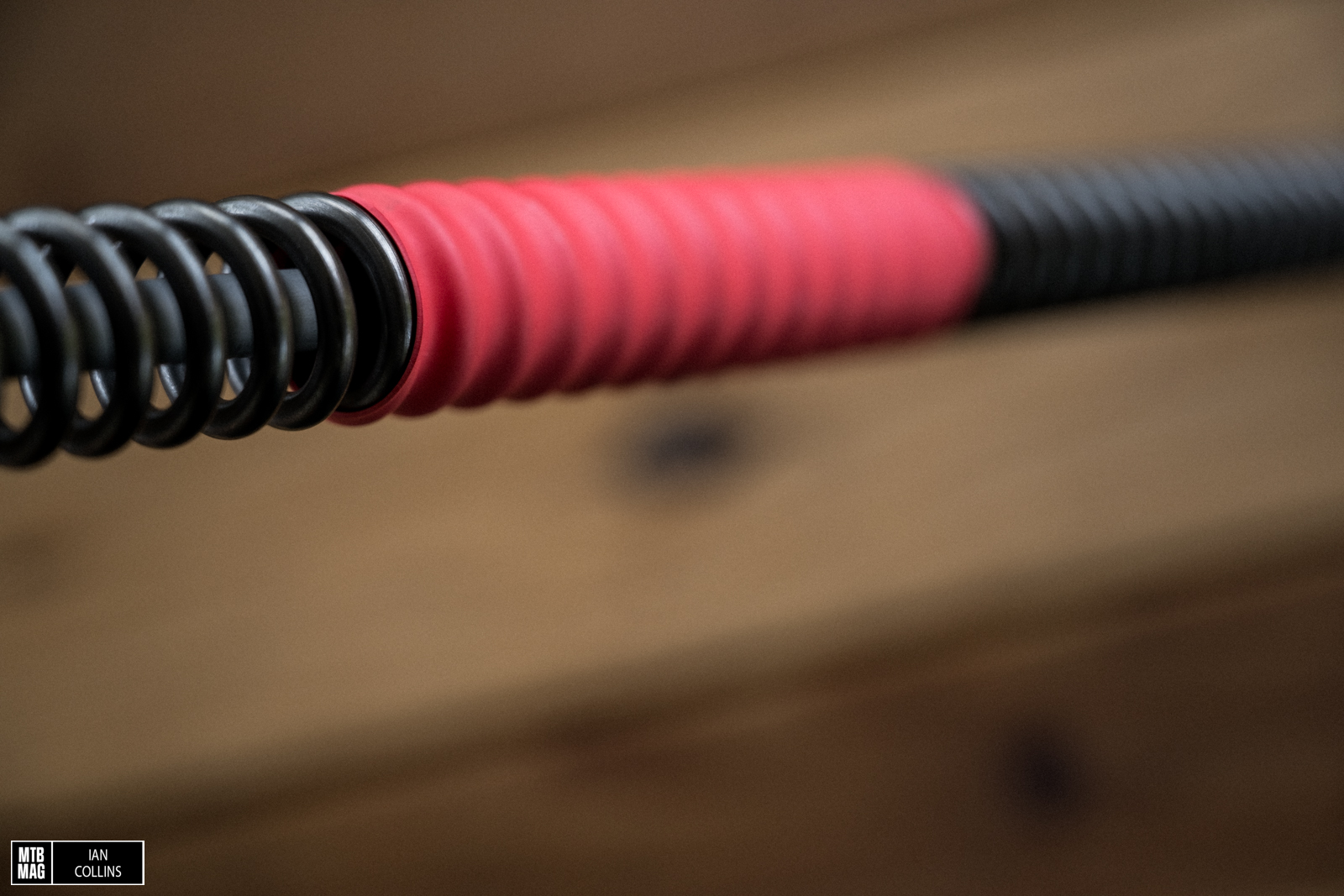 Because the travel is not pre-set and is thus set by you, the rider, it’s up to you to place and heat shrink the spring isolator as well as some bits on the bottom out assembly. These sleeves keep things quiet and prevent metal-on-metal rubbing. 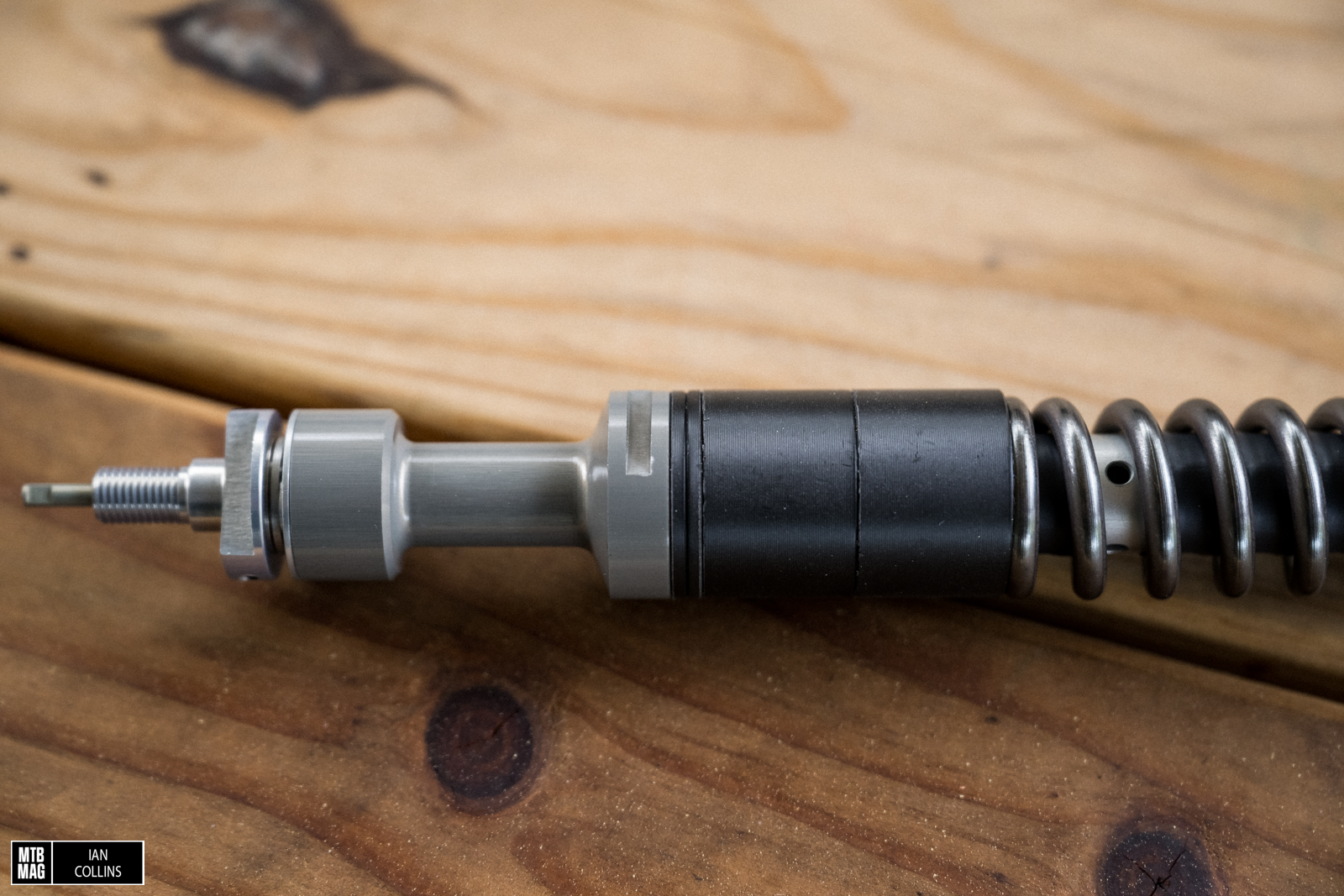 A closer look at the base of the bottom out unit. Straight forward, high quality and with some hard anodized bits for good measure. 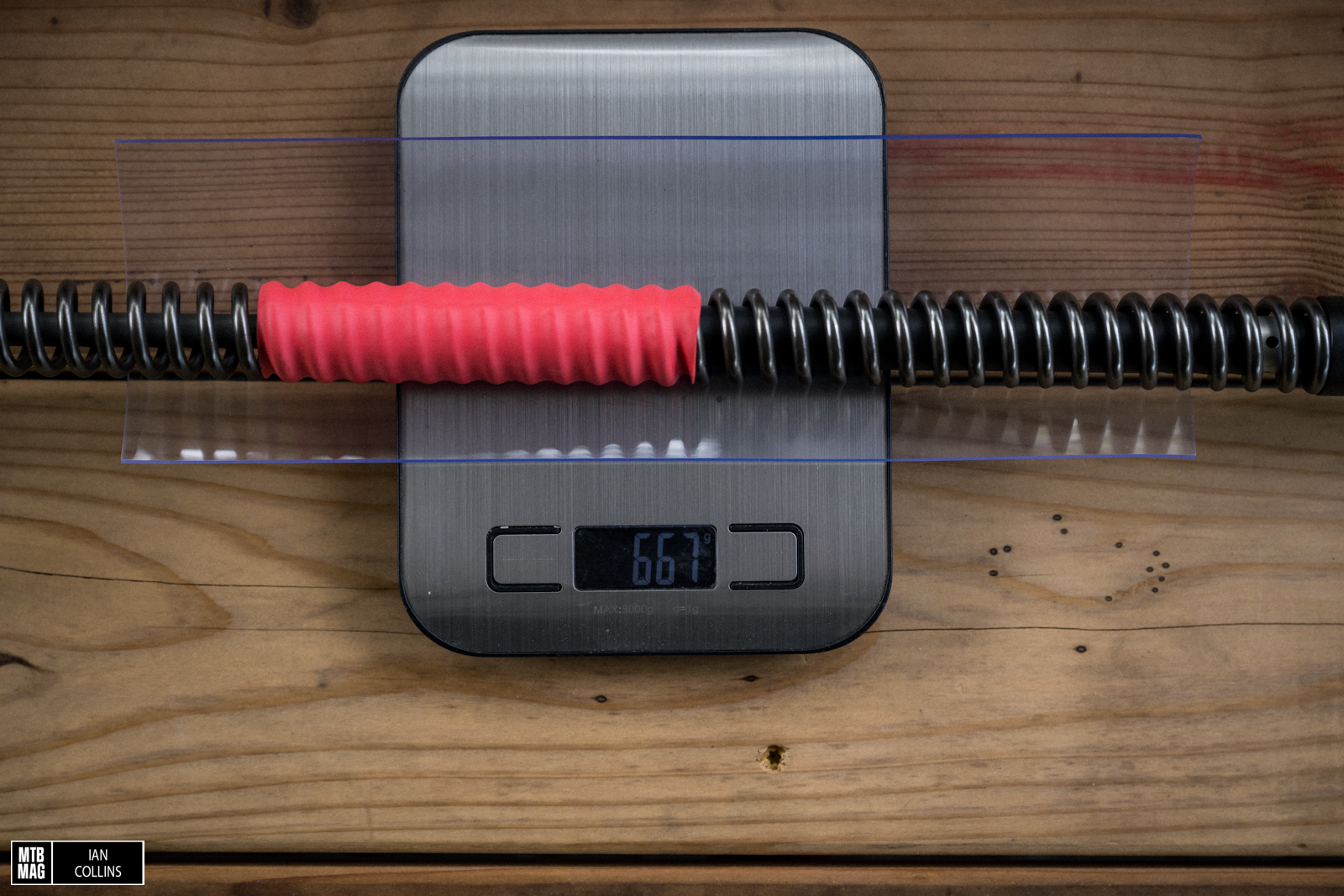 The complete assembly for my 170mm RockShox Zeb on scale. Note the PVC sleeve…The larger diameter stanchion on Zeb and 38 require it to fill some space on the inside. This means that those two forks can be returned to use with an air spring because the inner diameter of the stanchion is fully protected, whereas it isn’t a guaranteed thing on other forks, according to Vorsprung. 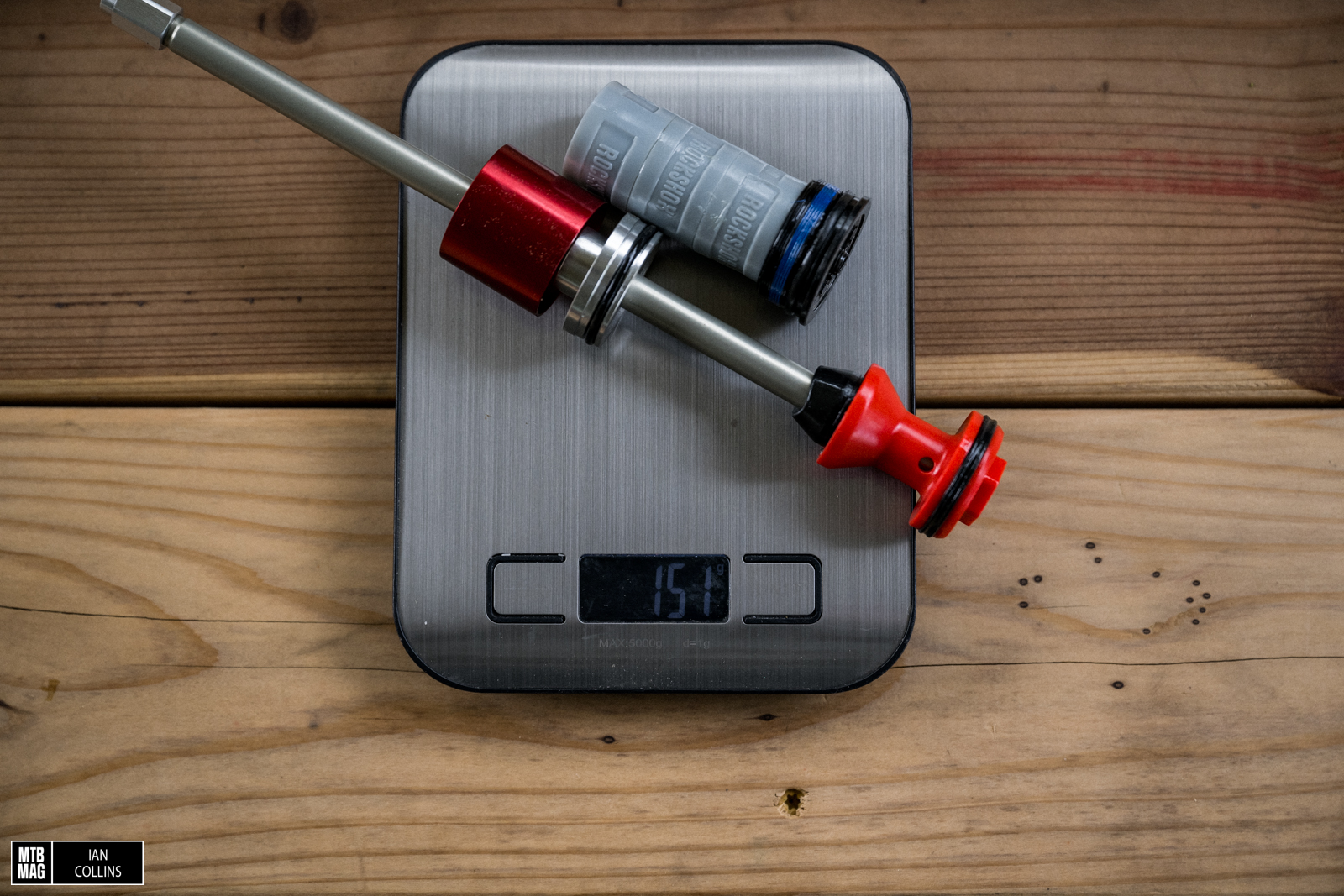 The weight of my Zeb air spring assembly with the three reducers I was running. This made for a 516 gram difference, plus the additional weight from 90ml of 20 weight fork oil.

Vorsprung Smashpot on the trail

Starting with the installation, although I thought it might be a bit of a complicated job upon first glancing at the contents of the kit, things went smoothly and quickly. Vorsprung’s instructions are simple and clear as day – I’d estimate that it took 30-45 minutes in total. Once I checked sag and hit the trail, that verified the nifty spring rate calculator was bang on in its suggested rating for me (50 lbs/inch). For what it’s worth, additional springs can be purchased for $61.50 each. I have to take a second and give Vorsprung props for offering 11 springs over a massive range – something which must cost quite a bit of money on their end. This means that the end user won’t have to compromise or find themselves between spring ratings, ultimately improving ride quality. I’ll get it out of the way right away and say that the biggest setback to this system is its weight. In the case of my Zeb, it tacked on roughly 1 & 1/3rd pounds, which is quite a bit. With that in mind, it seems like it’d be best for park riding, on an e-bike or being piloted by a very fit enduro racer who puts performance above all else. Right away, I noticed a massive improvement in the small bump sensitivity. This was mainly because of the greatly reduced breakaway force due to the absence of the main seal in the air spring shaft assembly. The other area which improved massively was in the mid stroke, where I didn’t feel like the fork got as wild and out of control in successive square edge hits at speed. There was a huge improvement in control and my hands were grateful as they found great relief. It’s worth noting that I installed the Smashpot on a Zeb Select+ with a mid level damper. Interestingly, I found that it exhibited a much better ride quality than the flagship Zeb RC2 with a Charger 2.1 damper. Anyhow, while you can manipulate the linearity/progression of the air spring curve via volume reducers in most forks these days, it’s fair to characterize the Smashpot coil system as having a more linear feel than the average air sprung options out there. What I think we’re really comparing here is the feel of end stroke progression offered by pneumatic ramp up versus the hydraulic bottom out valve’s ramp up. And in short, I think Smashpot offers a huge upgrade in that regard. The rest of its improvements are mainly due to the fact that it simply has less stiction. From a sheer overall performance standpoint, a coil spring in concert with a hydraulic anti-bottom out is superior to an air spring’s inherent end stroke ramp up. That is why it is the method of choice in the motorsports world, on flagship MTB suspension like Push and is now becoming more commonplace with its introduction into the rear shocks of RockShox’s 2023 lineup.

As far as value is concerned, the Vorsprung Smashpot’s price seems fair given how many options it allows for in terms of travel adjustment and its broad spring range. It’s also well built and exhibits an incredible ride quality, which serves as a reminder that coil can be superior to air in many regards – in particular if it’s well supported by other design elements such as hydraulic bottom out. The only nagging setback is the substantial weight penalty. For some riders in some situations this won’t matter, but for others it could certainly be a deal breaker. Either way, the Smashpot was utterly transformative in terms of its on trail ride characteristics and it will remain on the front of my e-bike indefinitely.