A few years ago a variety of companies started to sell directly online, no distributors and no shops. Slowly these companies have gained more market share, respectively they have created bases in a few countries to support their clients. At first they sold bikes at an incredible price with top of the line components, but the frames gave the impression that they lacked some aspects of quality, design and performances. Over the years the frame designs and quality of finish have improved significantly. The prices are still competitive and the components are the top level of the best brands, but now also the frames are attractive such as the top brands frames. Some of this bikes are actually the most wanted models of a lot of bikers all over the world.

The model we tested from YT industries which is one of these companies is the Capra CF Pro, an Enduro focused bike. YT is a young company but has positioned itself in a strong position including taking on experienced athletes like Lacondeguy and Zink. There are also rumours that there will be a factory team at the DH World Cup in 2015.

YT industries sent us the Capra CF Pro in a Medium size for a three weeks test. We tried it on lots of different trails, including the Enduro World Series trails from Finale Ligure, for a really complete test. The YT Capra CF Pro is a bike dedicated to the modern Enduro competition, but it’s a great bike also for more weighty uses. Geometries intended for descend performances and generous travel with 170mm on front and rear for this frame, realized in robust High Module Carbon, with only the chain stays in aluminium alloy. Weight is pretty low, stiffness is good and every component is supposed for performances in descend, always keeping in mind the aesthetic. The overall look of the bike and the component choices is about quality and aesthetic look, inspired by DH racing that will make anyone understand what they can have from this bike, since their first look. 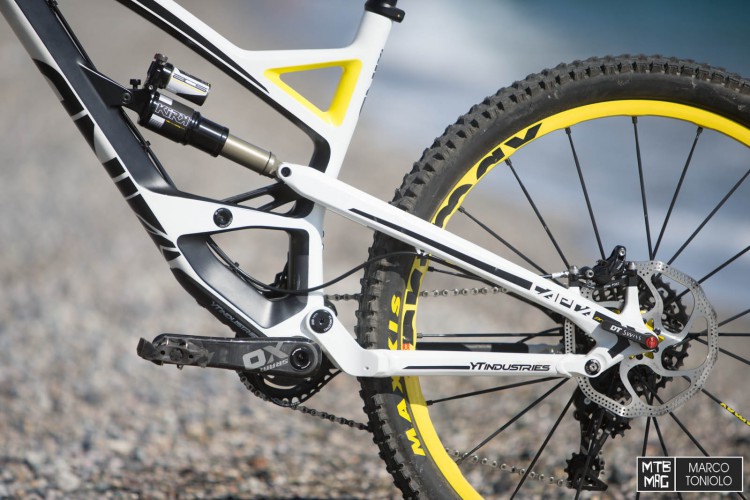 The suspension, called V4L (Virtual Four Link Chainstays Kinematics), is a Virtual Pivot based on the Horst system. The compression curve is progressive, while the IC positioning defines great conditions for the suspension work under the pedalling forces as well as the braking forces, where both are neutrals. 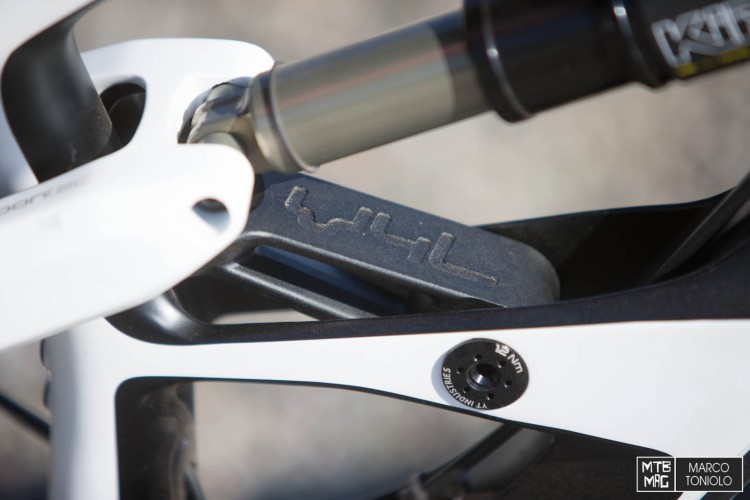 The V4L system is based on a BOS Kirk shock with a 222mm x 66mm travel. You can regulate separately the low speed compression and the high speed compression, the rebound speed and the air volume. You can also activate the pedal platform using a small lever on the shock. With the pedal platform on, the suspension is still active on bumps but the compression curve turns higher for a better efficiency under pedalling. The Kirk is a sensitive shock and gives a fluid feeling to the suspension system. It almost feels like a spring system on a DH bike. Before YT send the bike out they will tune the suspension according to the preferences of the rider including weight and riding style. In fact after playing with it we realised the base settings they gave us were optimal, maybe only one click of return speed was needed to suit us perfectly. The fork is a BOS Deville, again set up by YT, based on the hydraulics of its DH sister, the Bos Idylle, with low/high speed compression controls, rebound speed and air volume. It offers excellent supportive fluid travel, consonant to the bike’s character. In all cases the suspensions decals were also colour coordinated to the Capra. A SRAM XO1 system based on 170mm cranks with a 32T ring, is supported by the E*13 XCX+ chain guide, to prevent every remote possibilities of chain drop. The bottom bracket is a 30mm Pressfit and there is the ISCG system. YT also includes an adapter for a Direct Mount front dérailleur,  for everyone wants to use a 2X system. 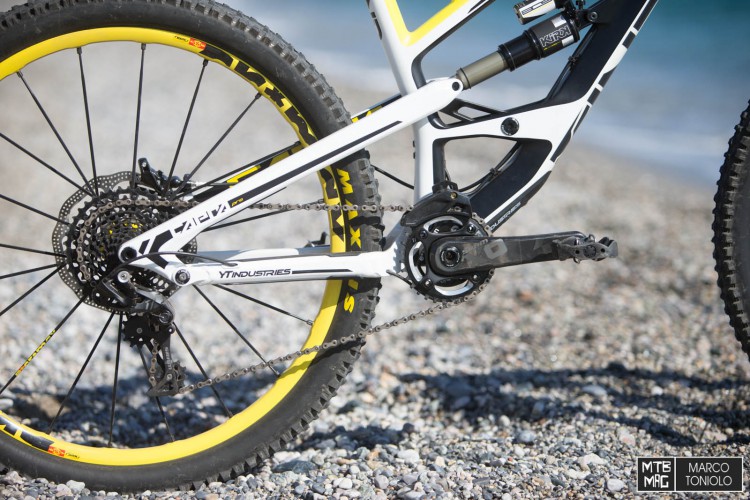 The wheels are Mavic Crossmax Enduro mounted with a 12mm DT swiss rear axle and a 20mm front axle. Also all the varying Mavic adapters, valves and keys are included in the box.

The Capra FC Pro should mounting the complete Mavic Crossmax Enduro wheelkit, with Crossmax Charge 2.4 tyre on the front and the Crossmax Roam XL 2.2 tyre on the rear. YT sent us a Capra with Maxxis High Roller II 2.4 EXO on front and rear, mounted with tubes, that we have removed to turn them in a Tubeless system, using the Mavic UST valve and liquid sealant. 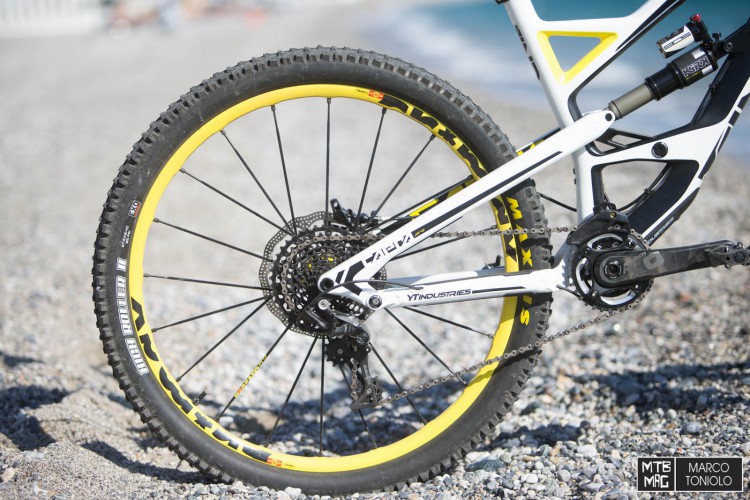 The headset is tapered and integrated, produced by Acros. The 780mm wide per 30mm rise Renthal Fatbar with the 40mm Renthal Duo stem is an aggressive DH set-up. 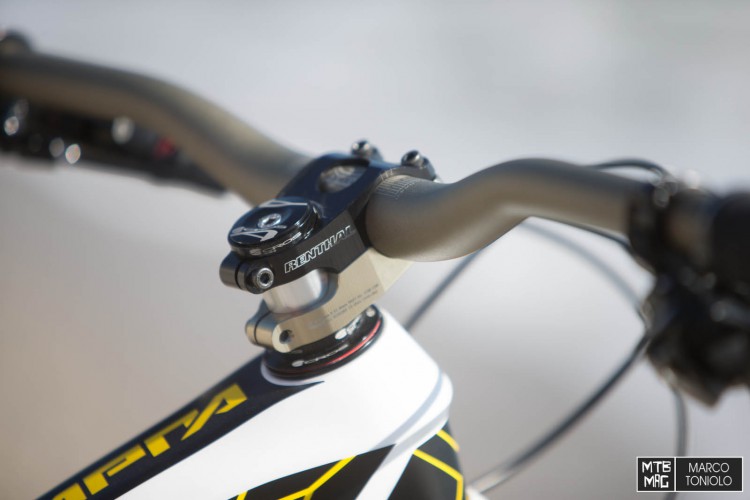 The brakes are Avid XO Trail with 200mm rotors on the front and rear wheel, for an oversized braking power. Thanks to the Matchmaker mounts, the handlebar looks clear, holding togheter the shifter and the remote for the Reverb Stealth seatpost with the right brake lever. Where is possible we prefer the seat post control on the left, so we moved it to the left Matchmaker. 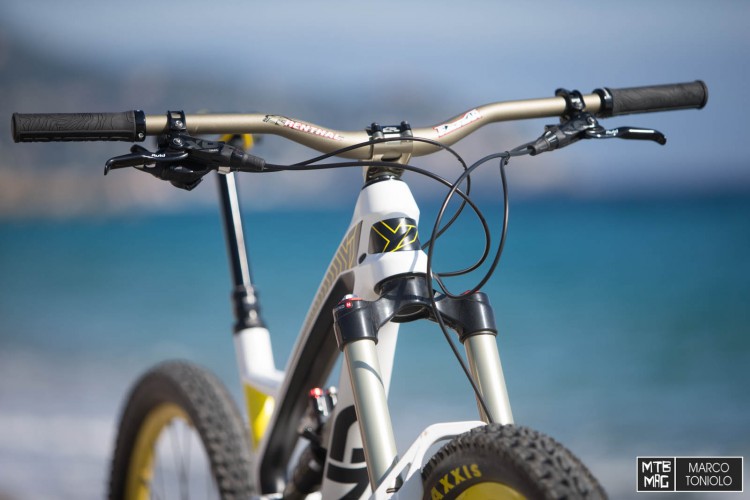 The Rock Shox Reverb Stealth seatpost has 150mm of travel, for a great movement freedom in the downhill ride. The SDG Duster saddle has titanium rails and matches the colour scheme of the bike, with brand and model name printed on it. A high level of attention to details is present across the whole bike. 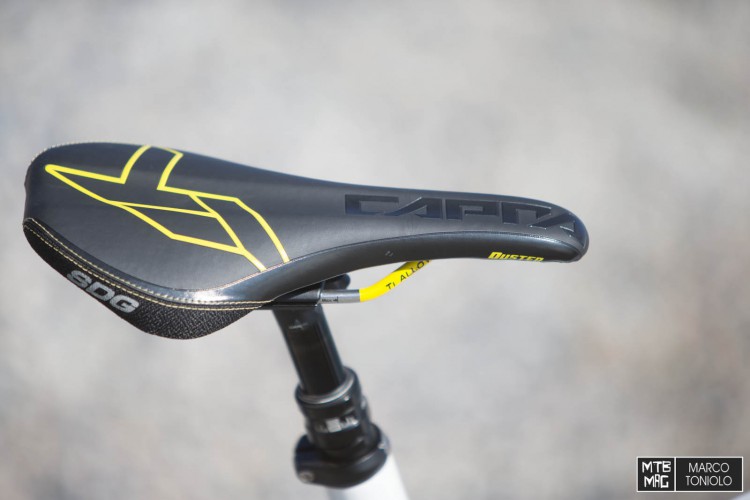 For an easier access, due to the race soul of the Capra, all the cables are external except for the ending part of the seat post control cable, that passes inside the seat tube of the frame. The cable routing is discreet and follows the frame lines in harmony. Only the gear change cable passes inside the frame and the chainstay. 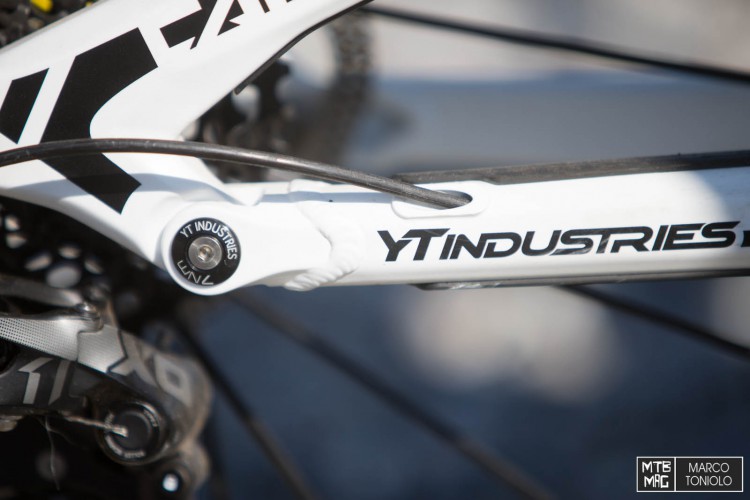 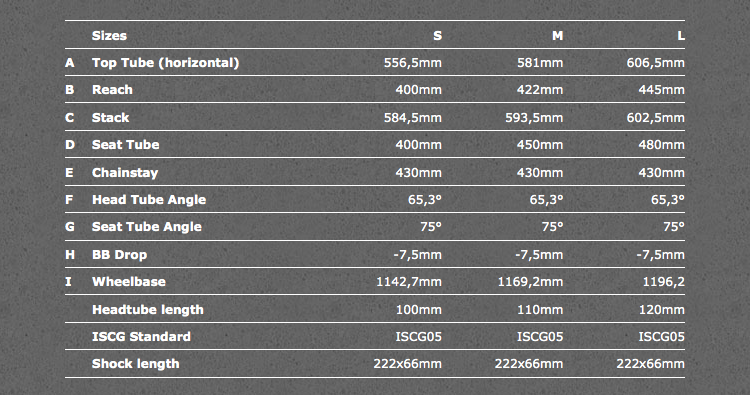 As we have said the Capra is aimed at going downhill. YT engineers have found the way to balance this with climbing efficiency. It flows well on climbs, also over a big vertical drop. The low weight of the bike helps on long distance pedalling, thanks to the pretty light wheelset, while the suspension system reduces energy waste in the pedal strokes as much as possible.

The steeper the climbs the more it is noticeable that the Capra reaches its limit ascribable to its geometries. The riding position is compact and the rider assumes an upright position with wide arms position, due to the 780mm wide handlebar. The low bottom bracket results in it being marginally harder to ride in technical sections in combination with the open head angle.

Anyway we can define the Capra a good climber considering its target of use: mainly the fluent climbs to get to the top of the Enduro trails instead of the technical trails. If you’re looking for a bike capable to give you satisfaction in downhill, well then the Capra is surely a strong candidate. It is stable and has the riding precision of a DH bike, with the light weight advantages of an Enduro bike.

The rear suspension keeps the rear wheel in constant contact with the ground in all types of trail conditions, including rough and smooth. The fork is a strong point of the bike, making the ride feel stable and safe with precise steering controls especially in critical conditions where it is rough and steep. The long wheel base also gives accentuated stability but remains agile as the front centre is compact. The weight distribution is a bit rearward. This means the rider needs to adjust body position slightly forward to help balance during the jumps or in those riding situations where he needs to lighten the rear wheel. 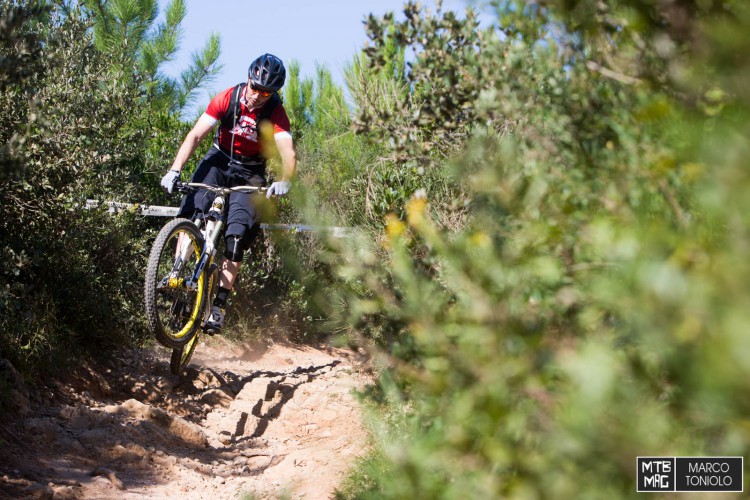 The component choices lead to a performance bike. Powerful brakes with 200mm rotors let to brake at the last moment. The lightweight and stiff wheels increase the precision of line choice and allow an excellent pedal sprint in combination with the great grip given by the suspension system. The wide handlebar gives stability at high speed but less precision in tight sections combined with the long wheel base. Similar to a DH bike, the Capra is always looking for speed and is agile when going fast, which can be reduced if speed is not maintained. Great finishes, top components, descend orientated geometry and excellent suspension. It’s a great bike for those that like to go fast downhill without loosing out on pedalling up. This is perfectly in line with the modern Enduro concept where the climbs are about transfers between one stage and another. The Capra is not for those who love trail riding using an Enduro bike. Let’s ride the Capra in the bike park, let’s race with the Capra, but don’t ride the Capra in the restful rides… this Capra eats speed!

Declared weight for the YT Capra CF Pro in M size is 12,9kg. We measured the Capra CF Pro that YT sent us in 13,4kg (with different tyres), this dropped to 13kg after switching to a Tubeless system.