[ad3]
Since 27.5″ wheels were introduced to the DH world, it would be an understatement to say that we’ve been curious about them and have wanted to run a side by side test compared to 26″ from the get go. When it comes to conducting proper testing, comparisons are often made poorly. For example, it would be neither fair nor accurate to test one bike with 27.5″ wheels versus a completely different bike rolling on 26″ wheels. Enter the 2015 Scott Gambler : from the ground up, it was designed to work perfectly with either wheel size, making it completely unique and in its own class in the downhill world. As you may have already gathered, we’ve spent a great deal of time on the Gambler with both 26″ and 27.5″ wheels.

Since October we’ve been spending the majority of our chairlift or shuttle assisted days aboard the 2015 Gambler. This has afforded us quite a bit of time on both wheel sizes. Admittedly, we’ve been fond of the bike since its first major facelift a few years back after some input from Brendan Fairclough. Super short chainstays, burly no-fuss hardware, low leverage ratio and a somewhat high pivot made this bike a stout but snappy plow that tackled the worst of terrain with ease.

Last year, designer Tim Stevens made some updates to the Gambler which may seem subtle aesthetically, but have proven to make quite an impact. Let’s go over some of them…

First and foremost, the bike was made to work with either wheel size. This isn’t easy. If it was, everyone would be doing it. With an adjustable BB height and chainstay length, plus a headset system that gives you +/-4 degrees of head angle adjustment, the bike is off to a good start in terms of covering the bases for riders of all skill levels. What’s extra impressive is that those adjustments aren’t just utilized to make room for big wheels, or shorten things up for smaller wheels – they’re optimized for both. For instance, in the short chainstay setting, a 27.5″ wheel has tons of room for mud clearance and still sits at a freakishly short 421mm(16.57″)…perhaps the shortest on the market. Some riders do flatspin 360’s on 60 foot jumps(26″) on this bike while others get top ten results on it at world cups(27.5″).

OK, you get the point – it’s versatile and in a league of its own. We’ll stop droning on about all the options the Gambler offers. What we’re trying to convey is that because this is the only bike on the market that is designed from the ground up to ride well with both wheel size we can draw a direct comparison between 26″ and 27.5″ without a skewed apples and oranges comparison.

To start off we got comfortable on the bike with what we were most familiar with – 26″ wheels. How did it do? Great. To be honest we had no major complaints. We do wish that we could have gotten the bottom bracket up slightly. Even in the high position it came in at a super low 12.9″, but in turn – it was a beast in the corners so long as you minded your pedal position.

With our 26″ wheels and BB in the high setting, we initially opted for the -1 degree cups and settled into a 62.7 degree head angle. After speaking with Scott employee and ripper himself Ben Walker, he suggested we try the 27.5″ lowers on our RockShox Boxxer. The added height for to make room for the bigger wheel helps get the BB up slightly. We decided, why not? We installed the new lowers – by the way, RockShox achieve their different offset via lowers and Fox do so via different crowns. After installing them we immediately felt the bike was a bit too slack and opted to go to the 0 degree headset cups. Big improvement overall. The bike seemed to track better and the steering became more precise. It was also nice to not fret as much about pedal placement. All in all, at this point it was the best setup we’ve ever ridden with 26″ wheels. Let’s see how it did once we installed the big wheels.

Here is one of the last videos we made with 26″ wheels. Channeling our inner Aaron Gwin we flailed down a local DH track with no chain…Thanks to John Keep for the follow cam.

For our build, basically all of our parts remained the same. We even ran the same Magic Mary tires from Schwalbe to keep everything copacetic. With all of the initial resistance to the big wheels from the gravity crowd, we were skeptical as to whether they would corner as well. In terms of preconceived notions, we knew they would impress us with their added roll over ability, and would help smooth out some of the braking bumps and chatter. We also had a feeling that they might help provide some added traction and braking power with the larger contact patch as well…

Immediately on our first run we were surprisingly “at-home”. Perhaps it was the perfect conditions on a track we’re comfortable on? The new wheels weren’t nearly as disruptive as we thought they would. 6 solid months spent on 26″ and halfway down the trail we were mind blown. Traction through the roof, cornering was in fact better. Yes better…Particularly the long, drawn out turns and the off camber bits – likely due to the added traction. We’ve yet to encounter a turn, no matter how tight or how tricky that wasn’t handled better on 27.5″.

OK, so it corners better than expected, but that’s not it. Because of the better roll over and the fact that a great deal of small bumps vanished underneath the big wheels. We saw that coming though. However, this prompted us to tinker with our suspension and a bit more ramp and pop to it, thus giving the bike a more lively and playful feel. You see, with the smaller wheels we had to set the suspension up a bit softer to eat up the small chatter. On steep lips, that softer setup was less than ideal and it was difficult to dial the bike in to eat everything up, yet still jump nicely.

One of our first runs on the 27.5″ wheels on a track we’re quite familiar with. As you can see from the melted snow, conditions were favorable. Thanks to Luca Cometti for the follow cam.

At this point, most of us know that it’s not even questionable anymore – on downhill bikes, 27.5″ wheels are faster. Josh Bryceland was the last person to win on 26″ wheels last year and surely it will stay that way. The only riders who will truly benefit from 26″ these days are the ones who are flipping and spinning DH bikes. That does not apply to 98% of riders out there. Also, some really short riders may prefer the smaller wheels as well. Stutter bumps, baby heads, whoops, corners, off cambers, you name it. It was all better on 27.5″ To our surprise, we found benefits where we expected to find potential shortcomings – we even found it jumped better because of how it allowed us to tune our suspension. Notably, hats off to Scott for making such a versatile bike that works for their world cup race guys as well as the savages that are flipping them off of cliffs at Rampage. It also served as the one and only bike that we could accurately conduct this test with so it was a bonus that we could geek out so long on this project.

Note : We grabbed our Gambler as a frame only, for an in depth look at Scott’s line of complete Gamblers click here. 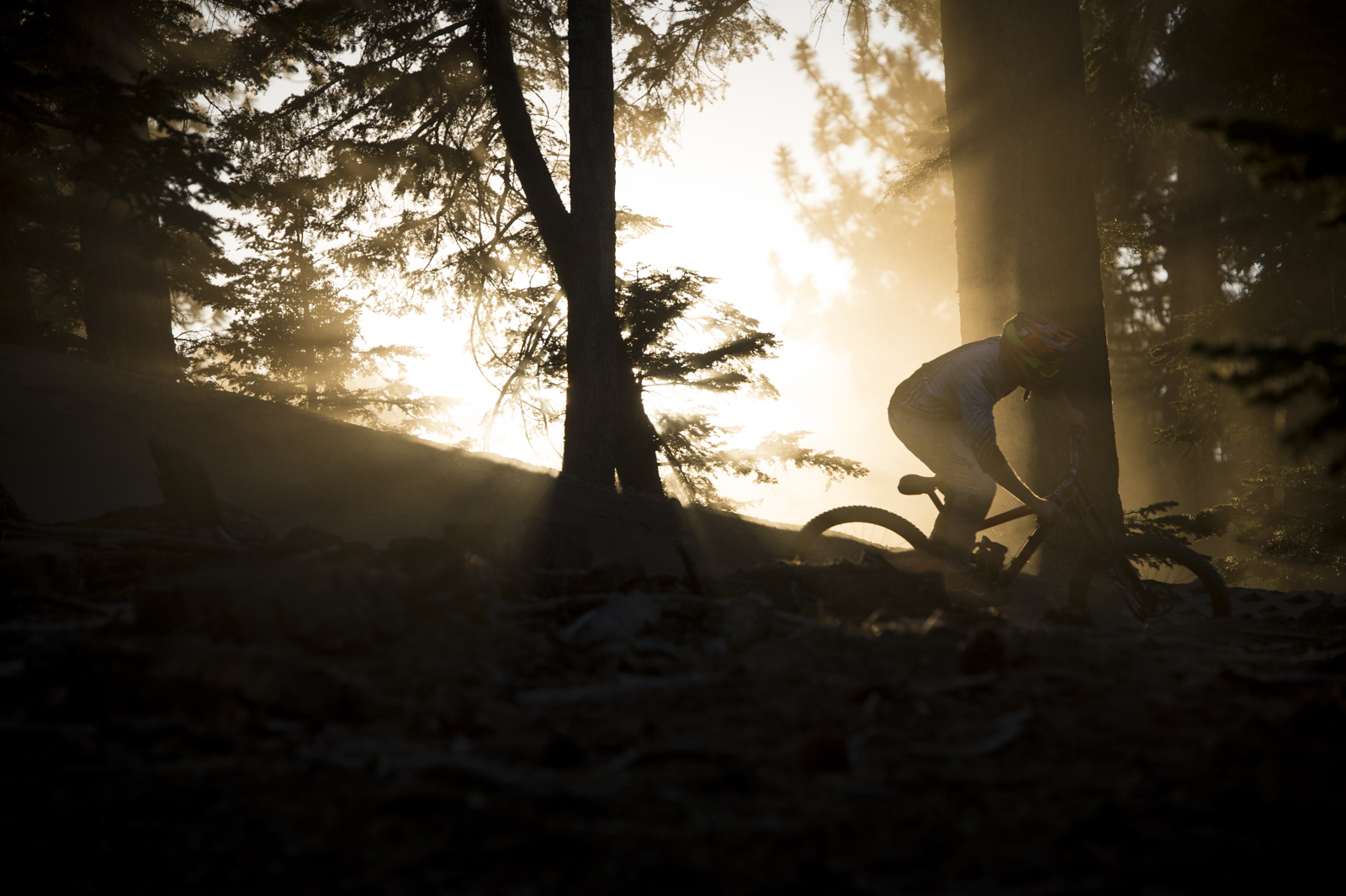