During the last eleven months there has been one staple in our test regime, our Cannondale Jekyll Carbon. We have mounted and tried a huge range of components and builds on the frame as we cycle through what the market has to offer. After this we are confident we know how the Jekyll rides and what follows is our opinion on a bike clearly built on racing by the first Enduro World Series champion Jerome Clementz. 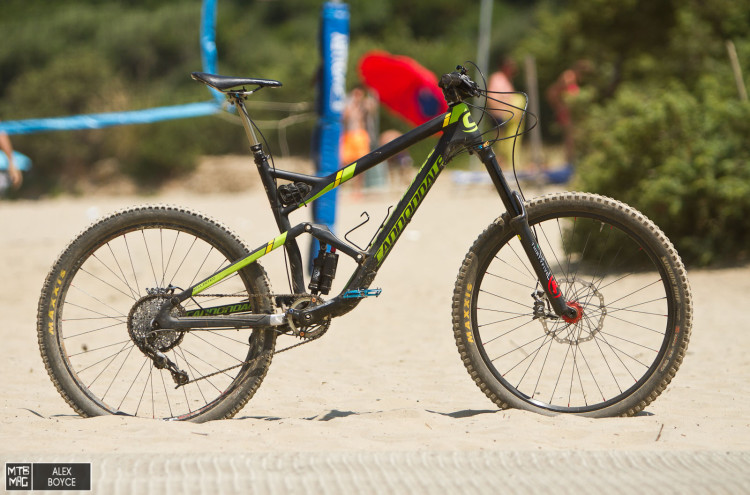 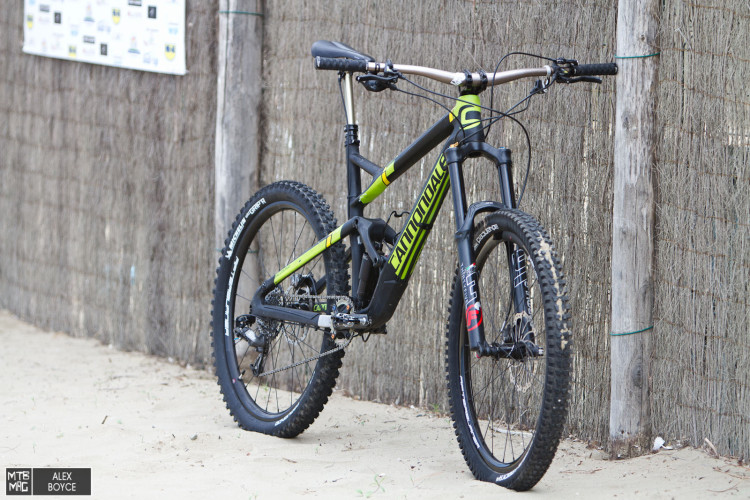 The large size Jekyll frame and Fox DYAD shock that was sent to us to test by Cannondale were the only parts supplied. The reasoning behind this was simple, it was about striping away all the other factors and concentrating for 1 year on the core.

The Jekyll’s numbers are race inspired, the longish top tube is all about stability. The head angle and seat tube angles are meant for an inspired ride pointed down, while still being somewhat effective on the short punches and the long climbs. What we have here on paper is a bike that should be able to do it all. Sizing runs relatively large compared to the general bike market. 183cm riders fit a large frame well. There is plenty of space in the cockpit to shift the weight forward over the front end.

This is exactly what an Enduro racer wants, speed, stability and ride-ability on the way to the top. The dual travel option though also introduces something else. The four bar rear suspension is about responsiveness. The head-tube size increases stiffness and the numbers above have a broad appeal.

We built the Cannondale up over time with various components, however we settled on a few staples for the type of riding we found our selves doing. 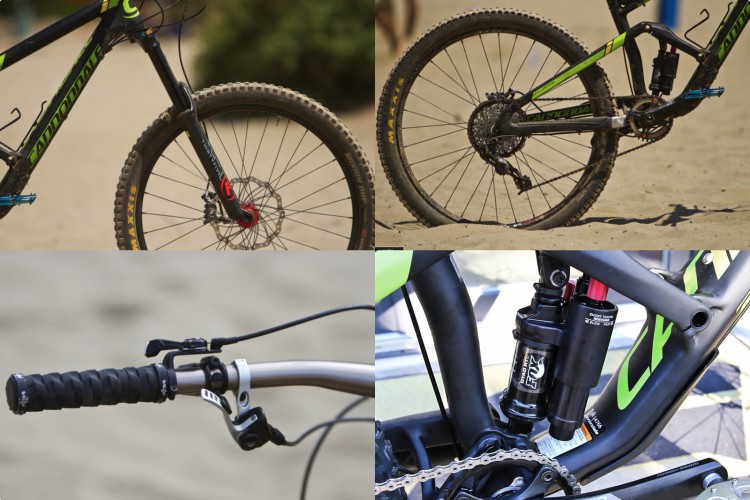 Our end choice of fork was the Formula 35 180EX set to 170mm travel mode.  We set the suspension lockout control on the left above the bar with the setting: hit the button to release the suspension, pull towards to lock out. After different combinations this was our preferred set-up, remember Jerome Clementz uses an adapted Gripshift to control his.

The rear shock setup was rarely touched over the time on the bike. We set sag to 30 percent then left it as that, we followed the recommendations of Jerome, with the dual travel we actually found we needed to fiddle less with suspension set-up.  Yes, we played with different rebound speeds, but we stayed in the middle settings most of the time, which worked great. Every now and then we checked pressures, they remained constant. 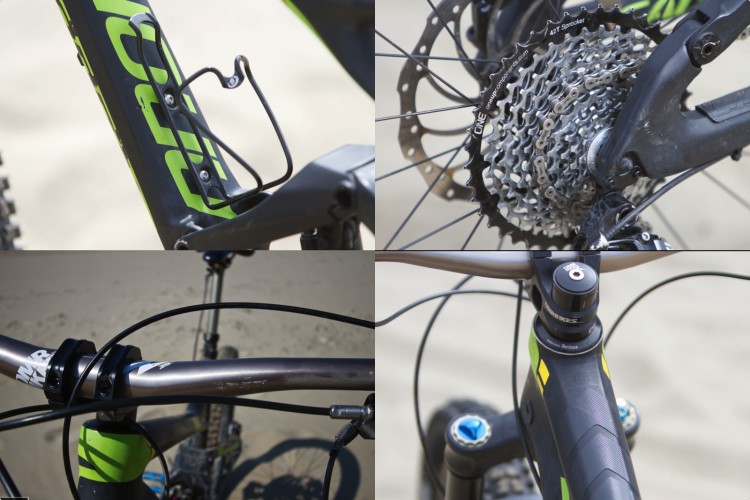 Our other components were a 1 x 10 mix and match drive train with affordable Sram X9 components, Renthal narrow/wide ring and an One-UP 42T rear cog. We used a 1.5-1-1/8th headset and a 35mm stem with 800mm bar.  We found that the bike was ideal for carrying a water bottle and taping a spare tube to the frame.  Added some frame guards from AMS protected the frame well and a FOX dropper post kept us in the right position at all times. We tried many different wheel types, but most enjoyed using fairly normal rim widths mated with Michelin tyres which rolled fast and provided plenty of grip all around.

Punta Ala Trail Center has been the focus of our test riding, an Enduro/Trail location which has a huge variety of trail types to ride on. We also rode a few DH tracks, some long, all mountain descents with big climbs in the mix. We pretty much rode every type of weather condition out there. It was about fun and testing the bike in as many different ways as possible. 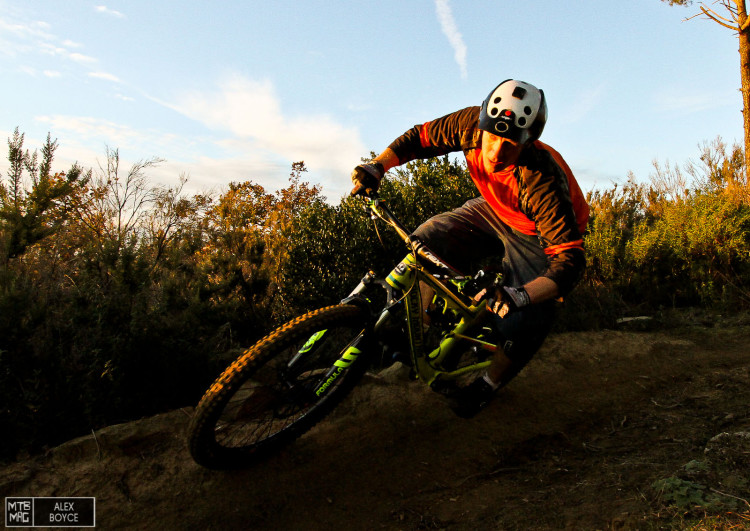 The Jekyll is a fast stable bike that feels well balanced and sticks to corners without feeling sluggish, there are snappier bikes in corners but they are more nervous when its rough.  You can feel the its ability to flow over the rough stuff, with the rear suspension tracking well and keeping tyres in contact where it matters.

The head angle is right for all day riding with hard descents thrown in. You never once feel there is a lack of anything when it comes to difficult tech sections. This bike likes to go fast, with its planted cornering ability and good well struck balance.  It was easy to find a comfortable centralised body position in all conditions. The roomy top tube gives a great deal of confidence to the rider. 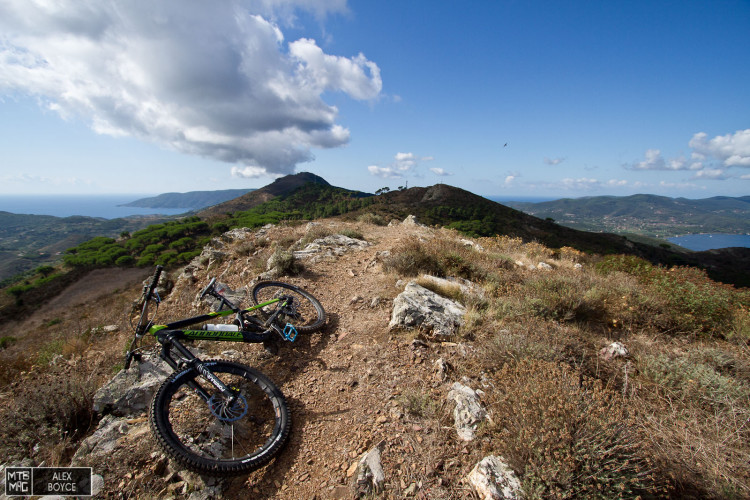 The Jekyll is a great bike for climbing, switched into 90mm mode and you feel like you can climb all day efficiently. Uphill in corners the bike remains stable and you don’t feel like you are pushing a bike with too open of a head angle, and it didn’t become unstable mid-corner. The joy of being able to lockout the suspension is really great, especially when you hit a climb mid descent. It keeps you from wasting energy and the bike just rolls and snaps over the short inclines with more speed. Enduro racing is what this bike was designed around. Rough sections on the way down are eaten up with ease with the 160mm of rear travel. Jumps are coped with well and after playing with various forks the 170mm fork travel option is something we like and gave us an edge when it came to the bike absorbing steep gradients yet still being efficient.  The frame is stiff and robust when it gets rough. Having a solid performing fork on the front of a stiff carbon frame is essential, and we were quite happy with the Formula that we chose.

The rear suspension should be used in 160mm mode once the bike is pointed downhill, especially on aggressive descents. The linkage is supple and active, yet does not kick back with any harshness. We never once felt like we ran out of travel, but we found the Jeckyl had a fairly linear feeling for the majority of the travel yet provided some ramp at the end of the stroke.

Many people worry about a shock like the DYAD, thinking it looks complicated, but honestly it was easy to set-up and use. We experienced zero problems and it turned out to be very reliable in all weather conditions. We did play with the pressure settings but always rolled them back to Cannondale’s baseline out of the box recommendations, which handle just about everything you could ride really well. We used 25-30 percent sag most of the time. We worried less about lower sag percentages as we had the lockout option for pedaling uphill in 90mm mode. If your riding takes in a mix of smooth trail riding as well as more aggressive trails, then the 90mm rear travel option is pretty clever. We found we could blast along trails where a 120 mm bike would be fun on. It’s possible to pedal along at a fair clip without wasting energy.There aren’t many long travel bikes that can do that.   It’s usually a compromise between up and down with most frame designs and weight. The 90mm travel option opens up what is possible. With the Jekyll you can do all with very little worry. We loved the ability to tighten things up as we found ourselves having to put more energy in when trails got steeper or flatter. The resilient and precise feeling that the a carbon frame gives the rider is always a bonus. 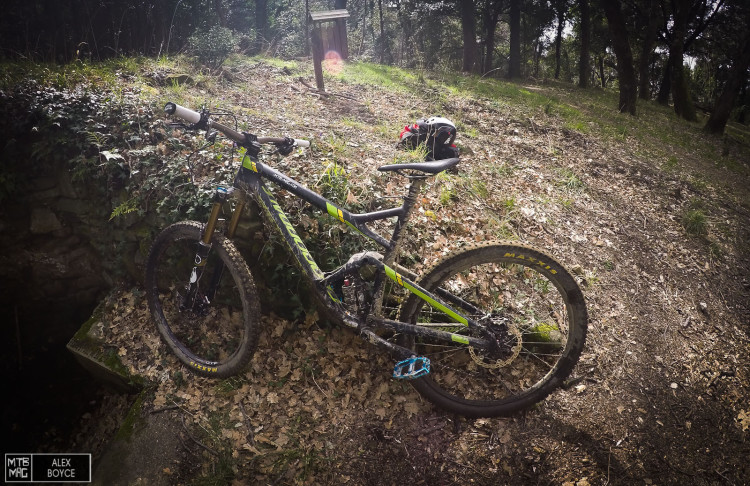 The longevity/performance of frame and wear on frame and shock was within what would be expected over time. We found the pivots remained smooth with no play over the eleven months onboard. We were riding at least 3 times a week on average in dirty conditions. Proper maintenance is needed though, after a dusty period of riding we had quite a few squeaks, so we dismantled the rear end and cleaned everything up.  All the squeaks went away and the rear end worked and sounded great.

The Jekyll was meant to be an Enduro race bike. It can ride up all day and descend like a champ as well. It has one world title under its belt. Jerome Clementz’s riding style is in a word fast, his tool to do it on is efficient and capable. The ability to shorthen the suspension and ride uphill then down, then relaunch smoothly where there is a steep bit in a trail is golden. After spending so much time on the Jekyll and comparing it against the competition, we always found ourselves thinking that a dual travel system should be the norm on Enduro bikes. It makes sense, Enduro is an all round bike sport, therefore an all round bike is certainly advantageous in many ways. We don’t really want to pedal a soggy bike up the hill. The climbs look a bit less difficult when you know you can pedal efficiently.

The Jekyll is a fun, fast bike that is pretty much a do it all bike. That is a difficult task to achieve with the riders of today and their current demands. If you want to be gentle or go extreme you know that whatever you do you have the right tool for the job if you are riding the Jekyll.