Over the last few months, I’ve been spending some time on the 27.5″ wheeled long travel Canyon Torque:On 8. The particular model that I’ve been testing varies substantially compared to the US version that’s available to the public, due to different specs. However, it shares the same of the aluminum frame, motor, battery and in house bits such as the cockpit.

For the bulk of this test I’ll be primarily focused on ride characteristics such as handling and duty as well as battery/power delivery. There isn’t much sense getting too far into the weeds over the details of components since they aren’t the same on the actual bike available to consumers, but we can definitely cover some ground on overall ride quality and value… 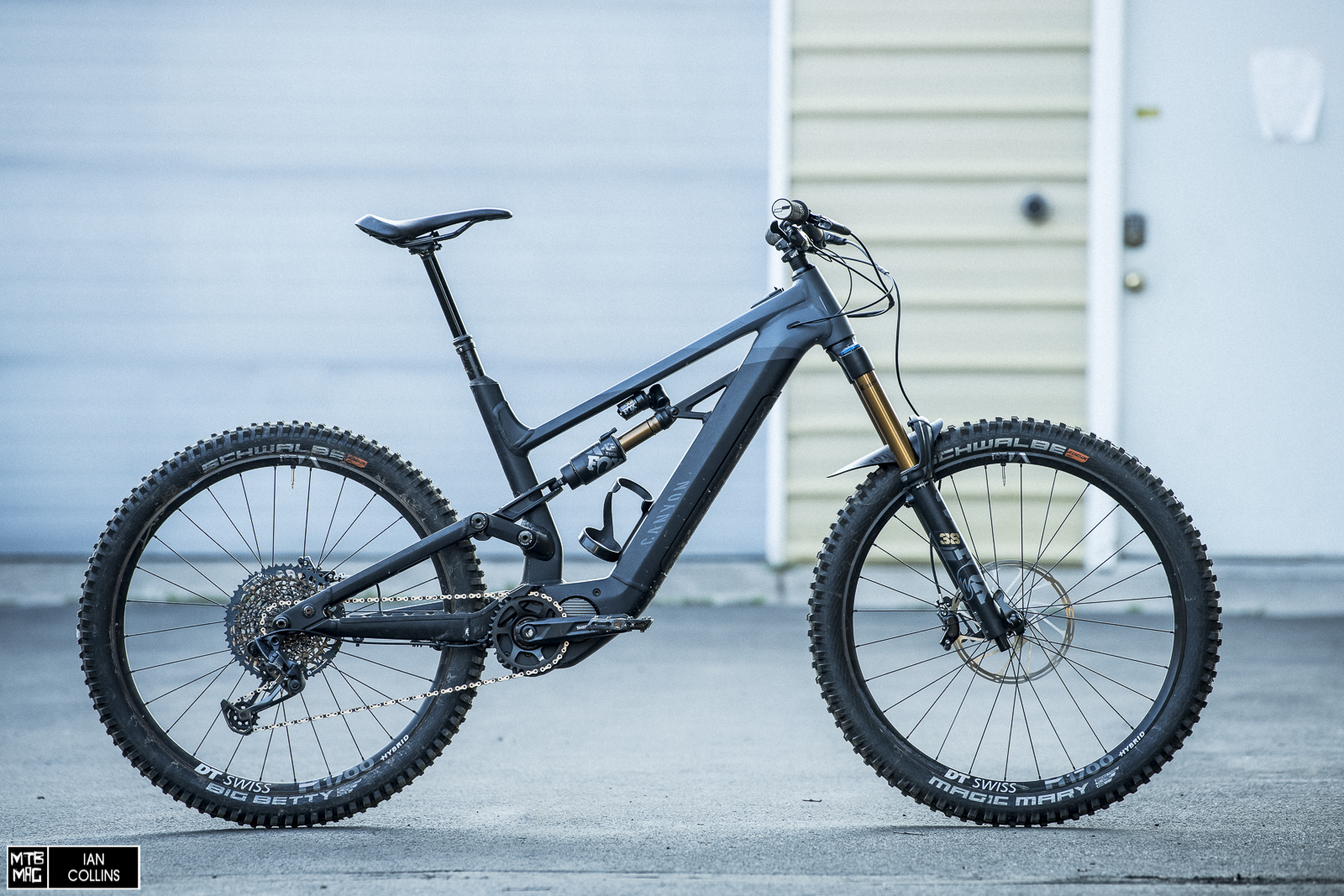 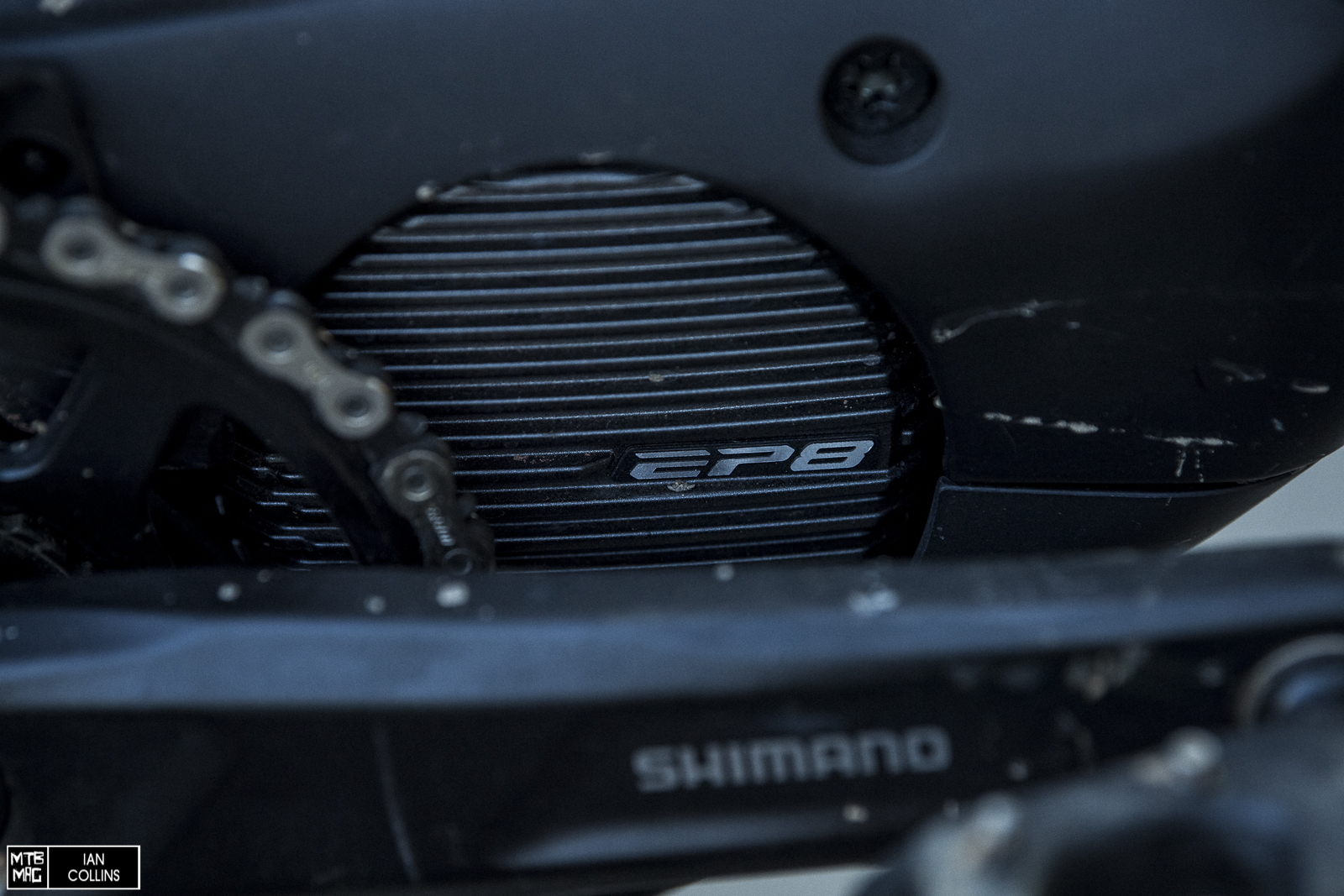 The Canyon Torque:ON utilizes a Shimano Steps EP8 motor with a somewhat smaller 504 Wh battery. For reference, full sized batteries run more to the tune of ~700 Wh. With that in mind, it does feature full power with 85Nm of torque. 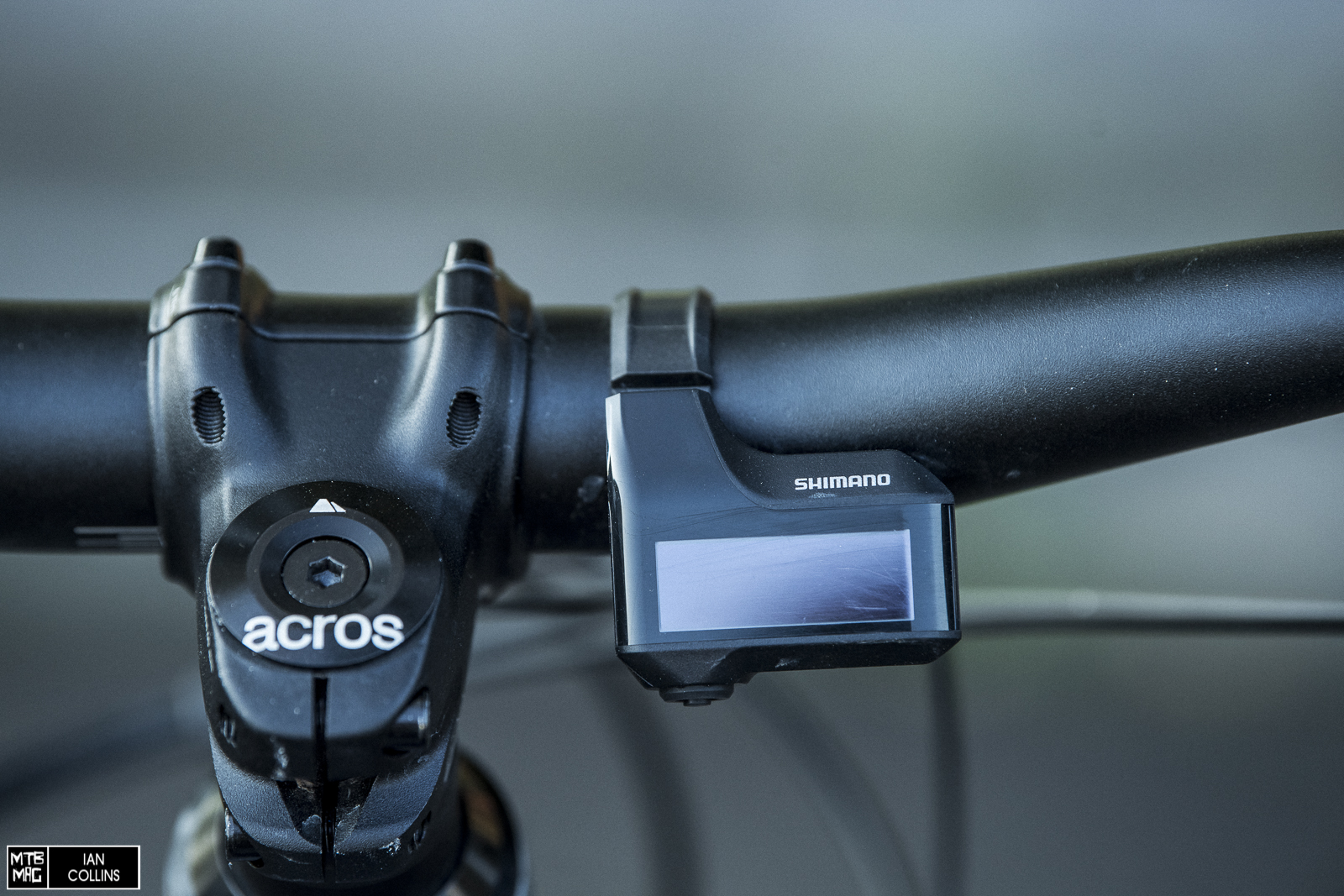 The Steps display is straightforward and easy to use/reference. While simple and streamlined displays that are more integrated seem to be becoming the norm, I appreciate that it’s bar mounted, yet is still out of the way. If you have to flip the bike upside down, it stays out of harms way. 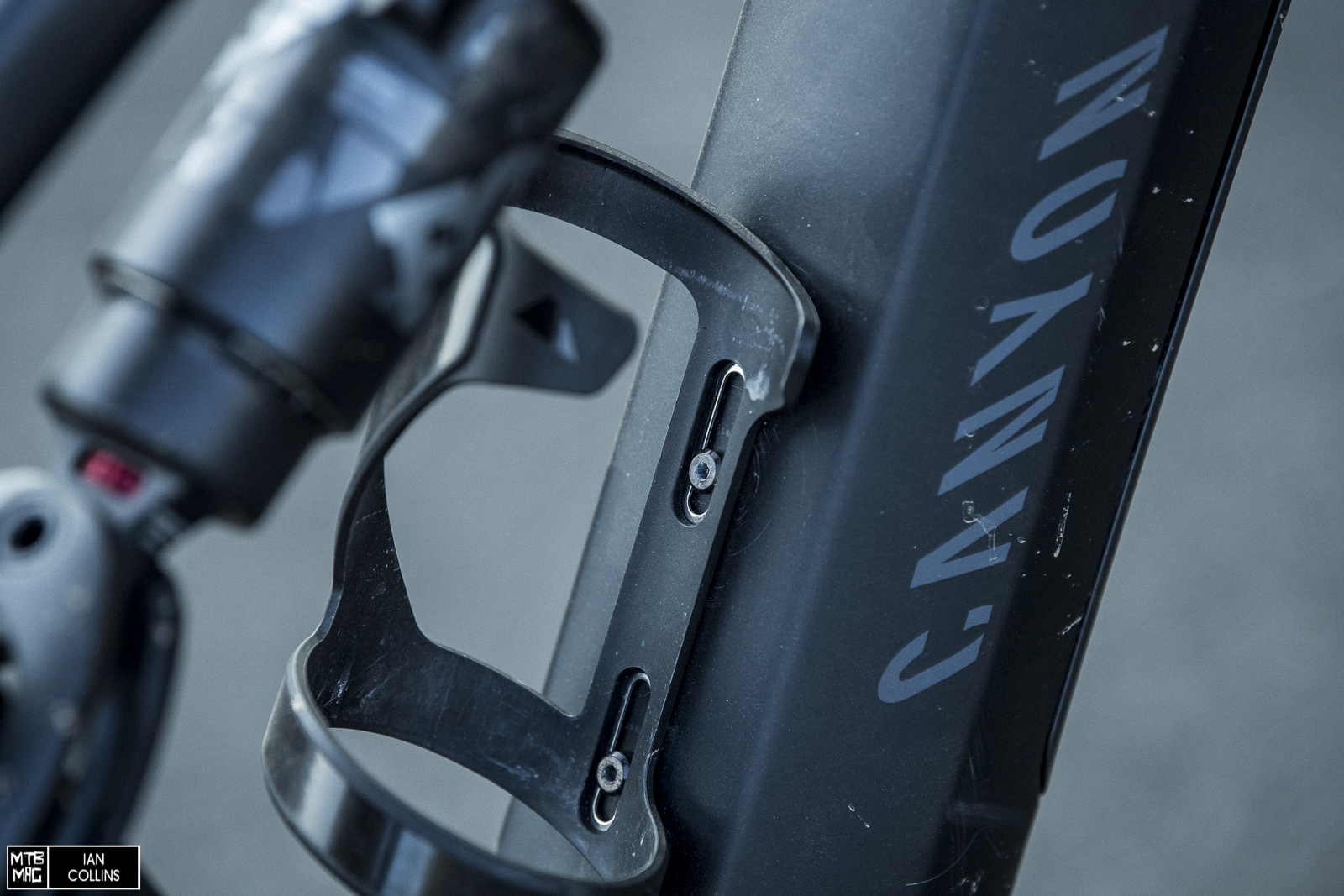 Things are a little tight inside the main frame, but that didn’t stop Canyon from negotiating space for a water bottle. They designed their own bottle and cage which is a little wider and flatter, yet still fits a full 600ml of liquid. 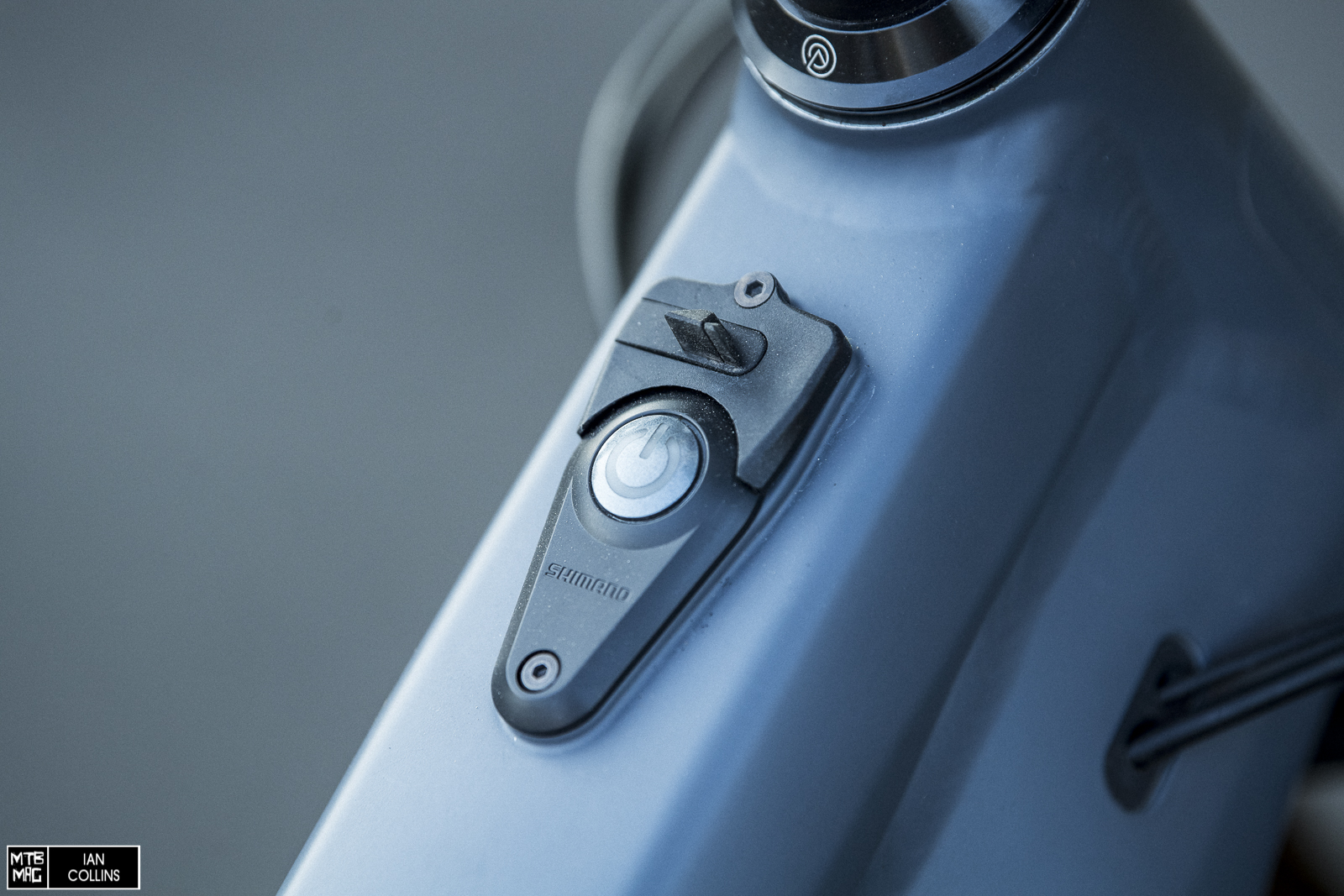 The power button is front and center on the top tube, and it also features a USB-C port, so you could charge things like a light, headphones or your smart phone, should you want to in a pinch. 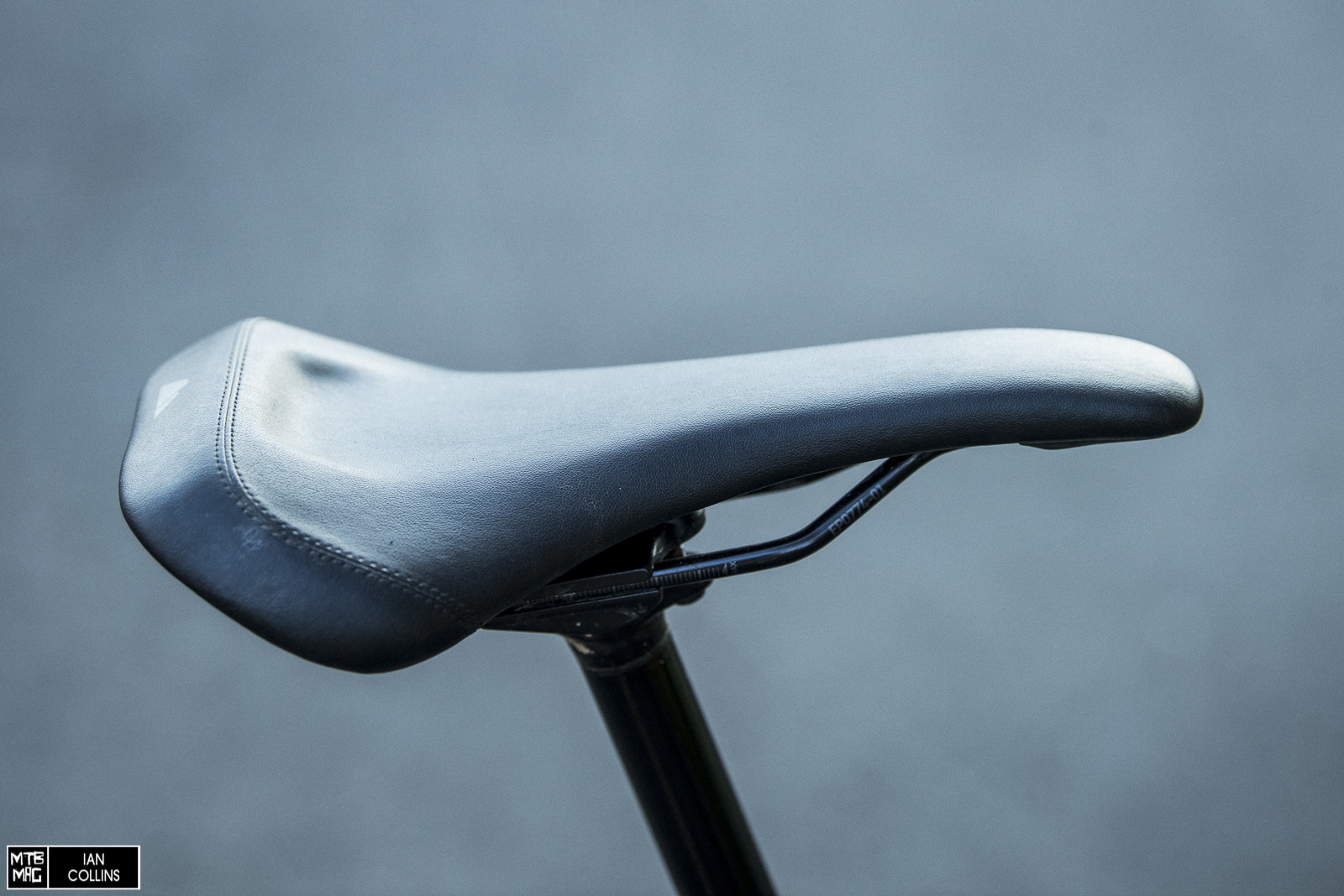 Canyon has an in-house saddle that’s designed specifically with e-bikes in mind. Typically stock cockpit parts don’t excite me very much, but this seat was quite cool. The curve at the rear was very helpful in keeping me from sliding off the back on steep climbs and the saddle remained comfortable front to back on long rides. 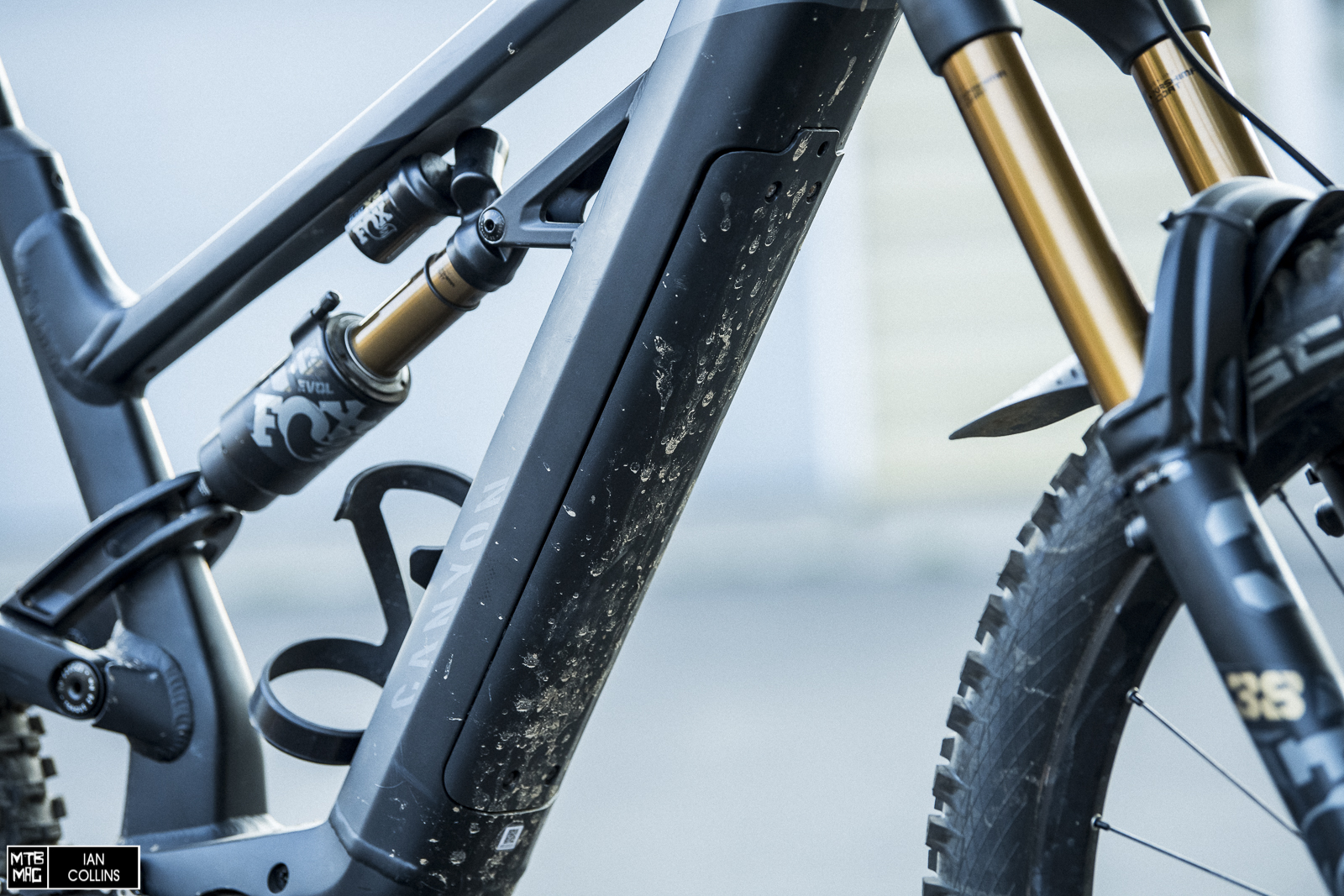 The downtube guard/battery casing can be removed with a few bits of hardware rather easily. 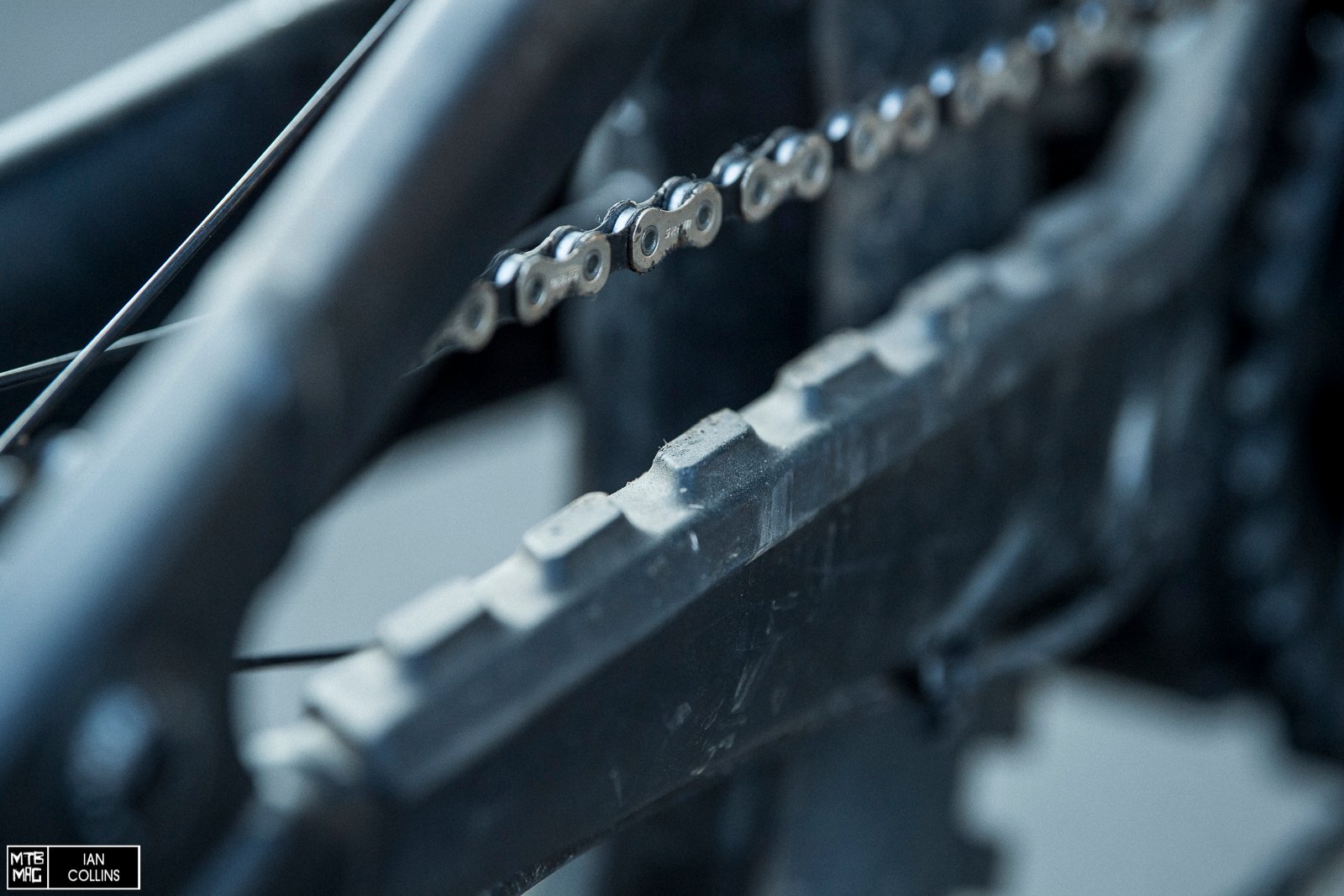 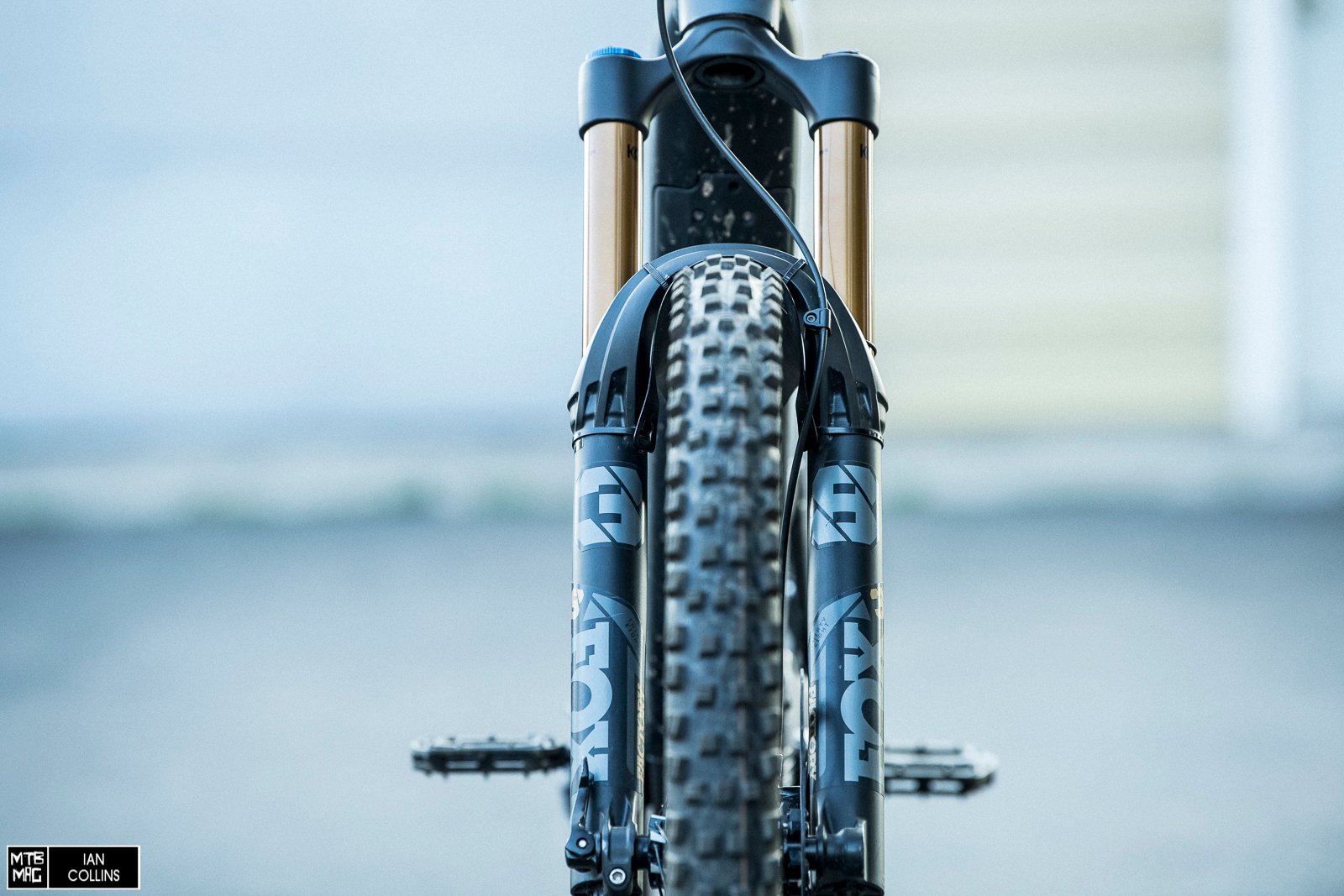 This sample in test features a flagship 180mm travel Fox 38 Factory RC4, as opposed to the more entry level RockShox Zeb R which comes on the US model. 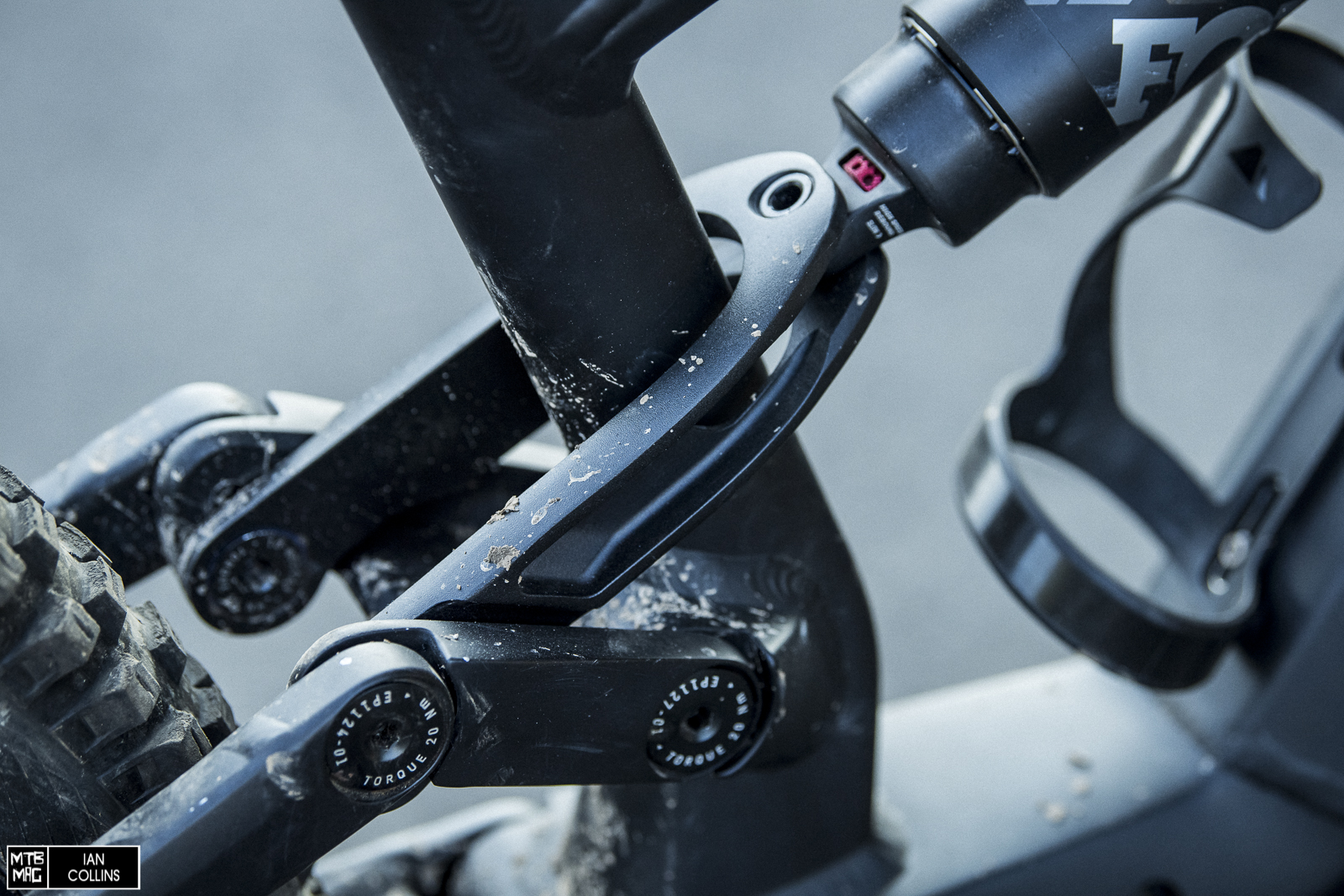 The Torque:On uses Canyon’s “Triple Phase Suspension”. In marketing speak, that translates roughly to a fairly even rate of progression throughout the travel. Which means, light off the top, supportive in the middle and resistant to harsh bottom outs. Also more high end than stock was the excellent Fox Float X2, which supplanted a more straightforward and less adjustable RockShox Super Deluxe Select which is standard on the US model. 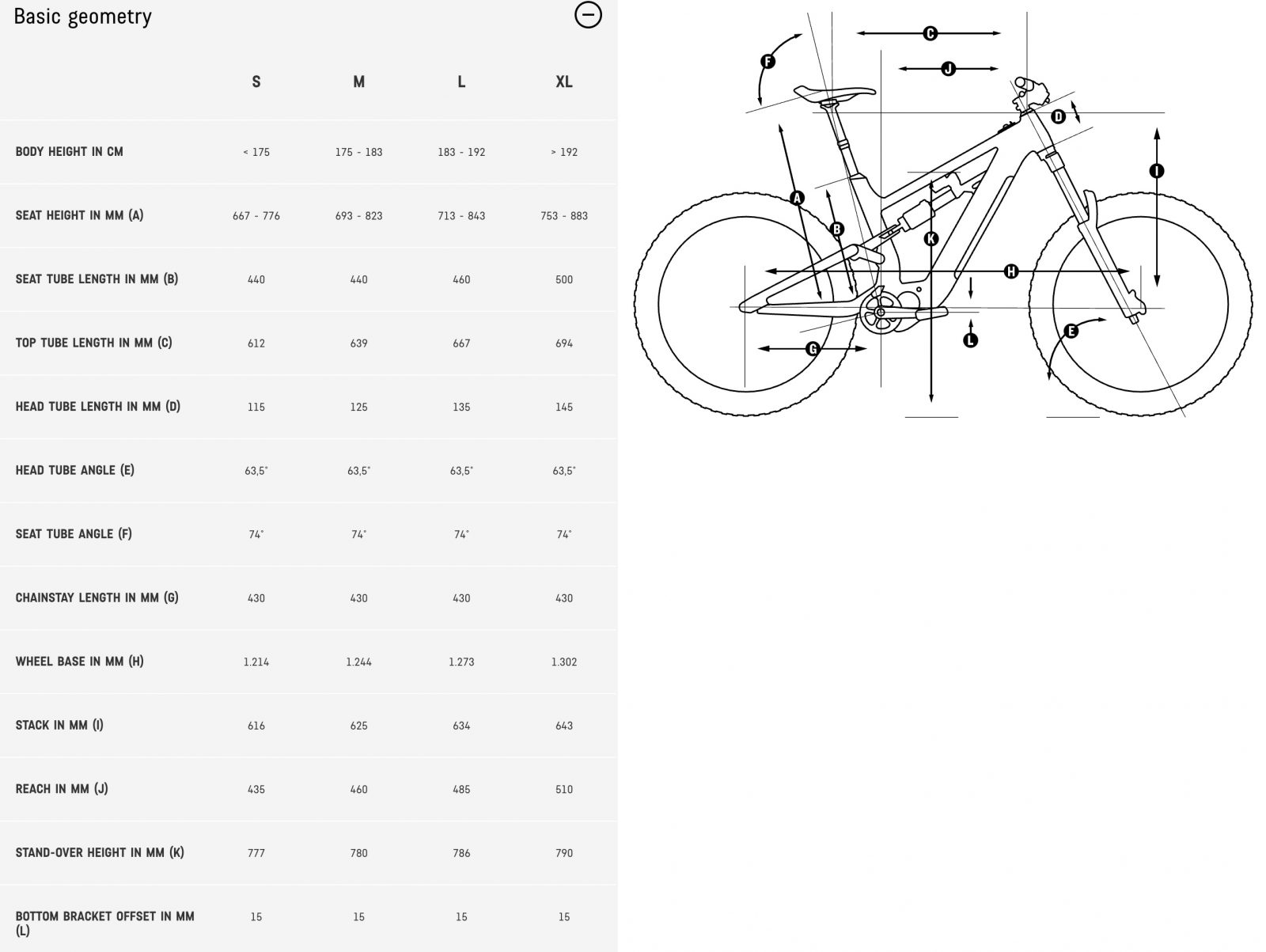 The Torque:On features a mix of geometry that’s both up to date and slightly off the back – literally and figuratively. The 485mm reach on my size Large, in combination with the 63.5º head angle offered an aggressive disposition up front. However, the lax 74º seat tube angle hasn’t quite caught up to where the industry has headed as of late. This meant that compared to bikes with steeper seat angles, it had a rearward bias that made it difficult to get my body weight shifted forward on tougher climbs. One factor that had both bad and good aspects was the very short 430mm chainstays. On one hand, they made the bike quick and responsive in the corners, and very easy to manual and jump – in fact, freakishly easy for an e-bike. On the other hand, it was a slight setback as regards stability at speed and in garnering traction without looping out on the steepest of climbs. Another mixed factor was the very low bottom bracket. While this helped it dig into corners and felt very much “locked in”, it also made it a little more difficult to keep spinning the pedals through climbs where clearance was needed.

As you may have seen in the video, it became pretty clear rather quickly that the Torque:On is aimed at the park/freeride crowd. Everything about it is tilted toward built trails consisting more of jumps and berms as opposed to conquering awkward janky tech on big alpine missions. With that in mind, I also think that the battery itself – and its smaller size – are also in line with “fun” riding as well. You could knock out 8-10 laps on ripping 2-3 minute long flowy jump trails with no problem powering up a fire road and hitting them over and over again. To me, it seems like it would be the perfect bike for the B&K trails on the Sunshine Coast. Hopefully what I’m saying doesn’t sound like I’m relegating it to a narrow segment of riding. That’s just how I’d personally idealize the Torque:On if it were mine. In reality, it’s still a highly capable machine with excellent suspension and plenty of it. As a side note, for a bike without a lockout, the Torque:On pedaled admirably and with very little feedback or bob. Regardless of your intentions, it’s still very confident in tackling rugged terrain. My main point is that it tilts toward the freeride end of the spectrum and less toward being a sprightly all rounder.

As far as spec is concerned, given that this bike is quite different than what’s available to consumers, let’s talk more about what is the same. On the topic of the cockpit, while the parts themselves all functioned nicely and were comfortable, sturdy, etc. they fell a little short in some areas. The dropper post offered smooth actuation and I really liked the feel of the lever, but my long legs prefer to see something closer to 170mm+ travel on size Large and XL models. Regarding the bar and stem, they both got the job done in a no frills fashion, but a full width 800mm handlebar would have been more appropriate for the aggressive category that this bike lands in. One sticking point is that the STEPS system requires that the wiring for the display run through a groove in the handlebar under the grip and then into a hole in the stem. While this makes for a tidy front end, it also becomes a limiting factor when it comes to choosing things like an aftermarket 50mm stem or a taller full width bar. As far as the motor is concerned, I like the Shimano Steps system. It delivers smooth power transfer without clunky uptake or drop-off, and best of all it’s quieter than some other systems out there. The display and control are simple and easy to use, without causing any distractions to your riding.  Another aspect that I appreciated was just how quiet the bike was overall.

Regarding what I rode, versus what is specced in terms of suspension, brakes and drivetrain there is no doubt that I rode nicer stuff. With that said, you can still eye up what Canyon chose for the consumer model and there is little doubt that it offers an extremely good value.

All in all, I’ve had a lot of fun on this bike. If you live somewhere with an abundance of nicely built DH/park style trails, but don’t have too many people to shuttle with, then it fits flawlessly in that niche section of the market, yet will still deliver and then some to wider areas of interest as well. All in all, the Torque:On is a great bike but some geometry tweaks could broaden its horizons and make it even better. I have a sneaking suspicion the next version will have a steeper seat tube angle and mixed wheels, helping it better sprawl across categories, but at present this current version is best summed up as the most “Freeride” e-bike out there.