When we first laid eyes on the new Crank Brothers Highline seatpost back at Sea Otter, we were super impressed with how well the brand re-imagined their vision of a dropper post.  The Laguna Beach brand had major struggles with past efforts; it seemed they were trying to re-invent the wheel rather than just produce a cut and dry, utilitarian offering.  With the Highline they got back to basics but added simple but smart features, a couple of which are industry firsts.  Follow along below to see how the seatpost has worked out for us over the last few months. 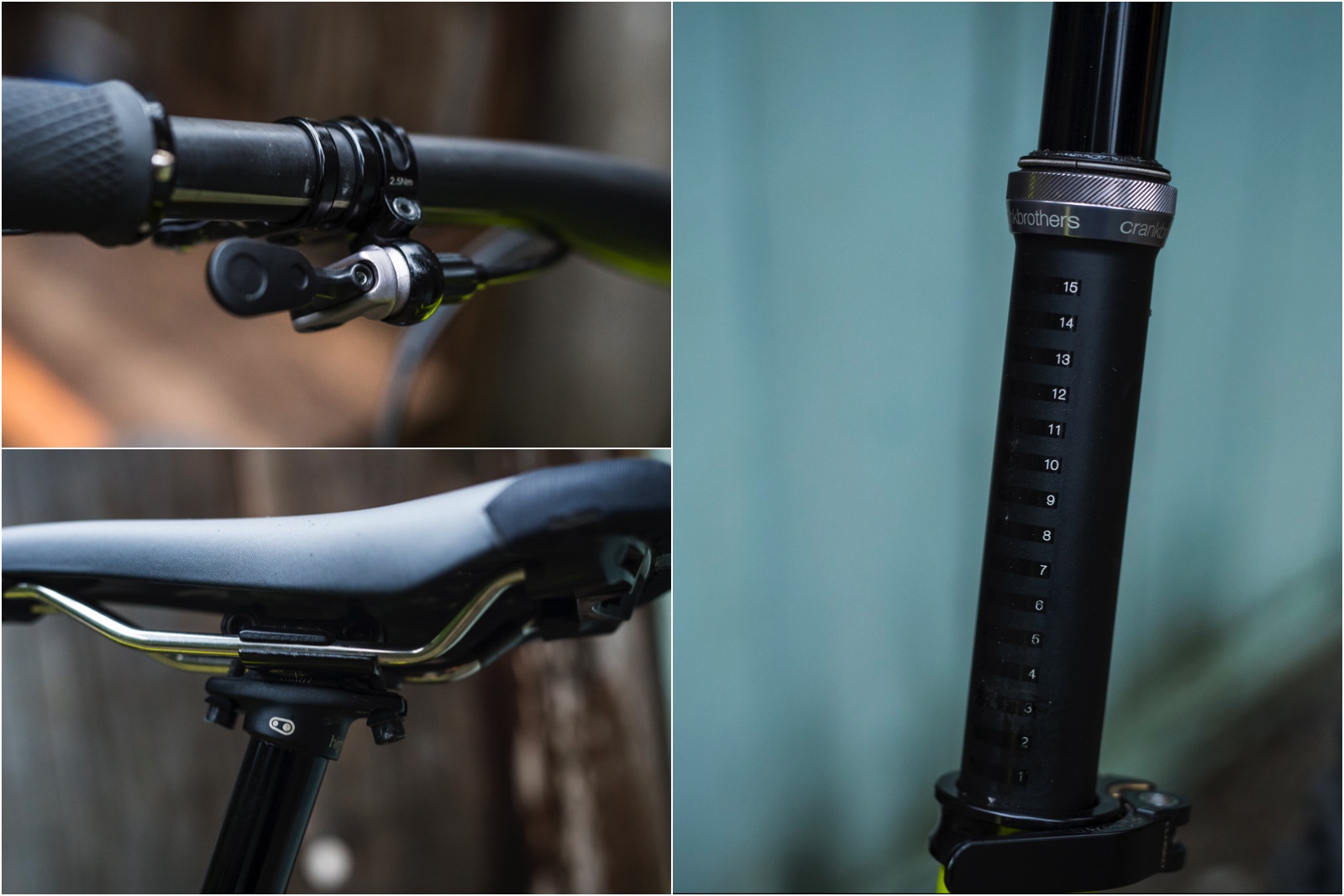 Now that manufacturers have conducted a few years of experimenting, dropper seatposts should be super easy to install…and remove!  They seem to be getting more refined these days and the Highline was actually a breeze to work with.  Its cable actuated and sprung with a cartridge that has a factory set pressure so unfortunately it’s not adjustable. 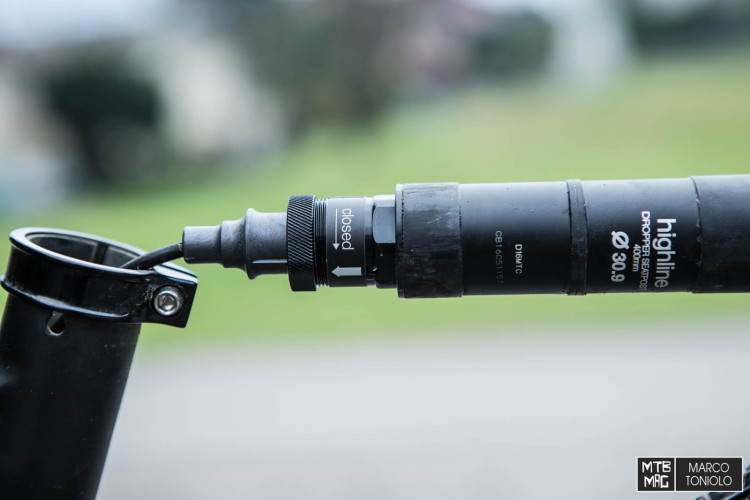 At the base of the post a knurled lockring locks in a plastic cable housing stop.  After unthreading this, you can separate the seat/post with a twist.  For those who fly with their bikes or try to fit them in the trunk of a smaller car, this is probably a pretty big plus. 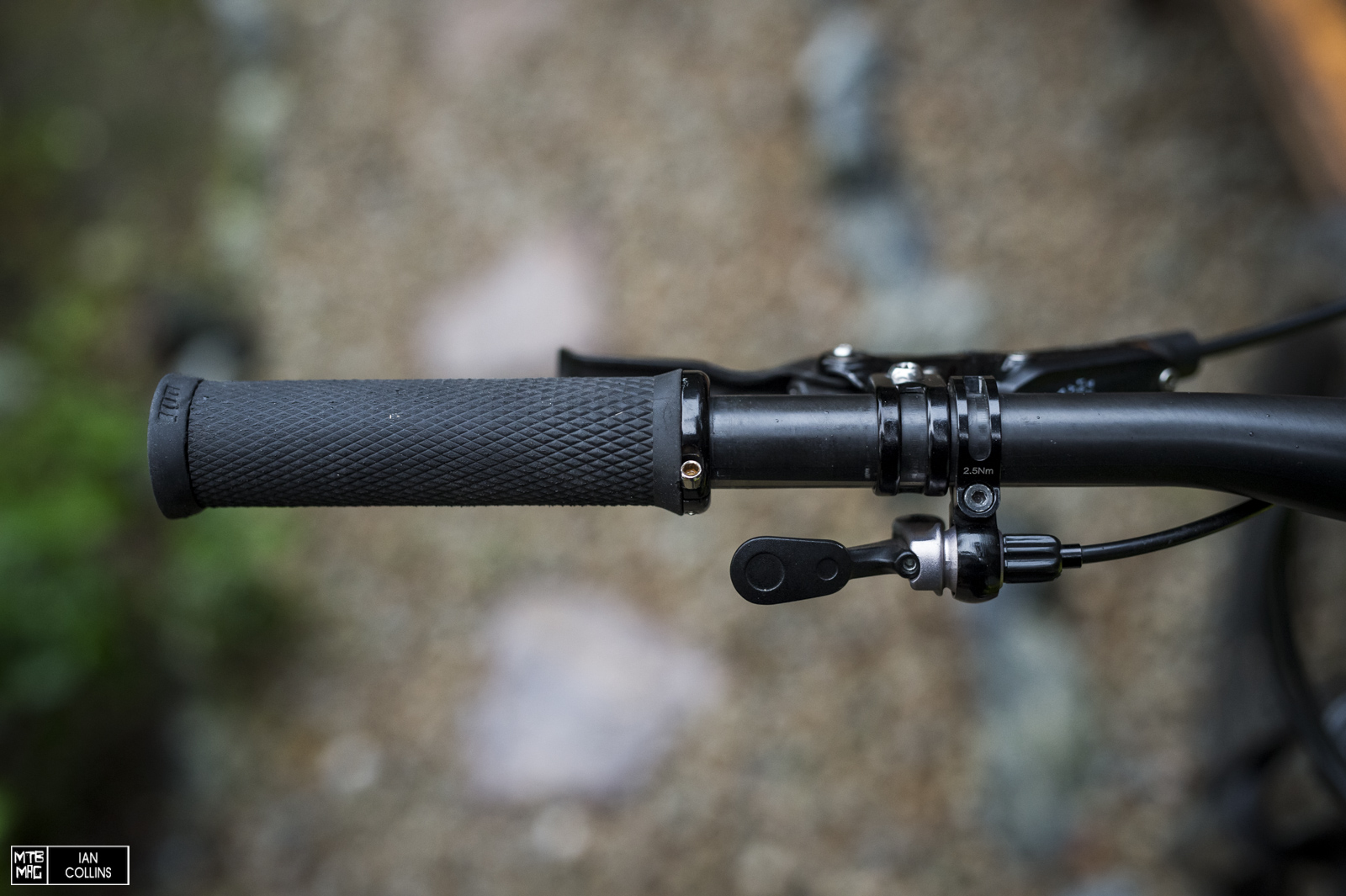 Anyhow, setting up the remote is quite simple, a 2mm set screw pinches the cut end of the cable.  We prefer posts desinged this way, with the butt end of the cable in the post.  That way you can make small adjustments to cable tension without needing to remove the seatpost.  Back to the remote…this was perhaps our favorite design element of the Highline,  The lever’s shape is comfortable and grabby, but what we really like is the spherical adjustment.  Even those of us with the strangest of cockpit setup preferences should have no problem finding the perfect angle and position.  By the way,  it’s available as an aftermarket option for use on other posts for $59.99. 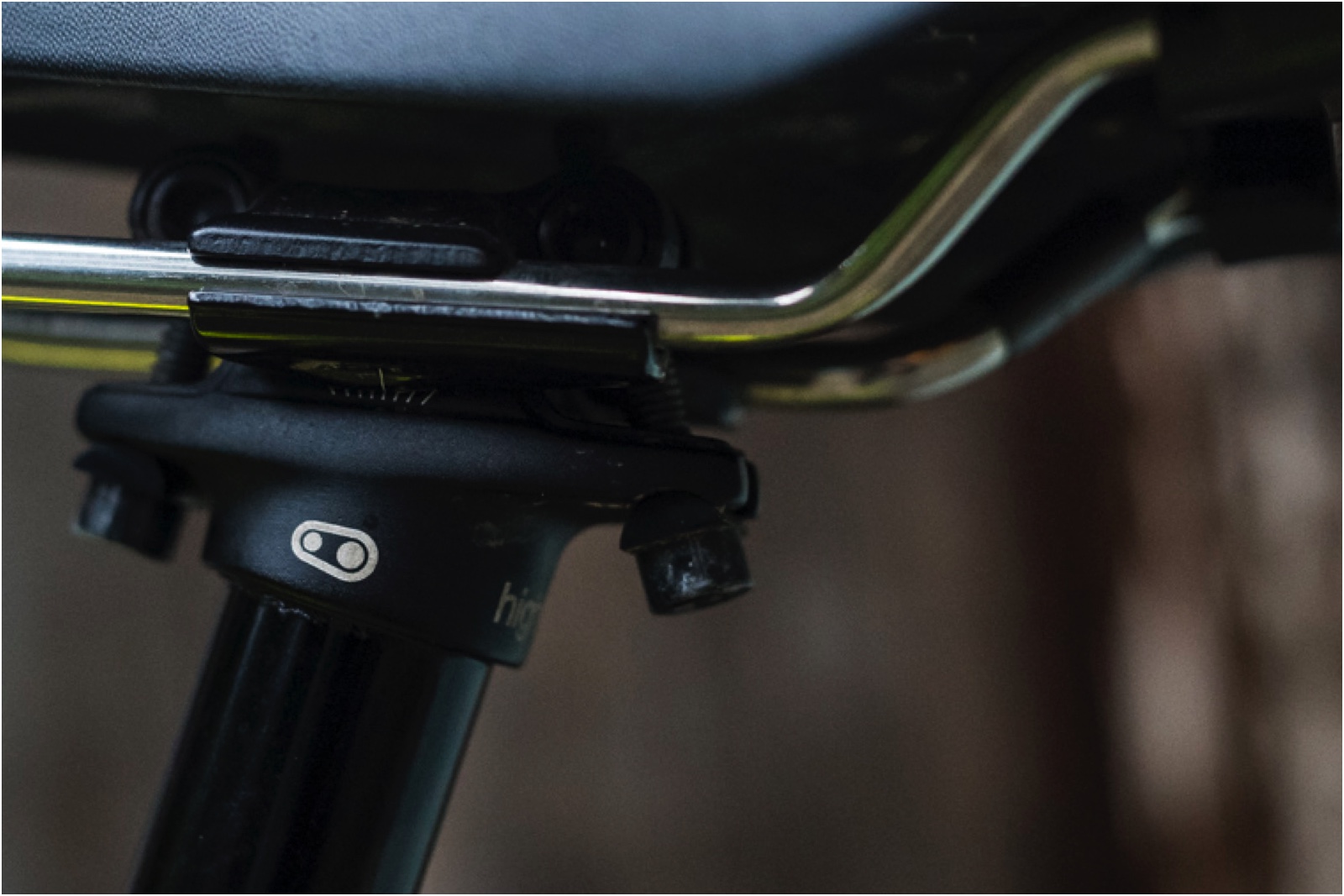 One detail that might go unnoticed is head of the post.  It has two screws that adjust the saddle’s angle while also allowing you to choose where it sits fore and aft on the rails.  We appreciated that Crank Brothers chose a larger 5mm allen as opposed to 4mm.  It’s simply easier to work with, and easier to dig mud out of when you do need to make adjustments. The designers also managed to remedy our one complaint with this classic style of seatpost head: they created a slot for the rear screw.  This makes it super quick and easy to install and remove your saddle and you won’t find yourself fussing with small hardware.  Sure it’s a small detail, but something that anyone with big hands and/or short tempers will appreciate, ourselves included.

Once we were done with setup(about 15-20 minutes) and everything was in its right place and functioning smoothly it was off to the trails.

The first thing we noticed about the Highline was its buttery smooth action and lack of any side to side play.  Crank Brothers have gone back to the drawing board completely and it shows.  The seals and bushings are super high quality and as mentioned, the lever is brilliant. 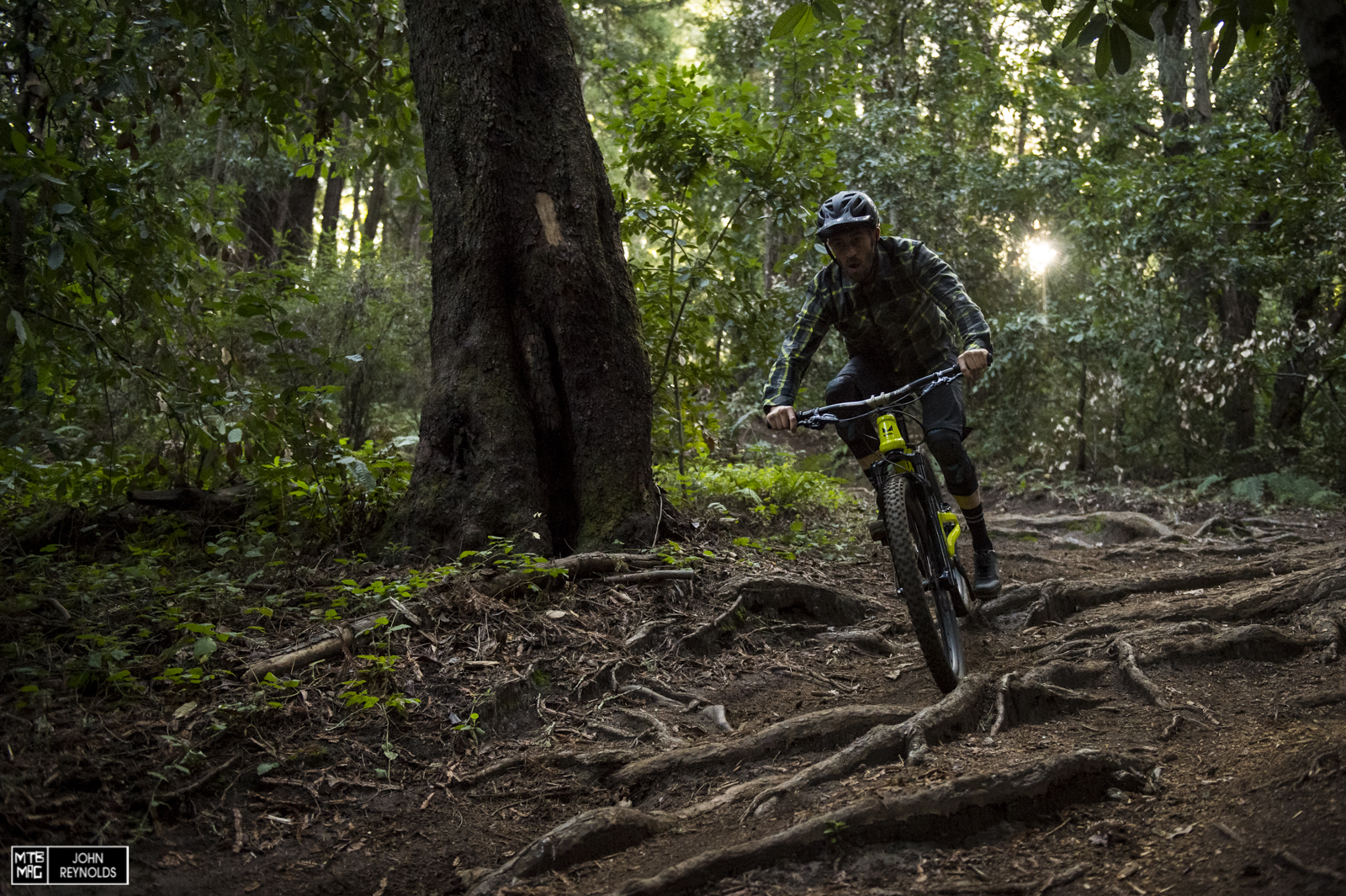 The second thing we took note of was the Highline’s fairly slow & non adjustable return speed.  It wasn’t problematic on  the trail, but initially it seems vague.  So if you prefer a seatpost that punches you where the sun doesn’t shine this isn’t for you.  We were initially concerned with how the highline would operate in colder temperatures so we took our sweet time with this review, waiting for the colder months.  Below you can see a video of the post returning after being left outside for about an hour at around 40º F

We’ve been riding the Highline for about 6 months now and have yet to find a major complaint.  We’re definitely counting down the days until the 150mm version is available, but functionally speaking the post is excellent.  We haven’t seen even a single hint at any particular shortcomings in terms of durability and the maintenance has been low as well.  We occasionally lube the cable, and Crank Brothers include a packet of grease for the main seal.  A quick unthreading of the knurled collar exposes both sides of the seal and the bushing.  A wipe down and re-lube is a 2-3 minute job. 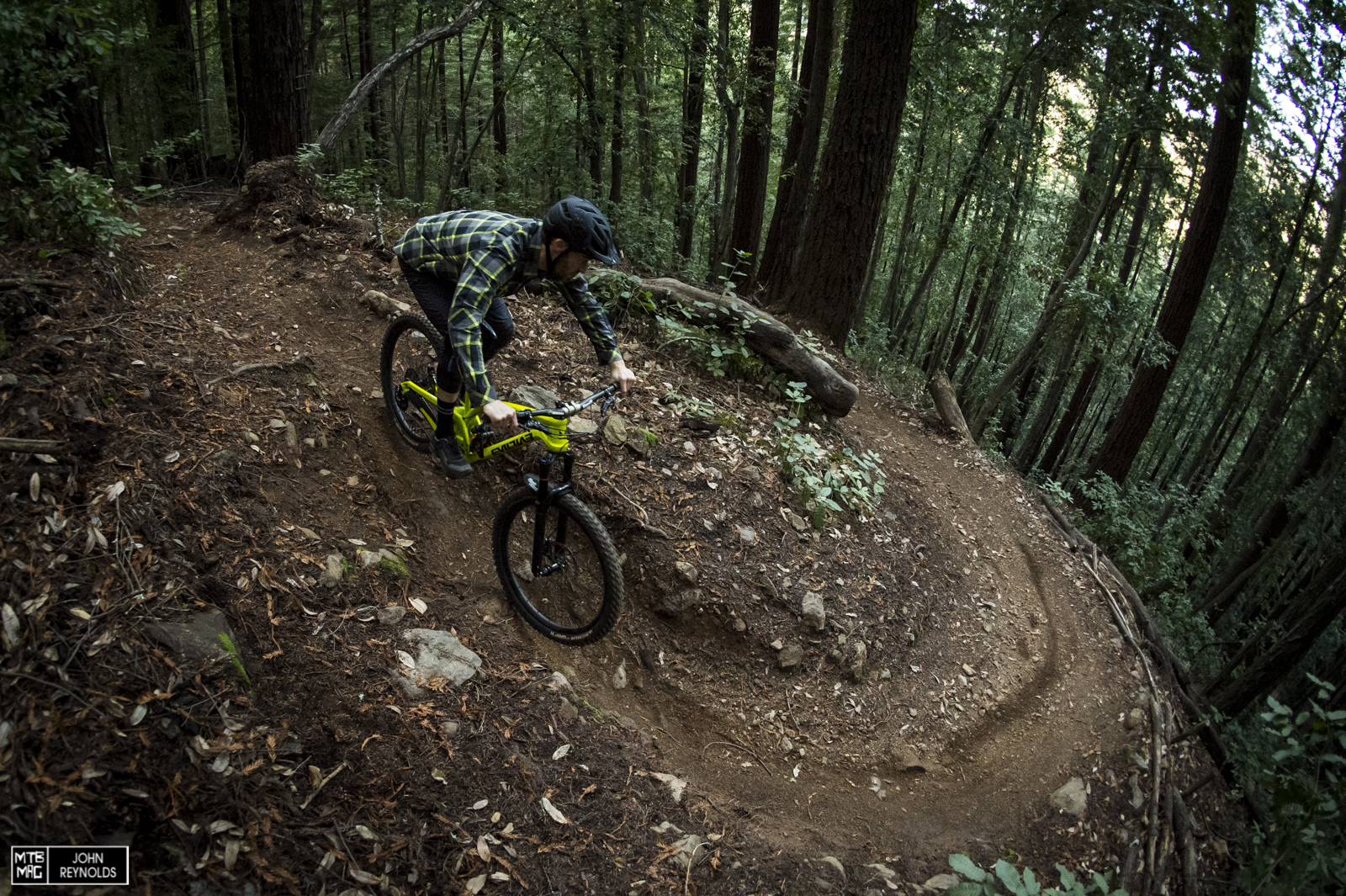 Crank Brothers have done it!  We really like this post.  They’ve chosen really high quality materials and it shows.  The features were well chosen, purposeful and original.  Although we wish we could get a faster return speed, it didn’t prove to be a major hindrance on the trail so we can’t complain too much.  The weight and price are on par with other solid offerings on the market but the lever is the standout for certain.  A 150mm version is certainly in order as soon as possible.  According to Crank Brothers, along with a 100mm version, it will be available in 2017.  Anyhow, all in all there aren’t any reasons not to consider this as your next post if you’re in the market.