Crankbrothers have been enjoying a pretty remarkable turnaround in the wheel world over the last year or so. Just a few years ago, they were riding out a design that was unconventional, but without any real good reason. They’ve done a full 180º with their Synthesis wheels, which are unconventional, but for very good reason(s). To be quite frank, they’re the best carbon wheels that I’ve tested to date. Following up on their success, crankbrothers have applied the same concept to a line of more affordable alloy wheels, which are now available. More specifically, that concept is the idea of being “tuned” for front and rear specific duties through better design. I’ve been logging some serious ride time on this new, more affordable version during the winter months – follow along for a review of the new Synthesis Alloy E wheelset… 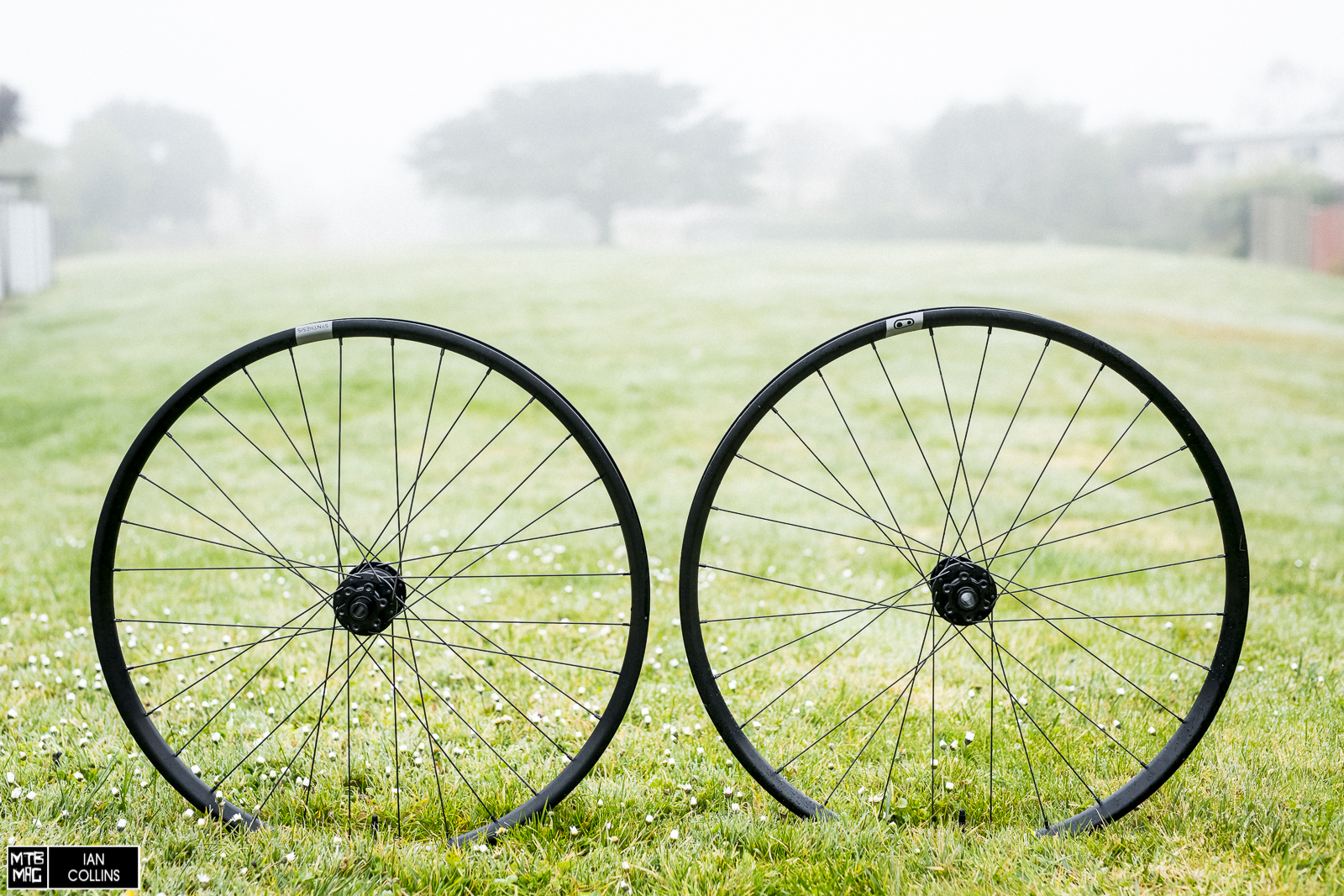 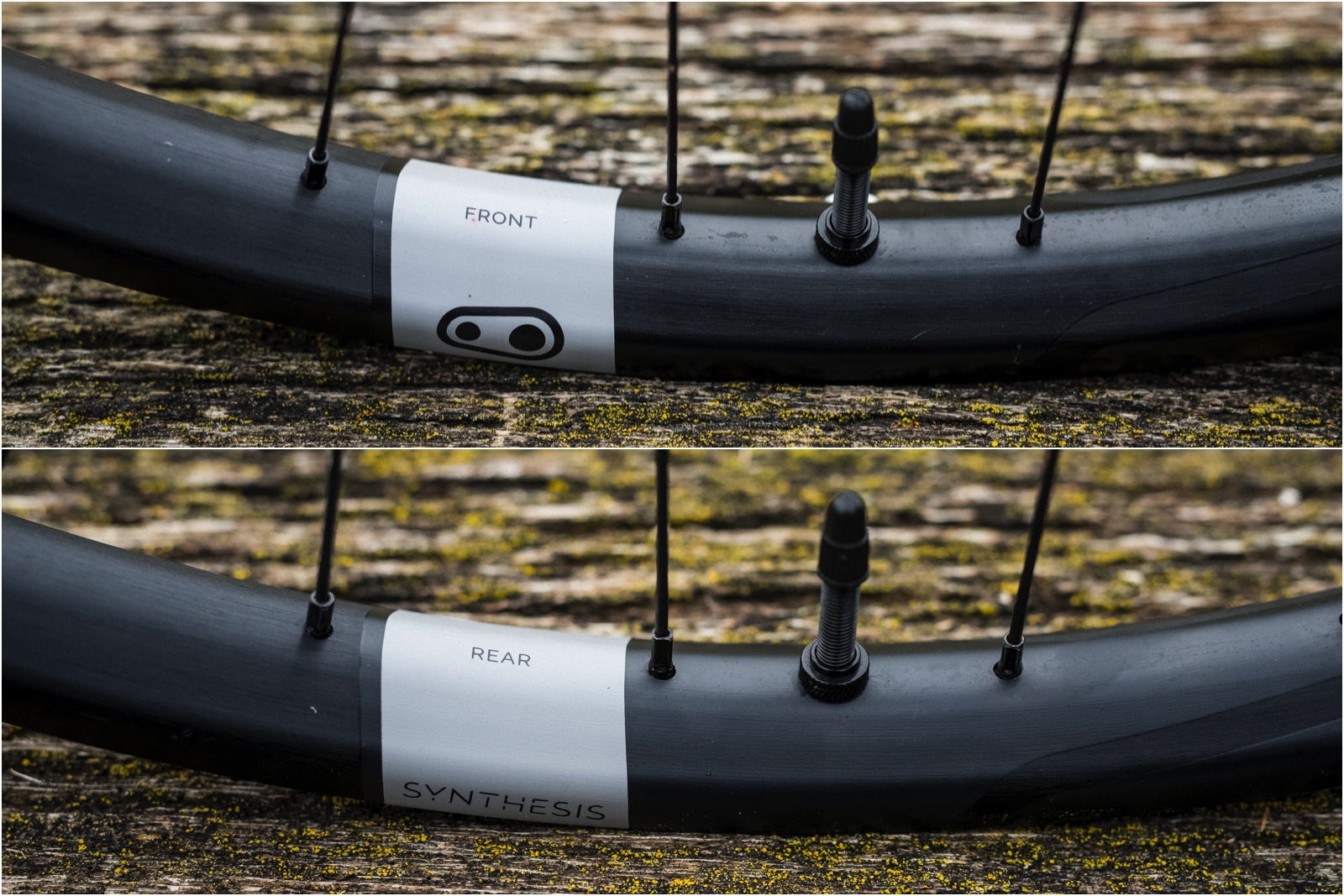 The front and rear specific approach is carried out in three ways – with a varying spoke count (28 hole front / 32 hole rear) and spoke gauge as well as with specific rim widths. Just like the Synthesis carbon wheels, the front and rear rims have 31.5mm and 29.5mm inner diameters, respectively. The front/rear specific spoke count helps encourage compliance up front and added strength and stiffness out back where the wheel bears more weight. The varying rim width helps provide the front wheel with a broader tire footprint, as you’re more apt to run wider tires in the front than the back of the bike. 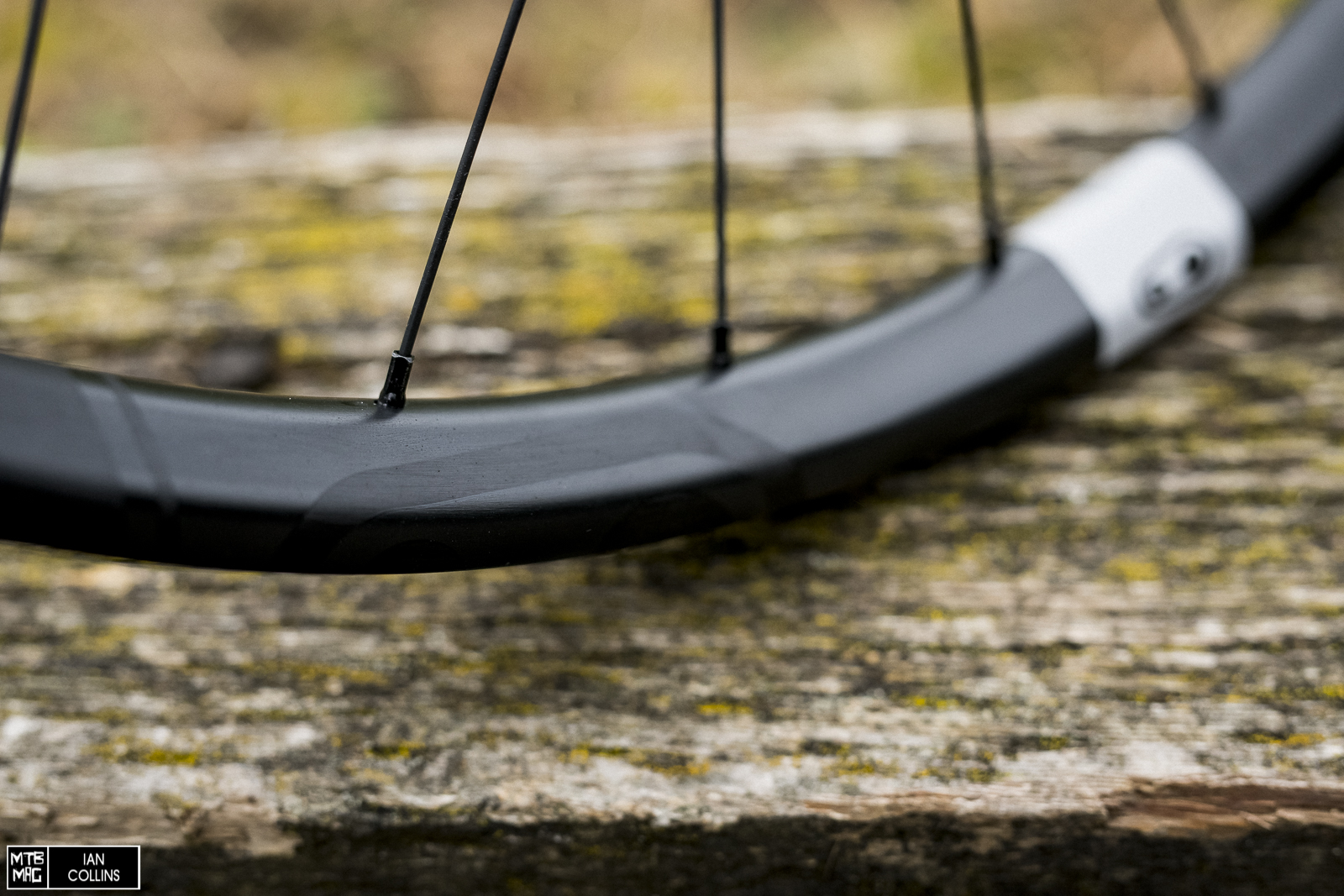 The graphics are clean, classy and part of the final surface treatment, rather than cheap decals. There are no eyelets in the nipple holes. This saves weight, and a rather strong case has been made that it’s actually a sturdier way to build a rim. 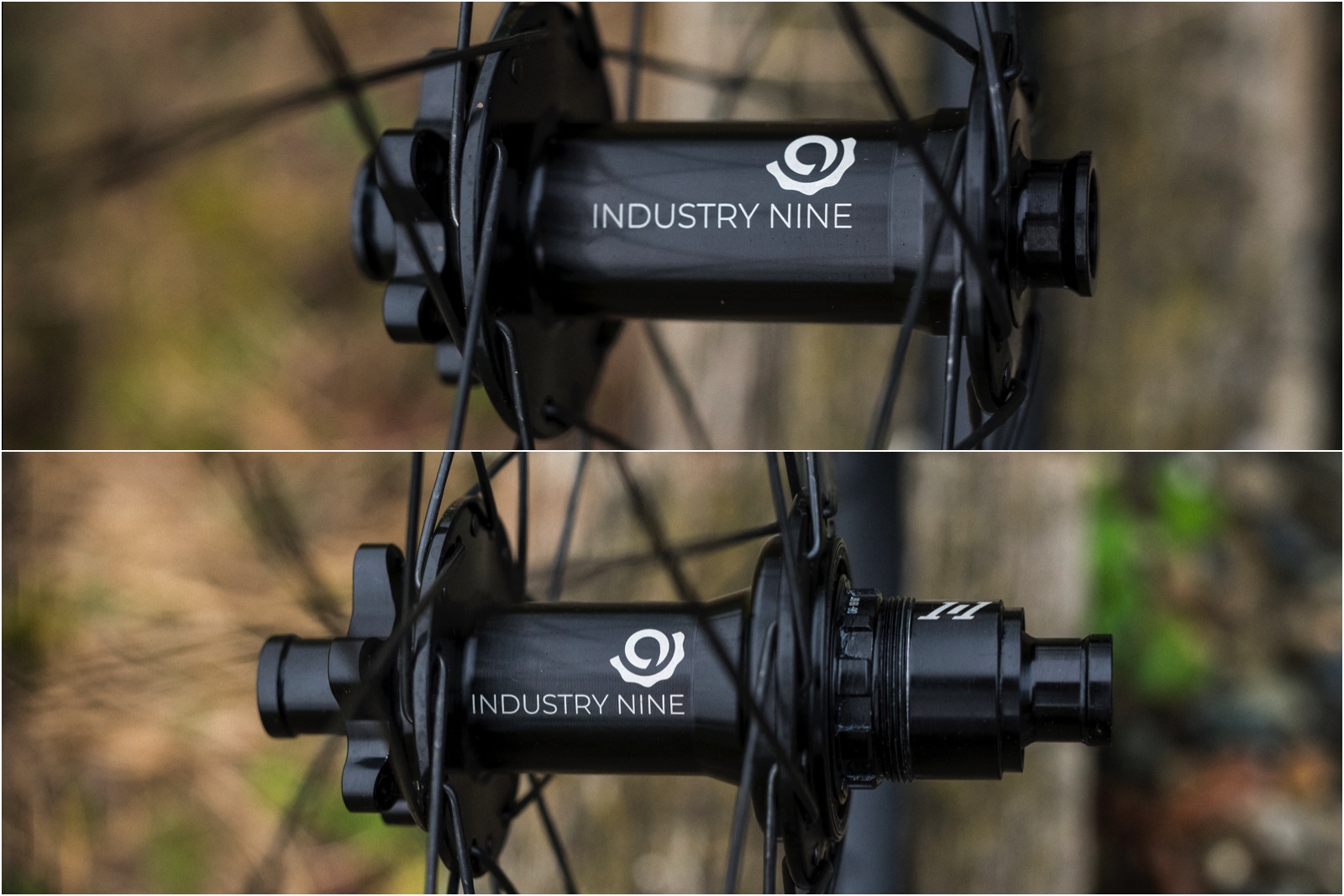 The Industry Nine 101 hubs quickly became an excellent mid priced boutique offering that many wheel manufacturers are leaning on. They’re easily rebuildable by hand (read: no tools required), simple, smooth and bulletproof. I’ve had great luck with them in the past and have nothing bad to say about them. Their engagement is quite fast as well. 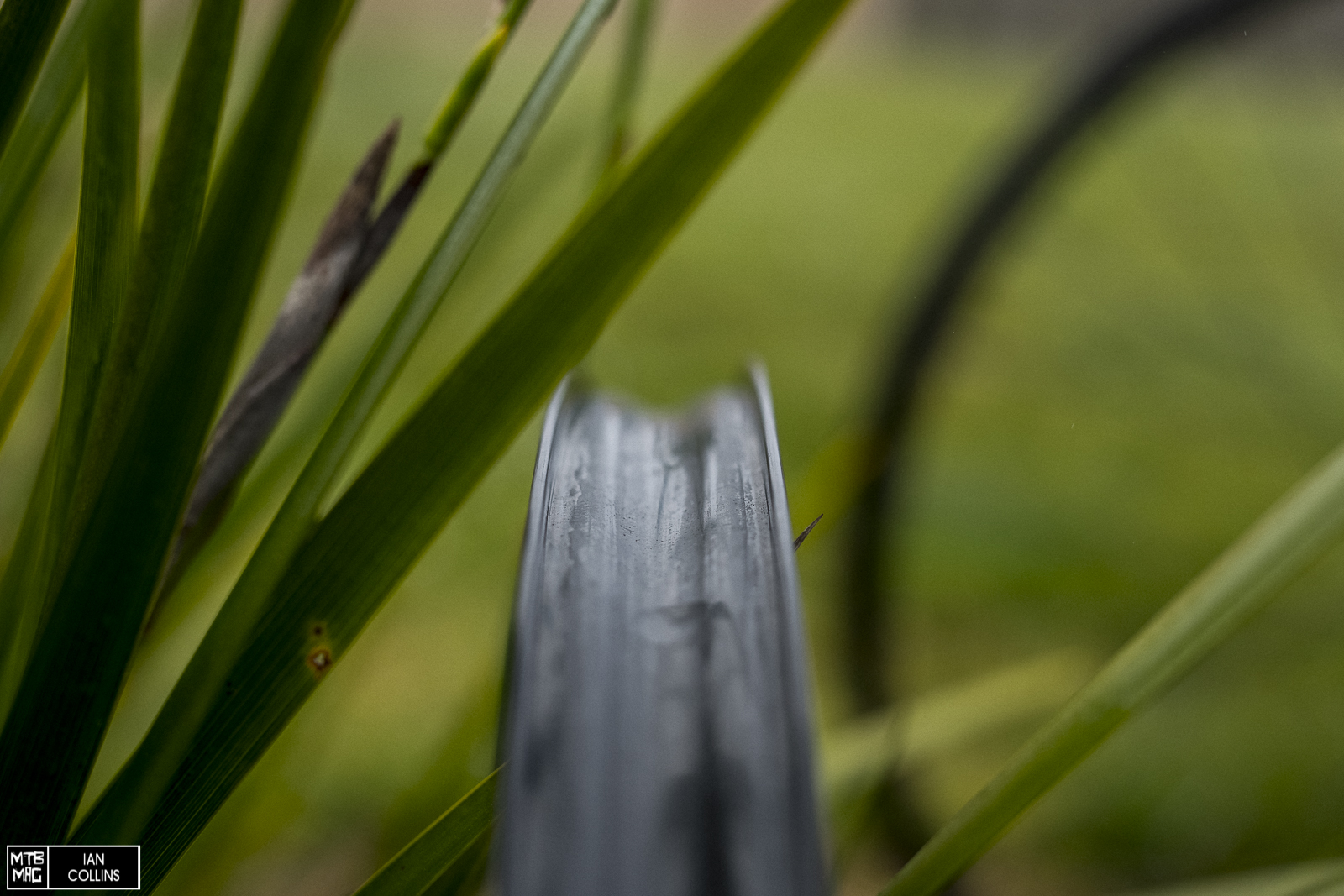 Following recent trends in both the carbon fiber and alloy rim world, the Synthesis rim is neither very deep or very shallow, but rather it is right in the middle. They feature an asymmetrical shape for better spoke bracing angles and a stronger wheel build. Unlike most carbon rims these days, but keeping in line with most alloy rims, these do in fact have a bead hook. Tubeless tape and valves are included as standard.

Suffice to say, it’s been a while since I’ve spent a bunch of time aboard aluminum rims, especially on a personal bike of mine. I opted to test the Synthesis E Alloy on my 27.5″ Yeti SB-165 which started with carbon fiber Roval wheels – it has been interesting going back and forth between the two wheelsets. Tubeless setup was a snap with a floor pump, and so was the cassette installation. All three of the popular driver bodies are available for both this version with I9 hubs, as well as the more affordable option with in-house crankbrothers hubs. At 1937 grams, the weight is quite respectable given how burly they are – they weigh in at roughly 150-200 grams more than the carbon wheels they replaced, but also come in at exactly half the price. 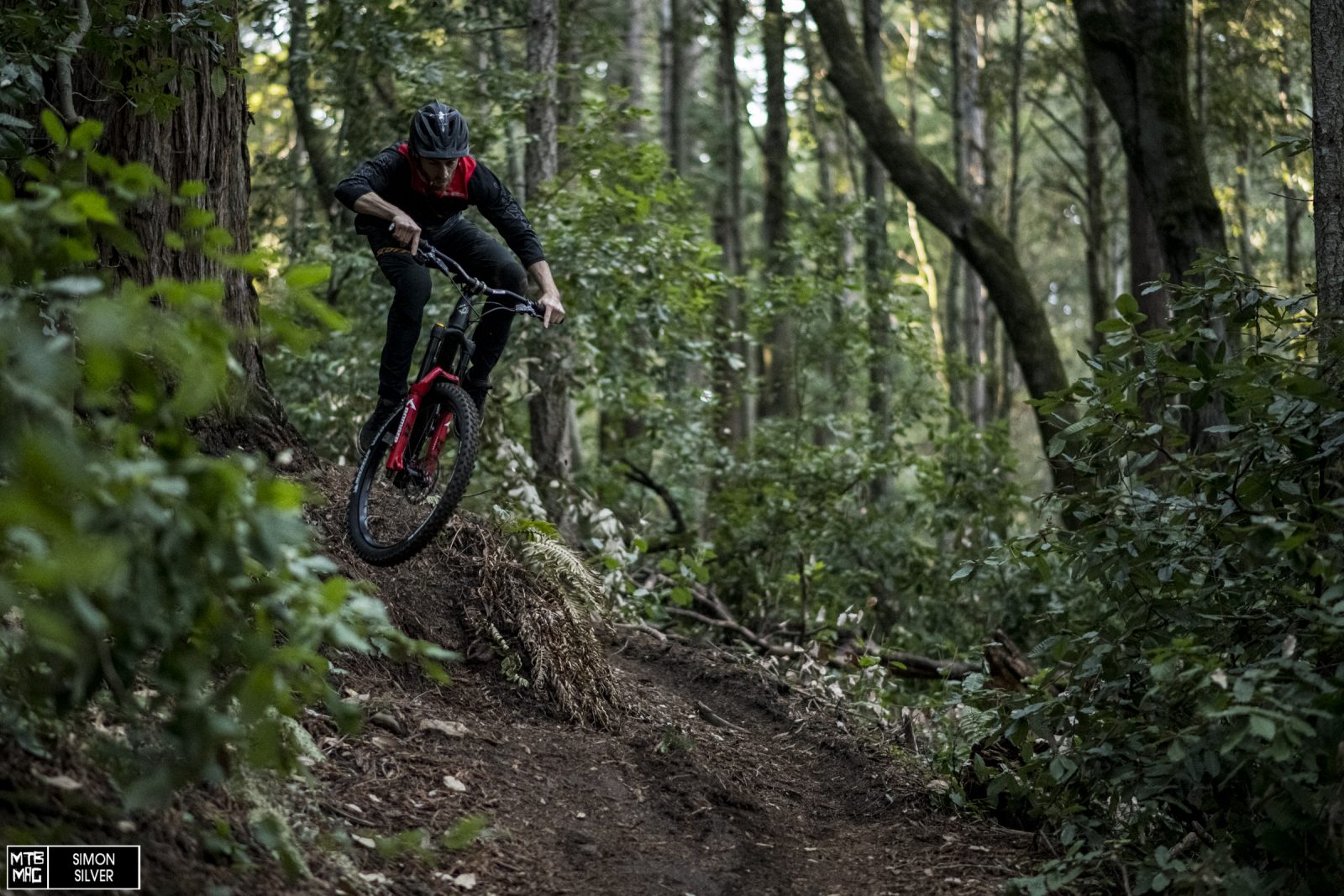 As far as on trail feel goes, the Synthesis E Alloys were quite nice – particularly for an alloy wheelset. While they did lack that certain springy liveliness carbon exhibits, they felt really good – at the very least, they were far less “dead” than most alloy wheelsets. In fact, I’d argue that they took on high frequency trail chatter better than some of the stiffer carbon fiber options on the market which I’ve tested as of late. The difference in front and rear wheels’ construction was definitely perceptible on trail, mainly due to different spoke count and spoke thickness. I’d be lying if I claimed to feel a difference from the 2 millimeter variance in inner diameter widths, but on paper it certainly is a better approach. It also means trickier logistics and more SKUs to keep track of, so you’ve got to hand it to crankbrothers for going the extra mile. 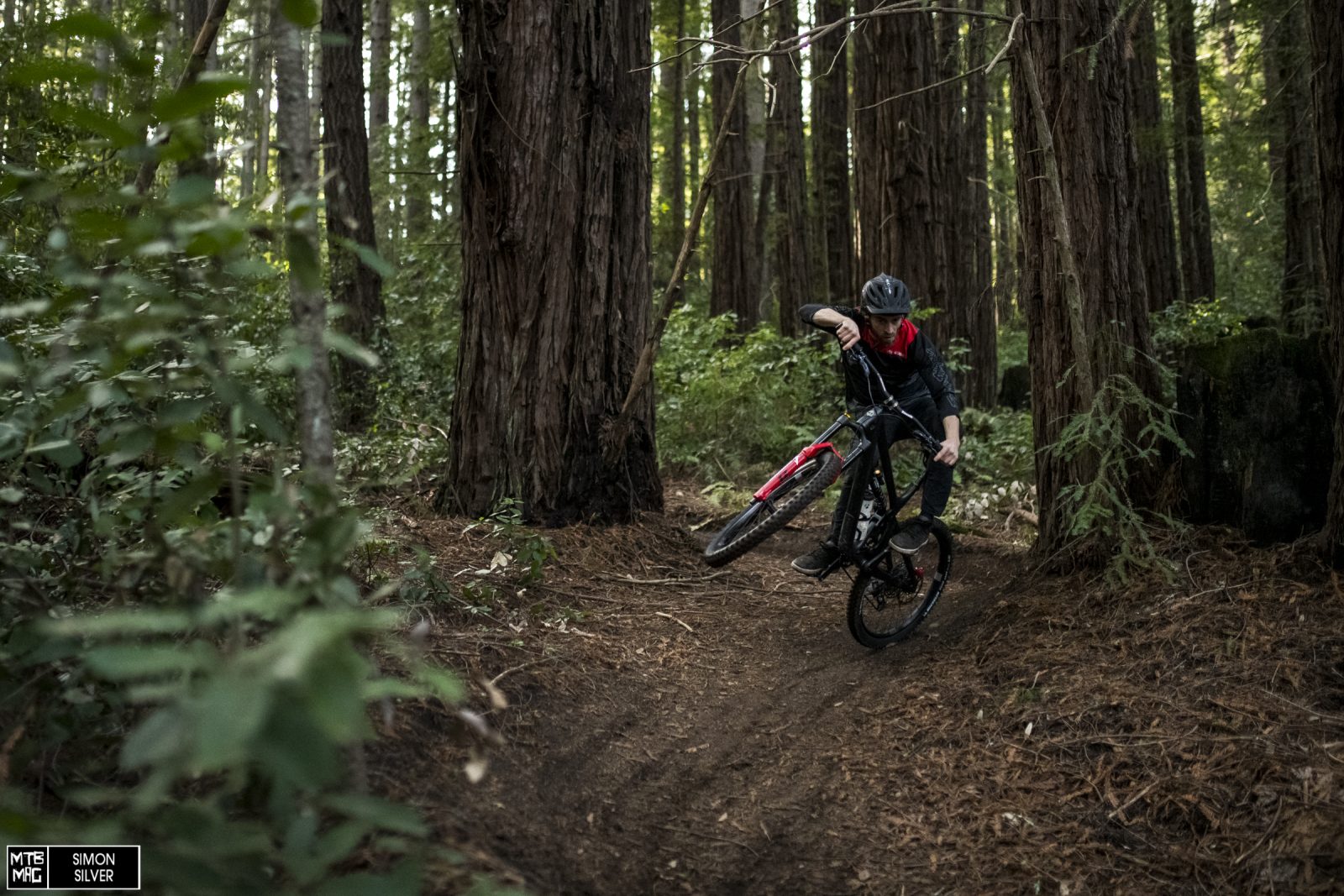 A 30mm inner diameter seems to be right where most brands want to find themselves for the average heavy duty trail/enduro rims these days. With the Synthesis E Alloys hovering right around there, they provided a nice tire footprint and good support in the turns. I tried them with a 2.4 and rear combo and a 2.6fr/2.35rr combo and thought the support was excellent with both. Anyhow, Santa Cruz isn’t known for being ferociously rocky, but I sought out some of our roughest trails this winter and even tinkered with pressures down in the high teens, which is way lower than I usually venture. As of writing this, despite my best efforts, I’ve yet to flat, dent, flat spot or knock these out of true. I also bashed a few turns a bit too hard and haven’t managed to burp my rear tire – side to side, the rear wheel is really really really stiff.

The Synthesis E Alloy wheels are a very utilitarian, mid priced option but are far from rough around the edges. In fact, they’re very well thought out. Sure you can find wheels out there that are cheaper as well as more expensive. Unless you dive into a custom build, you most definitely will not find a complete aluminum wheelset with this much attention so well spent on achieving specific front and rear ride characteristics. So the big question is…who do these wheels make sense for? I would think that a privateer Enduro racer would be all over them, as well as any rider looking for a damn good set of mid priced wheels that are no frills and built to last.

[Video] BCBR: We Are All Mountain Bikers