In the flat pedal world, it isn’t too often that something truly unique catches our eye while still actually looking promising.  Quite some time ago we got ahold of a set of Tyler McCaul’s signature Deity pedal.  Appropriately dubbed the T-Mac, they have one of the largest platforms that we’ve seen to date…at least in the high performance realm of MTB anyway.  With a surprisingly deep 2.5mm concave, and an abundance of radiuses and chamfers at the edges, it looked to be a serious contender right away.  Fast forward well over a year later and we’re finally getting around to reviewing them.  Here’s what we thought… 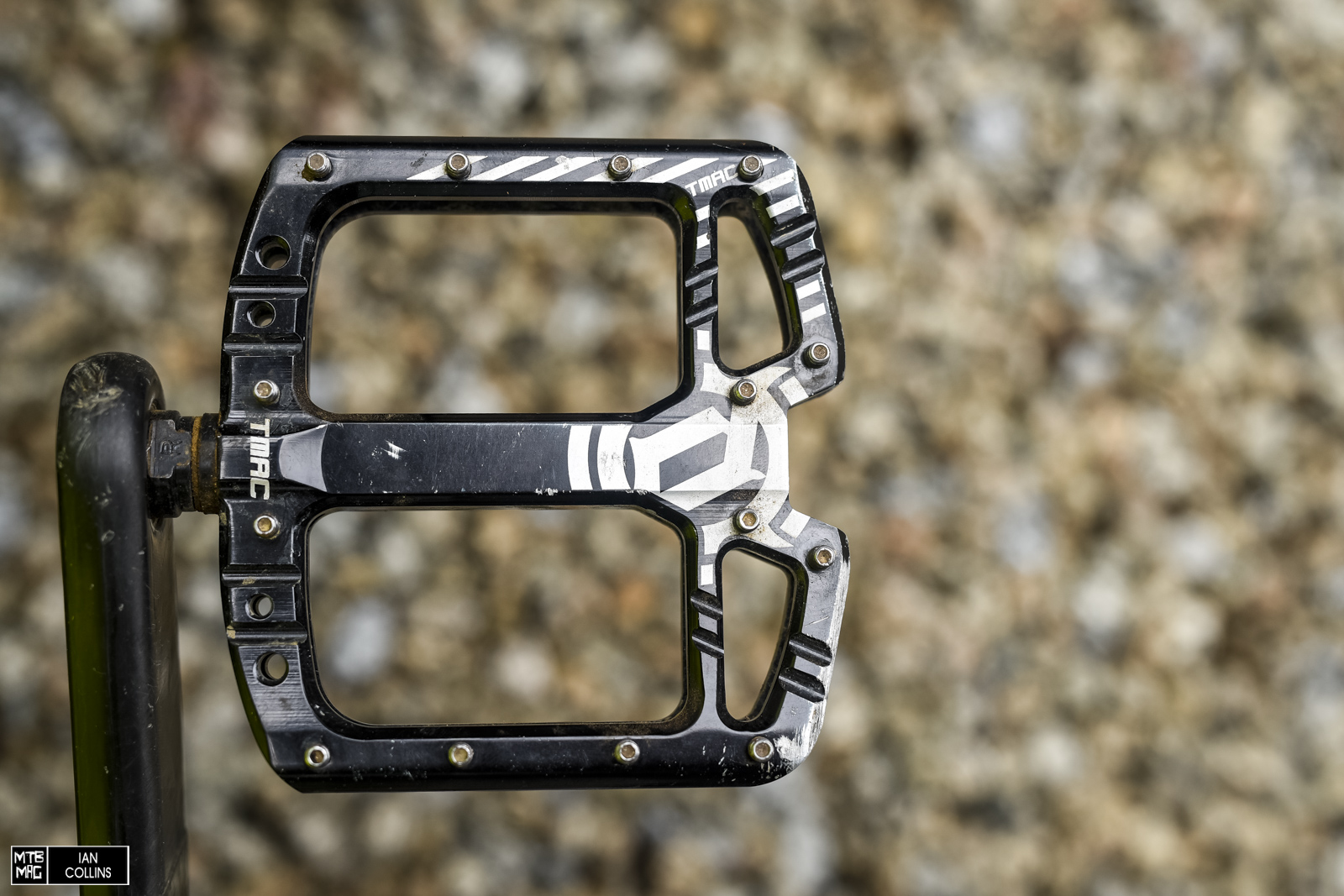 When you first take a look at the T-Mac’s, they’re really quite large; the broadest pedals that we’ve rested our feet on thus far.  They have plenty of pins: 14 on each side to be exact; and you can remove/replace them as you see fit.  What you wouldn’t expect is just how much concave these bad boys have; that’s something that you won’t notice until you stand on them or take a gander at them from the side(see below)…Perhaps the amount of concave is a bit deceptive due to their square, symmetrical shape. 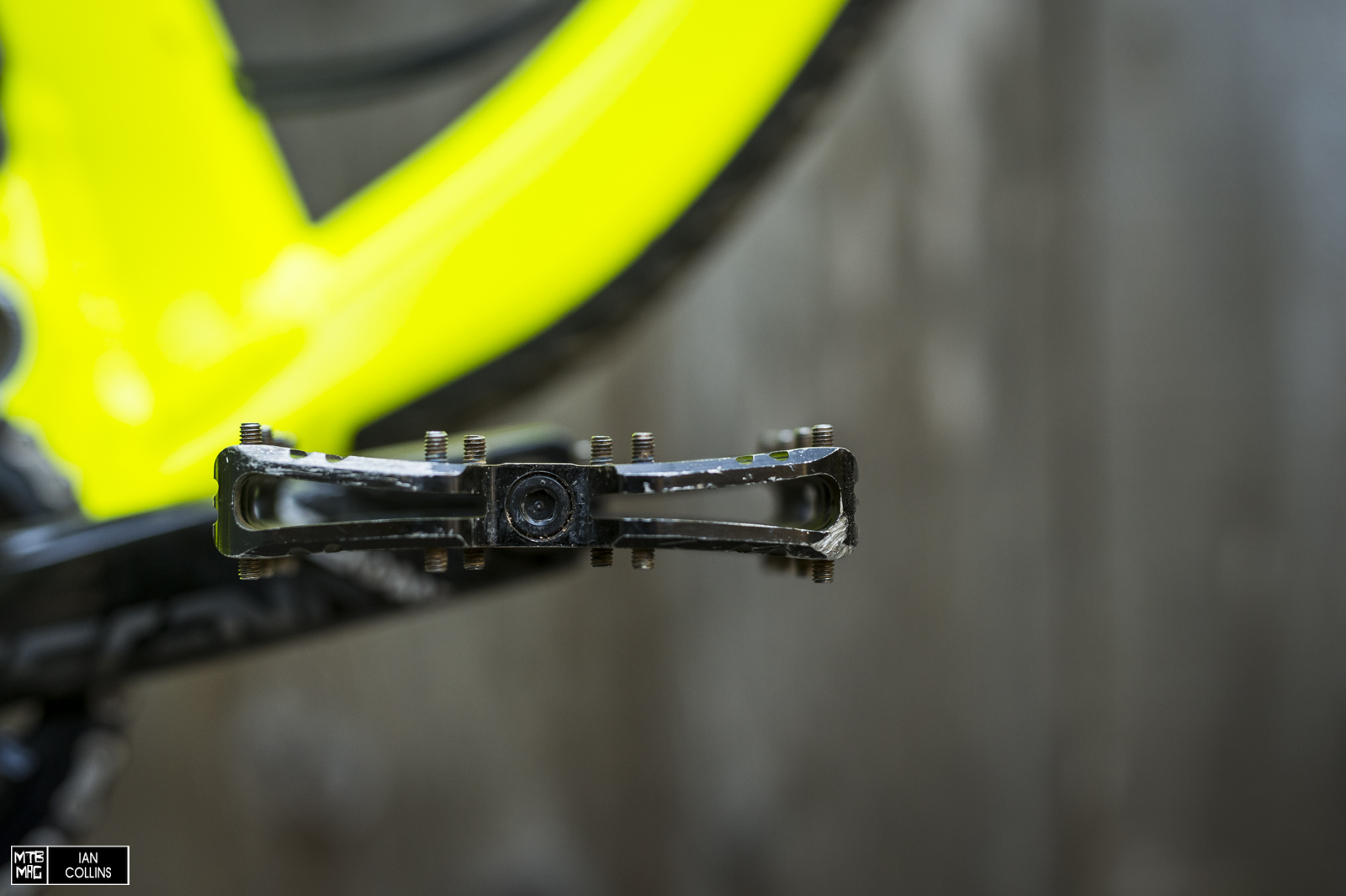 Anyhow, why get so hung up on concave?  Well, as you put weight on the pedal and find the “sweet spot”, your feet “settle in” to them in a sense.  Ideally, unless you prefer very quirky footing, you want the ball of your foot to be able to settle in right over the axle.  Another note is that it’s pretty cool that Deity includes an entire extra set of pins that have already gotten the loctite treatment. 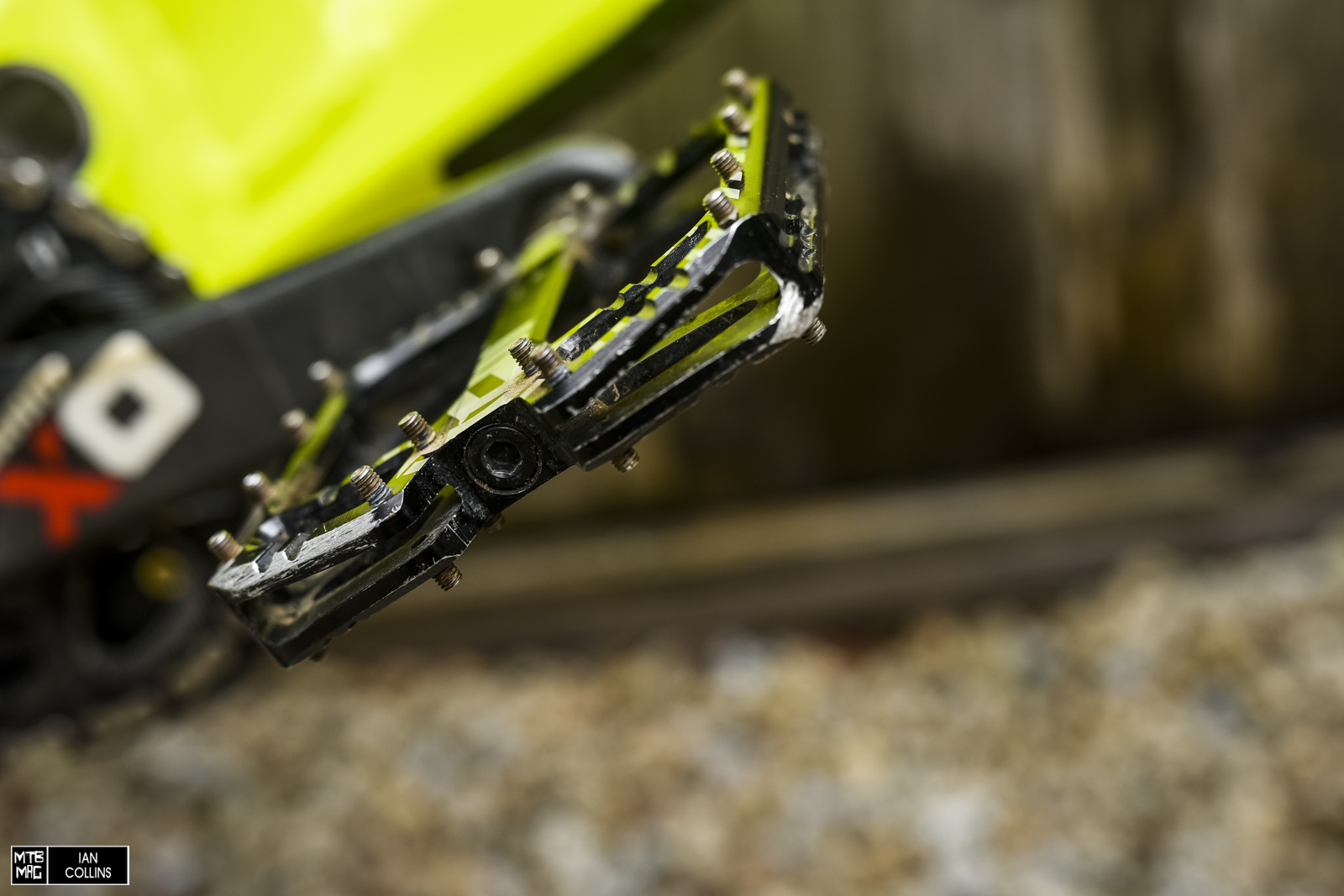 Moving on to the technical stuff, as you handle the pedals, you’ll notice a great deal of machine work.  The T-Mac’s have a crazy amount of relief; they’re radiused on the front surfaces and chamfered at the sides.  This helps prevent them from hanging up on rocks and roots as they’re more apt to glance away after unwanted contact.   Between each platform the pedals have been carefully shaved away with loads excess material removed, hence their fairly light weight for their size.  Lastly after a quick glance at the axle you’ll notice that you can install/remove the T-Mac’s with a standard 15mm pedal wrench or an 8mm allen key.

At this point we’ve ridden Deity’s latest pedal on 3 different bikes, or perhaps it’d be better to say we’ve used them for 3 different disciplines: DH, Trail, and general shenanigans on our Trek Ticket S.  As we mainly ride clipless pedals on the trail bike, we’ve spent the most time aboard the T-Mac’s on the DH bike and we think that’s what they’re best suited to as they’re big, tough and rather aggressive.  The first thing we felt was their size – it’s almost overwhelming.  One thing you’ll notice with a pedal this big is that the occasional dab of the foot, followed by a somewhat poor replacement of the foot is of less consequence than with smaller offerings.  If you tend ride loose then you’ll appreciate this; it’s almost difficult to get your foot stuck in an awkward position on the T-Mac’s.  The downside to their size is that they aren’t as quite low in profile.  While they are plenty thin, they do stick out a bit and you have to be mindful of them in really rocky and/or rooty terrain as they can snag on obstacles more easily than smaller pedals. If you’ve got big feet that totally cover the pedal then it won’t be a factor.  Our test rider is a size 10.5(US) and although he wasn’t really thrown off by their size, he could tell it was best in his best interest to be well aware of them. 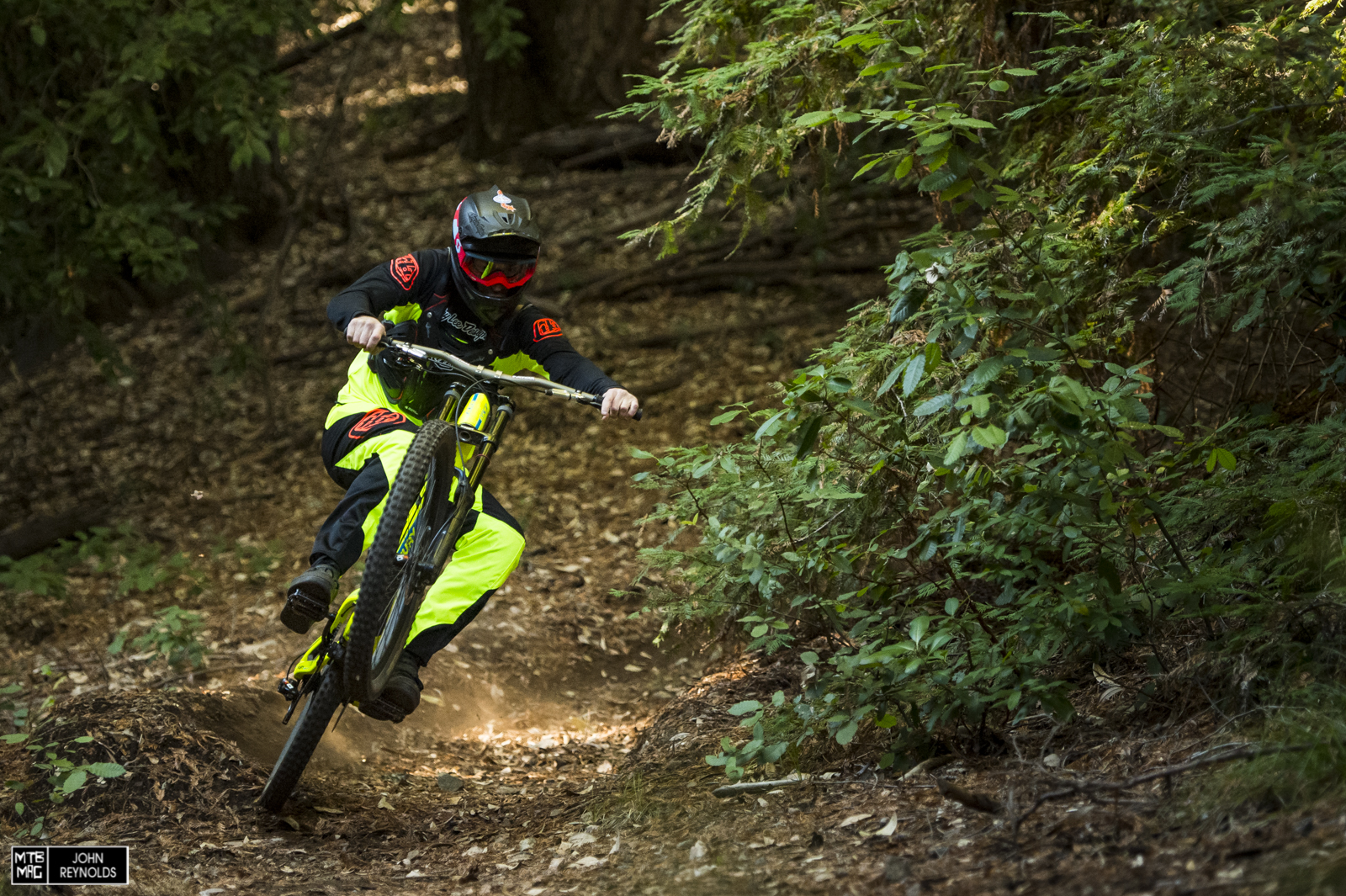 As far as traction goes, the T-Mac’s are as good as it gets.  There are plenty of well placed pins, in fact riders who use super tacky shoes may want to considering taking a couple of pins out per side to make it easier to adjust their foot positioning on the pedals.  We typically prefer a design where pins thread in from the back side of the pedal…Due to their symmetrical design this isn’t possible with these pedals but it also never caused us any problems or pin blowouts so we really can’t complain.  Another interesting bit that we noticed on the trail was that the pedal sits a fair way out from the crankarm.  Due to that, we never had that annoying feeling of cranks rubbing on your the inboard side of shoes and ankles.

All in all the T-Mac’s are right up there as some of the best flat pedals we’ve ever used.  Their traction is unreal and the concave allows your feet to quickly find and settle into that comfortable, ideal position.  The pins are all still intact and the bearings are running as smooth as they were when we opened the box.  We’ve cased plenty of jumps on them (ironically once in front of Tyler McCaul)and the heat treated chromoly axles are straight as can be.  Their size can be considered a double edged sword, as they do protrude more than most pedals.  However, they’re quite thin and well designed to avoid hang ups.  For most riders in most situations it’s unlikely that the size would be a hindrance.  If you are in the market for flat pedals and have big feet in particular, you’d be foolish not to take a serious look at the T-Mac’s.

[Video] This is UR World : Inside the MTB world cup circuit – Full movie