For a few years now, ENVE has been known as the premium carbon fiber wheel manufacturer on the market.  It wasn’t until the last couple of years that other brands began to catch up and give them a run for their money so to speak.  Most recently, ENVE began offering a few of their carbon rims in a high volume width.  To elaborate, they offer  six rim profiles for MTB : M50 (XC), M60/M60HV (Trail), M70/M70HV( Enduro) & M90 (DH).

The M60 and M70 are offered in standard and high volume profiles.  Sensibly, ENVE chose to leave the XC and DH ends of the spectrum with just one profile per discipline.  Anyhow, we recently jumped aboard a set of the new wider, shallower rims laced to the ever trusty DT-Swiss 240 hubs.  In case you haven’t already heard, the point of “High Volume” rims is to broaden your tires’ footprint a bit while providing it with more volume.

High Volume wheels are generally stiffer and stronger, and in adding tire volume, they allow you to run lower pressures, thus providing more traction.  Long story short, they provide a host of benefits.  Let’s see how they’ve been holding up to the last few months of abuse. 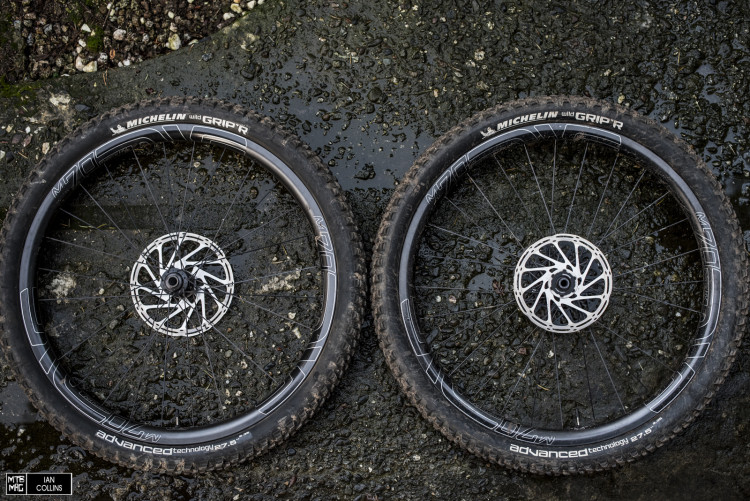 When we first started planning our time on this wheelset, we knew we wanted to ride a couple of different tires to see how they fared.  We spent time with a relatively narrow and round profile Maxxis Shorty, a middle of the road and rather square profiled Specialized Butcher and most recently a bulbous Michelin Wild Grip’r…Each tire suited different conditions but was familiar to us from past trail time so we had a solid basis for comparison. 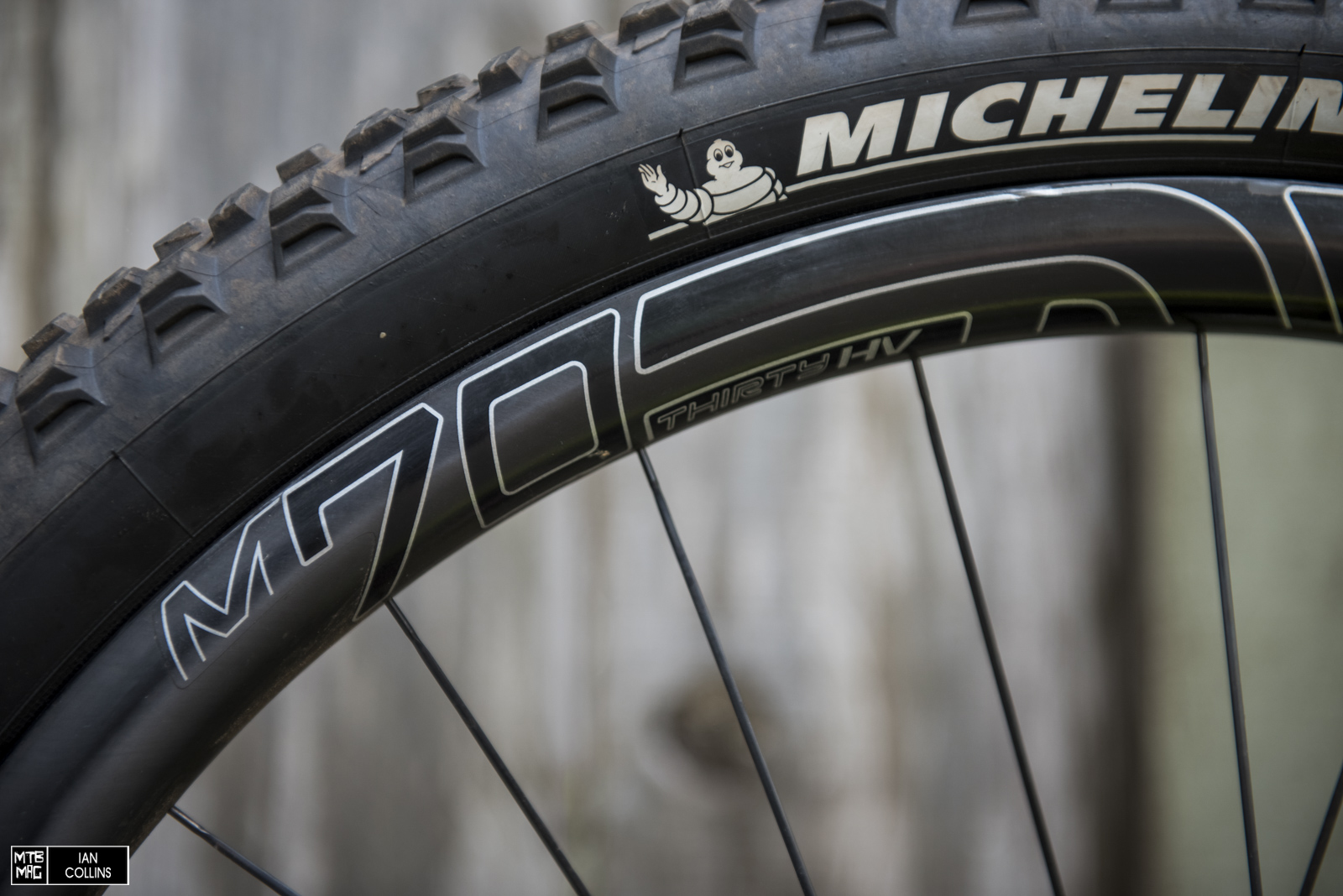 Our wheels arrived with centerlock hubs which are meant for Shimano rotors.  The bike we planned to test on was fitted with SRAM Guide Ultimates so we ordered adapters – the first ones were DT Swiss and they sucked.  The Shimano ones pictured below proved to be far superior so remember that if you find yourself in the market for adapters. 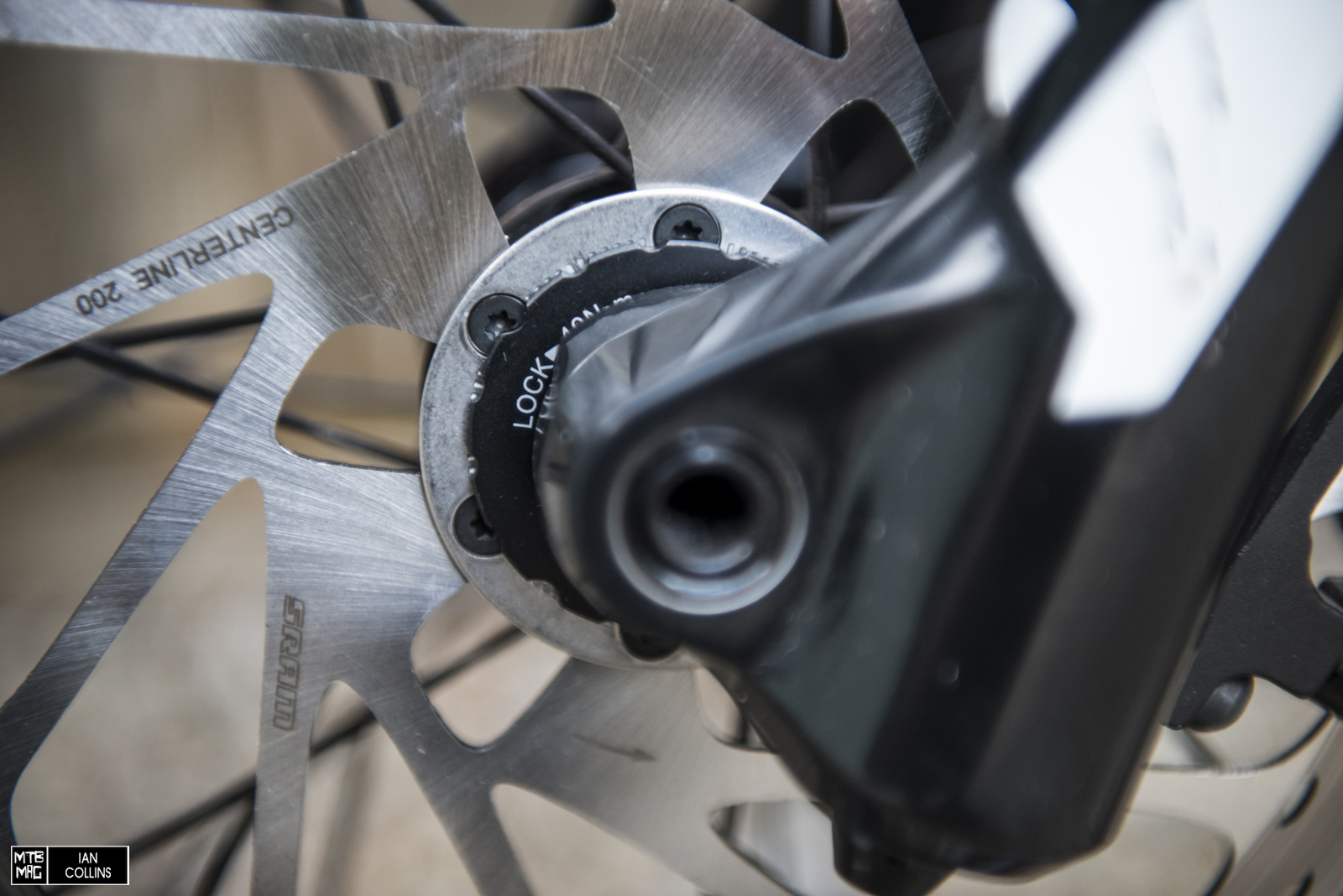 Moving on and more importantly, ENVE offer both standard DT Swiss 240 and Chris King hubs as options for complete wheelsets that ship directly from them.  It’s worth noting that ENVE turn these out in a rather impressive 48 hours.  They’re also available with HG and XD drivers.  If you are just after the rims, no problem – you can order a pair in either 28 or 32 hole and lace them as you’d like. 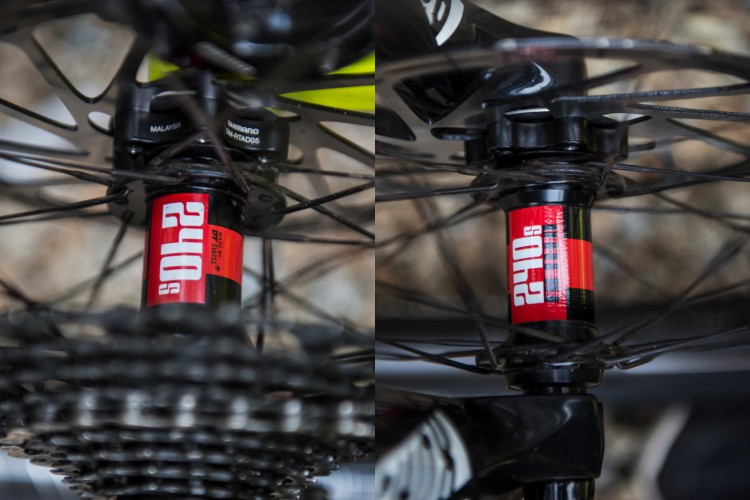 Our only minor gripe before hitting the trails was that the hubs weren’t fitted with the 54 tooth star ratchet upgrade.  Instead it shipped with the rather pedestrian feeling 18 tooth ratchet.  To swap to the 54 tooth is an easy tool free job, and reasonably priced, but for the cost of this wheelset, we feel it should be included as a fast engagement does improve the on trail experience dramatically.  Specifically by offering quicker response our of corners and on technical climbs.  With that in mind we have no complaints about the DT Swiss 240 hubs.  We’ve been using them in various forms/dimensions for years and they’re fantastic – smooth, light and tool free. 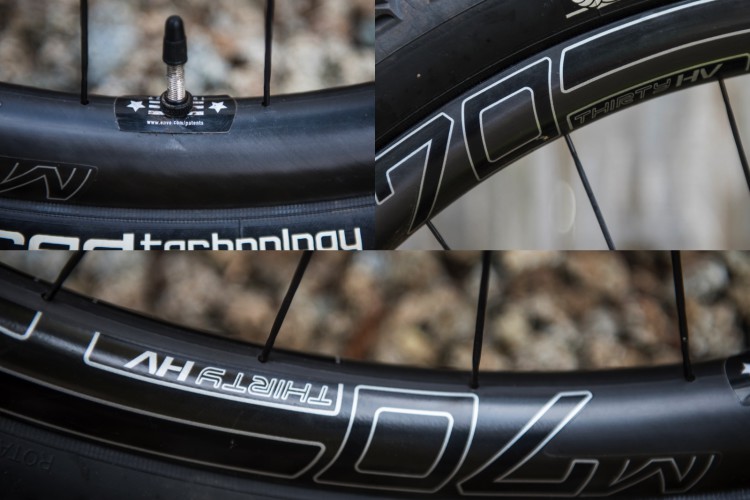 As far as setup went, the rim tape that ENVE provides is thick, durable and easy to apply.  The M70 Thirty HV’s were easy to set up tubeless.  In fact, we never once ran them with tubes. Hookless rims can be tough to set up if the rim doesn’t have a drop center.  Fortunately these rims did, although it wasn’t too deep. That’s a good thing though; it made tubeless inflation a snap, even with a cheap floor pump.  Beyond simply inflating tires, it is also easier to install/remove tires when they have a mildly pronounced drop center as well.

Our first ride on the M70 Thirty HV wheels left us with a lot to take in.  Immediately we noticed the stiffness, even compared with other carbon offerings ranging from 28mm to 41mm that we’ve tested recently.  Compared to the standard M70 wheels that we’d ridden in the past they were substantially more rigid but not too much so – rather, they were just right.   Perhaps our initial shock was partly due to running our default tire pressures which are somewhat high.  Those pressures would eventually come down, but we were no less impressed with the stiffness or the handling…

As mentioned above we’ve tested a 28mm wide carbon wheelset and a 41mm wide wheelset in the last year or so.  With both wheelsets it was important to keep tire profile in mind when choosing tires.  For instance – a wider, rounder tire was more apt to fold over and squirm the narrow 28mm  wheelset.  On the contrary, square shaped tire profiles didn’t fare as well on the 41mm wheelset as they became vague when transitioning into corners.

We found that the 36mm outer diameter of the ENVE M70 Thirty HV rims struck the perfect balance of increased volume without  throwing off the profile of any of the 3 tires we tested.  ENVE recommends tires in the 2.4″ – 2.5″ range for these rims and it was no surprise that we had the best results with a 2.35″ tire that actually measured at 2.42″.  With that in mind, we ran 2.3″ tires that measured accurately and had no complaints with regard to the profile it took on when mounted to these wheels. 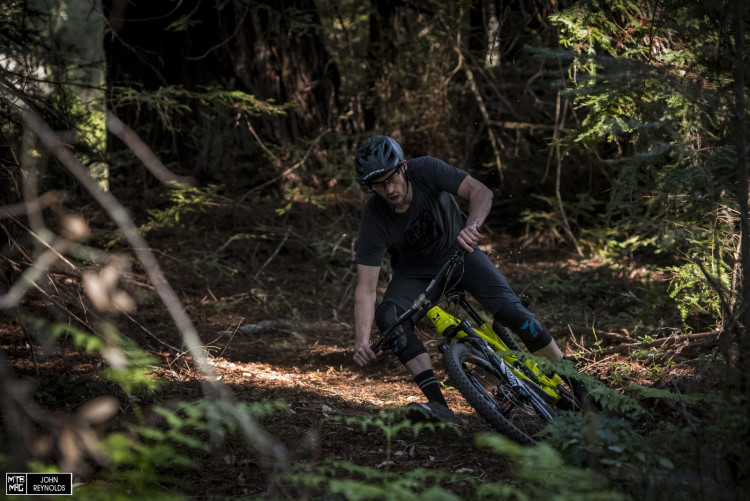 We mainly rode the ENVE M70 Thirty HV wheels in various places in California.  On our Evil Insurgent and on our Turner RFX, these wheels saw a good mix of terrain ranging from fast and rocky, to steep and loamy.  In our time spent aboard the wheels we’ve experienced nothing that we could complain about in terms of strength or durability.

The spokes loosened a bit after a couple of rides, but that is to be expected and after their first re-tension they’ve been good since.  As for the integrity of the rim itself, we feel the HV offering is a big step forward for ENVE.  As the mid travel market develops and riders push “enduro” bikes harder, rims tend to keep getting wider and stronger.  That’s a good thing.

Some time spent testing the ENVE’s this winter on a section of trail at Noble Canyon in Pine Valley, CA

Admittedly, we didn’t have the best of luck with the standard profile M70 in the past and cracked a couple of them a couple of years ago.  According to ENVE they had some issues with the M70 in 2014 but the beauty of having them made in the US is that they were able to halt production and address the issue.  ENVE made a point to convey the fact that the M70 and the M70 HV have identical impact results in the test lab.  The High Volume versions shouldn’t be any stronger, rather they’re designed to support larger tires which inherently provide a bit more impact resistance.  The takeaway point is that the version we used last was faulty and both the standard and high volume M70 are tough as nails now.

Either way, we still bashed the high volume version every bit as hard and rode in very rocky terrain with tire pressures in the low 20 psi range and found them to be a massive improvement over the original M70.  Should you still have your reservations, ENVE backs their products with a five year manufacturer’s warranty and a lifetime crash replacement policy. 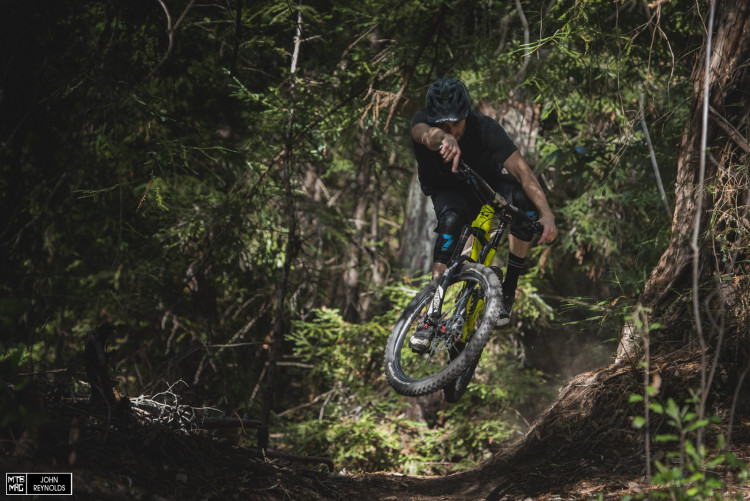 In terms of overall trail feel, the M70 Thirty HV is absolutely stellar and does exactly what a pair of wheels nearing $3k should do.  They’re spry and lively; they take the edge off and dampen the chatter.  They accelerate out of corners quickly and when you slap a turn they aren’t overly stiff to the point that they bite back.

Although bladed spokes wouldn’t be our first choice for a wheelset, they are fast and they’ve held up great.  Should you break a spoke, changing it on an ENVE wheel is a bit of a pain as it requires a special spoke wrench and the removal of the tire/rim strip.  This will likely be a very uncommon occurrence and although it may leave you cursing, it probably won’t need to be done trailside.  We’re confident that these wheels are strong enough that you could definitely wrap a broken spoke around its neighbor and limp home just fine.

We’ve spent just about 5 months on this wheelset and although thus far we have very little to complain about; they’ve shown excellent strength.  In the future we’ll keep you posted on their long term durability.

Our overall section is often where we evaluate the price : performance ratio of a product.  Wheels are a funny thing.  Much like cheap suspension, a cheap wheelset can make your bike feel dead and uninspiring. Conversely, a primo pair can give your bike an edge and make it come alive.  Consumers don’t buy carbon wheels strictly to save a couple hundred grams; it’s also their superior trail feel that appeals. 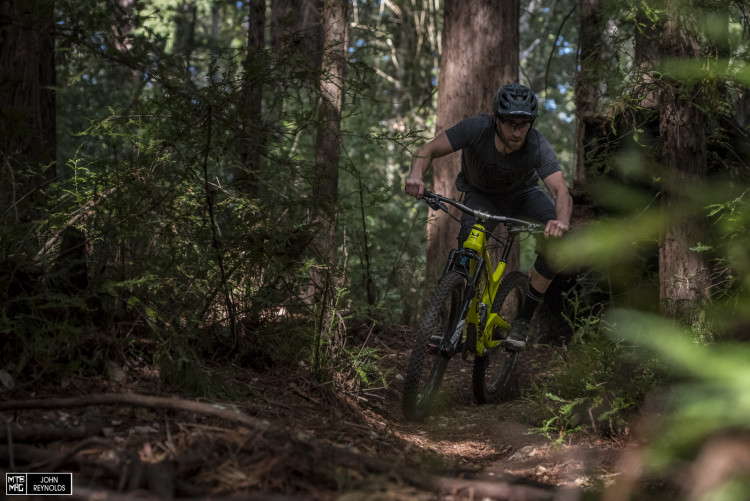 For some, the $2718 price tag could be nearly impossible to justify and that’s understandable.  You can buy a decent complete bike for that and you can also find decent carbon wheels for much less.   However, for others looking for the absolute highest performance products out there, they may not bat an eye before they swipe their credit card.  ENVE wheels have always had a certain lustre about them.  Speaking of that, we almost forgot to mention : they have great aesthetics and bold colors available for their decals; however we opted for black stickers as they’d match better when swapping from bike to bike.

To summarize, here are some musings on the ENVE M70 Thirty HV for your consideration.

• Absolutely top notch ride quality and tire profile.
• Heavier and/or more aggressive riders may want to opt for the 32 hole option over the 28 hole.
• There are plenty of cool hubs on the market aside from DT Swiss and Chris King, so consider buying the rims and lacing up a custom set.
• Changing and truing spokes is a pain on ENVE rims.
• Tubeless setup and tire removal/installation is SUPER easy on these rims.
• ENVE was the first big name in Carbon MTB Wheels. Other brands are catching up & offering competitive products for less coin, but few have similar warranties.
• For the steep price, they should include the 54 tooth DT Swiss Star ratchet.
• The HV profile is a big step forward in strength, durability and ride quality for ENVE in the mid travel market.