[ad3]
A few months back, Ergon sent us their SRM3 saddle to test as well as their new GA2 grips. The German brand has burst onto the scene lately after spending some serious time taking a very different approach at engineering everything from saddle and posts to grips, pedals and even hydration packs. Let’s take a look at how their latest grip has been held up(pun intended). 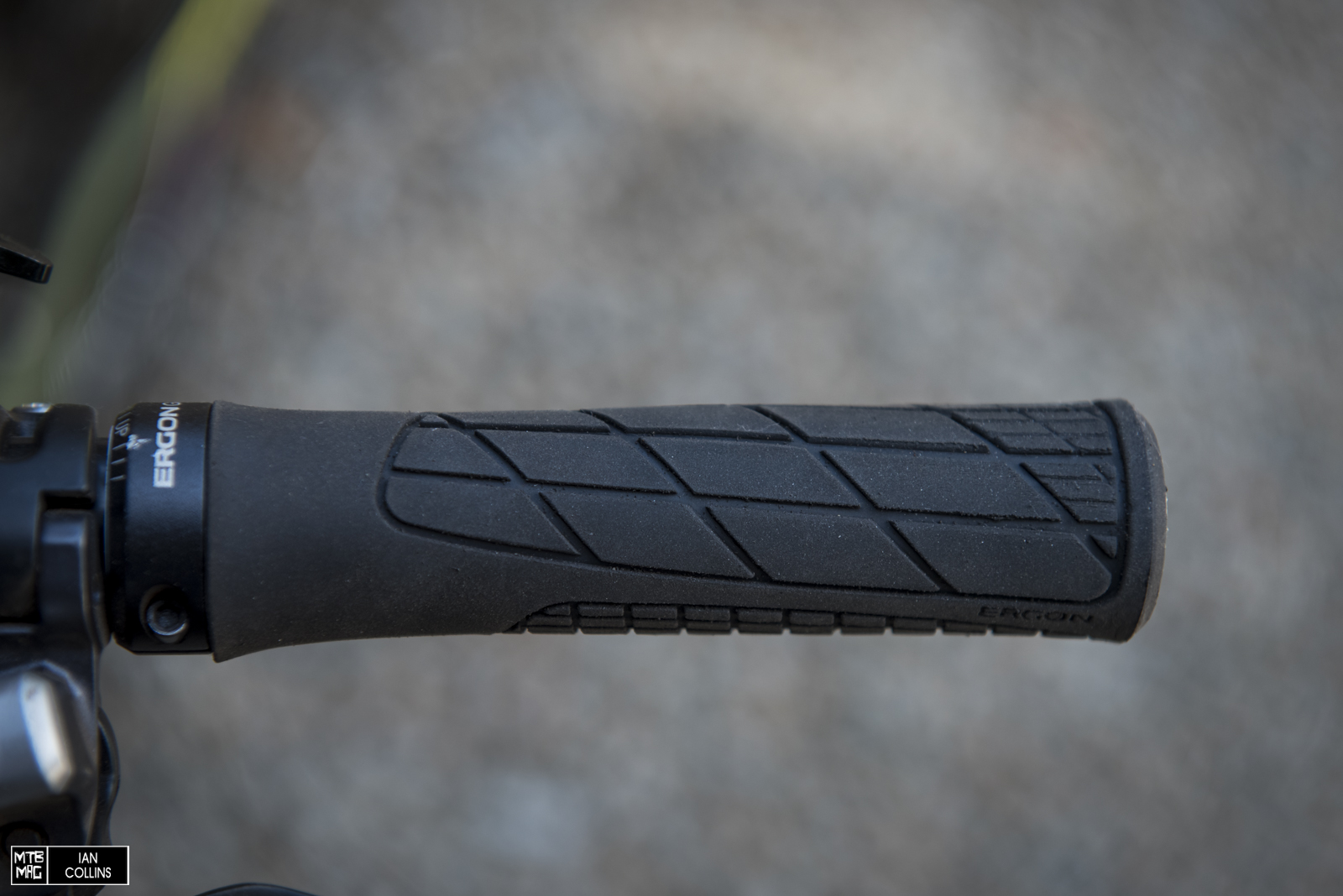 What initially drew us towards this grip in particular is it’s lack of a secondary outboard clamp. We’ve seen a great deal of grips designed this way coming out lately and for riders who like to ride with their hands way out at the ends of the bar, this is nice as the butt of your palm isn’t resting on metal, but rather on soft rubber. 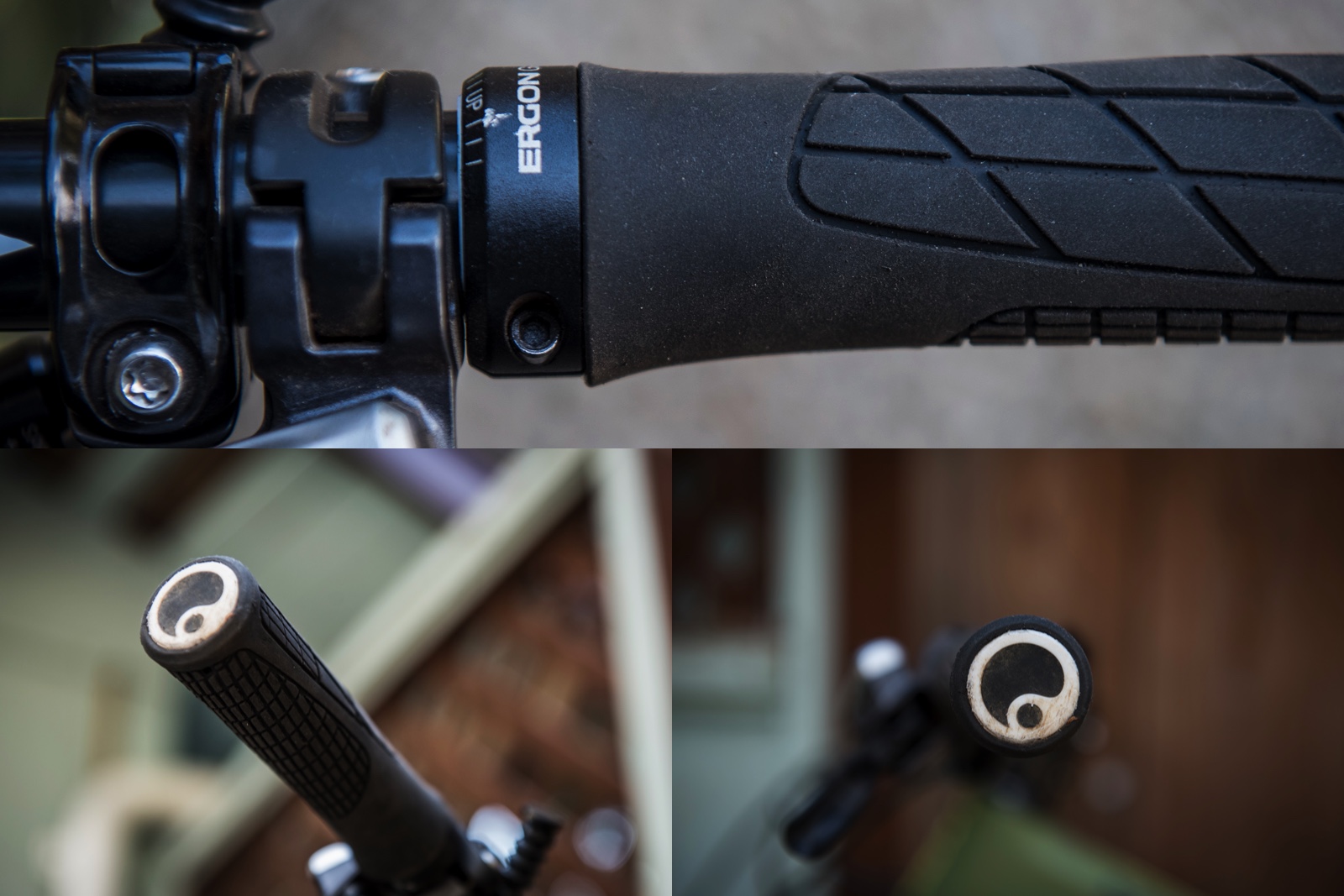 So, a broad but low profile inboard clamp uses a 3mm allen key to pinch the grip against the bar and is etched with an indicator so you know how they should be aligned. The siping on the top of the grip is broad and square edged but not rough. Rather, the grip overall is quite smooth. On the bottom where your fingertips grasp, the siping is more tightly spaced and feels softer/grabbier. At the end of the grips, harder white plastic caps off the end of the bar. The thickness was just right at 30.5mm(measured in the center) but bear in mind they widen to about 33mm at the end. At 135mm wide they are pretty standard in length. That said, they feel a bit longer and roomier because some space is freed up by utilizing only one clamp. Anyhow, let’s see how they rode.

The first thing we noticed while once out riding is that the grips are a bit on the ergonomic side without being funky and oddly shaped. Your hands nestle into the perfect spot but right away they seemed a bit foreign as they were quite smooth. We noticed this less when riding with gloves as opposed to gloveless. That’s not to say it’s a bad thing, but if you are the type of rider who prefers the tactile feel of a bunch of ridges and nubs, these are not the grips for you. 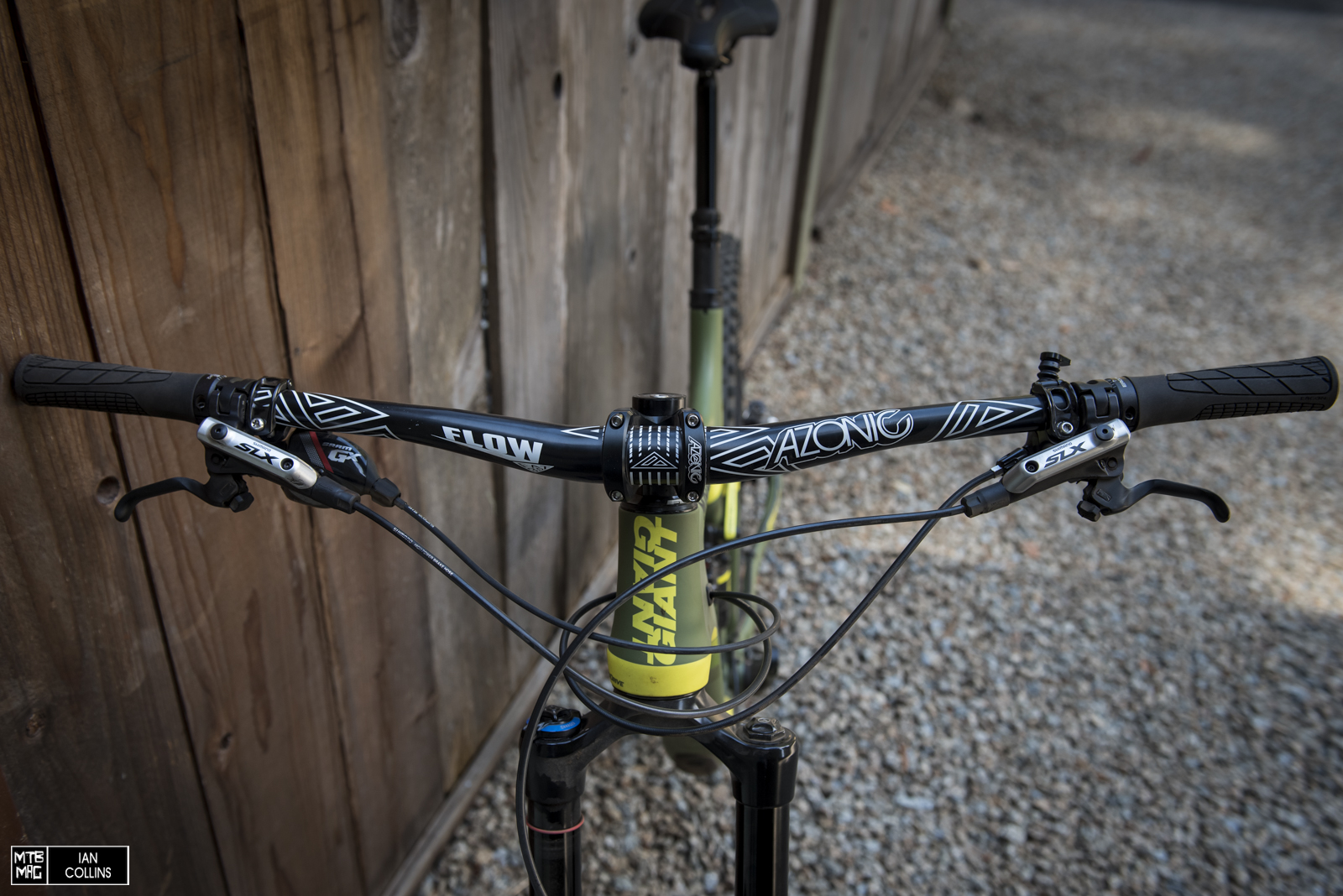 Although we ended up running Shimano brake levers(read : short) nearly butted right up against the clamps, they were still within perfect reach. Over the period of our testing, we found these grips to work quite well in a variety of conditions but concluded they they are best suited to someone who prefers gloves. 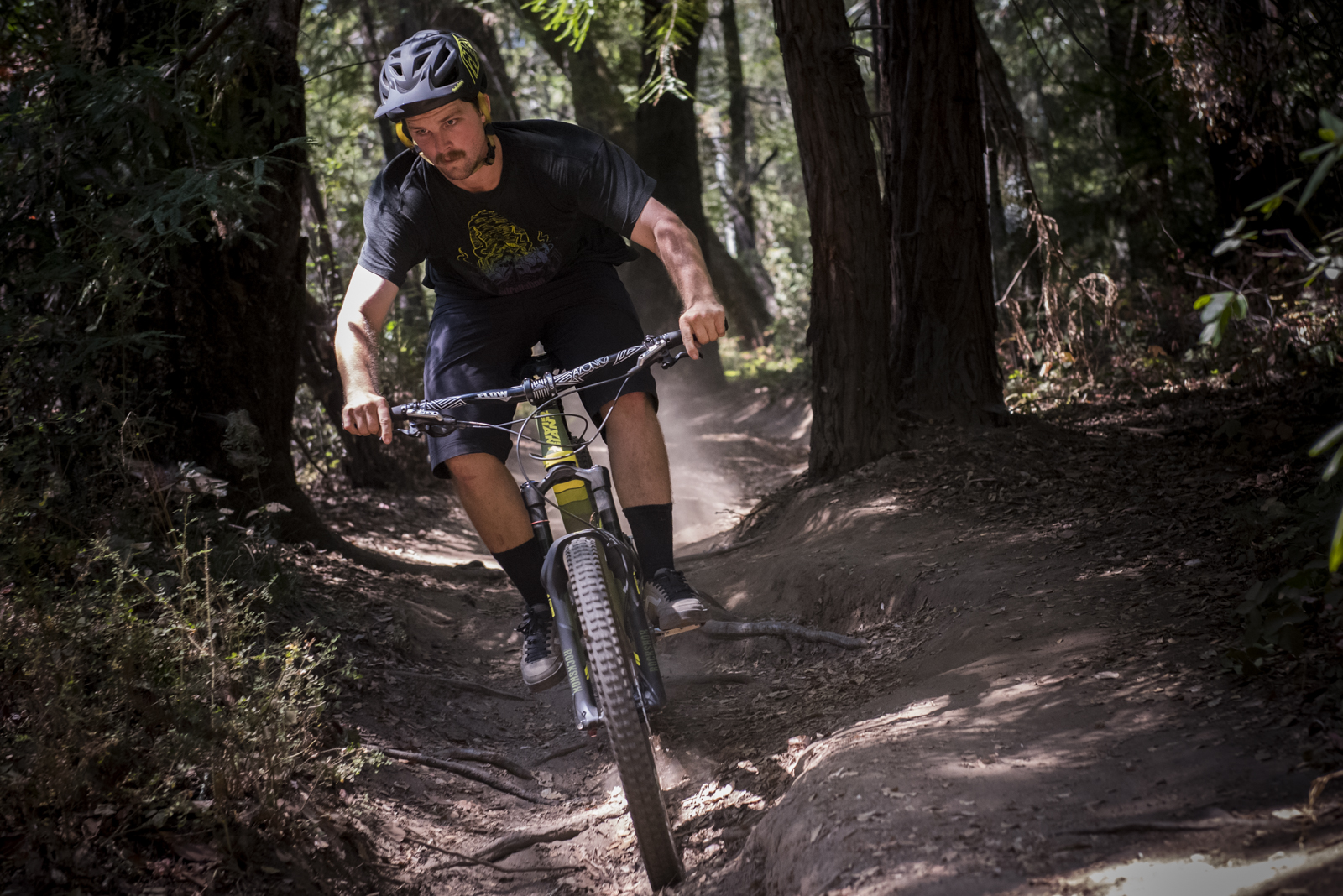 It only took the slightest amount of moisture for them to become unsettling sans gloves. The clamps were absolutely top notch. Under no circumstance did they slip, and the rounded off edges look nice and prevent snagging should you find your hands in an odd position. We really appreciated the lack of the outer clamp, but realize that this is a double edged sword. When that metal outer clamp goes away, the grip becomes more comfortable but also more exposed. The GA2’s hard plastic cup that protects the bar end did a fine job, but after a few small crashes the grip itself separated slightly. This happened some time ago. The grip is still holding up fine and feels as good as new while riding. 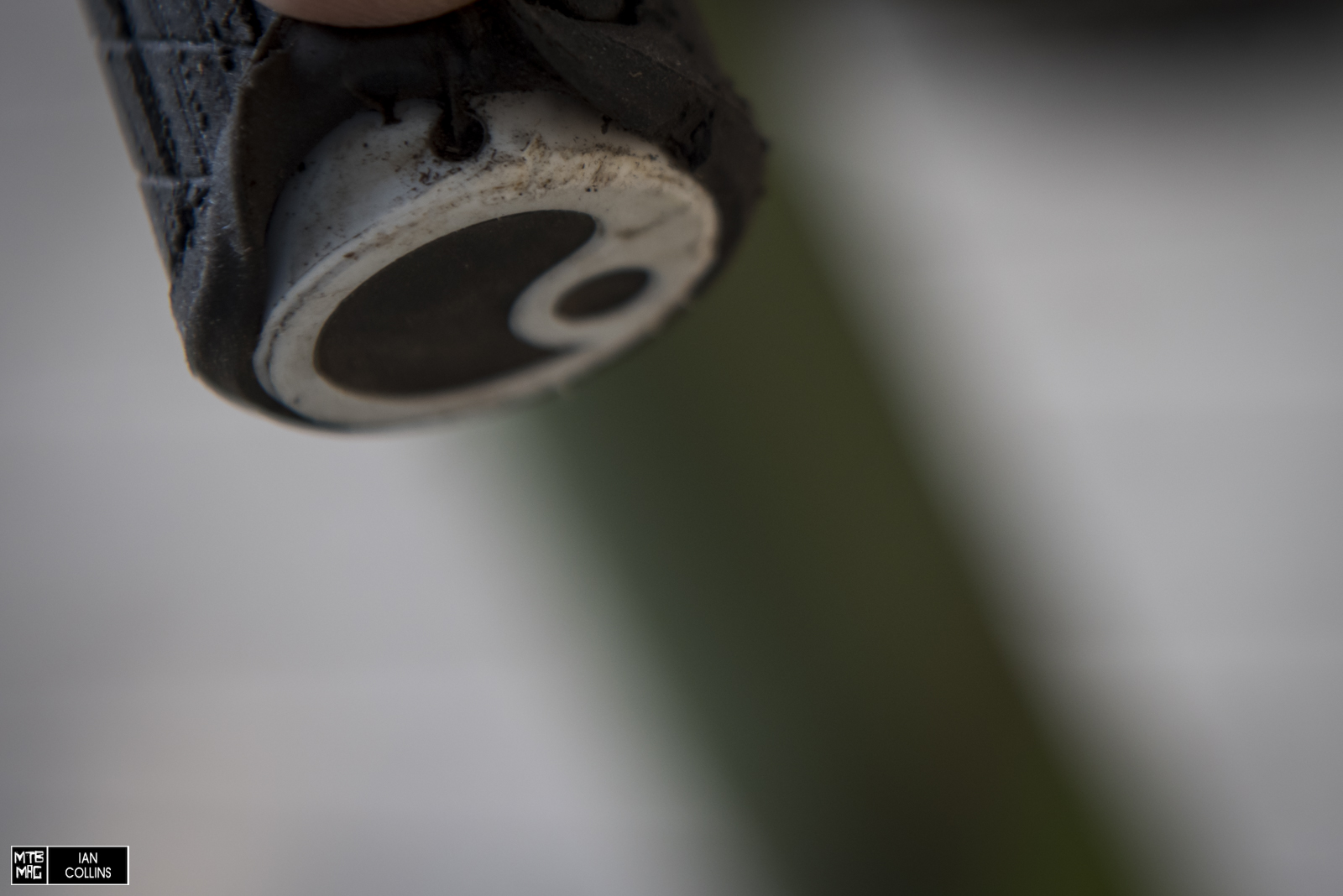 The bottom line is that if you tend to crash a lot and you’re a penny pincher this might not be the grip for you. If you change your grips frequently and don’t mind running the risk of them getting banged up then give these a try. We wouldn’t sign off on them for riders always finding themselves in the rain, or for the gloveless crowd, but for everyone else, we think you’ll be pleasantly surprised by their non conventional design.